Strap yourself in and tape up the windows ‘cause Ground War has come to War Mode. If you’re unfamiliar, Ground War expands matches from standard 6v6 affairs to 9v9 bouts of exhilarating mayhem. You’ll have more teammates. You’ll encounter more enemies. The tide will turn an impossible number of times. All by simply adding three players to each team. This six-player difference shifts the meta, game-within-the-game, in specific areas that are worth considering before diving headlong into the 9v9 War Mode Experience.

To aid you in making that jump from 6v6 to 9v9, we’ve highlighted some general ideas to keep in mind. These ring true to us and we’ve selected specific examples of when these themes reveal themselves in tangible ways during matches. 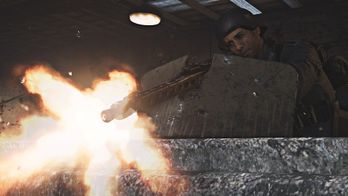 On Part I of Operation Neptune, you’ll have enough people to man each of the LMG nests and still have four teammates to freelance. This frees up almost half your team to protect the center lane, snipe from the shadows of the A bunker and keep an eye on the buildable ladder on the far side of the ‘B’ bunker. Pushing through the water to the beach is already a tall task for the attacking side, but with four freelancers and all five LMGs ripping rounds into the rocky sea? Wish them luck. They’ll need it. 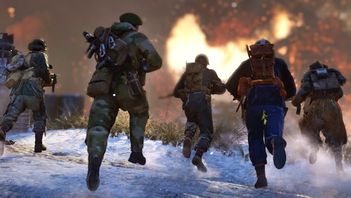 The same math that should make defending easier means precisely what you’d think for the attacking team. If you’re attacking, you’d better be ready for an unprecedented level of defense. Your tactics need some forethought. Throwing bodies at an objective will only allow your opponents to rack up historic numbers of kills. It won’t be easy, but you can utilize your extra teammates to thwart the defending advantage.

Take Part II of Operation Breakout, for example: you have to build a bridge. Even with six defenders, this ain’t exactly an easy ask – particularly because you’ll often find teammates more interested in sitting back and sniping rather than pushing the objective. But, with a bigger squad, those snipers can function as a crucial aspect of your attack.

The enemy will have the bridge covered from every conceivable angle: every window, every piece of cover, there’s no hiding. To counter this, have overwatch posted up in the 2nd floor window, behind the tree and on each side of the bridge. This will occupy, let’s say, five players. That means you have no less than four teammates who need only be concerned with chucking Smoke Grenades on the bridge, diving on it and building until they get shot. Once the first wave of builders gets taken out, you have two options. The overwatch can simply maintain their positions and let the rushers get back out there. Or, if you want no letup, have the snipers cycle forward into rushers and let the recently killed rushers take up cover fire. Rinse and repeat until that bridge is built.

Coordination Is Even More Important

As you can tell, tossing an additional three players on each side into War Mode ratchets-up the fury of an already chaotic mode. Because of the difficulties and differences we’ve laid out, it becomes even more important for you to coordinate with your teammates. Whether you’re attacking or defending, map control wins matches. Communicating with your teammates allows you to intelligently deploy your team’s resources in a way that maximizes your chances to either take an objective or withstand an assault. Whether you’re attacking or defending, streaming into an area one player at a time is a losing strategy. Strap on those headsets and get to know your teammates. Simply calling out what you see can be the extra bit of intelligence your teammates need to push you into the win column.

Ground War’s a big, furious way to experience Call of Duty®: WWII. Throwing War Mode into a 9v9 context just elevates an already unique, exciting experience. So, get in there before it goes away on May 8th at 10 AM PT and learn what it’s like to battle with an entire baseball team on your side.