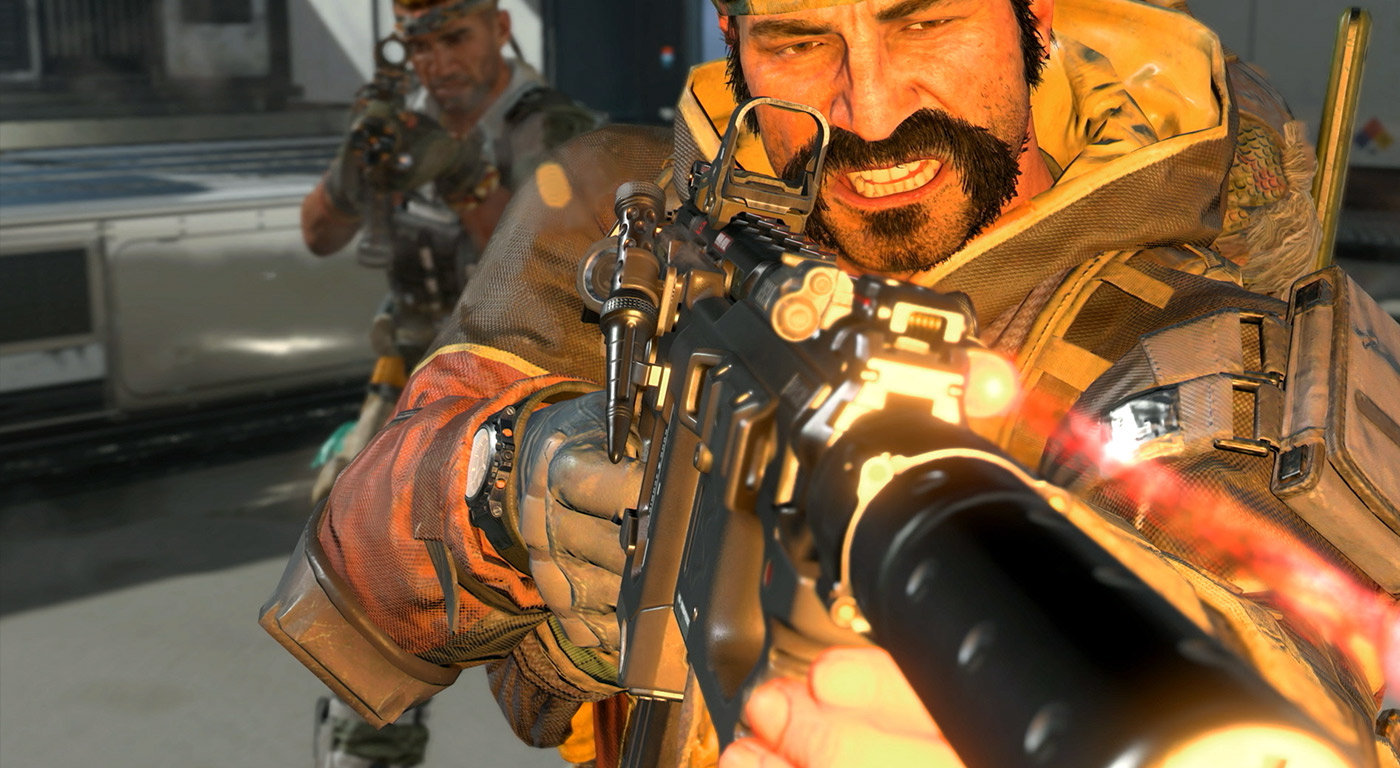 Black Ops 4 comes with a truckload of new: weapons, gear, Specialists and the reason you’re here right now: Maps. New, dynamic gameplay demands new, dynamic combat zones and we’ve got the goods on all 14 of these new fields of battle – some of which you may recognize from previous Black Ops. To help you get acquainted with these places, we have a few pointers. Read on. 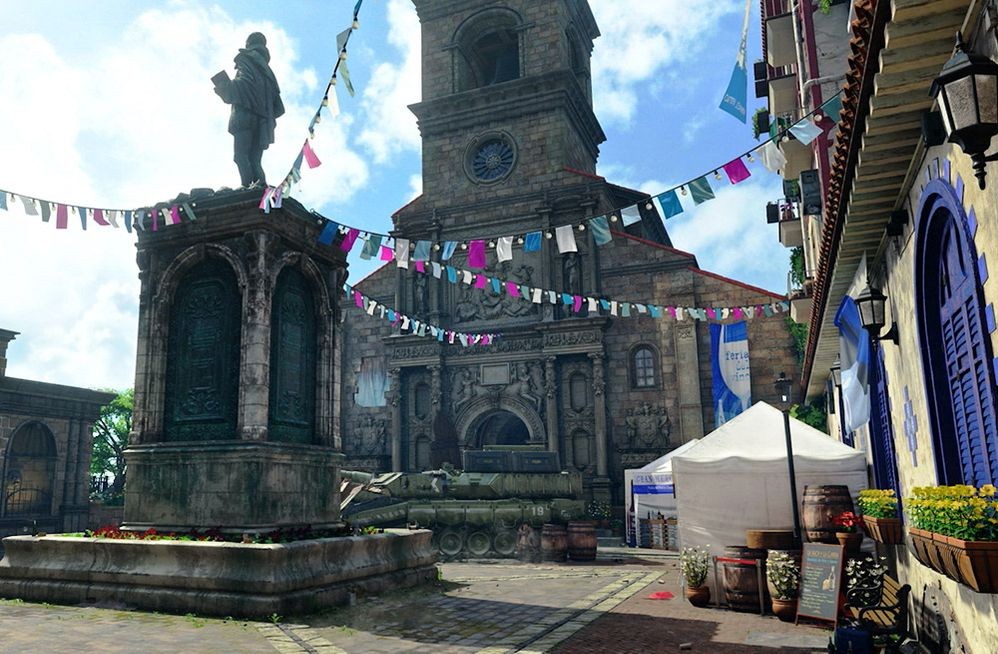 Atop the cliffs overlooking the sea sits a quaint Spanish town where the lanes are narrow and the central square in front of the church plays host to frenzied battles on the ground and from second floor overlooks. An intense Multiplayer battleground, Seaside’s stunning visuals belie its role as the setting of a violent anti-government uprising. It plays fast with a central lane sloping from west to east, taking you past a water fountain and through a church. Narrow paths on either side escort you through wine cellars, coffee shops, and delis in this idyllic coastal town. Keep an eye out for incoming foes from the northern-most edge, where flankers risk traversing the tiled roofs just inches from plummeting into nothingness. Amid the tight confines your teammates will appreciate Recon’s Sensor Dart helping locate enemies as you fight from street to street.

Rebels shooting down government aircraft over a dense, Moroccan village is the backdrop of the heavy Multiplayer action in this map. Numerous staircases in all parts of the map give the action an added degree of verticality. The central square sees a heavy dose of fighting with elevated vantage points in buildings, atop stairs and vendor stands. For longer-ranged engagements, there’s a long lane to the north with crates strewn throughout for cover. This map plays to mid-range strengths in terms of weapons and playstyle. For the rushers, Ruin’s Grapple Gun is spoiled for buildings and surfaces to latch onto and Nomad’s Mesh Mines can make life miserable for flankers. 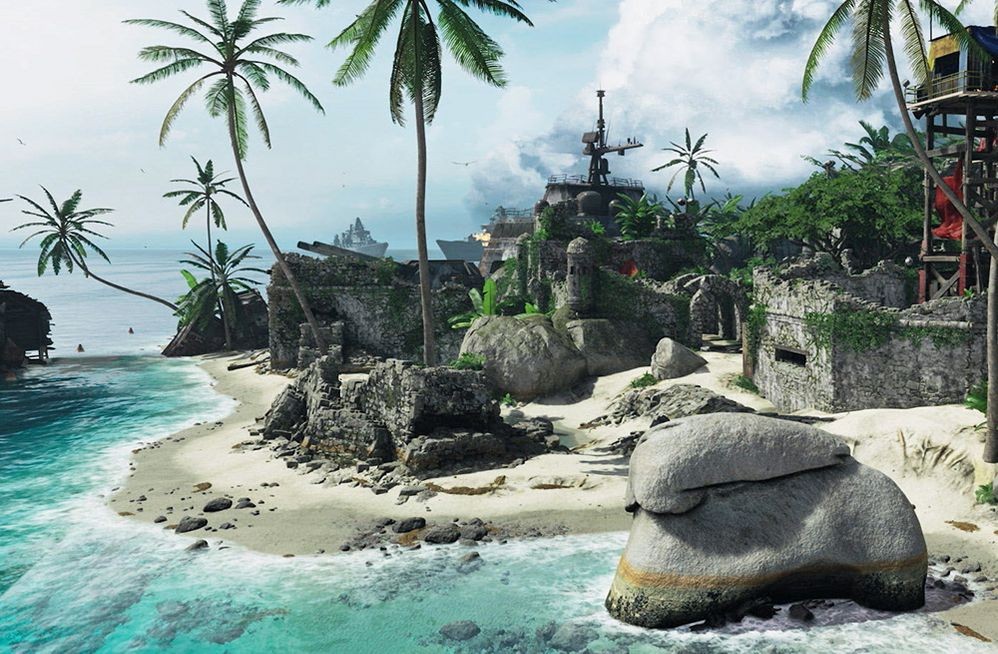 On an uncharted island off the coast of Colombia, water is pretty much everywhere. Navigating the southern shore, a wise operator will make use of the water as cover, as well as the discarded crates left behind by international arms smugglers. A narrow channel of water snakes through the center of the map, underneath the central bridge, to the northern jungle. This is your quickest route to navigate from one objective to the other, or simply to hop from your spawn back into the fray. With so much water, it’s not shocking to learn that the bridge is often the focal point of the action. A stack of supply crates makes a fine place to deploy Ruin’s Grapple Gun/Grav Slam 1-2 punch – it will clear the center of the bridge, which just so happens to be the ‘B’ point in Domination and one of the Hardpoints.

Summit
Set in a blizzard, atop a tightrope-thin range along the USSR’s Ural Mountains, Summit gives a frosty context to Multiplayer mayhem. Take to this Soviet snowscape and revisit the setting that hooked the world on Black Ops, as you fight and flank your way to victory. Surrounded by steep drops into sheer nothingness, Summit works well for varying playstyles while drawing players to the highly contested map center for engaging gunfights. 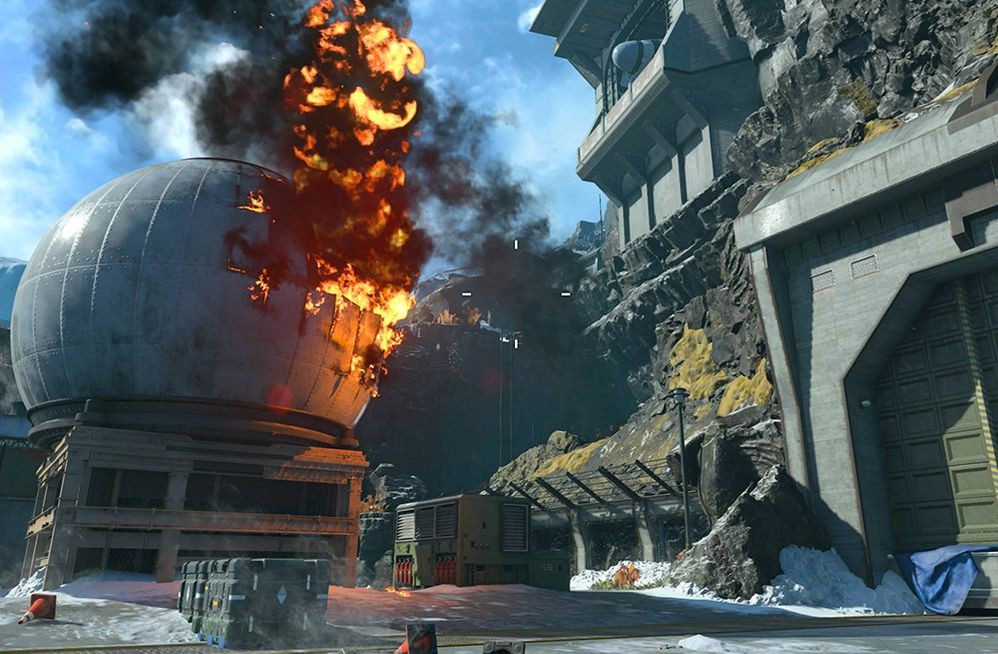 In the world of Black Ops, finding a classified, defensive ICBM launch facility nestled among the snowcapped Icelandic mountains isn’t terribly surprising. But when hostiles infiltrate it, attempting to steal a nuke? Well, that launch facility just became a battleground called Payload. To avoid the chaos of the large, central structure, careful navigation of the northern edge leads down a narrow lane with a deadly drop to your side. Cutting south through the middle of the large hangar, you’ll navigate through the center of the action with multiple levels of verticality to ambush opponents. Objective modes require a defense from all sides and Torque’s Barricade and Razor Wire make excellent deterrents to protect your six while you’re capturing ‘B’.

Slums
From Black Ops 2, set in 1980s Panama, the small but focused Slums map challenges players to face the enemy head on. SMG gunners and equipment-heads alike will find rewarding gameplay along the urban, war-torn streets, which are home to an abandoned laundromat, a desolate parking lot and a central square that hosts point “B” in Domination. Slums makes for a classic face-off-style battle, as enemy teams duck and dodge to see who dominates first. 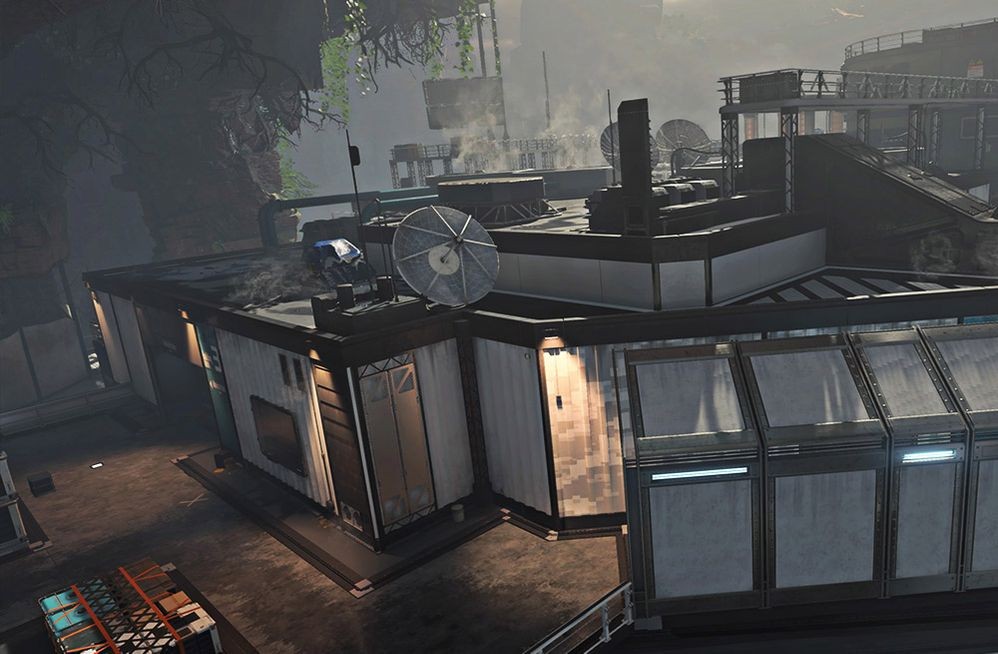 A covert listening station deep in the mountainous region of the Hunan Province provides a remote base for a global strategic surveillance program. The structures and ledges of that base make up the Frequency map, primed for a wide range of engagements (including the added danger of falling off a ledge into the valley below). As you head from your spawn toward the map center, you’ll find two distinct levels of engagement. The top level consists of an open, central area with two ladders leading to the lower level. To the east and west of those ladders are opposing command centers with second floor windows. The lower level to the south provides long sightlines as well as tight corners from which you can pounce on overly aggressive enemies. Those corners make a fine area for Nomad’s K-9 to patrol or his Mesh Mines to deploy and take down enemies venturing towards your team’s half of the map.

Firing Range
This throwback, close-quarters Black Ops map is set in a CLASSIFIED military facility designed for training exercises. With narrow vantage points, small houses and sheds, and a central tower, Firing Range is a hot, dry arena primed for fast-paced skirmishes, heart-pounding competition, and a range of combat styles. 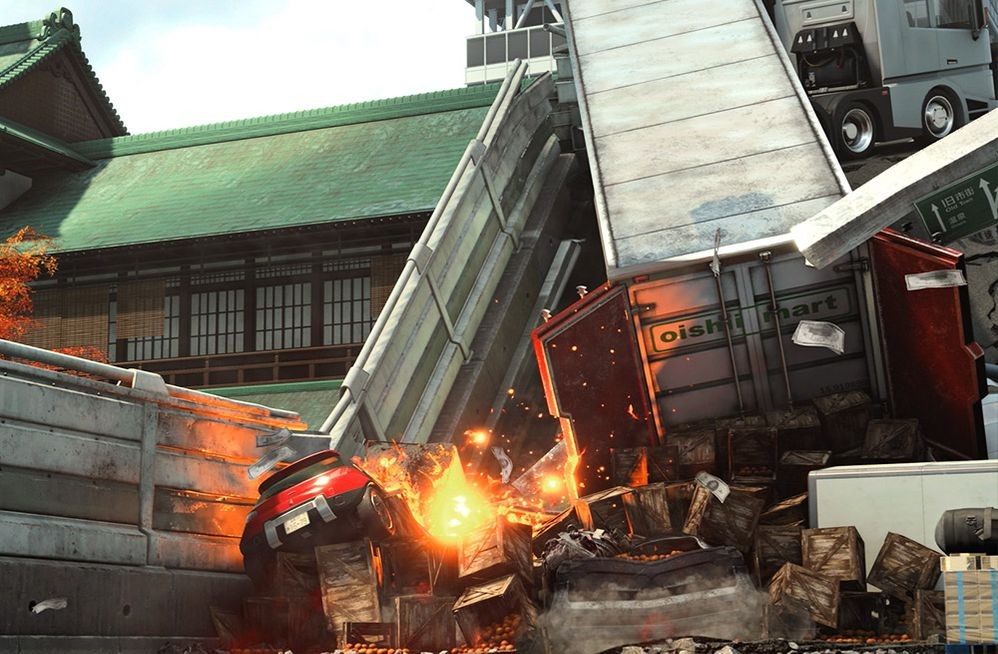 Much more than “bad traffic,” Gridlock is set in the aftermath of a violently-foiled bank heist in a dense, urban environment, packing a wide variety of engagement opportunities among urban highway devastation. Sprint up a downed road sign for an elevated view of the open central area for longer ranged engagements. Traverse through the buildings and outer flanks for more medium-to-close range gun fights. These varied sightlines and spaces mean when you whip around a corner you could get blasted away by a Shotgun from inches away or by a Sniper Rifle from 60 yards away. To avoid these surprises, we like to have Ajax around to push ahead with his dangerous and defensive Ballistic Shield. If you’re storming a building, toss in that 9-Bang first to give foes the dizzies before the Ballistic Shield comes in for a taste. 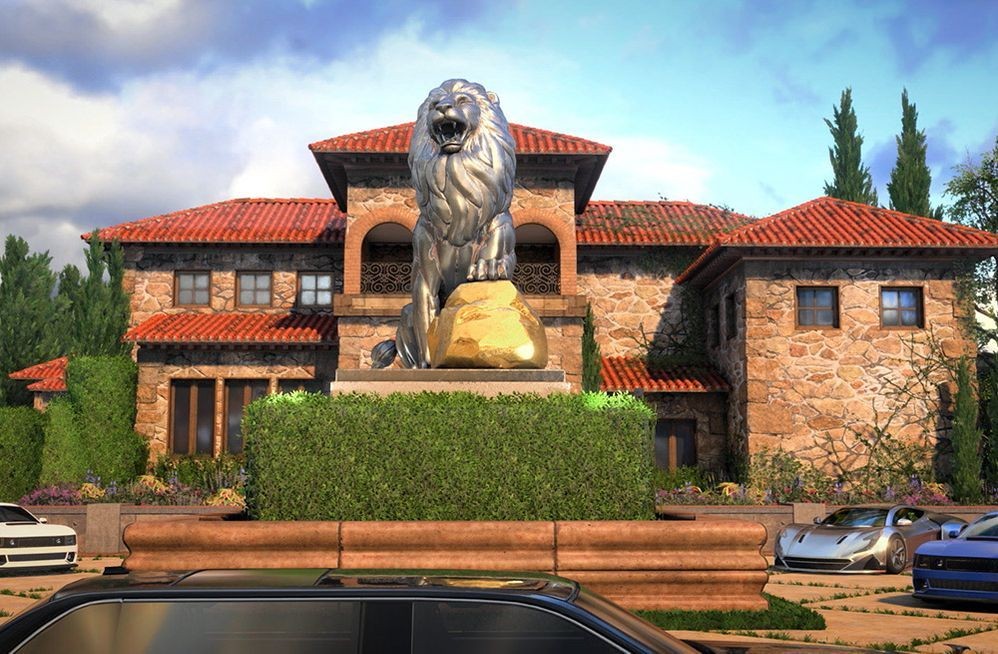 This lakeside Spanish villa is home to the head of a criminal organization. Spawning on either side of this palatial estate, you navigate through one of three distinct routes. Hacienda’s center lane passes through the heart of this spacious two-level home with a large courtyard accented by a water fountain in the center. A vineyard-lined flank on one side makes for a partially protected route for dodging the chaos inside the house. On the other side of the main house, the water may provide a protected path from ‘A’ to ‘C’ in a Domination match – and also reveals an unfortunate soul who mistakenly wore concrete shoes to go swimming. The ‘B’ point in Domination and one of the Hardpoints centers around the fountain, so enemies tend to congregate there. Clearing them out can be a chore, but that’s where a Specialist like Firebreak has the opportunity to thrive: throw down a Reactor Core to stun and damage enemies, and then finish them off with the righteous flames of the Purifier.

Militia
Navigate in and around a rural compound of Russian-backed anti-government extremists deep in the Alaskan wilderness near the Bering Strait. A dirt path leads you around the edge of the map with abandoned vehicles littered throughout. Cutting through the center of the map, a dried-up creek bed is flanked by a small church to the south side and two multi-leveled cabins to the north. Don’t think that creek bed is safe, however, a covered bridge has multiple openings for scopes and Tactical Rifles. This militia is prepping for the worst as the interiors of the cabins lead down to underground bunkers full of weapons, ammo and food stacked to the ceiling. These underground areas and cabins make for tight spaces where SMGs play well. 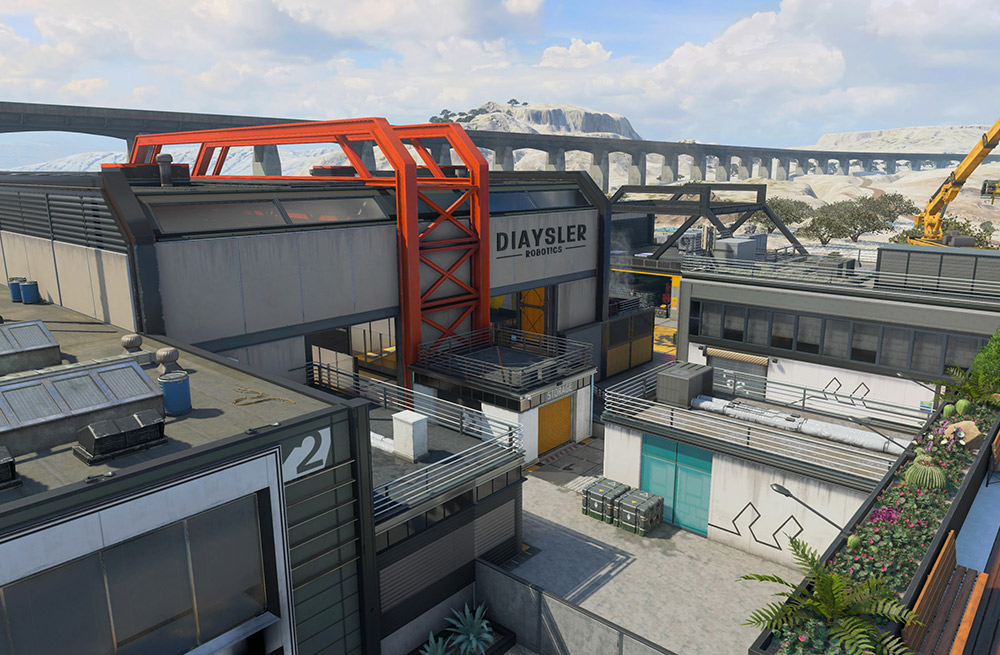 A military defense contractor's cutting-edge North American weapons manufacturing facility is the target of a hostile covert op in the setting of this map, Arsenal allows for maximum variety in your engagements. Jump from lane to lane through narrow pathways for close-quarters action. Be sure to check your six as you blast your way through the wide-open central structure, there are numerous entrances. For long sightlines, stay outside the building and you’ll find all the space you want on to the north and south of the building. Any playstyle and Specialist can thrive on Arsenal, it all just depends on how you navigate the map.

Icebreaker
Battle in the snowy tundra, frigid water and broken-in-two submarine of Icebreaker. Upon being forced to the surface, this long-lost US nuclear submarine smashed through an iceberg making for a cold, wet central area of this frosty map. Flank through isolated, icy routes on either side of the sub to get the jump on an enemy spawn area. The interior of the vessel provides understandably small spaces – it is a submarine, after all – for fiercely-contested, very intimate combat. If you want to dominate that sub, Firebreak's flames and Torque's barriers make quite the devastating combination.

These 14 maps provide for exciting, varied and – above all else – frenetic gameplay that suits the Call of Duty® fan inside of us all. Pictures and descriptions of these places are just to whet your appetite. So, log in, Pick 10 and explore the virtual combat arena that is Black Ops 4 Multiplayer.