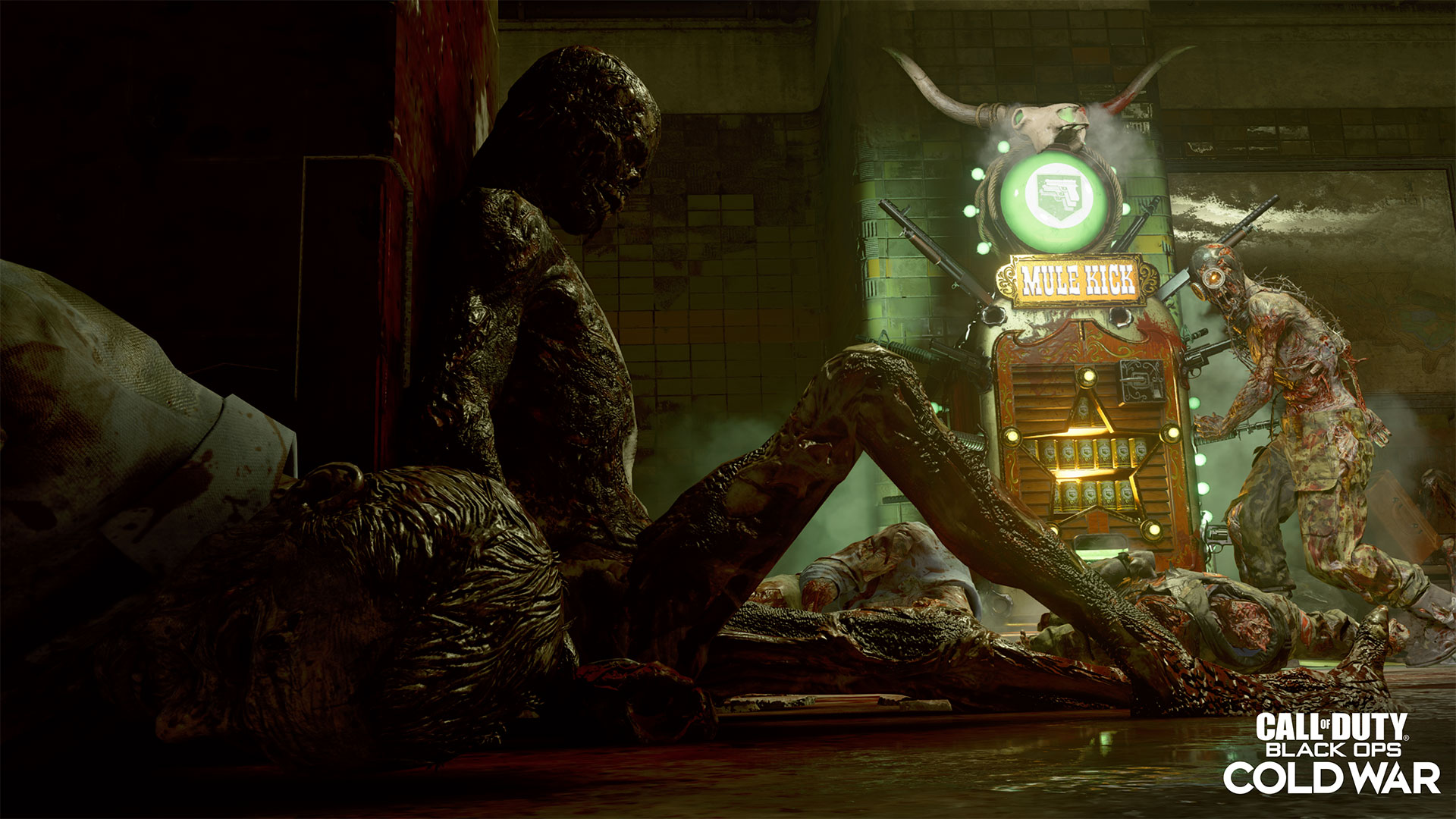 “Across the fields, across the plains. He ran so fast he dodged the rain. He was El Burro! He hurried in to save the day, gun in hand, and thrice they say. He was strong like a Mule, he was stubborn like a Mule, he even kicked like a Mule, El Burro!” – Excerpt from original Mule Kick jingle, Call of Duty®: Black Ops

Saddle up and prepare to down some Mule Kick Perk-a-Colas, partners, because in (and under) the wild streets of “Mauer der Toten,” two weapons may not be enough to deal with the undead threats waiting for you in Berlin.

When the sun rises on Season Four Reloaded on July 15, Mule Kick will get its own new-and-improved machine in “Mauer der Toten,” complete with enough live-firing armaments to restock an army. Mule Kick will also be stocked into every Der Wunderfizz machine inside the world of Call of Duty: Black Ops Cold War Zombies, including “Die Maschine,” “Firebase Z,” and all six current regions in Outbreak.

As every night draws us closer to doing the dirty work of Omega Group, let’s learn about the Perk that may save us – and maybe even Raptor-1 – in Berlin: 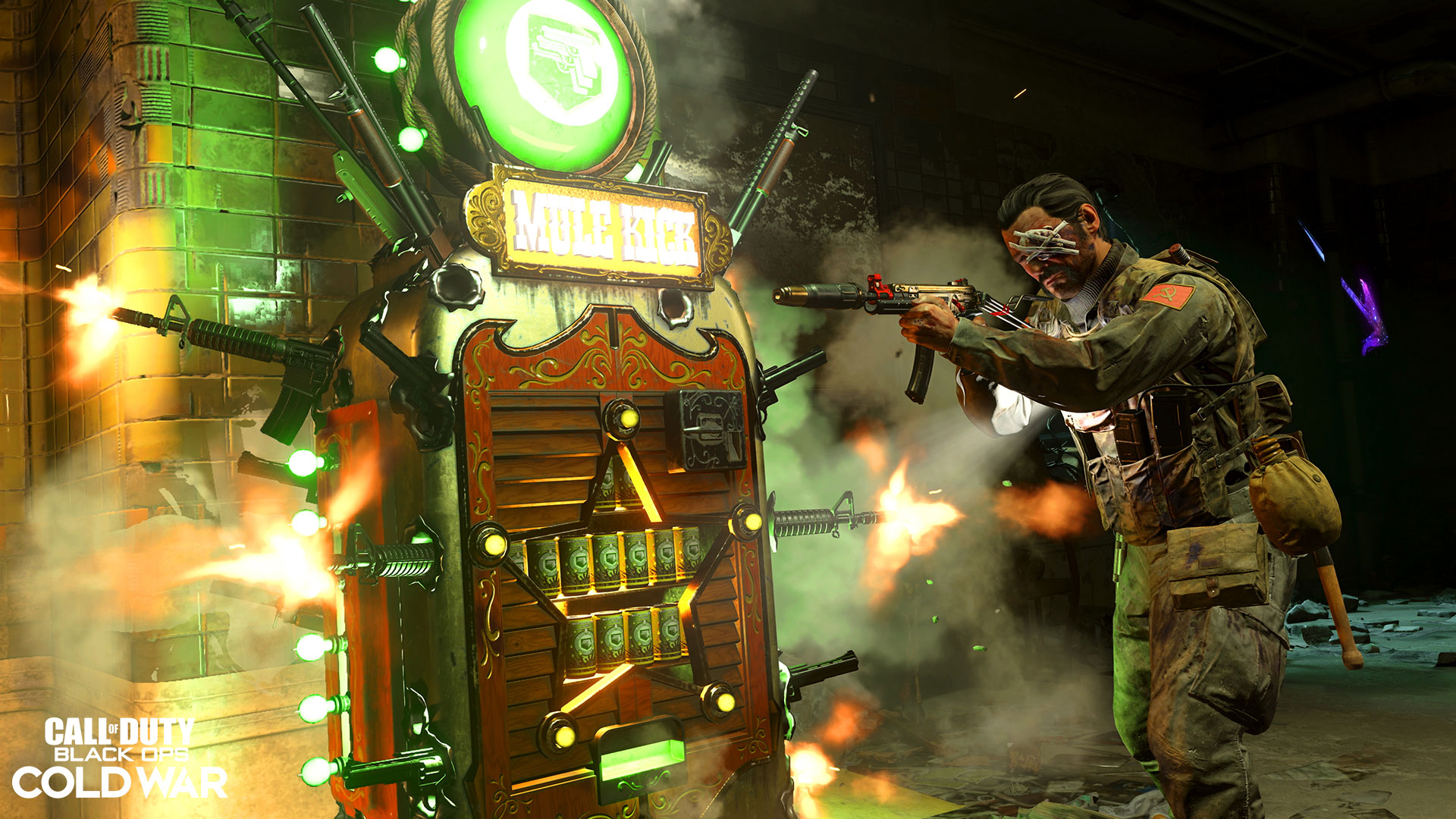 First introduced on the legendary Black Ops Zombies map “Moon,” Mule Kick gives players the ability to carry three weapons in their loadout as opposed to the standard two.

After sipping a Mule Kick and picking up a third weapon, players can cycle through three weapons either by using the default “swap weapon” command or, if a keyboard is being used, separate keybinds for all three weapons. If you lose Mule Kick, you lose the additional weapon that was picked up (unless you’ve upgraded this Perk, as explained below), so ensure what you can afford to lose is kept in that extra slot.

And that’s just the base version of Mule Kick without any upgrades. What impact does a third primary weapon have on your zombie-slaying abilities? Here are just five of the many scenarios where having that third weapon comes in very handy:

1. Variety is the Spice in Mule Kick. Couldn’t decide between a powerful sniper rifle to destroy Elite enemies or a bullet-hose SMG for hordes to complete your two-weapon setup? Worry no more. With Mule Kick, you can have those weapons in addition to your starting weapon available for use.

2. Wonder No More. Taking a Wonder Weapon often means replacing your primary loadout weapon or another powerful standard weapon you’ve found during your mission, which could mean all that Essence and Salvage put into Pack-a-Punching or upgrading it goes to waste. With Mule Kick, you can keep your upgraded weapons and still be a quick swap away from the game’s most powerful armaments.

3. A Tool for the Hunt. In Zombies, certain objectives or quests require a specific weapon or weapon type to unlock next steps; think a sniper rifle for hitting a small target at long ranges, or a shotgun for rapidly bursting open an Aethereal Orb in Outbreak. A single Mule Kick and an additional third weapon are more likely to do the trick in either case, and in a multitude of other combat situations where you’ve got a craving for more firepower.

4. Elemental Fusion Powers, Activate! With a third weapon through Mule Kick, you can have up to three different types of elemental damage to dish across your weapons. In other words, when it comes to fighting undead creatures with multiple elemental weaknesses, you’ll have so much elemental energy, Dr. Peck would lose his other eye trying to replicate it.

5. In Solos, You Become a One-Agent-Army. Mule Kick becomes a serious must-have refreshment in Solo outings, where it’s just you facing off against the undead. Being able to cover even more combat scenarios with an additional weapon in your loadout is a game-changer, as you can easily have a close-quarters battle option (e.g. Melee weapon), a mid-to-long range tool (assault rifle) and a big game hunting armament or a Wonder Weapon.

And this is all before we upgrade our Mule Kick with some Raw, Refined, and Flawless Aetherium Crystals… 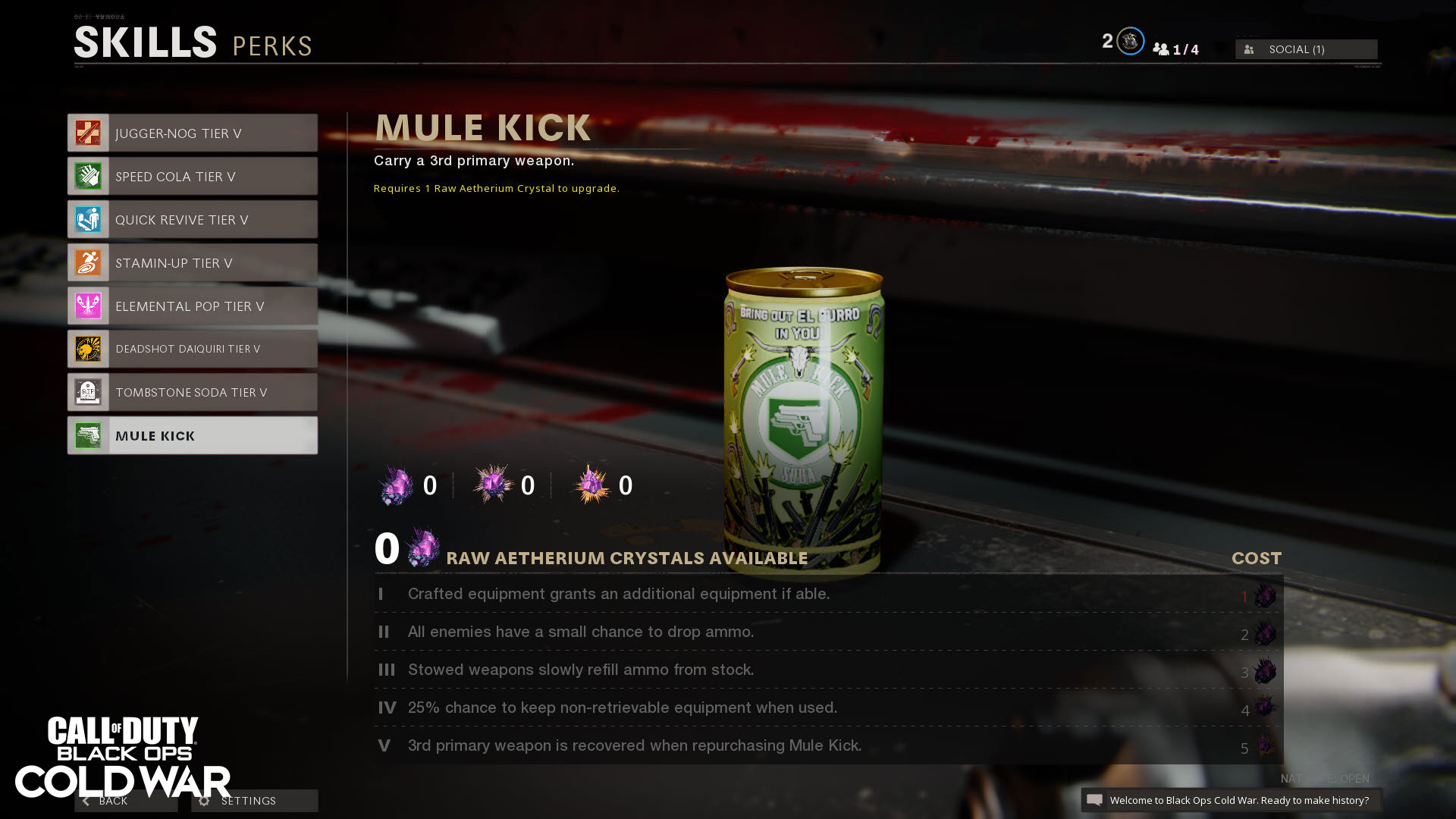 Here’s why each upgrade makes this Perk a truly powerful force in Zombies:

I. Crafted Equipment grants an additional Equipment if able.

Every time you go to the bench with hard-earned Salvage, you’ll get two Equipment pieces for the price of one. That means double grenades, double Decoys… and yes, double Monkey Bombs, making this first Skill upgrade an incredible start to Mule Kick’s advancement path.

II. All enemies have a small chance to drop ammo.

While enemies already have a chance to drop ammo in Outbreak, this wasn’t the case for round-based Zombies maps... until now. Once you upgrade Mule Kick to Skill Tier II, the odds of finding ammo on zombie corpses will be in your favor on “Die Maschine,” “Firebase Z,” and “Mauer der Toten.”

Picture this: in the middle of a boss fight, you frantically fire your Ray Gun down to a single charge with more in the reserve, but you don’t have Speed Cola to quicken its reload. At Skill Tier III, Mule Kick will provide the additional benefit of refilling its magazine from its available stock, allowing you to swap to one of the other two weapons temporarily, then bring that weapon back out once it’s topped off.

Remember those double Monkey Bombs you just crafted as part of Mule Kick’s Tier I upgrade? You now have a chance to keep one of them – or any Equipment, outside of the Tomahawk and C4 – after its use. This may be incredibly helpful if you have the new LT53 Kazimir grenade, which works wonders on “Mauer der Toten.”

Normally, when you lose Mule Kick, your third weapon is lost with it. With this upgrade, that weapon is called back whenever you chug another Mule Kick. An incredibly valuable end to an outstanding Skill Tier upgrade path, to say the least!

Mule Kick will fundamentally change the way you play Zombies come July 15. Even on its own, without any other Perk-a-Cola combinations in mind, this old-fashioned cocktail has enough bite to help you deal with those that bite back.

And that’s just one change to the overall Zombies meta coming with Season Four Reloaded – be sure to stay tuned for Treyarch’s full patch notes in addition to more Zombies articles leading up to and through the release of “Mauer der Toten.”

Call of Duty®: Black Ops Cold War and Warzone™ will have Double Battle Pass XP live from now until July 12. To celebrate the upcoming midseason occasion, and to look forward to “Mauer Der Toten,” we have some Zombies tips and a breakdown of an LMG that will help you smoke the competition.