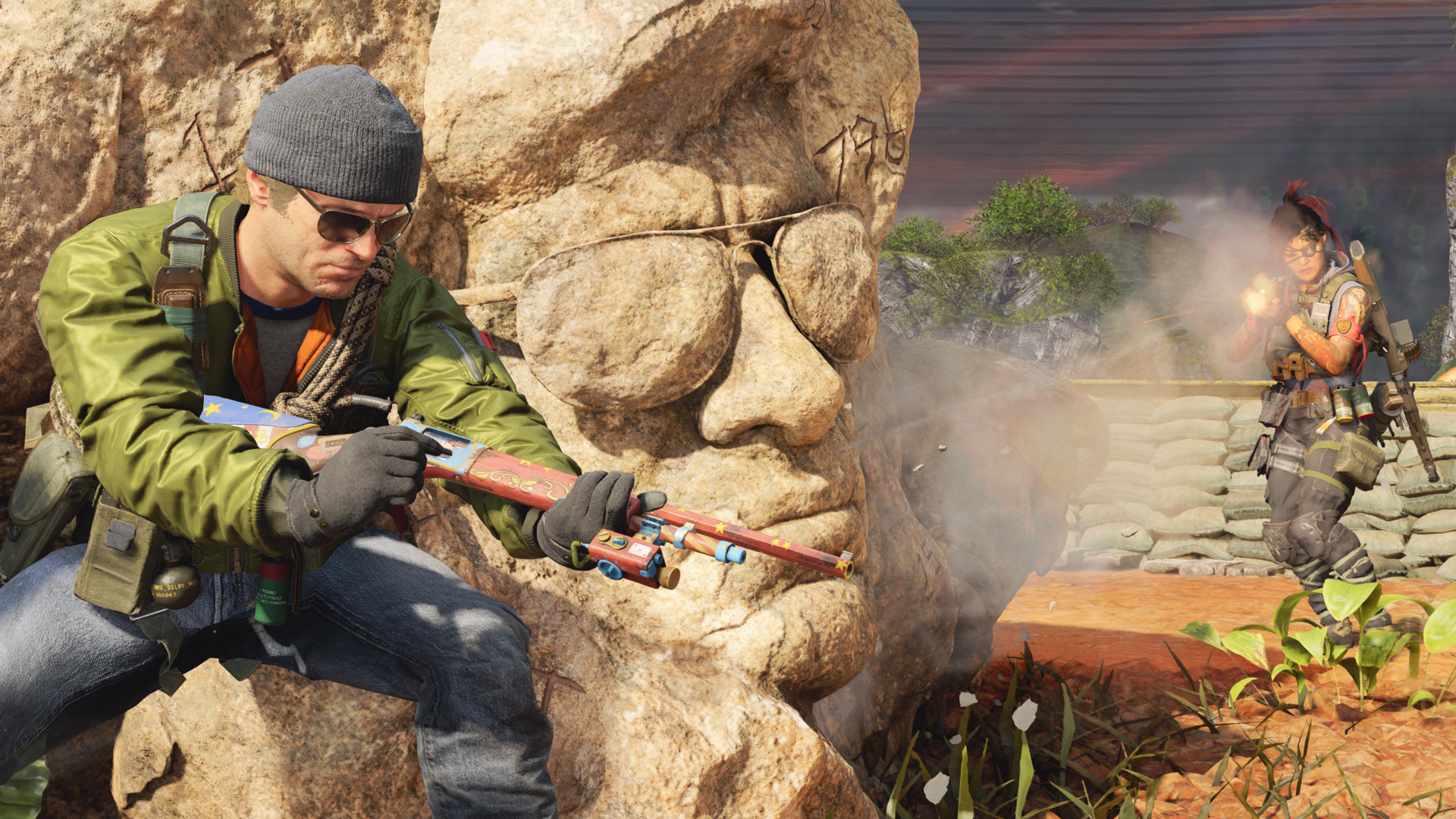 Despite being rescued from Stitch’s clutches, Adler is in bad shape after his exposure to the Numbers Program. Now, in an effort to bring him back, Alex Mason has returned to administer the same interrogation techniques used on himself years ago.

Enter Adler’s broken mind as his fragmented memories merge into one of the most unique map experiences ever developed for Call of Duty Multiplayer. Joining the 6v6 map rotation for free as part of Season Six of Black Ops Cold War, Deprogram will test not only your combat skills, but also the very state of your mind. Here’s what we know: 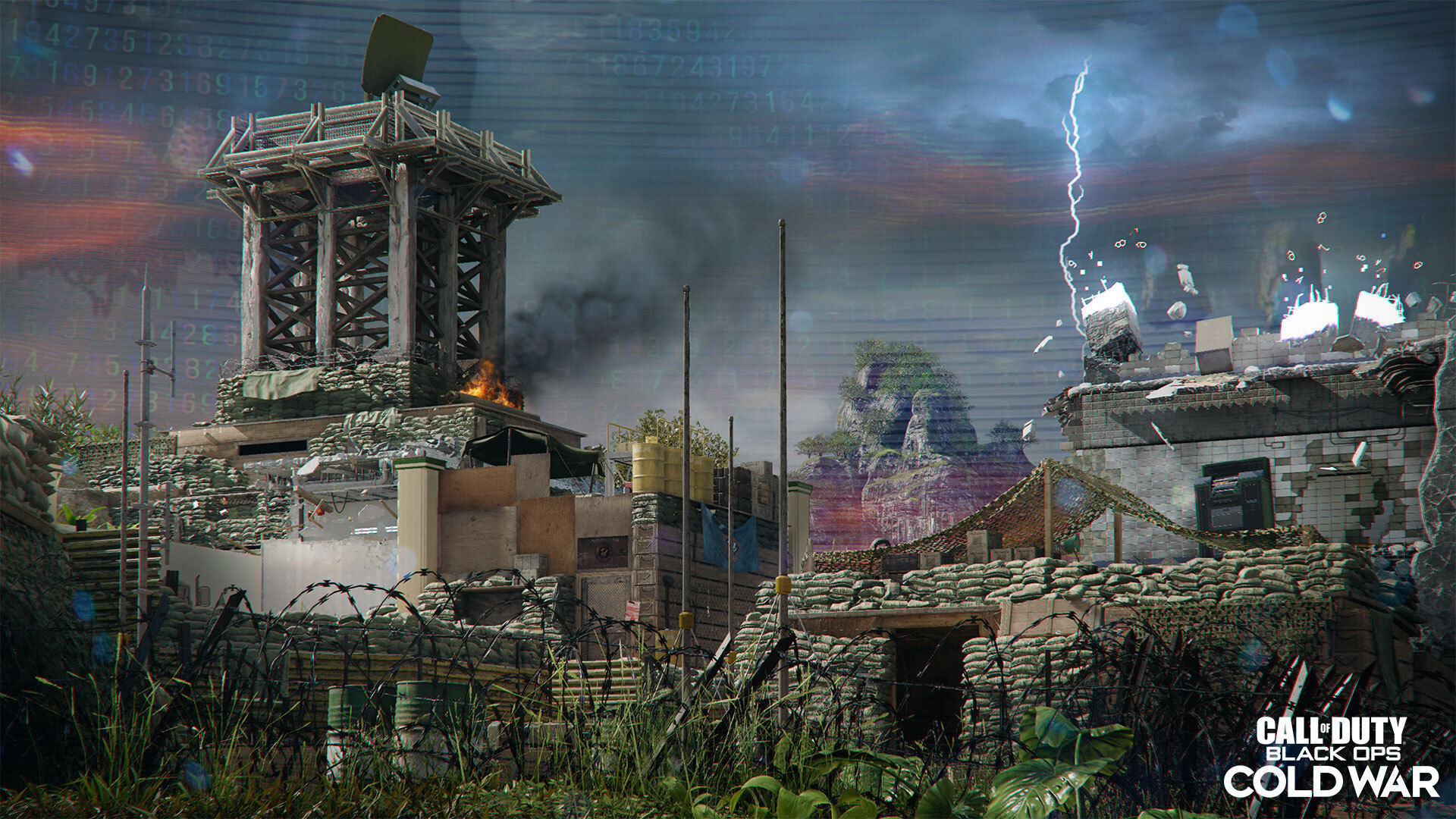 Deprogram represents a mash-up of Adler’s memories and combat experience, from his service in Vietnam to his fanatical hunt for Perseus. It’s a medium-sized map, and as you traverse its lanes, you’ll encounter sudden shifts in the environment as it moves from one memory to another.

The starting spawns to the east and west show his memories of Vietnam — an ammo depot in the west and barracks in the east. Both spawns include a cargo truck that you can climb on for a greater view of the area. Do this and you’ll immediately get a sense of the map’s stranger elements.

From the western spawn, there are three main routes. Go right along the south path through the artillery dump and into the communications room, where memories of Adler’s subjection to the Numbers Program bleed into the environment. This is most noticeable as you progress through the caves, littered with televisions displaying static screens and an operating table with floating restraints. The caves open up again by the helipad near the eastern spawn. Watch out for enemy Operators coming in through the middle paths.

Take the middle route to find a stone sculpture of Adler’s face, odd from the front and downright bizarre from the back. Past the statue, one path leads through an interrogation room to the northern road, another leads down into the caves, and the forward path heads right into one of two Red Doors.

Both doors are labeled on the map and teleport you to the same lab located in the topmost building. You cannot return through the door you entered from. The three short paths here converge on a single room and its outer ledges, providing powerful vantage points over the top half of the map.

The north road splits along the middle of the map and farther north into a lowered trench; this provides another means of moving out of sight, provided you check the openings in the lab overhead. Continue east until you reach Adler’s memories of the Mall at The Pines and the Galaxy Room arcade. 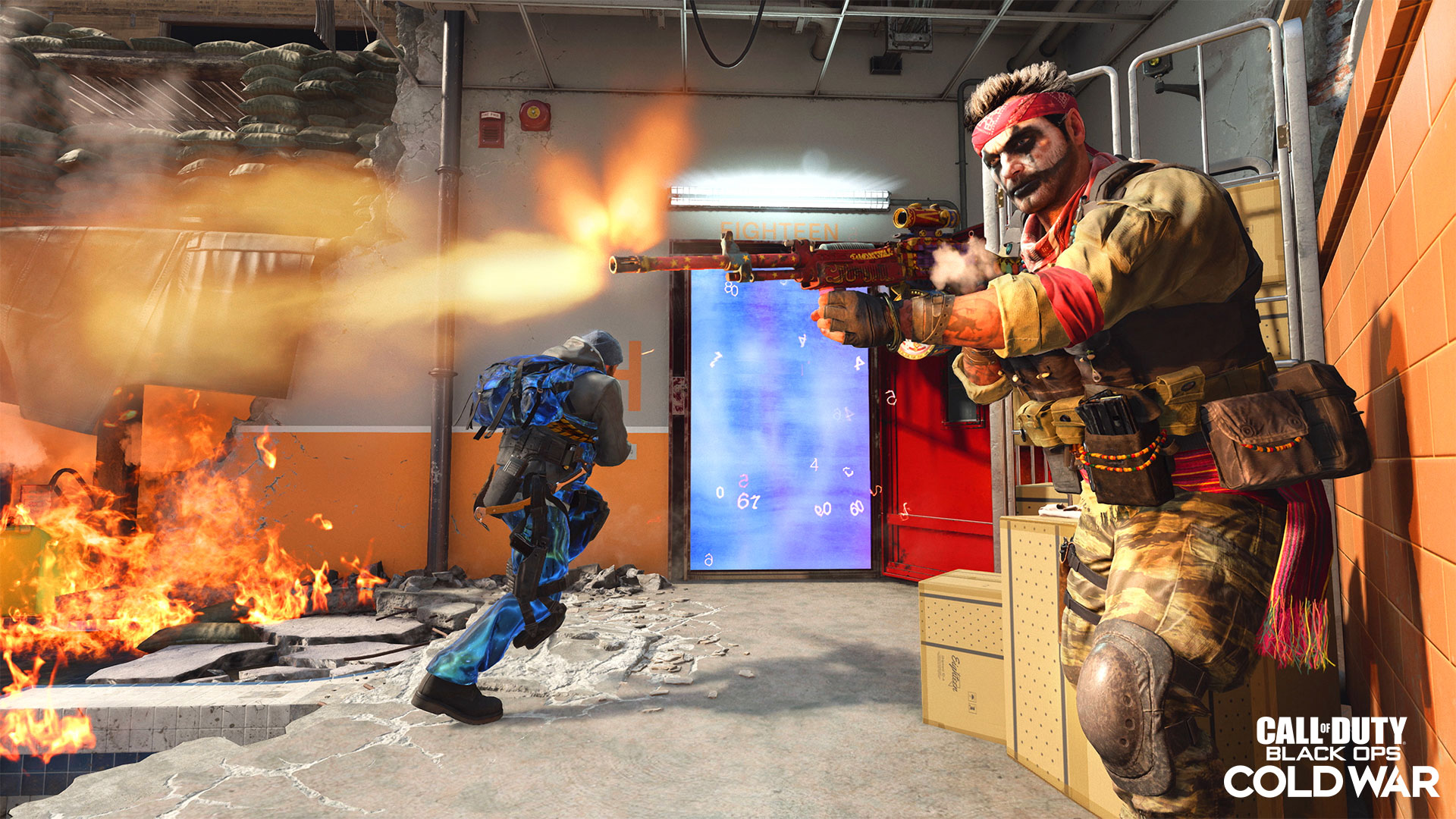 Its surreal elements aside, this map is tricky, so do yourself a favor and learn the lay of the land. The first thing to understand are the Red Doors. Remember that both lead to the same area, so while that area offers powerful lines of sight to mid- and long-range Operators, it won’t be long before enemies start pouring in after you.

Take advantage of the map’s loose three-lane structure. There are plenty of shortcuts leading down into the caves and between the northern road and trench. The environment’s high walls, stacked sandbags, and large vehicles often disrupt line of sight on the ground; use this accordingly to ambush enemies and melt out of view when under attack.

SMGs and Shotguns can work wonders in the middle as you loop around the center structure with the Red Doors and attack enemies in the caves and the top road. If enemy Operators occupy the top lab, teleport up and clear them out, then hop back down toward the middle. If you’re on the receiving end of this, take out an Assault Rifle and utilize the map’s many midrange sightlines to target your enemy from a distance. 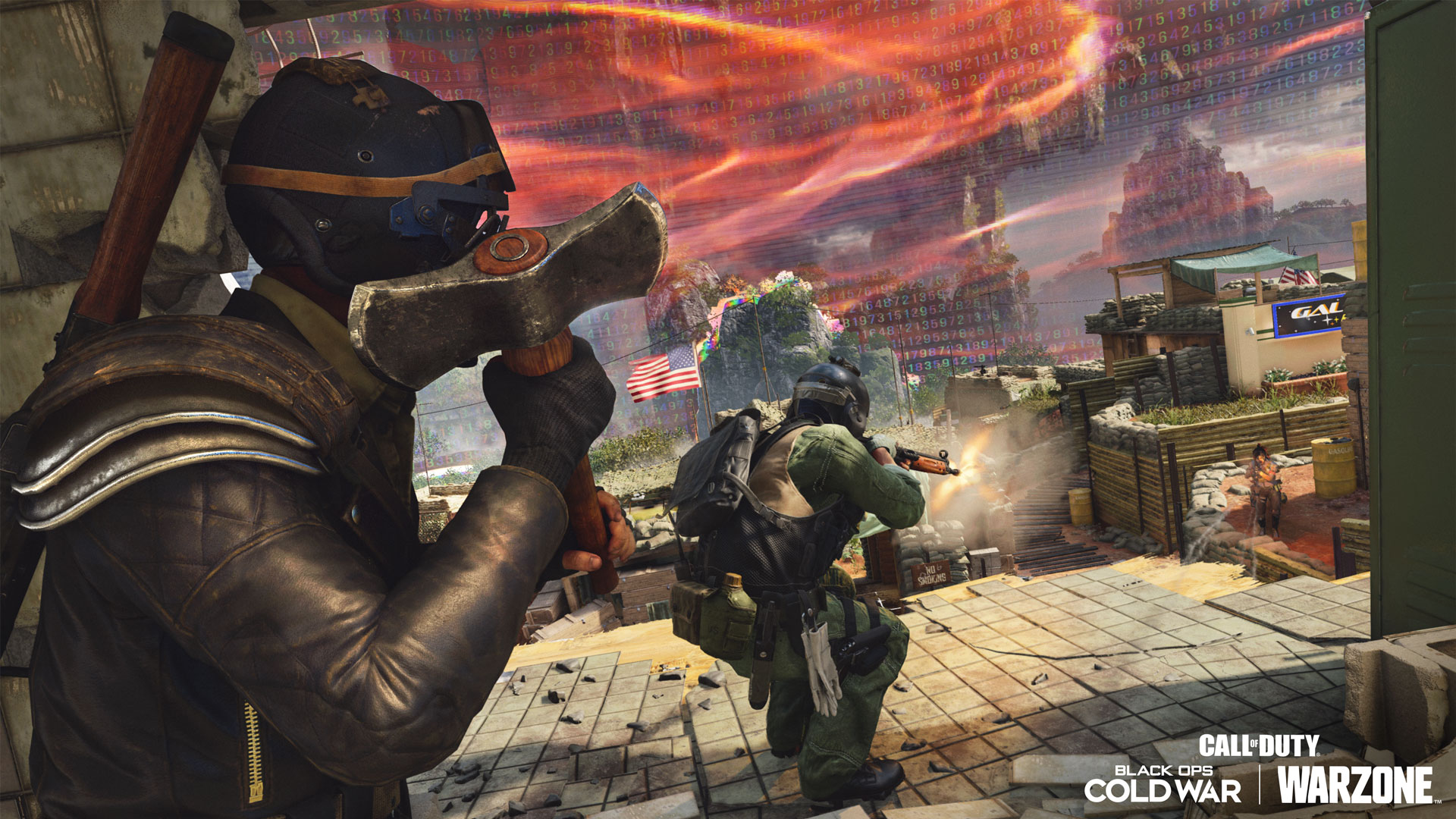 For a low-cost streak setup, consider the RC-XD, Counter Spy Plane, and Flamethrower. Detonate the RC-XD near unsuspecting enemies in the caves, or even blast Operators attempting to teleport through a Red Door. Disrupt their awareness via the Counter Spy Plane and use the Flamethrower when teleporting to the lab to flush out snipers.

Aerial Scorestreaks in the form of Attack Helicopters, Artillery, and Strafe Runs can be effective here, though timing and positioning are crucial. The caves to the south, scattered buildings in the north, and the topmost lab all offer overhead protection. Take note of where the fight is and deploy your aerial attacks when you know there are enemy Operators out in the open.

For higher-end Scorestreaks, start with Air Patrol for a big score boost against aerial operations, and move onto the War Machine and H.A.R.P to flush out the enemy team. The War Machine works wonders in the map’s confined areas, and H.A.R.P. gives you intel on who’s teleporting and who’s sticking to their path on the ground. 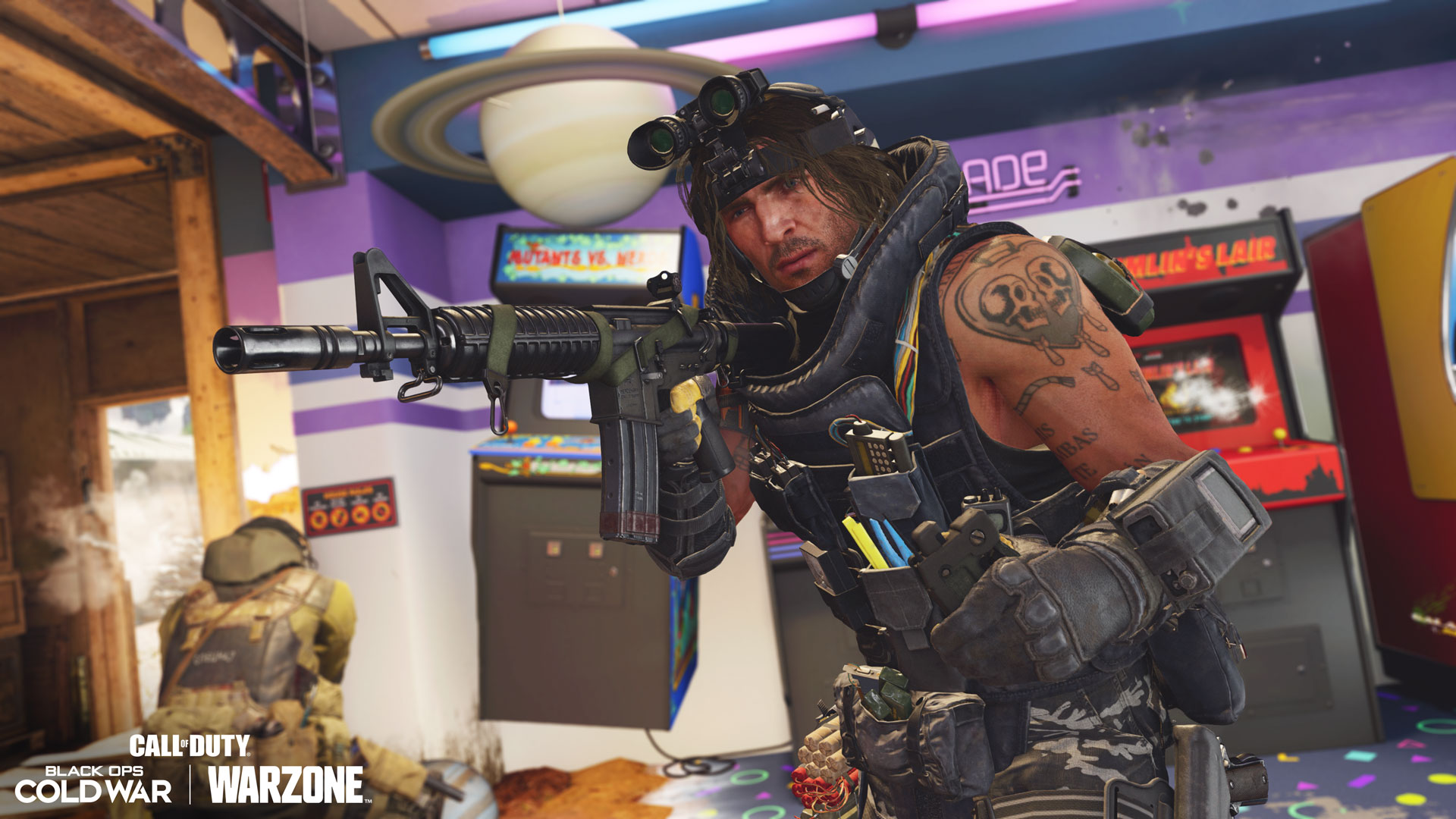 In Domination, capturing B requires heading into full view of the topmost lab, at least until you can get behind the broken wall for cover. A Smoke Grenade can be a real help here; better yet, work with your team to hold the lab in tandem as you take the site. A and C, while less chaotic, shouldn’t be taken for granted. Both are positioned on flat spaces with several entry points all around. Work together to capture points so you can cover as many angles as possible.

The focused combat in Hardpoint provides a great way to zero in on the map’s various environments. In linear order, the hill rotates from the center top road to the middle caves, up into the lab, and finally on the top road again toward the west spawn. That makes the lab vantage point crucial in three of the four hills. After some Hardpoint games, you’ll be an expert on the teleport system.

Search and Destroy transforms the environment from a chaotic arena into a highly tactical experience. With just one life on the line and a teleportation system that transports players from mid-map to the top in a flash, it’s vital that you keep tabs on your enemies’ whereabouts. Hit up the B site to avoid the lab altogether in the caves, or take the bomb to A in the trench near the Galaxy Room, watching that side lab window on approach. 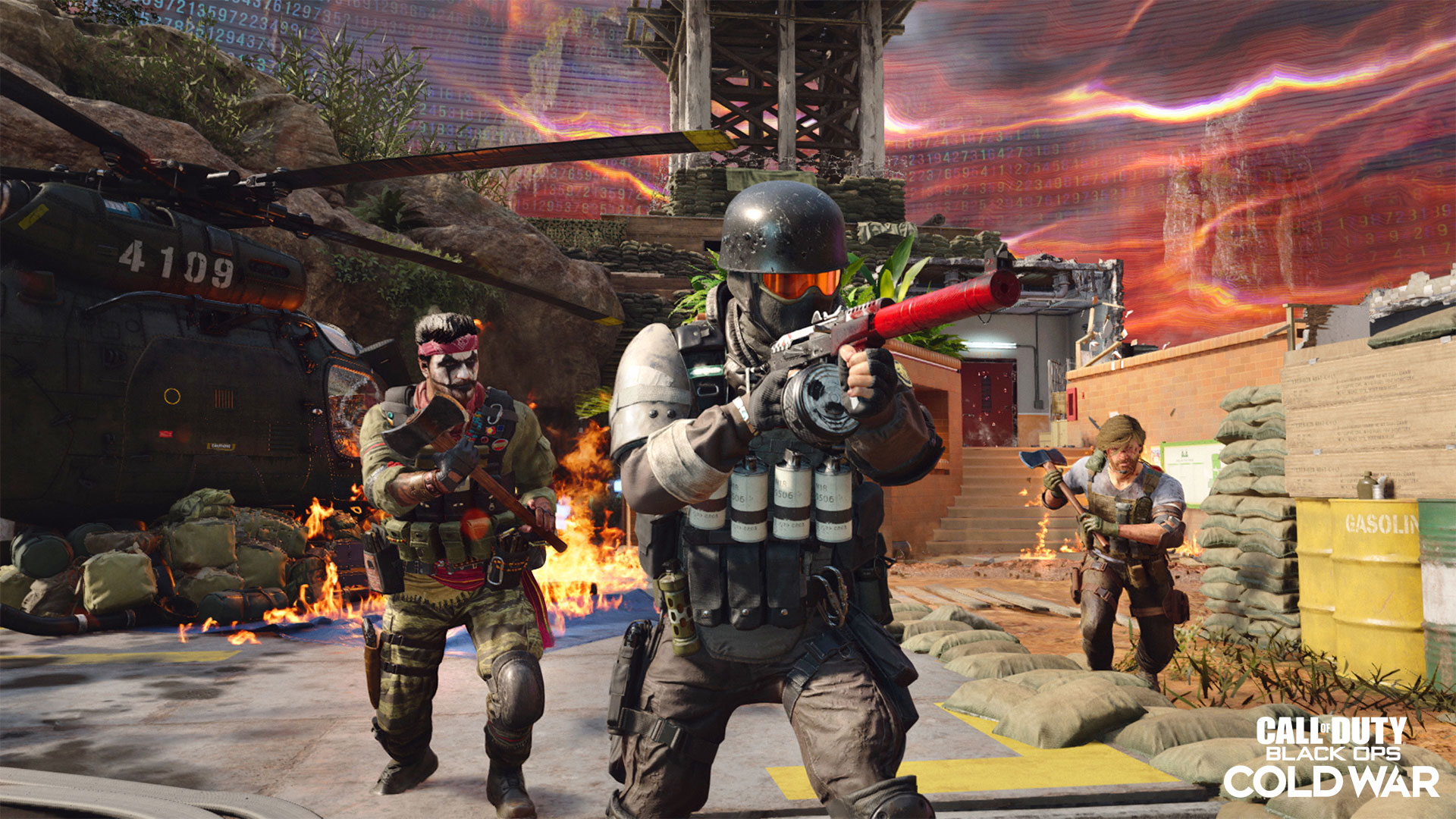 Using the Law Breaker Wildcard, we’re equipping both weapons from the bundle. Each comes preconfigured with five gold standard attachments used in competitive play. Use the “Shopping Cart” up in the lab and along the northern road and trench. Down in the caves and around the red door structure, “Management Material” reigns supreme.

We’re taking Flak Jacket and Forward Intel from Perk 1 via Law Breaker. Explosive resistance is always useful, and Forward Intel provides invaluable intel on your enemies. Take Ghost to keep a low profile while on the move. Plant your C4 in the upper lab, then hop back down to the ground floor and set it off the moment an enemy appears near its spot. Use the Smoke Grenade when you need to get past the lab without being seen.

Finally, the Field Mic provides further intel on enemy positions. This is especially useful in the confined caves and around the initial spawn points.

9. After You… Remember that both Red Doors lead to the upper lab. If you see or suspect an enemy teleporting in, wait a moment and then follow after them. Take them out from behind, get some eliminations from up high, then get out of there.

8. …Now Come On In. Instead of teleporting and running right up to the lab perch, consider facing back where you came so you can greet enemy intruders with a hail of bullets. Remember that they can appear from one of two doors, so be ready.

7. Or Avoid It Altogether. Just because you can teleport doesn’t mean you should. Don’t underestimate the usefulness of the caves when the other players are busy duking it out in and around the lab. It’s a great way to cross the map quickly, as long as you keep your weapon up and ready to fight.

6. Get Paranoid. In Adler’s subconscious, you have a right to be paranoid. Take the Paranoia Perk with you to dramatically up your awareness as you move through the map. With shifting positions and multiple entry points in every part of the map, you’ll be thankful for the heads-up to danger.

5. Death Machine Mayhem. For those times when your team’s got a lockdown on the Red Doors and lab, the Death Machine can do absolute wonders. Teleport to the lab, enjoy the wide-open view, and annihilate anyone who comes into sight.

4. A Little Backup. If you can’t resist the lab vantage point, consider taking a Proximity Mine or Gas Mine as your Field Upgrade. Plant it near the spawn points into the lab and you might catch an enemy off guard before they even get to your position. If the enemy has the same idea, equip Engineer and Spycraft to avoid getting caught in the same trap.

3. Footprints in the Lab. Use the Tracker Perk to see enemy footprints, particularly when teleporting to the lab. If Tracker activates, there’s a good chance there’s someone already there. Get after them.

2. Equip the .410 Ironhide. Available in the Season Six Battle Pass at Tier 15, the .410 Ironhide is one mean Shotgun that can do some real damage in the caves and around the center structure. It’s also great for clearing enemies out of the map’s smaller buildings, like the interrogation room, Galaxy Room, and of course the upper lab.

1. Deprogramming in Session. It’s no small order to untangle a man’s mind after brainwashing, especially one as tough as Adler. Take your time in Deprogram. Each match gets you a little closer to unraveling its surreal nature.