A new map, game mode, and enough green content to make a leprechaun jealous is now available in Call of Duty: WWII!

Call of Duty: WWII’s Operation: Shamrock & Awe community event has arrived! Wear your green and feast your eyes on what is heading your way from the team at Sledgehammer Games now through April 3. 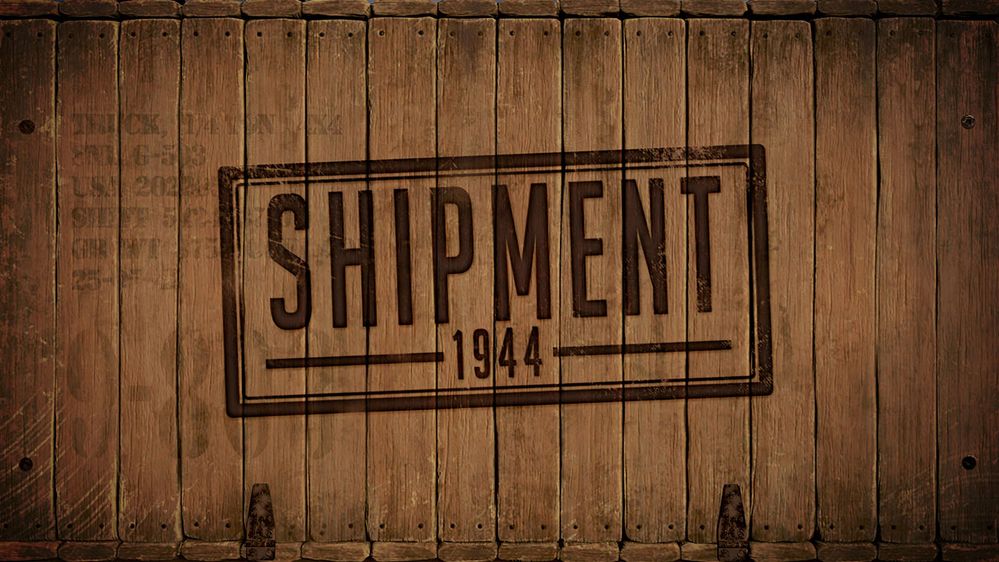 Leprechaun magic has produced a reimagined map – Shipment 1944. This is a fast-paced, explosive experience with nowhere to hide, and as a tip you might consider enlisting in the Armored Division or using the Hunker Basic Training before you drop into a match.

Shipment 1944 will debut for Season Pass owners, who will have early access first on March 13, and all players will be able to play the map for free starting on March 16. Plus, it will be still playable after the Shamrock & Awe festivities are over. 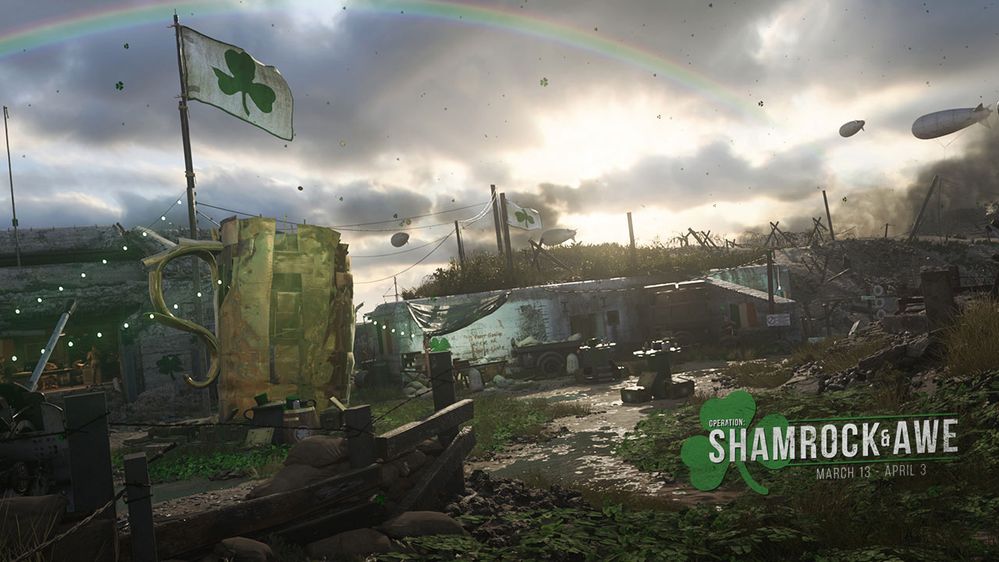 The Wearin’ o’ the Green

Headquarters will be sporting a St. Patrick’s Day makeover throughout Shamrock & Awe, and Captain Butcher himself will be partaking in the revelry as well. He’ll have two time-limited St. Patrick’s Day collections that will vanish at the end of the event, so be sure to visit him often and kit out your collections.

Additionally, you can find Orders and Contracts throughout Shamrock & Awe that will yield Supply Drops and even weapons. So, make sure you check back with both Captain Butcher and Major Howard often to see what’s on tap. 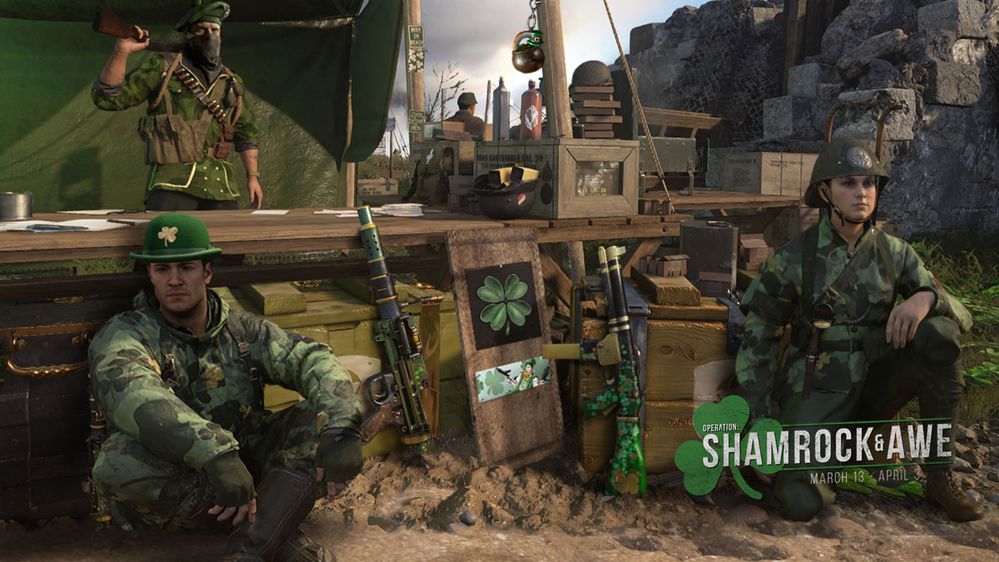 A Pot o’ Gold’s Worth of Gear

Everyone knows that leprechauns grant wishes, and in Shamrock & Awe someone has been wishing for gear, and lots of it. There’s a load of St. Patrick’s Day gear heading your way, with more than enough green to coat the Emerald Isle from top to bottom. You’ll find themed uniforms, helmets, weapon camos and more waiting for you.

And speaking of weapons… 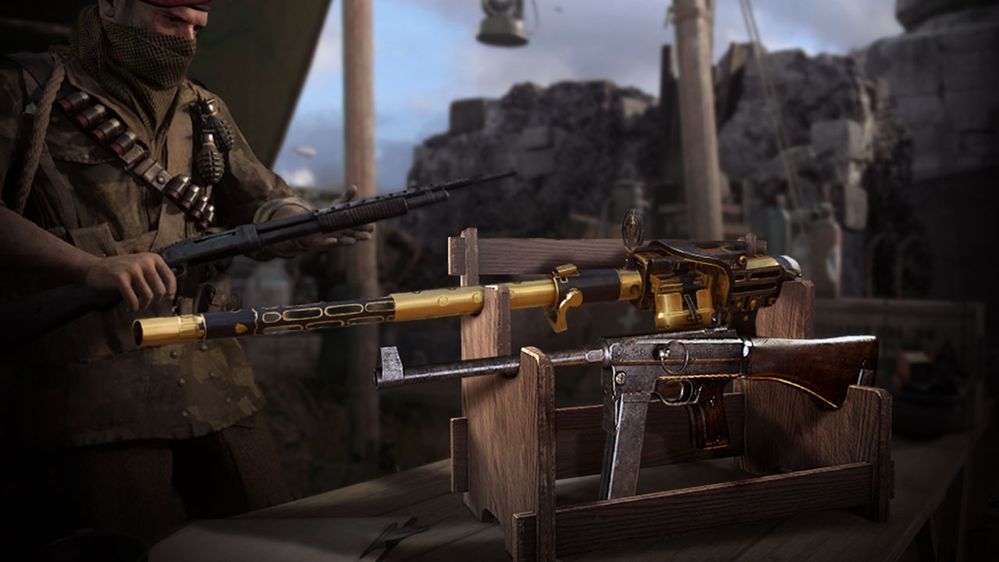 With so much new gear available during Operation: Shamrock & Awe, it might be easy to miss the two new weapons buried amidst the St. Patrick’s Day festivities. But give them a look, because either one could make a great addition to your loadout. 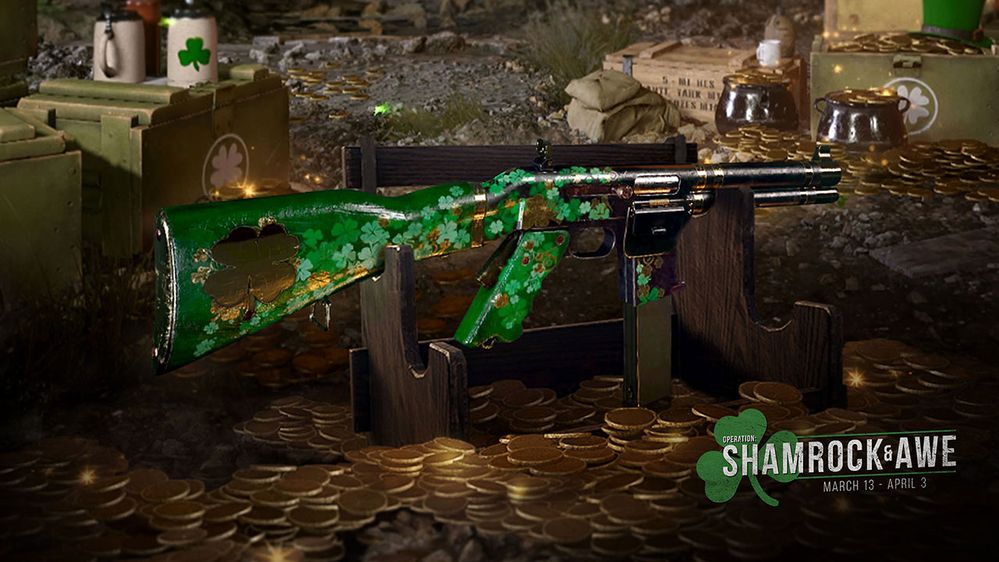 This French-made SMG is perfect for close encounters with a large magazine. It also has the fastest aim down sight in its class. 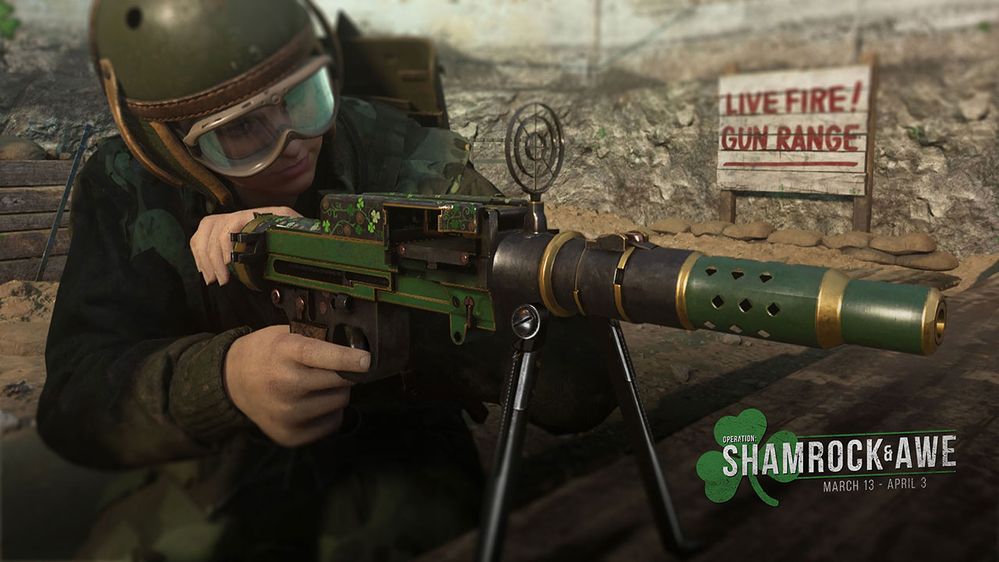 This belt-fed machine gun was originally designed to be used in Luftwaffe aircraft, but it’s just as dangerous on the ground. 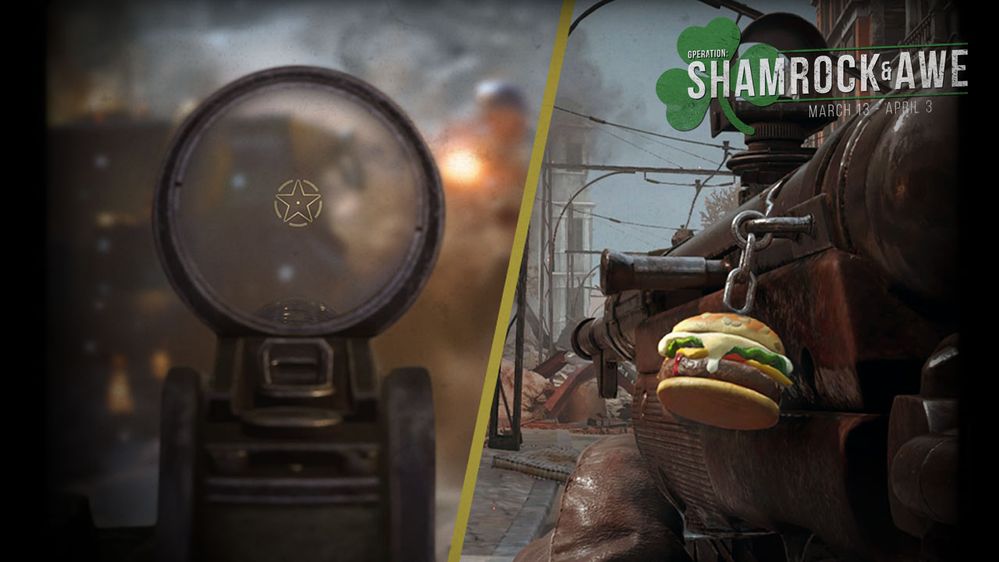 Call of Duty: WWII is now busting at the seams with gear, and Sledgehammer Games has packed a metric ton in here. In fact, you’ll find loads of gear beyond the St. Patrick’s Day greenery, including new items like weapon charms, along with a slew of new weapon variants, weapon camos, weapon reticles, uniforms, helmets, permanent collections, and more! 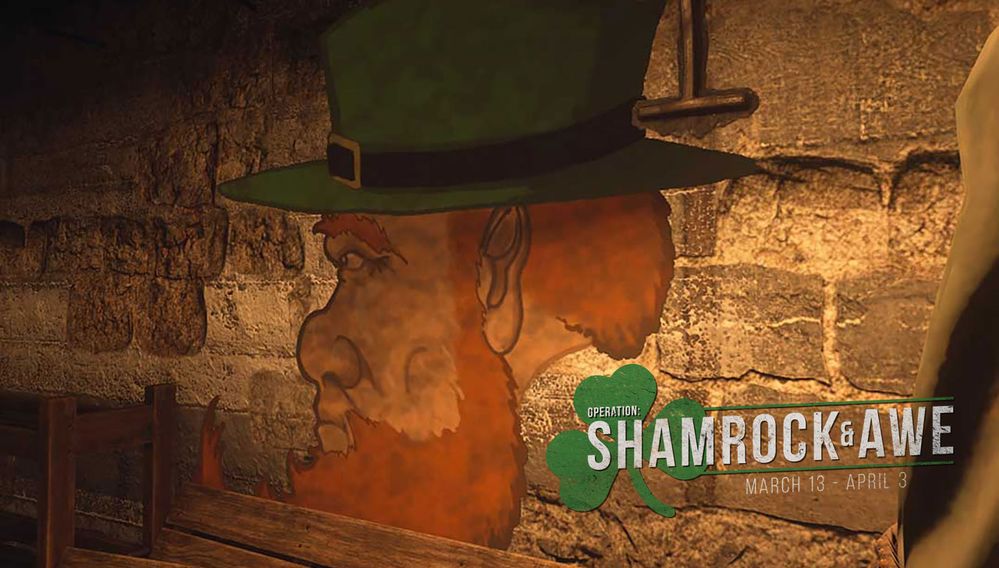 Multiplayer won’t be the only Call of Duty: WWII game mode to celebrate Shamrock & Awe, as Drostan and his Nazi Zombies crew are ready to drive the undead out of The Final Reich, Groestan House and The Darkest Shore.

The Nazi Zombies in-game lobby will be decorated for Shamrock & Awe, and there are some surprises for players who have keen eyes and know their way around each Nazi Zombies chapter. 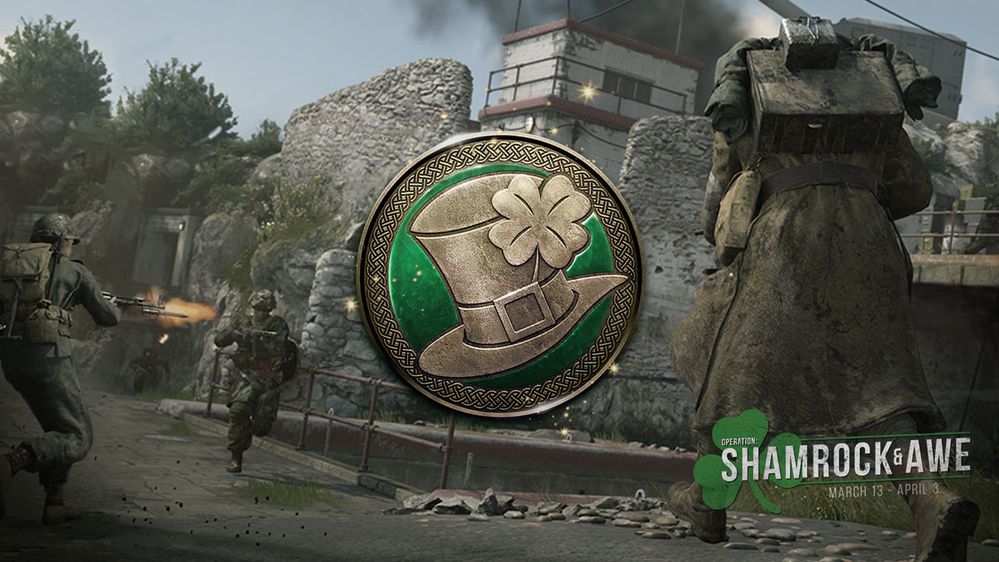 But that ain’t all! Are you feeling lucky enough to catch a leprechaun? Sledgehammer Games has added a brand-new mode into the game, and you’ll need the luck of the Irish to master it.

Leprechaun Hunt Moshpit takes traditional Team Deathmatch, Hardpoint, Kill Confirmed and Domination modes and adds a small twist - a scurrying leprechaun hiding around the map. Players who manage to eliminate this mischievous little sprite are rewarded with the Scorestreaks they have equipped, providing a quick way to change the game.

This mode will be available as a Featured Public Match playlist during the event, and it will sport 2XP from March 16 at 10am Pacific until March 19 at 10am Pacific to help you level up.

Log on to Call of Duty: WWII now to participate in the Operation: Shamrock & Awe community event before the shenanigans come to a close on April 3. Good luck and sláinte chugat!