Welcome back to the Quartermaster Comms, your home for hints, tricks and top picks for Collections and Contracts. A few things have changed at the Quartermaster: on top of earning Supply Drops through playing public matches and completing certain Contracts and Orders, you can now purchase them with Call of Duty Points (COD Points) directly from Corporal Green. With that in mind, here are this week’s top picks for you to set your sights on: 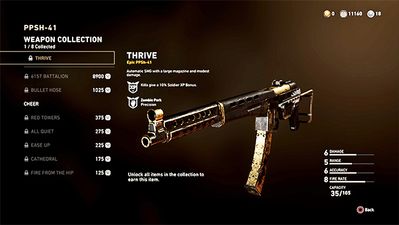 The PPSh has quickly emerged as a fan-favorite. With its high fire-rate, low recoil and solid damage, what’s not to like? Plus, with its rugged good looks and clean lines, it’s as handsome as it is deadly. But if you think the base model looks good, wait until you lay your eyes on Thrive. With golden accents and an eagle emblazoned across the back, it gives the term “Eagle-Eyed” a whole new meaning. Throw in a 10% XP boost while using it plus the Airborne’s silencer and you’ll be running and gunning your way to glory. 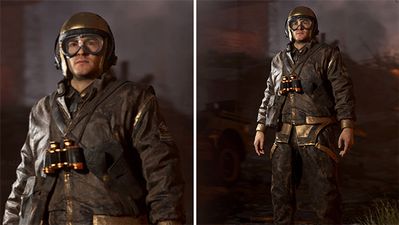 This has got to be one of the finest and most badass pieces of gear out there. What’s the point in winning if you don’t look good doing it? Named in honor of the US armored unit that fought from Sicily to Berlin which was the first unit to enter the German capital, you’ll be inhabiting both style and history when you don this great kit. Long and the short: you’ll be as good as gold and rolling over your foes in style.

This Contract may seem straightforward, but it’s a bit tougher than you’d think, especially if you tend to play the objective. In our experience, you pretty much have to give up on capturing the objectives to complete this Contract. But when a Rare Supply Drop is on the line, sometimes you have to let team play go by the wayside. That said, just because you’re not actively capturing the point doesn’t mean you can’t help your team to victory. Here’s one path you could take to Contract completion:

First, help your team capture B as quickly as possible, either by getting in the mix at the point or by providing overwatch while the rest of your squad takes it. Once you hold two objectives, you know the other team will be spawning at the third point and, thusly, can predict their movements. From there, it’s up to you on how you take them out, whether you want to get your Mountain on or run and gun for fun with Airborne or Expeditionary. A solid base of fire from a bipod-equipped Armored LMG isn’t a bad choice, either. Whichever you choose, be aggressive because 35 kills in a 10-minute, score-limited match is a tall order.

To make that order a bit shorter, don’t forget your Scorestreaks and Basic Training. Consider rolling in with Ordinance for cheaper Scorestreaks and definitely don’t leave home without an Artillery Barrage. Setting your cannon’s sites on a point under siege is a surefire way to rack up 3-5 kills quickly.

That concludes this week’s Quartermaster Comms. Keep an eye on your email inbox for future editions, which will be included in the weekly Call of Duty Newsletter. Want more? Check out last week’s issue by clicking the button below.