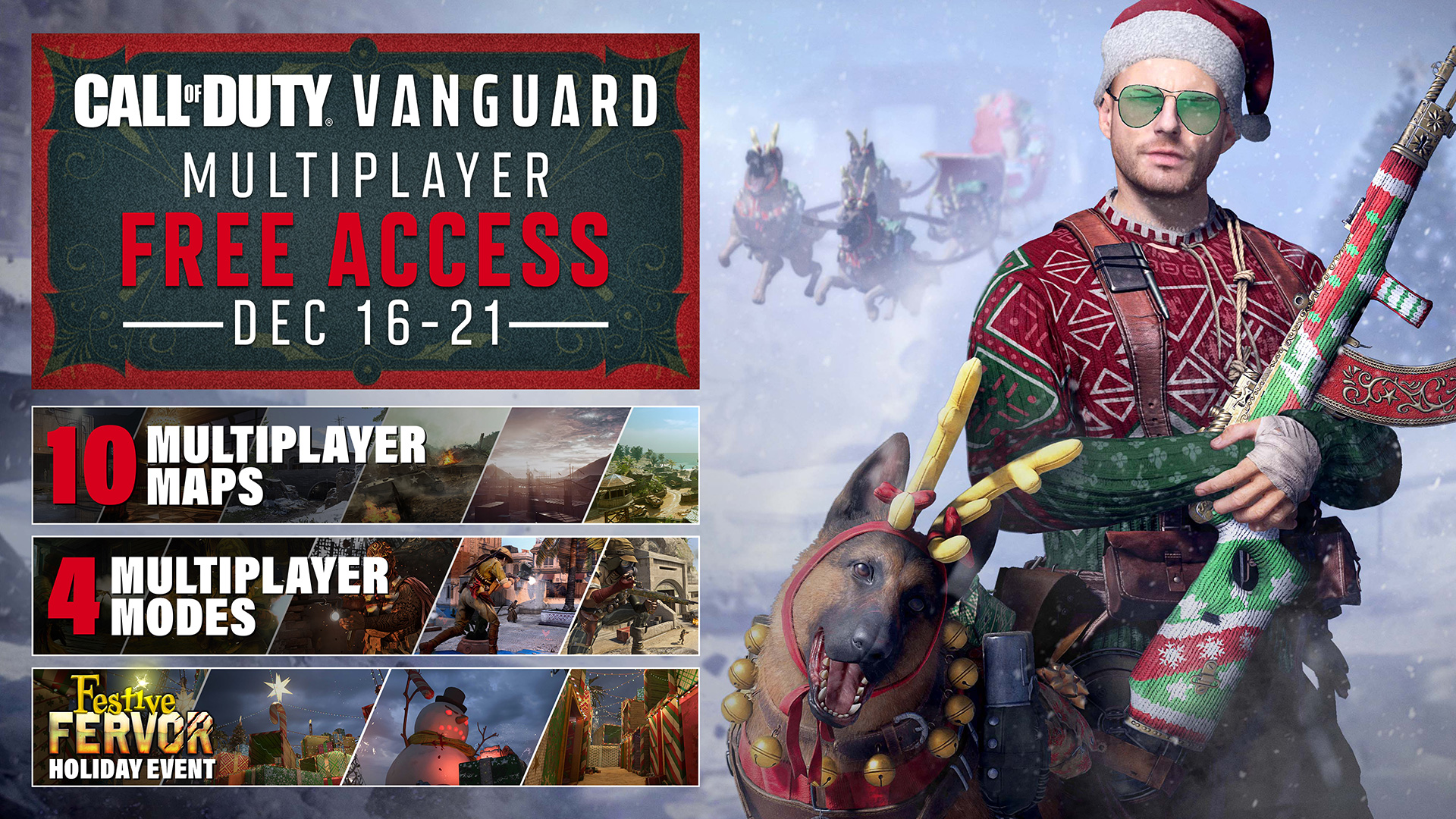 From December 16 to December 21, try out Vanguard with Maximum Double XP enabled and get rewarded with Tier Skips, an XP Boost and WarzoneTM-ready weapons when you upgrade to the full game.

From December 16 to December 21, try out Vanguard with Maximum Double XP enabled and get rewarded with Tier Skips, an XP Boost and WarzoneTM-ready weapons when you upgrade to the full game.

The most wonderful time of the year is here: a free access weekend for Call of Duty: Vanguard Multiplayer, complete with Max XP bonuses, during Festive Fervor. 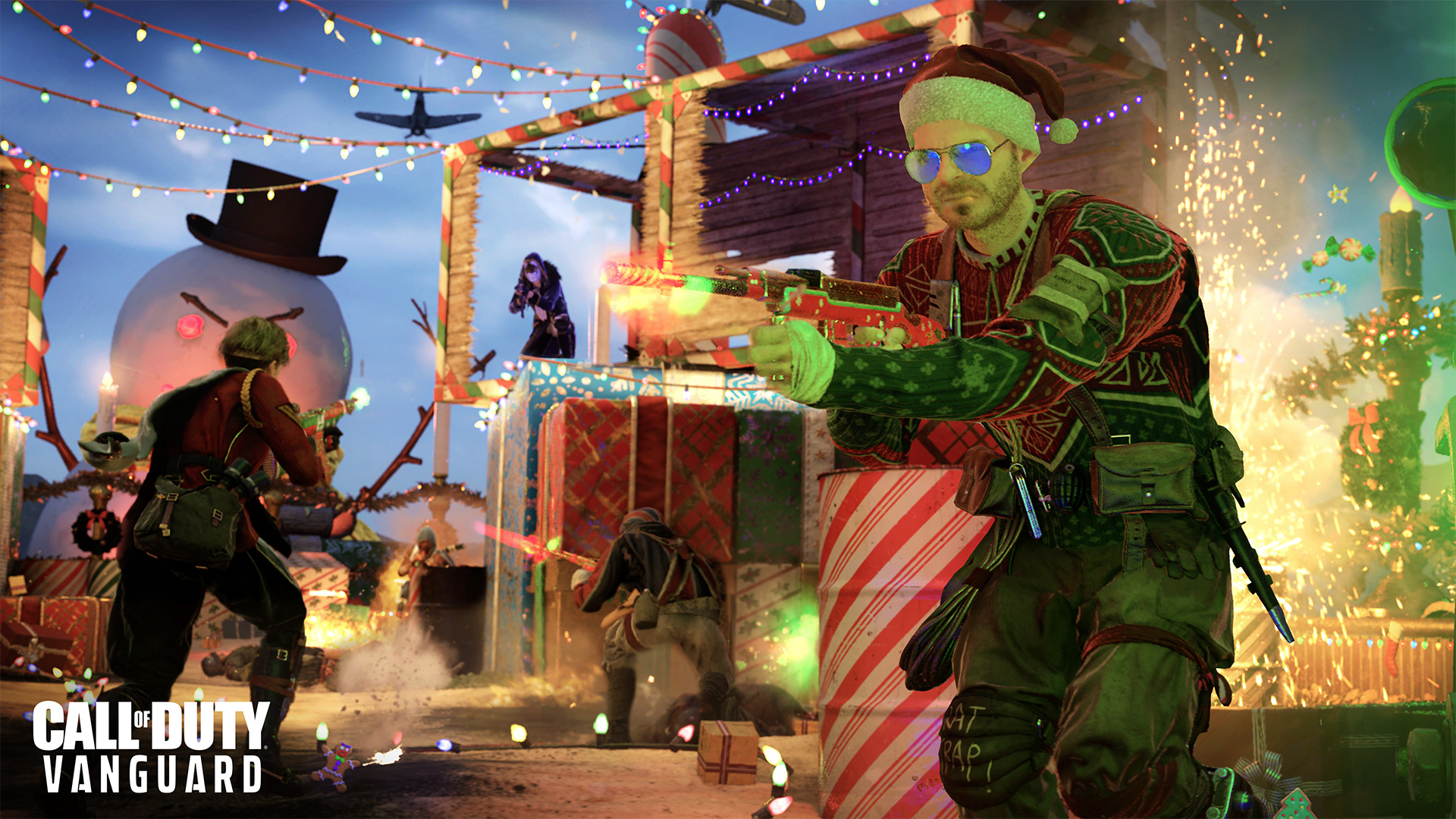 This limited-time Free Access weekend features three playlists, two of which should get you into the Festive Fervor spirit.

One is the Free Kills Playlist, a mix of Team Deathmatch, Domination, and Hardpoint at all Combat Paces on the new map Radar as well as Das Haus, Hotel Royal, Eagle’s Nest, Numa Numa, and Shipment. This playlist will also include Armageddon and Shipmas following the Festive Fervor Update at 9 p.m. on December 16.

Following that update, another playlist will go live: Shipmas 24/7, featuring the exact same modes and all combat pacings, but with – as the name suggest – Shipmas all day, all the time (or at least, for 24 hours across five days).

Both of those playlists are set to feature Festive Fervor festivities as part of the update during the Free Access Period, so be on the lookout for Elf Team Six and avoid Krampus’s naughty list by playing the objective! 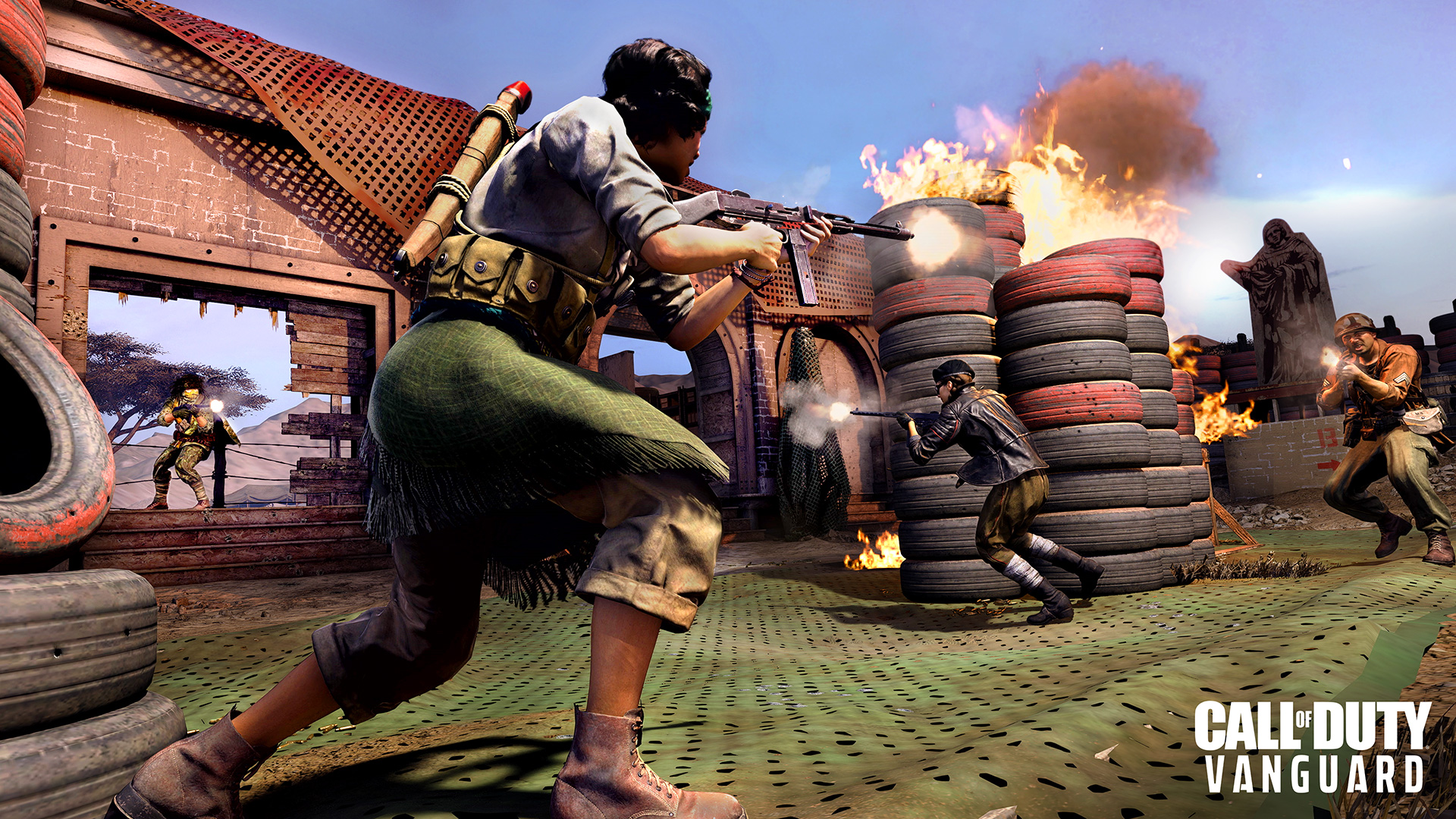 The Free Access weekend will also feature Champion Hill, the new survival tournament mode where building an effective loadout is just as important as having fast reflexes and quick thinking in tense small-team battles. This Champion Hill playlist will be a Trios tournament, so grab two squadmates and prepare for this challenging ascent towards victory!

Across these three playlists, you can level up all Vanguard weapons at double pace thanks to Max 2XP, including the four new weapons introduced at the start of the season. This is perfect for those looking to experiment with new armaments or build their meta loadouts for WarzoneTM Pacific, and all that weapon experience – in addition to Player XP, Operator XP, Clan XP, and Battle Pass XP, all of which doubled during the weekend – will carry over to Multiplayer and Zombies when you upgrade to the full game.

Should you enjoy this Multiplayer free access event, there is no better time to get the full Call of Duty: Vanguard experience, as anyone who owns or purchases the game before December 31 – including those who upgrade during this Free Access weekend – will get a sleigh full gifts for slaying use in Vanguard and Warzone Pacific:

- 10 Battle Pass Tier Skips for Season One – Enough automatically unlock a free Calling Card and 100 COD Points, or even more rewards if the Season One Battle Pass is purchased.

- A 10% Global Player, Weapon, and Battle Pass XP Boost During Season One – Earn that next Prestige Icon, weapon attachment, or Battle Pass Tier just a bit quicker with this XP Boost.

- The 24 Vanguard Tiers of the Season Six Battle Pass. If you have not already earned them last season, anyone who purchases Vanguard will receive these for free.

Note: these awards will be available after December 16 at 9 p.m.

Don’t know if you want all these free rewards on top of Vanguard’s gripping Campaign and its Multiplayer and Zombies experiences, which are set for even more free content in 2022? Then give Vanguard Multiplayer a try during the Free Access period, get a taste of World War II like you have never seen before, then grab all these additional rewards for the game and Warzone Pacific when you upgrade.

Vanguard Multiplayer Free Access begins on December 16 at 10 a.m. PST and ends on December 21 at 10 a.m. PST. An additional download is required to play. See your platform for details on file size. Check your squadmates’ objective-playing capabilities before they get hunted down by Krampus.

Call of Duty® Celebrates Festive Fervor with Limited-Time Event, Deals, and Holiday Gifts for All