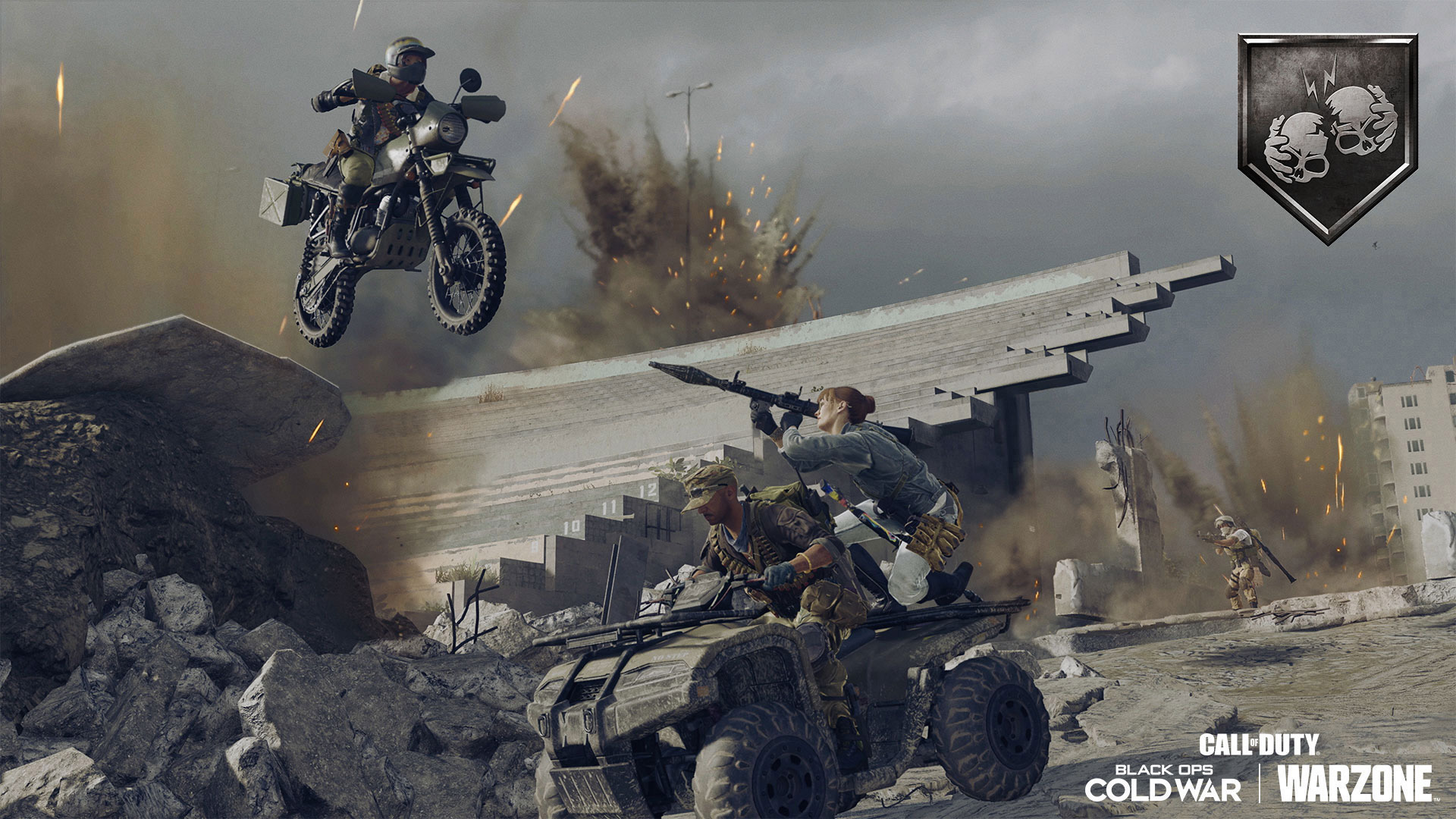 Do you consider yourself a Tier One Operator of the highest caliber in WarzoneTM? Prove it through Iron Trials ’84 — get the full intel on this intense new mode, including strategies and tips for winning a match and earning an exclusive Calling Card.

Do you consider yourself a Tier One Operator of the highest caliber in WarzoneTM? Prove it through Iron Trials ’84 — get the full intel on this intense new mode, including strategies and tips for winning a match and earning an exclusive Calling Card.

Within its first year, Warzone had over 100 million players drop into over 28 billion matches. Most of those matches were in a traditional Battle Royale mode, where claiming victory — even just once in a player’s career — is a badge of honor.

Of course, the most elite Warzone players may no longer see a standard victory as an achievement, as they become part of their daily routine. Some have even challenged themselves to get a three-digit single-game elimination count, or enter Trios and Quads lobbies as a true one-person army, going against the odds to still beat up to 149 other Operators.

For those players who consider themselves a true Tier One Operator, Raven Software presents your next challenge: Iron Trials ’84.

This variation on a traditional Warzone Battle Royale is custom-made for highly competitive players. If you envision yourself and your squad playing in the World Series of Warzone one day — or maybe you’re already a competitor looking to silence some doubters in public — then Iron Trials ’84 can be your proving ground.

From its rules to our strategies for earning an exclusive Calling Card through victory, this is Iron Trials ’84. 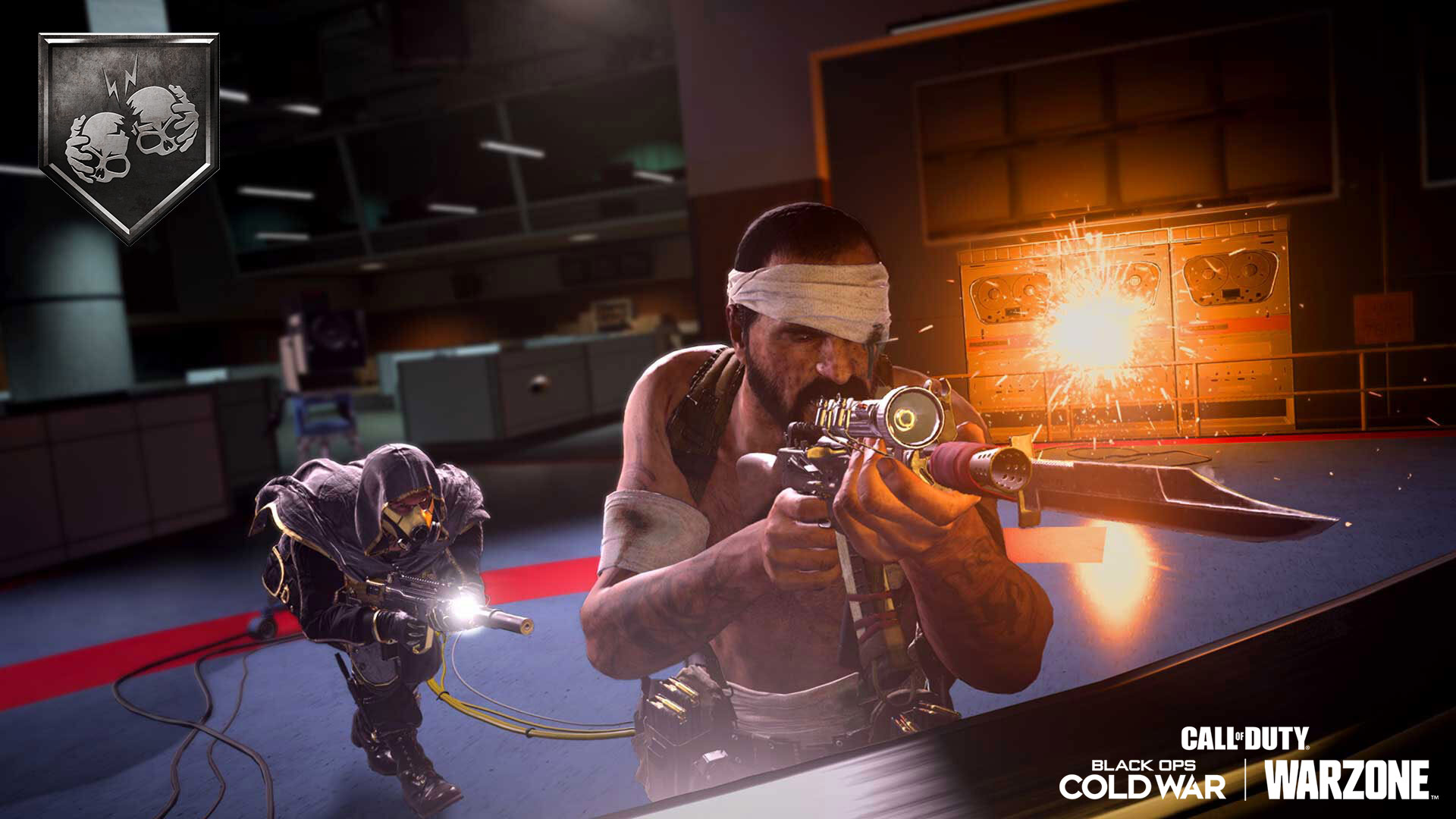 At its core, Iron Trials ’84 is a Battle Royale game mode — the last team standing wins, the Circle Collapse shrinks the playable area to promote engagements, and those who die earlier in the game have a chance to respawn if they win a duel in the Gulag.

However, there are numerous fundamental changes to this traditional formula within this game mode. All of them are meant to give players the chance to prove themselves as truly elite Operators — here’s what they are specifically:

Loadouts: No free Loadout Drops — those who want to use their custom-built weaponry and gain access to Perks will need to purchase one at a premium.

Vehicles: Only ATVs and Dirt Bikes are available.

Melee: Melee Finisher Damage has been removed. Settle the score with lead.

Base Health: Compared to a normal match, all players’ base health is increased from 100 to 250.

Heallh Regeneration: The regen delay timer has been increased from 5 to 7 seconds and regen per second has been decreased from 120 per second to 40. It may be wise for players to reconsider preferred Perks and Equipment.

Starting Equipment: Players drop in with a .44 Magnum and a Sledgehammer.

Loot: The item pool for Supply Boxes and items found on the ground have been significantly altered from that seen in standard play. This mode also emphasizes the importance of scavenging to survive - having a knowledge of where to find boxes and being able to complete multiple Contracts are two general Warzone skills that become even more useful in Iron Trials ‘84.

Basic Attachments: Common weapons will start with an attachment - most to provide their max magazine size.

Rarity Spawn Rates: Epic and Legendary weapons are now harder to find. Players will have to open a few more boxes than usual to find what they’re looking for.

New Rarity - Classified: These Black Ops Cold War weapons will spawn with a few more attachments than usual - more than the standard five. That said, good luck finding one.

Killstreaks: Drop rates have been reduced. Time to stop spamming UAVs and to start putting those senses to the test.

Cash Spawns: Larger piles of cash are rarer. Players will have to stay on top of scavenging for cash if they plan to afford a Loadout.

Sniper Rifles: A single headshot from a Sniper Rifle will only down an enemy if they are within 30 meters. This gives time for those on the receiving end of a longshot to react - the most elite snipers will be able to adjust their strategies accordingly and still dish out lethal damage at long range with precise follow-up shots.

Medical Syringes: Decreased the regeneration rate by 50%. Players will find that this piece of tactical equipment is still quite effective despite this change, especially given altered health regeneration rules.

Loadouts: No akimbo. No semi-auto or fully auto Shotguns. Limited selection of Tactical Equipment. It’s down to the bare essentials and the will to survive.

Redeployment: If players happen to survive their Gulag match, they’ll redeploy with whatever equipment is leftover from that fight. Be mindful of those resources.

Duos: We’re limiting the squad size in order for players to really feel the impact of the increased Time-to-Kill. You only get to pick one squadmate… so choose wisely and watch each other's backs. 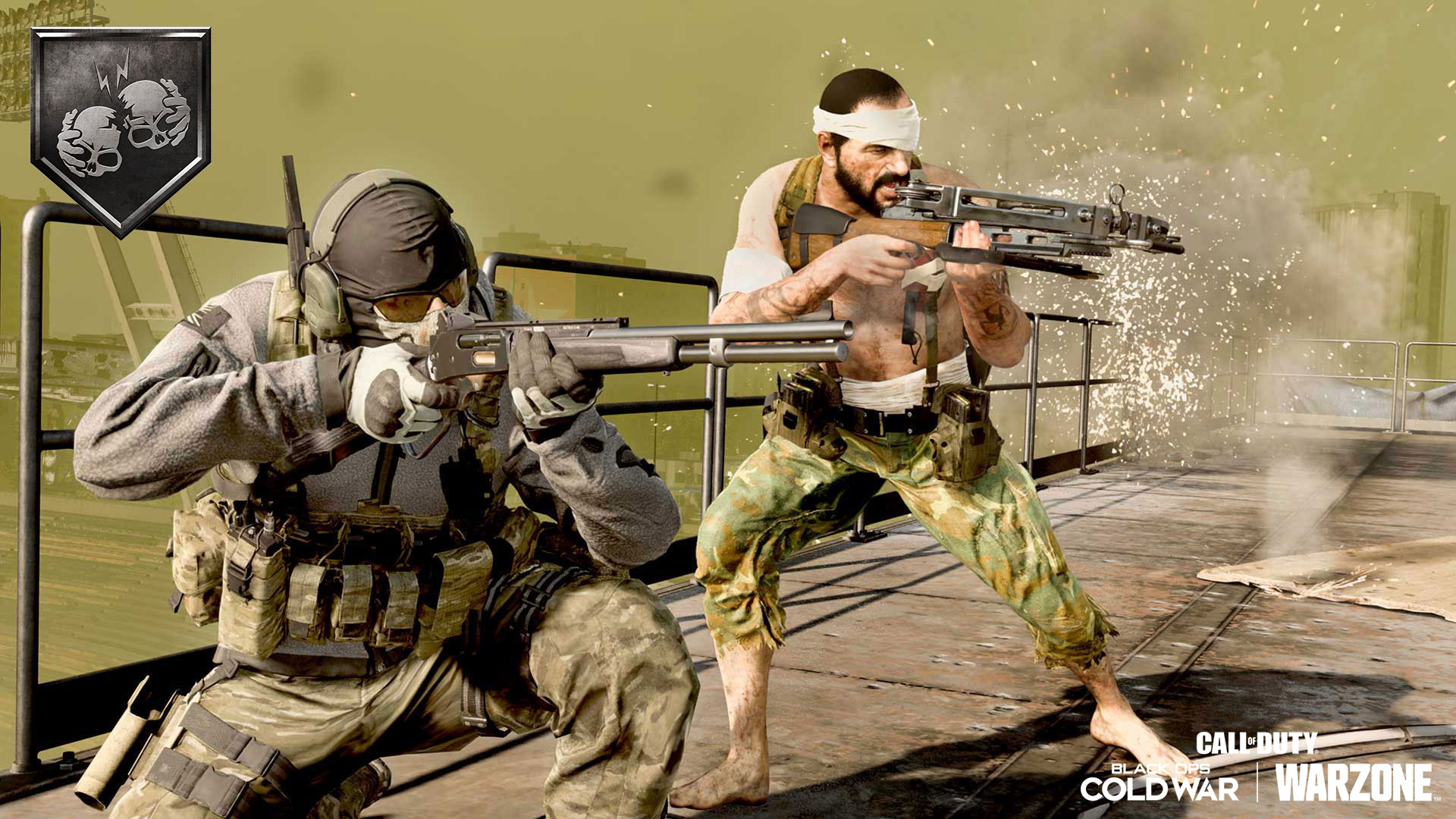 The Iron Trials ’84 meta may be far different than that of a regular Battle Royale, as a longer time-to-kill (TTK) due to increased player health is a game-changer when choosing a Loadout.

Before you can even pick up a Loadout, finding Supply Boxes and scavenging better tools for engagements is beyond crucial in the game’s opening moments. Knowing how to use most of Warzone’s weaponry can be a game-changer, as the increased cost of Loadout Drops — and the lack of the two free ones dropped during the match — may force you to use armaments found in Verdansk for the entire match.

Like a traditional Battle Royale, getting that Loadout Drop is a catalyst for coming out on top. However, given the health increase and direct nerfs to specific items, such as the Sniper Rifle, you may have to change those Custom Loadouts.

What to alter in those Loadouts is entirely up to you — and of course, the community that will try and crack the Iron Trials ’84 meta code. On one hand, weapons with a high fire rate, such as the MAC-10, could be great for consistently pumping in damage against higher-health opponents. However, this does not leave the high-damage, yet slower-firing weapons like the EM2 in the dust; those who can effectively score headshots could find them even more effective than the fast-firing “bullet hoses,” especially when trying to fill the massive Sniper Rifle–sized gap in long-range combat.

Speaking of Sniper Rifles, that specific headshot nerf for Iron Trials ’84 may throw the traditional bolt-action meta into a tailspin. At longer ranges, a sharpshooter must be able to hit several shots in succession to take down a target, which may increase the use of semi-auto Sniper Rifles — yes, even the Soviet workhorse from Call of Duty®: Modern Warfare® that many overlook.

No matter the weapon, communication within a squad and quick play are ultimately what separates the Iron Trials ’84 victors from the pack. Remember that the Circle Collapse will roll in quicker than usual, and always keep “the numbers” game in mind — and, no, we don’t mean the event that’s taking place next week — a full squad is better than a solo player, so work together to defeat the opposition.

If you’re struggling to win Iron Trials ’84, head back into traditional Battle Royale to get some practice, especially in the Gulag. While all the rules won’t be active in a normal game, learning where Supply Boxes are, knowing what Gulag strategies may work best, and spending more time using those Custom Loadouts you built for the trials can provide some worthwhile training for the whole squad.

And remember: just one win in Iron Trials ’84 awards you with a badass Calling Card. Remember to put it on your profile with pride, as not many players will be able to boast about conquering one of the toughest experiences in Warzone to date. 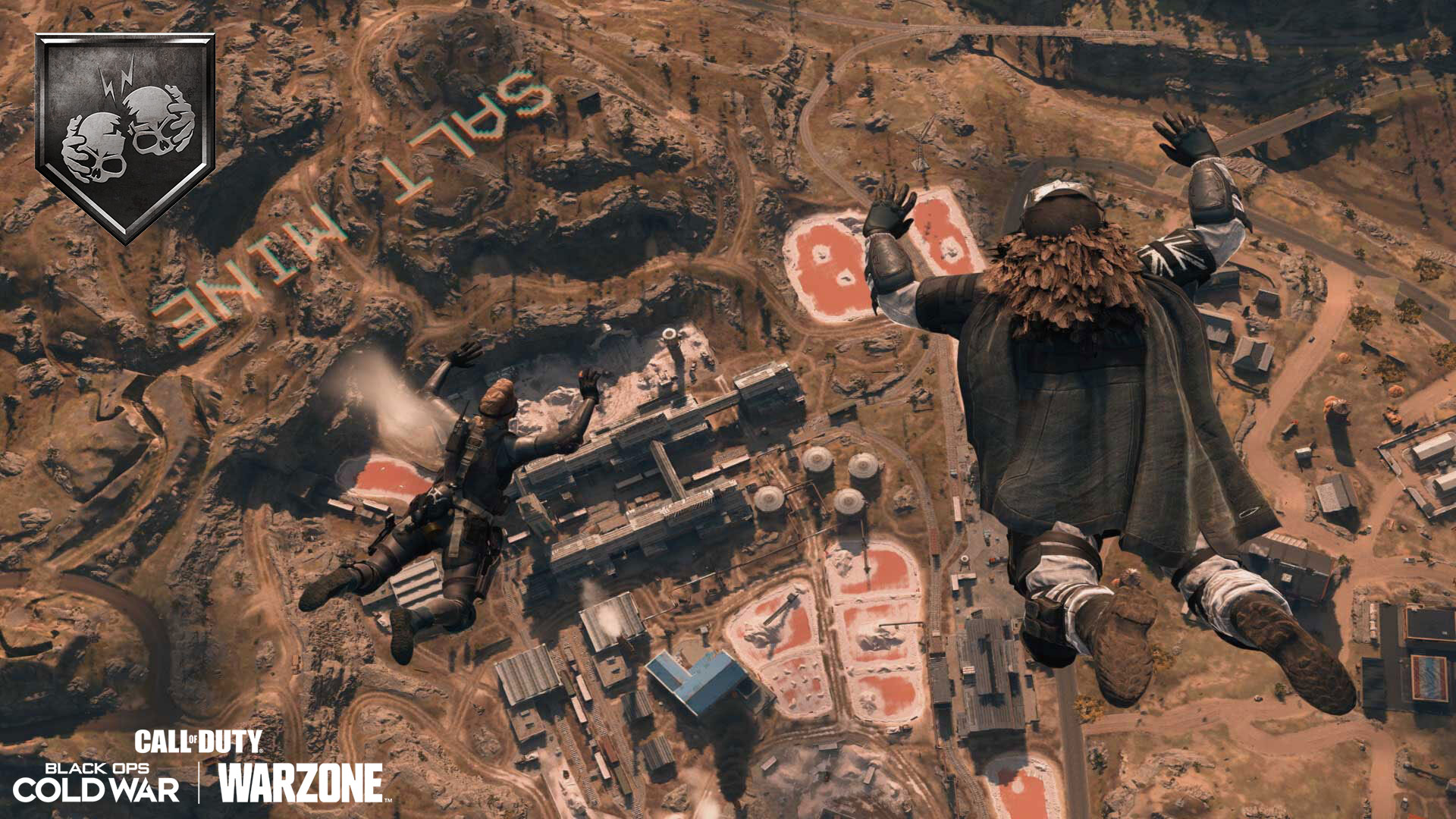 Top Five Tips for the Trials

1. Think Before You Leap. Before even getting a single boot on the ground during an Iron Trials ’84 match, knowing where to drop is a vital first step of a winning strategy. Consider the lack of vehicles and increased circle speeds, as well as the scarcity and increased cost of Gas Masks, when trying to determine where you and your duo should land – it may be wiser to drop towards the center of the first circle, but know that plenty of other duos may have the same idea.

2. Harder to Hit a Moving Target. Increased health results in a longer time of engagement. Try using micro-movements, such as going prone, sliding, and strafing, to throw off an opponent’s aim, but remember to keep yours steady enough to win the fight!

3. Search, then Destroy. In the beginning of an Iron Trials ’84 match, make it a point to scavenge as many Supply Boxes and Contracts as possible. The Cash drops and rewards are crucial for eventually getting that more-expensive Loadout Drop, and the weaponry found in those boxes and after completing Contracts is even more important to survival — it may be all you have for the match if the squad cannot round up enough cash for a drop.

4. Reconsider Those Loadouts. From increased health to direct and indirect changes to several Loadout items, consider changing a few Custom Loadouts for Iron Trials ’84. Try a variety of weaponry and see what the community is using to model your Loadouts accordingly, but above all else, do not be afraid to use armaments that feel most comfortable to your personal playstyle, even if they are not part of the current meta.

5. Communicate. Communicate. Communicate. Iron Trials ’84 is all about a squad’s ability to combine their strengths to overcome a more challenging version of a typical Battle Royale. Use your microphone or text chat, and utilize the Ping System to mark targets, objects, and drop-in locations for your squad. Everyone on the squad is in this together: leave no Operator behind, and you’ll be on your way to earning that exclusive Calling Card.

Intel Drop for Pacific Map in Call of Duty®: Warzone™

A new map is coming to Warzone later this year. Here’s the latest intel drop.