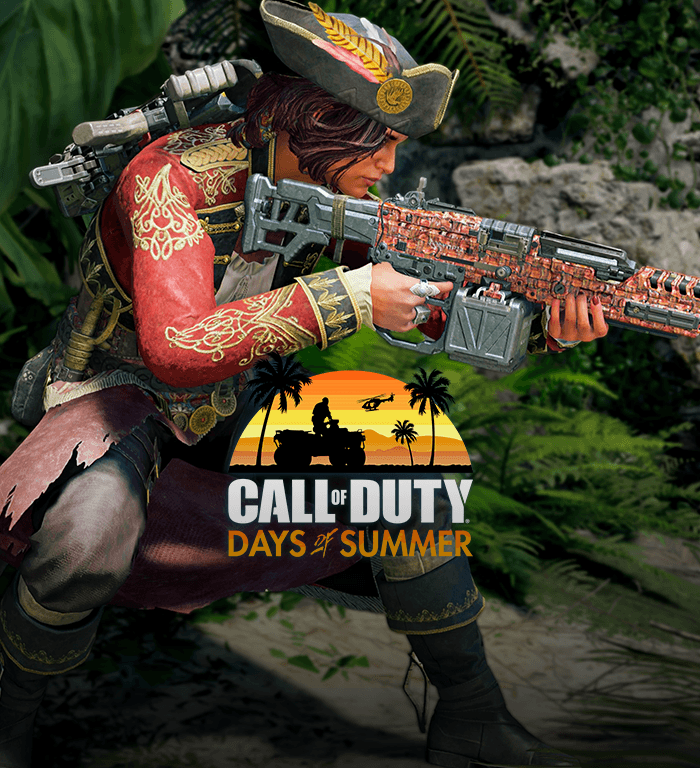 All the Intel on the Days of Summer Black Market Updates

Blackjack's been busy. Take a look at what he's got for you.

All the Intel on the Days of Summer Black Market Updates

Blackjack's been busy. Take a look at what he's got for you.

When warmer temperatures, sandy beaches and the savory smells of an open grill become more common, it all means one thing: it’s time for Days of Summer.

Operation Spectre Rising’s Days of Summer event introduces a host of updates, new gear, new modes and all sorts of Black Ops 4 summer fun. We’ll be taking you through some of the highlights of those updates and gear, because Blackjack has been hard at work tweaking the Black Market.

Vendetta Sniper
If you’ve got an itchy trigger finger, then we’ve got a semi-auto sniper for you. Compact in size and boasting best-in-class fire rate, the Vendetta bridges the gap between the sniper and tactical rifle classes. It packs plenty of range and takes down enemies in just a few taps.

Locus
A little extra power and a larger ammo pool makes the Locus worth considering for any long-range warrior interested in expanding their arsenal. It comes with a variety of scope options – from the standard sniper scope to iron sights to the hovering ELO – for maximum customization. Loadout with the Locus for the opportunity to hit one-shot kills at impressive distances.

Peacekeeper Assault Rifle
Keeping the peace ain’t easy, but you’ve got a good shot with this new assault rifle. Excellent handling and a high fire rate gives this weapon an SMG feel. For enhanced mobility and quicker ADS times equip Stock I and II alongside Quickdraw I and II. While a high base fire rate gets plenty of bullets down range quickly, you can throw on the Rapid Fire attachment to amp up the mayhem. You know, to keep the peace.

Ballistic Knife Karambit
The Ballistic Knife is much more than a melee. It shoots lethal projectiles, taking down enemies in a single hit. If you’ve been hunting for a new way to put together highlight reels, then consider giving this thing a long look. Once you level it up to unlock the Operator Mod, you’ll be able to duel-wield a pair of ‘em.

Nomad 'Privateer'
Nomad’s no pirate, he’s a privateer. It may be a minor distinction, but that does little to deter his swashbuckling ways on the high seas around Contraband or Hijacked. Whether you choose to battle on land or sea, Nomad looks ready to handle whatever is thrown his way.

Ajax 'Great White'
A fearsome creature in the ocean, the reputation of the Great White Shark precedes it. The Great White stalks its prey on the hunt for blood. On the battlefield, Ajax harnesses that same ruthless energy, so don’t make the mistake of getting in his way.

Spectre 'Cuttlefish'
Masked and armed with a voice-modulator, Spectre’s identity remains a subject of much debate. However, what cannot be debated is this Specialist’s top-notch choice of outfit. Light blue up top makes way for kelp-y green down below, with hints of brown scattered throughout. Spectre may not let on much about their personal life. But, if you’re navigating the water, you’d be hard-pressed to find a better lookin’ way to do it.

Zero 'Dark Sails'
When you encounter a tri-cornered hat resting atop a well-worn head scarf on the high-seas, you’re probably looking at a pirate. Zero’s hacking abilities certainly fit the bill of the modern-day digital pirate who navigates the high-seas of the inter-connected online world. And, with this outfit, she’s just as likely to make you walk the plank as she is to cut off access to your bank accounts.

Get Rewarded for Blackout Valor with Medals