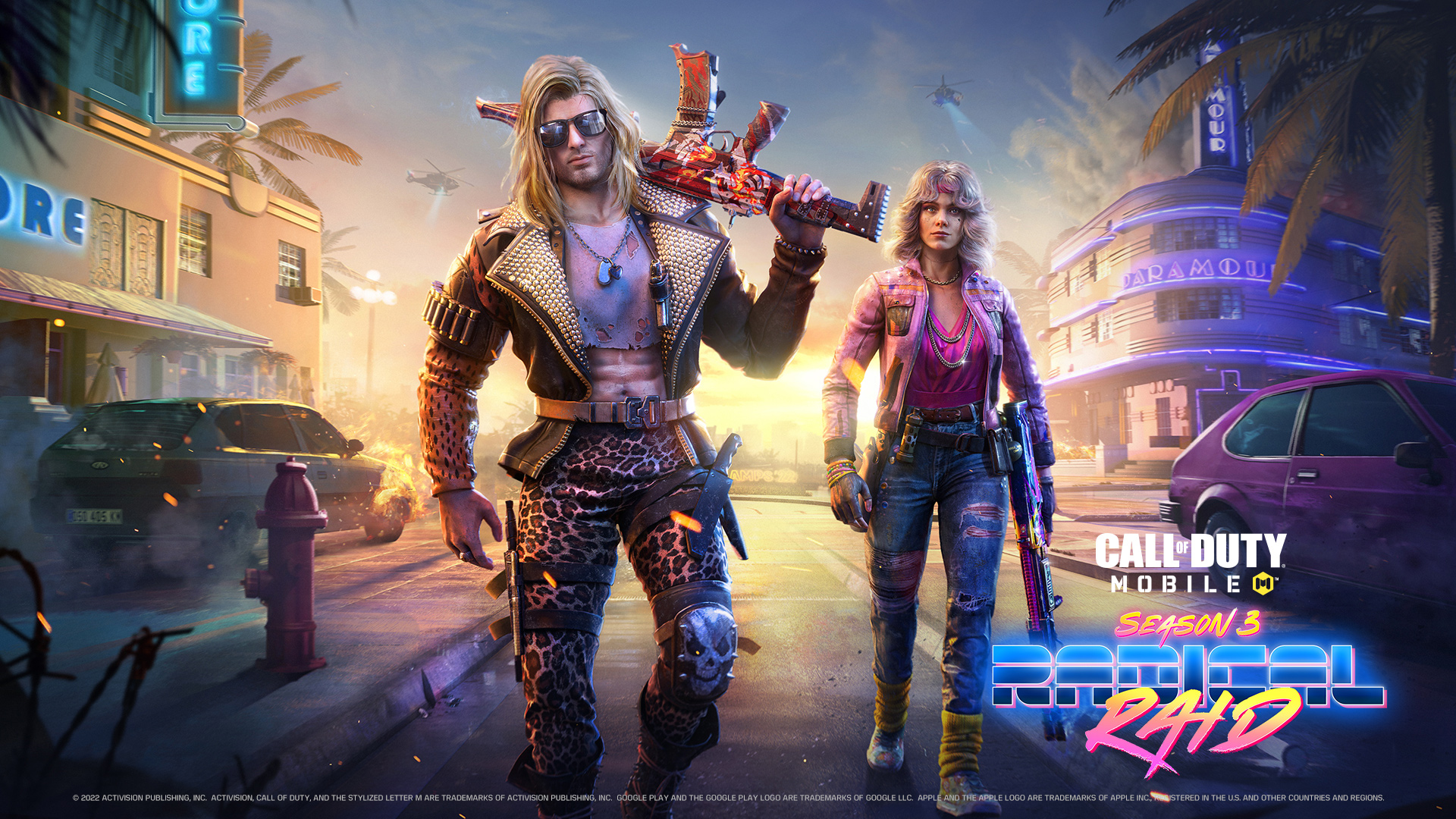 Don those shades and check your lapels, it’s party time. Retro is the name of the game in Season 3, and there’s a whole lot of content coming that’s worth partying for. New Multiplayer maps, the MAC-10 SMG, and the Reactor Core Operator Skill are just a few of the goodies on the horizon. Read on for the rest.

Compete in Style with the Radical Raid Battle Pass 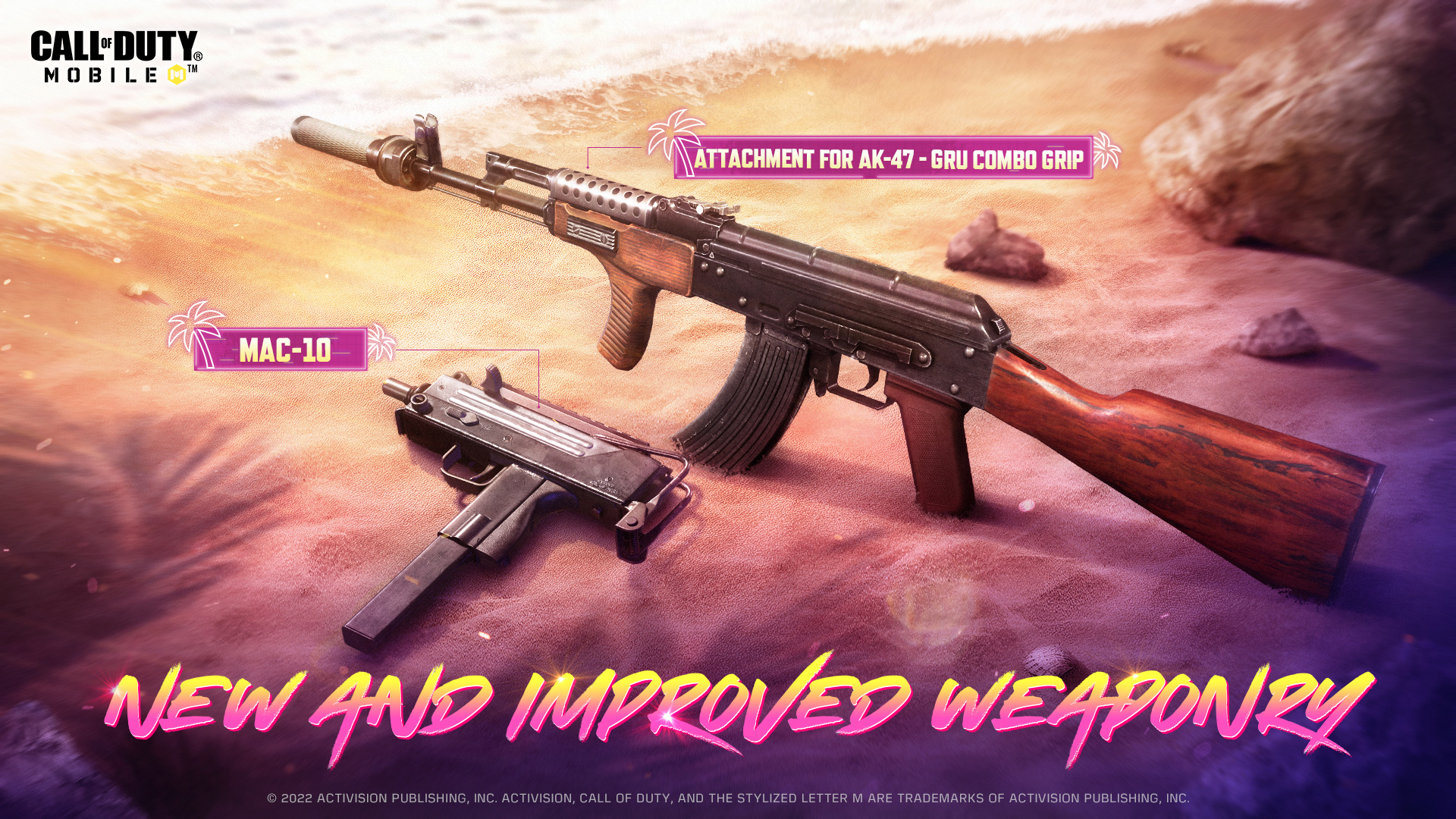 Get the new Reactor Core Operator Skill at Tier 14, allowing you to heat up nearby enemies with persistent radiation damage. At Tier 21, unlock the new MAC-10. This fast-firing, highly maneuverable SMG is perfect for pushing objectives and winning skirmishes in close-quarters combat, where it shines best. Other free items include a variety of camos, Weapon Blueprints, and the Cultural Export Calling Card at Tier 50.

Purchase the Battle Pass for the chance to earn all of the content available in the Radical Raid stream, including a cast of ’80s-themed Operators like Killgore, Gunzo — Clownpin, Park — Glam, and American Bulldog — Chrome Dome. Equip them with new Weapon Blueprints like the HBRa3 — Jaguar 3000, MAC-10 — Banana Blaster, and the Kilo 141 — Hair Metal. 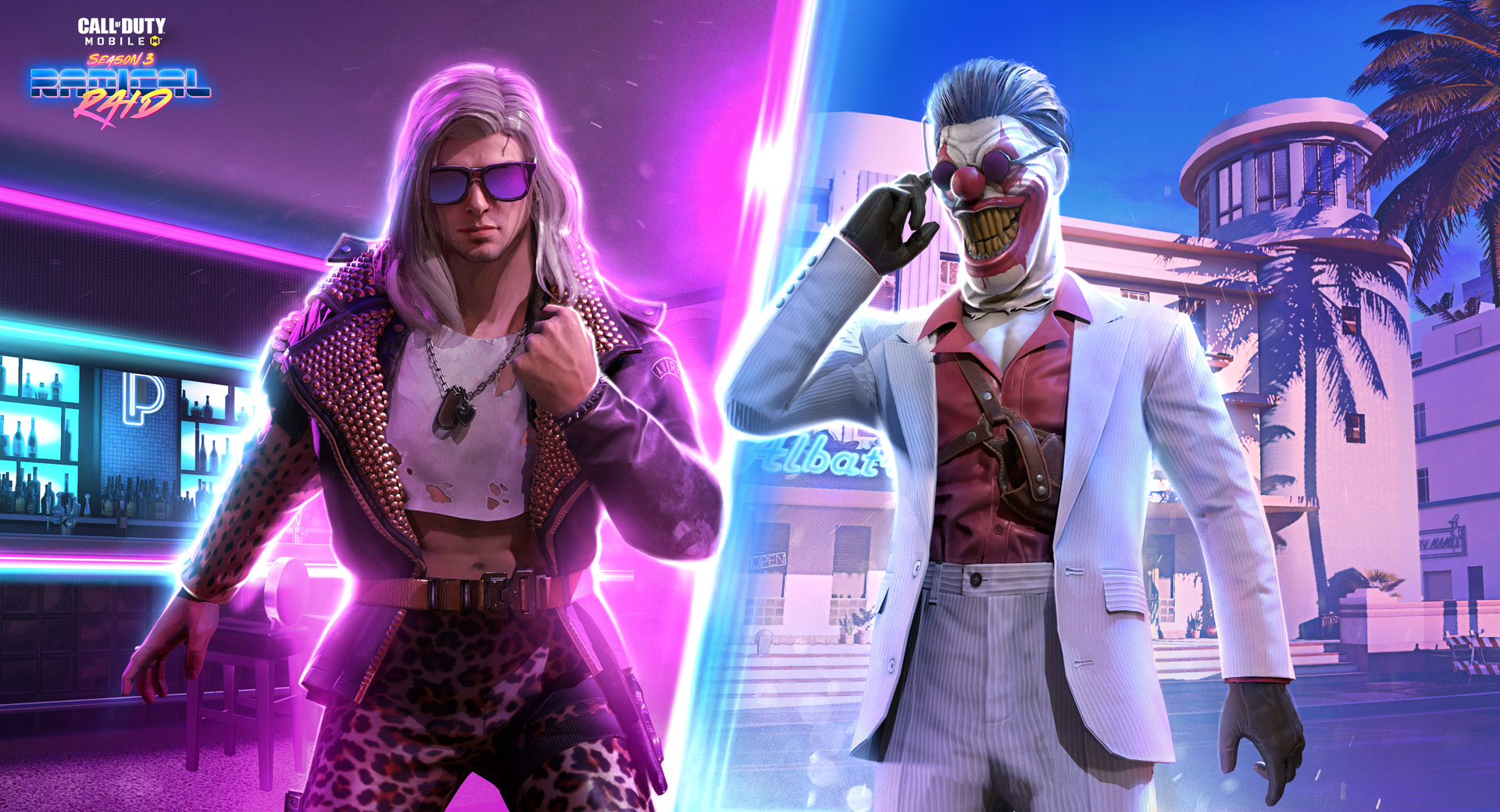 The perfect map to match Season 3’s retro theme, Miami Strike was first introduced in Call of Duty®: Black Ops Cold War as a variation of the larger Miami map. In Miami Strike, the field is more tightly focused to encourage plentiful close-quarters engagements in and around the hotels and parking garage. With cover options everywhere, you can easily switch between offense and defense in a snap, so long as you’re aware of the enemy’s position.

Season 3 adds new functionality to your time at the Practice Range, including more customized training content and weapon data. You can utilize the new Command Panel to customize parameters of the training ground, as well as support target practice by spawning training AI soldiers and customizing their distance, movement speed, interactions, and direction.

You can also keep an eye on their performance with the Player Data Panel, which tracks hit rate, damage dealt, destruction time, and more. There’s also a new Weapon Trial feature which allows you to exchange weapons and attachments directly through the UI. With the ever-growing armory, this makes it easier and faster to swap between your guns.

Expect some quality-of-life changes as well, including better UI performance of in-game scoring and an in-game HUD toggle, allowing you to customize the perspective of the bottom HUD. Season 3 also adds changes to Medals and in-game Medal effects, and provides players with the ability to inspect their weapons on the move.

Following after the HBRa3 – Thunderbolt Sling new attachment last season, in Season 3 we have one more new attachment coming for a fan-favorite weapon. Made exclusively for the AK-47, the new GRU Combo Grip attachment provides a combined barrel and grip for excellent recoil control. 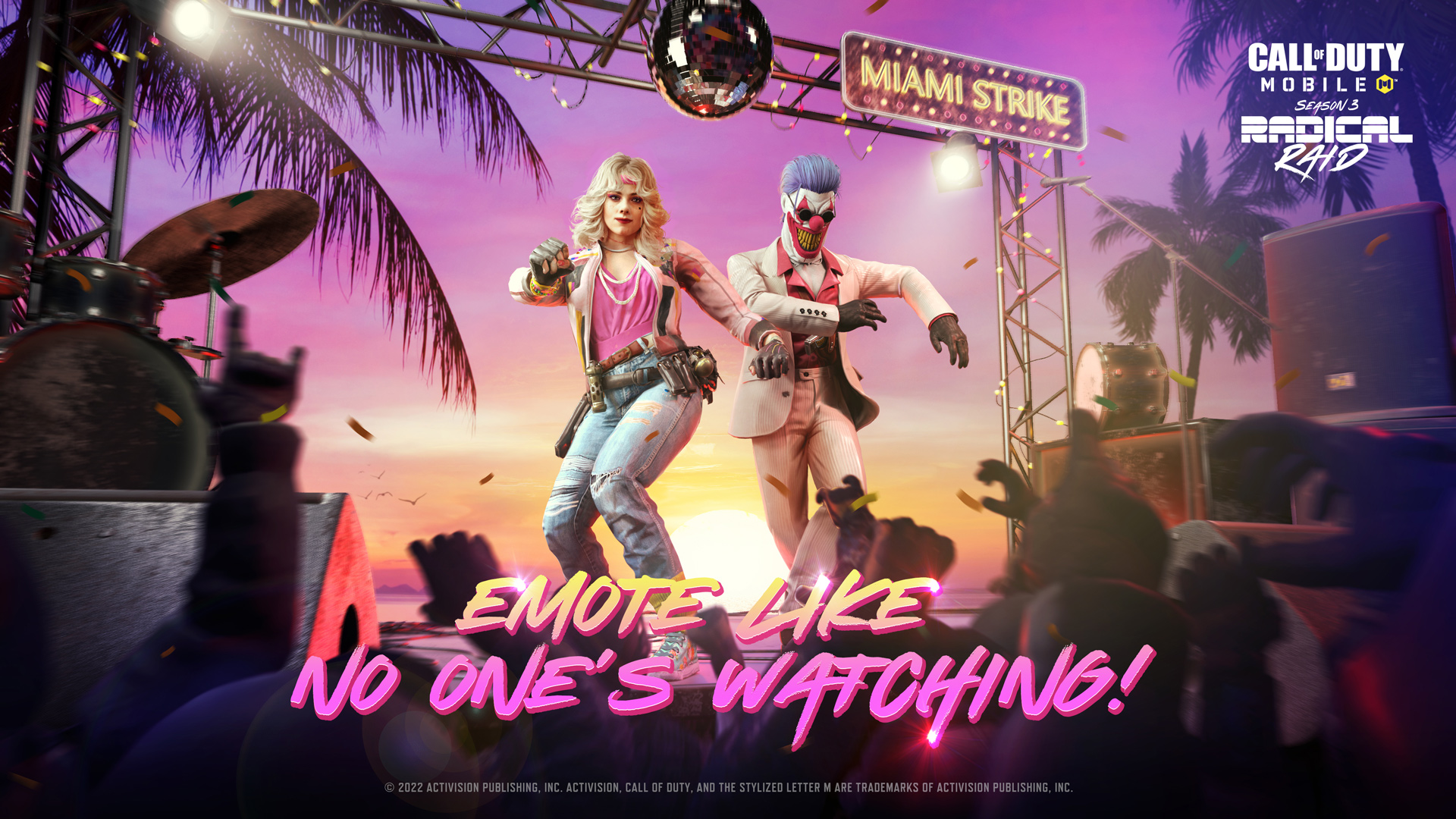 Crime lord Raul Menendez is back in town and living the high life. In this event, Operators must stay on Menendez’s good side by successfully conversing with him and completing tasks. Acquire tokens for doing so, which can be exchanged for rewards, earning major items like the Epic Fennec — Pure Fury and the villain himself with the Menendez — Safari Fashion Operator Skin.

Season 3 offers a fresh set of Season Challenges, too. Complete the tasks to earn rewards like new Weapon Blueprints, Operator Skins, and up to 30,000 Battle Pass XP to move swiftly through the tiers. Expect some unique high-quality rewards through specific challenges, like the BR Heat challenge coming mid-April that rewards the Epic Swordfish — Mechanical God. This is also the way to get your hands on that new AK-47 attachment through the Popular Arms Only challenge launching early April. 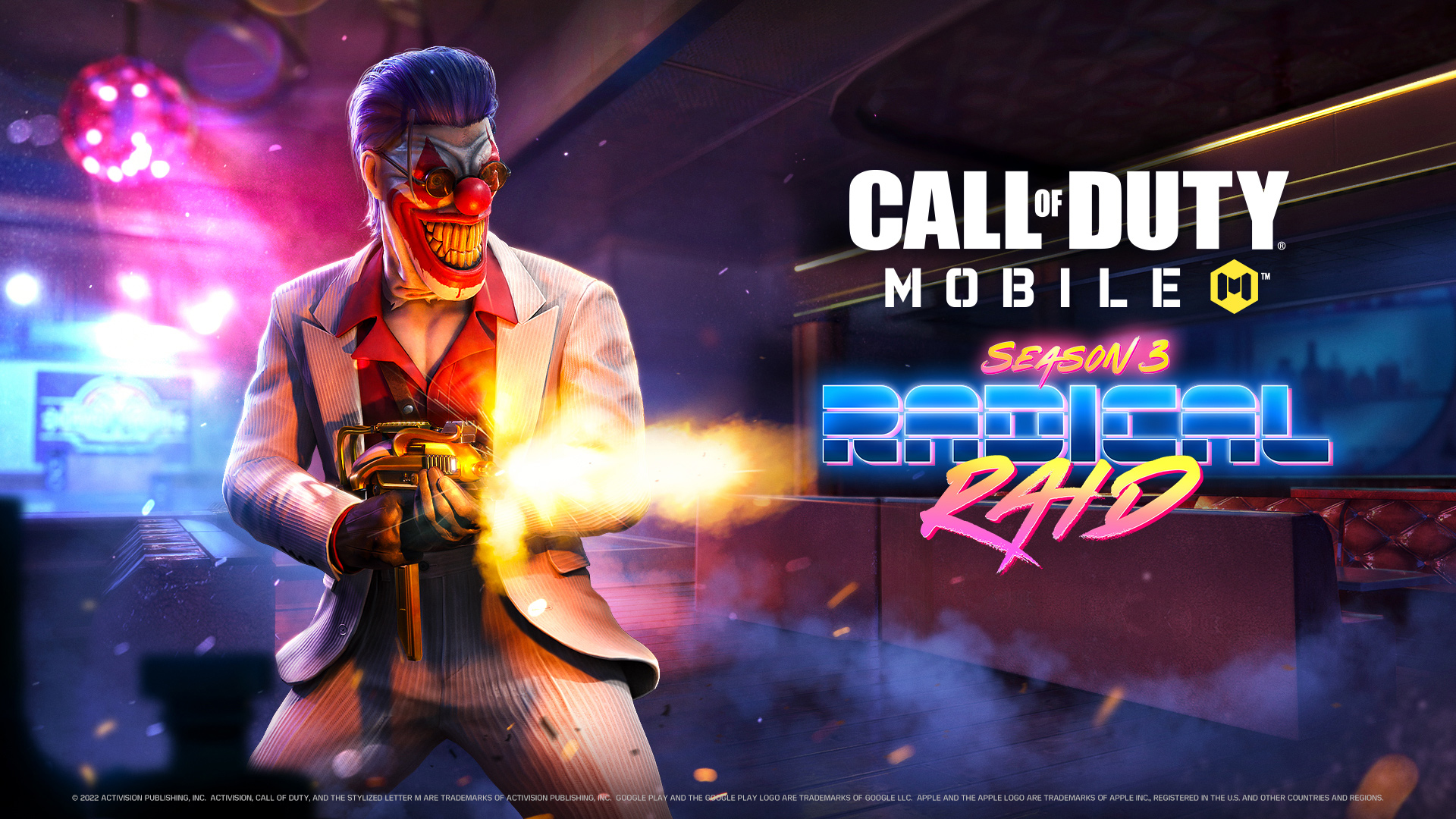 Get Rewards in the Easter Battle Royale Event

Get into the holiday spirit with the Season 3 with new events in Battle Royale and Multiplayer.

In Battle Royale, hunt down destructible Easter Eggs that can be blasted for rewards. Visit the holiday vending machine to exchange your goods and purchase the resurrection beacon from the rabbit NPC to bring a teammate back into the fight. Acquire Battery – Fresh and several BR specific camos by completing the I Am The Egg Man featured event tied to this.

In Multiplayer, Easter Prop Hunt returns along with the Eggs in a Basket featured event accompanying it. Turn into eggs and other Easter props and outwit the competition to earn new camos like the Arctic .50 — Fresh, MW11 — Fresh, and the Smoke Grenade — Groove Lens.

The Trap Master’s Electric Trip Wire ability is seeing a rework in Season 3. Instead of the triggering range being displayed as a straight line, it will now display as a sphere. Enemies entering the sphere will first be slowed, and, after being inside the sphere for a period of time, will trigger the explosion, though savvy players can disassemble the trap to prevent triggering it at all.

With over $2 million in prize money, this is set to be an epic year of competition in the Call of Duty: Mobile World Championship 2022. Designed for players of all skill levels, Stage 1 and Stage 2 of the World Championship 2022 are open to eligible entrants across the world. Each Stage 1 weekend from March 31st through April 24, 2022 UTC, players can earn regionally themed Street Cred weapon camo’s and epic operators. All players who sign up to compete will receive an all-new frame and calling card. 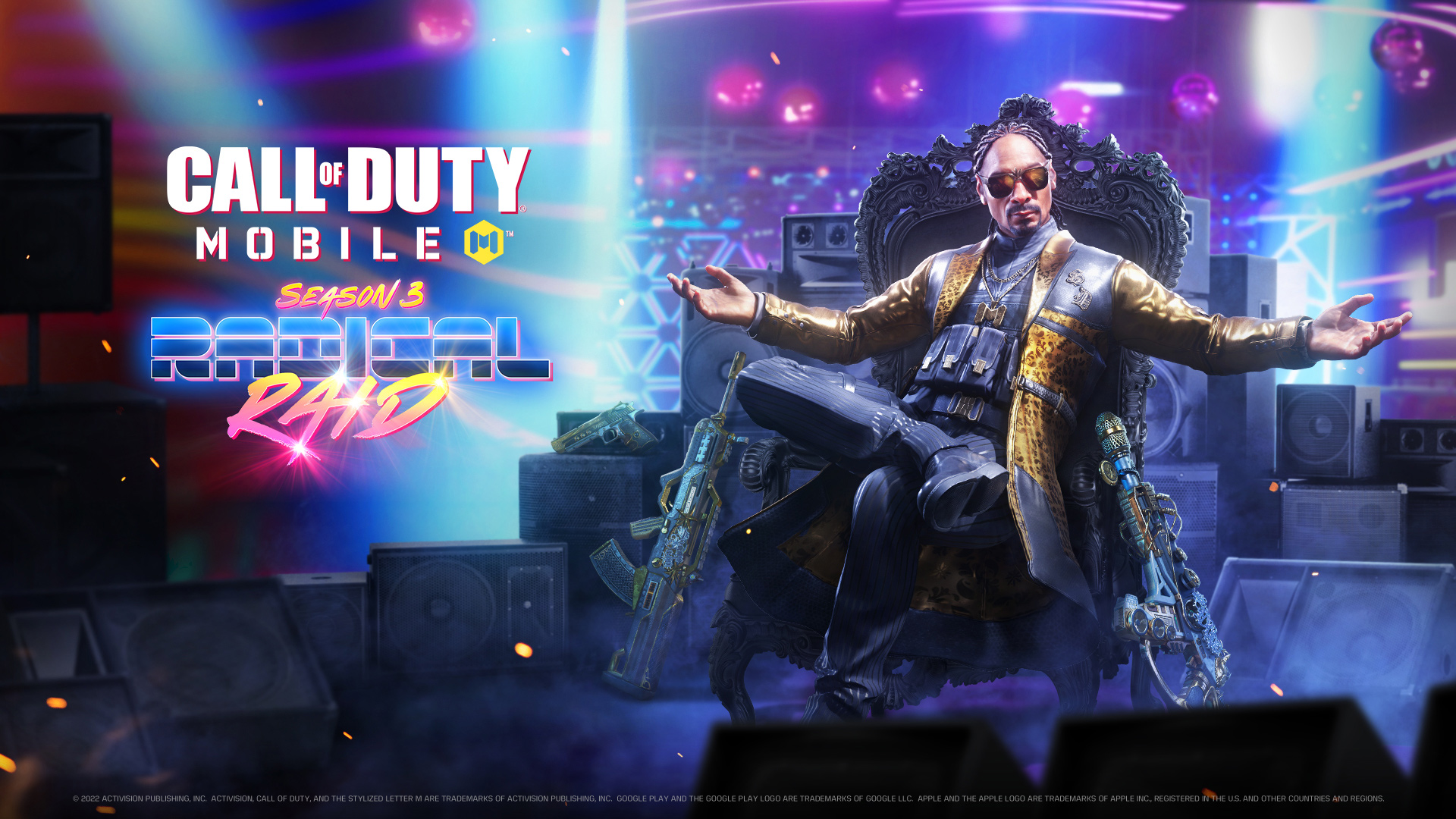 Two very special Operators are joining the fight, bringing their favorite weaponry with them.

The ultimate closer, Snoop Dogg, makes a special appearance in Season 3, complete with his own Operator Skin and Weapon Blueprint. Dressed to the nines and ready to compete, he wields his trusted SMG RUS-79U — Equalizer, featuring a titanium and carbon frame with diamond inlays and its own Death Effect that transforms players under a magnificent beam of light.

Next, we have Scylla — Light Runner, a Brazilian soldier straight out of an ’80s arcade who’s been around weapons her whole life. After saving the Brazilian president, she was awarded a Mythic AK-47, an experimental weapon made of synthetic diamond that converts physical ammunition into photonic energy. Get both later in April.

Other Store items include Spectre — Leveled Up with their Legendary HVK-30 Weapon Blueprint, Portnova — Fitness Instructor and her custom Legendary AK117, Artery — Jammer with a Legendary take on the MAC-10, and the brand-new Operator Kui Ji with a very deadly Rytec AMR.

The party is just about to get started. Get ready to join in when Season 3: Radical Raid launches on March 30 at 5 PM PT.