Make any weapon YOUR weapon.

Everybody gets the same baseline of weapons in this game. Anybody above Rank 27 can whip around a corner and hip-fire a Waffe 28 SMG in the face of an unsuspecting enemy. All it takes is achieving Rank 19 to access the steady-firing Toggle Action Shotgun and wreck house with it on Pointe du Hoc. The weapons are for everybody. But, how they look? That’s for you. It’s where you show you’re more than just a gamertag racking up kills by the handful. You’re someone who knows how to look good while you’re doing it.

With that truism in mind, we present the crucial C’s of customization: Charms, Camos & Reticles. Sure, the last ‘c’ is in the middle of Reticles but, good things come in threes and ‘CCR’ is trademarked. This will be a check-in with some weapon loadouts we’ve recently taken a shine to, been killed with in a match or seen in the Bronze Star replay. The options are endless, but here are three of our current favorites we’ve been rolling with into battle.

Ignoring the rest of this section, the Lewis is an LMG we often default to because of how much we love it. The English Oak variant has the scuffed-up feel of a battle-tested heavy weapon and the Turquoise Camo doesn’t overpower that feel. It accompanies all of the scratches for an aesthetically pleasing look that just looks right. Throwing a Reflex Sight on it with the green Spark Reticle only enhances your accuracy. We read somewhere that the human eye recognizes the color green quicker than any other color. While that feels like something you read on social media that’s meant to sound true enough to never question, for our purposes, we’ll just assume it’s 100% accurate. Anecdotally, we like the Spark, so, why not justify it with some junk science? The Mogul Charm gives the whole loadout a posh, upper-crusty touch, as though a true baron or captain of industry stamped this Lewis with their approval. 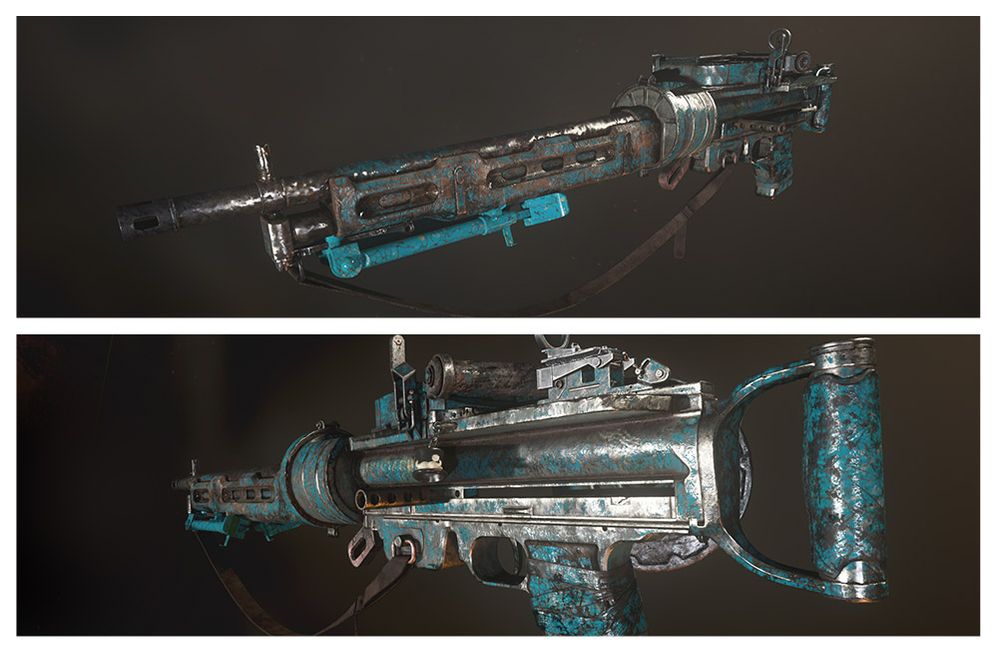 Like most Heroic variants, the Righteous II looks fantastic on its own. Fine detailing from the butt to the grip gives this Type 100 a hell of an upgrade. Fortunately, the Candy Apple Camo does nothing to distract and only serves to highlight the craftsmanship this variant possesses. Because of the better-than-most-SMGs range the weapon packs, throwing on a Reflex Sight makes good sense. We prefer the blue Menace Reticle for best enemy-spotting. It’s small enough to not over-power your view of what you’re shooting at and the blue complements the sharp red of the Candy Apple. If you’re American, it’s patriotic. If you’re not, it just looks good. Polishing it off, we have the dangling Talon Charm grasping a marble. The talons are yours and the marble? That’s anybody who’s ever dared cross you. It’s a powerful statement. 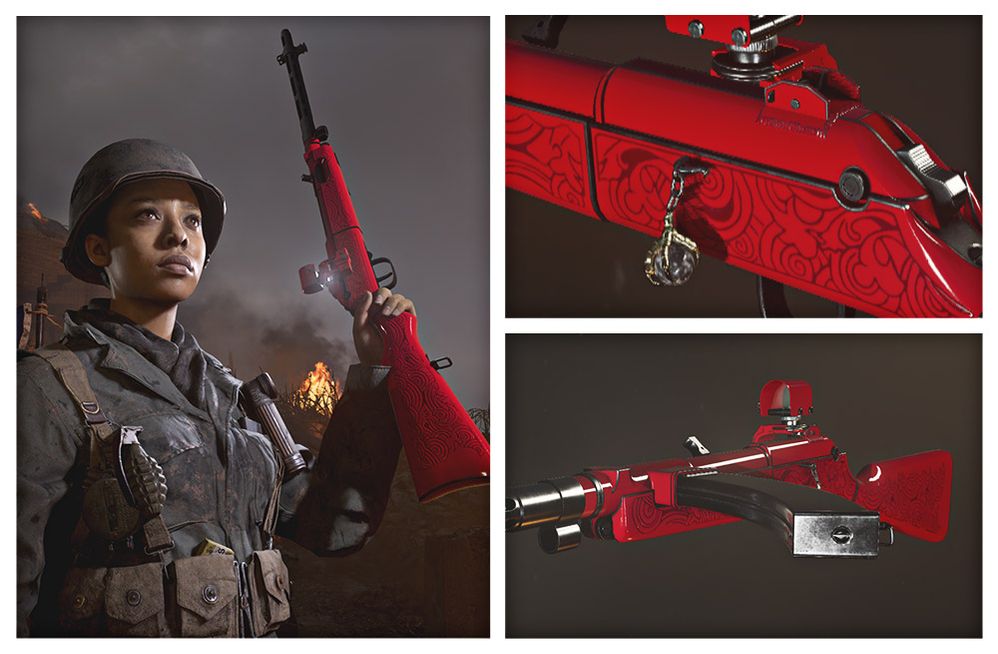 The classic, M1 Garand is a semi-auto you can set your watch to and it should be a part of any MP player’s regular rotation. It dishes out two-shot kills and impressive range with deadly accuracy. And, the Front Line II is, simply, a gorgeous variant. It’s polished with laced-up leather by the butt to comfort soldier shoulders from weapon kick. The Ruby camo comes from Captain Butcher’s Blitzkrieg gear haul and it looks as good on this weapon as any of them while keeping the accents of the Front Line II intact. The M1 boasts range for days and a 4X Optic can bring those far-off foes into focus. The Gambit Reticle helps you center your aim exactly where you want without obstructing what you’re trying to get a good look at. Like the weapon to which it’s affixed, it’s simple, no-nonsense and just gets the job done. And what better way to rub it in the face of vanquished opponents than to have a Salt Charm handy. Who’s saltier than someone who just watched you pick them off with a Ruby Camo’d M1 in the killcam? We talked it out for a few hours and, other than that loud kid who didn’t get Szechuan Sauce, we couldn’t think of anyone. 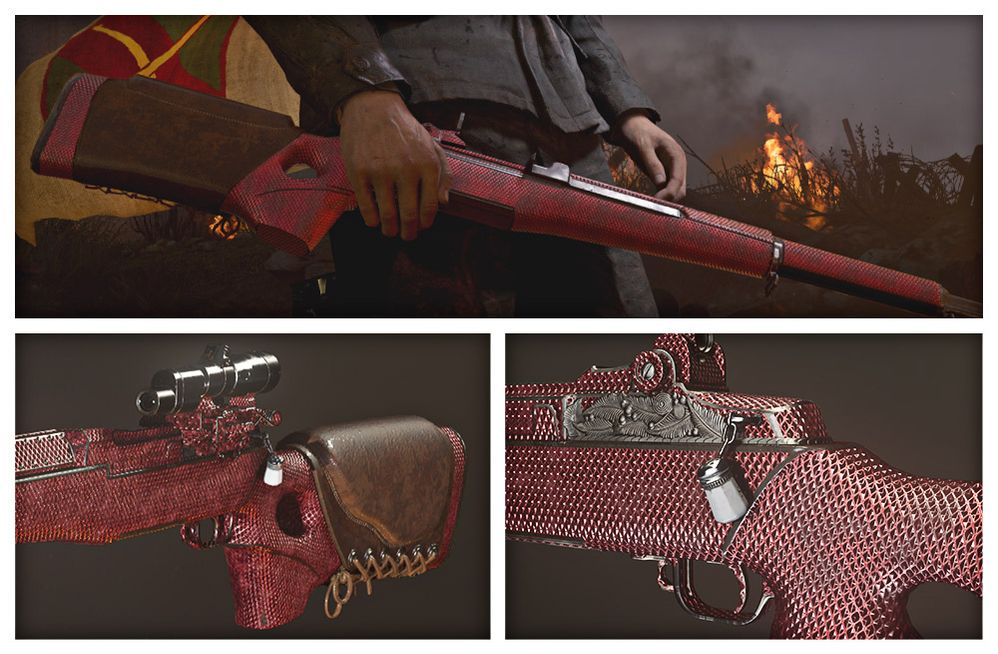 These are just three options. With all of the Charms, Camos and Reticles available, you could go nuts with all of the choices at your disposal. If you think these weapon loadouts aren’t up to your standards, prove us wrong! Take a capture of your favorite loadouts and post them and we’ll feature some of our favorites in the next edition of the 3 C’s.