In Call of Duty: WWII, the fun is Infectious.

With Attack of the Undead in full swing – and Doktor Straub’s undead army skulking around HQ – it’s high time to bring back a Call of Duty® community favorite: the Infected Multiplayer mode!

The match begins with a short countdown until one player is randomly ridden with a sinister, Undead disease – the first “Infected.” Those remaining become “Survivors,” who must fend off the Infected to avoid becoming Infected themselves. Once Infected, your goal is to Infect as many Survivors as possible before the clock runs out.

If you are “Patient Zero,” the first Infected, everyone will want to give you a wide berth like you’re the smelliest girl at the dance – though they may get a little jealous when they see the sweet (and infectious), bone-handled Fire Axe you spawned with.

Make sure you land as many one-hit- as possible from your Fire Axe – and you’ll be passing the Infection faster than the fruit punch at Junior Prom passed me mono.

Then, Squad Up
Once there are a few Infected in the match, band together to take down the Survivors. If a group of you attacks at a time, you may force your target to panic and start spraying bullets ‘til their clip clicks. When they pause to reload is when you should make your move. And soon, there’ll be one more Infected on your team!

Make the Most of Your Abilities

Each Infected player will have a Tactical, rather than any Lethal or Tactical Equipment, in the from of a  smoky skull effigy. Drop it in spots around the map where you know Survivors tend to congregate. If you’re killed, you’ll respawn where you dropped your Tactical Ability – hopefully right on top of a group of Survivors.

And like German fighter pilots at the Pervitin factory, Infected players also have unlimited speed. So, take the normies down fast and then hit the road. You may be the smelliest kid at the dance, but all your foes will be smelling you later. 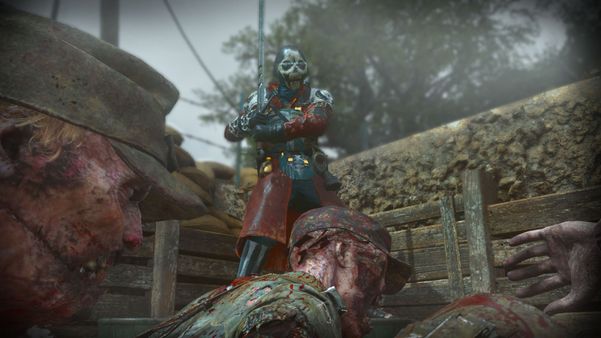 You’re Not Camping – You’re Hunkered Down
Sure, we call it “camping” when you’ve got a Sniper Rifle and a corner all to yourself, but no one can get too mad at you when you only have a Melee and an incurable disease (shhh .. it’s not your fault). Choose an unassuming spot with good camouflage and wait for a potential attacker to stumble into your mini-map – and Infect ‘em.

For Survivors
If you’re a Survivor, you will spawn with a Type 100 SMG and Standard Combat Shotgun for powerful fire – but don’t get too cocky. Bringing a gun to a knife-fight doesn’t mean you’re primed for the Victory screen; as the Infected slowly begin to outnumber the Survivors, it becomes quite easy for them to track you down and swarm.

So, Use That Equipment

Instead of choosing their Lethal and Tactical Equipment, Survivors get S-Mine 44’s (known lovingly as Bouncing Betties) to plant around the map. If they’re detonated while the Infected are near, these would-be Infectors will be sent 30 meters into the atmosphere.

Then, look for Care Packages. Every 30 seconds, Care Packages will be dropped in for Survivors, containing one of three potential killstreaks or usable items. On the lineup is the stealthy Trip Wire, the powerful V2 Rocket and the ever-favorite Flamethrower – all extremely useful for stopping more than a few hostiles in their tracks.

And if you make sure to keep moving, while checking your periphery often, you’ll be leaving the match with a clean bill of health.

No Matter What Side You’re On …

There’s a reason why Infected is a Call of Duty fan favorite. It’s a high-stakes scramble that turns regular Multiplayer inside-out – but now with the sort of Zombified thrills injected in the fray that could only be the work of Straub’s evil army.

Don’t miss out on Attack of the Undead’s newest mode, Infected, and definitely don't skip its appearance in the Featured Playlist. From June 1 through June 4 10 AM PT, you'll earn Triple Double XP - that's Double Weapon XP, Double Division XP and Double Soldier XP for an enture weekend.  And keep your eyes peeled for more Undead-themed modes rolling out over the next few weeks!