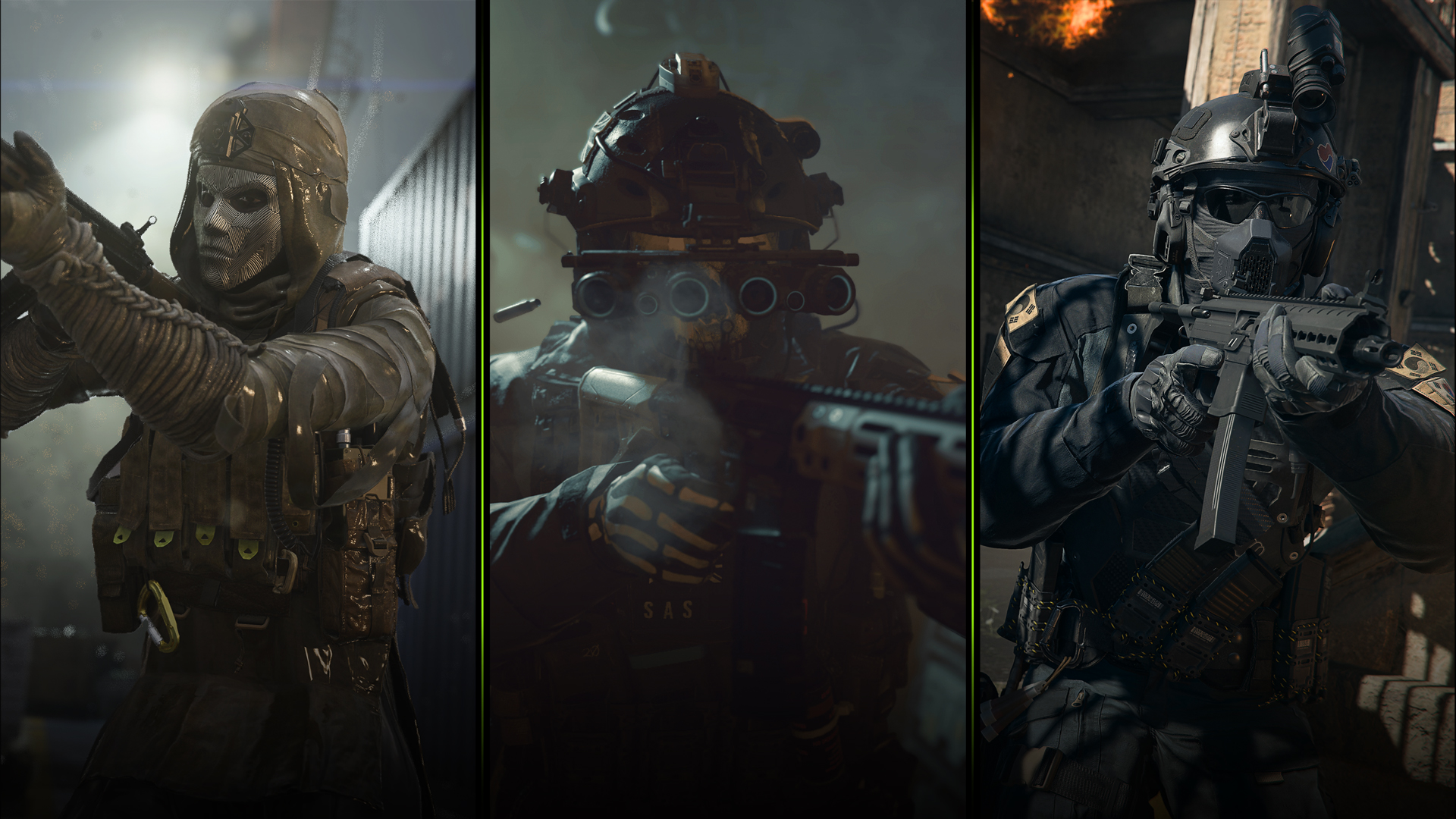 For the first time ever, there is one unified engine across Call of Duty®, beginning with the release of Modern Warfare® II and Warzone 2.0.  And it’s this next-generation engine, which first debuted with the original Modern Warfare® (2019) that will deliver the most advanced Call of Duty in history. Inspired by this cohesive development engine, the developer teams set out to take on these new challenges. In this piece, we spotlight four of the many gameplay advancements that players experience in Modern Warfare II.

Image on left shows dynamic interactions with water where the wetness looks realistic. Image on the right is without procedural wetness.

One of the first things gamers notice – and react to – when they enter the new battlefield in Modern Warfare® II, is that water is not simply set-dressing or yet another barricade. Players can (literally) dive in, move around, and use water as a tactical advantage. And to make that work, it had to look and react as real as possible.

“We spent a ton of time working with designers, trying to find ways of making sure water is perceptually plausible and realistic,” Drobot reveals. “Our goal is to mimic effective CGI in movies: you know that CGI is good when you don’t actually notice it.”

In Call of Duty: Modern Warfare II, water is not just a background aesthetic. In fact, it is so integral to the environment that the dev team has already noticed that it inspires and impacts emergent gameplay, even in the Beta testing stage.

This new system is so robust, it can even inform gameplay tactics. “In teamplay, you might actually learn the enemy team came through the flooded tunnels, because they’re dripping wet,” Drobot hints.

To that end, Drobot and his crew literally implemented a complex new system, which allows every object in the game to get soaked, with variable effects on looks and performance, and then eventually dry out based on the type of material. 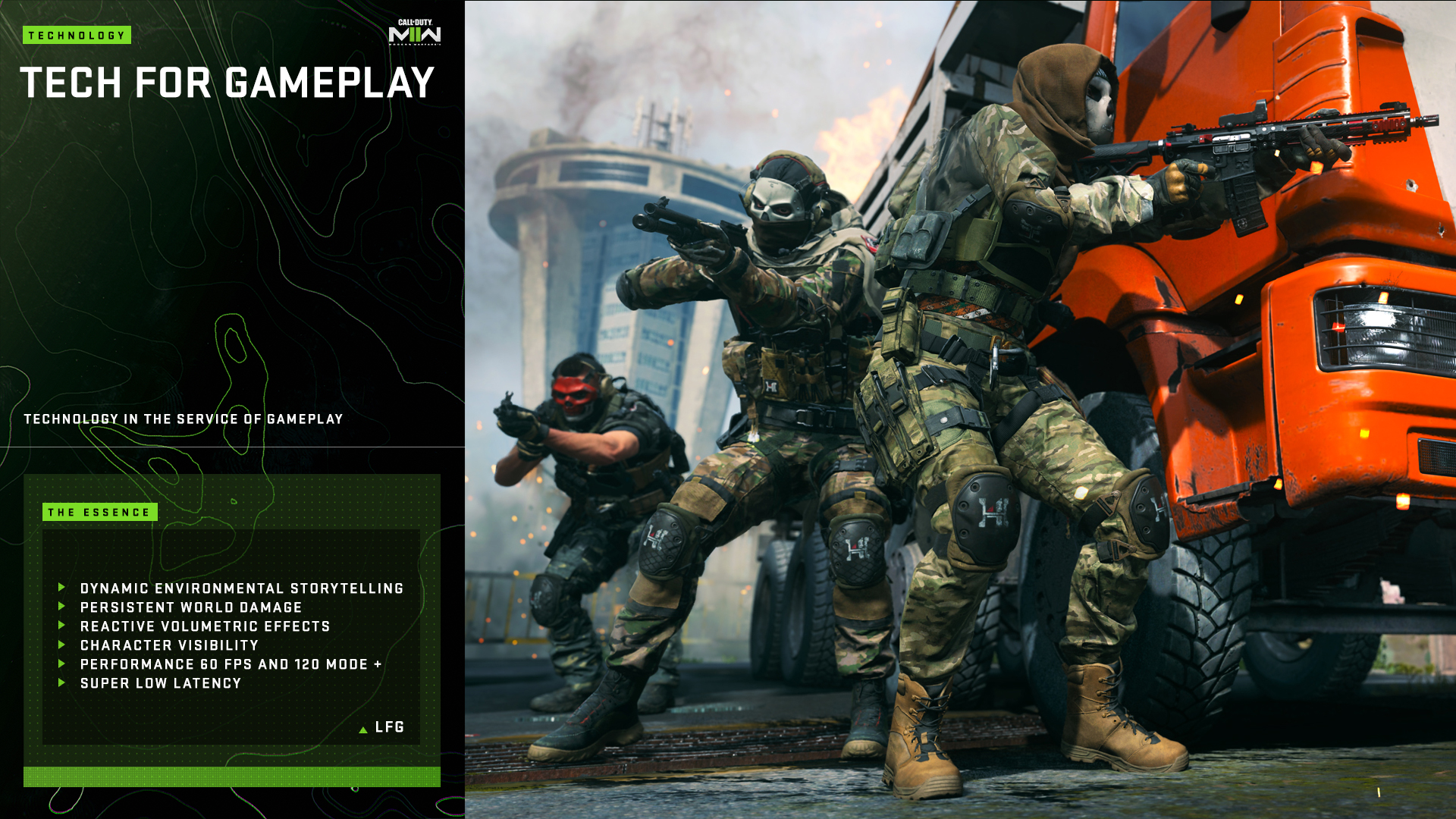 Technology in service of gameplay. That’s the essence of it.

Despite the extra processing power available to the latest PCs and consoles, the development teams approach the latest hardware with a substance-over-style mentality: “If we have a choice of using something shiny and fancy that’s not going to improve gameplay, we try to avoid it. It’s about gameplay first. So next-gen consoles for us, first and foremost, mean improved visibility, improved clarity for the players, improved latency and then improved performance.”

“Outside of the obvious benefits next-gen consoles offer, like higher resolution and more stable streaming, there is also visual clarity and performance,” says Drobot. “The Call of Duty hallmark performance level is 60 frames per second -- the latest consoles can deliver a stable 120Hz. This is actually quite impactful for more competitive gameplay. Even casual players won’t have much trouble spotting the difference between those two modes—it’s definitely much more fluid in 120Hz.”

The devil's in the details and in this case, the studio has sought to ensure that no detail is too small or overlooked. “We worked hard to optimize the game to run at 120Hz with higher clarity and resolutions, and then asked ourselves: what’s left? If there’s any extra horsepower we could use, we’re going to use it to improve the visuals even further. So, we added higher quality shadows and textures. Basically, everything that we can notch-up in terms of quality, we did. And there’s a handful of features exclusive to the next-generation consoles. Perhaps most notably, the water rendering we mention above.” 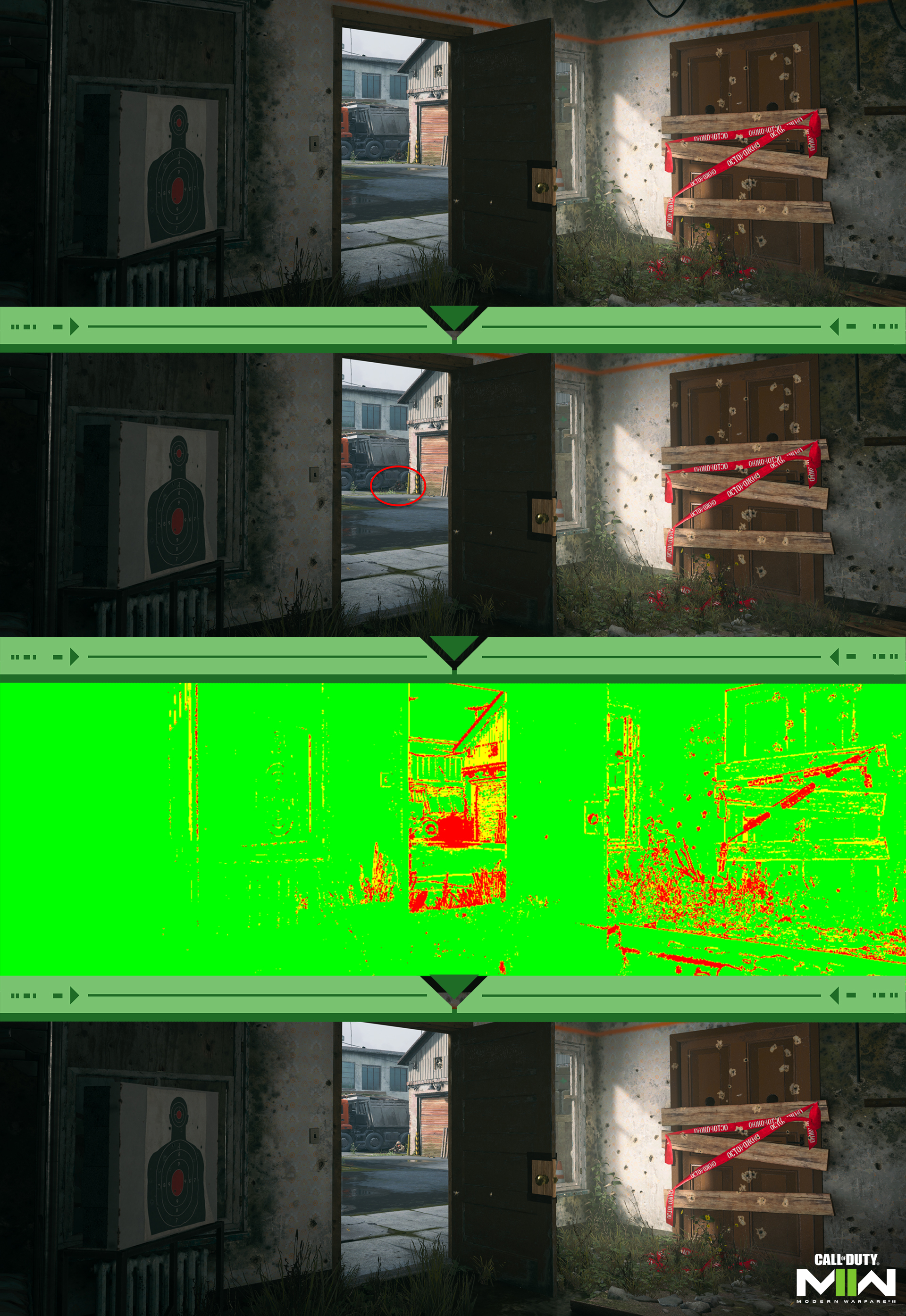 We use multiple runtime systems that analyze the image, as our eyes would, and provide subtle but important visual cues to improve player visibility and the ability to track moving targets. In the bottom image, you see the player pop up

In an intense multiplayer experience like Call of Duty: Modern Warfare II, an age-old challenge that developers must overcome is character contrast and visibility. Basically, addressing the risk of characters blending in with the environment, particularly from a distance. “What do you do if you have a dark corner of your map, and you have someone hiding there who has a dark character skin?” Drobot asked his team. “Or, what do you do if you’re in a dark room and looking outside into bright conditions, and you have someone using a skin that’s very bright?”.

Infinity Ward has developed a system that visually tracks players and their environment to automatically correct for contrast. “We are doing a lot of processing that an actual human perception systems does,” Drobot explains. He adds, “In our game we know where all the players are, but we don't always know how they actually look to you as a player. So, we analyze the image, the lighting conditions, the type of character skin, or how the character actually looks, and try to make sure they’re contrasted dynamically depending on the situation.” 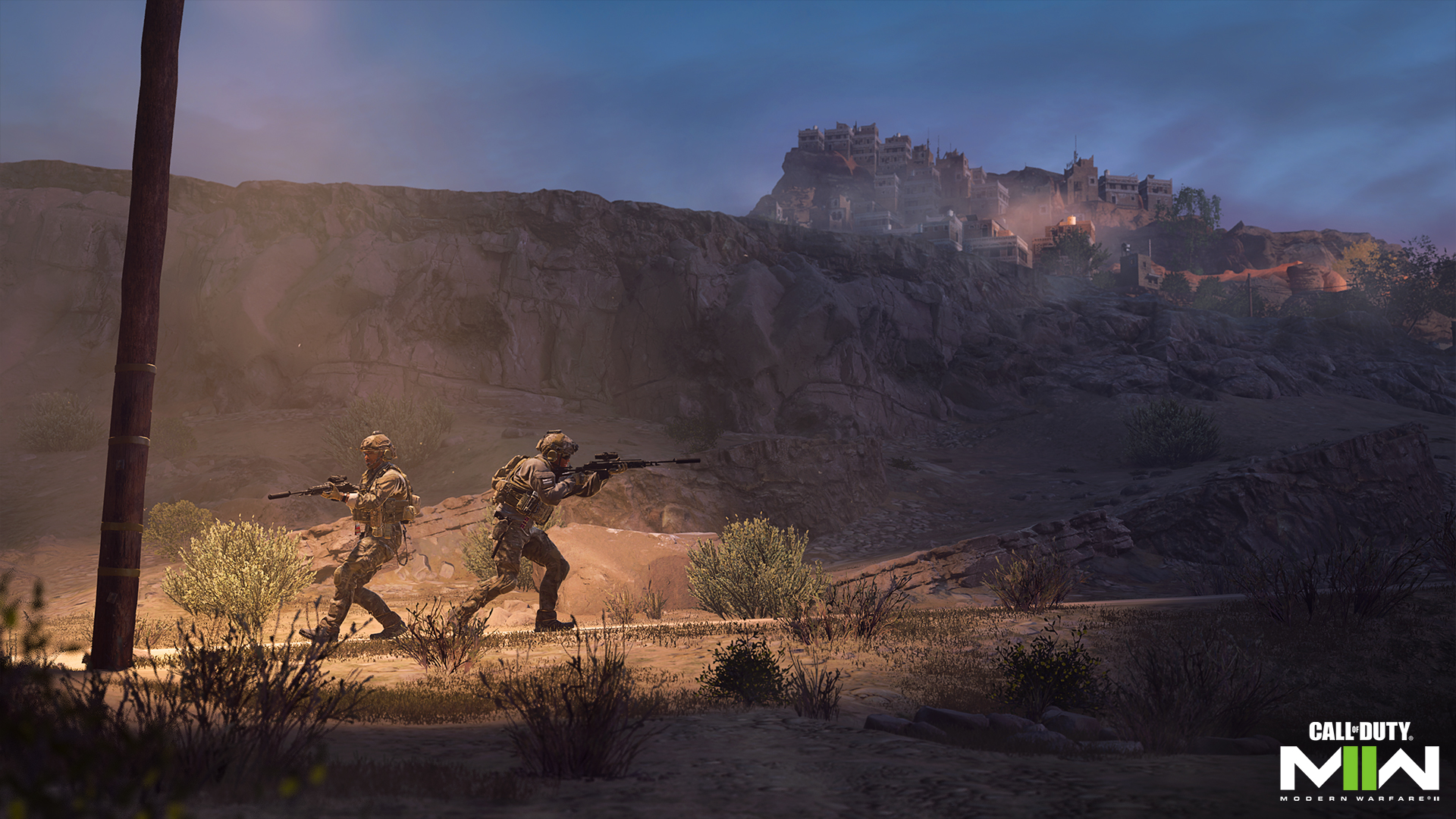 A big question the team faced, that Drobot shared, was, “How do you keep the game looking fantastic visually, while at the same time also still be a shooter that’s more about player skill, and not about something interfering with your gameplay?”

“Obviously, player characters should get the highest resolution,” Drobot emphasizes. “So, whether you’re playing in HD, Ultra-HD, or 4K, we can still throw more resolution in a specific part of the screen, just to make sure that that enemy and environment appear more clearly to you.”

By focusing on several little things, Infinity Ward and Modern Warfare II developers have still managed to stay focused on the big picture: to thrill gamers. Each technical upgrade and improvement was made with a painstaking commitment to ensuring the best gameplay experience, regardless of console or platform. After all, in the heat of battle it’s the gameplay that will always matter, whether you’re a hardcore fan or a franchise newcomer.

Modern Warfare II is already off to a great start.  And now that Warzone 2.0 is available, we will return soon to take a deeper look at how the advanced Call of Duty tech is powering the next generation of Warzone.

In addition, be sure to visit the Infinity Ward website for more news and updates directly from the studio. Call of Duty: Modern Warfare II and Call of Duty: Warzone 2.0 are published by Activision. Development for both games is led by Infinity Ward with additional development support provided (in alphabetical order) by Activision Central Design, Activision QA, Activision Shanghai, Beenox, Demonware, High Moon Studios, Raven Software, Sledgehammer Games, Toys for Bob, and Treyarch.

Advance through the AO your way in an all-new Battle Pass system. Expect the same great rewards — free functional weapons and access to 100+ items via Battle Pass upgrade — with more choice on how and when to earn them.

The Mission: Detailing the map, tactics, and tips for a 6v6 Multiplayer map set in a live fire training range.

Call of Duty®: Modern Warfare® II and Call of Duty: Warzone™ 2.0 Season 01: Everything You Need to Know, Including DMZ

Get Ready for a New Era — the launch of free-to-play Call of Duty: Warzone 2.0 and its much-anticipated DMZ mode, the debut of reimagined community-favorite maps in Modern Warfare® II Multiplayer, and the lead-up to the Special Ops Raid all highlight Season 01, the ultimate kickoff to an incredible year of content.