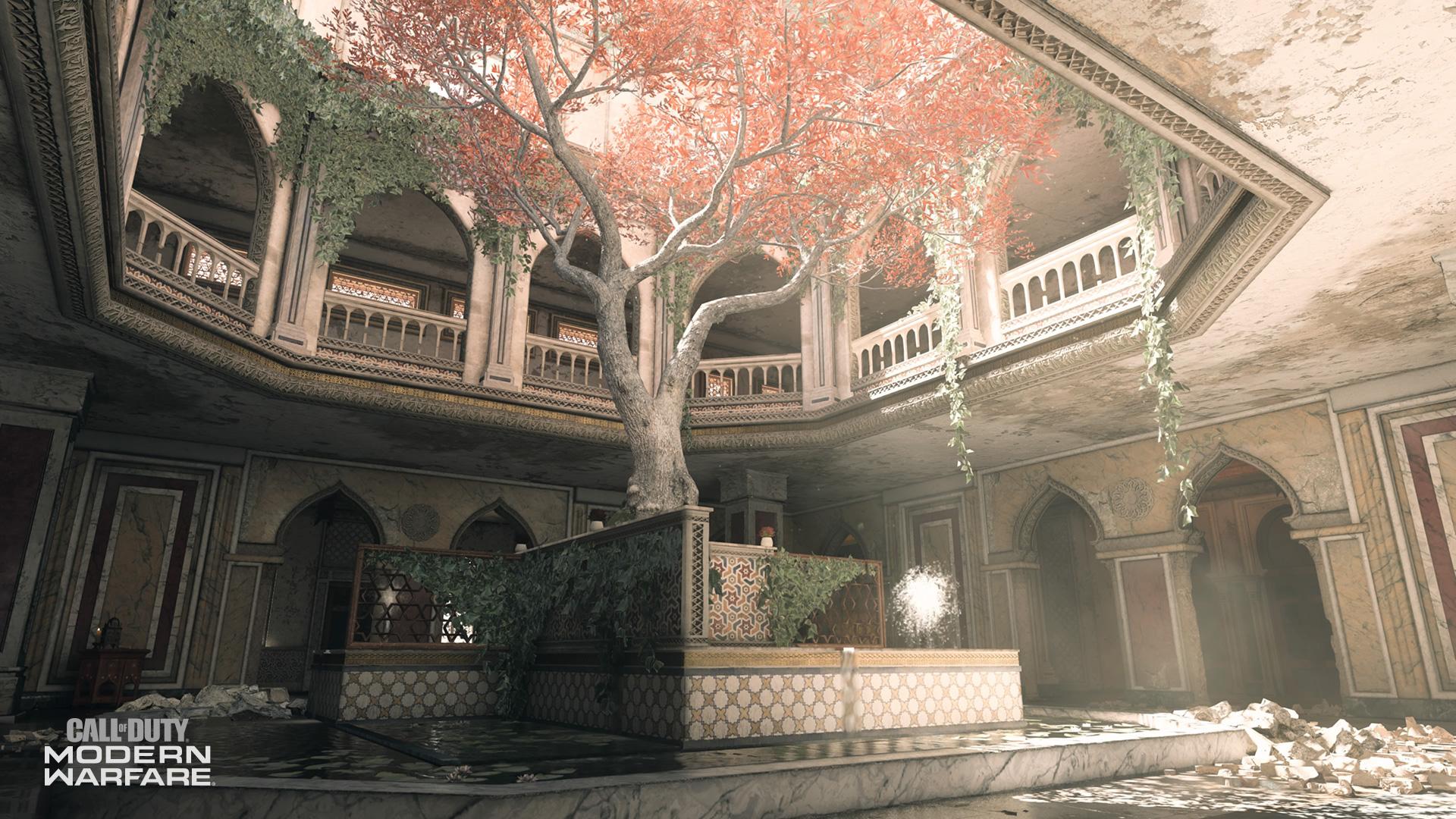 Join us in the grand palace of Urzikstan for a complete breakdown of this easy to learn, difficult to master map.

Join us in the grand palace of Urzikstan for a complete breakdown of this easy to learn, difficult to master map.

Gunfight maps, by design, are the smallest locales out of everything in the Multiplayer map pool. While these maps may be small, the best operators in the world know that games can be won and lost by learning every inch of their surroundings.

And that’s why we’re here to break down these new Gunfight maps, starting with Atrium.

Here’s what you need to know to bring down some malice on your opponents the next time you’re in this palace.

Atrium is, as the name suggests, an open-air central courtyard in a large palace located within Urzikstan. This entire space is adorned with beautiful marble stonework; you can see plenty of intricate designs on the floors, ceilings, and walls of this beautiful area.

While the place appears to be long-abandoned – the walls and designs show some weathering – its ancient charm seems more attractive thanks to the ivy growing along the walls.

Around the room are either lounging areas with couches, construction material that may have been used to refurbish the palace, or ceremonial candles. You could imagine that this whole place is wafting with the smell of faint incense, as several ornate burners are amid dripping white candles on octagonal tables.

In the middle of this spacious room is a large deciduous tree sitting atop a running fountain that includes a koi pond. This tree, as well as the fish, might be enjoying the sunlight peering in from the bombed-out cracks in the atrium’s ceiling, which came as a result of the ongoing war in the country. 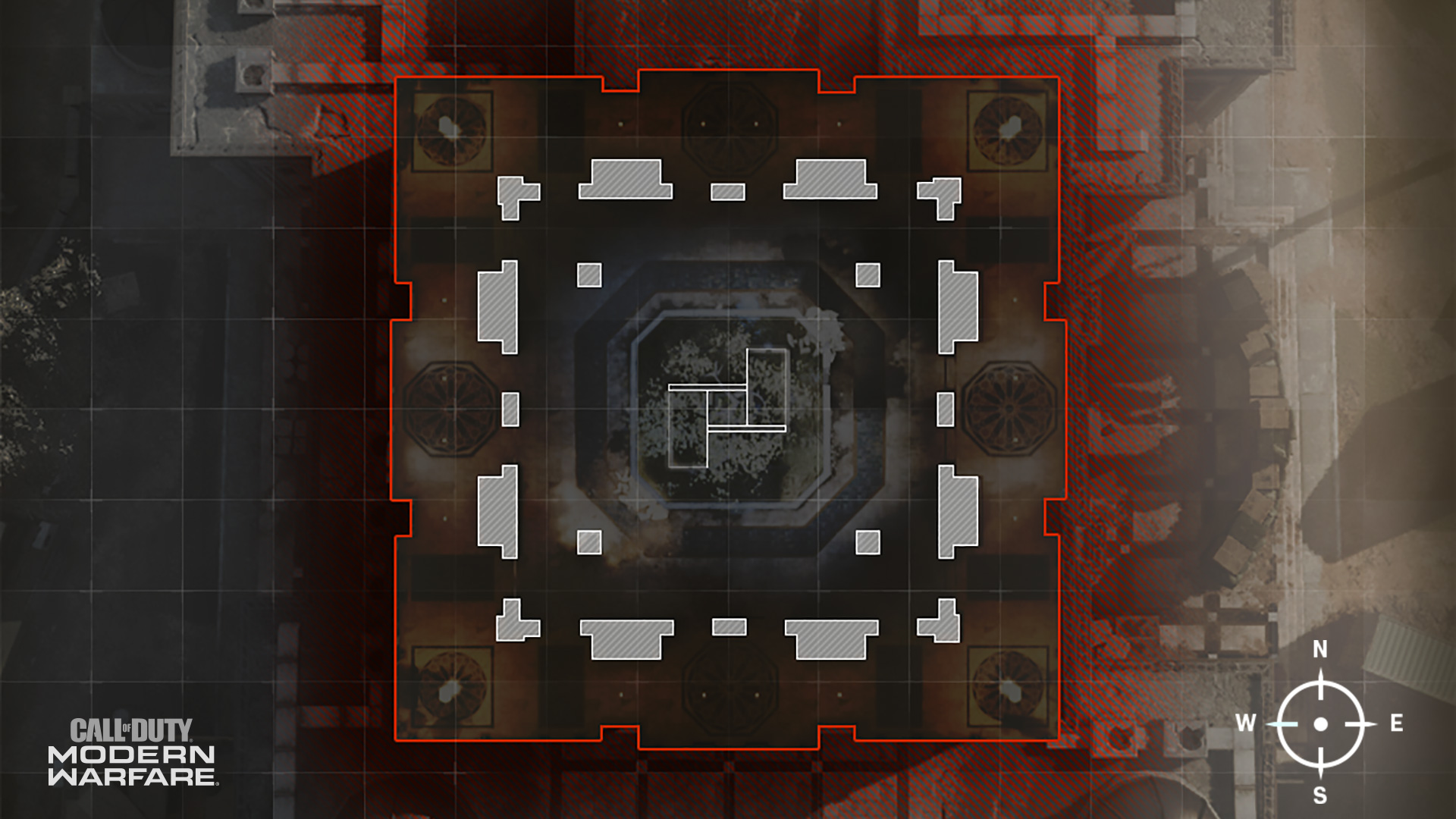 Yes, the Atrium is a beautiful place that probably hosted many a gathering during its heyday, but during the never-ending war for Urzikstan, this palace is a deadly site for Gunfights.

Like most Gunfight maps, Atrium’s structure is nearly symmetrical which, in terms of strategy, means that spawning in on one side of the map will most likely lead to the same tactics as the other.

The outer limits of this map are covered by the room’s second floor that looks down upon the Atrium’s center where a massive tree resides. The four pillars around the tree act as the only major cover pieces there outside of a nearby fountain, which breaks up the otherwise open space.

Should your Gunfight match here go into Overtime, the flag will spawn in middle of the eastern hallway.

Because Gunfight maps lack zones and objective game modes, we’re skipping those advice sections in favor of breaking down how to best use the various weapon types you may have in your random loadouts.

From pistols to sniper rifles, here is how you can play to the strengths of every weapon – and equipment, in general – within the Atrium:

·      Handguns – These secondary weapons are always a viable option when the primary runs dry, especially when sticking close to the limited cover around the Atrium. In loadouts with a short-range primary, the pistol can act as a mid-range engagement tool to potentially pick off foes across the fountain area or down a hallway.

·      Shotguns – Atrium is one of the smaller Gunfight maps, which means that shotguns have plenty of use for those looking to run-and-gun. Pushing up onto the fountain – or even hopping on top of it – could be a good strategy if you have a shotgun on you. Or, if one of the hallways isn’t seeing much use, using it as a flank route might get you behind enemy lines for a sneaky round win.

·      Submachine Guns – With a bit more range than the Shotguns, SMGs can hold their own down the hallways or across the main atrium. Still, you may want to use the fountain, pillars, or other stonework for cover as you use this weapon family’s mobility to its fullest extent on this tiny map.

·      Assault Rifles – The assault rifle category is a happy medium between using Atrium’s small size and its multitude of unobstructed sightlines to good use. In a pinch, aggressively pushing with an assault rifle through the center or around the hallways can be a great option. However, its mid-range capabilities make them exceptional choices for hitting enemies across the map, especially when mounting around the center area columns.

·      Light Machine Guns – This bulky family of weapons may not be well-suited for those wanting to run-and-gun, but rather those who are willing to mount up and pick off foes from a distance. While the columns and archways are some obvious mounting points, you may catch an enemy off-guard by using one of the octagonal tables to plop down this weapon for some mid-map suppressing fire.

·      Marksman Rifles – Whether it is an old WWII relic or semi-automatic battle rifle, this class of weapons offers a wide range of strategies for this tiny map. Mounting on the columns and archways for cross-map snipes is one option, although you could also get some more unique sightlines by simply backing up and peering around these stone barriers. Alternatively, taking a more aggressive push towards the middle could throw a less-trained marksman off-guard, allowing you to swiftly take them down with a well-placed chest shot.

·      Sniper Rifles – The high-powered scopes on these weapons will basically allow you to see the chips on the walls opposite to your spawn, making this family of weapons ideal for engagements at a distance. When aiming east-west across the fountain area, you could shoot through the design in its latticework, which may allow you to hit someone sprinting across the opposite hallway.

·      Launchers – Much like the sniper rifles, getting a launcher within a Gunfight loadout is an invitation to watch your sightlines. Because it is a secondary – and a slow reloading one, at that – launchers should be a last resort, at which point you should blast away down a hallway or around the fountain.

·      Equipment – Whether you are given a Frag, C4, or Flash Grenade, there is nothing wrong with chucking one across the map in the hopes of hitting someone on the other side. You may want to use C4, Claymores, and Smoke Grenades towards the center, as it could obstruct these sightlines or make life difficult for those trapped inside. In any case, just be careful to not throw any equipment too high up… Lest it wind up on the second floor and out of play.

·      Open Sesame. Despite the large tree and fountain in the center, Atrium has plenty of open sightlines that stretch across the small map. Mounting on columns and archways allow for more stable fire down these sightlines, while backing up and using some creativity can offer even more unique ways to hit that cross-map snipe.

·      Anarchy in the Atrium. The map’s small size leads to plenty of chaos no matter the loadout. Beware of enemies that may flank through the hallways, or who might push up and use the fountain for cover.

·      Making Full Use of the Fountain. Not only is the Atrium’s central and fountain great for cover, but the latticework can also be aimed through to potentially hit foes on the other side. Be mindful of where you take cover around here, as you might find yourself up against a see-through wall and become a sitting duck in the pond.

·      Patience is a Virtue. There may be little room to hide on Atrium, but that doesn’t mean you have to be the first to begin every fight. With so much open space on the map, it may be wise to wait and see movement across the map, then react and intercept the enemy (or enemies) that made their moves.

·      Overtime Hallway Hijinks. Because the eastern hallway contains the Overtime flag, it may be more advantageous to lock it down rather than the other hallway. Still, if you decide to give your enemies this side of the map, using the opposite hallway or your own spawn to pick them off from a distance could be a great way to turn the tide of an OT battle.