If you’ve spent any time in Call of Duty: WWII’s Multiplayer playing War, Team Deathmatch or just hanging out in HQ challenging strangers in the 1v1 pit, you’ve probably noticed Armory Credits. The two crossed hammers on a silver, octagon-shaped medallion in the top-right corner of your screen? Yeah, that’s them. You get these from a variety of places for several reasons: as your Daily Login bonus, in Supply Drops, completing an Order and more.

So, you get all these Armory Credits for, essentially, playing Multiplayer. Great! You were gonna’ do that anyway. But, what can you do with these Armory Credits? Sure, you can play some classic arcade games in the R&R tent but, for most people, Armory Credits mean one thing: unlocking gear. Read on and we’ll take you through the process of getting the gear you want The Armory Credit Way. 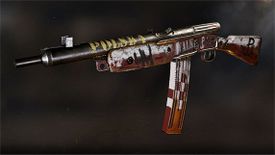 First, if you’re not acquainted with the Quartermaster, go do that. This is the place for Contracts, Supply Drops and, most importantly, Collections. A Collection is a group of gear you can accumulate through Supply Drops or with Armory Credits to unlock a Collection Reward. And one of the finest Collection Rewards out there is the Volkssturmgewehr – Resistor. If you haven’t had the chance to run with the newest Rifle in the game, you’ve certainly been killed by somebody using it. It’s got versatility, range, fire rate - it’s a fantastic gun. And, best of all, you can unlock it just by playing the game. Here’s how…

Contracts are an in-game way of rewarding yourself. Complete them and you’ll usually be rewarded with Supply Drops or a healthy XP bonus. For our purposes, focus on the Supply Drop rewards. To maximize your chance at getting your goal – that sweet, sweet Resistor – pick out some Contracts every time you play. If you can stack two or three at once, even better.

You’ll be flooded with Supply Drops once you start completing Contracts. One of three things will likely happen from opening them.

1. You get items that are a part of the Resistor’s Collection, which is great.

2. You could get other gear you don’t have, which is still pretty good because, hey you’ll take that PPSh-41 – Iron Curtain any day.

3. You get items you already own, which for the purpose of getting that Resistor, is also good.

How are duplicates of gear you already own good? Because, in lieu of a new piece of gear, they’ll translate into Armory Credits. Depending on the rarity of the item, you could get hundreds or even over a thousand Armory Credits for a ‘dupe’. If the Resistor is your goal, this is a huge win.

Unlike Contracts, Orders can be completed at your leisure. Some of us at the office still have Winter Siege Orders taunting us every time we login. To get that Resistor, focus on Orders that reward you with Supply Drops or Armory Credits. Often, you only have to win a game in a specific mode to get 300 Armory Credits. Regardless of your skill level, that shouldn’t take long. Supply Drops, as previously mentioned, serve the same purpose: more gear and more Armory Credits.

Knock out as many of these are you can. Daily Orders change every day. Weekly Orders change… yeah, every week. Once you start attaching Contracts and Orders to your playtime, you’ll rack up a bunch of Armory Credits. And, seeing how easily you can come into this currency, it’s a no-brainer to use them on Contracts and, eventually, Collection Items.

Quartermaster: You Got The Credits. Now Get The Gun.
Over the course of opening all those Supply Drops, fulfilling Contracts and completing Orders, you’ll accumulate a nice sack of Armory Credits and gear. The Resistor has eight Collection Items needed in order to get the Collection Reward. You’ll probably have a few of them simply from the volume of Supply Drops you’ve opened. If you’re still missing some? It’s Armory Credits to the rescue. Unlock each remaining item and you’ll be wondering how you could’ve ever been so Resistor-less.

So, that’s the Armory Credit Way. You get ‘em just for playing the game we all love and they reward you with the gear you want. Simple enough, right? So, head to the Quartermaster, set your sights on a Weapon Variant or Uniform. And who knows – you could be just 125 Armory Credits away from unlocking yourself a brand new ballistic. So follow this rough roadmap to stacking Armory Credits to the ceiling and you’ll get that gear quicker than you can scream ‘A BOMB HAS BEEN PLANTED ON OUR AMMO SUPPLY.’