Getting Started in Modern Warfare®: The Basics

The first of our Getting Started guides covers how to boot up Call of Duty®: Modern Warfare® and choose a game mode.

Whether you are prepared to pre-download the game or are ready to start the game once you pop in a disc, you may be wondering, “Hang on… What do I do once the game is in my hands?”

This series of guides will take you through the basics of getting started in Call of Duty: Modern Warfare, and is recommended reading prior to booting up the game. Our goal with these is to let you know what to expect when starting Modern Warfare for the first time, so that your focus is on having fun with all the content that this game has to offer.

With that said, within this guide are links to other articles that go more in-depth into game mechanics, settings, and more. Clicking these will take you to another tab with more information to further answer any questions you may have, but, of course, if you have any more questions after reading these guides, feel free to visit and talk to Activision Support.

So, as our old pal Gaz would say, let’s do this: 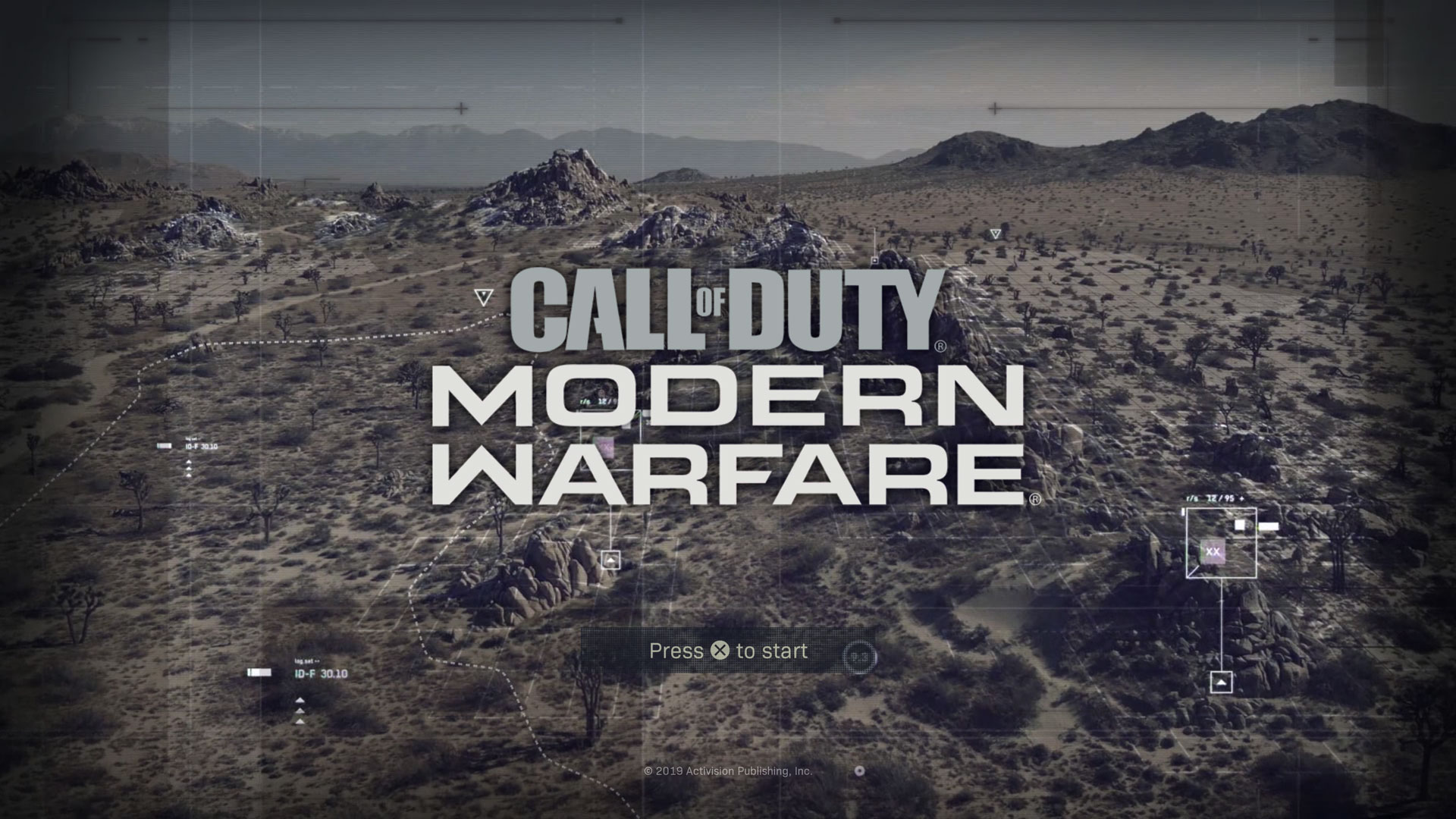 Three Steps to Starting Up

After launching the game and watching the boot-up sequence, you’ll be greeted by the title screen. Carry out the on-screen command, read through the Terms of Agreement, accept it, and you’ll then go through three simple steps to start up Modern Warfare:

Step 1: Adjust the game’s brightness, which should be done accordingly to fit your screen and gaming environment. Don’t worry; this can be adjusted again in-game.

Step 2: Go through the Quick Setup menu, a boiled down version of the main settings. Here’s a quick breakdown of what’s on here:

·      Controls: Next up, for those playing on consoles, you’ll have the option to change controls. Franchise veterans may have a specific setting they love, but for those that are new you can stick with the default and experiment with different presets later to see what works for you. Also, below controls is where you can invert vertical look, which inverts camera movements on the Y-axis when enabled.

·      Sensitivity: This submenu has options for horizontal and vertical stick sensitivity, which is set to 3 – medium – by default. These define how fast your aim moves on both the horizontal and vertical axis in-game, with 1 being the slowest aiming speed and 20 being insanely fast. Newcomers might want to keep this at 3, then adjust according to their comfort level after playing and experimenting in Multiplayer.

·      Graphics and Audio: Rounding out the Quick Setup menu are the graphics and audio options. The graphics option contains the safe area matrix, which allows you to adjust the in-game heads-up display (HUD) safe area to fit the screen. As for audio, this is where you can turn on subtitles, change the audio mix, and adjust individual levels for music, effects, dialogue, and master volume. If you’re unsure of what audio mix to choose, Infinity Ward provided a breakdown of what these audio mix options are here.

After completing these three simple steps, you’ll go to the main menu.

But Wait! Where Can I Adjust All My Settings?

While you may want to experience a game mode before adjusting any more settings, you can still access the Options menu on the main menu itself.

Press the corresponding command to access the Options menu, and you’ll be taken to that menu. Depending on your platform, we have three separate guides to options and controls within Modern Warfare…

From here, our Getting Started Guides will continue with an overview of the three game modes available in Modern Warfare. While it’s recommended to try out all the game has to offer, we know that you have to start somewhere.

With that said, here’s a quick description of each game mode: 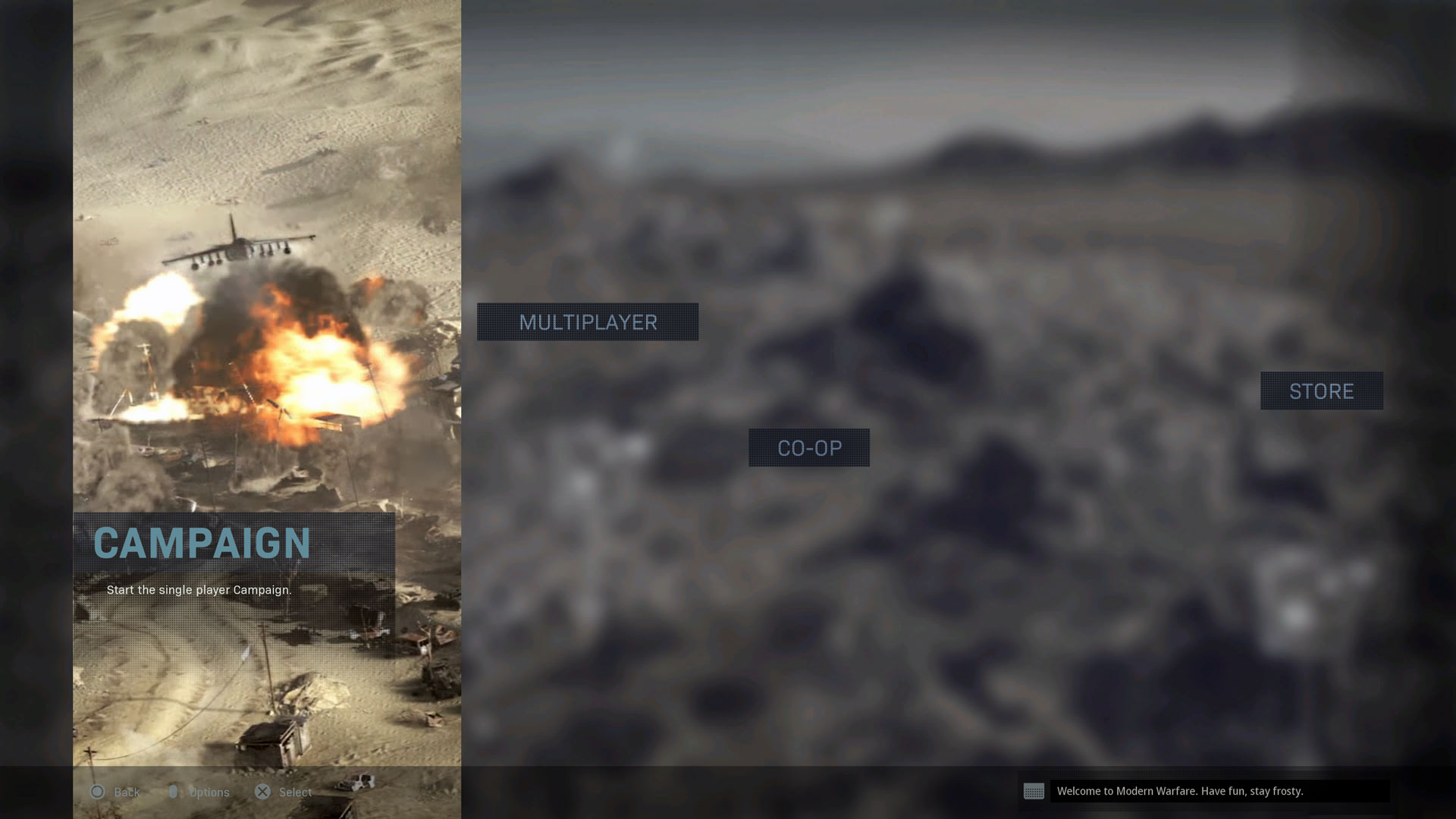 Campaign: The single-player experience within Modern Warfare engulfs you in a raw and gritty narrative, bringing unrivalled intensity and shining a light on the changing nature of modern war. You will play as three characters – Sgt. Kyle Garrick, CIA Agent Alex, and Farah Karim, leader of the Urzikstani Liberation Force – in a covert battle for the global balance of power. Missions within the Campaign include a variety of differing playstyles, such as close quarter, stealth, and long-range combat scenarios. There are also multiple difficulty options, which fit a wide scope of players from those new to the franchise (Recruit) to seasoned experts (Veteran). 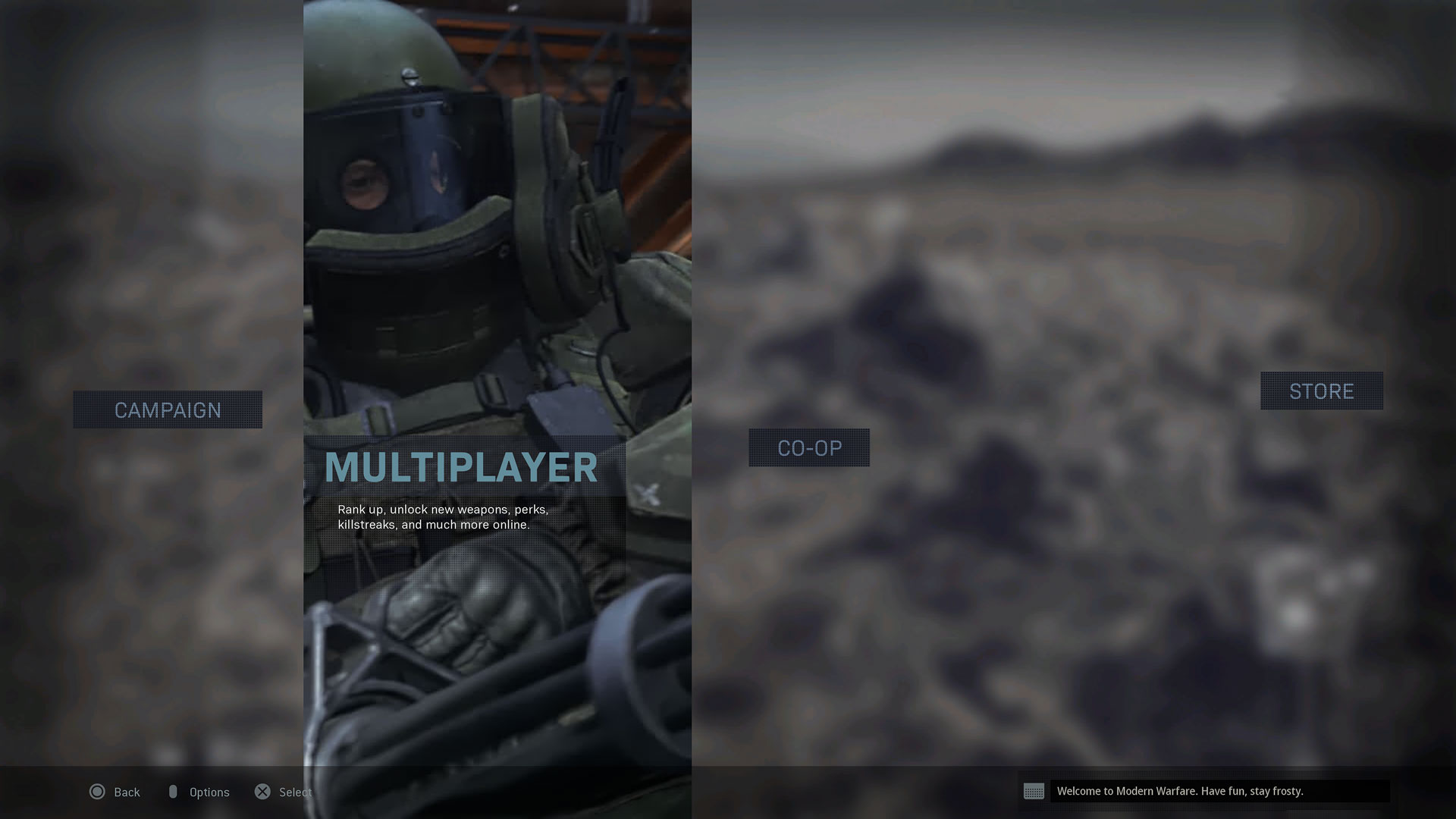 Multiplayer: Multiplayer in Modern Warfare offers a variety of fun and competitive modes with plenty of customization options. Go up against fellow Tier One Operators – or in other words, members of the Call of Duty: Modern Warfare community – in live fire combat exercises, ranging from Free-for-All games to tactical objective modes, on a variety of maps based on locales within the Modern Warfare universe. Your Operator will enter Multiplayer maps complete with an ultra-customizable loadout, tide-turning Field Upgrades, and Killstreaks, powerful rewards for taking down multiple enemies within one life. Rank up your soldier to unlock the full suite of loadout options before continuing progression into Officer Ranks while earning experience for your weapons along the way to unlock attachments and weapon perks to further customization. 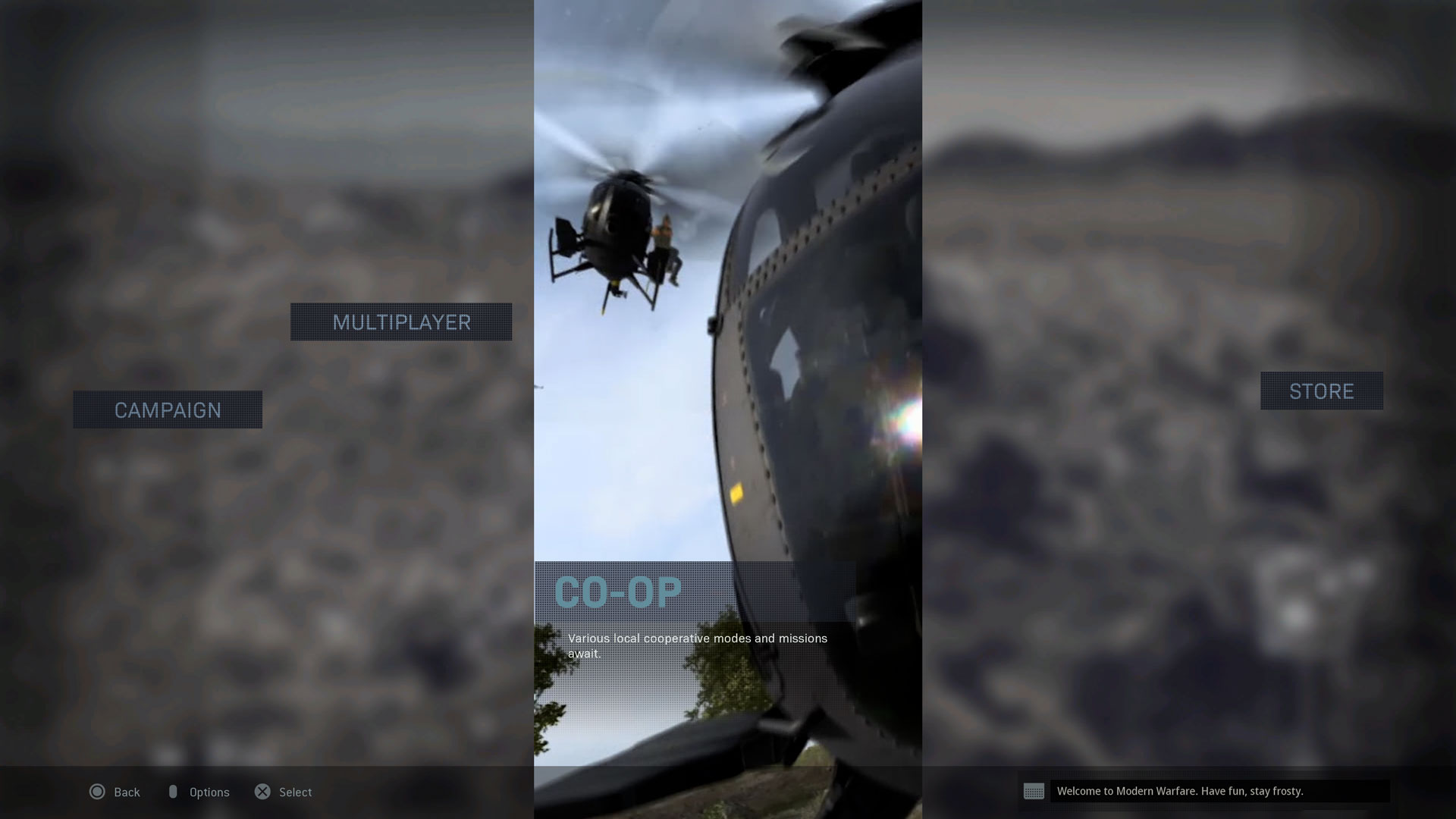 Special Ops: This is a co-operative, PvE experience within Modern Warfare, where you and up to three other teammates will continue the events of the Campaign through intricate and dynamic missions. Join the global alliance Armstice, a joint force of Allegiance and Coalition Operators led by Kate Laswell (CIA) and Sergeant Kamarov (FSB), to stop and sever a global terror organization’s access to weapons, funds, intelligence, and hardware.

A Note on 2XP Tokens

2XP tokens are limed consumables that double your XP in Multiplayer for a predetermined time. Earn 2XP tokens by completing challenges in-game. Or, get 2XP tokens by redeeming Activision codes from participating retailers on the Call of Duty website.

To use a 2XP token, equip it from the Multiplayer menu. An on-screen timer starts, ticking down in real time.

The clock never stops, even if you log out. So, only activate a token if you plan to use the full time.

Check out all our Getting Started Guides on these three game modes, so you’ll be ready to jump in when Modern Warfare launches on October 25th.