The Rank Up Report #2: Going Gold and Preparing for New Content in Modern Warfare

Our lead writer shares his journey to getting the Gold Camo on the Model 680 in-depth, so you can join him on his quest for Damascus.

In the last Rank Up Report, I completed the Campaign on Realism, tackled Gunfight with my editorial teammate, and ranked up a couple dozen times within the Enlisted Ranks.

While on the road to Officer Ranks, I tackled the game using a wide variety of loadouts to complete as many challenges as I could. However, I also wanted to go for gold – Gold camos, that is.

As we mentioned before on the blog, weapons can level up by earning XP. Each level up can unlock a weapon attachment, perk, and/or a camouflage that can be equipped through Gunsmith.

Within each camo set are nine more camo patterns to unlock through camo challenges - unique objectives for every weapon class that test your abilities with that weapon in Multiplayer. These challenges have multiple tiers to them, giving you a new pattern upon completion of each step until you’ve fully completed the objective.

Completing all these camo challenges unlocks the Gold camo for that weapon… Which, as you can see, I’ve earned on the Model 680. 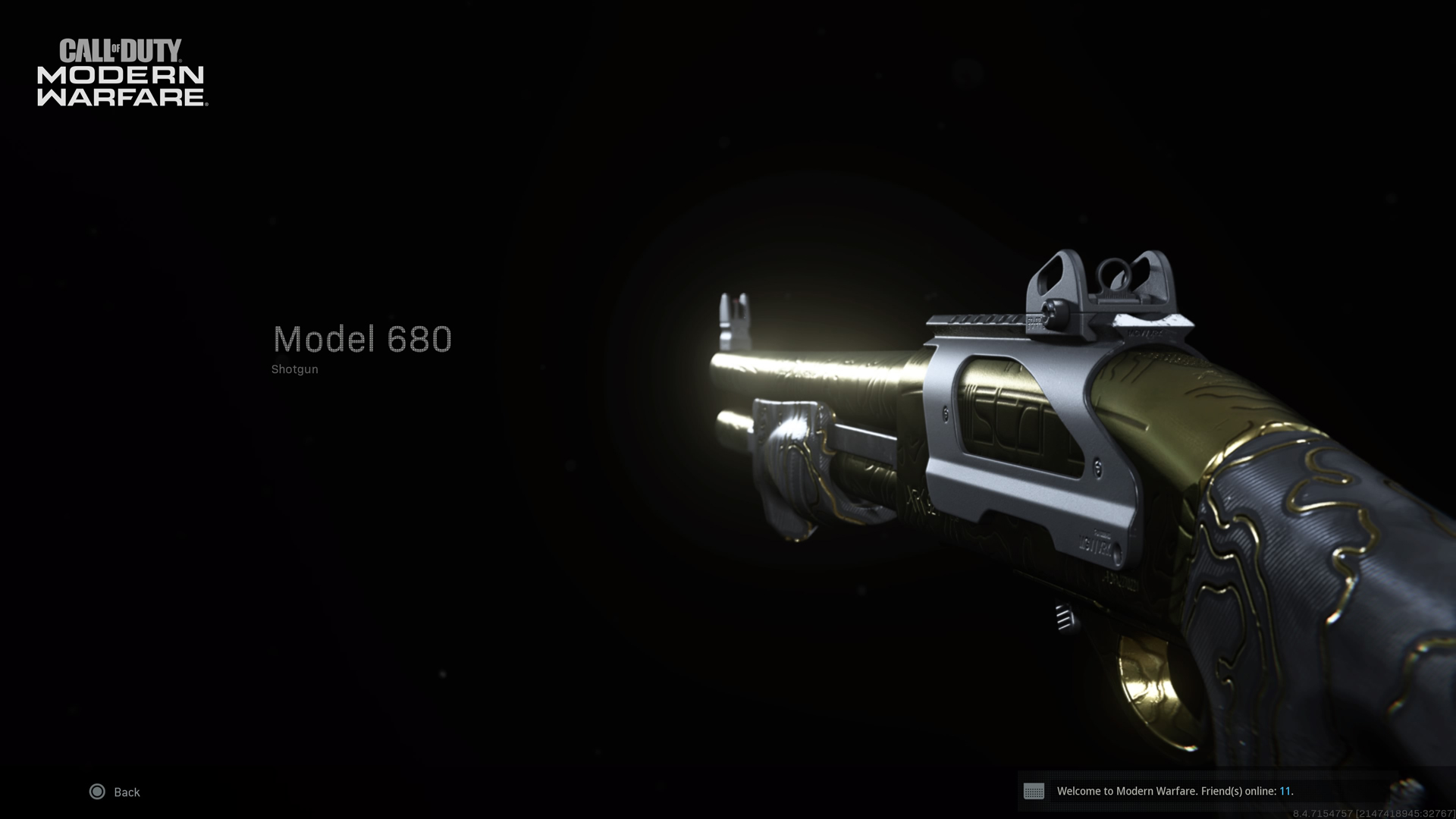 Usually in any Call of Duty® game I play, I use every weapon and work to unlock its Gold camo. I love exploring all of what the game has to offer and by unlocking Gold I get to know each weapon. This way, no matter what anyone online throws at me, I know of a few different ways to counter it.

Plus, doing this unlocks some even cooler camos for my weapons, and Modern Warfare® has its own special rewards in that regard. For those that unlock Gold camo for every weapon in a specific weapon class, you unlock the subtle, yet stylish, Platinum camo for those weapons.

Those who earn Gold for every base weapon in the game get the Damascus camo to equip on all those weapons. Damascus weapons were said to be held by legendary warriors during medieval wars, and are defined by their watery or “damask” patterns.

In other words, it looks absolutely epic.

When chasing those incredible completionist camos, I usually start with weapons that excel at extreme close ranges (i.e. the Model 680, a shotgun) and work my way up to sniper rifles. I naturally go through secondary weapon progression while doing this, but return to knock out that category specifically after I finish the primaries.

Each weapon class has 10 different challenges for the 10 different camo sets, but most of them are similar. With that said, here are my tips for knocking out the Model 680’s camo challenges, which can also apply to the other shotguns in this class and even other weapon classes.

Also, for each tip, I’ll show off the final camo pattern that can be earned by completing the full objective set. 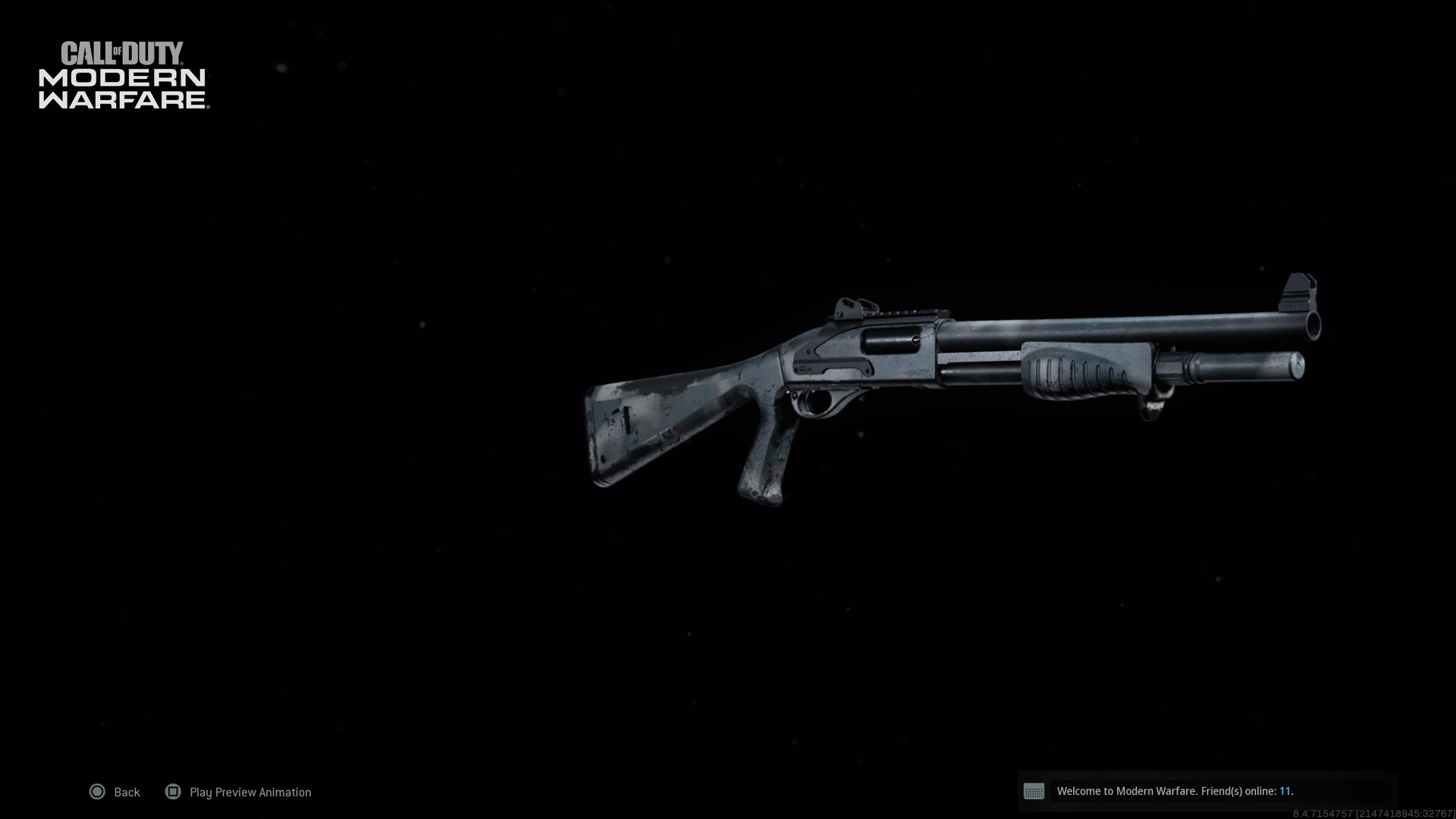 This objective is simple: just earn kills with the weapon, and you’ll earn a new Spray Paint camo pattern at regular intervals.

For the Model 680, I had to earn 250 kills to unlock the full set of patterns, which ends with the Smoke pattern shown above.

Completing this challenge came naturally; it was done and dusted while I was working on other camo challenges. Speaking of those…

Woodland – Get Kills While Crouched

After unlocking the base Woodland camo, earning 75 kills while crouched will unlock the full set, which ends with the Canopy pattern.

At first, remembering to crouch to earn progress towards this objective took some thinking. But then, I remembered something from my movement guide: after sliding, my Operator ended up in a crouching stance.

Because shotguns are the most agile weapon type in the game, sliding around the map was a natural thing I did after taking a short Tactical Sprint or a regular sprint. For other weapons, crouching while shooting may be more innate, since crouching reduces idle sway that hinders mid to long range combat.

However, for this challenge on my Model 680, I slid my way to victory, earning those 75 crouching kills while probably giving my Operators some serious rug burns. 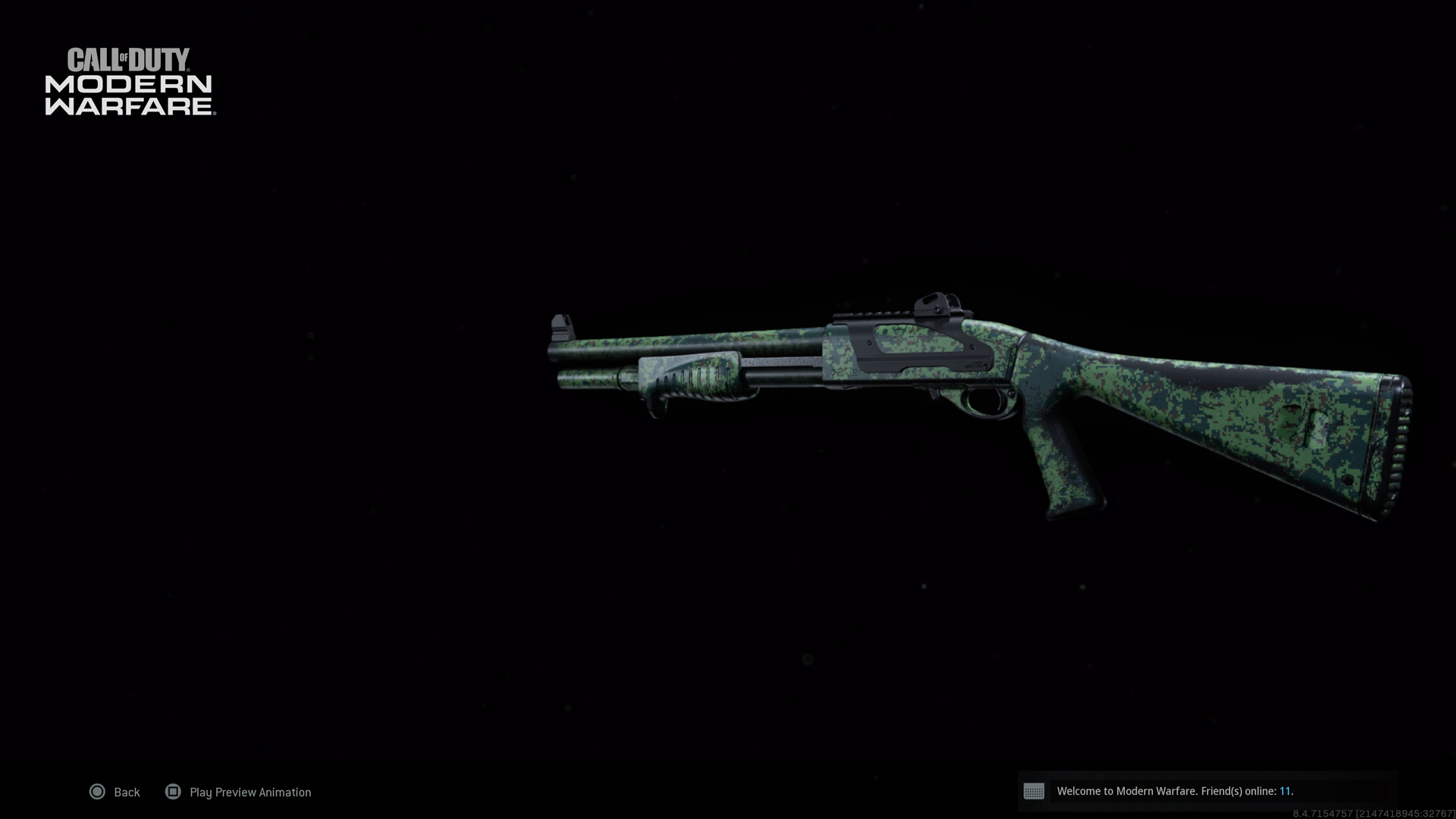 It only takes 75 hipfire kills to unlock the full Digital camo set on the Model 680, which ends with some gritty Green Digital camo.

On weapons that need more accuracy while hipfiring – i.e. a submachine gun – the 5mW laser helps tighten that spread, which could help in completing this challenge.

To earn the full Dragon set – including the Foliage pattern – I had to earn 50 pointblank kills. That meant I had to be within a few feet of an enemy player when taking them down which was common while using a shotgun.

My tip for this is to use the weapon’s mobility to your advantage; flanking and rushing the enemy may lead you getting right up next to them, which will allow that point blank shot. 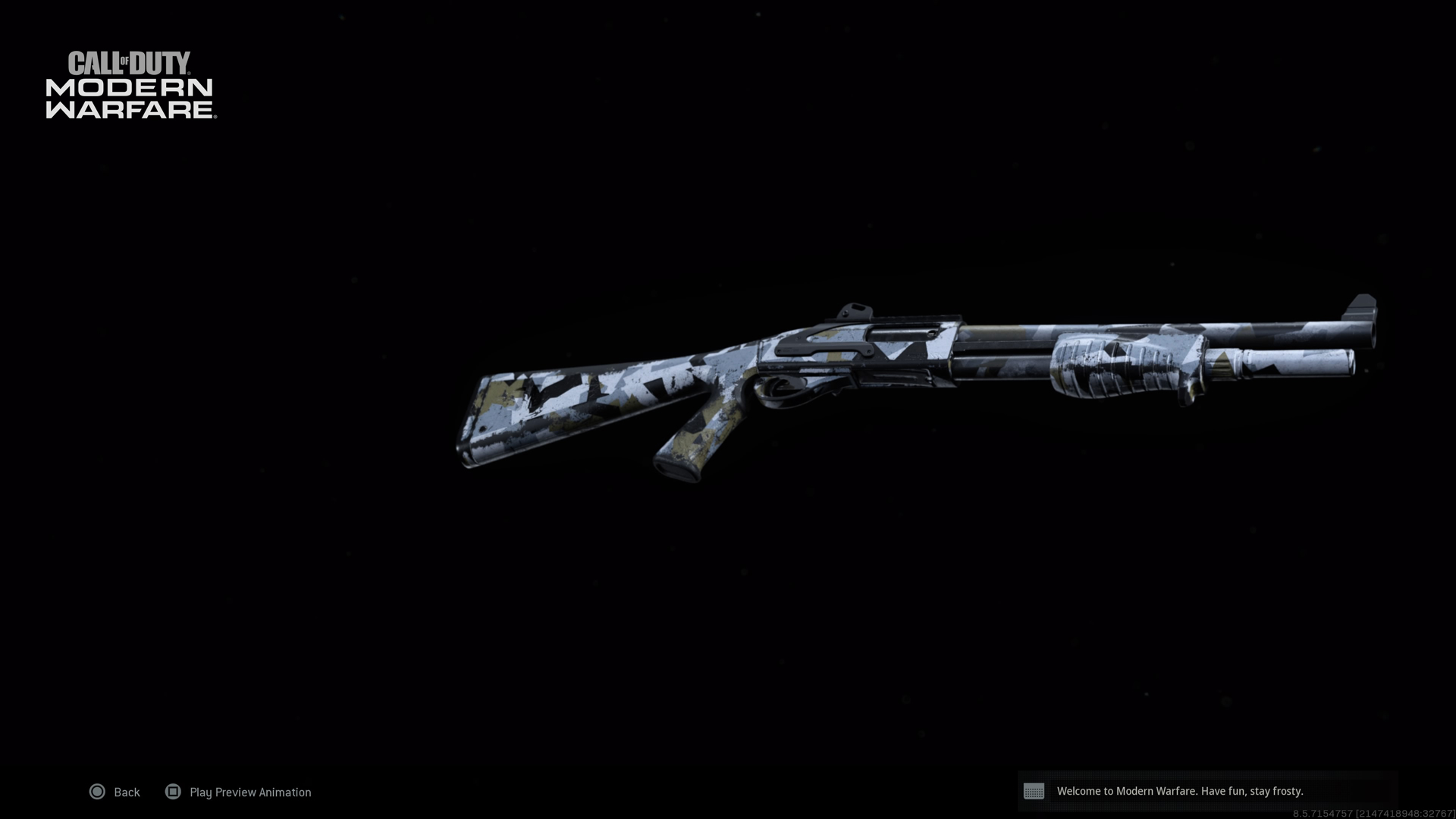 Headshots with the Model 680 – 50 to be precise – was what I needed to earn the full Splinter set ending with the Sharp Edges camo.

I combined this challenge with point blank kills – aiming for the head is a bit easier when the enemy is right in front of you – to make it a little easier. However, this one just boiled down to patience; headshots are a risk-reward move, as aiming above center mass can lead to a near-miss or an easier takedown.

One thing I may have done differently is to try out the Slug Rounds attachment sooner to complete this challenge. Slug Rounds changes out the Model 680’s 12-gauge pellets for hardcast slugs, which can be more accurately placed for headshots.

Topo – Get Kills while your gun is using all attachments

With this camo pattern, my Model 680 turned into a topographic map. The end of this pattern spectrum is the Sandstorm, earned by earning 180 kills with a fully kitted Model 680.

Like the Spray Paint challenge, this came naturally through progression. I just made sure to equip a full set of five attachments whenever I was in a public match. 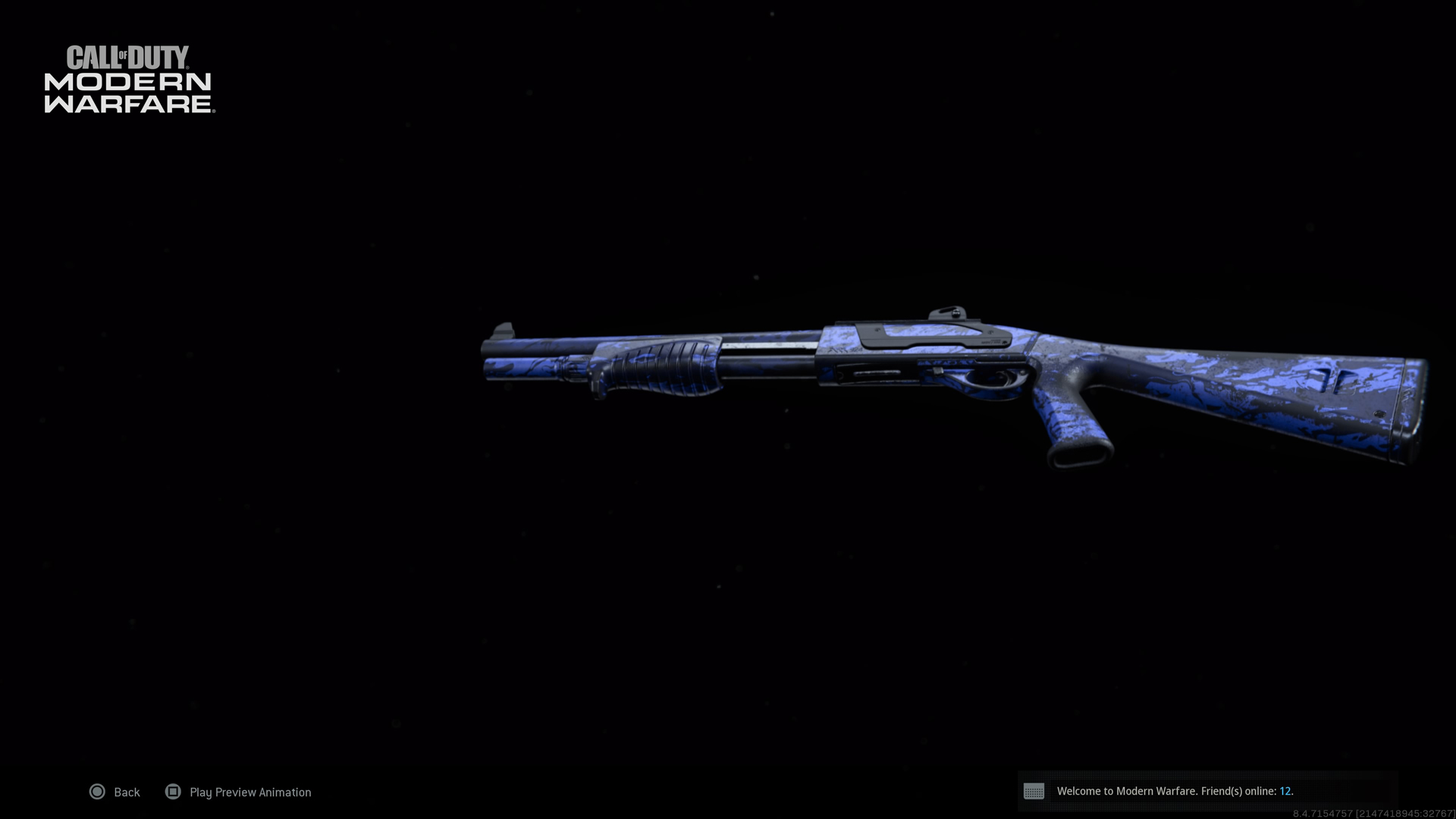 This pattern brought back memories of Modern Warfare® 2; specifically, the last two patterns – Red Tiger and the set-ending Blue Tiger – was what I remembered as camo rewards back then.

Here, I had to earn 25 double kills with the Model 680 to earn the full set of Tiger camos.

Playing in larger lobbies, such as 10v10 and Ground War playlists, increases the chances of running into multiple enemies. Another game mode type that provides more opportunities to run into clusters of foes are objective game modes, as I found a few duos, and even some groups, capturing or defending objectives.

The time to earn double kills is also a bit forgiving; earning two kills within a few seconds still counted as a double kill, which made this challenge easier than I expected.

Stripes – Get Kills Shortly After Reloading

Welcome to my spirit animal camo: the Pink Zebra!

Earning 30 kills shortly after reloading gives you the full set of camos for the Model 680.

While this challenge could come naturally – everyone must reload at some point – a trick I did was to fire off a round upon spawning in, run to an enemy, quickly reload, then take the shot before they noticed me.

Reptile – Get Kills with no attachments

After earning so many cool attachments for my Model 680, I had to take them all off and earn 110 kills with the base weapon to unlock the full Reptile camo set.

My tip for earning all these patterns, including the Gartnersnake, is to be patient and remember where your journey started. What are the raw strengths of the weapon you are using?

For the Model 680, it can be strong in very close engagements, but is well-rounded enough to hold its own at a dozen feet or two. So, I used it like I did when it was just at Level 1 and, while doing so, tried knocking out this objective set in tandem with most of the other camo challenges (outside of the Topo set, of course).

Skulls – Get 3 Kills Without Dying

This camo set, especially the ending pattern of Lichyard, is absolutely hardcore. And its challenge is just as hardcore; you must earn three kills without dying.

Besides being patient after errant deaths and not rushing into battles at critical health, I liked using Killstreaks that gave me intel on where enemies were, specifically the Personal Radar and UAV.

Using these two Killstreaks in conjunction with Hardline allowed me to earn them at 2 and 3 kills respectively, giving me some reconnaissance on enemy positions to get that last kill per triplet… Or an advantage when it was time to go on the next 3-kill streak.

By the end of my Model 680 journey – a complete 560 kills – I wound up liking two sets of attachments. Here’s what I found myself using often during my camo challenges, save for the Reptile set: 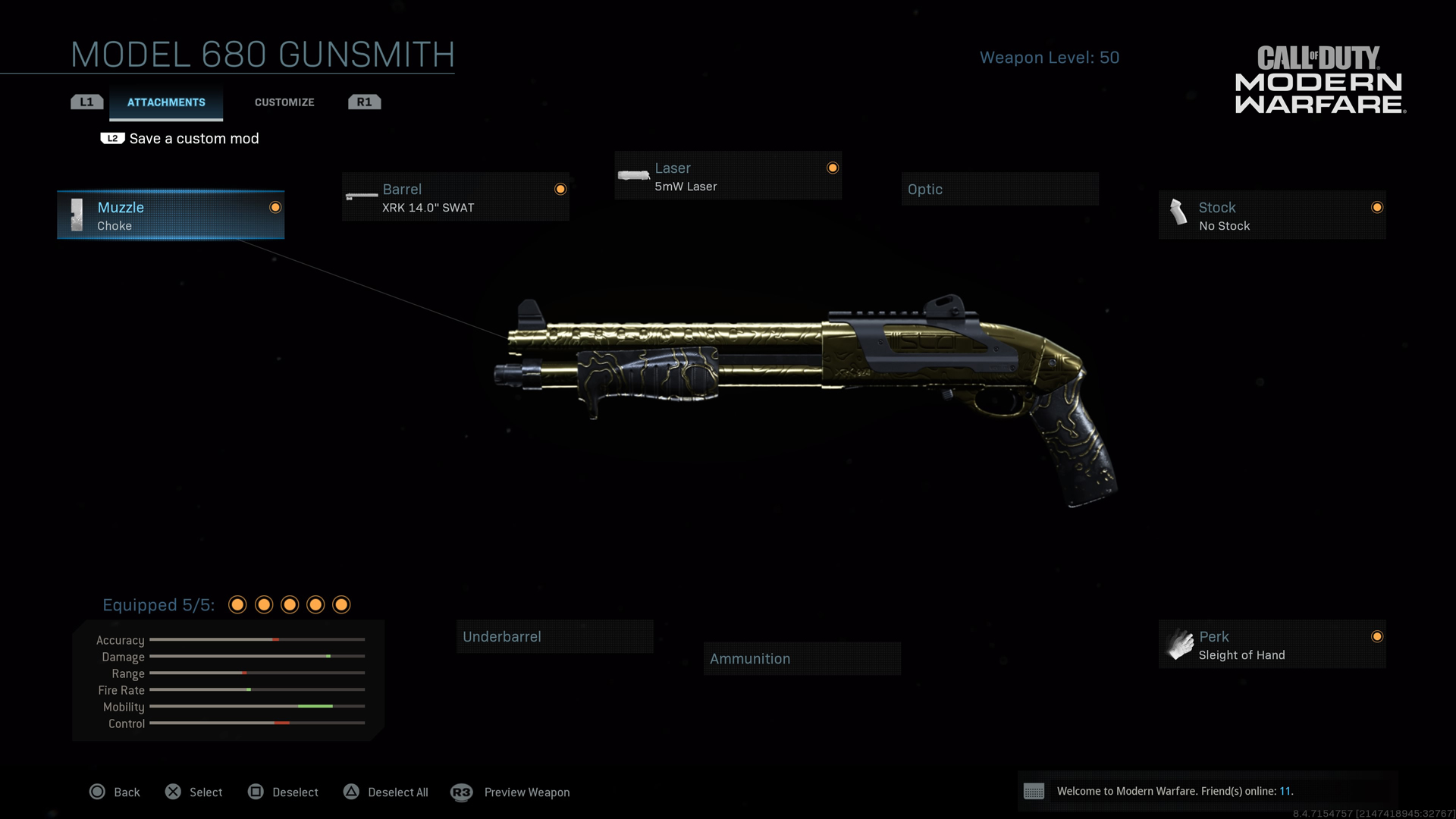 For this version of the Model 680, my mobility – how fast I moved – was fairly high, allowing me to get across the map rather quickly, especially with the Double Time perk. I found it did well in clearing out small rooms, but in mid to long range fights, it was not as effective. That I could chalk up to the 14.0” barrel, but I countered it with the Choke to retighten my spread. And, since that barrel limited my ammo, I took up Slight of Hand to ensure I could reload my smaller clip quicker.

But if I did want to use my weapon for mid to long range engagements? These are the attachments I equipped: 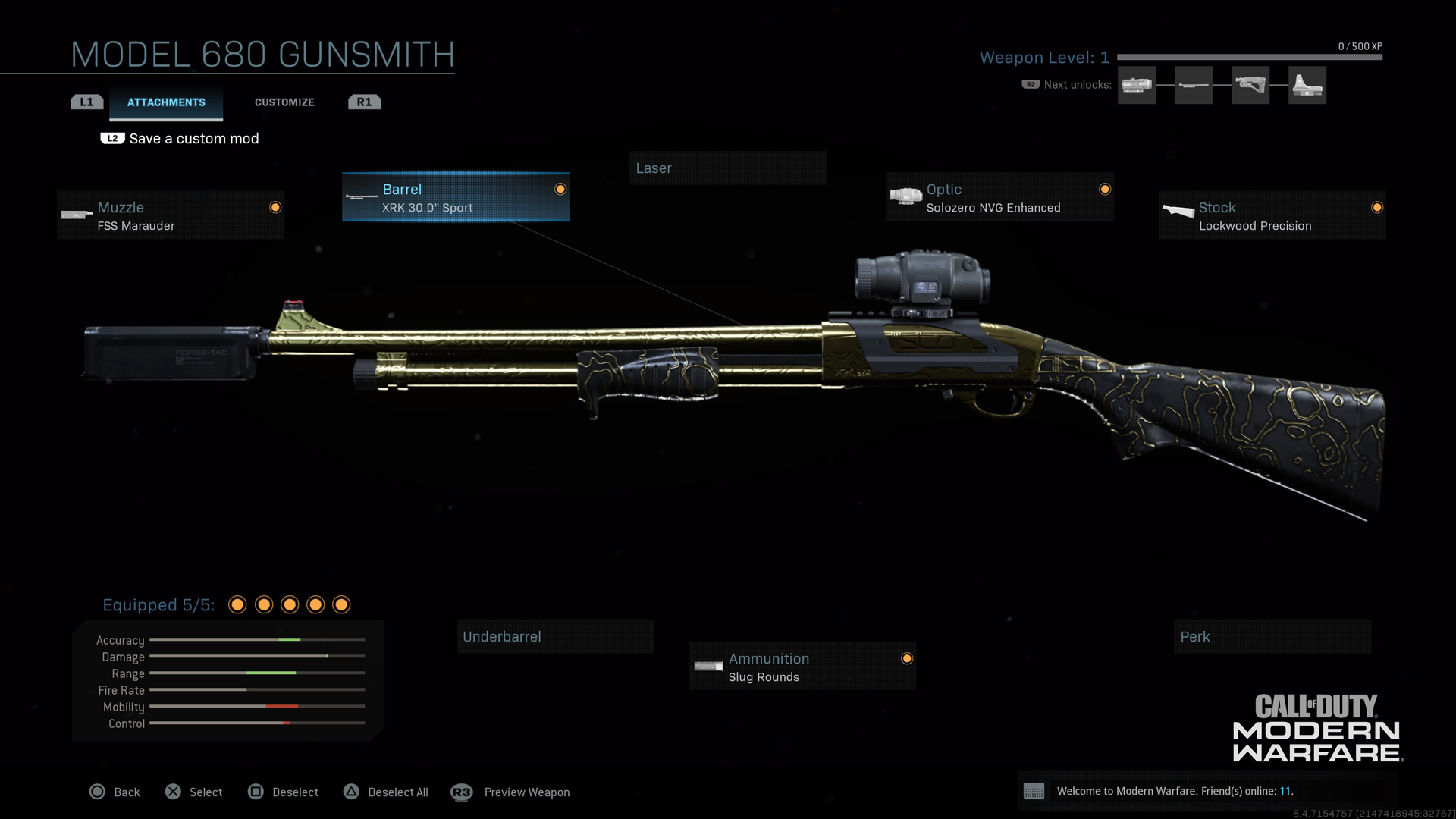 This version really hurt my mobility, making my aim down sight speed and movement speed slower. However, I traded that off for as much range as this weapon could muster, completing it with a Stock that increased aiming stability and a Thermal sight to give me a clear picture down range.

Again, you may find that other attachments will suit you better; that’s okay. There is no “perfect” weapon nor attachment set-up in Modern Warfare, as they all have strengths and weaknesses in combat.

That’s all I did for this past week… Except for this: 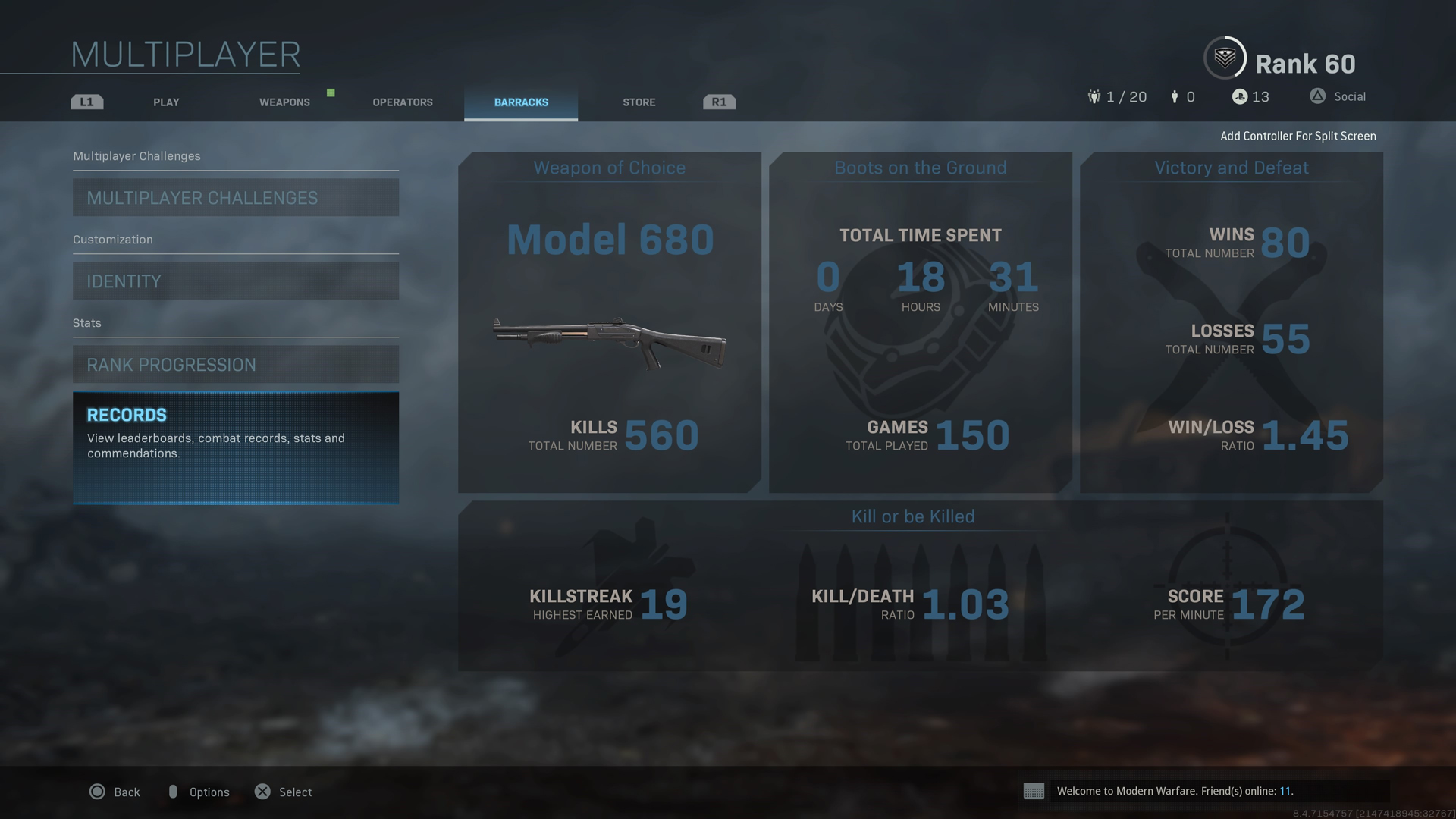 Yep, I hit the Officer Ranks.

At exactly 150 games played (18 hours, 31 minutes of playtime), I’m actually Rank 60, which is out of the Enlisted Ranks and five ranks into the Officer track.

What was waiting for me in these new ranks? And how excited am I for the new Multiplayer maps and modes recently released?

Well, dear reader, you’ll find out the answers to those questions, and more, in the next Rank Up Report.