Twitch Drops have now ended. Thanks to everyone who participated.

Season Two of Modern Warfare is live now. Experience new maps for Multiplayer, Gunfight, and Ground War including the return of the classic map, Rust. Players can now join the fight as *Ghost, and progress through new Officer Ranks with new Missions and Challenges in Season Two!

With Season Two available to watch on Twitch, we’ve got some in-game rewards you can earn for tuning in. Watch Modern Warfare from February 12 at 10AM PT to February 19 at 10AM PT on Twitch to earn rewards, then equip them in-game and jump into all the action of Season Two. Here’s the steps to watching and earning Modern Warfare rewards on Twitch:

Registering for a Call of Duty account is a relatively easy process that gives you some awesome benefits. Accounts make it possible for cross-play to be enabled in Modern Warfare, and you’ll receive all the latest intel and personalized stats.

Once you have a Call of Duty account, connect it to your Twitch Account, so you can start earning!

Go here to link your Call of Duty and Twitch accounts.

If you already have a Twitch account linked, you may need to re-link. Re-linking ensures you have enabled the correct permissions, so you can earn rewards.

Go here to re-link your Call of Duty and Twitch accounts.

Then, you’ll need to head to Twitch and get a look at the streamers who are playing Modern Warfare. On drop eligible streams you’ll see a callout that “drops are enabled”, so you know you are officially watching and earning. From there, click the stream and enjoy the gameplay.

You can watch multiple streamers or one stream but as long as they are “drop eligible” your total watch time will be tallied up, so you can earn rewards.

Are you a Twitch streamer? If you’d like your stream to be eligible to earn rewards follow steps one and two, then make sure you are streaming on the official Modern WarfareTwitch directory. 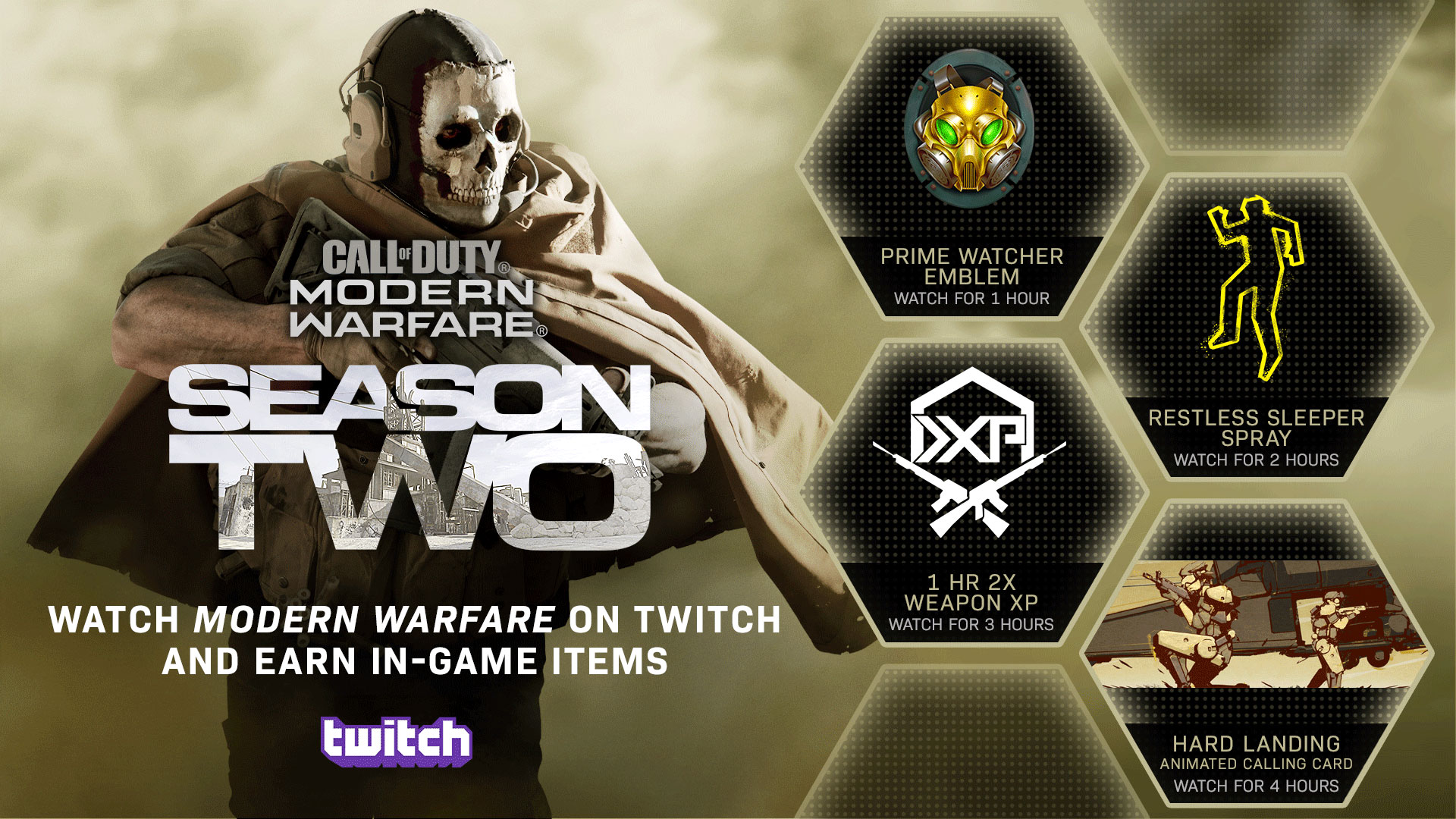 Step 4: Get the Goods

So, you’ve watched some awesome gameplay of Season Two of Modern Warfare and want to know what’s headed to your inventory? Details below:

Enjoy the streams and the goods you’ll earn from watching Modern Warfare. After that jump-in and experience all the new content of Modern Warfare of Season Two.

Have more questions on Twitch drops or linking your account? Read our support article here or message @ATVIassist on Twitter.

*The Ghost Operator is available through the Season Two Battle Pass system.