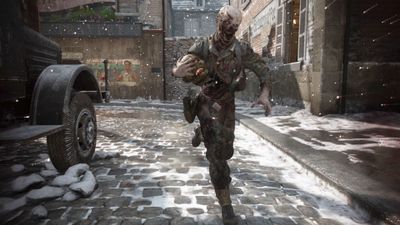 Sacred bones of nose and face
Strewn throughout a sacred place
The skull, a relic, possesses power
Whose strength doth gain with passing hour

So, these couplets don’t mean anything – they’re complete gibberish. Pure, made-up nonsense. We made ‘em up because holding a skull, like the kids a year above you who were way too into candles, seems like it should have a spell or something to go with it. This is our way of saying the new game mode – Relic of the Undead – brings competitive relic-protecting to Call of Duty®: WWII Multiplayer. It's this week's Weekend Warfare, that'll grant 3x2XP all weekend long and we figured a little primer was in order. You and your team win points by capturing souls. You grab the zombie relic (a skull), you turn into a zombie and your team has to defend you. It’s like a game of Keep Away mixed with a little bit of Gridiron and we’re here to give you everything you need to know to capture some ***** souls.

Protect the relic, capture a soul

As is the case in Gridiron, there is a specific location on each map where the zombie relic will spawn at the beginning of each match. Once you, or somebody on your team, takes control of the relic you must protect it and retain possession for 30 seconds to capture a soul. Once you reach the 30-second mark and a soul is captured, the relic will reset to a random spawn point and whoever last possessed it will get 500XP towards their Scorestreaks. The first team to capture five souls wins. You can also win simply by having the highest score when time runs out. The trick is keeping possession of the skull for those 30 seconds without use of your weapons. How you and your teammates accomplish this is up to you. Fortunately, you’re not lacking for options.

No weapons, no problem

Whoever possesses the relic loses the use of their weapons and can only melee. However, the skull does dish out one-hit melee kills and whoever is holding it will move a bit faster than everybody else. This means, while not optimal, you’re far from defenseless while possessing the coveted relic. You can post up in a dark place – like the ill-lit corners of Groesten Haus, the subterranean areas of London Docks or the covered, rocky paths of Gibraltar – or, you can use your newfound zombie-agility to escape from enemies. 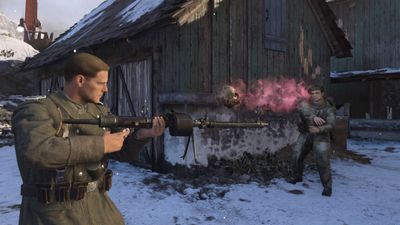 In another Gridiron parallel, you can drop the relic for a quick gun fight or pass the relic to your teammates. That 30-second possession timer never resets. So, if you get spotted and see a teammate out of enemy sight, smash that toss button and keep the countdown alive. Remember, any member of your team can possess the skull to keep the countdown going. Even if they don’t catch it right away, they can run and grab it to continue the possession.

The fast-paced nature and fun zombie twist has quickly made Relic of the Undead one of our favorite modes to play around the office. The 30 second timer keeps the tension up and we’ve done – if we’re being honest – an unhealthy amount of yelling when one of our teammates loses the relic. It’s all team-building, right? That’s what we tell our bosses. Relic of the Undead is only available until the end of the Attack of the Undead Event which goes through June 26that 10 AM PT. So, get in there and capture some souls. Being a zombie never felt soul good.