Winter Siege rolls on throughout the rest of the month, so complete those Contracts and stock up on winter gear from Captain Butcher while you can.

Another week means another edition of the Quartermaster Comms. The latest scoop on all the hot gear to get you through the frigid cold of Winter Siege. This week, we’ve got an LMG and a legendary helmet from Captain Butcher’s gear stash. Plus, we highlight one of Butcher’s Contracts and how to make sure you collect that reward with time to spare.

When you think of an LMG, “massive fire-rate” probably isn’t the first thing that comes to mind. But, that’s only because you haven’t gotten to know the GPMG. Described in-game simply as ‘most versatile in class’, the Fiore Di Morte II Epic variant is as deadly as it is good to look at. Take the Damage of an LMG and combine it with the Fire Rate of an SMG, factor in the 15% Bonus XP and the ‘Death Flower’ lives up to its moniker. But this beauty is not without its flaws: that high Fire Rate makes this baby jump around like crazy, taking Accuracy down a peg or two. Still, with its gorgeous design and fine-crafting from stock to barrel, your enemies won’t just be wondering how you killed them, they’ll want to know where you got that gun. 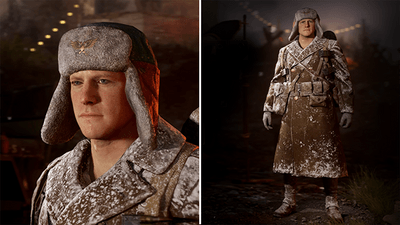 Trudging through the frosty tundra of the north, amid heavy snow and sub-zero wind chills, you curse the nightmarish conditions but, you thank your lucky stars for the Ushanka atop your head. A staple of the Russian armed forces since the early 1900’s, this fur-lined cap pairs form and function to make a soldier feel right at home in any hostile environment.

Want a Winter Supply Drop? Well, for the equivalent of your Payroll (100 Armory Credits) you can easily earn one. This Contract gives you 60 minutes to accumulate 65 kills in Kill Confirmed. Even if you’re new to Call of Duty, this isn’t an insurmountable task. In Kill Confirmed, players drop tags when they die and you can collect them for XP. Since getting kills is only half the game, you should easily be able to rack up a few extra kills simply by ignoring tag collection and focusing your efforts on getting kills. Tags left out in the open lure players looking to score points.  Leave the tags as bait and you should be able to get those 65 kills in no time.

That’s the Comms for the week. Winter Siege rolls on throughout the rest of the month, so complete those Contracts and stock up on winter gear from Captain Butcher while you can. Keep an eye out for next week’s edition of the Comms in the Call of Duty Newsletter. For previous editions, click below!