Once you can see them, it’s too late – Join the Mountain Division

With the recent changes to the Division system (check out the update overview here), it’s paramount for players to marry the altered skills to their favored playstyle. While needs vary depending on game mode, playstyle and dozens of other factors, there’s a strong argument to be made for joining the ranks of the Mountain Division.

The Mountain Division exists to be neither seen nor heard. They’re quiet and often invisible. So, if the element of surprise is your primary tactic, welcome to your new home. Here are your new Mountain Division skills:
Level I. Invisible to enemy Recon Aircraft & controlled streaks
Level II. Killed enemy death locations hidden
Level III. No name or reticle change when enemies aim at you
Level IV. Silent movement

These skills are geared towards making you an undetectable force of destruction. If you want to stay hidden, the Mountain is where you need to be. Here’re four reasons to mount up for the Mountain. 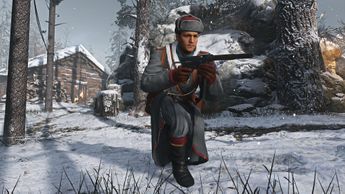 With Silencers now available on any SMG in any Division, you have the option to run quieter and more silent than ever before. Think about it: all of the cloaking skills of the Mountain Division, but you remain just as invisible even while you’re shooting. That’s how it’ll be when you strap on your favorite SMG equipped with a Silencer. Move silently, shoot silently and Recon Aircraft will be none the wiser. But, wait, you ask, what if I run into engagements too far away for a silenced SMG?  Sounds like somebody could use the Rifleman Basic Training. Make the M1 Garand your secondary and you’ll be ready for engagements at any range.

The new Mountain Division’s focus on stealth favors the lot of the melee killer. For those of you out for melee kills – Shovel, Ice Pick or knives – pair the Mountain with the Energetic Basic Training. The Energetic quickness combined with the Mountain’s undetectable movements is a truly lethal combination. Whether you go straight melee weapon, or attach a Tactical Knife and Suppressor to your Pistol, you’ll confound and frustrate War Mode opponents time and time again. Sure, they’ll think, according to the radar, the area I’m trying to infiltrate is clear of enemies. But, the last two times I ran in there I got shoveled back to my spawn point. Do I try it a third time? Do I try grenades first? Or, do I—aw, crap I just got shoveled again.

Although Sharpshooter Focus now comes standard with any Sniper Rifle, the benefits of rolling with the Mountain while sniping are still quite obvious. Staying hidden while sniping is crucial and each Division skill contributes to keeping you from being discovered. The only way a leveled-up Mountain Division soldier shows up on enemy radar is when they fire a shot. This means, so long as you don’t stay in the same place for too long, enemies will be guessing where exactly you’re shooting from. In order to one-shot enemies, it’s a huge leg-up if you’re off their radar and hidden from sight. And, for anybody who gets ambitious and tries to flank you? Surround yourself with S-Mine 44’s (Bouncing Bettys) and make ‘em think twice about sniffing around your sniper’s nook.

Hunker: Less grenade damage – Grenades through windows to shut down a sniper or melee master are common. Make it so they aren’t enough on their own to take you out.

Duelist: Dual pistols – If you’re going with a Pistol, why not go with two?

Instincts: Get a warning when targeted off-screen and detect enemy explosives – You’re as stealthy as can be, why not get a heads-up when someone has you in their sights or there’s a Bouncing Betty nearby. It’s literally a sixth sense.

With all of the revamped Basic Trainings, Division skills and attachments for weapons, you can go a lot of different ways. But, so long as you’re in the Mountain Division, none of those ways are wrong. So, keep creeping from cover to cover and join your covert comrades in the fight for freedom. If they can see you, it’s already too late. Join the Mountain Division.