Link up with the strong, straight-shootin’ soldiers of the Infantry.

With the recent tweaks to the Division system (check out the overview here), it’s important for players to ensure their Division choice matches their style of play. The Infantry Division provides a solid, all-around skillset useful in most aspects of combat. As you earn XP in the Infantry, you’ll unlock new Division skills at each level. Here they are:

Level III. While aiming down sights, have less idle sway

A quick glance at this list indicates the Infantry is pretty concerned with marksmanship. Those weapon skills are chief among the following four reasons why you’d be nuts not to consider the Infantry. 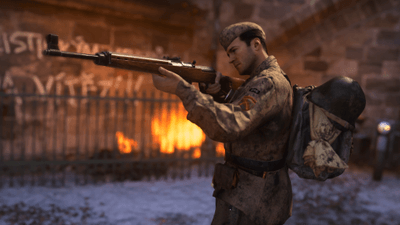 Surprise! These guys can shoot. Each new Division Level you reach greatly assists your Primary Weapon. Some of these skills are simple and help you out in an obvious way – an extra Primary Attachment gives you four attachment slots.  Others are a bit more nuanced, like, how much could faster movement while aiming down sights (ADS) really help? The answer: quite a bit.

For those of us who aren’t 100% accurate when we first aim at a foe, this Level IV Division skill allows you to easily find your aim on opponents as you strafe from side-to-side to elude their return fire. With all of those Attachments and the ability to dodge enemy bullets while aiming, you’ll undoubtedly win more gunfights. This extra ability is often the very thing that encourages people give those Semi-Auto Rifles a try. Don’t let the M1 Garand, M1A1 or SVT-40 intimidate you. You’ve got that extra movement, use it. It’s these subtle movements during gun battles that often prove the difference between a death and a Near Death Kill medal.

The Right Tactics For The Job

Because of your additional weapon skills, the Infantry lends itself to medium-to-long ranged engagements. With Level III, you’ll likely shoot straighter thanks to less idle sway. Because of this, the preferred strategy for Infantry members is a bit more cautious. If you want to run-n-gun, try the Airborne. If you want to carefully traverse the map and win a higher percentage of engagements, you join the Infantry. This isn’t to say don’t move. It just means Infantry soldiers tend toward a more patient style of play. This patience rewards and enhances the Division skills you’ll earn along the way. What good will that decreased idle sway be if you’re consistently engaging enemies three feet away from you? Take advantage of that and faster ADS movement and pick them off from the edge of SMG-range. The Airborne may be faster, but you won’t have any trouble tracking them through your scope as they try to run away. 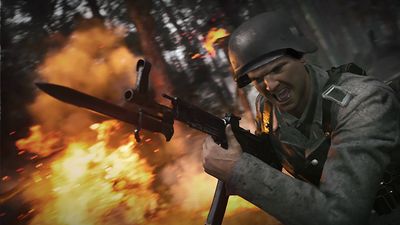 While the Infantry doesn’t lend itself to a rushing playstyle, that doesn’t mean they aren’t deadly up close – quite the opposite. A Level II Infantry Division member gets an extra Pistol Attachment and the ability to switch to it more quickly. This allows you to run with a medium-to-long range type of weapon and still be effective in close-quarters situations. Swapping to a Secondary now happens in the blink of an eye. No trying to squeeze the round peg of the SVT-40 into a square, close-range hole. Just swap to your short-range Pistol when you see someone close and they’ll regret ever trifling with the Infantry. And, if that Pistol is too noisy? Equip the Tactical Knife attachment and let the one-hit melee kills rain. Trust us, you’ll be thankful you have it when you need it.

We’ve learned this lesson from pairings across time, from peanut butter and jelly to angst and teens to Silencers and the PPSh-41, some things just go well together. And the Infantry Division is no different. The Division of skilled weapon experts can go in a couple directions when it comes to picking a Basic Training. We’ve got a few preferred that we’ve had some success with. Let’s start with Hustle. It’s pretty simple, since you’re great with all weaponry, the ability to reload faster and while sprinting seems a natural fit. Reloading leaves you vulnerable, so why not shorten the amount of time you’re defenseless? This works well in chaotic, objective game modes like Domination or War. Another fine choice is Shifty. With such a focus on marksmanship, why not load up your Pistol just the way you like? You’ll now have three pistol attachments and unlimited ammo. Switching to your Secondary when your Primary runs out of ammo doesn’t have to be a last resort. With Shifty, it’s often preferable.

In short, it’s tough to go wrong with the Infantry Division. It’s great for any player of any skill level – whether you’re just getting your feet wet or polishing off your 9thPrestige. Chances are, it’s a Division that’ll complement some things you already do. So, why not join up with the Division that’s wicked with weaponry. Lead the charge. Join the Infantry.