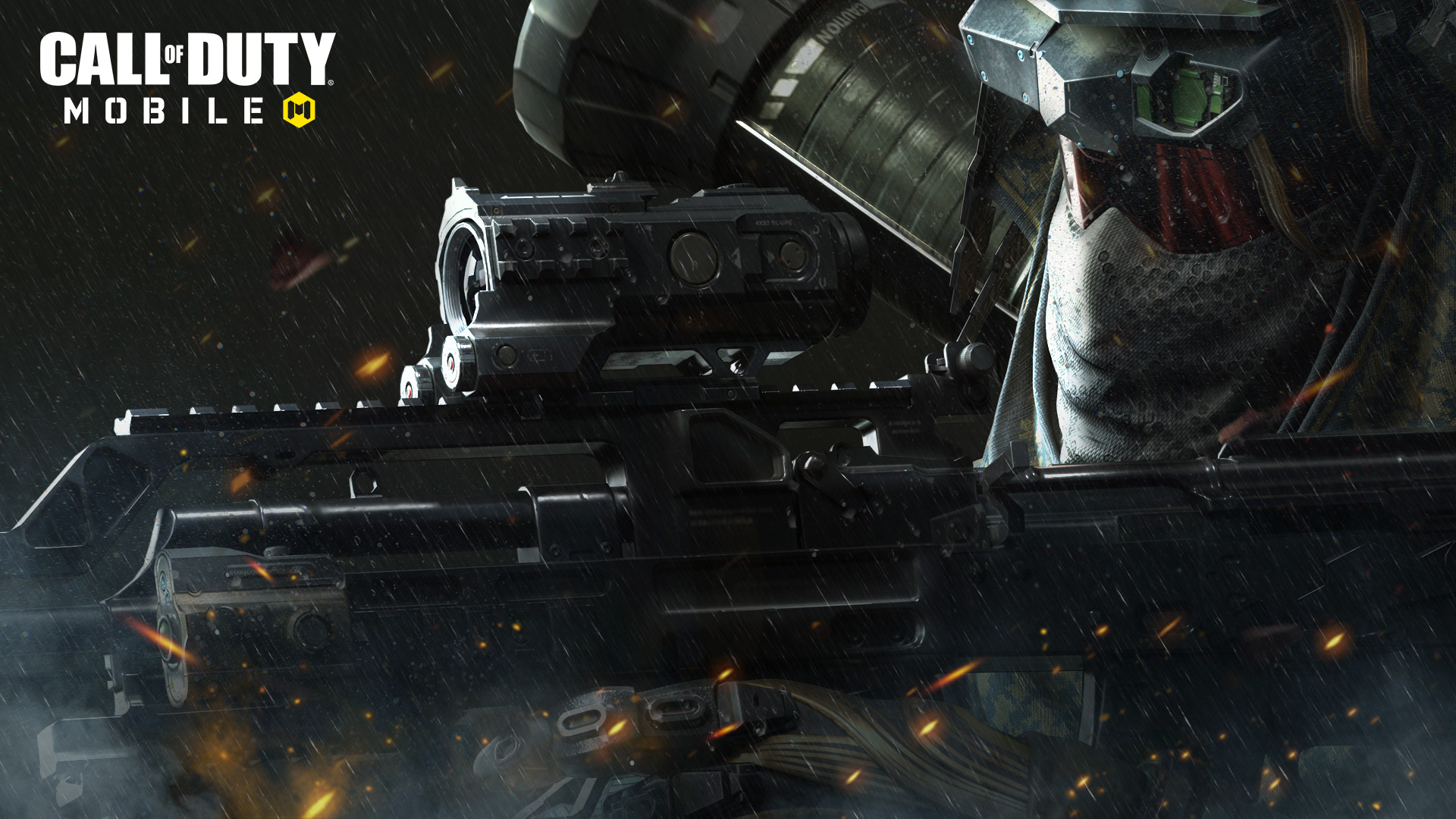 A fully equipped Loadout in Call of Duty: Mobile Multiplayer isn’t complete without an Operator Skill, a special weapon or equipment piece that can turn the tide of battle.

During a Multiplayer Match, Operator Skills charge up over time and are activated by tapping the Operator Skill icon on the right side of the screen once charged. Operator Skill charge times are also accelerated by earning score through taking down enemies and completing in-game objectives.

As you level up your soldier with experience over time, you’ll gain access to the five Operator Skills, which offer a range of powerful tools that fit a variety of playstyles. Plus, through a recent event, a sixth Operator Skill became available for all players to earn.

Here’s a rundown of the Operator Skills, as well as what you could do to maximize the potential of these game-changing Loadout items: 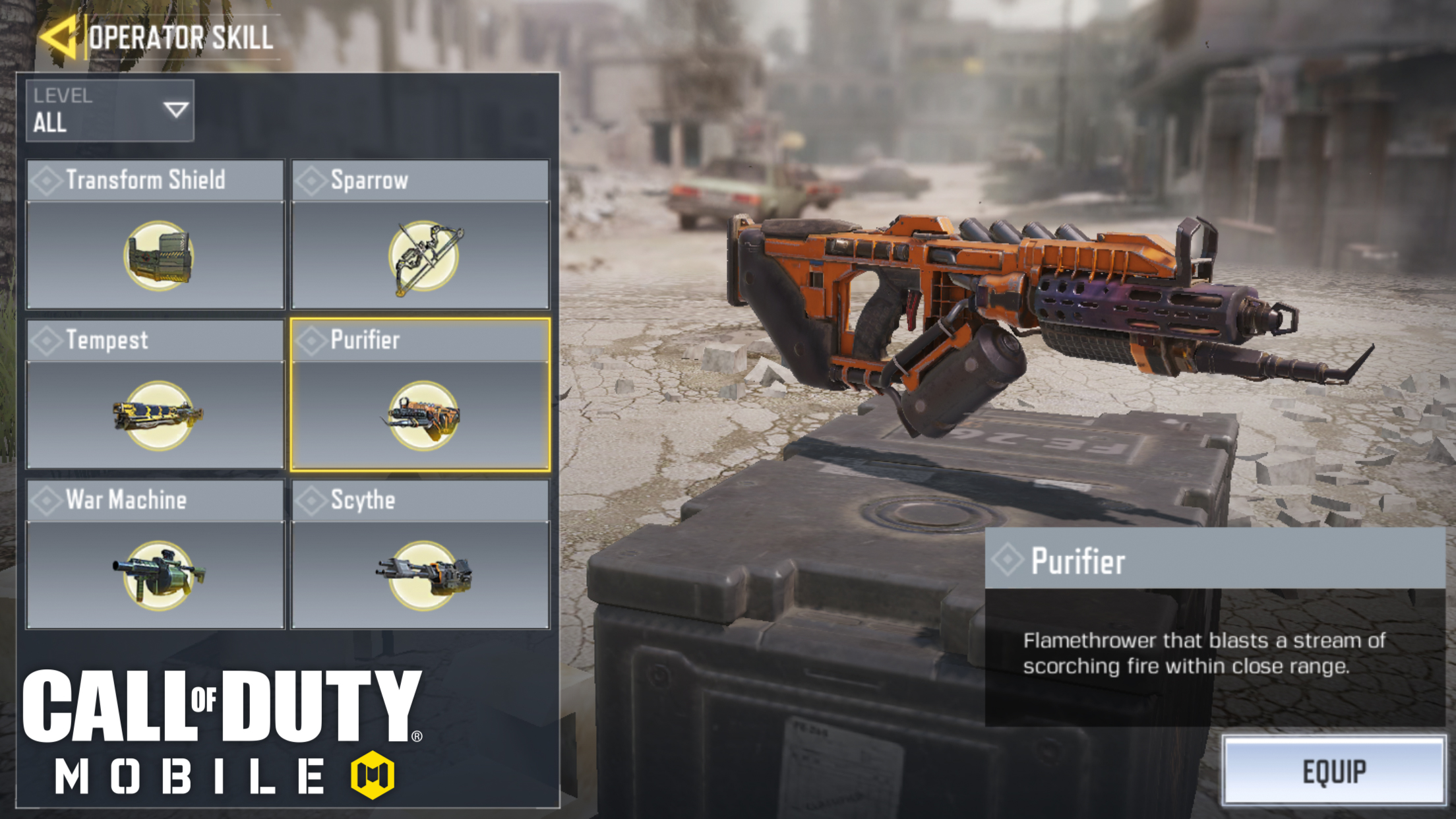 Flamethrower that blasts a stream of scorching fire within close range.

Upon activation, your soldier will whip out this flamethrower; hold down the fire button and unleash a heat wave that will burn enemies to a crisp.

As detailed in the Purifier’s in-game description, the flamethrower’s main drawback is its short range. Expect to do plenty of damage up close against enemy forces, but don’t get your hopes up in attempting to burn someone sitting across the map.

With that in mind, it may be wise to stick to indoors combat or in cramped spaces on the map. However, most maps in Call of Duty: Mobile usually play fast and frenetic, so using the Purifier shouldn’t be too difficult. Figure out those hot spots where enemies tend to group up and prepare to roast the competition! 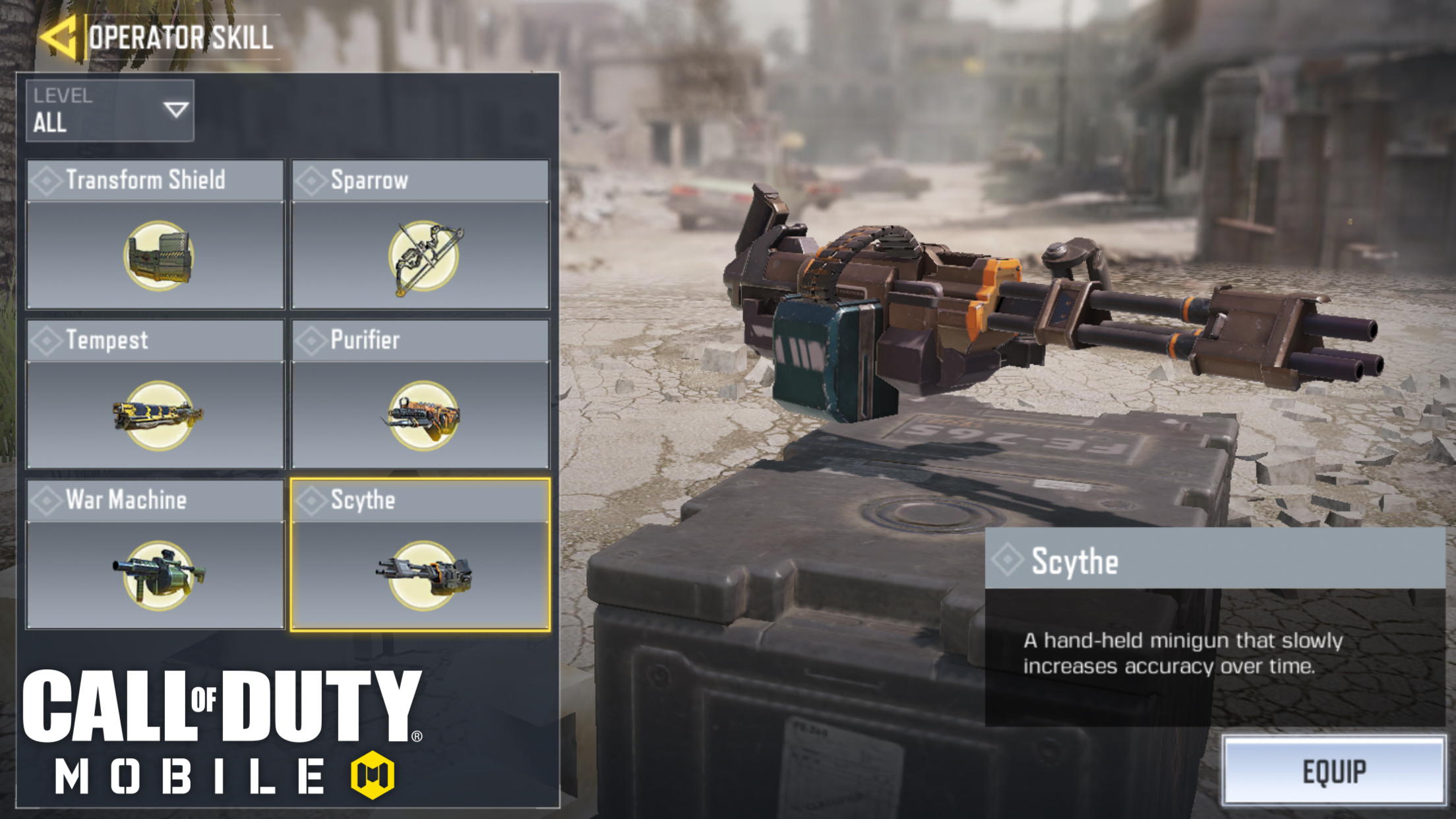 A hand-held minigun that slowly increases accuracy over time.

This minigun fires fast and wildly at first, then continues its torrent of bullets with greater precision over time.

Like other Operator Skills, the Scythe is best used when put up against multiple enemies. A normal weapon usually pails in comparison to this mini-gun, so going up against two, three, or a whole squad of enemies may not be an issue.

Given the boot-up time needed for the Scythe to have better accuracy, it may be wise to “pre-fire” this weapon before entering an engagement. In other words, aim and fire the Scythe seconds ahead of when you think an enemy is nearby so that this weapon is a bit more accurate during the ensuing fight. 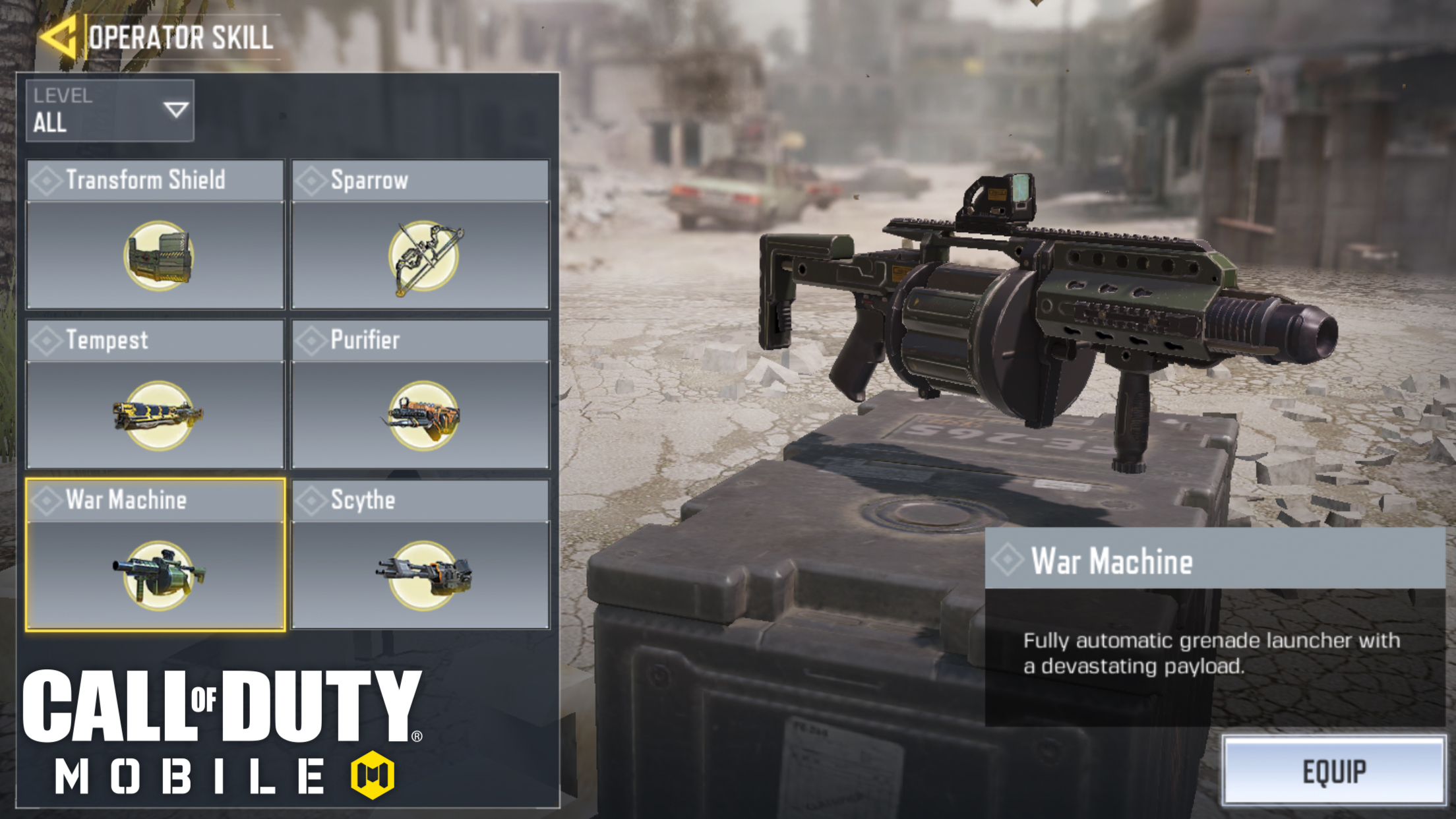 Bring in the boomstick; the War Machine is a demolition expert’s dream, as it offers multiple grenade rounds in a circular drum and a fast-firing launcher to send them towards the enemy.

The War Machine’s payload travels in an arc towards targets, with direct hits being an instant kill and explosions within a few feet also typically resulting in a knockout. Firing a War Machine towards a group of enemies is a solid idea, as these explosives are deadly enough to take out a handful of enemies at once.

Another option is to aim these grenades at explosive objects, such as cars or flammable barrels, that are near enemies. If done correctly, the War Machine will set off these explosives and send unaware hostile forces flying. 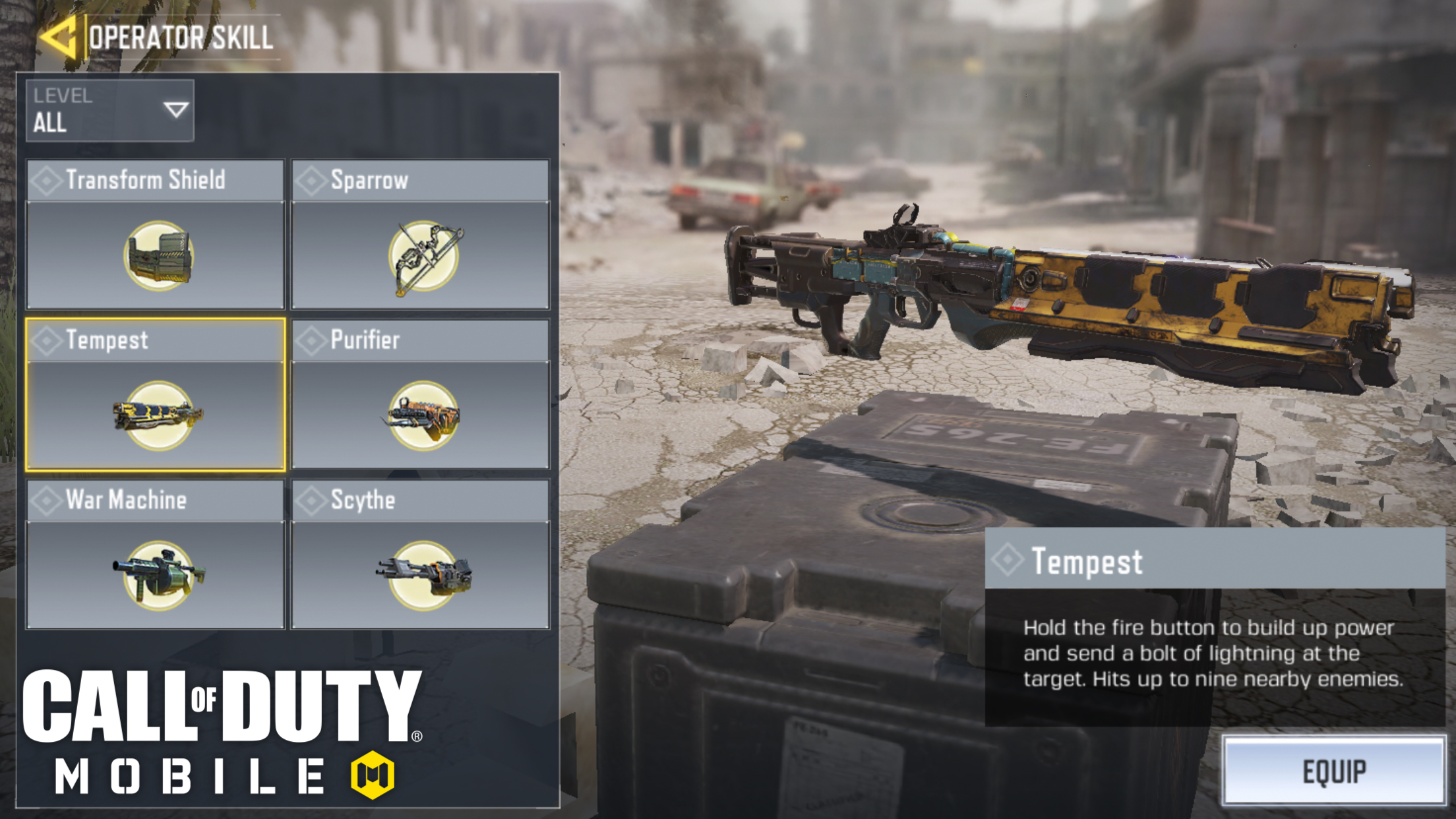 Hold the fire button to build up power and send a bolt of lightning at the target.

Amp up your loadout with this electrifying weapon, which can shock enemies at any range with its lightning bolts.

The Tempest’s major strength is its ability to potentially turn an entire enemy team into a massive electric current. When a lightning bolt hits an enemy, any enemy within a few feet will also be downed as the current travels to other foes within close range.

Therefore, even though this weapon is great in one-on-one combat, it may really shine against a group of enemies bunched up together. Find those bottlenecks frequented by multiple enemies, equip this Tempest, and fire away… And its effectiveness may shock you.

When using the Tempest, be aware of the short charge up time before it fires its deadly bolts. Have a bit of cover on hand to duck and jump out of to mitigate this charge time, less you get shocked by an enemy before a single bolt is fired. 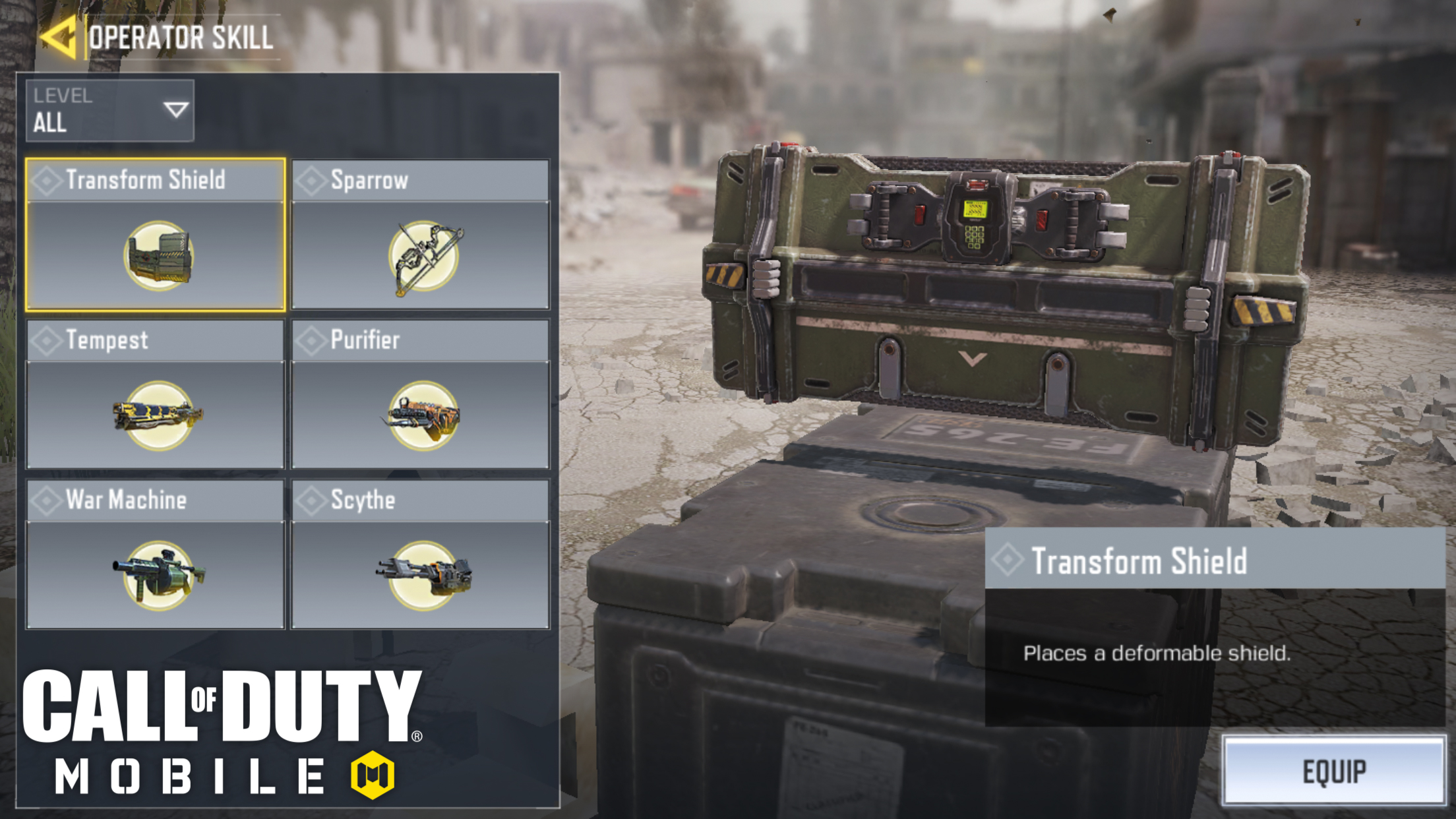 Unlike any other Operator Skill available at launch, the Transform Shield shines as a defensive tool.

The Transform Shield is a piece of mobile cover, which can be deadly in the hands of an astute soldier or budding tactician.

When using the Transform Shield, think about where it might be an inconvenience for someone to get around this shield. Doorways to large indoor areas, entrances to major lanes, or access points to flank routes may all be wise places to put this deployable cover, which can be used to slow an enemy down or act as a stronghold for you to use against hostile forces. Also, when the Transform Shield is deployed there will be a flash effect that occurs in the radius around the shield that could disorient enemies.

Another strategy to consider is deploying it in the heat of battle where cover is limited.

While the Transform Shield may not directly take down enemy forces, it is still an Operator Skill to consider as it could change an entire map’s structure and flow. 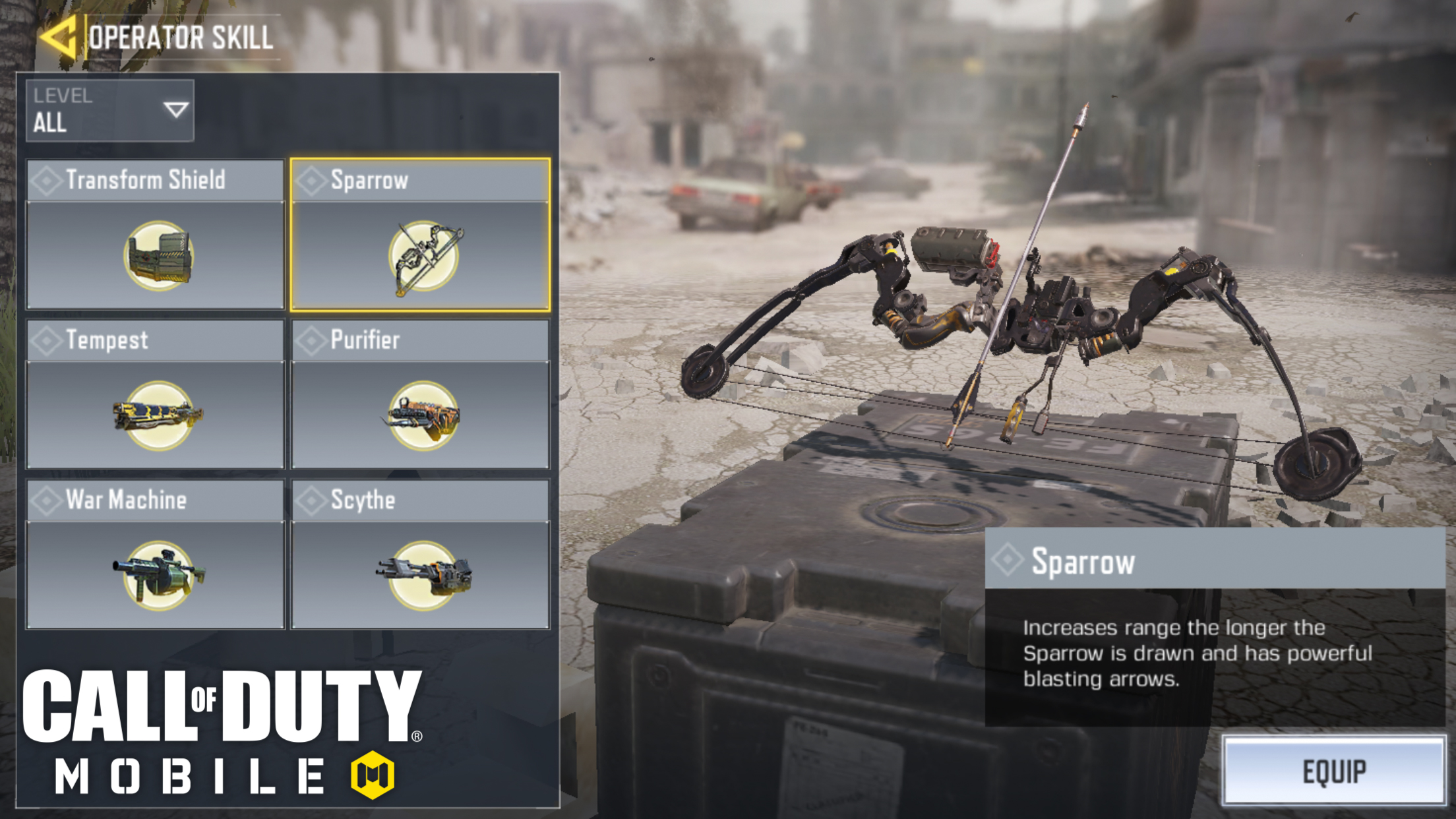 Increases range the longer the Sparrow is drawn and has powerful blasting arrows.

Who said the bow and arrow was ancient technology?

The Sparrow is great for hunting down the opposition.

As the tooltip suggests, keeping the Sparrow drawn for a long time will maximize its range. This may be useful for hitting targets that are far away.

However, it’s also possible to volley several arrows forward at a shorter distance by tapping the fire button. Try this out should you need to take out multiple enemies at once.

Last, but certainly not least, the arrow’s explosive payload does do a fair amount of damage. However, scoring a direct hit of an arrow on an enemy will instantly incapacitate them. Try to aim for center mass with the Sparrow, and the resulting explosion may also catch other hostile forces in the area.

These are not the only six Operator Skills in the game; be on the lookout for more powerful abilities and weapons from previous Call of Dutygames to make an appearance in Call of Duty: Mobile.

But for now, have fun playing around with these Operator Skills in your next Multiplayer match!