A Call of Duty®: Black Ops 4 map released for Black Ops Pass holders with Operation Spectre Rising, Artifact turns a natural environment into a unique battle-ground. Here are a few tips for mastering it.

"In the remote landscape of Iceland, hired treasure hunters have tracked down and unearthed an ancient zombie artifact. Unfortunately for them, they aren’t the only ones.”

This edition of Map Spotlight looks at Artifact, a map released during Operation Spectre Rising and available to all Black Ops Pass holders. Don’t get too caught up in the natural landscape and local wildlife here; there is a battle to be fought over an ancient zombie artifact, and we’re here to give you a few tips before dropping into the fight:

This part of Iceland is filled with rocky, unforgiving terrain. Situated in between iceberg cliffs and a boiling lake, heated naturally from below, the site of the artifact is relatively untouched by mankind… save for the giant water pipeline running overhead and excavation tools strewn about.

The standard-team spawns are east and west of the center, with the map’s physical layout being a roughly rectangular shape. For the west spawn, the glacier to the north has a ladder leading to a one-way ice slide that can be utilized to get behind enemies in the glacier cave, as a one-way slide unique to this map. Those who spawn on the east can rush to take the high ground to the south but should be wary of the deadly geysers.

What defines this map is its platforming, giving players the ability to quickly change elevation and paths by jumping across the rock formations. Players can create their own engagements and sightlines by taking advantage of the landscape. With limited interiors, most battles will take place across the terrain, so consider mastering it and you might take the upper hand in a firefight.

Oh, and we stress this once more; don’t get distracted by the wildlife here. Yes, the bunnies and puffins are adorable, but we have a war to win. 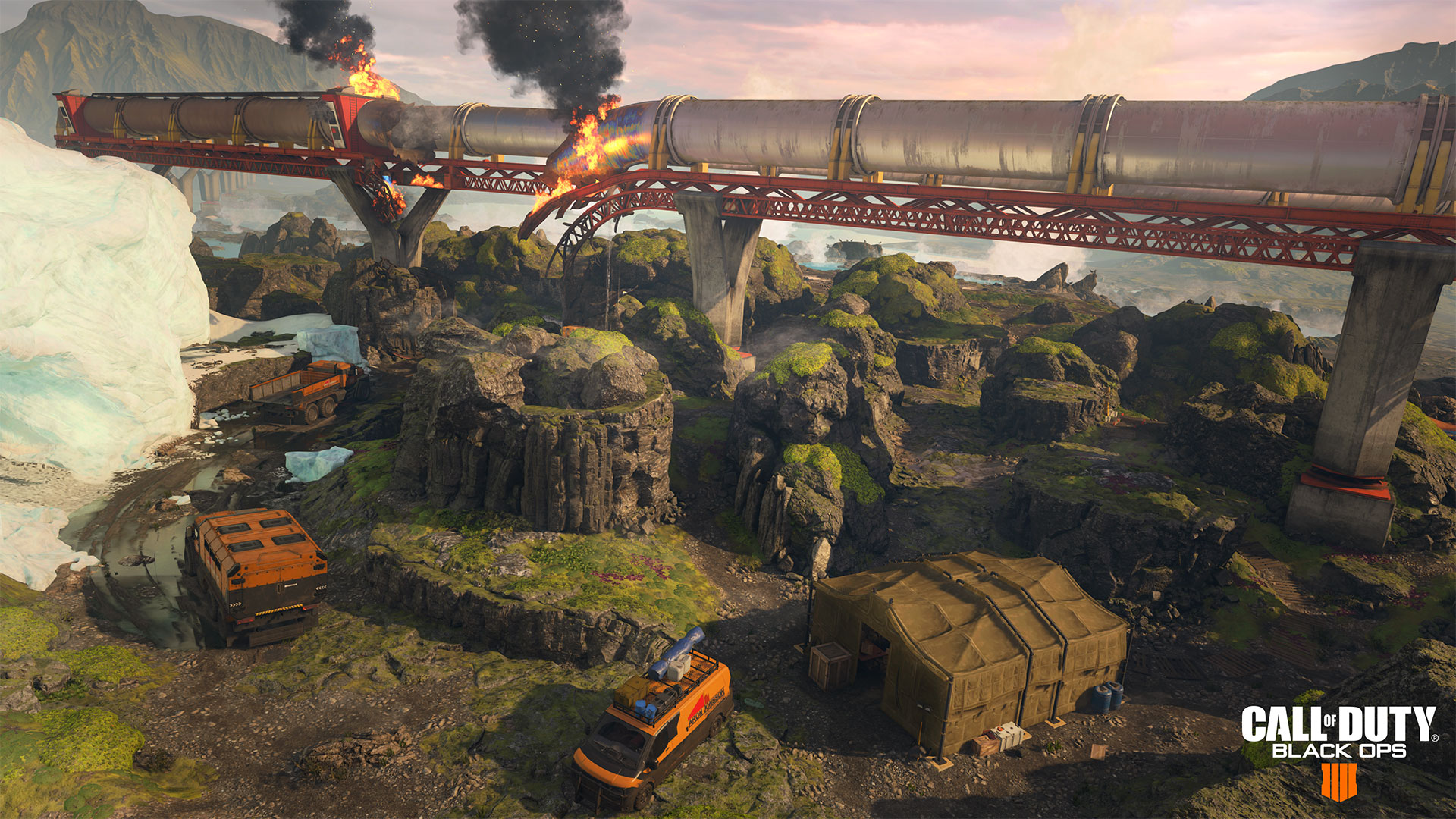 Open space means open season for long-distance weaponry, but there are plenty of places for shotguns, submachine guns and the like to shine.

One particular place that usually sees play for close quarter builds is the glacial path. The caves around here are catalysts for tight gunfights, as the rocks and ice form narrow passages in this lane with little room for two-way traffic.

Another is the valley in the dead center of the map. Be forewarned that enemies can (and most likely will) shoot down here from atop the rocks, so make use of the pipes and other exit routes. There are also plenty of tight spaces created by these massive rocks around the map, which gives short-ranged weapons the potential for success.

So where do the snipers come into play? Well, with this map having open space and natural features, there are plenty of rocks and a massive glacier to take up residence. While there is a bit of risk when taking the high ground — no man-made walls or buildings here to hide in! — the sightlines on this map are as much of a vista as the land itself.

Although every Specialist can make use of this map, Torque’s ability to lock down lanes is noteworthy. Consider dropping down Torque’s Barricade near objectives to block critical lanes or placing Razor Wire to redirect the opposition’s path.

For most objective game modes, the central valley is a hot spot due to it being an objective point or near to one. With this in mind, be cautious — or at least have a plan — when approaching this area. Consider knowing the strengths and weaknesses of your weapon, communicating with teammates to ensure a good mix between short- and long-range lethality, and charging into the vale with confidence.

Because this map is so open to the elements, scorestreaks can be well-placed on objectives for maximum damage. There is no harm nor foul in setting up scorestreaks on outside objective points, or should they be partially in caves, right on the paths to said spots.

With this in mind, there is a huge opportunity for you to takedown enemy streaks. Consider grabbing a class with a Hellion Salvo and Engineer, paying attention to audio updates for enemy support from above, and starting to be the ultimate teammate by knocking those streaks out of the sky.