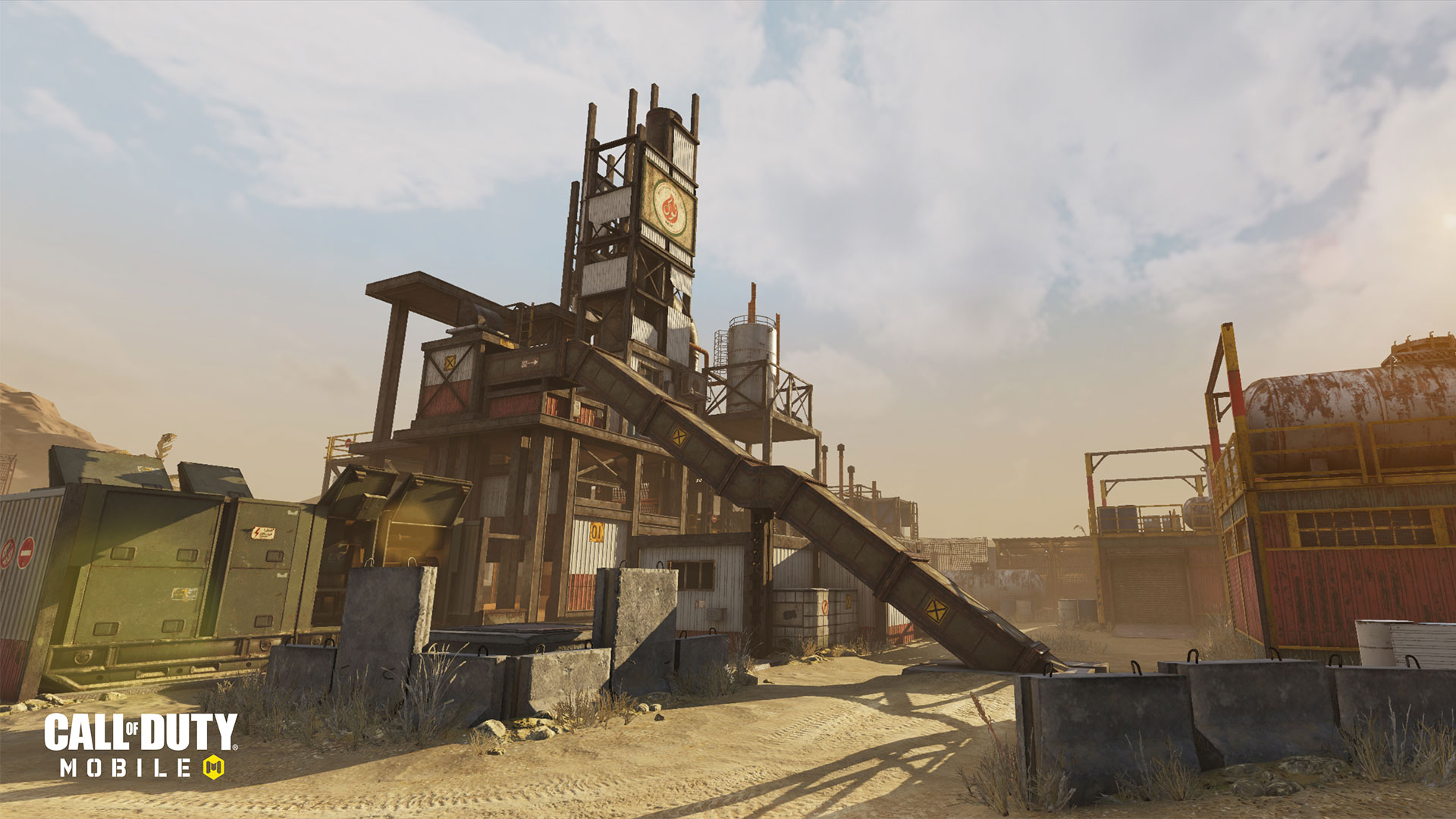 Showdown at Rust, the fan-favorite Multiplayer map from Call of Duty®: Modern Warfare 2. This Map Snapshot gives you everything you need to come out on top.

Showdown at Rust, the fan-favorite Multiplayer map from Call of Duty®: Modern Warfare 2. This Map Snapshot gives you everything you need to come out on top.

Whether you’re an old Rust pro or you’re playing this map for the first time, we’ve got the strategies for your posse to take over this town. Read on for a full map overview and tips for mastering this classic. 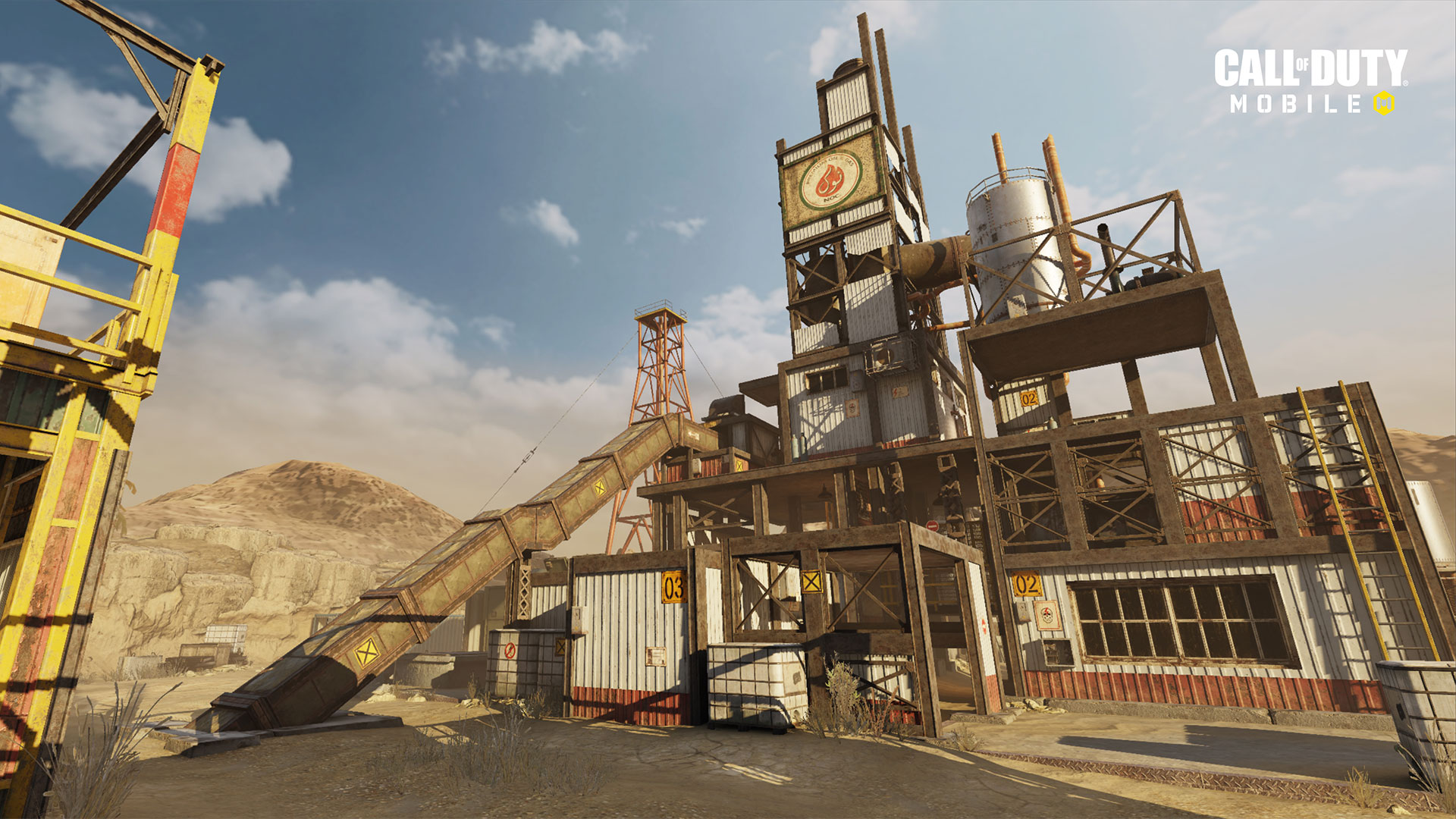 Rust is a small sized map set in an oil yard in the desert. The large central tower overlooks a field of pipes, fuel, shipping containers, and other industrial features. The tower’s top platform offers a near total view of the map below and because of that is such a highly valued power position. Race up the south-facing exhaust chute or climb a ladder to reach the top. It’s a high risk, high reward action that will tempt someone every match.

To the south, a barricade and fuel depots offer bunched up cover where CQB shines. Be ready to engage at a moment’s notice, and similarly in the maze underneath the tower, another close-quarters hot spot. Learn the layout here to cut off enemy movement in a vital part of the map.

The sight lines open up a bit to the east, though watch the fuel tank and shipping crates for enemy movement. A south-facing ladder offers one of two access points to the tower’s middle platform here, where players gain a commanding view of the east side of the map with nearby pathways winding around and further up the tower.

In the north, the action takes place over and under a large pipeline. The pipeline splits, in one direction onto the tower’s middle platform and in the other out against the north fence toward an oil derrick in the northwest corner of the map. Expect a lot of action around the oil derrick, from sharpshooters on top of the structure to enemies on the ground using it for cover.

Lastly, the open west end features cover to the north and south, but is largely open to attack in the middle, save for a blue container offering a short, covered path along the middle edge. While the open sight lines mean fewer close-quarters surprises, this section is near open ground to enemies on the tower. Always, always check the tower. 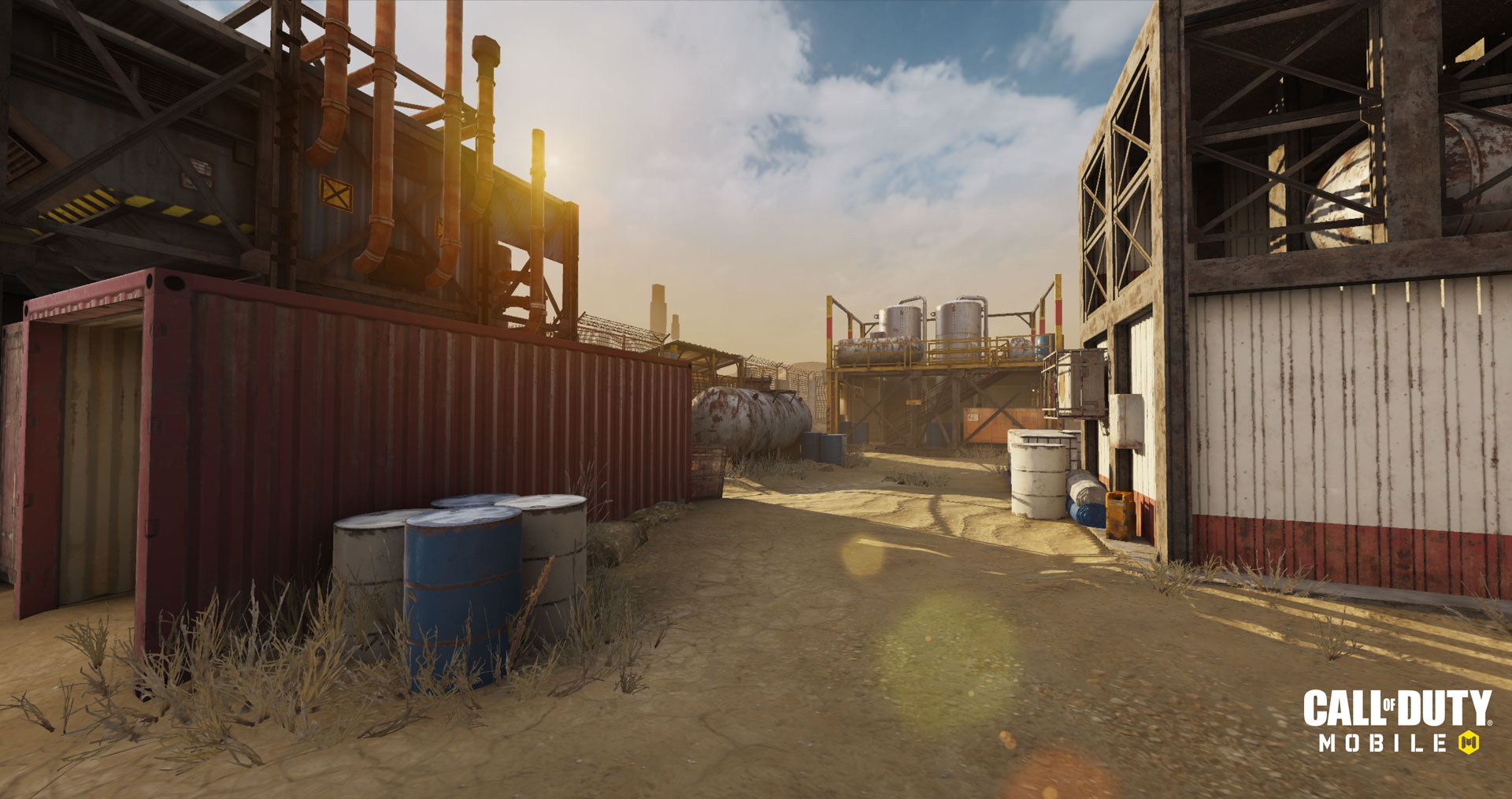 With its tight, snaking design, expect a lot of CQB loadouts in Rust. Players with SMGs and shotguns can take out careless runners in an instant as they weave between cover near the tower or the fuel depot. There are mid- and long-range opportunities as well, in the north and west sides of the map and of course as you climb up to greater heights on the central tower.

Unless you know that an area is clear, it’s best to avoid running along the middle open path. It’s almost always better to move more meticulously through the map, from cover to cover. Rust is small, and with constant pressure from the ground and the tower, you want to minimize as many sight lines on your character as possible.

If you’ve made it up the tower, have fun taking shots at enemies below, but don’t neglect your own defense in doing so. Prioritize targets who are gunning for you over those concentrated on the ground floor and keep checking the tower pathways to your position to fight off enemies attempting to take over your spot.

And it’s not all about fighting over the tower — you can do well on the ground, too. Stake out an area suited to your loadout and shoot down enemies preoccupied with king of the hill. When possible, use cover to defend against ground attacks when you’re aiming up, and against tower attacks when you’re aiming straight. In such a tight, vertical arena, the player who best controls their angles often comes out on top. 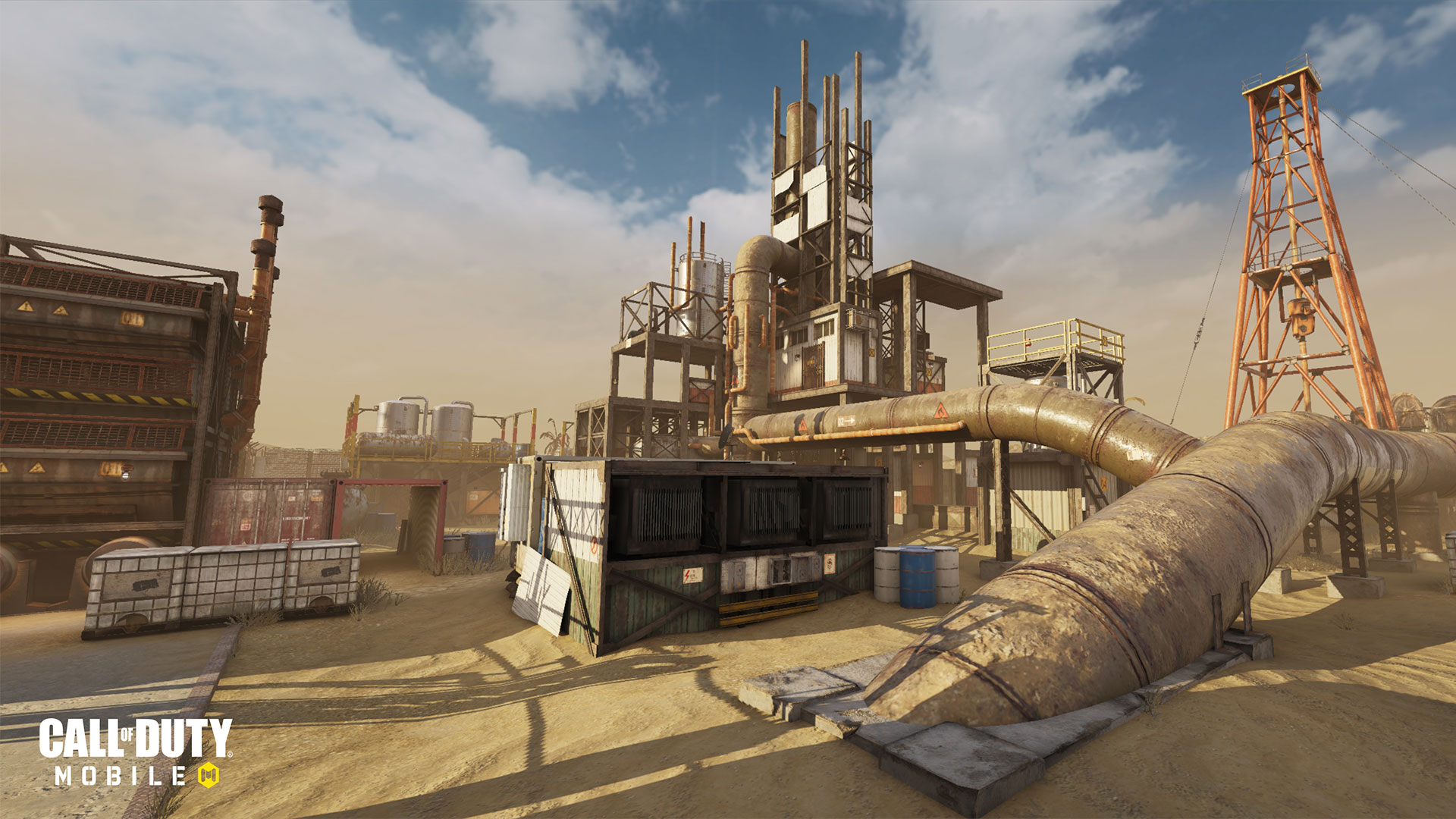 Familiarize yourself with the central tower as soon as possible. As the dominant structure on the map, it’s important to know its full layout, from the bottom maze to the middle and top platforms. Once you’ve seen the myriad sight lines available to players on the tower, you’ll be better prepared to defend your own tower position and to better survive on the ground.

Consider using an assault rifle in your first matches for a versatile attacking option that performs well throughout the map. If you gravitate toward close quarters areas, switch to an SMG or shotgun; if you’re set on dominating from the tower, add a holographic sight to an assault rifle or LMG, or go all in as a sniper.

Use smoke grenades when you need to move through volatile areas fast, to avoid the need for slow movement through cover, and save your Operator Skill for those inevitable moments when you need to break through the enemy line. Some well-placed mines from the H.I.V.E. or a barrage of Death Machine bullets can turn the tide of battle when it matters most. 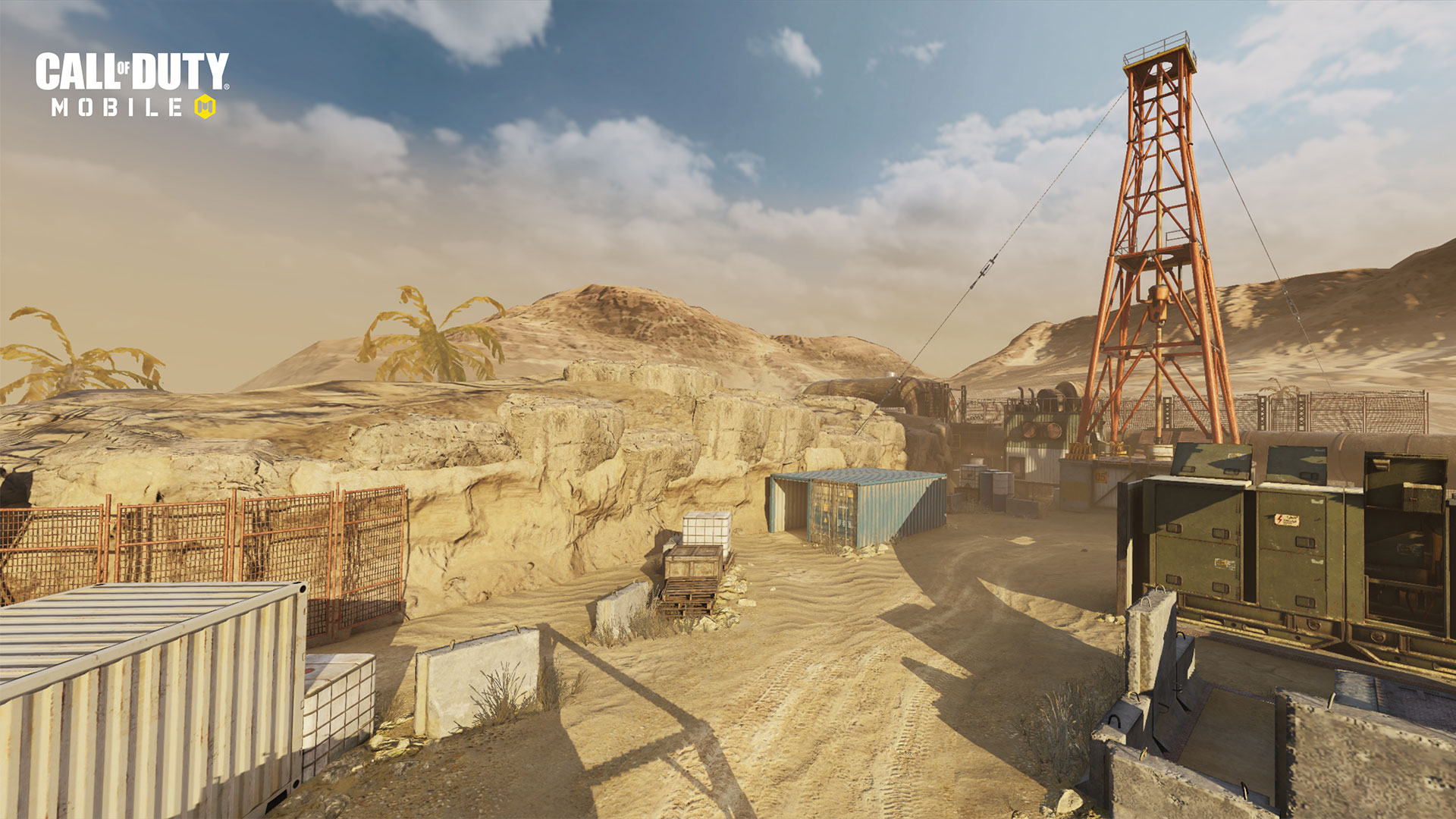 There’s a lot of open ground here, so expect plenty of aerial Scorestreaks. Use the Hunter Killer Drone for a low-cost attack that’s great for fire and forget actions against enemies in the tower. Once you’ve really learned the map and start building up long streaks — or can get lots of kill paired with the Persistence perk — consider equipping higher level Scorestreaks like the MQ-27 Dragonfire, Stealth Chopper, and VTOL. You’ll decimate the enemy as they attempt to fight off attacks from so many angles. If this happens to you, switch to a loadout with a launcher secondary and do your best to clear the skies.

If you’re more defensive minded, try the Counter-UAV to scramble the enemy mini-map and the SAM Turret for robust anti-air support. The combination of reduced intelligence and aerial denial will put your enemies on their backfoot as they try to cope with your arsenal.

Be careful when calling in a Care Package or the deadly XS1 Goliath, as the small map size heightens your chances of getting ambushed before you can retrieve the goods. Wait until you’re in a defensible area with nearby teammates to reduce the chance of losing out on your hard work. 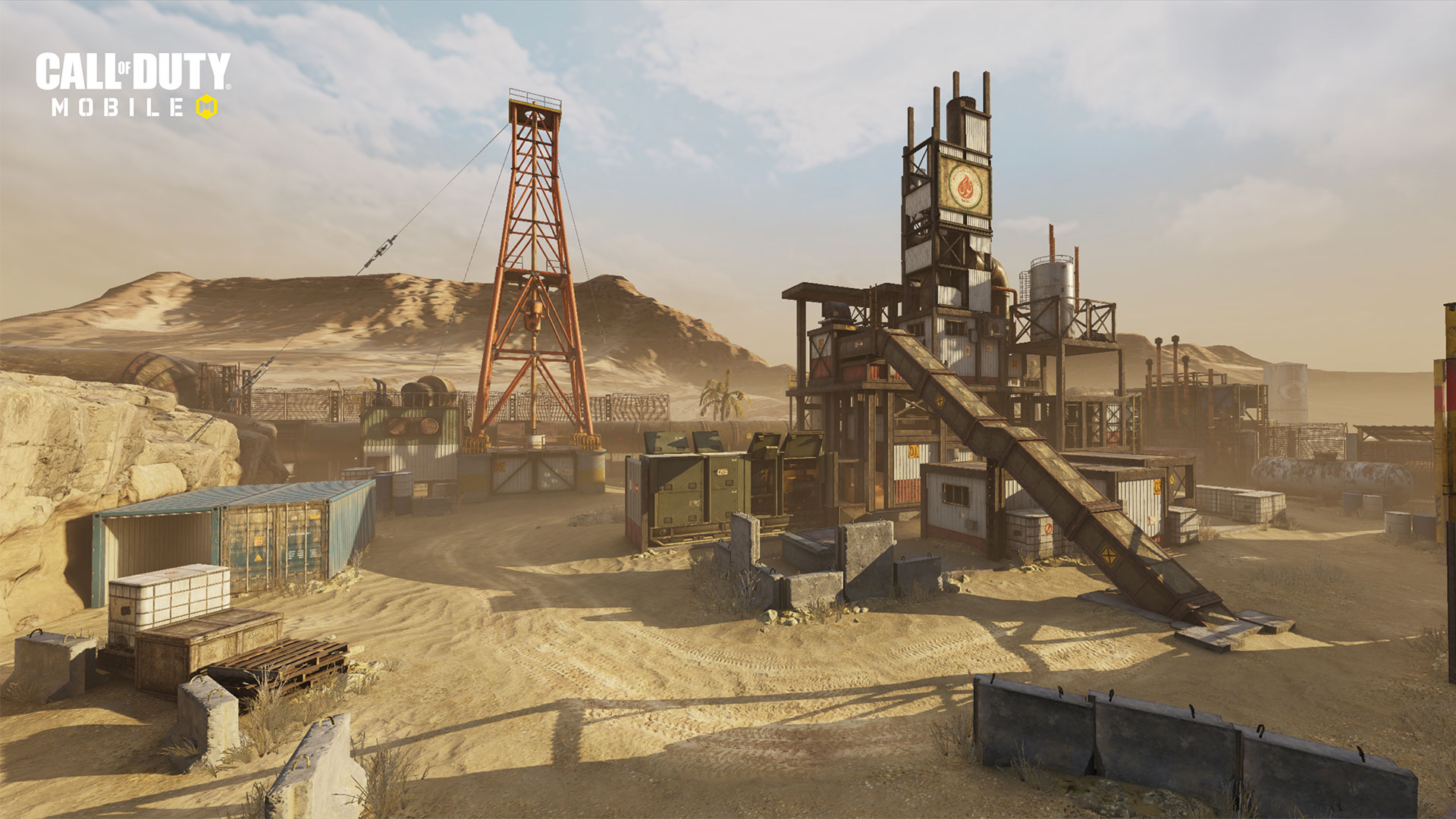 Let’s dig into the objective modes on Rust: Domination and new this season, Capture the Flag.

The Domination flags are all on the ground floor, spaced around the tower and close enough that they may change hands many times throughout a match. Remember, it’s better to hold and defend two flags well than to try for all three and lose control in the process. Play aggressively on the ground until you’ve got two flags and then pull back into a defensive position. If you just can’t resist, fight your way up the tower and keep your teammates covered.

The aforementioned smoke grenade is a great tool in Capture the Flag, especially when you’re on the attack. Cover your way in or your way out depending on where the enemy is most concentrated. The Tracker and Alert perks do well here, giving you a heads up to nearby enemies hoping to surprise you along the way. Expect a fight for the tower where defenders can cover routes from above. Join in or stick to the bottom of the tower to clear enemies from the middle.

Regardless of the mode you’re playing, be flexible in your approach to the objective. Analyze the flow of the match and take up a position to best exploit the enemy team’s weakness. 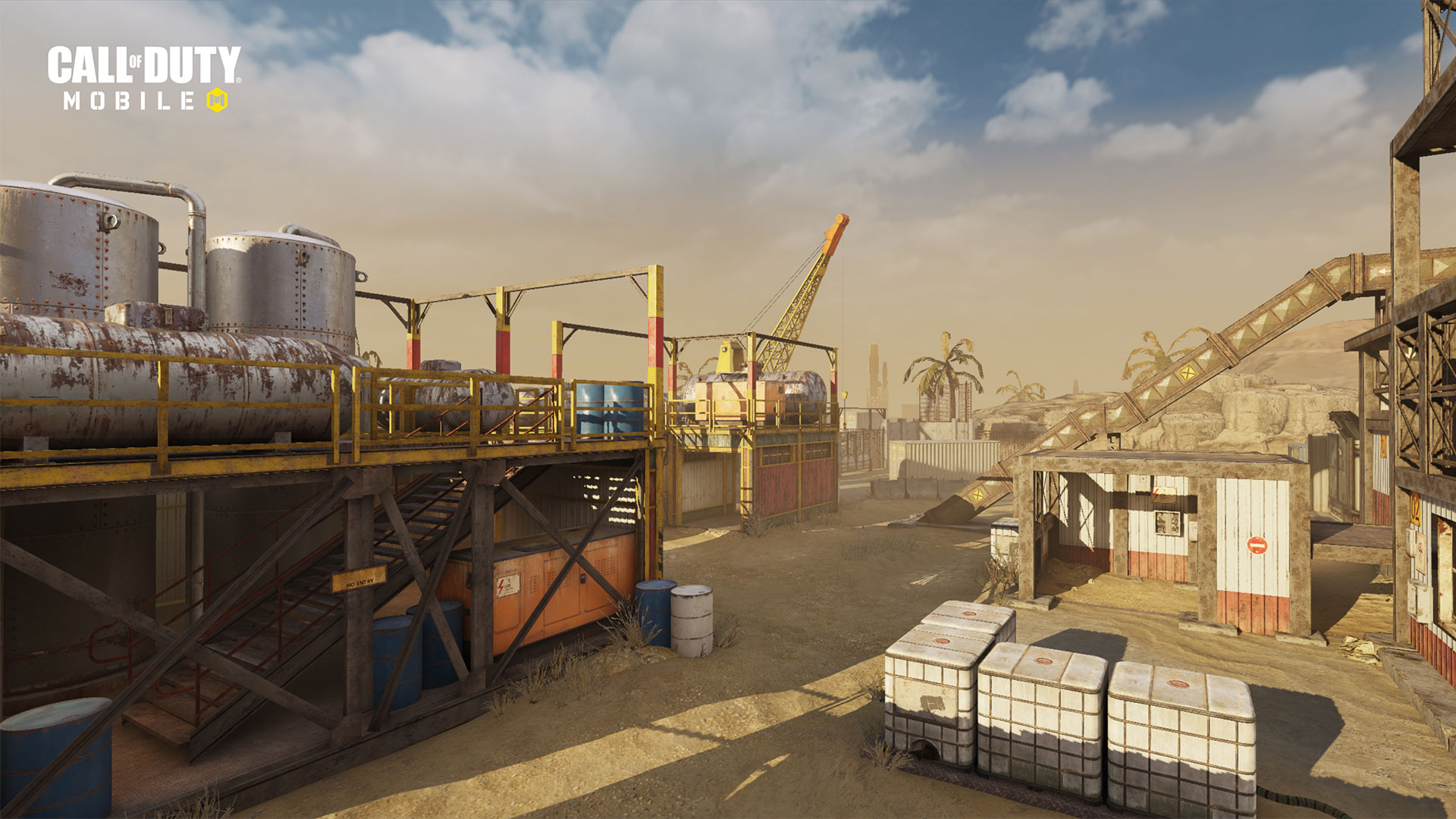 10. Rust has been around for a long time, but don’t be discouraged if you’re coming in fresh. Though the layout is intricate, it won’t take more than a few matches to learn the design, quickly putting you on even footing against even the most grizzled veterans.

9. Get that throwing arm in shape. The top tower platform is small in size, meaning a good Grenade throw can easily clear out a pesky enemy sharpshooter. Once you’ve got the angle right, try using Demo Expert for extra explosive damage.

8. Looking for an epic killcam? Equip the Gravity Spikes and slam down to the floor from the top tower platform, like a human missile zeroing in on its prey. 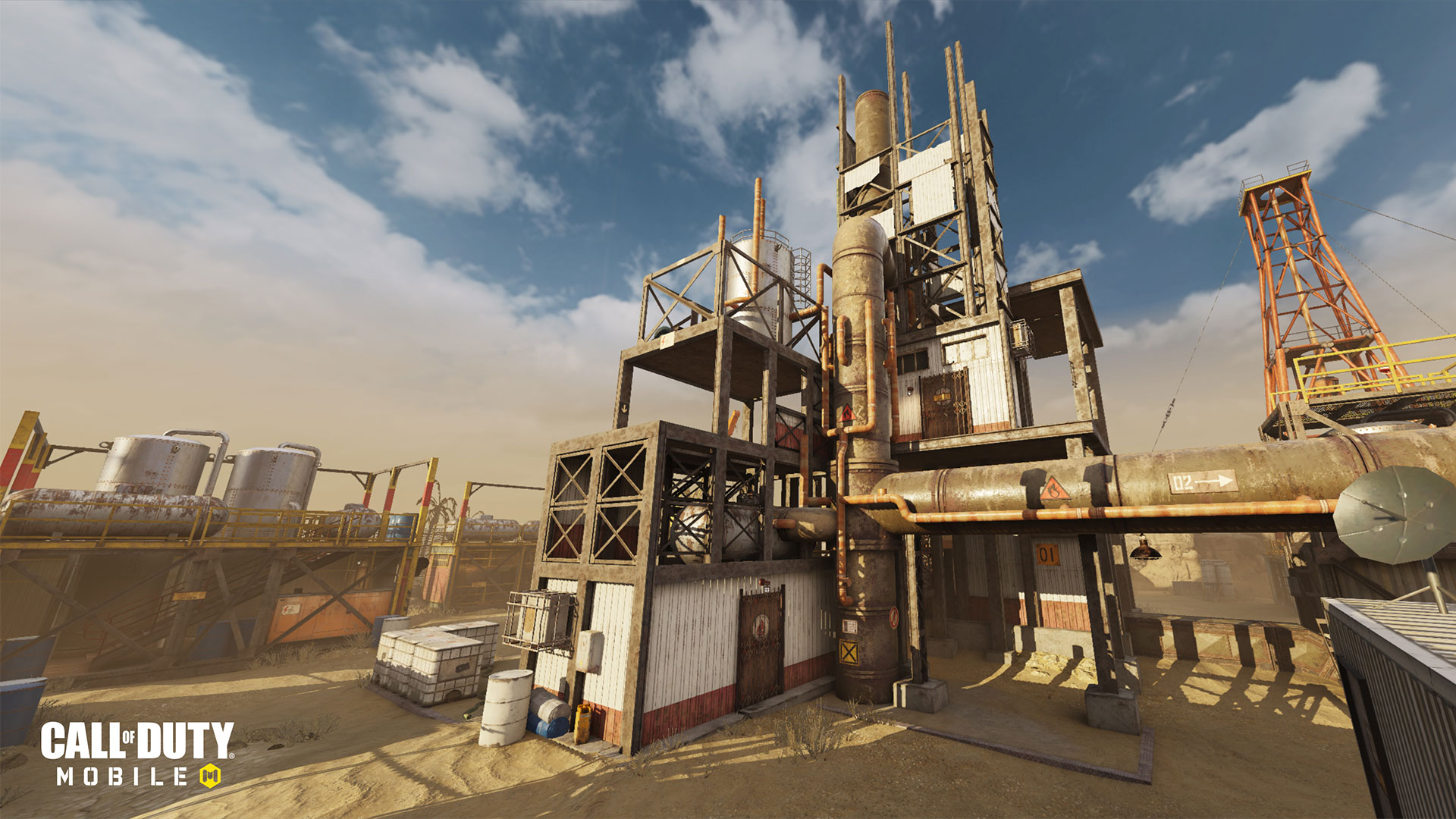 7. While everyone else is fighting over the tower, take up a position by the oil derrick in the northwest corner of the map. Get on top of it when the tower is clear of enemies for open sight lines along the north and west paths and stay below it for cover when the tower is occupied.

6. Use a shotgun and stick to the bottom of the tower. The mazelike layout gives you plenty of opportunities to land an up-close shot on enemy players, a great tactic for denying their plays in objective modes.

5. Breathe through the chaos. Rust’s design encourages frenetic gunplay, but sometimes the best tactic is to slow down and hold your position. Take out enemies as they come to you, then move on when the coast is clear.

4. Break out the Extended Mag and a Laser Sight. While careful precision has its moments, so does fast movement and a stream of bullets. Strafe and fire from the hip without running dry. 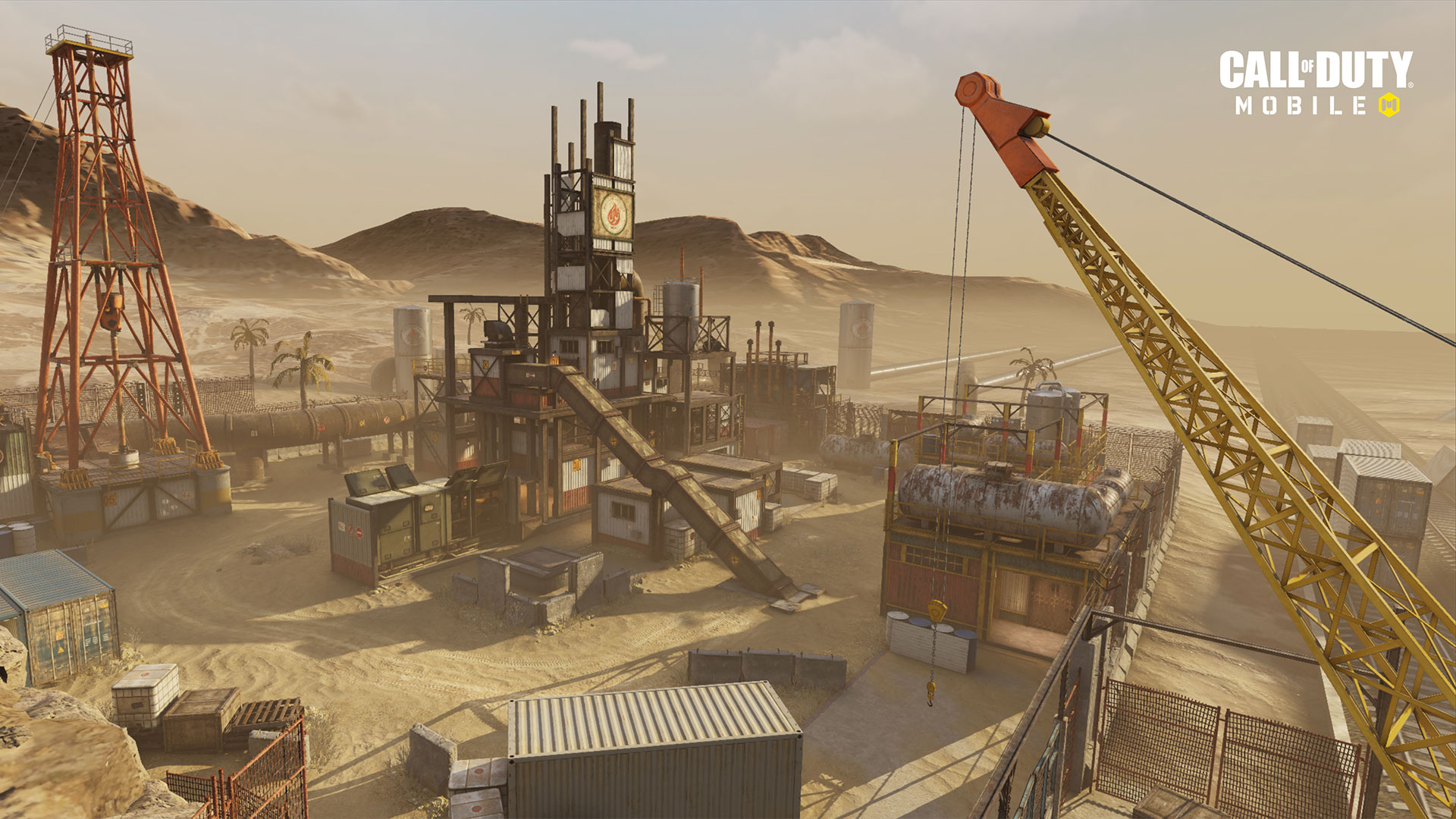 3. Snipers, don’t forget your pistol. Sharpshooters can do a lot of work from the tower and the corners of the ground floor, but you’ll have a hard time aiming at nearby enemies flanking your position. Swap to your pistol for those close-range engagements.

2. Enemy rigging the tower? Equip Engineer to reveal enemy equipment and Scorestreaks, along with an EMP tactical grenade to wipe them out in a flash.

1. As one of the most iconic maps in Call of Duty history, Rust is a treat to play in mobile form. Keep playing, keep improving, and show the enemy that there’s a new posse in town.