It’s an honor to be Armored.

With the recently revamped Division system (check out the overview here), we figured now’s a good time to dive into each Division to see what makes it extraordinary. That Division tour continues with a look at the stout, strong-armed soldiers of the Armored Division.

The Armored Division specializes in laying down cover fire and engaging the enemy at all ranges. As you rank up in the Armored, you’ll unlock a series of Division skills. Here they are:
Level I. Take significantly less explosive & fire damage
Level II. Immune to Shell Shock and Tactical Equipment
Level III. Increased bullet penetration through surfaces
Level IV. Greatly reduced flinch when shot

These skills lend themselves to a soldier who doesn’t shy away from a fight. If you’re such a soldier, or have any interest in becoming one, consider this your introduction to a new Armored Division world. 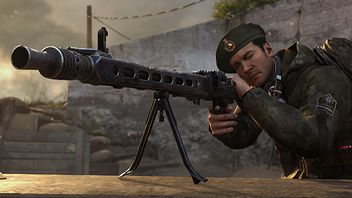 A common tactic of the savvy player is to duck for cover when you can’t return fire. Generally, this means a wall, a building, a car or whatever’s close-by. It’s common for a reason: it’s the best way to protect yourself. But, if it’s the Armored shooting at you, that cover may as well be a myth. Level III members of the Armored Division get a built-in perk of increased bullet penetration which is, in essence, the FMJ weapon attachment. This skill comes in particularly handy when enemies try to creep towards you to capture an objective – think the beach of Operation Neptune or the A-point on Shipment 1944 in Domination. Sure, your enemies may try to duck and cover for protection. But, simple cover isn’t enough when you bump up against the Armored.

Stop us if you’ve been here before: you’re capturing an objective in Domination, planting a bomb on Demolition or building a bridge on Operation Breakout. You anxiously watch as your progress creeps along until, suddenly, you see it: a grenade rolling towards your face. Move, meter resets. Don’t move, you die. This happens all the time. People just hucking grenades at the objective and you have no choice but to lay prone and take it. Not anymore, you don’t.

The Armored has the silver bullet you’ve been in search of: they take significantly less explosive damage. In any objective game mode, people will constantly spam grenades on objectives. However, the final Armored Division skill protects you from all but the most critical grenade explosions. You’ll hold objectives longer because of this skill. Not to be overshadowed, the Level II skill renders Tactical Equipment useless and protects you from Shell Shock (no more dizzies when something near you explodes.) Plus, you also take less fire damage. See the pattern? Numerous methods of attack – Lethal Equipment, Tactical Equipment, fire-related Scorestreaks and Incendiary Shotgun Shells – are all weakened when you’re in the Armored Division. 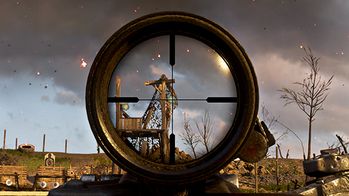 So, you’ve got good protection from grenades and fire. If there were ever a game mode that lent itself to this combination of skills, it would certainly be War Mode. In War Mode, your objectives are clear and you can predict where your enemies are coming from and where they need to go. With help from an LMG and maybe a 4X Optic, you can turn any LMG into a precise, long-range laser that’ll tear through cover with your extra bullet penetration. You’ll keep enemies from getting anywhere near objectives while defending and laying down cover for an objective assault when you’re on the attack. You can perform the overwatch work of a sniper without the precise aim required to snipe. Oh, and when it’s your turn to escort the tank or plant a bomb? Remember, you’re in the Armored now. And those grenades won’t send you running away from the objective anymore.

If macaroni and cheese taught us anything, it’s that some things just work well together. And choosing the best Basic Training to complement your Division can really put the cheese on your macaroni. Here are a couple of can’t-miss pairings to go with the Armored.

Because you can shoot through surfaces easier, Espionage is a logical pairing. You may just get some hit-markers when shooting through surfaces. However, those hits paint your enemies on the mini-map of your entire team. That way, even if you don’t land the final blow, your teammates all know who’s hiding behind what cover. Another fantastic complement to the Armored is Saboteur. This Basic Training gives you an additional piece of Lethal equipment while shortening the fuses on them. No need to try and time those Frag tosses, just cut ‘em loose and you’re in good shape. Having multiple chances to throw Lethals is also a good way to combat somebody else in the Armored Division. If the first Frag gave you hit markers, the second should take care of the job.

The Armored Division is full of the toughest soldiers. You’ll withstand explosions, fire and you’ll likely have an LMG to dish out the hurt at any distance. Once you get used to all the Division skills, you’ll wonder how you ever planted a bomb on Operation Neptune with any other Division. They’re strong. They carry heavy weapons. And grenades won’t even make ‘em flinch. Join the Armored Division.