Earned free in the Season Four Battle Pass system, the CR-56 AMAX is a worthy rival to the AK-47 due to its similar damage profile and versatility. Learn more about it, and some Gunsmith configurations, here.

The Season Four Battle Pass system not only includes the Fennec SMG, but also the CR-56 AMAX assault rifle, both available to be earned free for all players.

“This lightweight 7.69 x 39mm full auto assault rifle is compact and powerful. Built exclusively for military use, the standard issue rifle is deadly at mid-range combat and easily configured for a variety of assault tactics.” 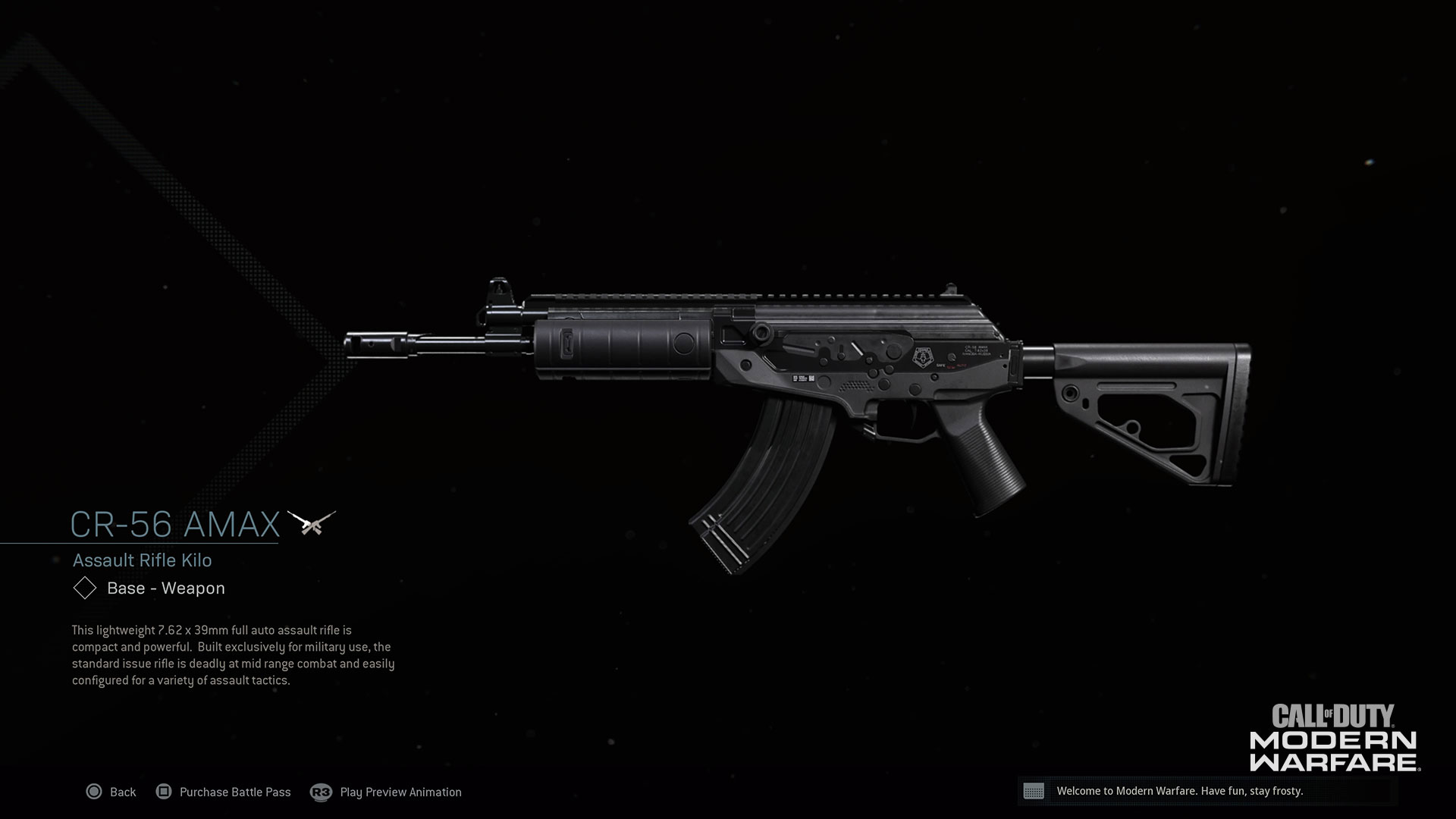 The CR-56 AMAX is in the same ballpark of heavier-hitting, slower firing assault rifles like the AK-47, but isn’t necessarily in Oden territory. Compared to the AK-47, the CR-56 sacrifices a little bit of power and range for a better fire rate and mobility.

Essentially, this weapon can down an enemy in three shots to the chest, or two to the head. And in terms of recoil, expect a vertical recoil kick similar to, the AK-47: high after the first few bullets, but overall very little side-to-side action.

First, the weapon has six stock options, which is more than any other assault rifle. If you’re looking for better aiming stability or, conversely, aim down sight (ADS) speed, you’re going to want to spend time testing all these stocks out.

Second, the M67 10-R Mags ammo conversion kit turns this weapon into a semi-auto quasi-marksman rifle. While the magazine size is small and the ammo type will be less common to find on the ground, the boosts to ADS speed and movement speed are gravy on top of a one shot kill in extreme close range, and one-shot headshots at ranges comparable to the SKS’ profile. 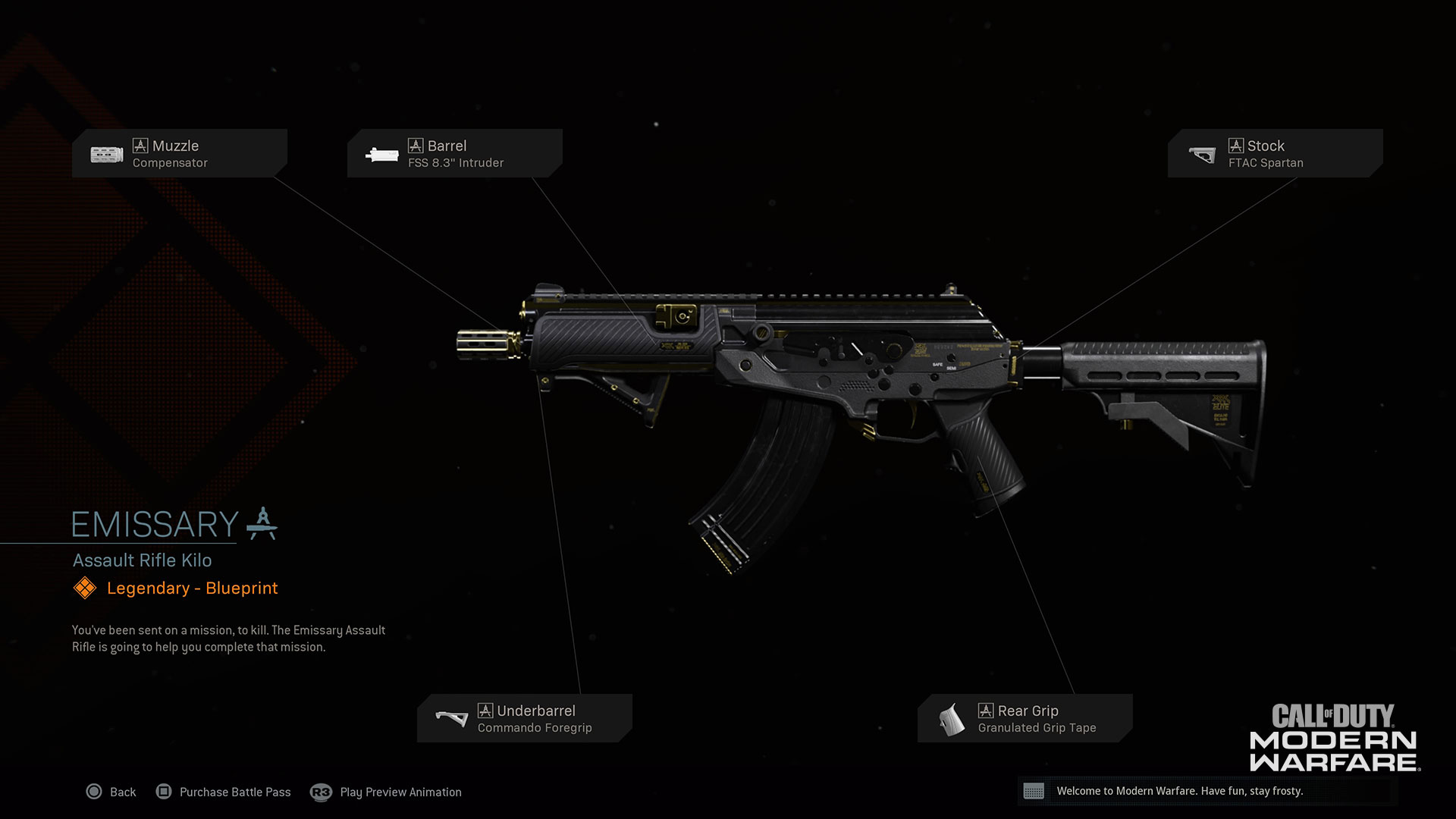 The lone attachment detractor from the control/stabilization combo of the FTAC Spartan Stock, Commando Foregrip, Granulated Grip Tape, and Compensator is one of the three available barrels for the weapon. Although it gives slight penalties to recoil control and bullet velocity – important factors for hitting and calculating arc for long-distance shots – the FSS 8.3” Intruder Barrel speeds up the weapons ADS and movement speed significantly.

As great as this assault rifle is at mid-range, you might need a close-range option, such as the Bloodlines shotgun, to deal with threats up close.

A good room clearing strategy is to check for equipment with Spotter, disabling it with a Frag if necessary. Next, throw a Snapshot Grenade in, kill identified targets with the shotgun, and follow up targets at mid-range or who enter the fray with the CR-56 AMAX.

Quick Fix will ensure immediate healing upon a takedown, so this loadout is all-around great for going door-to-door in Verdansk or going into building heavy maps in Multiplayer like the Promenade in Ground War.

This is your maximum effective range loadout: in this configuration, the CR-56 AMAX looks like it belongs in the marksman rifle category and has the stats to back it up. You also won’t have a problem maintaining aiming stability, thanks to the XRK Gatekeeper stock. Mount it on a wall or piece of cover to mitigate recoil and take out enemies at a variety of distances.

Because this weapon is for long-range combat, packing a handgun is practically a must. Consider the Azure Hammer as now both your weapons will be silenced for a stealth loadout. Pair with Cold-Blooded, Ghost, and Battle Hardened to keep you safe from the trifecta of stealth killers: thermal optics, UAVs, and Snapshot Grenades.

Throw in a Proximity Mine for defense and a Decoy Grenade for distractions, and you have yourself a great stealth DMR loadout for Warzone.

All assault rifles have a selection of underbarrel attachments that no other weapon category has -- grenade launchers and even a miniature shotgun.

For those searching for the latter, look no further than the 12-Gauge Deputy, your CQB option when that enemy is too close. With the Fully Loaded perk, come into Verdansk with max reserve ammo in Plunder… Or get some free ammo if you grab this out of a Loadout Drop. 45-Round Mags plays off the additional reserve ammo nicely, and the Thermal Hybrid is great for acquiring warm-blooded targets, even through smoke.

Because of that, we’re bringing along a thermal scoped sniper rifle for a secondary and Smoke Grenades for tactical equipment. With two primary weapons, we’ll need Amped for faster weapon swaps. Rounding out our perks is E.O.D. for defense against explosives, and completing our whole loadout is Thermite, which is superb against enemy vehicles.

For a well-balanced loadout that can handle Killstreaks, consider this configuration. The FSS 11.8” Squall Barrel and FSS Close Quarters Stock both reduce ADS speed without hurting other weapon statistics too much, while the Merc Foregrip and Rubberized Grip Tape provides the vertical recoil control this weapon needs. Top it off with a Monocle Reflex Sight and you have the definition of an assault rifle that’s ready for battle.

Out in the field, you’ll be dealing with Killstreaks, so bring along a JOKR Launcher and be Cold-Blooded to take them down with precision accuracy while remaining undetected. If no Killstreaks are around, use the JOKR to counter vehicles or a group of snipers on high ground, such as the buildings in Tavorsk District.

Then there is the Restock and Shrapnel combo: you’ll have an ample supply of Molotov Cocktails (two upon spawning in instead of one) that will delay enemy health regeneration, and those cocktails – along with Gas Grenades – will keep coming every 25 seconds after use.

These five attachments turns the CR-56 AMAX into a very small DMR with maximum movement speed while holding this weapon, one of the fastest configurations.

When using a weapon like this, consider rushing in and getting the one shot kill, then retreating. If you don’t want the Tac Laser to give you away, or you find the iron sights unsightly, swap it out for a Mini Reflex sight.

The Combat Knife is great for more stealthy takedowns and running across long safe stretches with the fastest movement speed in the game. Scavenger will resupply your M67 ammo – and whatever weapon you find on the ground if you want to pick up a new secondary – while Ghost will take you off enemy radars. For equipment, the C4 is a great aggressive tool using the early explosion method – throw it and double tap reload to explode it in mid-air and without clicking the trigger – while Stim will refresh Tactical Sprint and health.

Use this loadout with the Dead Silence Field Upgrade (charged faster by Tune Up) and with Specialist Bonus active with the perks -- Quick Fix, Double Time, and Amped -- to become a lightning-quick Operator hunter… And prepare to go into a frenzy if you unlock the Specialist Bonus.

These are only just a few ways to configure the CR-56 AMAX in the Gunsmith. Have fun with it once you unlock it and keep levelling it up to see the near-infinite possibilities it provides for your loadouts.