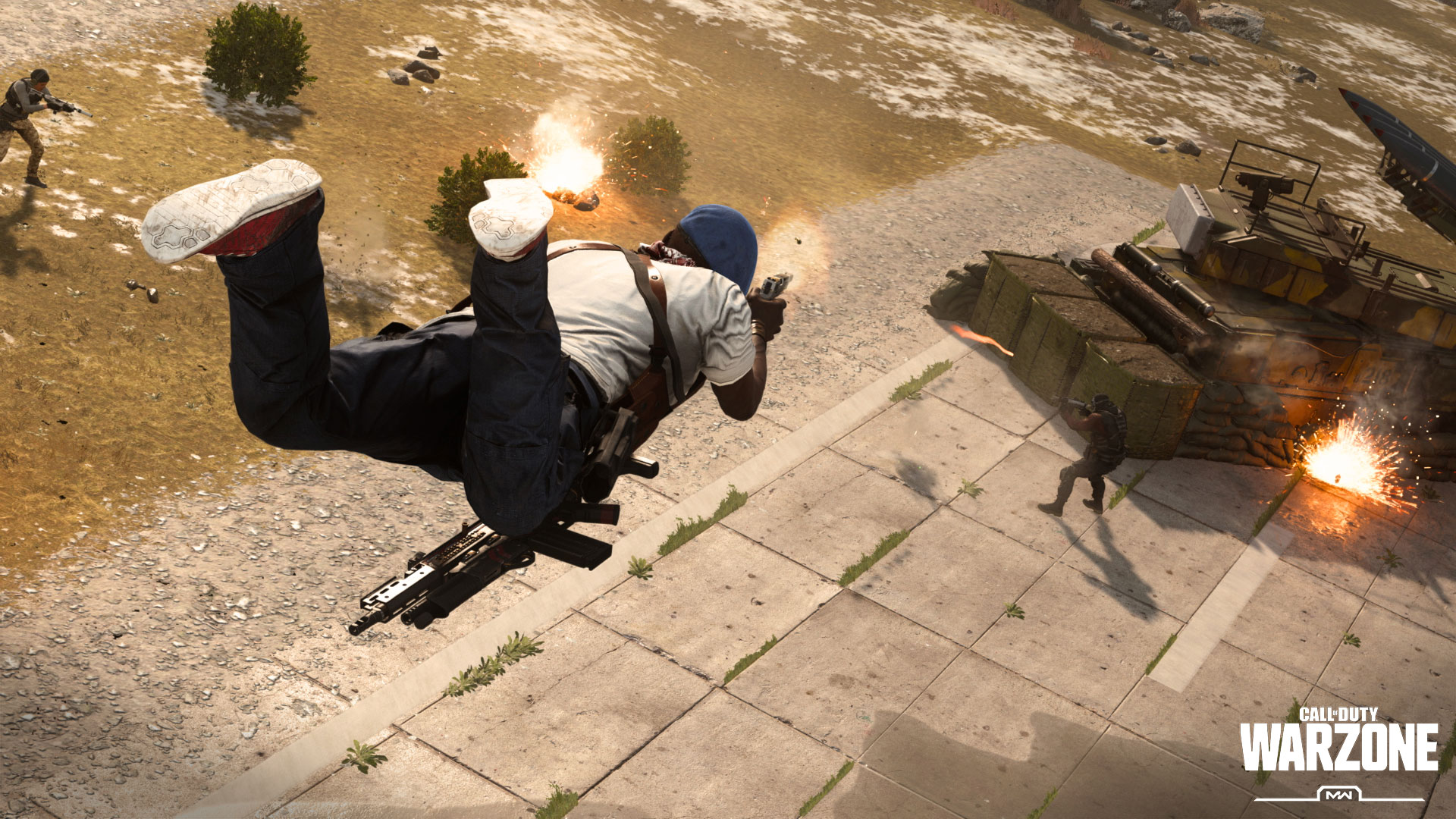 Get the drop on your enemies with tips for improving your parachuting skills, from landing strong at the start of the match to redeploying to your squad.

Get the drop on your enemies with tips for improving your parachuting skills, from landing strong at the start of the match to redeploying to your squad.

In Warzone, the road to victory starts with a good landing. Should you fly in headfirst and pull the parachute at the last second, or pull it early and scan the horizon as you glide to a smooth stop? In both Battle Royale and Plunder, the right approach to parachuting can make a world of difference to how your match plays out.

Read on for tips on mastering the parachute, including strategies for taking out enemies mid-air, landing on vehicles, and listening for callouts. 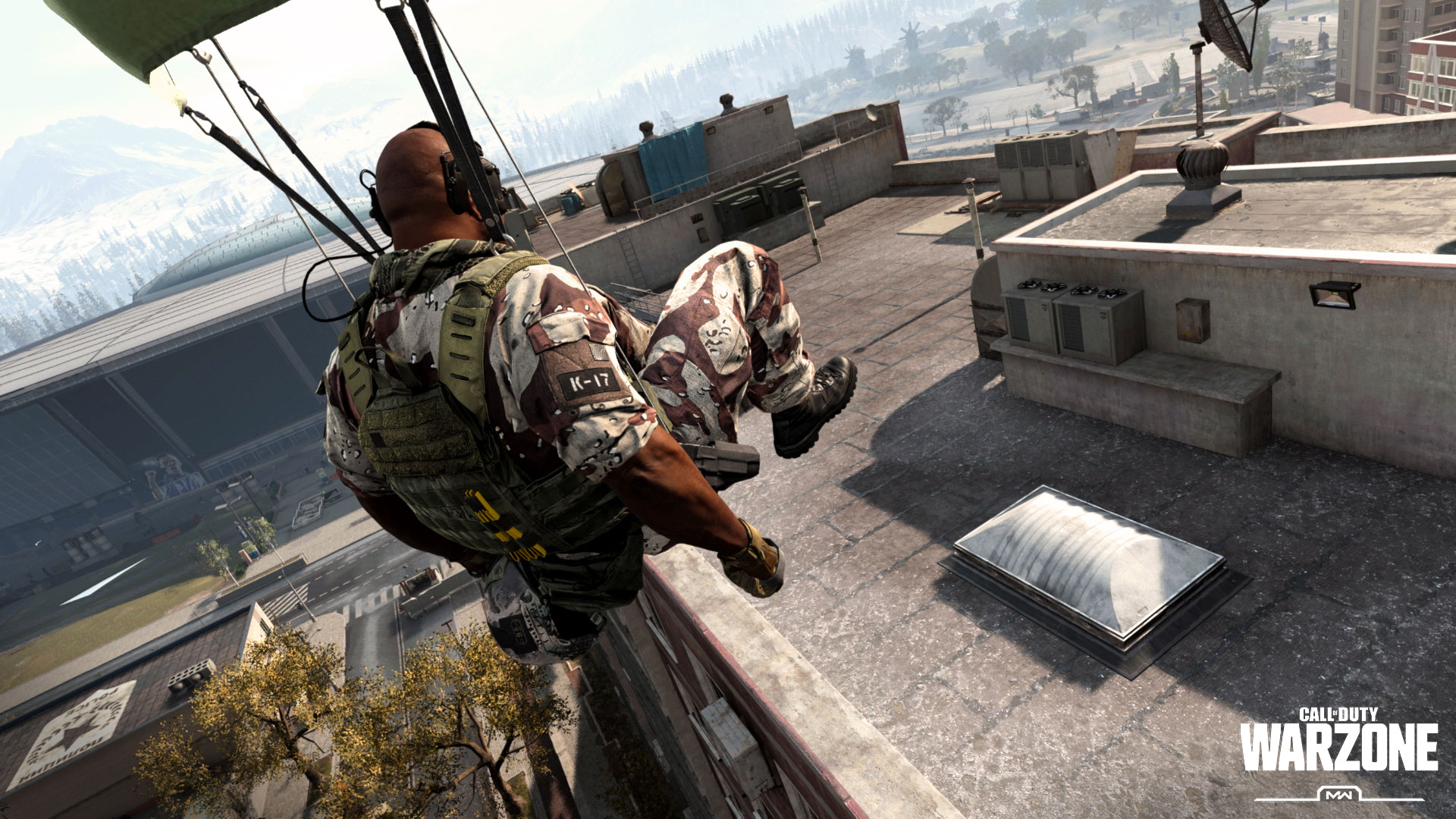 Let’s start with the basics. At the start of the match, choose your drop point and mark it on the Tac Map. When the flight trajectory nears your destination, it’s time to drop. On the right side of your HUD, an altimeter displays your distance from the ground and the speed that you’re falling.

Don’t neglect the ability to free look when your parachute is out. Unless speed is your primary concern, it’s worth gliding even for just a moment so that you can look around and see where other players are heading, or even more importantly, whether you’re being followed. 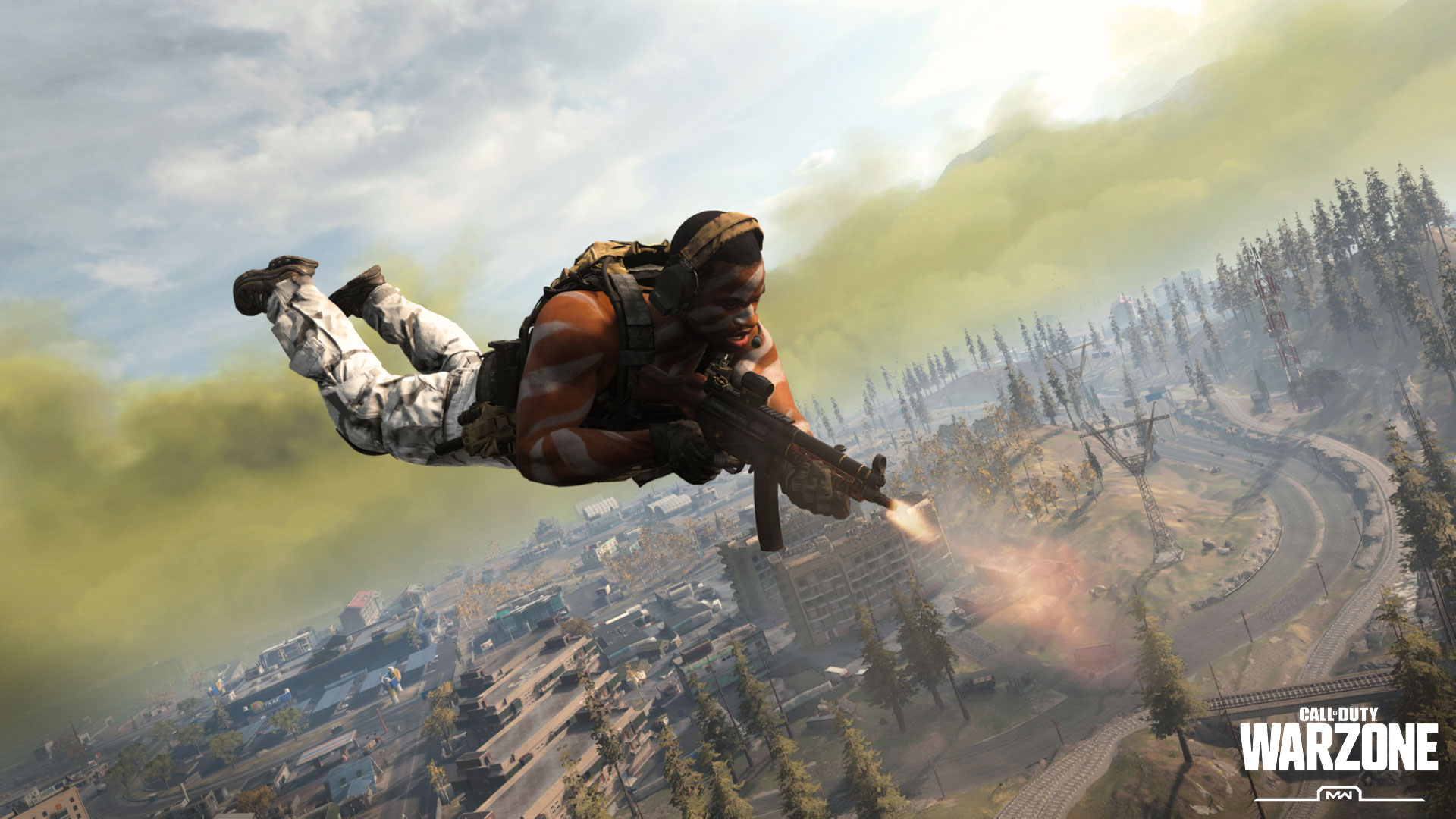 You’ll notice that players emit a smoke trail when dropping. This gives you a sense of where they are headed so that you can either steer a different way or track them from behind for an early kill. One of the coolest kills you can land in a Warzone match is a mid-air kill. After cutting the cord on your parachute, you can pull out a weapon in free-fall — your starting pistol in Battle Royale or your loadout weapons in Plunder and Blood Money — and fire away at other players.

It’s no easy task to shoot down an enemy Operator while you’re in free fall, but if you can get close enough and lead your shots properly, it’s entirely possible. To best situate yourself for an air attack, you should fly above and behind an enemy smoke trail. It’s best if they’ve pulled their parachute so they’re not moving as fast, but with good timing and precise shooting you can nab them in free-fall as well. Even if they’re free-falling with you, it’s a good idea to stay above them, so that you won’t immediately lose your target if they pull their parachute.

In Battle Royale, get as close as you can to make your pistol shots count. Switch between free-fall fire and maneuvering with your parachute out to stay on track with your target. In Plunder, you have more options. You can overwhelm your target with Season Three weapon blueprints like the Mighty Moe LMG (Tier 18) or opt for precision with the burst-fire Jerboa (Tier 21). It’s up to you to discover which weapon type suits you best for air battles. 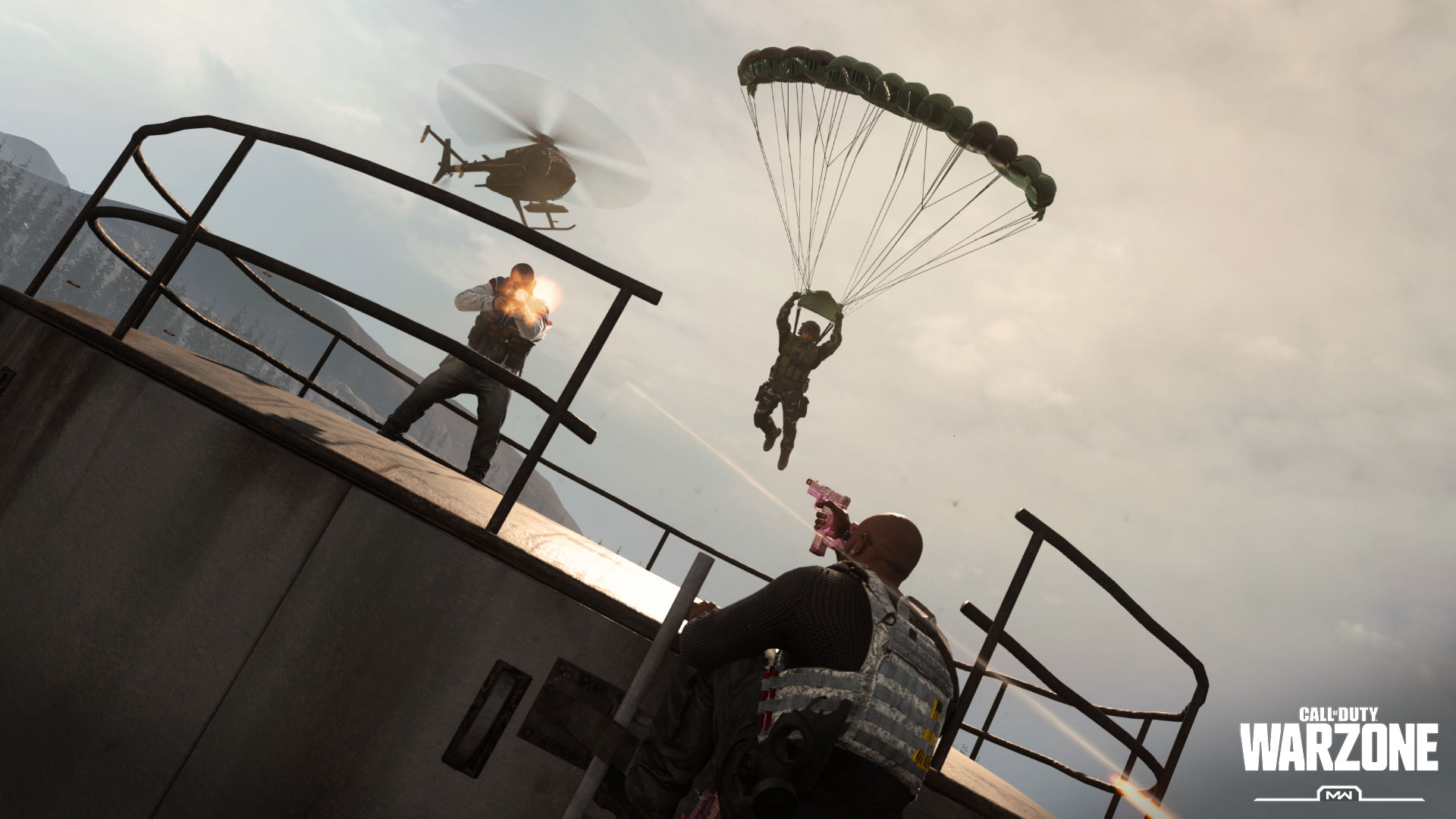 Your parachute isn’t just for dropping into Verdansk but for travelling around it as well. Jump from a high enough location and you can pull your parachute for a safe landing. Parachute off high points to reach distant Contracts or to create space between yourself and an enemy squad.

You can also use your parachute to strike against enemy Operators and squads on the ground. This is especially useful against enemies focused on another task who do not spot you first. Wait for the opportune moment when they’re not facing you and jump down to reposition behind them. If they’re particularly distracted, you and a squad mate might even get up close enough for a stealthy Finishing Move — just be ready to fire if they catch on and turn on you.

With a high jumping point and some confidence, you can use your air battle skills to shoot enemies on the ground while you’re in free-fall. This can be tricky to pull off, so have a Plan B ready — such as running into a nearby building or taking cover — in case you don’t finish them off in time. And whatever you do, don’t forget to pull the parachute before you land. 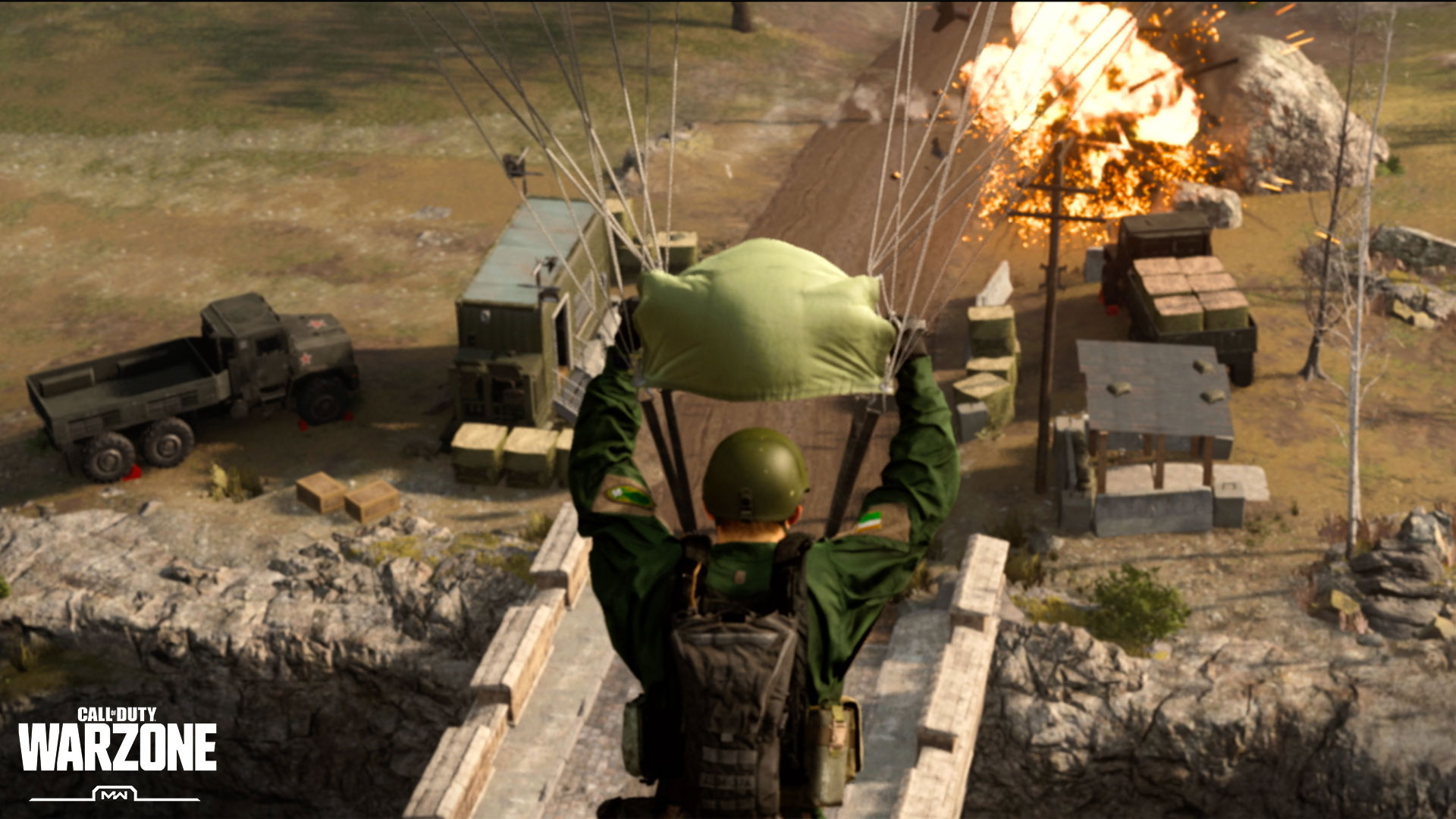 Tips for Mastering the Parachute

1.     If your parachute game needs work, play Plunder or Blood Money. Being able to respawn means you’ll have more opportunities to work on your deployment skills. Use the warmup lobby to work on air battles and air-to-ground attacks.

2.     In a team game? When you’re up high and spot enemies on open ground, consider splitting up and attacking from multiple angles. One player can open fire from up high while the others parachute down and attack from behind while the enemy is distracted.

3.     Land on a vehicle. Yes, it’s as crazy as it sounds, but entirely possible. Coordinate with your team on re-deployment to drive to your landing zone or get aggressive and plant your feet right onto an enemy Cargo Truck. It’s likely they’ll know you’re there, but you’ll have the advantage during their first moments of surprise.

4.     Be your own air-to-ground missile in Plunder. Equip a loadout with the RPG-7 and fire away at ground units. You’ll only get in one or two shots, but the blast radius inflicts serious damage. With timing and luck, you can even take out an enemy helicopter while in free-fall.

5.     Know your callouts and sounds, not so much what you will hear when dropping as what the enemy might hear when you’re coming for them. Get too close and they might hear the sounds of your parachute working. On your way down, be aware that the announcer may report your incoming presence. Always be ready for the fight.