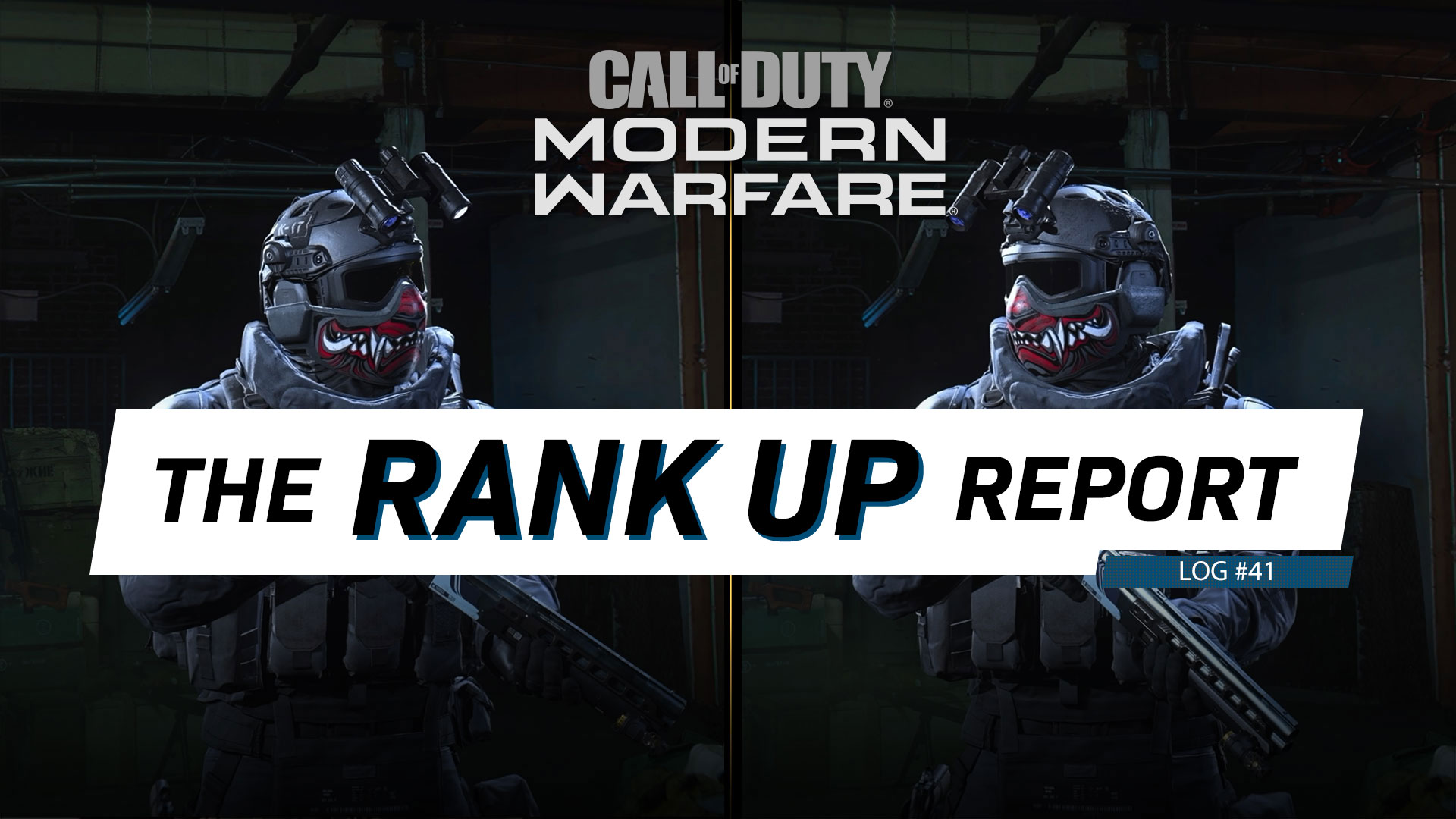 The Rank Up Report #41: A Guide to Season Five’s Officer Challenges, Part One

Rank up quicker in Call of Duty®: Modern Warfare® and Warzone™ with a (not-so) secret tip our Lead Writer has for completing multiple Officer Challenges at once.

The Rank Up Report #41: A Guide to Season Five’s Officer Challenges, Part One

Rank up quicker in Call of Duty®: Modern Warfare® and Warzone™ with a (not-so) secret tip our Lead Writer has for completing multiple Officer Challenges at once.

Season Five’s inaugural weekend seriously supercharged my ranking up, so much so that I’m well past the first 50 Officer Ranks already.

How did I do that in such little time?

Well friends, I’m prepared to share one secret technique of the Rank Up Report, so let’s get to ranking up:

Velikan is the featured Operator for the week, as he just dropped into the Store a few days back within his featured bundle. You can read all about it in this breakdown.

He’s holding our Gunsmith Custom Creation of the Week, but before we detail that micro-monster Shotgun, here’s a secret technique to ranking up: 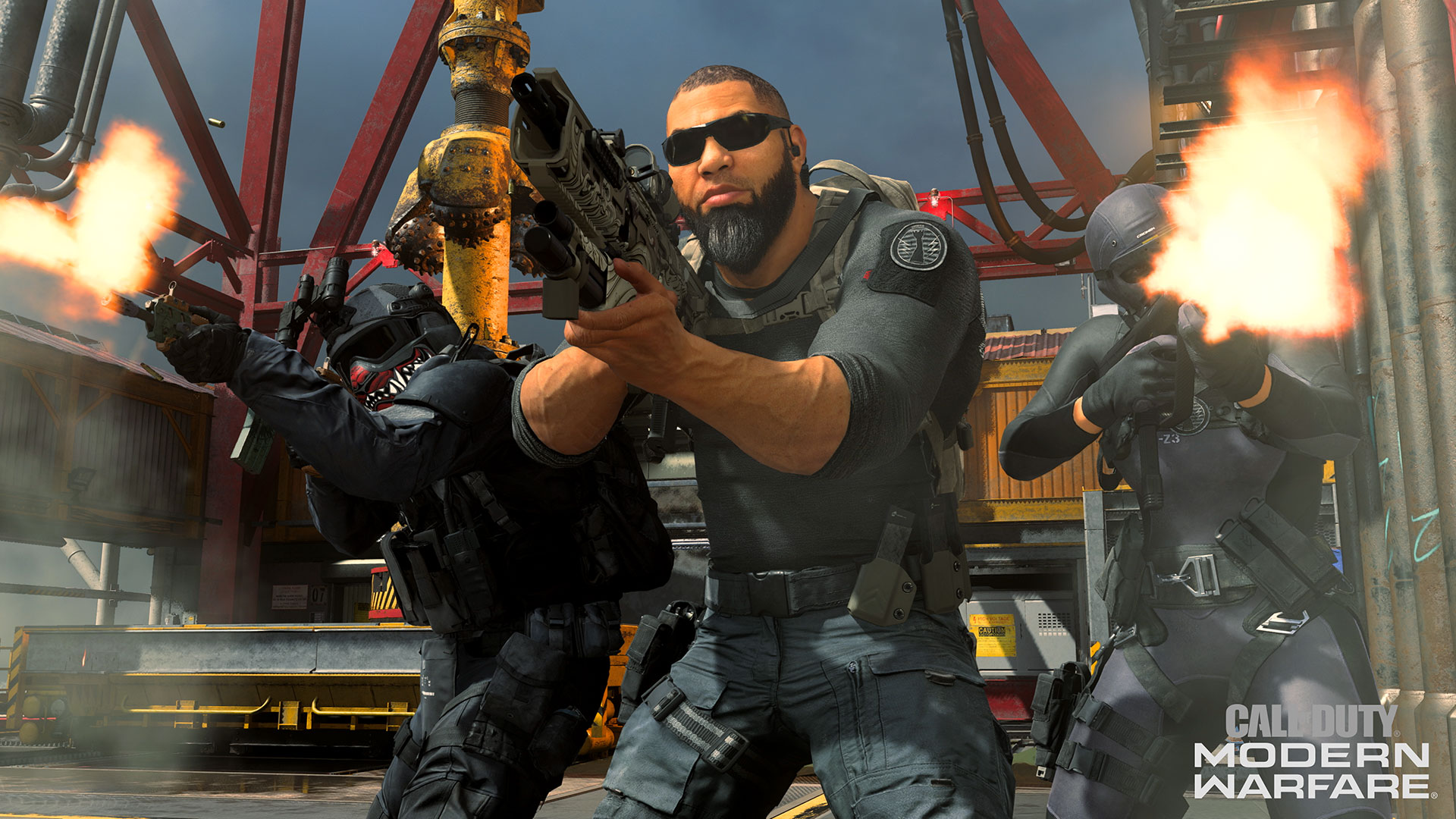 Friends, I want you to get that badass skull-centric animated emblem ASAP. Why? Because it’s badass.

Especially in early ranks, this strategy can cause your rank to skyrocket when done withinMultiplayer, or more frenetic Warzone™ modes like Warzone Mini Royale or Plunder particularly when paired with Double XP boosts.

This is one of many secrets of the Rank Up Report:

As you gain Officer Ranks, new challenges will open.

Make notes – mental or physical – on their criteria and current progress. Do this as you go, or be spoiled on future Officer Progression challenges through friends or community members.

Step 2. Combine Challenges Via Loadouts Before Dropping In

This is the most important step.

You have ten Loadouts. Personally, I divide them up so that one is open for Challenge completion, including Operator Missions, Daily Challenges and, the subject of this article, Officer Challenges.

Change it frequently after games – or even during games, with the pause menu loadout editor – as you complete challenges.

Step 3. Jump in and Play

This is all on you: have fun using the loadout you built in-game, complete your Challenges, and adjust according to progress.

With proper performance of this strategy, you would progress through MULTIPLE challenges at once. Combined with Double XP weekends or tokens, this is how I rank up quickly in Modern Warfare and Warzone. No joke. 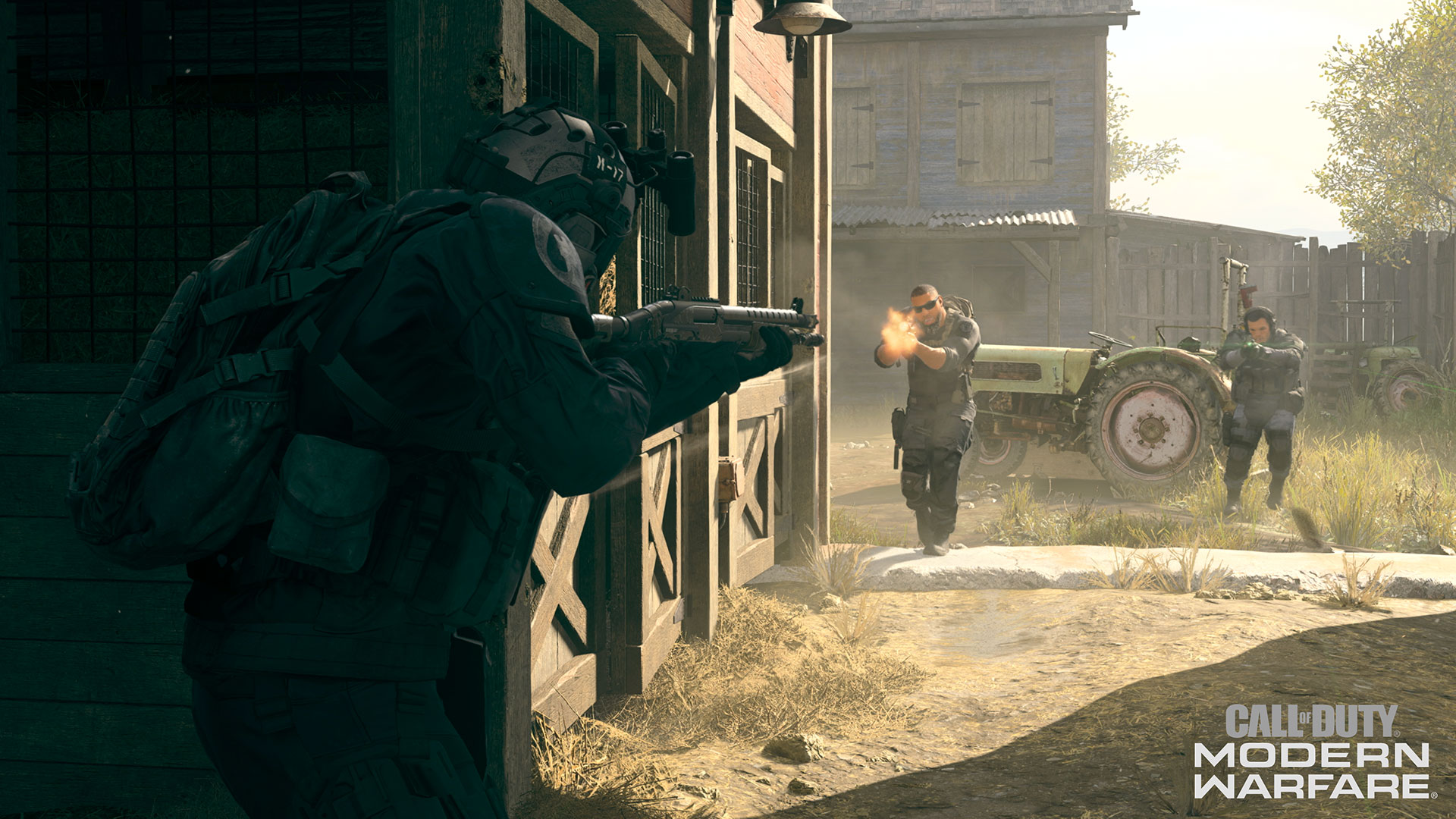 Here’s an example of how I stack challenges, starting with weapons, then attachment limits, then any additional loadout ones, including Field Upgrades and Killstreaks:

3. “Additional Loadout Ones” – Complete the loadout

Dead Silence Field Upgrade. UAV for one Killstreak – the rest are Personal Radar for additional recon, and Advanced UAV for some humility. My usual run-and-(shot)gun Perks are Quick Fix and Tracker along with Ghost. The Molotov is there to remind me I need to make progress on the Rank 109 Officer Challenge.

Remember, this is JUST a single stacking example, as there are numerous objectives to stack, including Operator Missions, regular Missions, and Daily and Weekly Challenges. And as I complete individual challenges, I change this loadout to fit other ones.

The Shadow Company does not play by “typical rules of engagement,” as we’ve all seen at the beginning of Season Five.

When I’m going for challenge completion, I don’t either… Or at least, I go against “popular” loadout choices. 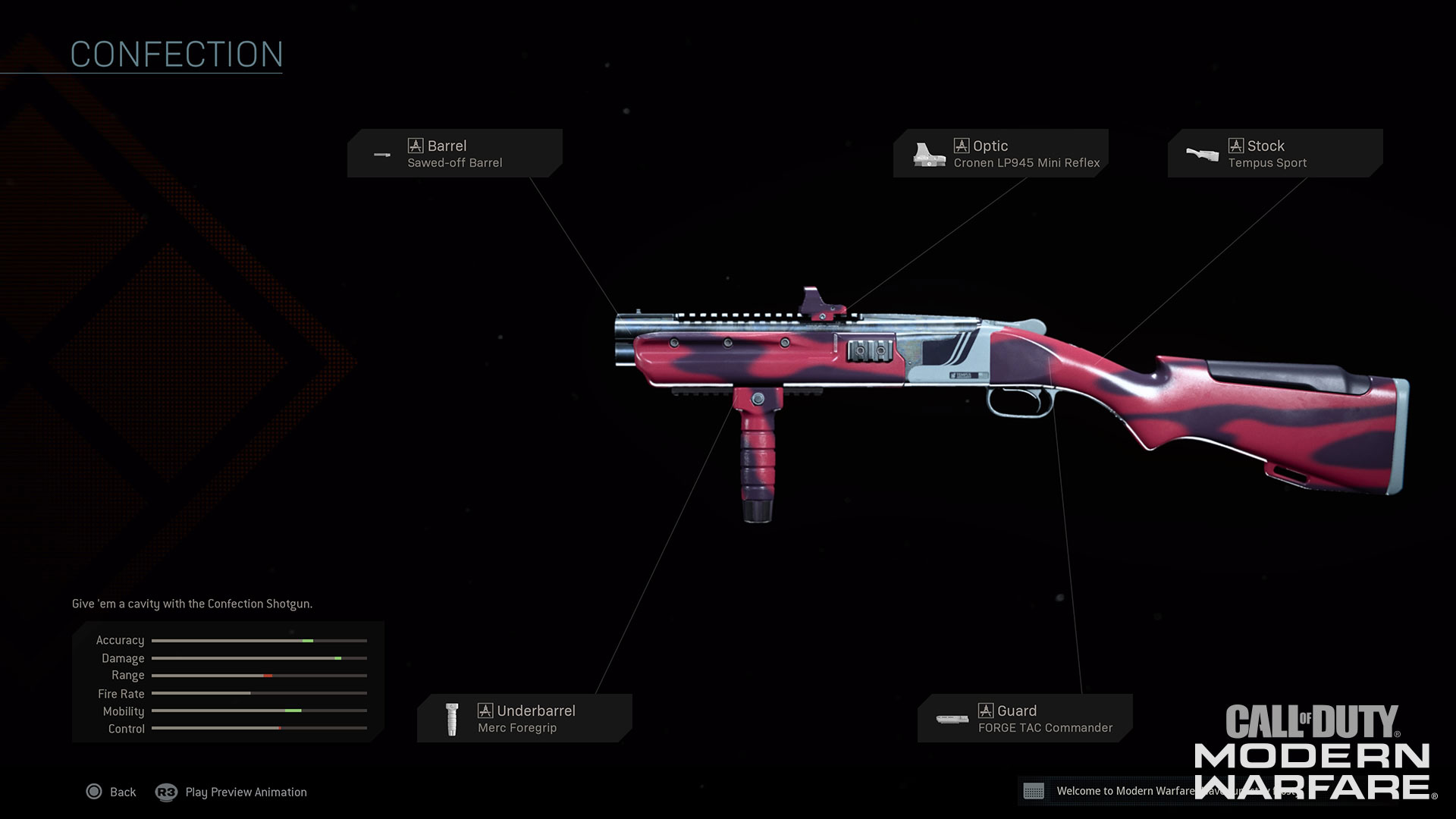 Looks sweet, right? Well, this double-barreled shotgun dishes out two bitter pills for unlucky enemies. Because of that, I’m calling my Gunsmith Custom Creation for the week “Bittersweet.” 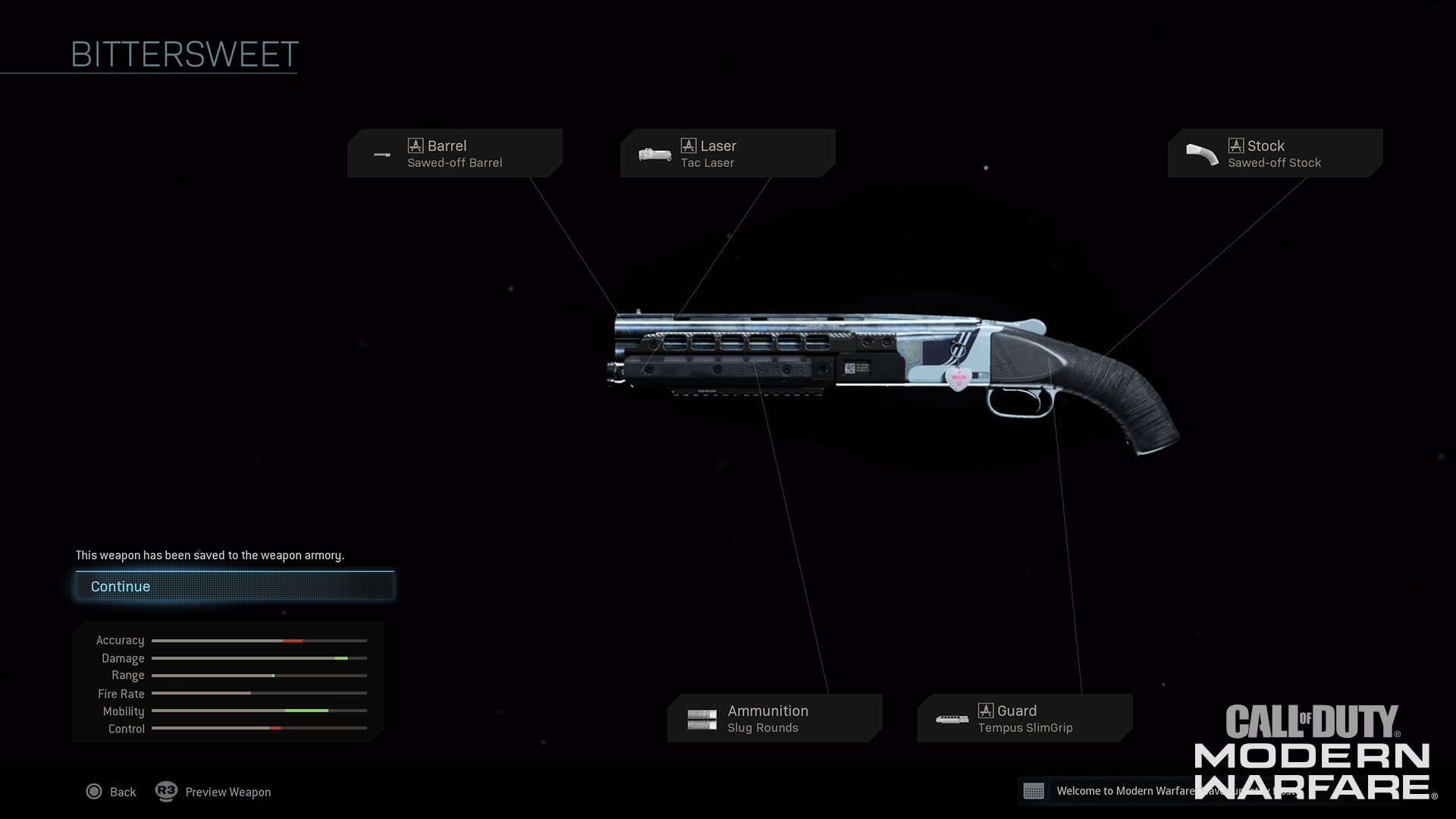 I kept the blueprint’s Sawed-Off Stock. The Sawed-Off Stock and Tempus SlimGrip appearance is from the CQBoom blueprint (Season Two “Close Quarters” bundle). The Tac Laser (not visible in image) can also be found on the Muskeg blueprint (Earned by completing the “Proactive Assault” Multiplayer Mission Set). The Slug Round’s cosmetic appearance doesn’t matter.

I choose most of my attachments to maximize movement and sprint to fire speed and included some surprises.

Slug Rounds takes buckshot round (standard ammo) spread out of the equation. At the cost of removing the “safety net” for accuracy, it provides the ability “snipe” with a shotgun across dozens of meters, a range that buckshot ammo can’t do so consistently.

When using Slug Rounds, aiming down sight (ADS) with your shotgun maximizes its accuracy. In summary, this blueprint is a two-shot wonder that gives both incredible mobility and one-shot kill potential to an Operator who can handle it.

In fact, I built this weapon for the Officer Challenge-stacking loadout, and now it’s part of my standard primary weapon rotation. Although it’s great, be sure to switch to a secondary if you don’t have time to reload, or you may be caught without a means of defense.

Some may call this blueprint dirty, but I call it maximizing rank up potential. Go out and rank up, no matter what it takes, and I’ll see you online.