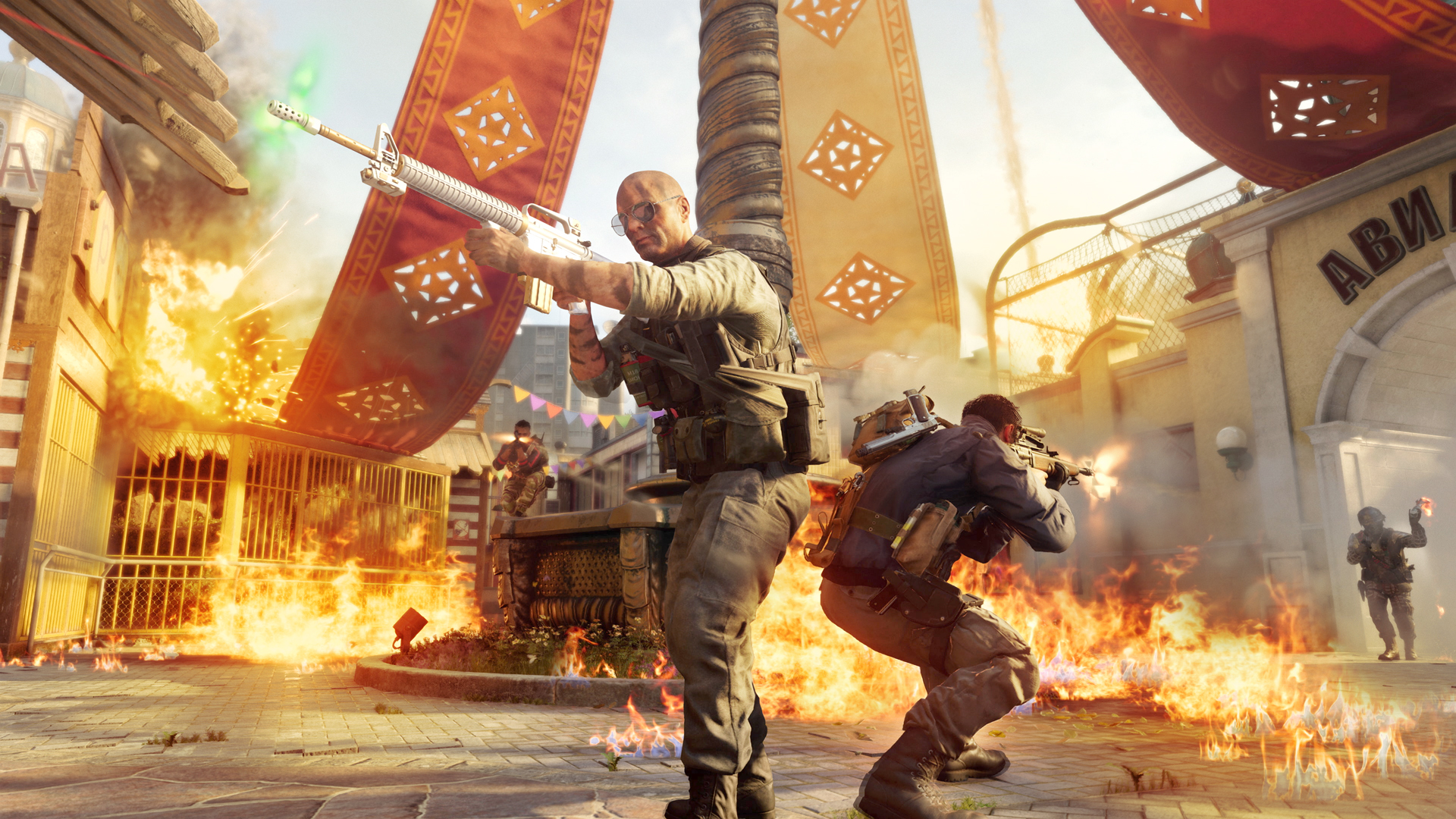 In Multiplayer, we’re delivering the Zoo 6v6 map and Demolition mode on Day One, plus new MP event challenges later in the season. You’ll also be able to spend your hard-earned Prestige Keys on the new “Hidden Terror” Sniper Weapon Blueprint at the Prestige Shop, as well as additional Animated Calling Cards from previous Call of Duty games to show off in-game.

Zombies players will get access to the new Rampage Inducer in round-based maps to immediately turn up the action to epic levels, and in Outbreak, we’re delivering the new Armada Region and Black Chest World Event, as well as new narrative Intel to set the stage for the finale of Black Ops Cold War Zombies in next season’s round-based map. We’ll also have new event challenges for Zombies, Dead Ops Arcade 3 updates, and the new “Diminishing Light” limited-time mode and Drive-In map with new Intel for Onslaught players on PlayStation®.

Starting Sept. 21st, get ready for The Numbers Event in Black Ops Cold War and Warzone, packed with two new sets of challenges across both games and 19 rewards to unlock, including the dual-wield Sai – our first-ever weapon event reward! – for completing a full set in either game. The hardcore Survival limited-time mode will also come to Outbreak during the event, where there’s no mini-map or overhead map to rely on, and you’ll have to scavenge for food to regain health.

Check out the roadmap and get all the details on what’s coming in Season Five Reloaded at the Call of Duty Blog, and watch for more intel later next week on the Treyarch blog, complete with patch notes for Black Ops Cold War. 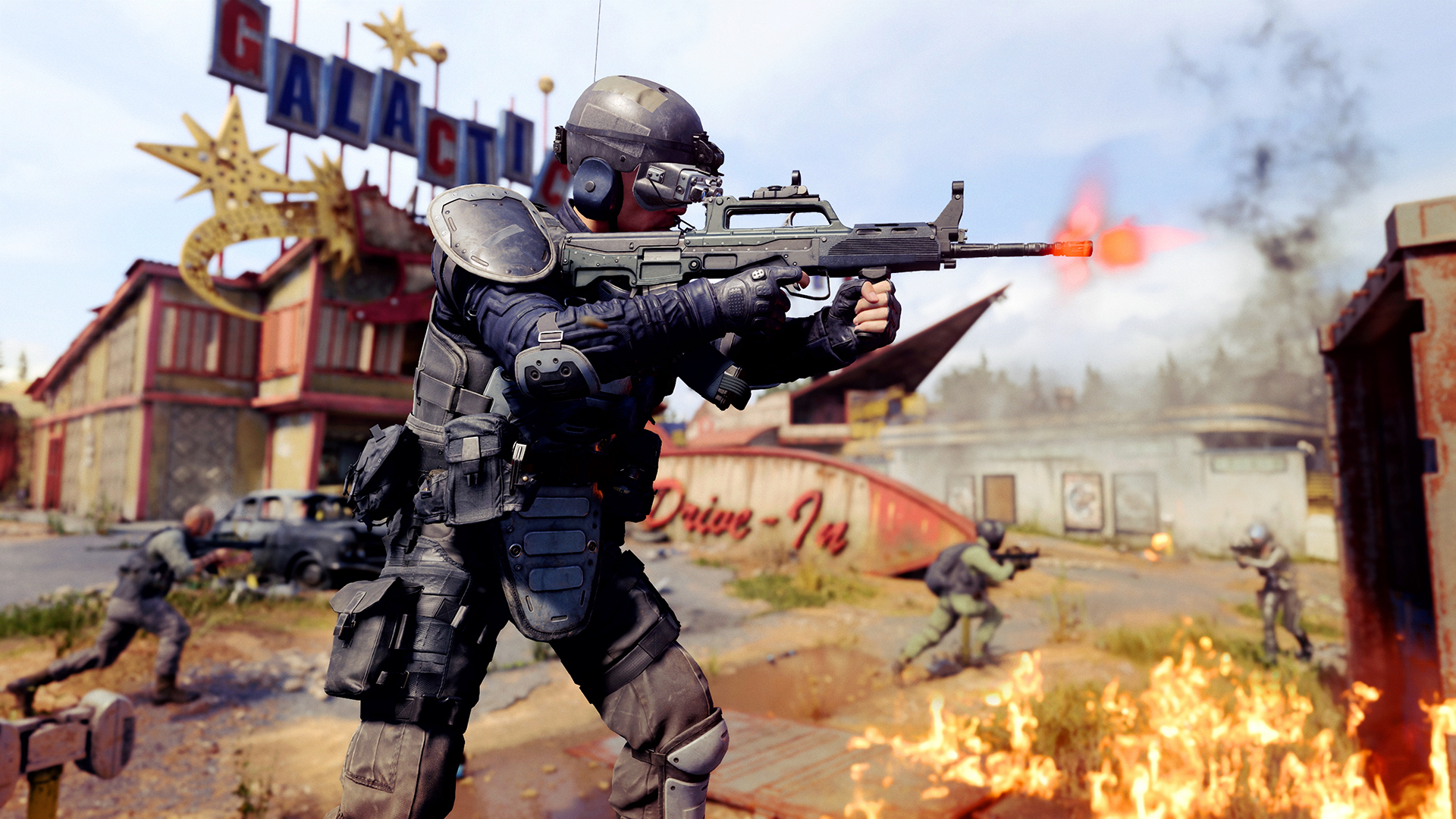 Before we transition into Season Five Reloaded, we’ve got a packed week for Multiplayer with the new Season Five Moshpit featuring 6v6 respawn modes on Echelon, Slums, and Drive-In; a fresh Gunfight Tournament with all-new rewards, featuring the new Showroom map; the updated Throwback Moshpit with Slums and Drive-In added to the mix; and a second week of the tactical Double Agent: Melee mode. As usual, 12v12 Moshpit and Hardcore 12v12 Moshpit are also available via Quick Play.

Today’s update also includes new weapon tuning for the TEC-9, EM2, and PPSh-41. If you’ve been getting lit up by the full-auto version of the TEC-9 a little too often lately, no worries – we’ve reduced the damage for the Full-Auto Repeater Muzzle attachment by 18%, from 50 to 41 per shot. On the EM2 assault rifle, the 25.8” Task Force Barrel attachment now reduces the weapon’s fire rate by 7% as an additional tradeoff, and the PPSh-41 gets an upgrade for the 15.7” Task Force Barrel (damage increased from 4% to 7%) and the Spetsnaz Field Grip Handle (ADS time bonus increased from 15% to 18%).

So level up those weapons and get ready to jump into this week’s new playlists with your friends, because your last chance to get Free Access starts now. 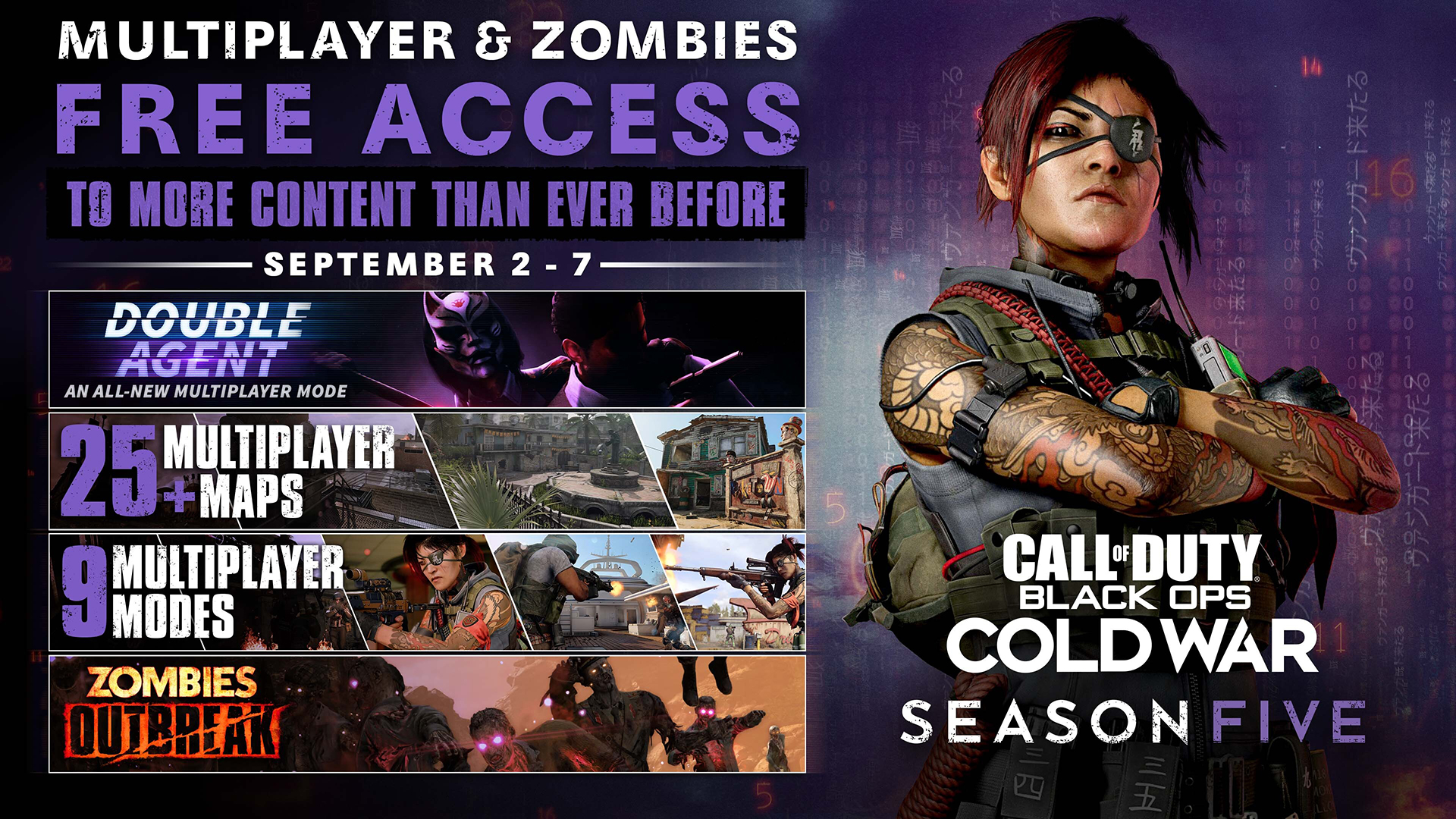 Starting today through September 7, everyone can download Black Ops Cold War Free Access and play over 25 Multiplayer maps and Outbreak in Zombies for free, in addition to Zombies Onslaught on PlayStation®. And for the first time, Free Access players will be able to participate in the latest Gunfight Tournament for the chance to unlock all-new rewards for making it through the full bracket!

Tell your friends and download Free Access from your platform’s store today. And whether you’re a free player or you’ve been here since the start, you’ll be leveling up twice as fast this weekend...

Drop in during the long holiday weekend with an extended run of 2XP in Black Ops Cold War, starting 10AM PT tomorrow through Tuesday, Sept. 7! Season Five Reloaded is nearly here, so if you haven’t reached Prestige Master yet, there’s never been a better time than now. Go get it.