Dead Ops Arcade is Back!

The third installment of the top-down shooter is here in Black Ops Cold War Zombies.

In addition to launching “Die Maschine,” introducing the Dark Aether story along with a new cast of characters, and delivering an all-new gameplay experience with Black Ops Cold War Zombies, the team decided to go the extra mile to deliver another special treat for Zombies fans this year at launch: Dead Ops Arcade 3 – Rise of the Mamaback.

We know just how much Zombies fans have enjoyed this co-op, chicken-filled arcade shooter series since its debut in the original Black Ops, and we’re proud to bring the third installment to life in 2020 with plenty of new surprises. To celebrate the legacy of Dead Ops Arcade, we caught up with Treyarch’s Chief Technology Officer and DOA visionary David King to dive into the everything that’s made the series so special over the years.

What started out as a fun little side project-turned-hidden mode has evolved into one of our favorite traditions of the Black Ops series, and the ultimate internal passion project – other than the birth of actual Zombies back in World at War, of course. Let’s reminisce on how it all started. 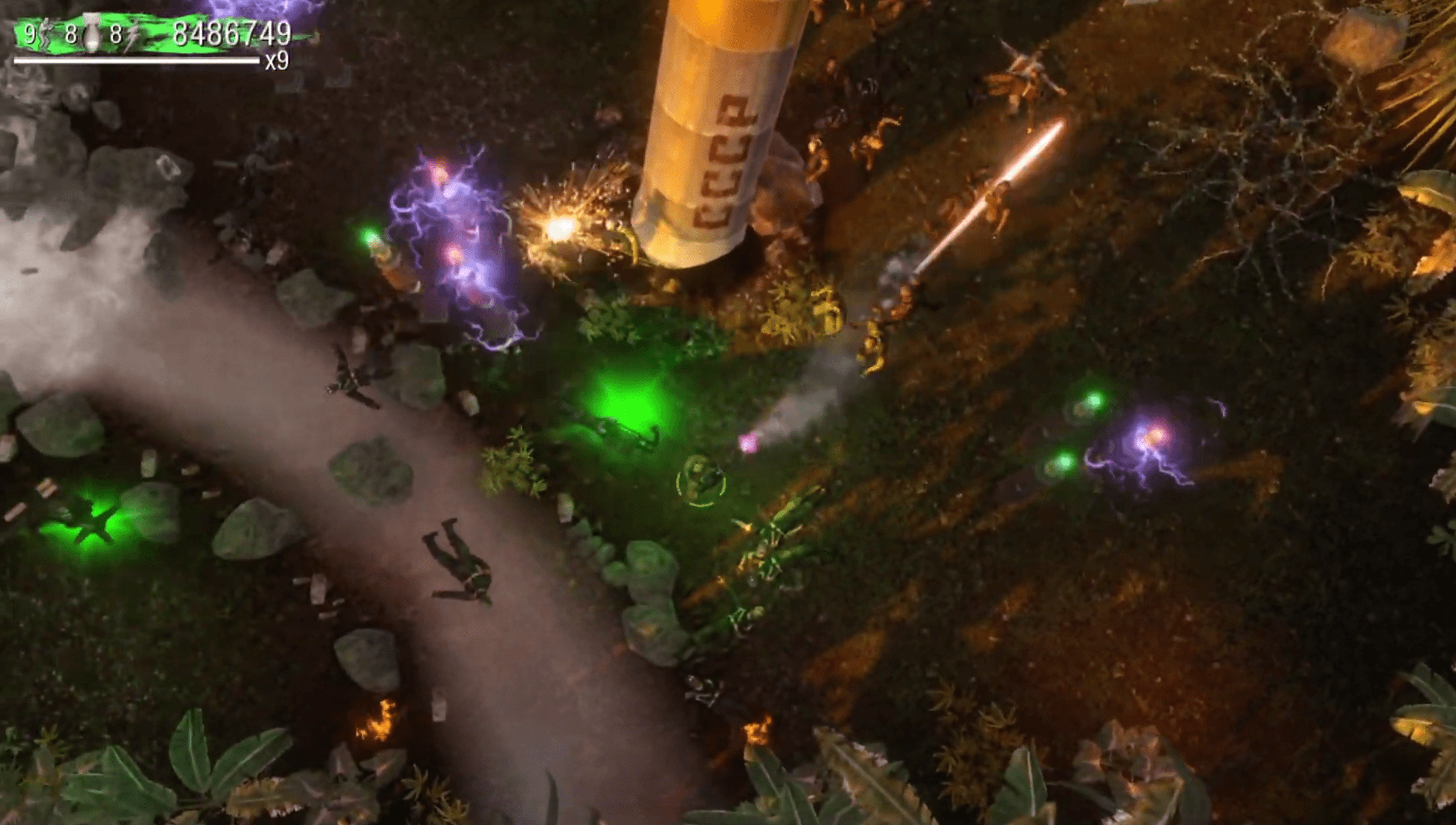 The series found its origins in 2010, when fans discovered they could break free from the interrogation chair at the Black Ops main menu as Alex Mason and access a CIA data system terminal. By typing “DOA” into the terminal, players could add a secret new minigame to the list of Black Ops Zombies maps that would quickly become a favorite with fans around the world.

“Dead Ops Arcade was inspired by the type of games that I used to enjoy during my childhood in the ‘80s. The mode started off as a simple homage to classic arcade games, and things just kept getting wilder from there. The dedication that our fans continue to show to DOA inspires us to keep pushing this mode into new places.” – David King, Chief Technology Officer

In the first Dead Ops Arcade, players squared off against the Cosmic Silverback, a mutant gorilla that escaped from the Black Ops Zombies map, “Ascension.” With just three lives and unlimited ammo, players had to make their way through each level taking out hordes of zombies while picking up weapons, treasure, and power-ups along the way. With co-op support built in, friends could squad up and night after night to take on the Silverback and see how long they could last.

In Black Ops 3, the next installment of DOA unfolded as Cyber, the brother of Cosmic, fought back against his brother's slayer in Dead Ops Arcade 2: Cyber’s Avengening. Upping the ante over its predecessor, Dead Ops Arcade 2 brought plenty of new additions to the series in 2015.

Players were now able to jump into first-person for an extended period for the first time, access a new arsenal of weapons from Black Ops 3, and wield new Scorestreaks, Specialist weapons, vehicles, and power-ups. As the years went by, fans began to wonder when they’d get their hands on a sequel. 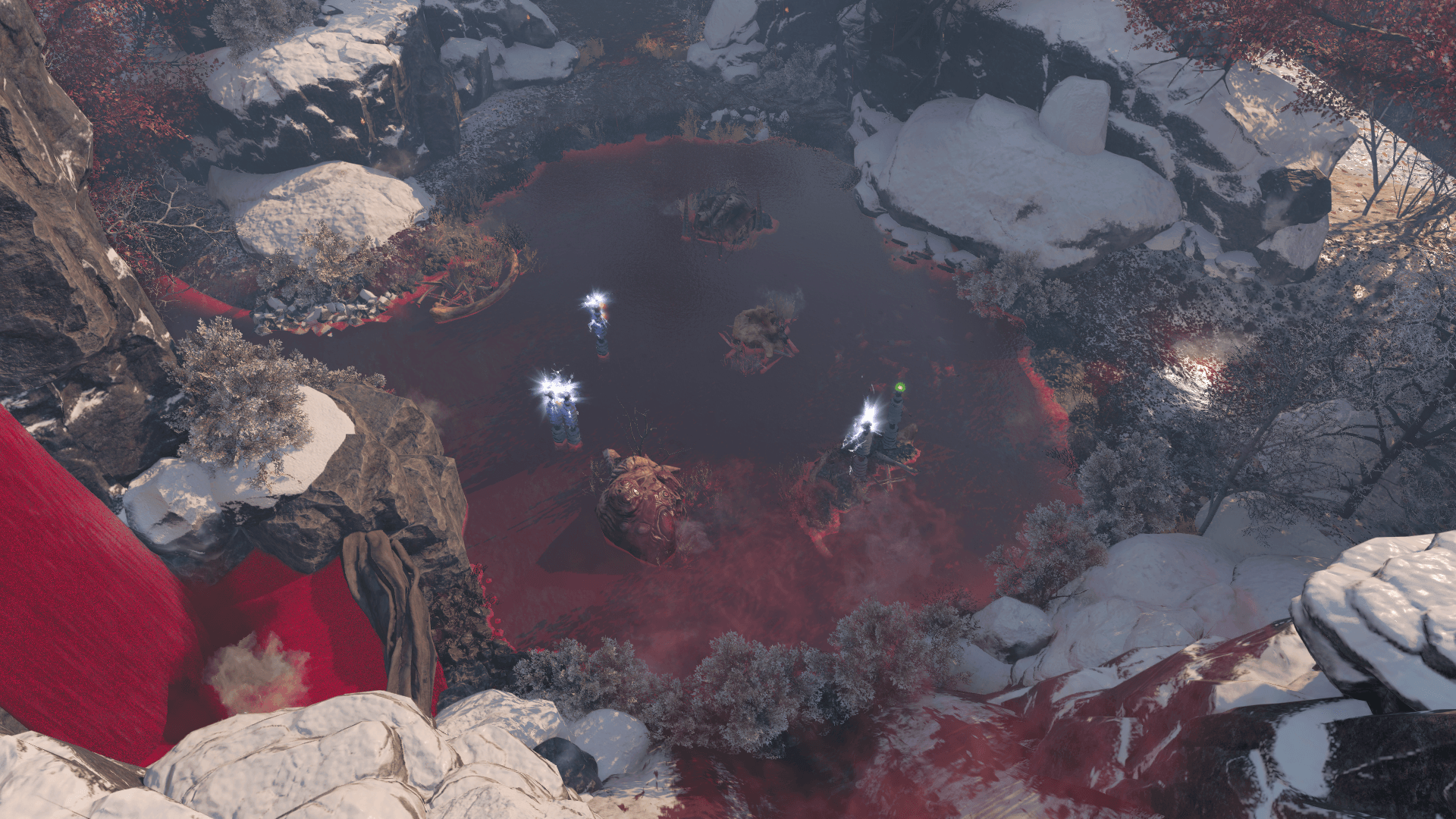 In 2020, that day arrived with the launch of Black Ops Cold War. With the Silverback brothers defeated, players now face their biggest foe yet: the mother of Cosmic and Cyber known as the Mamaback!

In addition to crazier challenges, new Arenas, a wild new boss to conquer, and much more to discover, DOA 3 features an original soundtrack composed by members of Treyarch’s incredible audio team: James McCawley, Brian Tuey, Kevin Sherwood, and Shawn Jimmerson – of all whom have lent their talents to Zombies over the years.

“What started as a surprise game mode has turned into quite the passion project for our audio team. DOA’s silly vibe allows us to write all kinds of different music that normally wouldn’t work together. Some of it is 8-bit inspired, some of it is inspired by ‘90s trance music, and a few came from another planet... but it all works together to create a super-fun environment. The best part is, if someone has a song idea, they can write it and we’re able to fit it in. This has given the mode a ton of variety and some really interesting tracks that wouldn’t exist otherwise.” - Brian Tuey, Audio Director

To really make things interesting this time around, DOA 3 introduces randomly generated Dungeons. Found in The Wild (more on that below), players can trigger new, ever-changing Dungeons filled with nasty traps and lucrative rewards. While these can be difficult to navigate and change every time they’re generated, the rewards just might outweigh the risk if you can make it out alive. 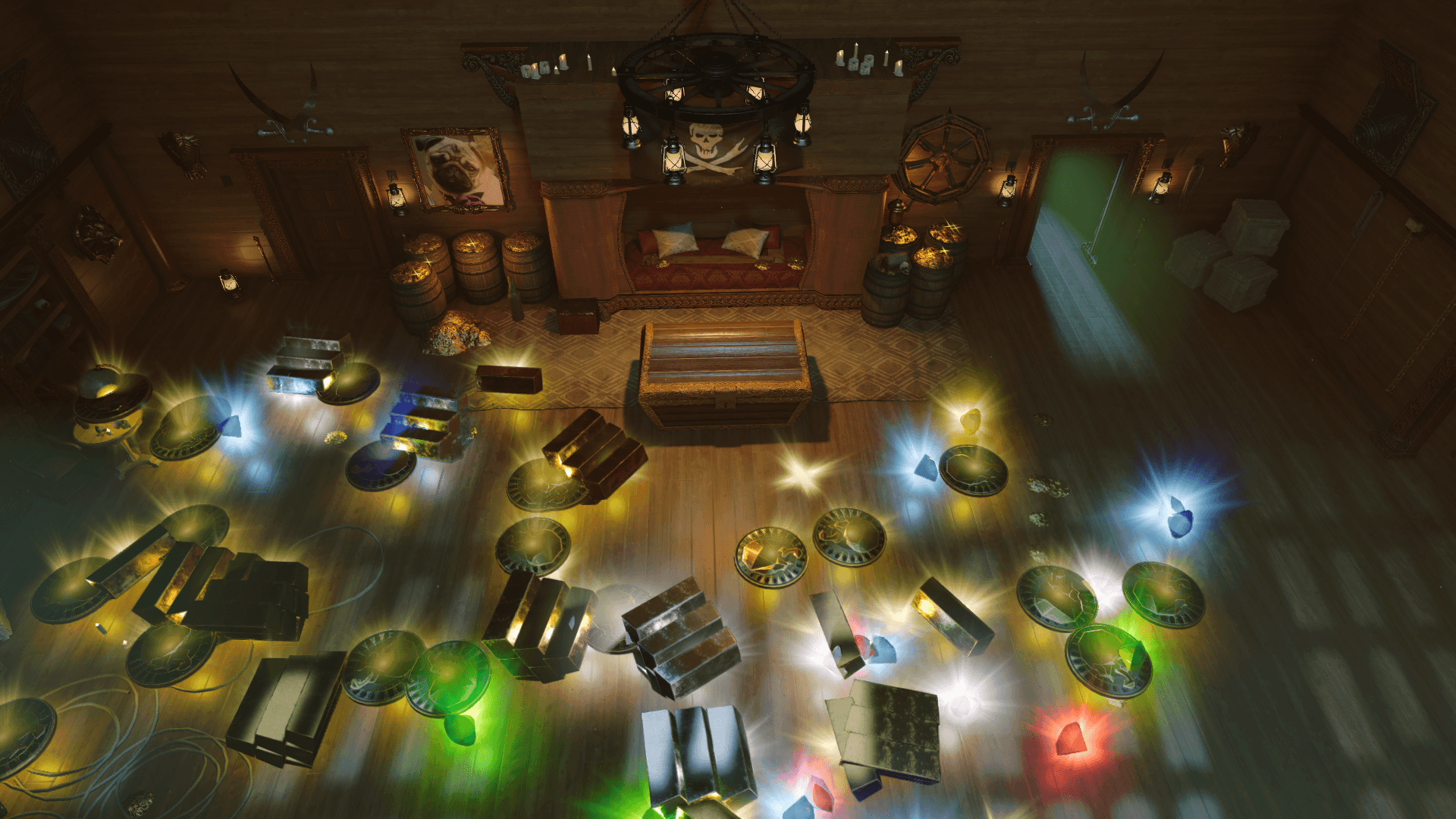 The next time you’re exploring a Dungeon, keep an eye out for a Fate Rock. Finding these will allow you to gain the benefit of multiple Fates and become super-powerful. Experiment with different combinations of Fates and see which ones work best for you!

Completely new to DOA 3 is The Wild: a top-scrolling adventure where players have more freedom to explore a wide-open space. Accessed through a portal that presents itself at key points in the game during between Arenas, The Wild allows players to find valuable items and treasure. Even larger areas can be unlocked for exploration, if you have the right key when you come across locked barriers.

"The Wild offers players freedom outside of the classic Arenas that we’ve come to love. It was a great learning experience for the DOA 3 team, bringing back nostalgic memories while creating a new journey for players to enjoy with their friends. Being a huge DOA fan myself, it was an honor to come on board and help to deliver a new experience to our players!" – Jennifer Chamorro, Level Designer

The Wild is also where you’ll find randomly generated Dungeons we mentioned above, which bring their own dangers and rewards. You’ll need to successfully escape The Wild to pick up one of the trophies exclusive to Dead Ops Arcade 3, so make sure you’re prepared before stepping into the unknown. 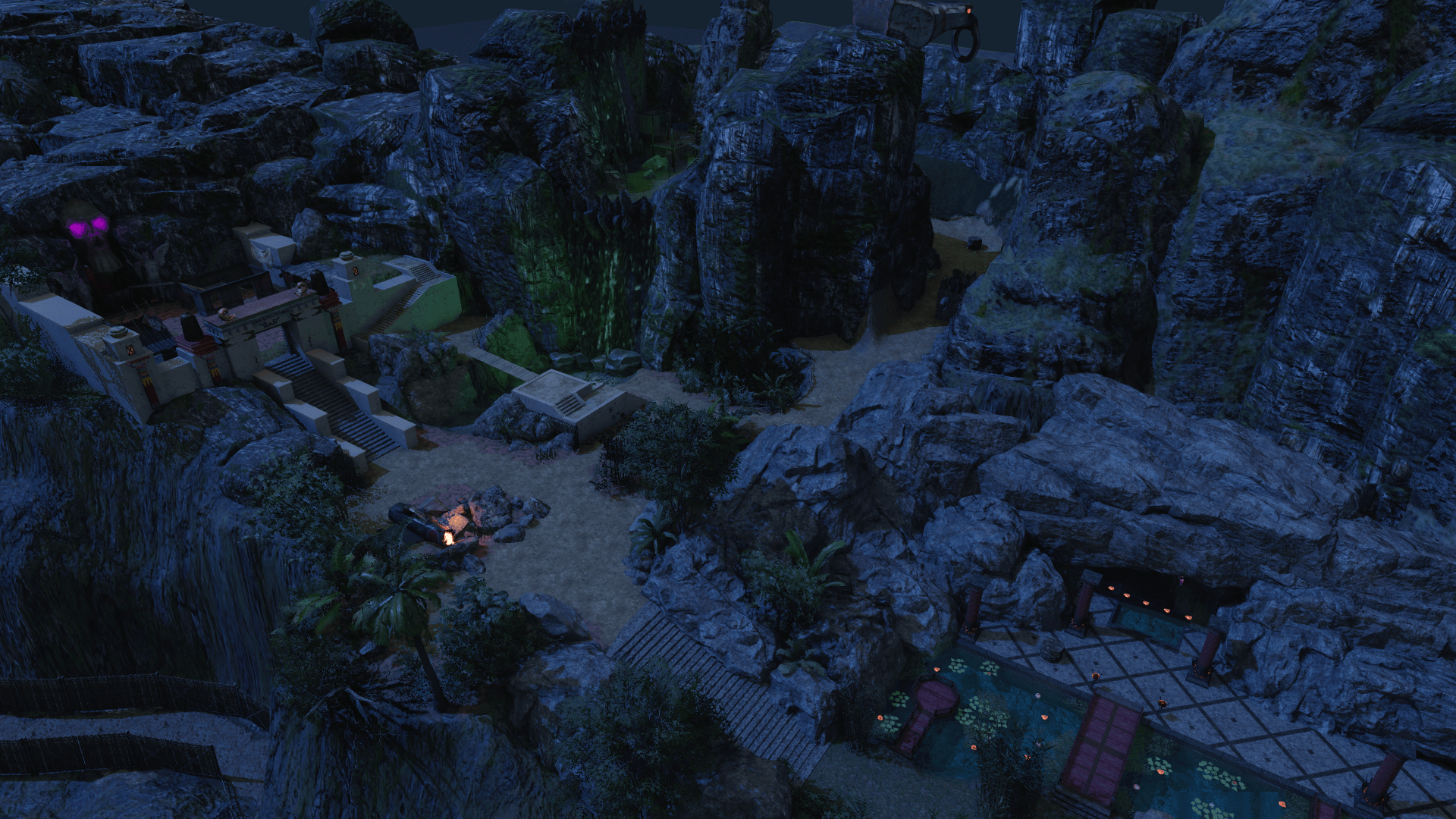 Once you reach the last round of the final Arena, it’s time to face the ultimate boss: the Mamaback. You’ll need every trick in the book and a killer combination of Fates to survive to the end, but if you do, you’ll earn in-game rewards and the bragging rights that come along with them. Speaking of which...

We’ve also included 14 Dead Ops Arcade Calling Cards to earn in the Silverback Expedition and Gorilla Stalker categories of the Zombies Challenges in the Barracks. Completing each set also gets you an animated Master Calling Card to show off in-game!

From its humble beginnings as an Easter Egg in 2010’s Black Ops, we truly had no idea how much Dead Ops Arcade would resonate with Zombies fans. From the entire team, thank you for playing DOA for over a decade! Until next time...