This Map Snapshot looks at Tunisia, a new Multiplayer map that takes the fight to the open square and narrow alleyways of a seaside Mediterranean town.

Gear up — we’re headed for Tunisia. This new Multiplayer map for Call of Duty: Mobile sets the stage of battle in an idyllic Mediterranean town. Don’t think that means you’re on vacation though, because the fight is just getting started.

Read on for an in-depth map overview of Tunisia; plus, strategies and tips for beating the opposition when you get there. 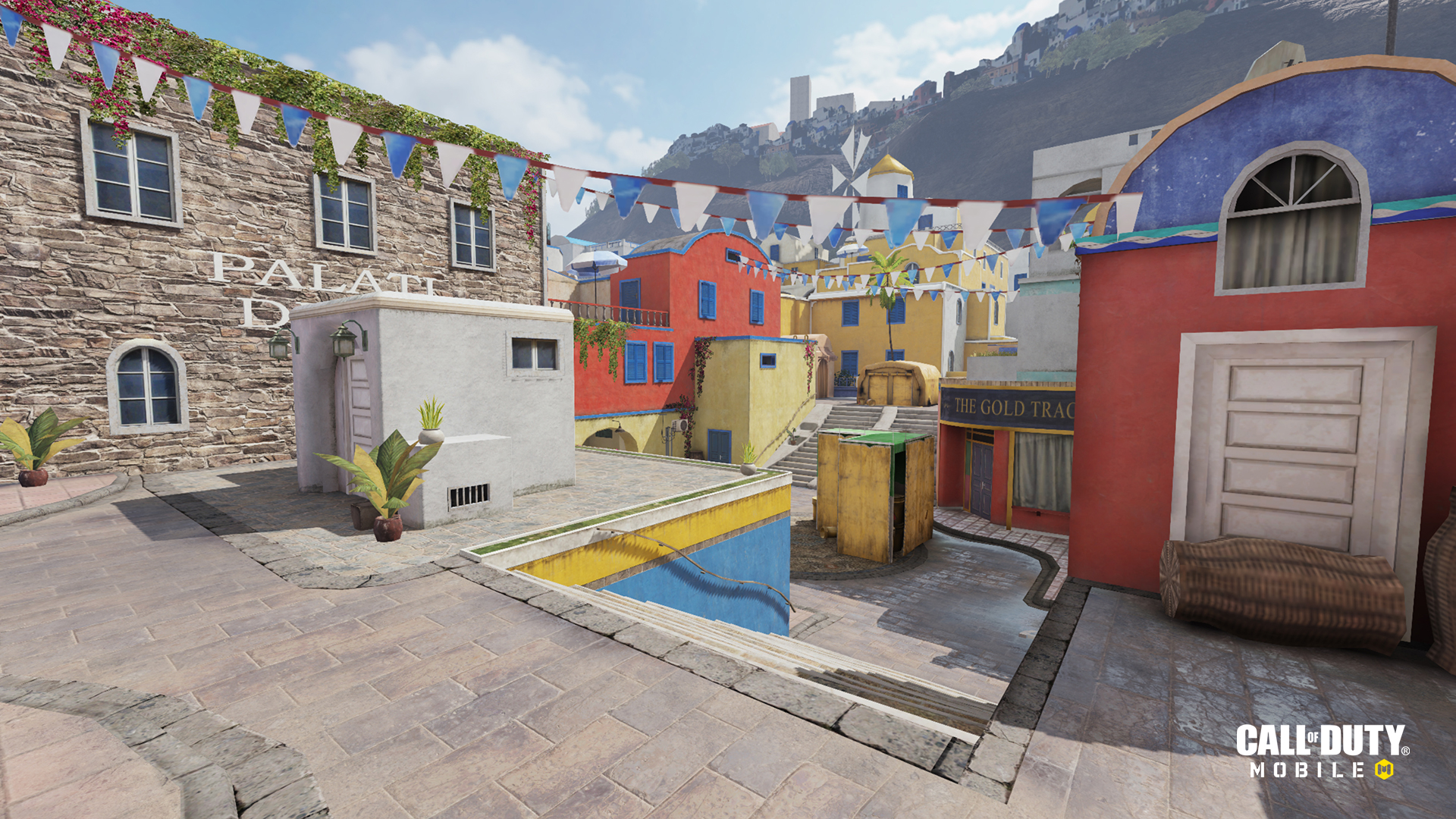 Tunisia is a large map in an urban setting, where buildings crowd the streets you fight through in a loose three-lane design. The initial spawns are located on the north and south ends of the map, each team facing inroads toward the dense center.

From the south spawn, two paths lead straight up to the main square. The left of these two paths branches toward the third which leads to the mazelike streets dominating the west side of the map. Of note is a second-story window overlooking the center street from the south, a vantage point likely to be used by many players. Continue west where several staircases create a highly vertical area where attacks come from above and below.

The center path is the most direct route from top to bottom, though multiple pathways leading to and from the street mean that it’s hardly the safest. To the right, the main square offers an open battleground with scattered shipping crates providing some cover throughout. Climb up onto the scaffolding in the upper right corner to claim some high ground and a quick escape route to the north.

The north spawn faces two main paths plus one of the few interior map spaces. The left path branches toward center street and the vertical west end, while the right path from spawn funnels down into the square, with options for approaching from the ground floor or up onto the scaffolding. 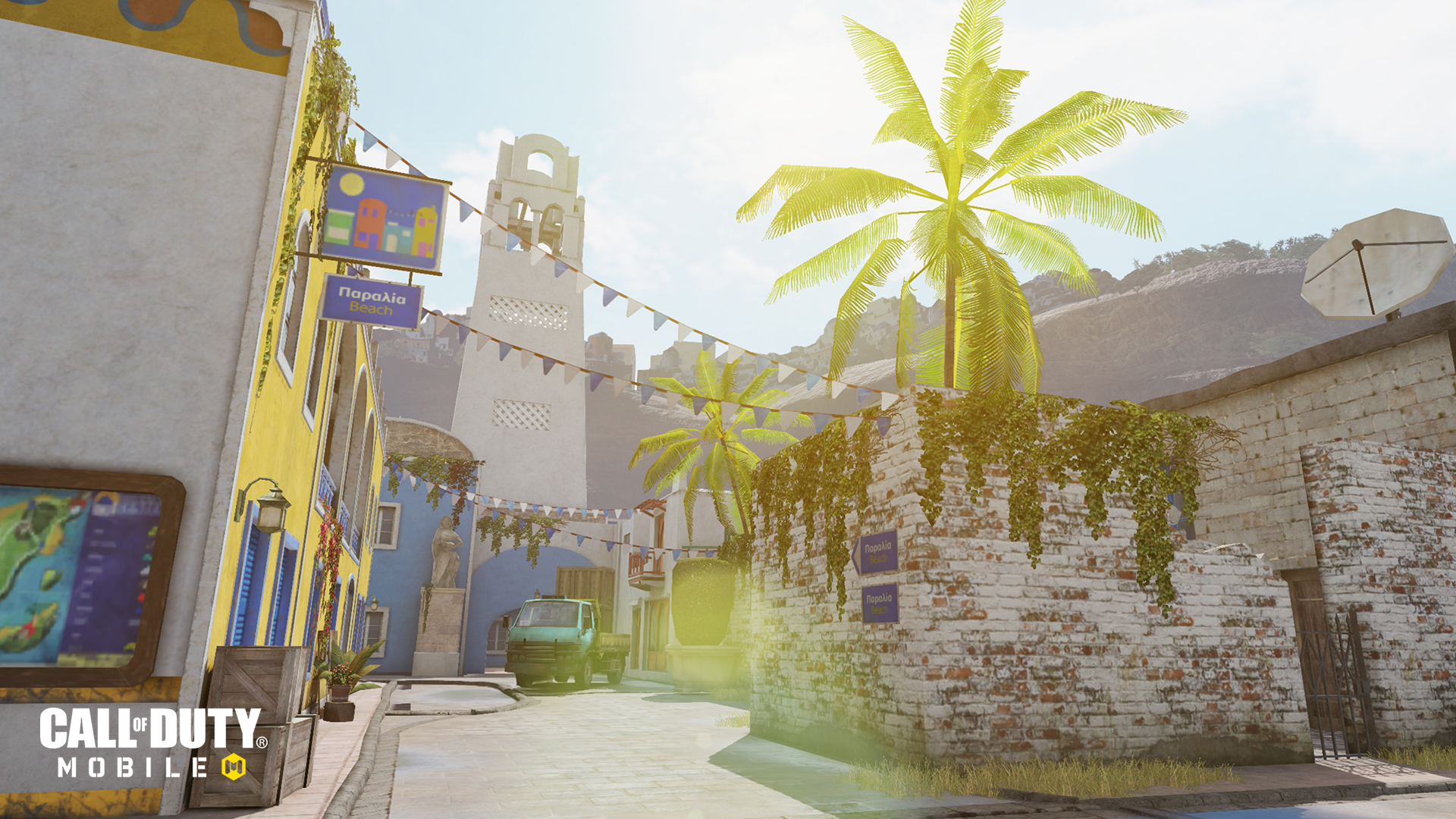 Victory in Tunisia relies on successful navigation of its twisting streets and good timing in your movements. The map’s open layout and long sightlines offer ample opportunity to take out enemies moving in the open, and vice versa against you. Thus, moving through Tunisia is a matter of checking and clearing each new area before you move on toward the next.

If you’re looking for close-quarters battle, lean into the left side of the map. The areas here are tighter with large pieces of cover from which you can launch close-range attacks against enemies on the move. A ladder and the stairways here additionally grant access to greater visibility to strike with precision. When you’re coming up out of the lower level, move slowly up the stairwell to avoid unnecessary exposure to enemies on the ground floor.

Long-range attackers will find success in the center street – especially from that south window — and in the main square. If there’s a sniper in the center street window and you need to get through, sprint to the right stairwell to find some cover and to close the distance between you and your opponent. In the main square, everything’s game, from the scaffolding to the streets where long sightlines abound.

Mid-range weapons provide the most flexibility here, lending a good balance of power and precision that performs well in the streets and the main square. You might run into trouble when confronted with SMGs and shotguns in tight areas, or when going up against snipers in long-distance battles, but skill and a good assault rifle will give you more than a fighting chance in both instances.

While its open layout invites action, remember that you don’t always have to funnel into the main square. Tunisia is a large map, and best learned by exploring all of its paths. Whether you’re spawning from the north or south, make a point of trying out different paths with different weapon types. This is the first step to mastering the map.

Once you’ve learned the map, you can better anticipate how the enemy will move through it. Each game mode directs the flow of battle somewhat differently, but overtime you’ll learn the routes and how to attack them. The window covering center street, the scaffolding in the main square, the ladder leading up to the platform in the south west corner: memorize these positions and use them to your advantage.

It pays off to stick with your teammates when possible. There will be many times when groups suddenly encounter each other — perhaps as a group turns into center street, or as the main square is flooded from top and bottom — and oftentimes the side with greater numbers wins the skirmish. Of course, a smart player can always win against greater odds, so study the mini-map and keep playing to learn all of your options at any given point. 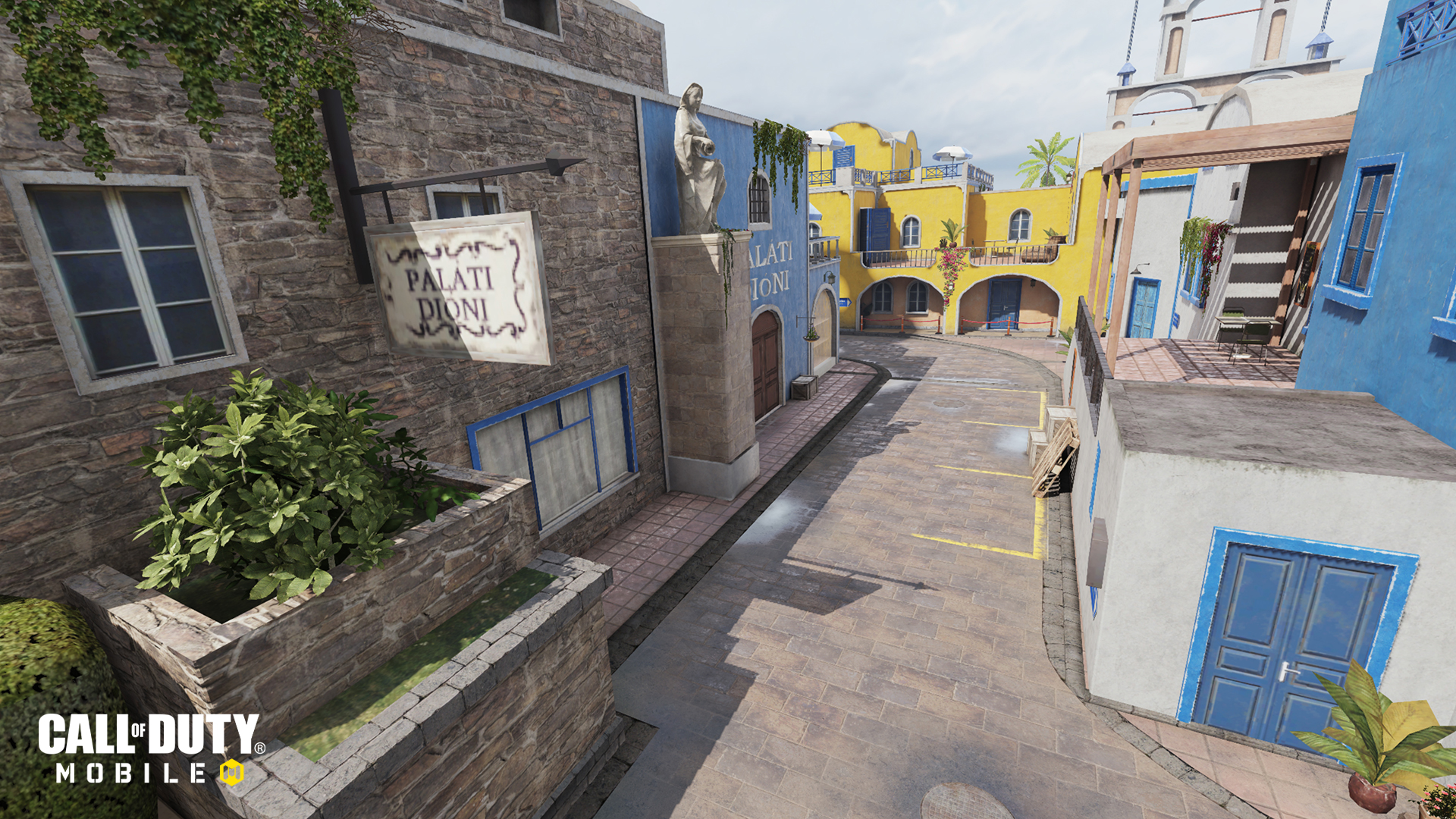 The vast majority of Tunisia is open ground under clear skies, making all Scorestreaks fair game.

The UAV is an excellent low cost Scorestreak that will help you and your teammate navigate the streets.

The Sentry Gun is a solid option due to the open street and main square – Tunisia’s sparse, open layout leaves ample room for the Sentry Gun to survey the area and attack incoming threats. Place it in a heated area and stick with it for the extra firepower.

If you’re feeling confident, equip the Stealth Chopper for the chance at doing some serious damage. To help you get there, pair it with the UAV and Counter-UAV for low cost score generators that can push you toward the Stealth Chopper during good runs. If you’re still having trouble, equip Hardline to make your points go further.

With so much open space, it’s worth considering defense as well. Use the SAM Turret for powerful anti-air support when the enemy team gets on a roll and starts filling the skies. Deploy it near a back spawn where the fighting isn’t as intense. 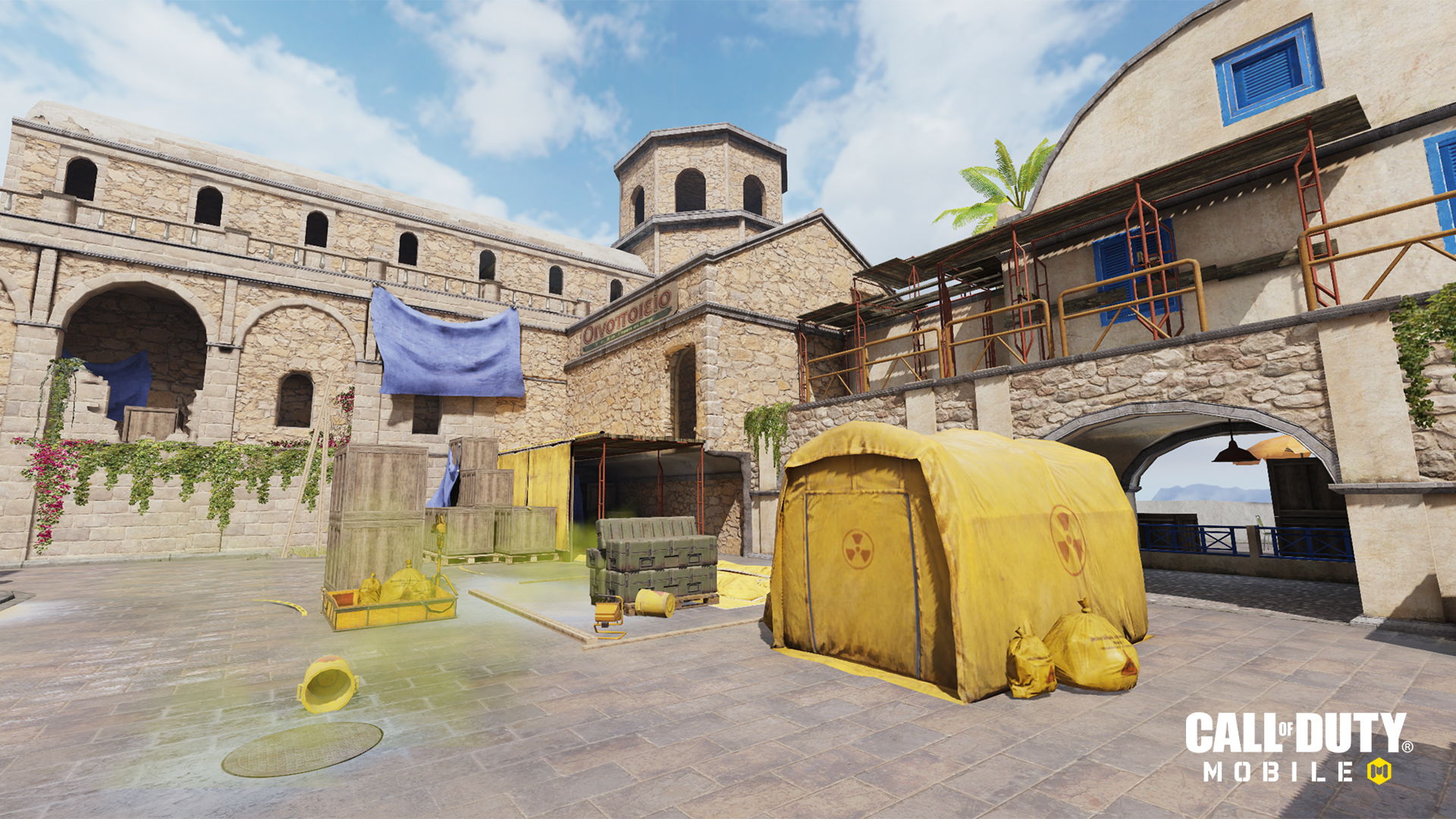 Objective play condenses Tunisia’s open field into intense chokepoints, whether you’re rushing to the Hardpoint or throwing down at the Domination B flag. For these modes you want speed and resilience — the speed to get to the objective quickly and the resilience to survive when you get there.

Consider a lightweight weapon like an SMG for faster movement speed paired with Flak Jacket and Tac Mask. In Hardpoint and Domination, where you’re grouped up in tight spaces, that extra defense can mean the difference between standing your ground or getting wiped out. Prefer more speed? Swap out Flak Jacket for Lightweight and bring along the Trophy System instead.

In Search & Destroy, it pays to move more methodically. Here’s where your map knowledge really pays off. Commit to a bomb site but be ready to move when necessary. Know your options in advance so you can take the best route each time. Move carefully into new areas and check each possible pathway leading there. 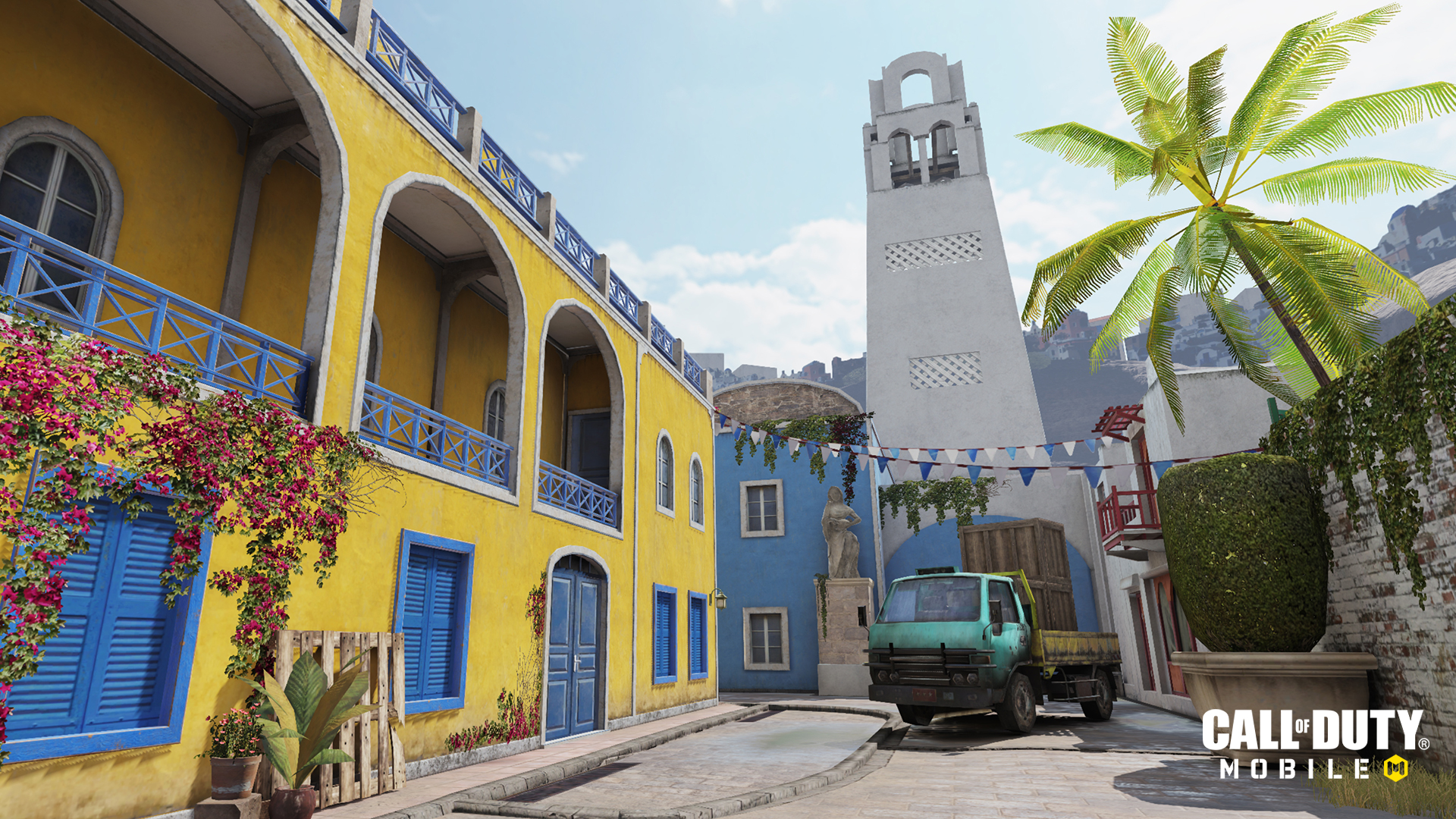 10. On a big map like Tunisia, it’s vital to scope out the enemy. Equip the UAV and use the Tracker perk to keep tabs on where they are and from where you can best intercept them.

9. Bring a sniper rifle. Tunisia’s long streets and main square provide ample long-range sightlines for the sniper on the move. Cover your teammates as they fight up close and take the objective.

8. Prefer a more aggressive playstyle? Complete the ‘Lock, Stock, Barrel’ seasonal event challenge to unlock the Man-O-War. This weapon is a high damage assault rifle that is quite agile. Overwhelm opponents with its strength and quickly get to your next engagement. 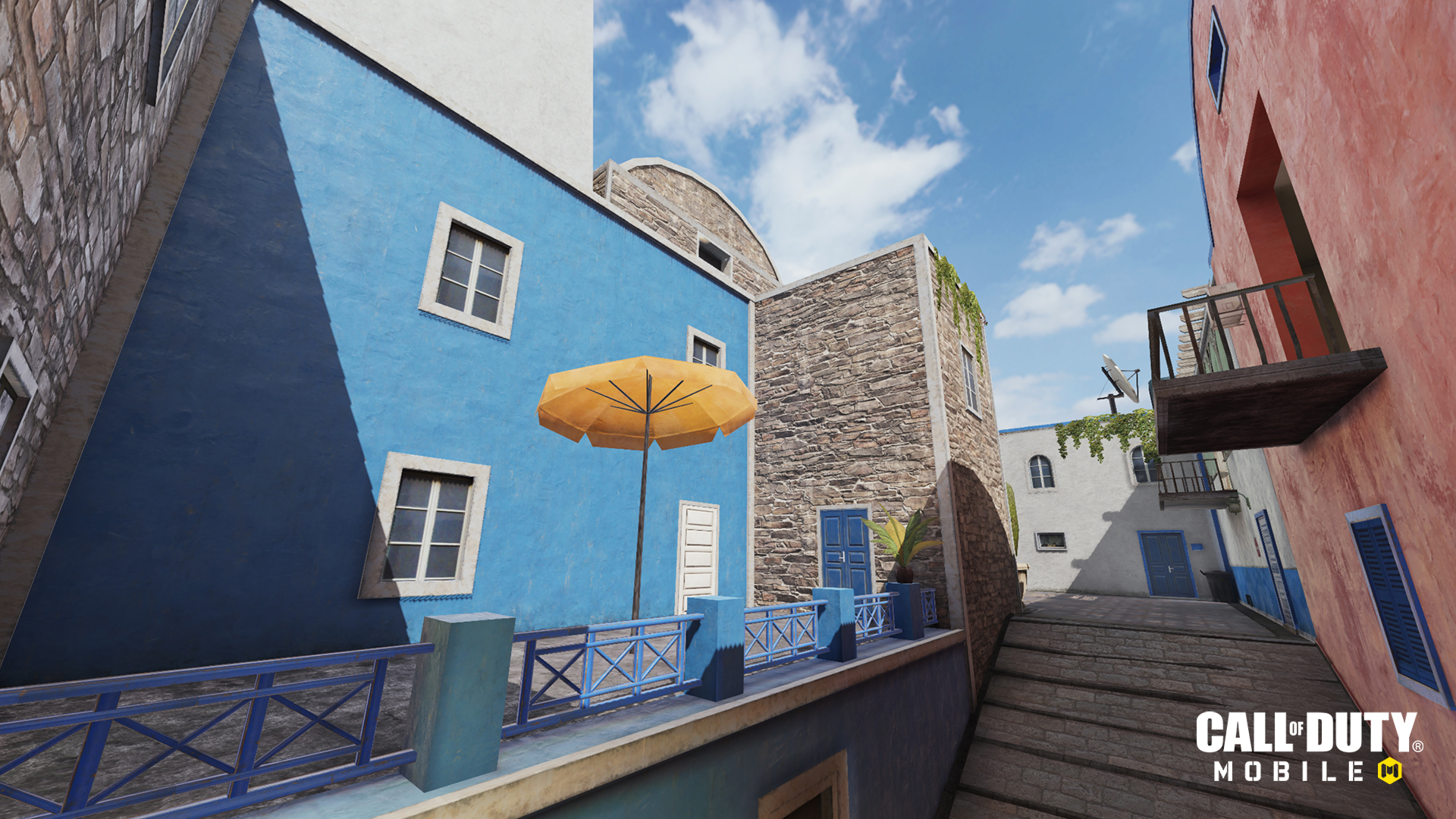 7. Use your grenades. Minimal ground cover makes it easier to take out multiple enemies in a single throw. Use a lethal to blow them away or disorient them with a flashbang and then run in guns blazing.

6. Consider using Cold-Blooded, or at least having a loadout on hand that does. Tunisia is wide open to the sky with few interior locations on hand. If the enemy starts calling in AI-controlled Scorestreaks, Cold-Blooded will help keep you alive while you’re out in the open.

5. For the same reason, bring a launcher. Find a safe spot, shoot down some aircraft, and earn more points toward your next Scorestreak.

4. Bring your Smoke Grenades. Need to get to an objective in the main square, but the fighting’s too hot? Use the Smoke Grenade to cause a distraction while you move to the point. 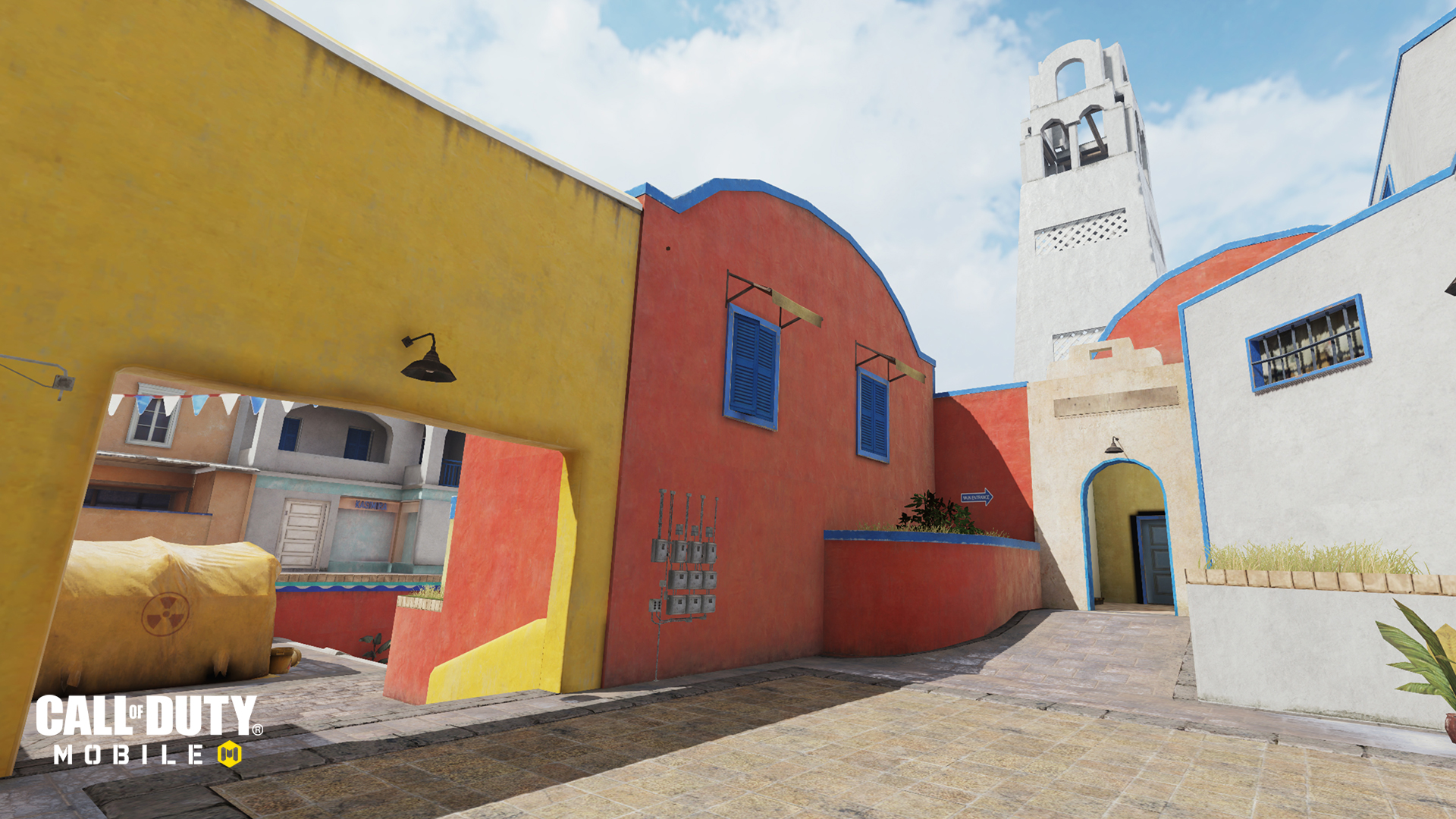 3. Care Package incoming! Tunisia’s segmented layout makes it easier to step back from the fight as you call in a Care Package. Cross your fingers for something good.

2. Equip the Tempest Operator Skill to damage multiple enemies at once. This can be used to devastating effect in the main square and during street fights where teams are often clustered.

1. Have fun! Tunisia is another great addition to the Multiplayer lineup, and your skills are sure to improve as you work toward mastery of it.