Captain Butcher’s gear train keeps on rolling with an Epic Variant of an all-new Pistol, an impressive Resistance Uniform and a Contract that’ll help you to achieve Gun Game glory. Captain Butcher’s a champion of brevity so, let’s get into it. 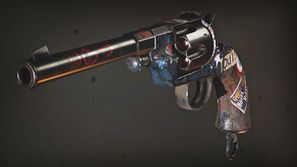 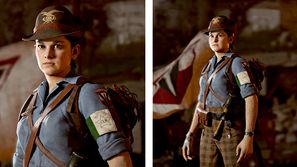 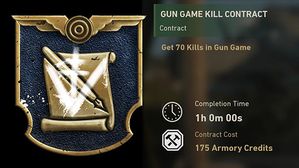 Gun Game’s back! And if you’re gonna show off how handy you are with a variety of weapons, you may as well earn yourself a Resistance Supply Drop while you’re at it. Gun Game is a high-action Free-For-All game mode, so you won’t have to look hard for folks to take down. Each game typically lasts around 8 minutes or so, giving more than enough time to get your bearings if you’re new to the mode.

You won’t be able to choose a loadout, but making the most of each weapon you’re dealt should make that 70-kill mark easy to hit. This is mostly done by playing to the strengths of each weapon class. Got a scoped Rifle or a Sniper Rifle? Keep out of the fray so your enemies won’t see you lining them up in your sights. Get dealt a Shotgun, Pistol or a high fire rate SMG? Stick to tight hallways or dark corners for close-up combat and avoid wide-open areas. Got an LMG? Well, then, you’ve got a pretty powerful piece in your hands with a huge magazine and decent range, so how close you want to meet the enemy is up to you.

Factoring each weapon’s strengths and weaknesses not only makes Gun Game more fun, it’ll allow you to cycle through weapons quickly and, hopefully, you’ll make it to the Throwing Knife for that satisfying final kill. Gun Game also rewards players with 2XP. So you’ll not only get a crack at Resistance gear with a Resistance Supply Drop, but you’ll rank up twice as fast. It’s a bang-bang win-win play, so scoop up that Contract and take what’s yours.

Captain Butcher’s a busy man so, that’s all the time he has for this week. But, The Resistance is only growing stronger and it’ll be around for a few weeks longer. Keep an eye on your inbox for next week’s edition of the Quartermaster Comms. Until then, long live The Resistance.