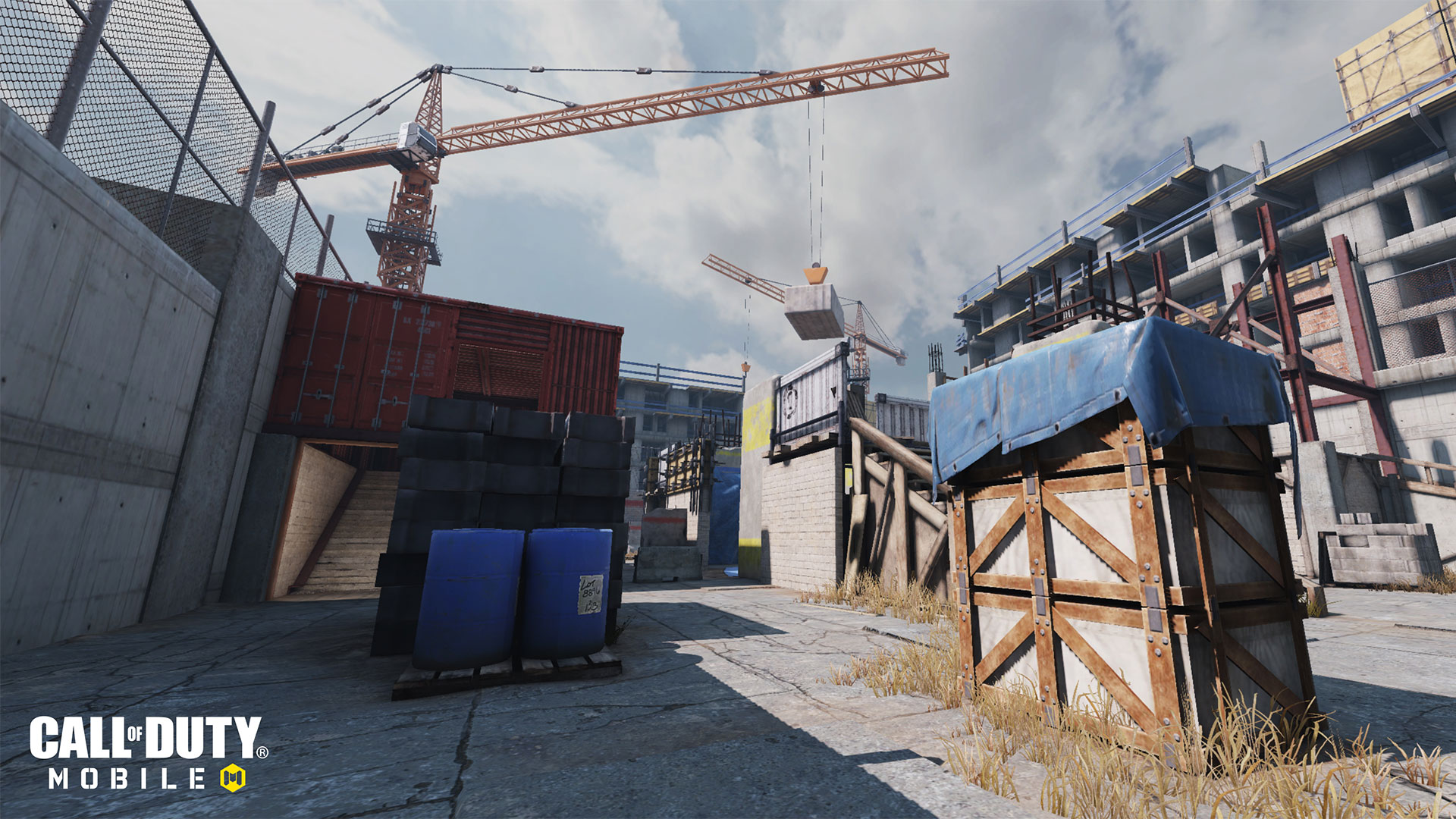 Take the fight to Cage, the first Call of Duty: Mobile Multiplayer map never seen in a major Call of Duty® release. This Map Snapshot gives you everything you need to start dominating on Cage.

Take the fight to Cage, the first Call of Duty: Mobile Multiplayer map never seen in a major Call of Duty® release. This Map Snapshot gives you everything you need to start dominating on Cage.

Disavowed, the fourth season of Call of Duty: Mobile is here and with it comes the first Multiplayer map developed specifically for Call of Duty: Mobile: Cage. A small map set in an urban construction site, Cage encourages frequent close quarters engagements, flanked by long sight lines opening opportunities for snipers and other long-range attackers.

On release, Cage supports Team Deathmatch, Snipers Only, Gun Game, and Free-for-All. Read on for a map overview and strategies to defeat the opposition no matter the mode.

As a small map featuring a symmetrical layout, it doesn’t take long to get your bearings on Cage. The top and bottom spawns mirror each other, with each team facing a staircase straight up the middle for a vantage point over the center, and long open alleys to either side. Further out stand two-story structures with multiple entry points and partial views over several locations.

Much of the action takes place along the map’s natural vertical flow, though with the center being open on the sides, expect plentiful engagements as players cross from alley to alley seeking shortcuts to their enemy’s demise. This risks exposure, however, to shots from the above platforms, so check that the coast is clear before rushing through.

The map offers heavy protection in the form of thick crates and concrete blocks scattered throughout, so even though space is limited, you can still play tactically. Go on the attack when you’ve got the drop on someone or take a short breath behind cover to reload and heal up in heated moments. Keep an eye on the mini map to help make smart positioning decisions.

The two-story side structures provide a means of travel aside from the open alleyways, and each offers decent views into the top and bottom spawns, as well as the center. With a stairway on both sides and a ladder leading directly to the second level, these areas favor close quarters builds as shotguns make short work of the enemy.

While a smaller map, Cage caters to all playstyles, the focus being on choosing the best position for the weapon in your hand. The alleyways naturally attract snipers and other long-range attackers, who can dodge in and out of cover while pelting enemy players. Switch from alley to alley when the fighting grows quiet, or you risk being flanked from the other side. If you’re on the receiving end of this, use the tall cover in the center alley for protection, and then either pop back out and attack or back up to a safer location.

Short-range loadouts perform exceptionally well in the side buildings, where players are squeezed together. Rush in, hip-fire to maximize your mobility against close targets, and then either move on or defend your position and shoot enemies below. Know when to book it, though, because you won’t be safe for long.

When combat heats up in the middle, use the center staircases for an overhead power position. Keep in mind, however, that the symmetrical design of the map means an enemy player positioned on the opposite side will have a straight shot at you. And of course, keep your head on a swivel to avoid being taken out from behind.

In the north and south spawn locations, use the high center walls to keep cover. Just remember that it blocks your view as well as your enemy’s, and games of cat and mouse can break out here as players chase after one another for the kill. Also take note of the side structures, where players can get shots on the spawn locations.

Now that you’ve got a grip on the basics, let’s dig into specifics. Success on Cage relies on anticipating enemy movement and knowing when to rush in and when to hold your ground or fall back. With its open, rectangular alignment, you can get a good view of the battle from the corner spawn locations, for a clearer idea of where the fight is taking place.

Don’t run always run straight in — the shortest path isn’t always the best path, especially in a small map like this where you can flank easily. If there’s a firefight down the alley, cut through the center. If middle map is seeing the most action, run into one of the side buildings and shoot down.

Pistols are your friend here, whether your primary is geared toward short- or long-range engagements. If you have a sniper rifle or LMG equipped, you’ll want the pistol’s close-range power when the enemy closes in, and if you’re up front in the frenzy of battle, use that fast swap when reloading would take too long.

Make good use of your lethals and tacticals to blow up and disorient enemies down an alley or up in one of the side structures. Have a loadout with the Trophy System at the ready in case the enemy starts doing the same. 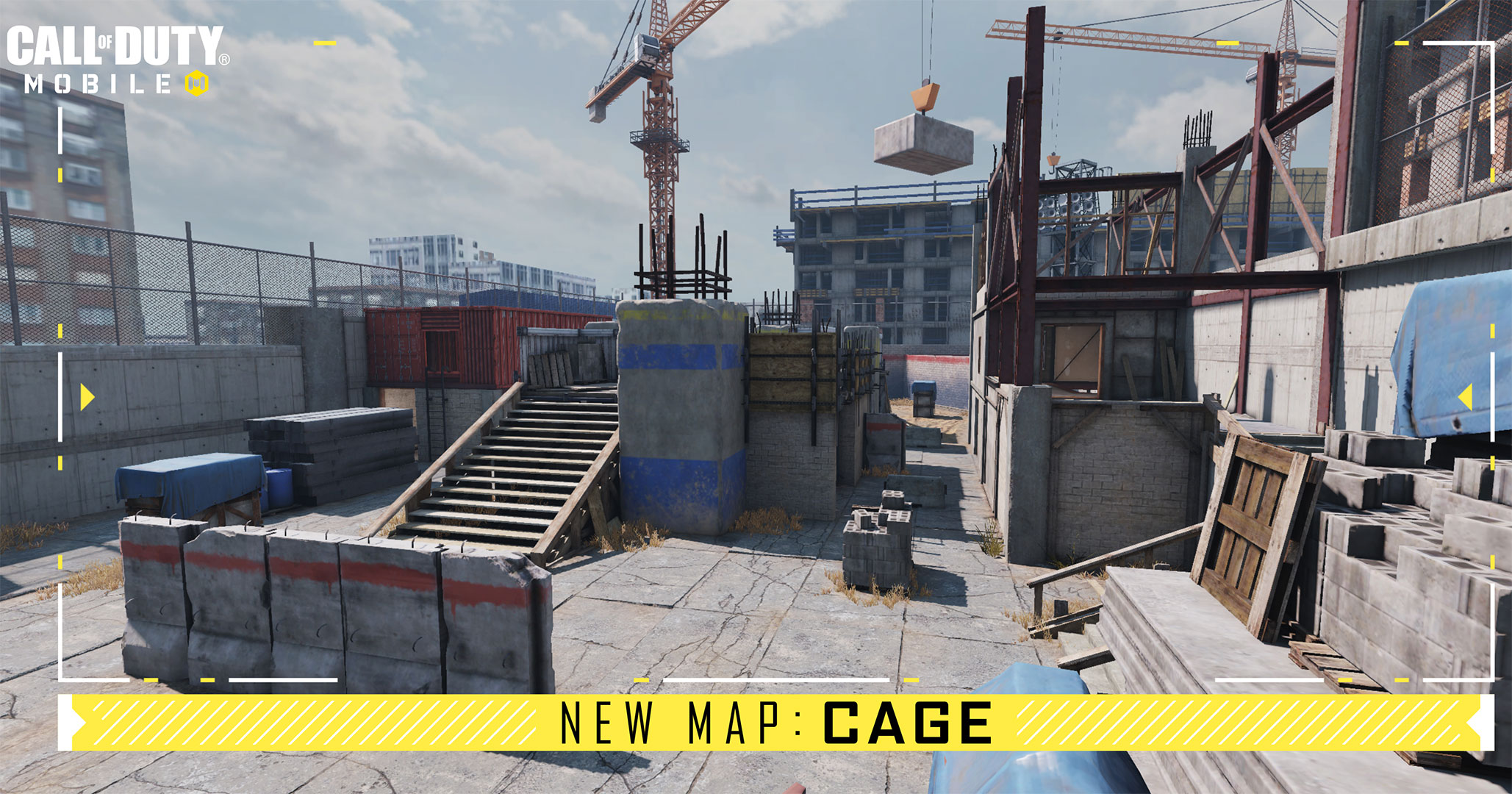 Except for some slight overhead cover in the side structures and down the center, Cage is open to the skies, meaning there aren’t any poor choices here. Provide intel and counter-intel with the UAV and Counter-UAV, to give your team the upper hand in this small map where knowing the enemy’s location is so important. Enemy snipers grouping up in their spawn? Take out a cluster of them with one of the aerial Scorestreaks.

The Sentry Gun can do real work placed at either end of an alley, or along one of the side staircases pointing toward a spawn location. You might want to stick around to protect it, however, or you risk giving the enemy an easy flank to disable the automated weapon. The real slayers can attempt to build up score for the Stealth Chopper and VTOL, where a mostly unobstructed view can lead to many kills. And when the enemy team is unleashing their Scorestreaks on you, take out a launcher to even up the playing field.

Cage’s supported modes on release — Team Deathmatch, Snipers Only, Gun Game, Free-for-All — are all about the kills. Much of the above can be used to dominate in any of these modes, particularly in Team Deathmatch and Snipers Only.

For Snipers Only, you have the option of equipping the powerful and slow DL Q33, or the faster but less powerful Arctic .50. Both weapons are extremely deadly at range, and in precise hands the Arctic .50’s lower damage output is hardly noticed. The alleys and upper center platforms see more action here with their natural long sight lines, but don’t hesitate to get up close and hip-fire to throw the enemy off balance.

You’re all on your own in Gun Game and Free-for-All, so all your accumulated map knowledge is really put to the test. In Gun Game, position yourself to best compliment your current weapon, and don’t forget — use cover to your advantage. You don’t have to fall back with a long-range weapon when timing is tight, just make the enemy waste their shots and then retaliate before they can recover. Free-for-All favors a high and fast kill count, so consider equipping Extended Mags and Scavenger, and don’t let up.

10. Just because the map is small, it doesn’t mean you need to run recklessly around. A precision weapon and strong positioning can take care of enemies caught in the frenzy of middle map.

9. Or get right up in it. Equip the Fast Recover, Toughness, and Alert perks with an SMG or shotgun and go to work. You’ll heal up faster, stay on target when shot, and have an extra layer of awareness for enemies attempting a flank.

8. Take advantage of the covered walkways underneath the center staircases when you need a short respite from attacks in the center or sides. Don’t stick around too long or you’ll get caught by an enemy in transit.

7. Complete the H.I.V.E. Challenge while it lasts to unlock the new H.I.V.E. Operator Skill. This gun launches proximity mines that when triggered release a swarm of nano drones that kill nearby enemies, perfect for the tight confines of Cage.

6. Hardline is your friend. Cage offers plentiful opportunities for smart players to land multi-kills, and Hardline rewards your efforts by getting you ever closer to that next powerful Scorestreak.

5. Pair up Skulker with a Laser Sight attachment on your weapon and own the middle of the map by circling your opponents before they can get a bead on you. Snipers up in the center platform? Move out to the side and do work in an alley or side building.

4. If you run into an enemy with your guard down in Gun Game or Free-for-All, fall back and let them come to you while you recover. The map’s small size means that many players will play aggressive and push up, use that to your advantage and lay in wait when the situation demands it.

3. Equip lower cost Scorestreaks, like the UAV, so you can fight aggressively and benefit from consistent intel on enemy locations. Avoid the Care Package unless you’re confident that you can hold your ground until it arrives.

1. Play, play, and play again. Cage is a fast and frenetic map that you’ll only become more proficient on over time. Rack up that experience and start barreling through Disavowed’s tier list and challenges to earn rewards.