Saddle Up for CWL Fort Worth: Live Throughout This Weekend

Tune into CWL Fort Worth throughout the weekend as CWL Pro League teams and Open Bracket challengers compete for glory in the Lonestar State.

Everything is bigger in Texas, and that includes this weekend’s first open event of 2019 for the Call of Duty World League, Presented by PlayStation®4.

Live from the Fort Worth Convention Center from March 15-17, the official esports league of Call of Duty will showcase the 16 CWL Pro League teams battling for the CWL Fort Worth Cup. CWL Fort Worth will also host hundreds of hungry amateur players ready to take on the MTN DEW® AMP® GAME FUEL® Open Bracket, which features its own dedicated prize pool.

A great way to think about how to improve your game is to watch these broadcasts: Both levels of competition will be streamed on Twitch.tv/CallofDuty,  and in-game on the PlayStation® 4.

The last time the CWL entered the Fort Worth Convention Center, OpTic Gaming shut down an eUnited Grand Finals upset with an emotional Game Five victory.

Two years later, that championship squad will return in near totality, with Matthew "FormaL" Piper being the lone man outside of OpTic as part of Luminosity Gaming.

Here is the full pool play picture for the CWL Fort Worth Cup: 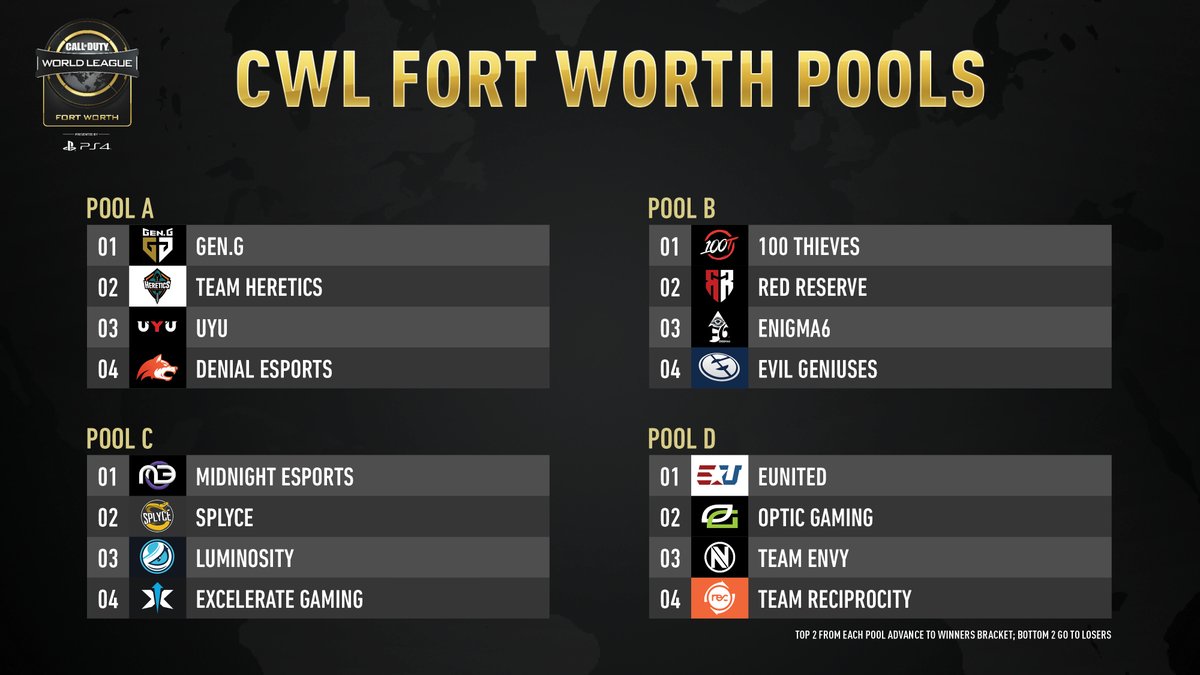 These pools were drawn by ranking at the end of the CWL Pro League’s first leg, which was held from February 4 to March 2. Over that month, Gen.G went 6-1 in Division A to get Pool A’s top spot, while 100 Thieves, Pool B’s first team in, broke a three-way tie for first in Division B against eUnited and Team Heretics.

While those Pro League teams embark on their quest for the cup, the MTN DEW® AMP® GAME FUEL® Open Bracket is set to bring absolute madness to Fort Worth. Over 190 teams will battle in a tournament for cash prizes and CWL Pro Points, which are crucial for qualification and seeding at events held later in the season. You can read more about this amateur competition here.

The action starts on Friday, March 15 at 1:30 p.m. CDT / 2:30 p.m. EDT with the opening rounds of the MTN DEW® AMP® GAME FUEL® Open Bracket on its own dedicated channel and CWL Fort Worth Cup pool play shown on four streams:

Watching any of the five streams available live throughout the weekend can be a great way to improve your game, and there’s knowledge to gain from the best Call of Duty: Black Ops 4 players in the world.  For more information about the event and its schedule, check out the official CWL website here.