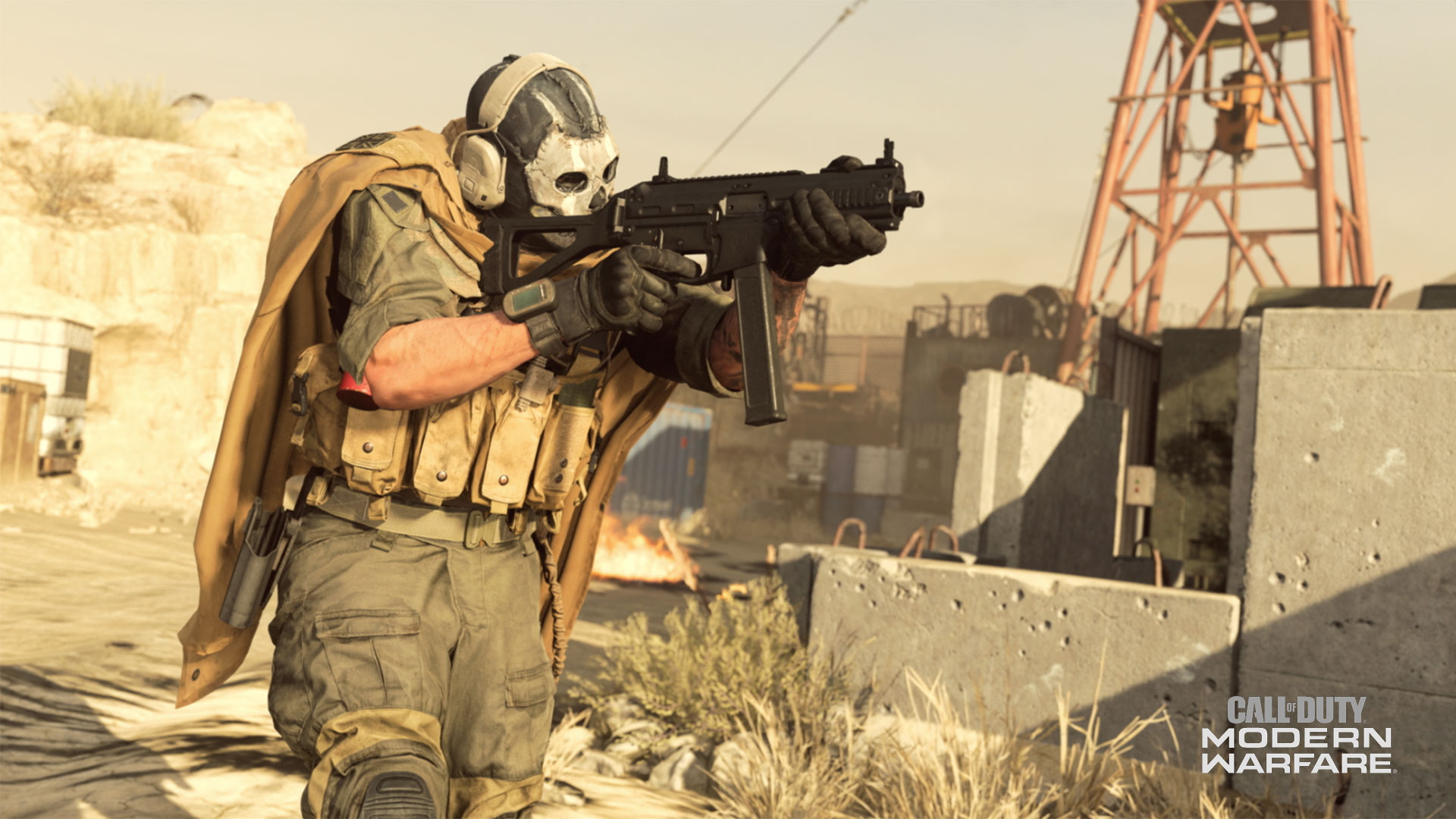 Unlocked at Tier 31 in the Season Two Battle Pass, the Striker 45 brings a powerhouse addition to the SMG weapon class. Gunsmith enthusiasts have a lot to work with here, including an option for a 2-fire burst mode using special ammunition.

Build upon the weapon’s natural strengths for power in the mid-range or focus on close-quarters attachments knowing that you can still land shots at range when you need to. This is a weapon you want to level and experiment with. In this Weapon Detail, we aim to show just how versatile the Striker 45 can be. 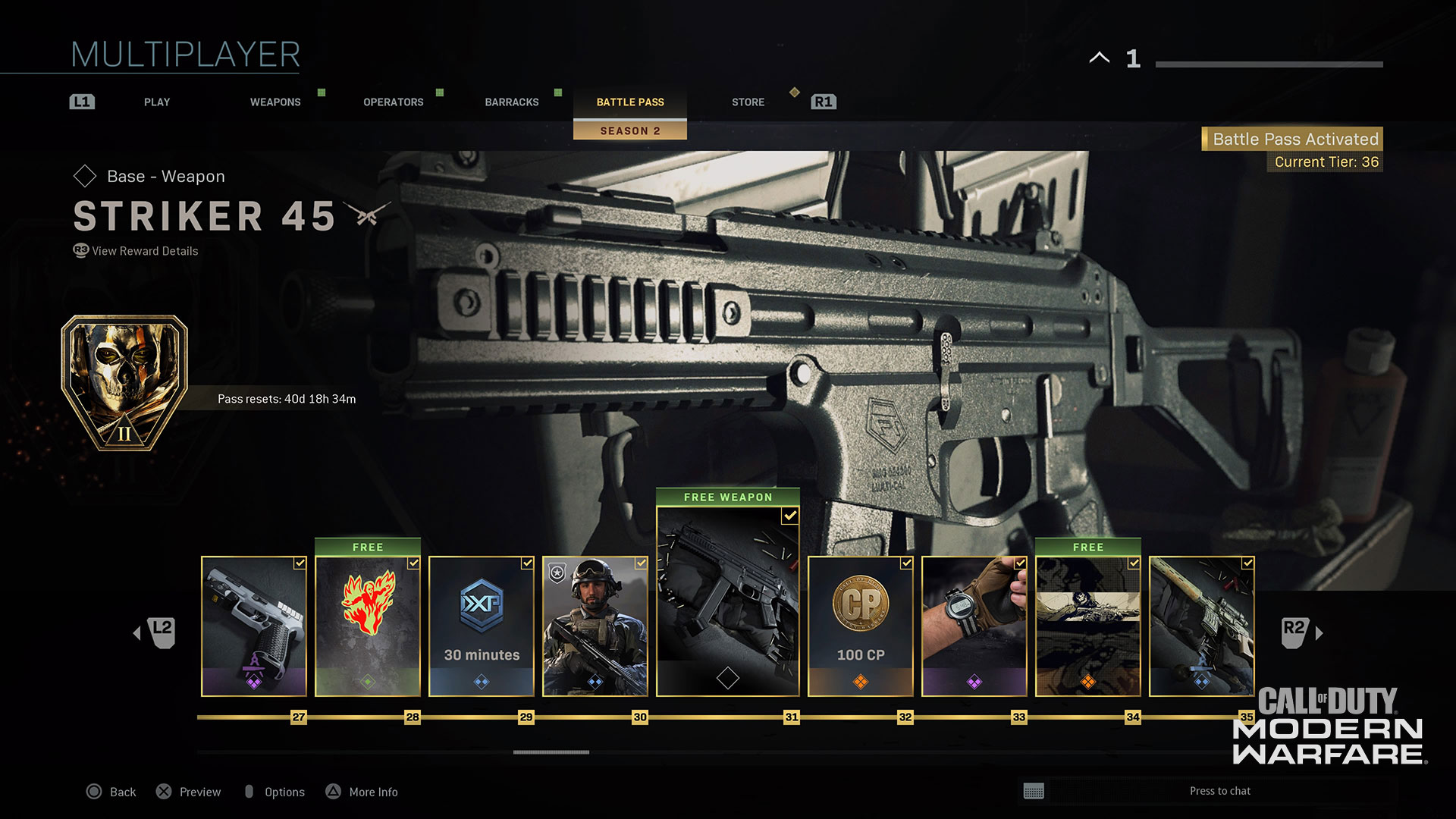 The Striker 45 offers 25-round magazines firing .45 Auto ammunition. The low ammo count is compensated for by the weapon’s natural precision and stability at range. Ammunition attachments for 45 Round Mags and .45 Hollow Point 12 Round Mags make for completely different playstyles, so you may want to create and save several customized weapons in Gunsmith.

Optics certainly improve your ability to track targets, but the standard iron sights are clear enough that you don’t have to use one, allowing you to use your allotted five attachment elsewhere. The biggest drawback to consider is the weapon’s low natural ammo supply of 75 total rounds on spawn. If you’re not careful, you might find yourself low on ammo in a desperate situation. Luckily, there are ways to overcome that deficit without sacrificing power. 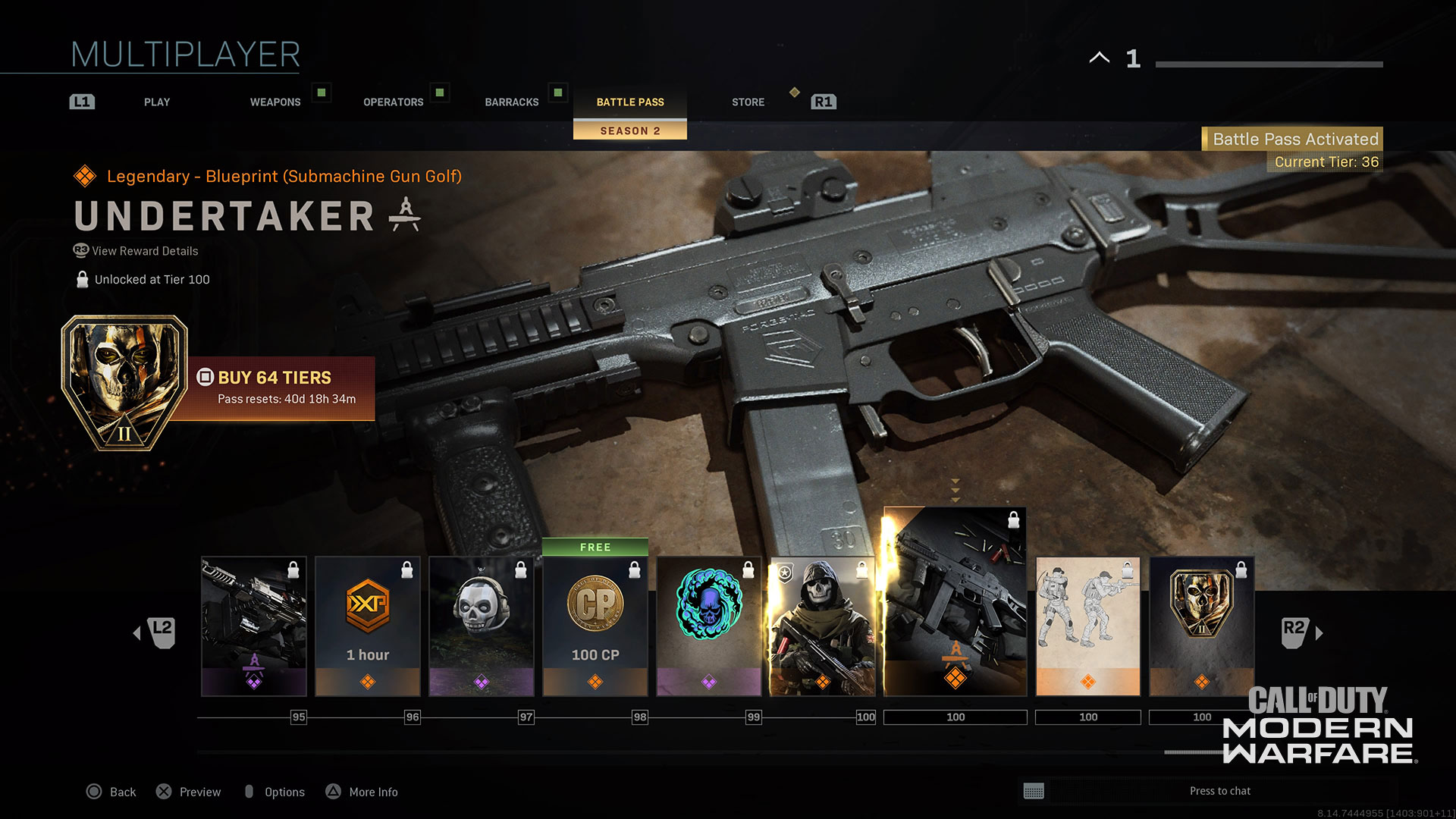 Available at Tier 100 in the Battle Pass, the Undertaker Legendary Blueprint is both sleek and effective that gives an extreme boost to the weapon’s accuracy.

The Lightweight Suppressor maintains a low profile in skirmishes, with the Ranger Foregrip and FTAC 60 Series Rubber stacking recoil control for precise fire at range through the precision picture of the PBX Holo 7 Sight. The Undertaker is ready for more than just mid-range play as the 5mW Laser offers improved sprint to fire speed and hip fire accuracy to handle sudden close-quarters engagements. 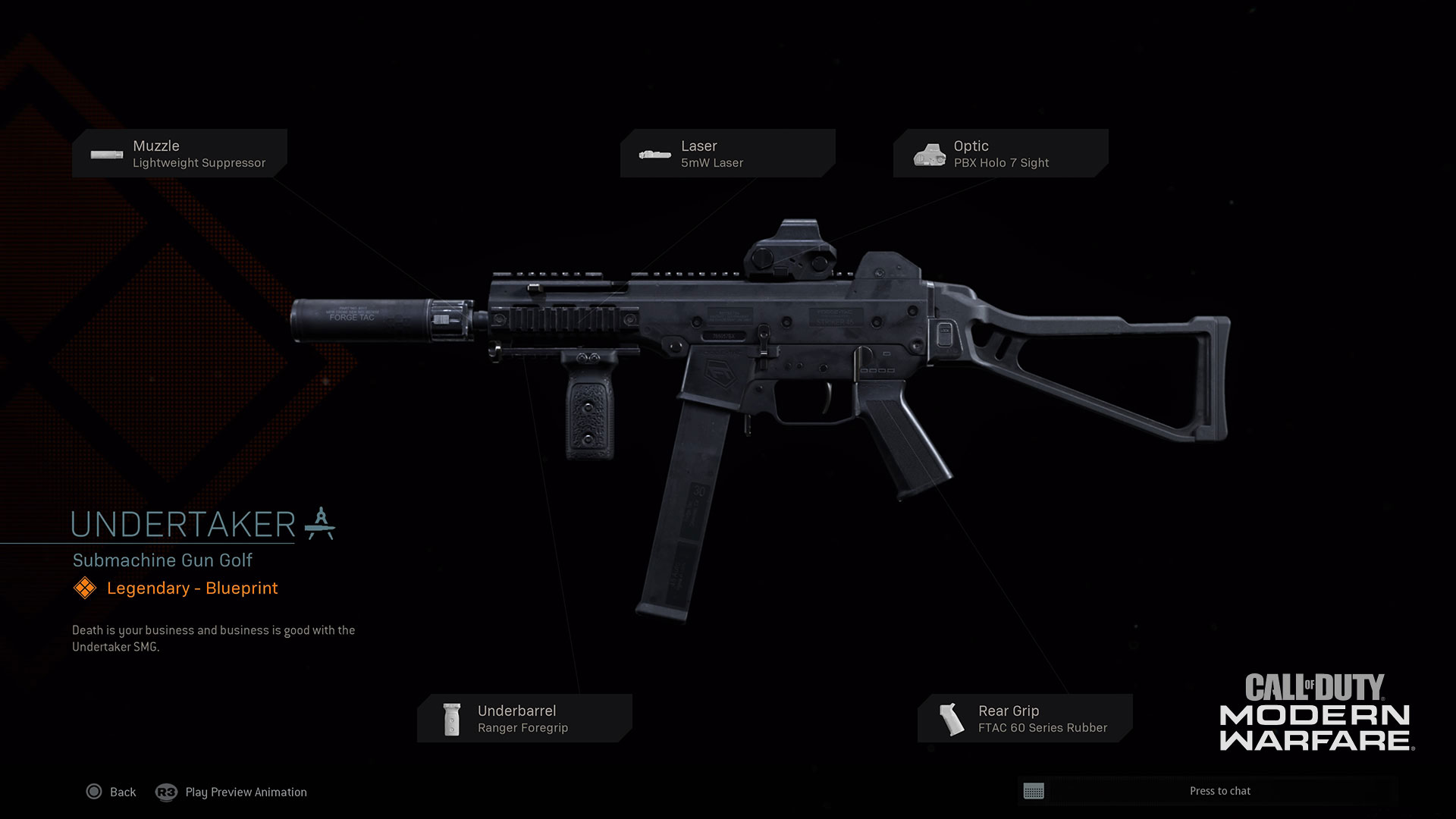 The Undertaker is an exceptional accurate SMG and coupling it with Stopping Power Rounds and the Tune Up perk will make this weapon even more dangerous. Find your footing and land your shots to quickly earn a UAV and springboard that into getting all of your streaks. Alternatively, you can swap out E.O.D. for Kill Chain to help your reach streaks faster.

The Sterling Marksman Blueprint is available at Tier 8 in the Battle Pass system. As an SMG, the Striker 45’s extreme long-range options are limited, but this weapon fills in the gap. Equip the ‘Sterling’ to fire deadly, accurate shots at a distance. 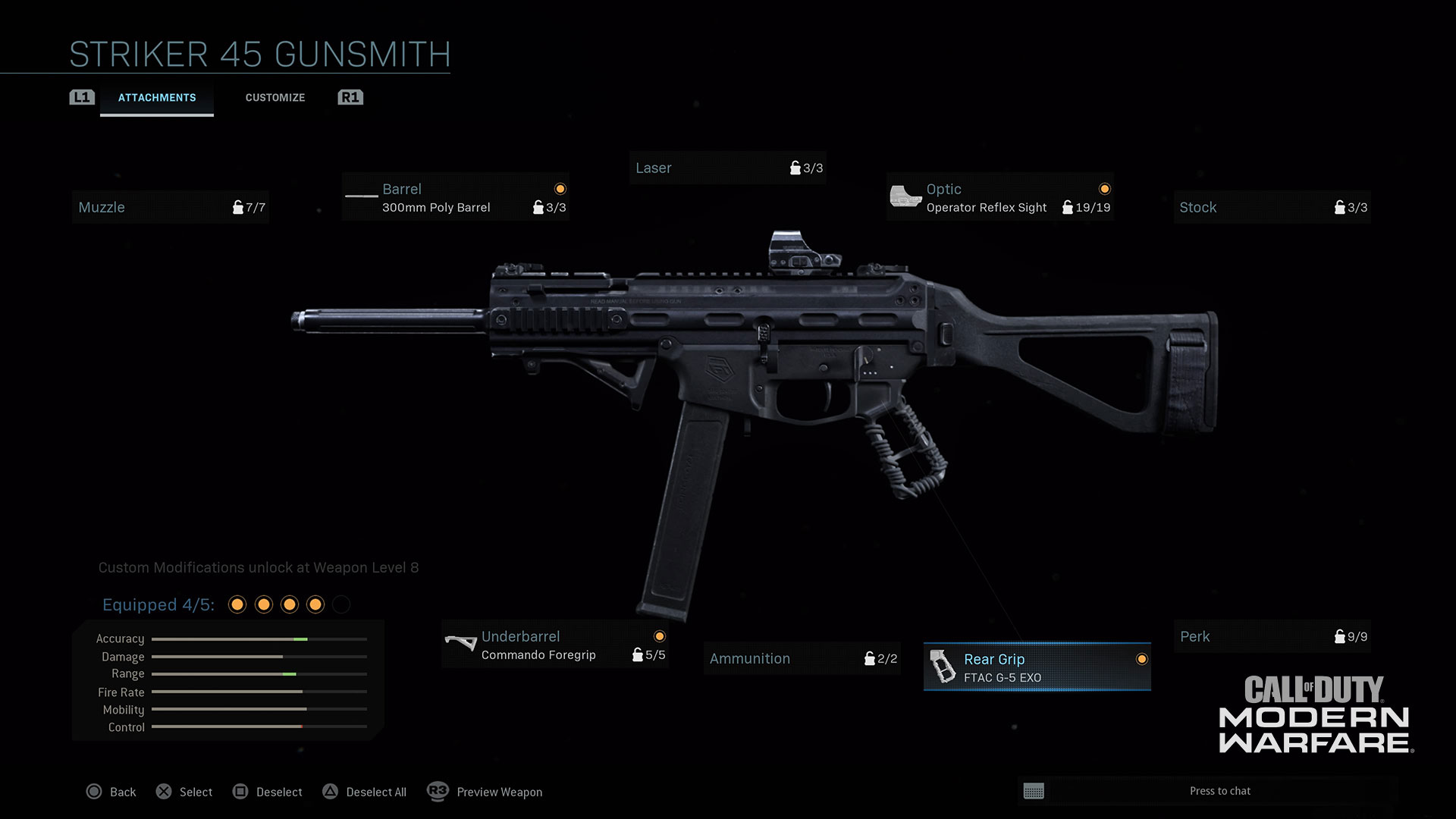 The signature Striker loadout demonstrates the weapon’s excellent versatility, with a mixture of attachments aiding both ranged strength and mobility. The 300mm Poly Barrel improves your damage at range using a clear picture through the Operator Reflex Sight with added recoil stabilization from the Commando Foregrip. The 5mW Laser and FTAC G-5 EXO provide close-range power with improved hip fire accuracy and faster reaction times.

Equip a pistol with .45 ammo and Fully Loaded so that your Striker 45 can share a greater ammo pool. Quick Fix rewards aggressive objective play, with Pointman helping to build up to the devastating VTOL. Tune Up allows more uses of the Trophy System, to keep you and your teammates safe when capturing objectives. This class performs particularly well in Domination, Hardpoint, and Headquarters. 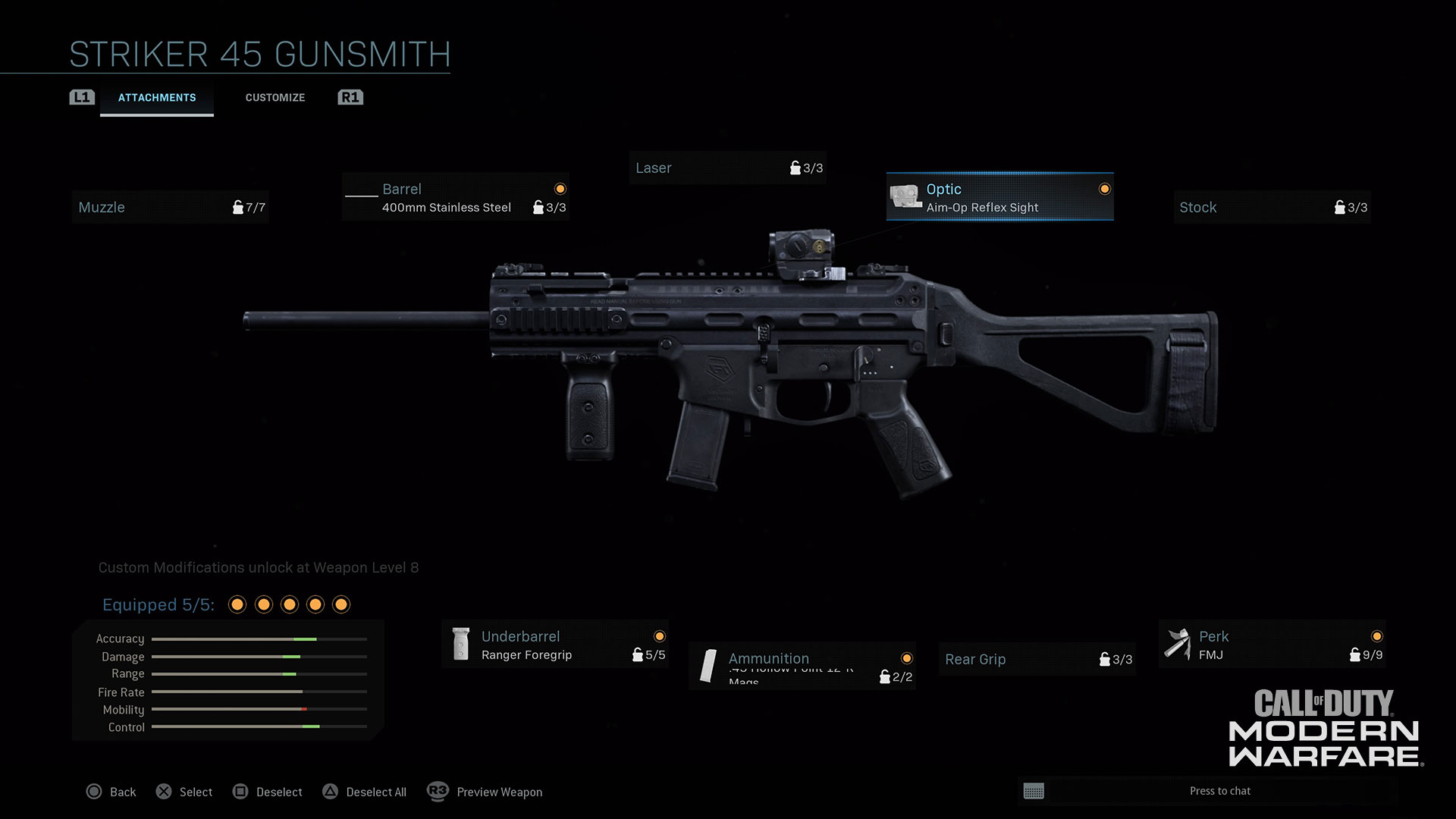 Cold-Blooded gives you a lower profile and added defense against AI targeting systems, while Restock and Shrapnel paired with the Munitions Box give you plenty of explosive power. Use the Personal Radar to detect incoming enemies and remember in close-quarters engagements that switching to your pistol is always faster than reloading. 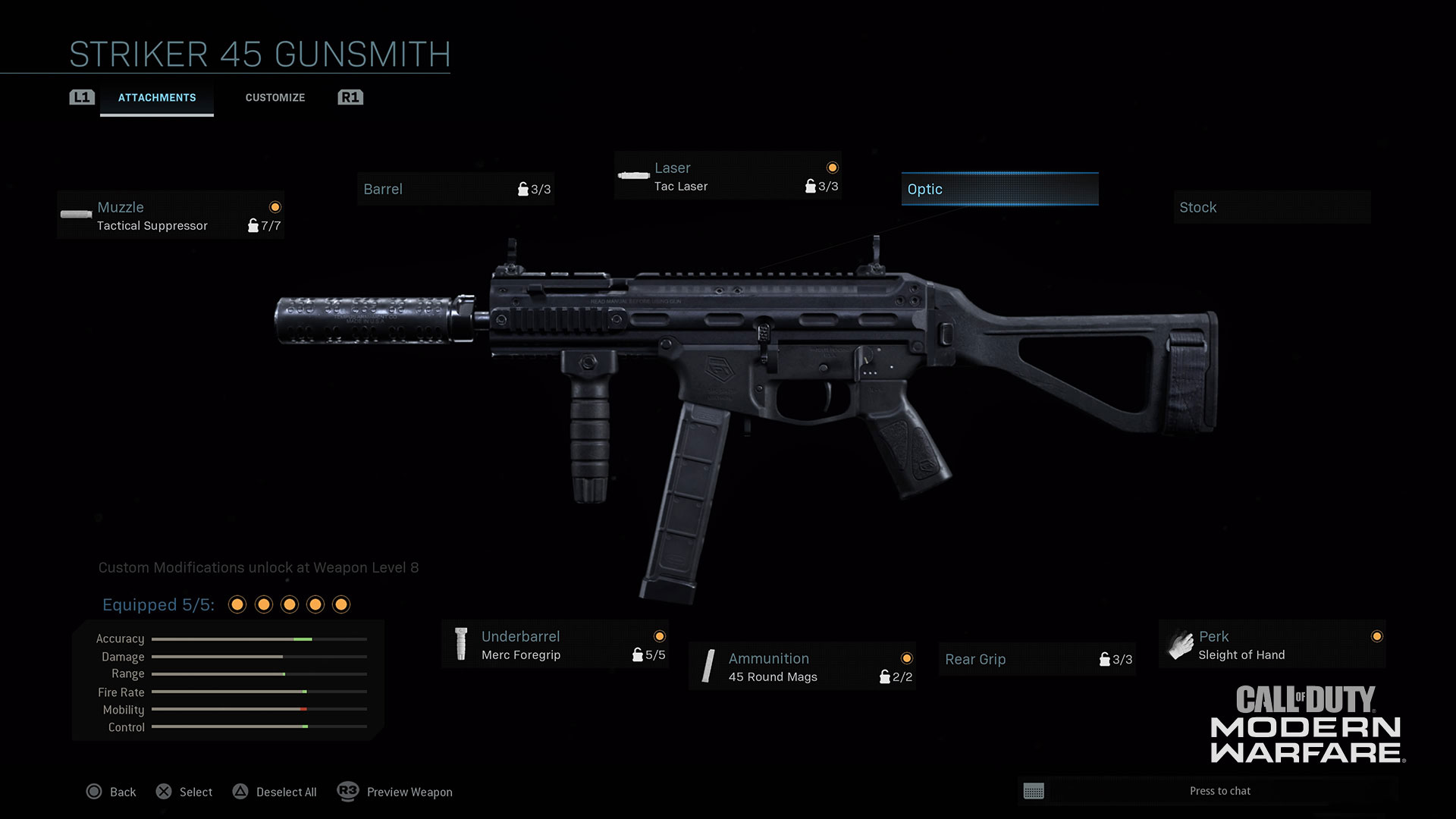 Transform the Striker 45 into a close-range tactical shredder with meaty 45 Round Mags and a quick reload speed using Sleight of Hand to minimize downtime in your relentless attacks. The Tac Laser and Merc Foregrip make for rapid, stable target acquisition, and the Tactical Suppressor lowers your profile while fighting.

E.O.D. and Battle Hardened grant the extra protection needed to maintain an aggressive playstyle, with Overkill providing mid-range power using your assault rifle of choice. Take Stopping Power and Recon Drone as your Field Upgrades, so that you can choose between dealing extra damage or gaining enemy intel depending on the current needs of the match. 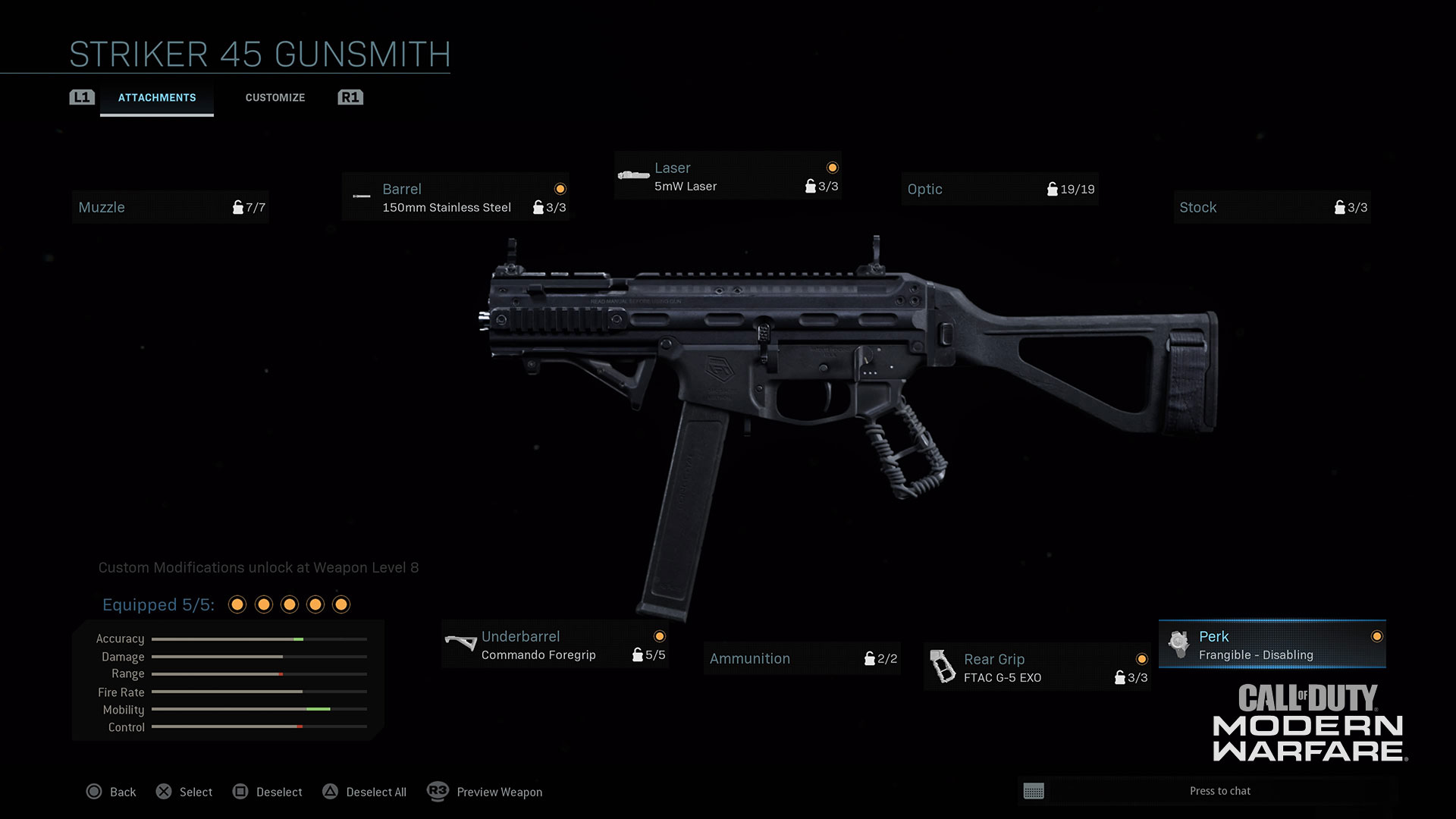 The Tracker favors speed and crippling power to overwhelm opponents on the run, making this a good loadout for small to mid-sized maps and game modes like Search & Destroy and Cyber Attack where outmaneuvering opponents is essential to taking the round.

The 150mm Stainless Steel barrel and FTAC G-5 EXO both improve your aim down sights speed for snappy target acquisition, and the Commando Foregrip keeps your shots on target. The robust 5mW Laser excels in close-range fights, with Frangible – Disabling helping you close the distance on running prey.

Combine Hardline with Specialist to reward your efforts with extra perks that provide a low profile through Ghost, renewed ammo with Scavenger, and Spotter which stacks well with Tracker to help zero in on enemies and their defenses. Double Time helps you outrun or catch the enemy, and Dead Silence gives you the ability to sneak in and get the drop on unsuspecting targets. 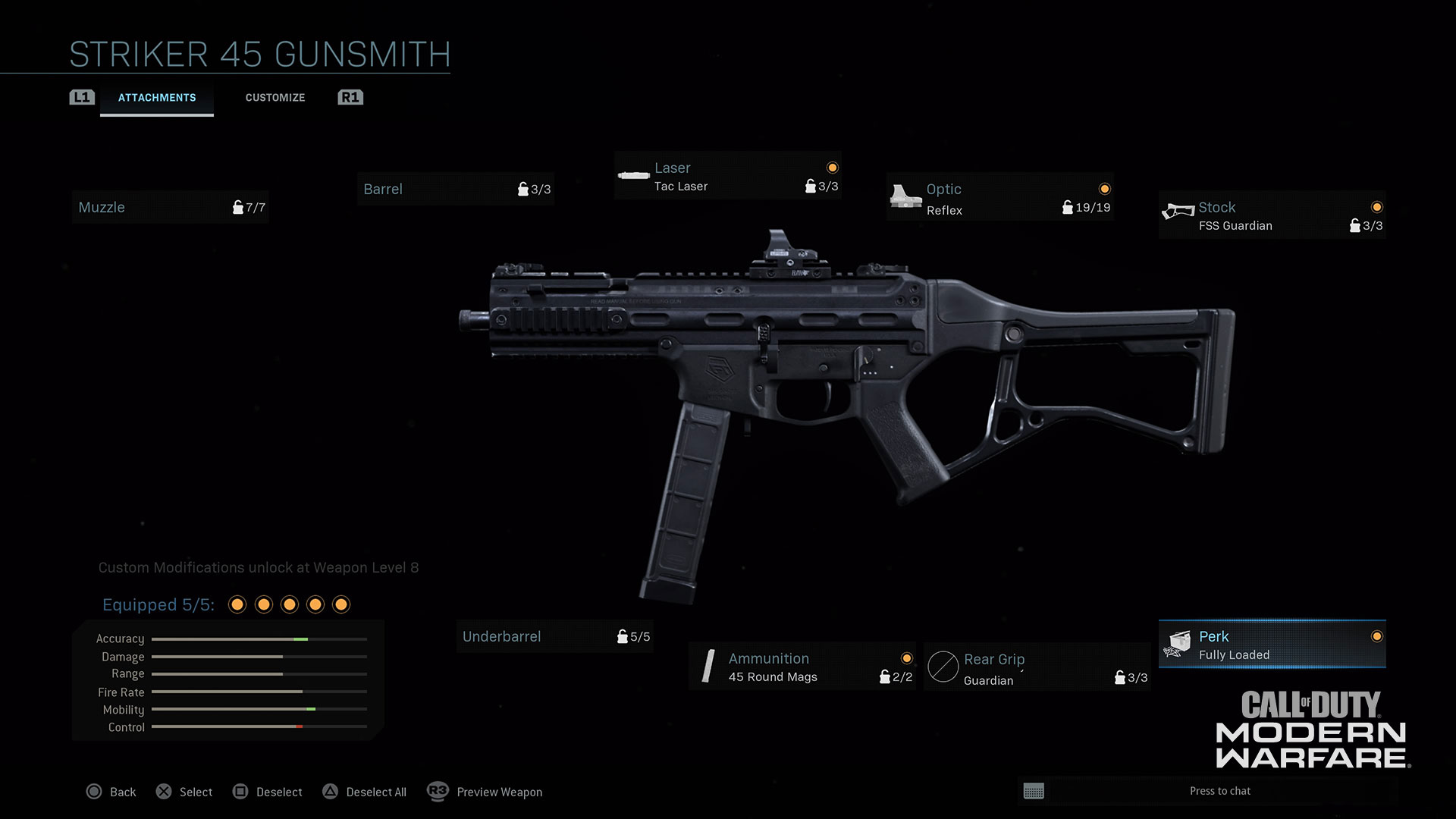 Mobile and deadly, the Runner is a great class for Kill Confirmed and Domination, or in any situation where you need to move fast, be aware, and pump lead without worrying too much about your ammo count. The combination of the Tac Laser, Cronen LP945 Mini Reflex, and FSS Guardian keeps your aiming stable when moving and firing down sights. Fully Loaded with 45 Round Mags means you can lay down suppressive fire when you need to create space or take out a group of enemies without stopping to reload.

Your perk selection grants speed and awareness, plus resistance against tactical grenades, an essential combination for fast movement that doesn’t completely let your guard down. The Personal Radar assists with enemy intel, while the Counter UAV and Sentry Gun work together to scramble the enemy’s intel and lock down vital lanes of movement.

Keep experimenting in Gunsmith with the Striker 45 to find out what work best for you. Master this weapon and your enemies will pray not to find you on the other side of the lobby.