The Oracle must be freed in Delphi. Dive into Ancient Evil to embark on this legendary quest while fighting epic monsters from the Greek mythos.

The Oracle brought our four heroes —Scarlett Rhodes, Diego Necalli, Bruno Delacroix and Stanton Shaw — to the ancient city of Delphi in order to save her.

Here, the Chaos crew must face their toughest trial yet in their search to rescue Alistair Rhodes and stop the High Priest of Chaos.

Welcome to Ancient Evil, the sixth Zombies experience within Call of Duty: Black Ops 4. Here’s what you can expect: 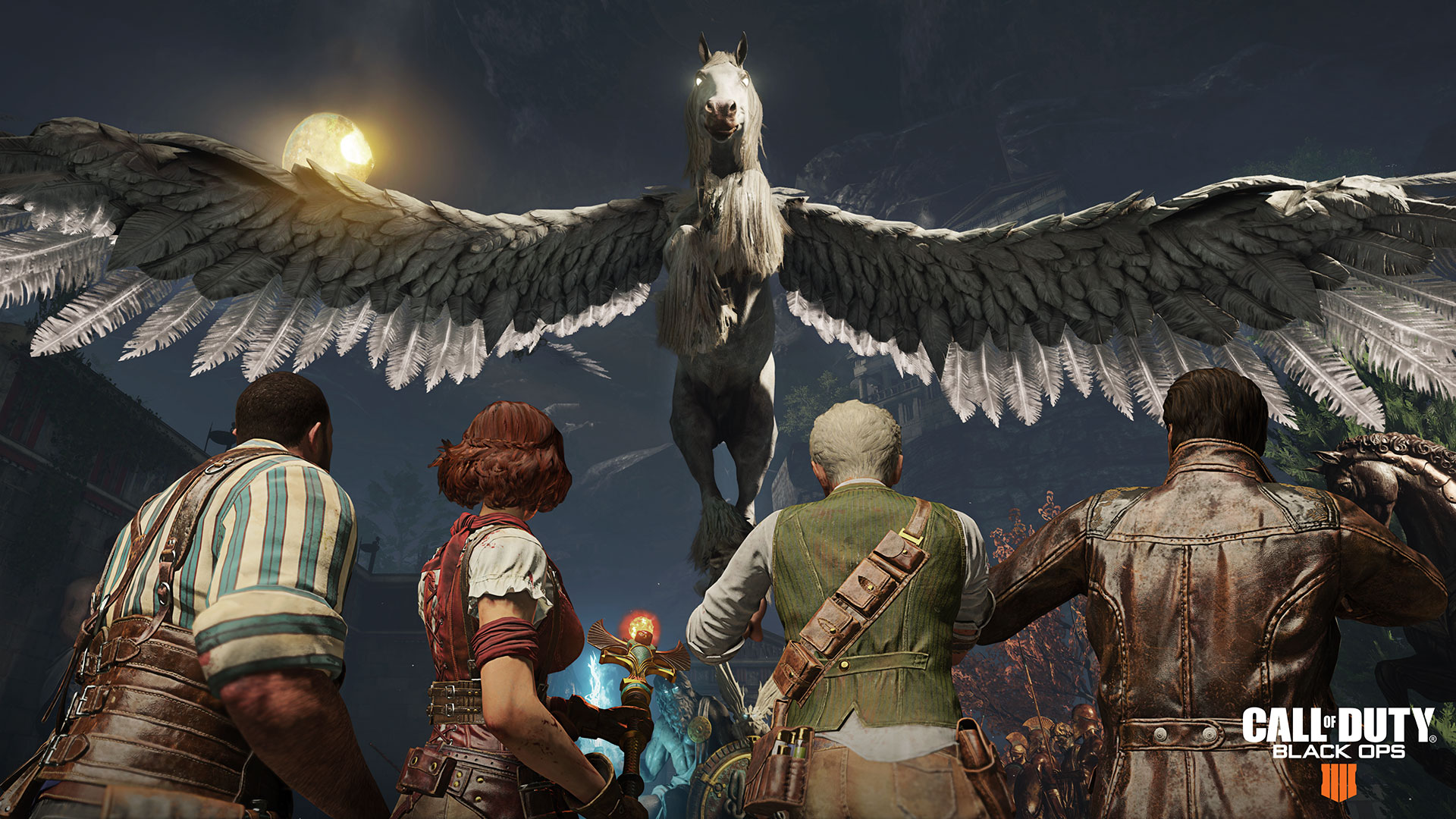 Previously With the Chaos Crew…

It is well worth playing Dead of the Night, Voyage of Despair, then IX before diving into Ancient Evil if you want a greater understanding of the main storyline.

In IX, a trial from the Sentinel Artifact, the code for unlocking a stone door within a cave in Delphi was revealed.

Our intrepid heroes awaken from their hallucination (IX) back in this cave, with the Oracle asking if they found the code to unlocking the stone door.

“Damn right we did,” says Scarlett.

She presses the symbols to reveal the actual ancient city of Delphi. Yes, the real Delphi is underground and not the one we see on the Earth’s surface, as Stanton Shaw explains.

After our crew sees that others have already found the city, they rush to the Oracle who is trapped in the Temple of Apollo. The Oracle uses her energy to hold the zombies back long enough to explain to Scarlett that she, like her father, “is a prisoner.” Before she loses consciousness, she asks our heroes to save her and, once she blacks out, the zombies turn on our crew.

Fun Fact: Delphi was an important religious site in Greek history and was home to the high priestess Pythia, commonly known as the Oracle of Delphi. 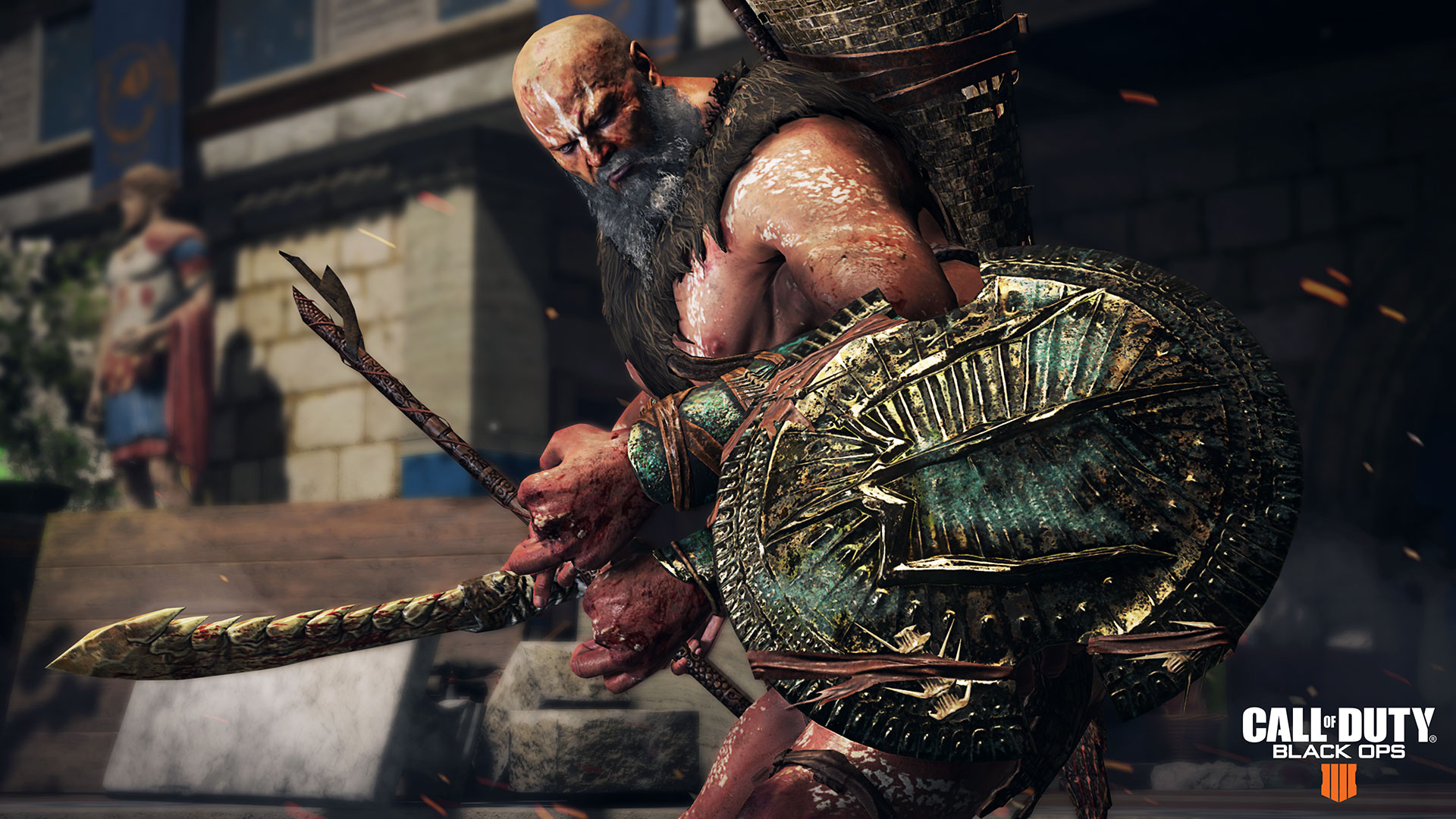 Along with the Ancient Evil experience, the newest Call of Duty: Black Ops 4 brought several new items for use in all Zombies modes.

First and foremost, there is the perk Zombshell perk, which is free and available for all users. Here’s the in-game description of this new perk:

"Basic zombies have a chance to explode when killed, leaving behind a contamination field that slows enemies and increases damage dealt to them."

Zombshell can be a fantastic crowd control perk; when it goes off, the resulting gas causes the undead to dawdle. Combined with a powerful weapon and great aim, a whole slew of enemies can be felled by a few chance explosions.

If used in the modifier (perk four) slot, Zombshell grants extra abilities. While in the gas cloud made from an exploding enemy, zombies will ignore you.

Alongside Zombshell, several elixirs, such as Bullet Boost and Suit Up, and two Talismans — Battered Dragon's Scale and Glowing Phylactery — are available through the Laboratory.

One you might want to try is the Whimsical Quacknarok elixir, which wraps a zombie in a giant inflatable rubber ducky. Technically speaking, there is a Bathhouse in Ancient Evil, so we think those rubber duckies fit right into the map.

Extra Tip: The “Talkin' Bout Regeneration” Elixir, can be useful when you are taking a lot of hits on the move. 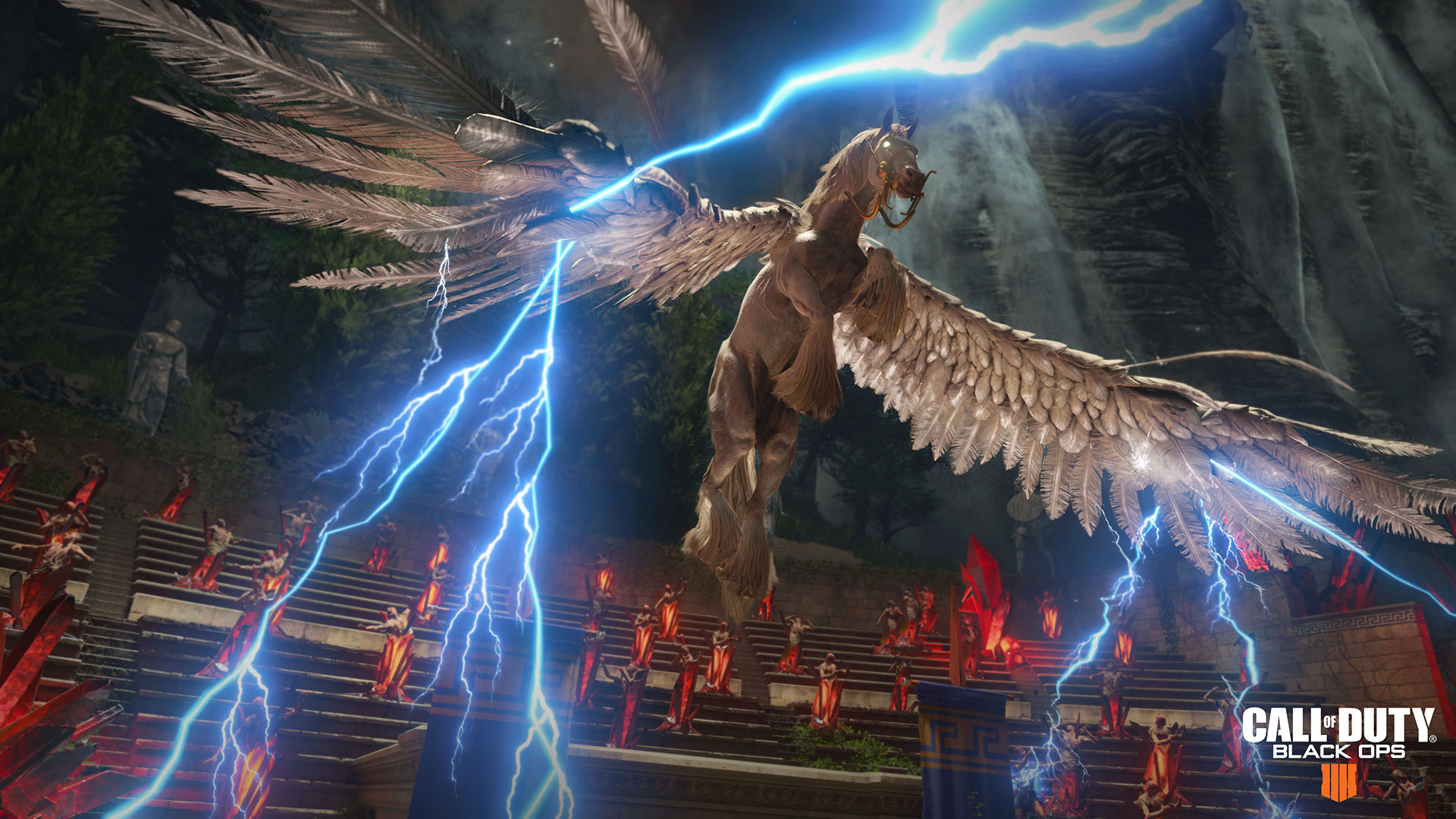 Getting Amped up at the Amphitheater

After you’ve set up those perks, elixirs, talismans, and other Create-a-Class items, it’s off to Delphi.

In Ancient Evil, the Oracle will occasionally drop helpful tips (she can see the future, after all) to aid you in saving her. So, listen while you play to gain some insight over the undead. She will give hints about where to go next and where to find dormant hands ready to be powered up. Also, she will grant boons to players like helping them buy doors, giving them ammo, and revealing craft-able parts.

If playing with a team, coordinate to survive. Work together to eliminate enemies and solve any Easter Eggs. There’s plenty of callbacks to ancient Greek mythology throughout this map, so if you discover any clues or hints share them!

Fun Fact: Ancient Greece was the birthplace of Western theatrical productions. The largest theater of the time was the Greek Theatre of Syracuse, which held up to 15,000 spectators. 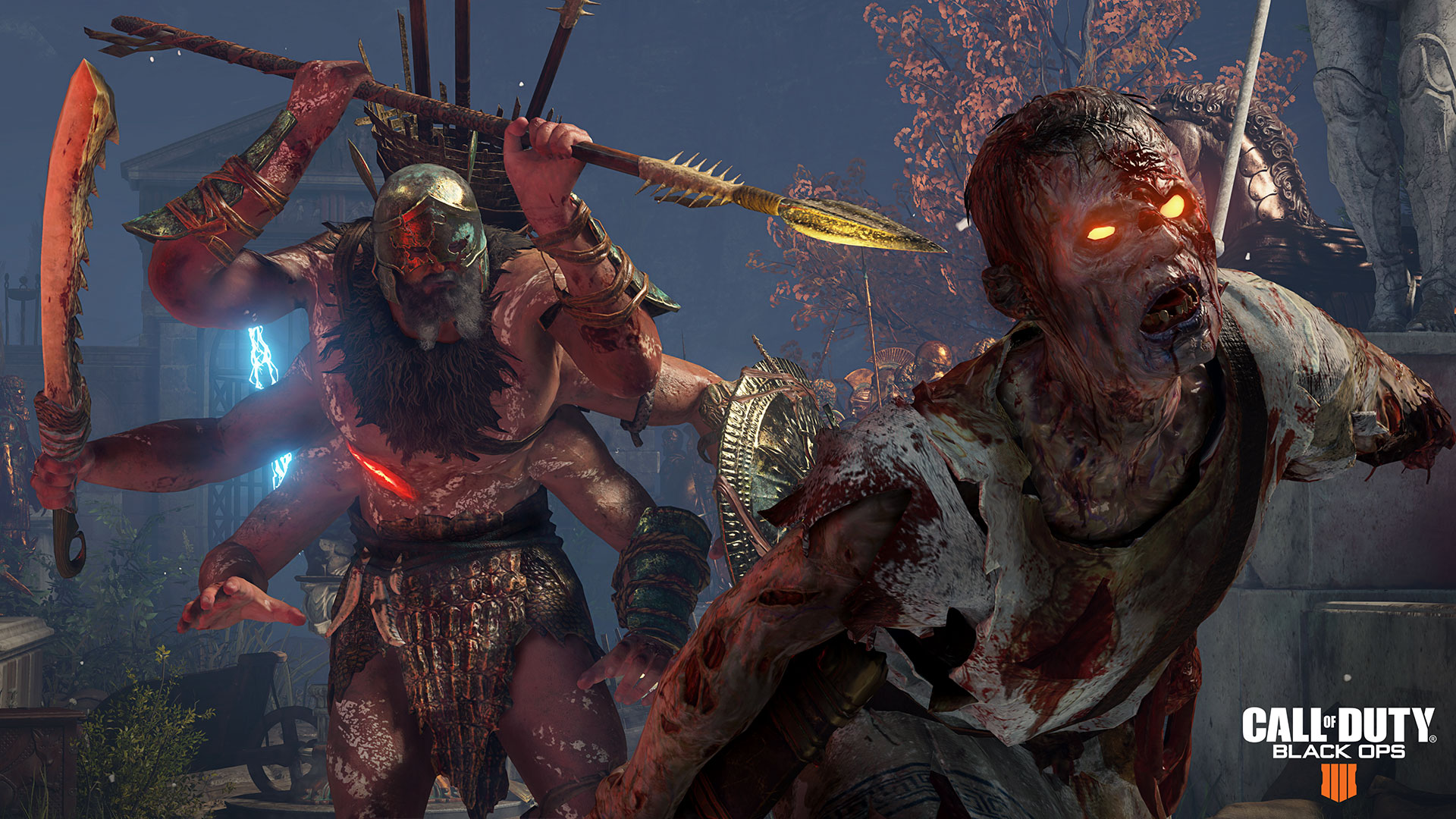 While playing Ancient Evil, you may come across a giant, six-armed undead monster. This is known as the Gegenees, a hostile and deadly creature that comes from the Greek mythos.

The Gengenees in Ancient Evil has three weapons: a sword, shield, and throwing spears.

Like nearly any enemy in Zombies, the most obvious solution to defeating this enemy is a hailstorm of bullets. However, given that the Gegenees is a walking one-man-arsenal, it might be a good to have a tactical approach.

The Gegenees can damage you with any of their three weapons, so do your best to dodge and move. His shield strike can temporarily stun you in place, so when you see him begin to charge up his shield, make sure to avoid the blast.

Fun Fact: In Greek epic poem Argonautica, Jason and the Argonauts landed on an island swarming with the Gegenees. Hercules, who we all know as the son of Zeus and Alcmene, helped fend off the giants alongside the Argonauts. 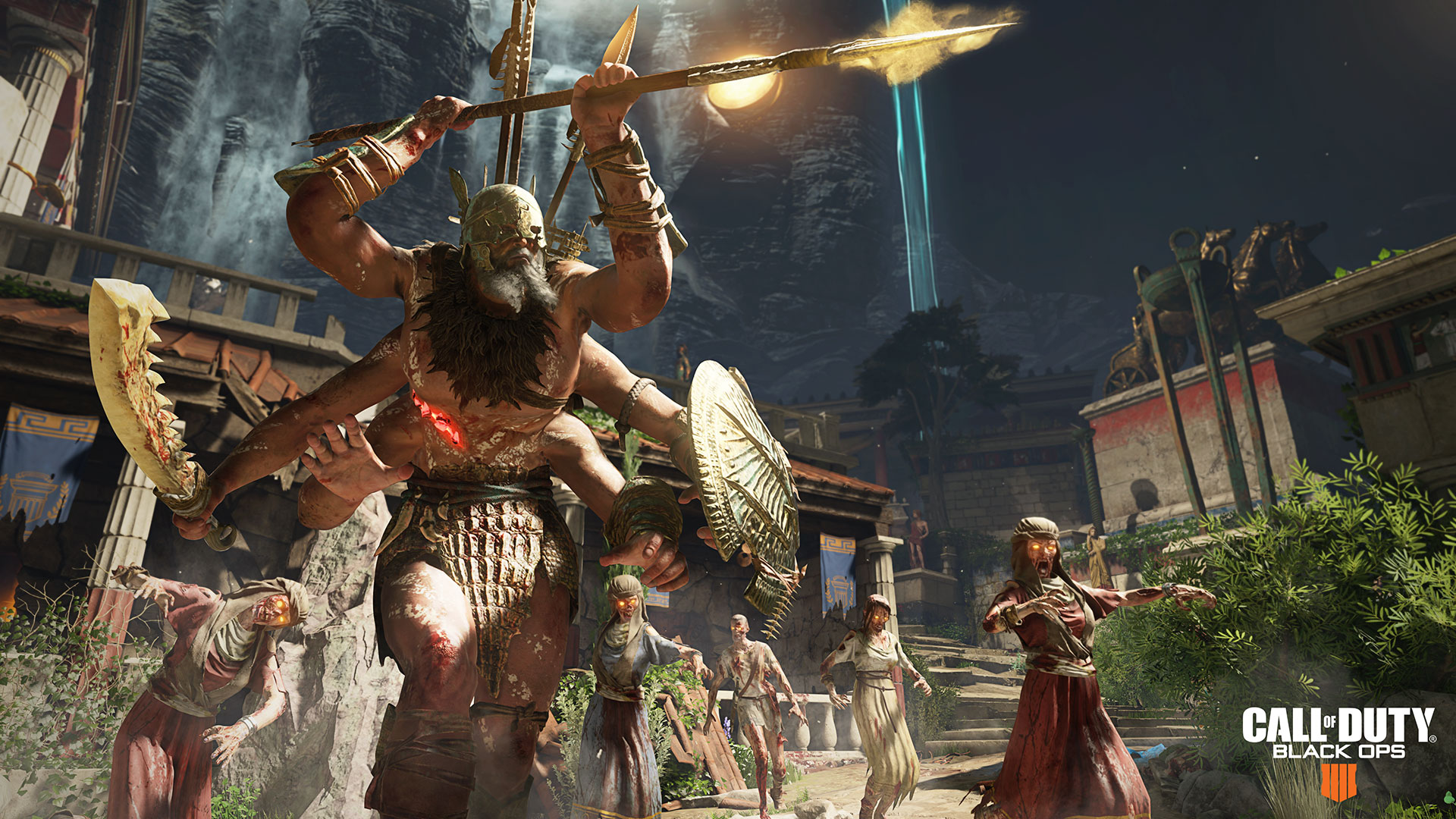 Outside of these map-specific tips, here are a few things to keep in mind when diving into Ancient Evil:

1. Head to the Amphitheatre – The design makes training zombies, or letting zombies chase you in a circle while whittling them down slowly, a possibly effective strategy. If you want to potentially gain a lot of points without opening too many doors, show off your skills in the Amphitheatre.

2. Complete the Tributes – Tributes are cooperative challenges that build up rewards to higher tiers. They are a great way to pack-a-punch weapons earlier or gain extra lives.

3. Craft a loadout that works for you and the map – Viper and Dragon or Scepter of Ra? Acid Bomb or Wraith Fire? Once you’ve played Ancient Evil you will have a feel for the gameplay space and can choose specific equipment, weapons, or elixirs that complement the map and your playstyle.

4. It’s dangerous to go alone! — Bringing a friend (or two or three) into the zombie slaying party is not only more fun, but it’s also more effective for getting into higher rounds and completing the main Easter Egg.

5. Apollo’s Will – If you can find and build the shield, do it! It is a very powerful offensive weapon in addition to a shield. You can hurl explosive spears and take out large groups of zombies with a well-aimed throw.

The Oracle’s Fate is in Your Hands

From here, you’ll have to figure out the rest of how to free the Oracle and defeat Ancient Evil.

Under the guide of the Oracle through the all-knowing god Apollo, we believe in your ability to defeat the zombie Warlord and pass this ultimate trial of skill, will, and survival.

We’ll see you in the true city of Delphi, zombie dwellers.