Out of the Shadows: Avenged Sevenfold Singer M Shadows Talks About Being Both in And into Call of Duty®: Black Ops

The metal band's front-man talks about being in Black Ops 4 and their new EP of Black Ops songs.

While a number of rock bands have had their music appear in the Call of Duty games, none have been as closely associate with the Black Ops series as Avenged Sevenfold. Not only have the metal band recorded new songs for all four installments — which they've collected on the new EP Black Reign — but they briefly appeared in the 2012's Black Ops II, while singer M Shadows was recently added as a playable character in Black Ops 4's Blackout mode. Treyarch even hid some Sevenfold-related Easter eggs in one of the new Blackout maps.

We recently spoke to Shadows about how they first got involved in this shooter series, and how his love of the game helped him in his time of need.

Activision Games Blog (AGB): One of your earliest collaborations with Treyarch was the song "Not Ready to Die," which was not only featured in the Zombies mode map "Call of the Dead" in the first Black Ops, but also featured in a sample of the song "Damned" that Kevin Sherwood had written for the game's score. How did you end up writing that song for the game?

M Shadows (MS): I grew up playing games but had kind of fallen out of it for a while. But when our drummer [Jimmy "The Rev" Sullivan] passed away [in 2009] ... it was devastating. I didn't want to leave house; I thought the world was ending. Well, some friends came over and were like, "Hey, we should play some Modern Warfare 2." I found a lot of solace and comfort in gaming. It was good to be able to play with people online and not have to talk about what I'd gone through. This got me back into video games.

When Black Ops was coming out, we were getting ready to go on tour and put our lives back in order, and I was like, "Man, I'd really love to meet some of the people over there." When we did, they asked if they could use one of our songs for a trailer and ended up using our song "Welcome to the Family" [from their fifth album, Nightmare] in a trailer.

Later, they asked us if we wanted to do a song for DLC map for Zombies. This was the first time we'd ever written a song for something specifically [for the game], and we had a blast doing it.

AGB: "Not Ready to Die" was not only written for the "Call of the Dead" map, you also wrote it about Black Ops. When you wrote the song, had you seen any of that map in action?

MS: I actually went to their offices and the Zombies team gave me documents and documents full of lore, flash drives full of background and who the celebrity characters were going to be, so I could really write something that was dialed in to the Zombies lore.

AGB: You next recorded "Carry On" for Black Ops II, and the band also appeared in the game. When you were working on that aspect of the game, did you ask if they could also make you playable characters?

MS: We talked about a couple things. And actually, I think our being in that game is what sparked me being in the new one. Ever since then, people have been asking for it. That and the fact that every time I'd see someone ask online, I would forward it to Mark and say, "C'mon, man, we're ready" is why I think it happened.

MS: We were actually in the middle of recording our album The Stage but were still figuring out what that album was going to be. We also knew we couldn't top what we'd done for Black Ops II, so I just called up some of the guys on the Multiplayer team and asked them if we could take a stab at writing the music for Multiplayer, and they ended up using what we sent them. So, it wasn't written as a song [with vocals. It was always an instrumental].

AGB: Which brings us to "Mad Hatter," which is not only in Black Ops 4, but also prompted you to put together an EP of all these songs called Black Reign. Why did you decide to collect these songs now as opposed to waiting until a future Call of Duty: Black Ops, when you'd have enough for a full album?

MS: Because we live in a digital world and we can always add to it. In fact, I'd be okay if, at some point, we swap out the versions of those songs for different mixes of them. We can't do that for the version that's out on vinyl, obviously, but we could for the digital one. 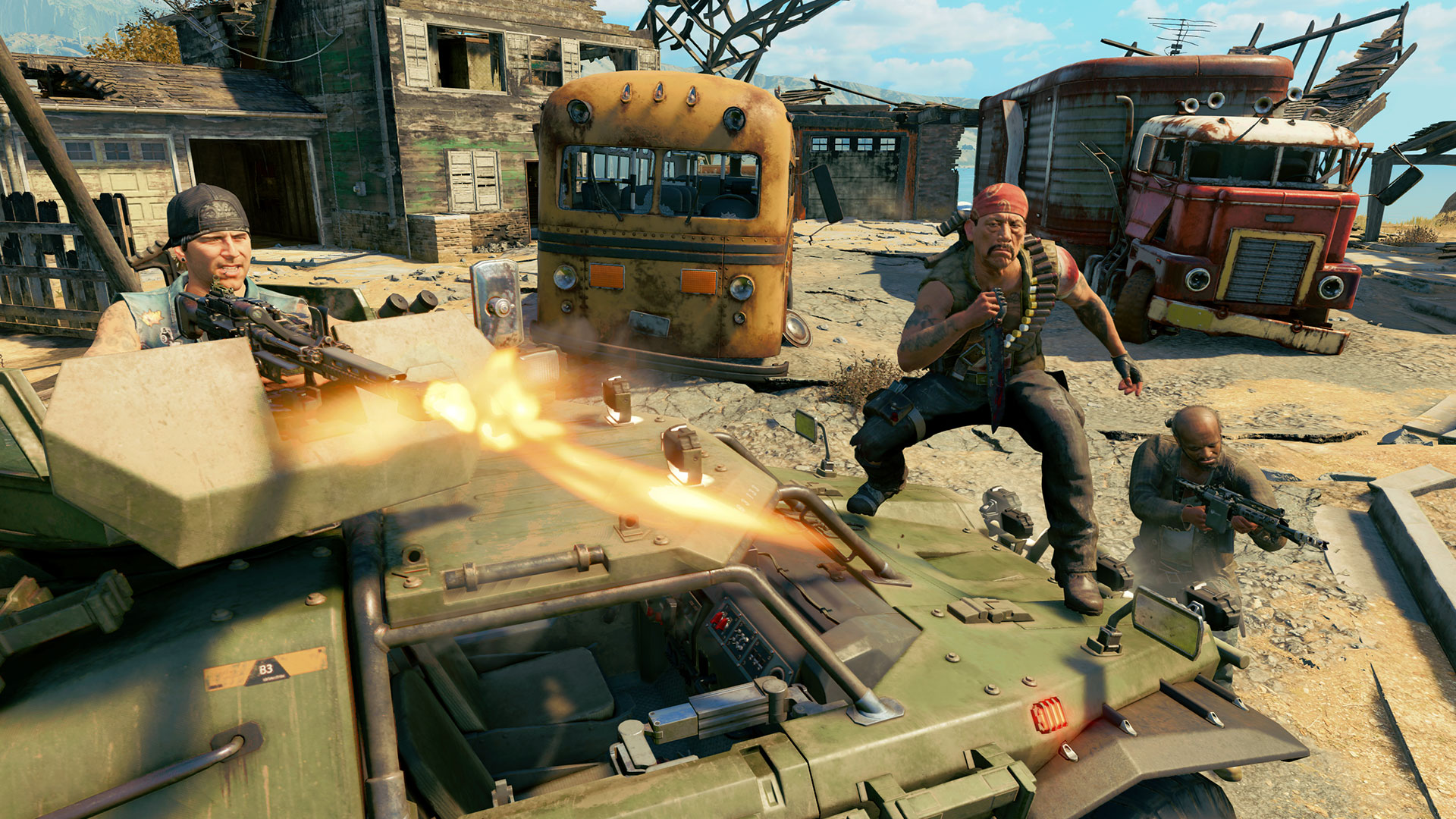 AGB: Along with "Mad Hatter," you are also a playable character in Blackout. Did you have to go get scanned and photographed for this, or did they just use what they had from when you were in Black Ops II?

MS: We re-did it. The technology has gotten better, and I also had to do all the facial stuff. When you slide, your face changes, and we didn't have all that stuff when we did Black Ops II. I also had to do some voiceovers.

AGB: Did you have any input in what your character does in terms of their abilities?

MS: No, things like your emotes are the same for everyone. But I did write a bunch of my own lines. When I play, I get super sarcastic and snarky, so they let me write some of my own lines. I'm also the only character with tattoos; you see the tattoos on my arms when you play.

AGB: Are you at all worried that your bandmates might use this as an excuse to kick you out of the band and replace you with a hologram?

MS: I'm cool with that. I'm all about staying home and playing games.

AGB: So who is the best Black Ops player in the band?

AGB: And would they agree with that?

MS: Absolutely. When we go on tour, I have my own gaming rig in my room, and they have theirs in another, and it's just a sorry sight in there.

AGB: I'm guessing then that you don't use the game to solve disagreements?

MS: No, absolutely not.

AGB: And was being a Call of Duty player a requirement when you were looking for a new drummer a couple years ago? Is that why Brooks Wackerman made the cut?

MS: He's not allowed to play games, it cuts into my bandwidth. No, I'm just kidding. He actually doesn't play games. But his kids do. I think I'm more of an icon to the kids because of Call of Duty than I am because of the band.

AGB: So, aside from Black Reign, what else are you working on?

Activision Games Blog would like to thank M. Shadows for taking the time out of his busy schedule to speak with us.