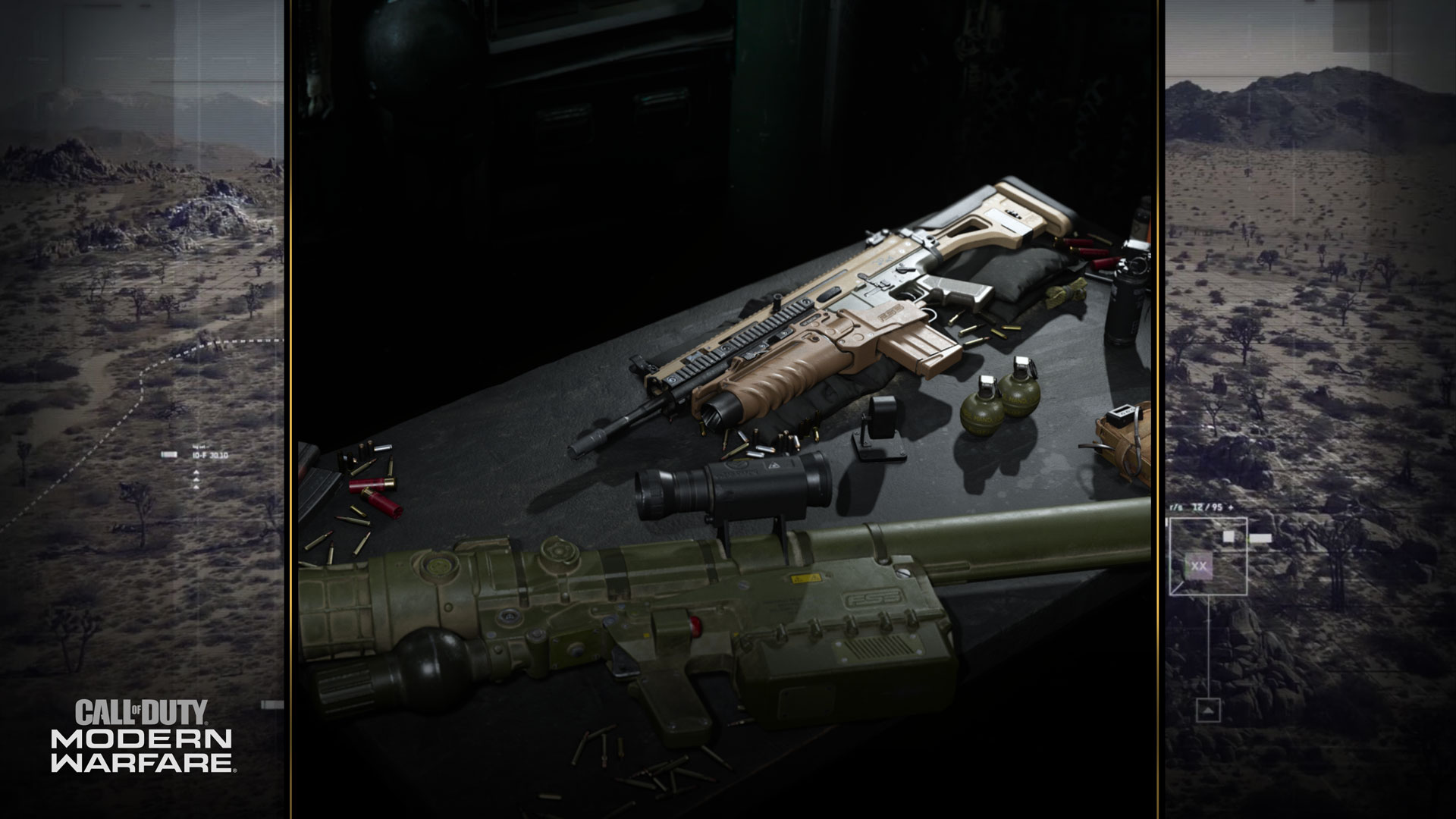 Five Loadouts to Try in Call of Duty®: Modern Warfare®

Need some inspiration for crafting your next loadout? Here are five unique loadouts we’ve been using since launch.

Five Loadouts to Try in Call of Duty®: Modern Warfare®

Need some inspiration for crafting your next loadout? Here are five unique loadouts we’ve been using since launch.

There are near-limitless loadout options within Modern Warfare, as the vast array of weapons, perks, and equipment – not to mention all the attachments that can be equipped in Gunsmith – are enough to overstock an entire arsenal. You may have already experimented with a few loadouts or took some advice from around the community.

If not, or if you’re looking for more ideas to fill out those Loadout slots, we have a few unique ones for your consideration. These won’t have a full list of attachments, rather some key attachments that complement the loadout’s intent.

Here are five loadouts straight from the trenches: 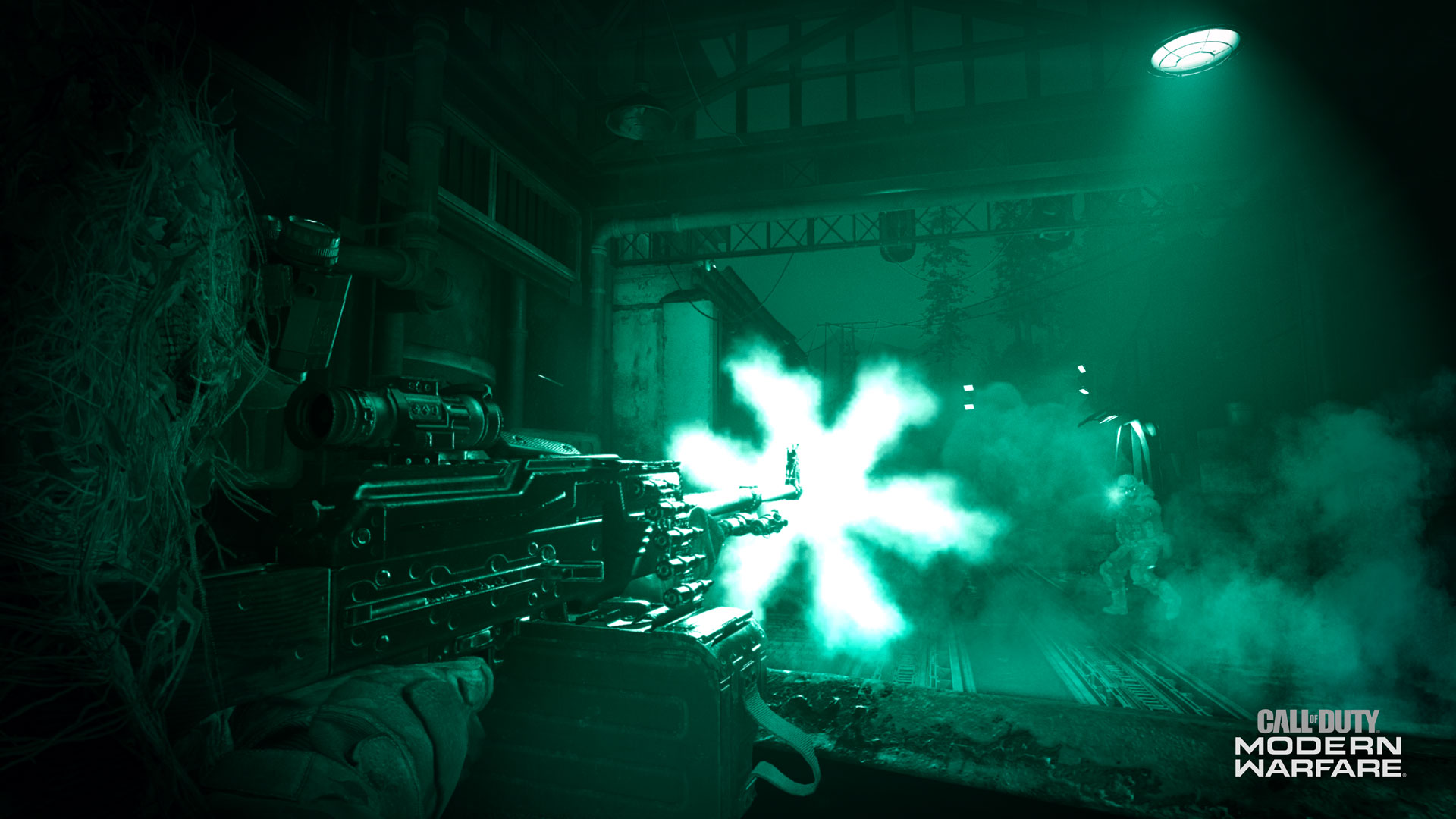 Primary: Any Sniper or Marksman Rifle with a Thermal Scope

This loadout provides you strength at extreme range engagements.

For long range, taking a sniper or marksman rifle is a great tool for long distance fights, and a Thermal scope ensures visibility, even through Smoke Grenades. In addition, Proximity Mines may help if you need protection from flanking enemies while you are sharpshooting.

For close range, thanks to the Overkill perk you can equip a shotgun as your secondary, a weapon that excels at close-range engagements. Those who want a bit more range can outfit their shotgun with Slug Rounds, which packs the full power of a blast into one deadly shot rather than multiple pellets.

Rounding out the perks are Kill Chain, which makes all your Killstreak kills count towards earning your next streak, and High Alert, which will give you a visual cue when your Operator is being targeted by an enemy off-screen.

This loadout is for those who want to be the unsung hero of any team by playing the objective and taking out enemy Killstreaks.

Unlike most loadouts the primary weapon isn’t the star, as your greatest strengths will lie in being a utility player. That makes your secondary weapon, a launcher that handles enemy Killstreaks and equipment, the real hero. Pay attention to alerts and visual cues from the Spotter perk to detect when enemy Killstreaks are going live. Check the skies and take Killstreaks down.

If you equip the Pointman perk, you’ll turn Killstreaks into Scorestreaks. Taking down Killstreaks, as well as playing objectives, will award score alongside getting kills and helping teammates in various ways making your potential to get streaks very high.

Another big way to earn score is through capturing objectives, which may be easier with the help of Quick Fix. The health regeneration buff while capturing and holding objectives might be the difference between life and death.

As for your lethal and tactical equipment, they may help defend and scope out objectives respectively. A well-placed C4 could cut off lanes to objectives, while Snapshot Grenades can alert you and your teammates to nearby enemies. 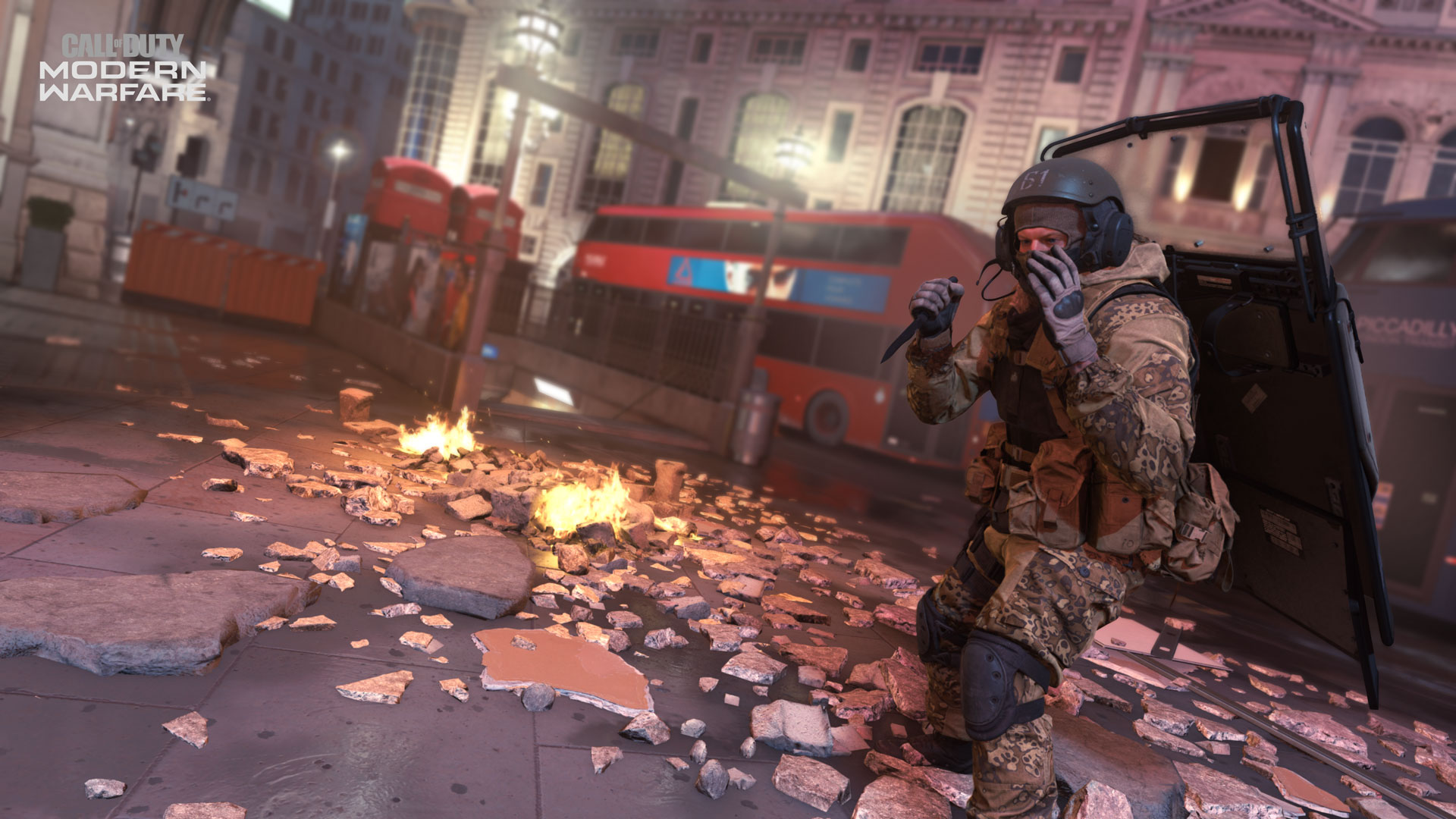 This loadout takes the phrase “bringing a knife to a gunfight” literally. The Riot Shield and Combat Knife are the lone melee weapons in the primary and secondary weapon slots, with the former being able to deflect bullets and the latter allowing for one hit kills.

Because this loadout is at its most lethal in extreme close quarters, the strategy behind our perk selection is getting you as close to the enemy as possible. Double Time increases the duration of Tactical Sprint, the fastest non-vehicle movement speed in the game, Ghost shields you from intel gathering Killstreaks like UAVs, and Tracker allows you to see where enemies have travelled recently thorough their footprints.

Once you get to an enemy, you can either use the Riot Shield, Combat Knife, or chuck a Throwing Knife for a quick kill. Then, whether you’ve taken damage or want to get out quick, the Stim will recharge that Tactical Sprint and max out your health, making you ready for the next engagement.

Primary:M13 with .300 Blackout Ammunition, any Suppressor

Secondary:Any Pistol with a Suppressor

The name of this loadout’s game is maintaining a low profile.

For stealth infiltrations, it may be wise to take a primary and secondary that can outfit a Suppressor attachment, keeping in mind the various drawbacks to different Suppressors. However, the M13 is the only weapon with Blackout rounds, a unique subsonic ammunition type that shows no visible tracers on projectiles, nor enemy skulls whenever it takes down a hostile target.

With that in mind, our stealth class uses the M13, paired with a silenced pistol, and takes three perks that revolve around covert gameplay. Cold-Blooded shields you from AI targeting systems and Thermal optics, Ghost shrouds you from UAVs and other intel gathering devices, and Tune Up reduces Field Upgrade charge time by a third… From there, consider Dead Silence, the ultimate stealth Field Upgrade, to become a complete clandestine Operator.

This loadout’s equipment pairs the one-shot silent takedown potential of the Throwing Knife with the Decoy Grenade, a unique tactical that simulates fake gunfire and radar hits that may potentially confuse your opponent. 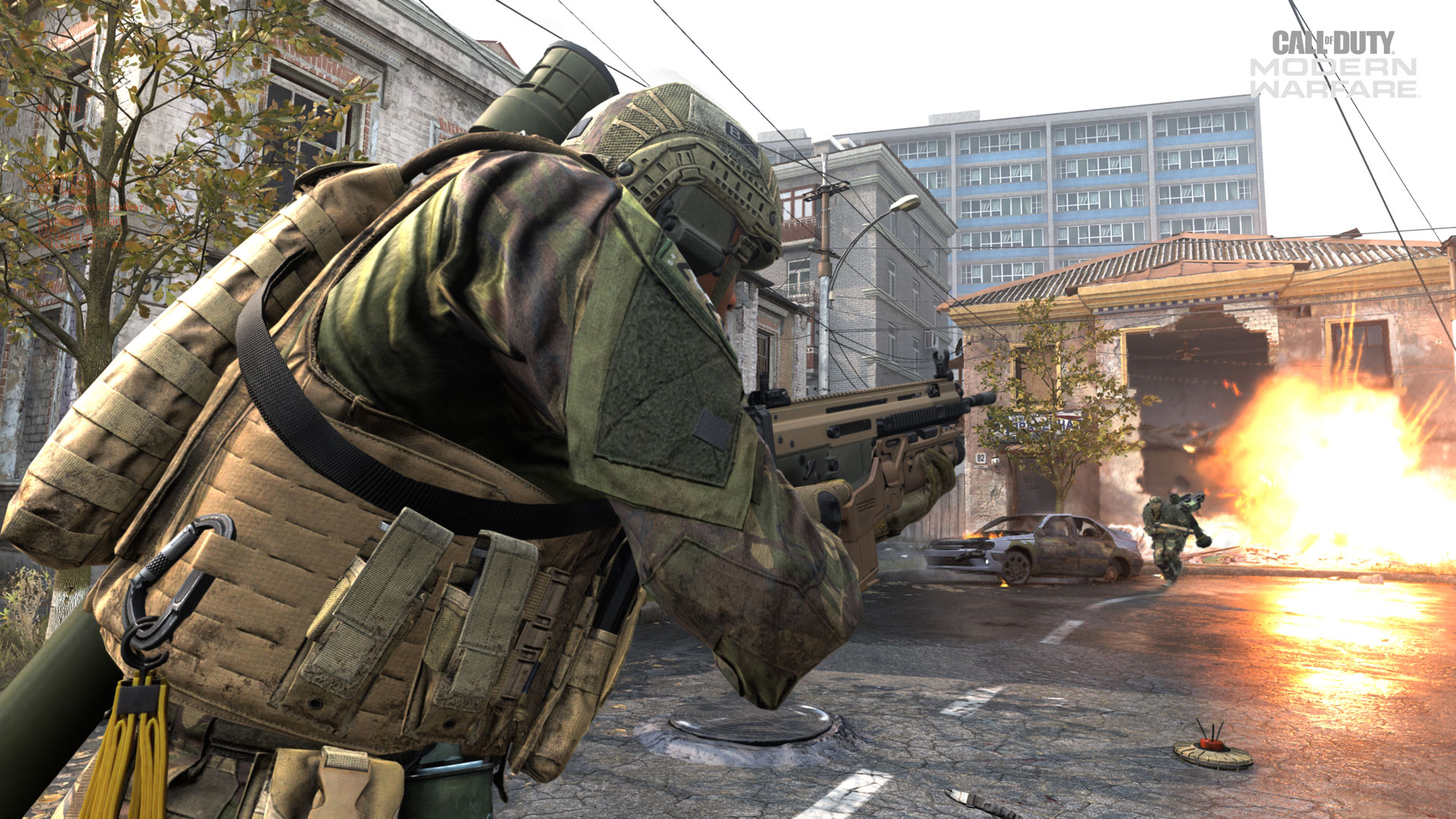 Primary: Any Assault Rifle with an 40mm High-Explosive Underbarrel Attachment

This loadout may have quite the explosive impact in your next game.

An underbarrel Grenade Launcher on any assault rifle and an RPG-7 as a secondary maximizes the explosive potential of any Operator. Couple that with Claymores, and you have plenty of options to make things go boom.

E.O.D. helps temper the damage from your own explosions, should they get too close to you for comfort, while Restock will give you a steady supply of Claymores during the match. Then there is Shrapnel, a near-essential perk for destruction-oriented loadouts such as this because it buffs all explosive damage you deal.

As for Stim, it comes in handy should your Operator grow weary from the constant explosions going off. Plus, that refresh of Tactical Sprint may help you get to the next location you want to make into a crater of its former self.

No matter how you craft your loadouts, we hope these have at least sparked a bit of inspiration for your Multiplayer arsenal.