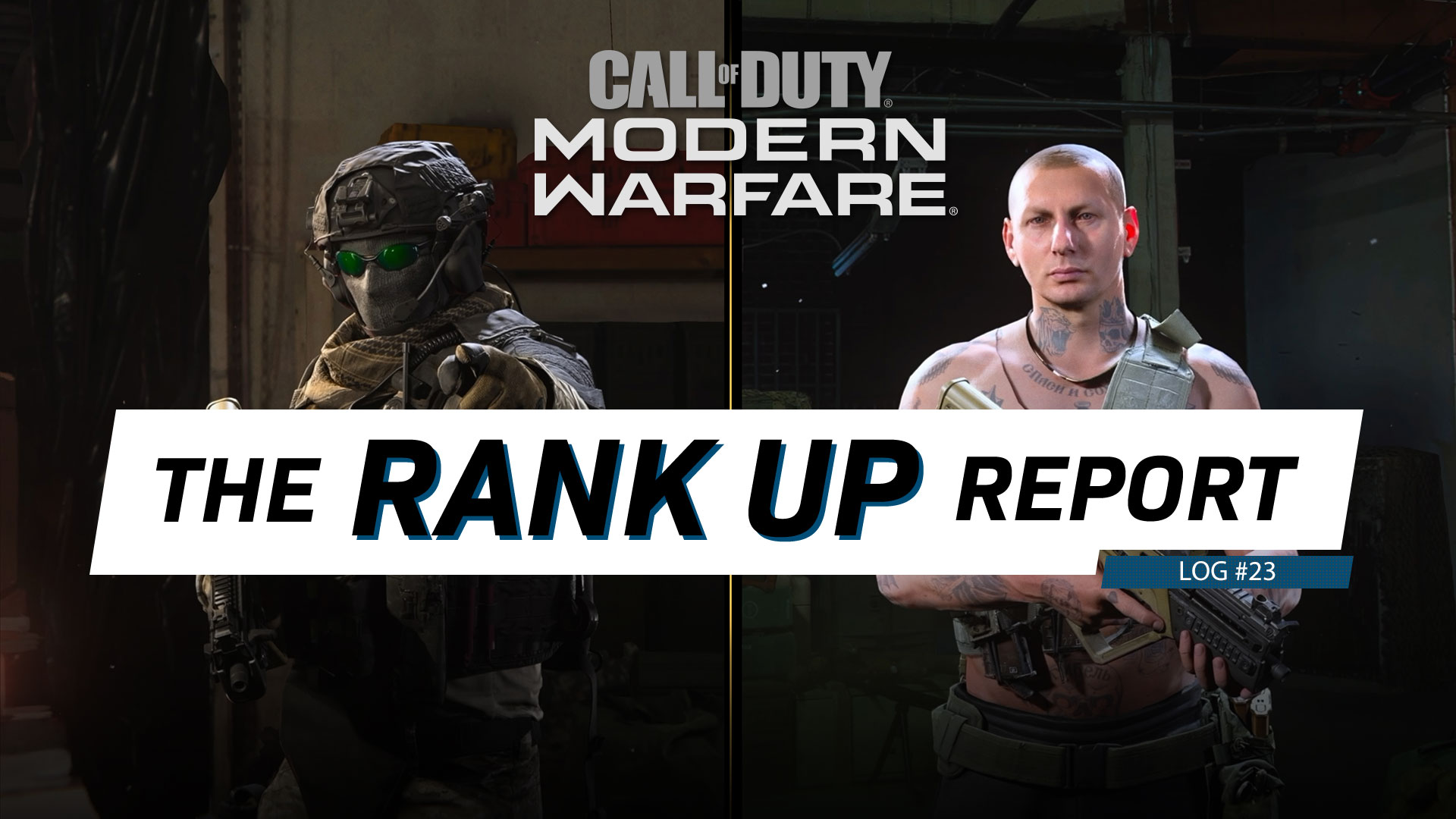 Our Lead Writer showcases a ton of what Season Three brought to Modern Warfare® – including Warzone – as well as some quick tips for ranking up and getting up the Battle Pass quickly.

Our Lead Writer showcases a ton of what Season Three brought to Modern Warfare® – including Warzone – as well as some quick tips for ranking up and getting up the Battle Pass quickly.

As someone who played through the Call of Duty: Modern Warfare Campaign when the game launched all the way back in September – on Realism difficulty no less – the return of Alex, my featured Coalition Operator this week, was an absolute shock.

Yes, the “backup” that Ghost requested was indeed Alex, who returns to combat with a prosthetic leg, which is there most likely due to the events of the Campaign. Alex’s return as a playable Operator for Multiplayer, Special Ops, and Warzone is just an all-around welcome one for me, especially with his awesome Finishing Move. 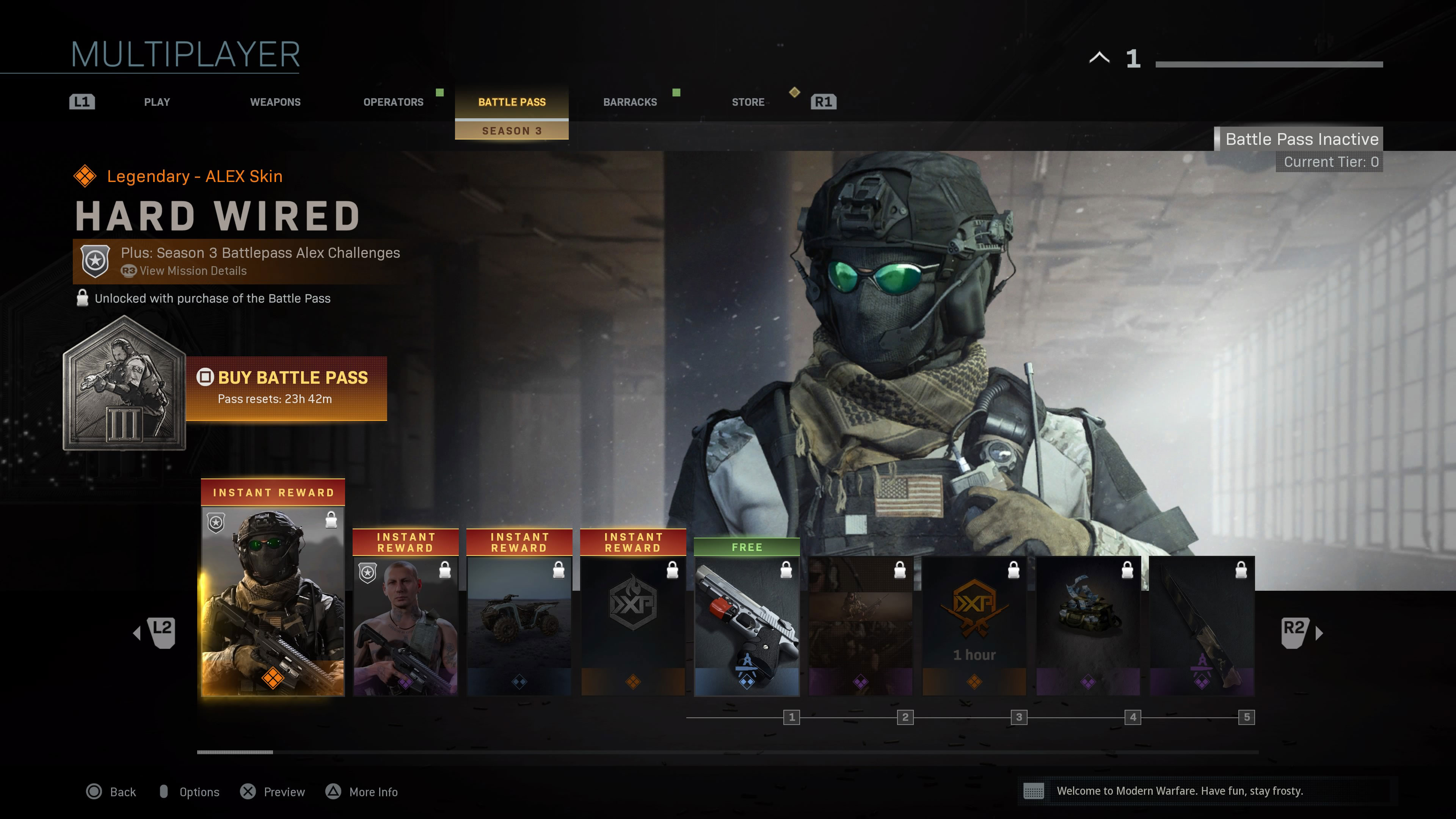 You can unlock Alex by purchasing the Battle Pass for 1,000 Call of Duty Points, and get a lot more with these three other immediate unlocks:

First is the Season XP Boost, a global percentage boost of all XP earned during the Season. That boost is a passive effect, giving you even more XP during active XP Tokens or Double XP events.

If I had to give one major tip for ranking up quickly, it’s to take advantage of this boost from the Battle Pass and skyrocket up those ranks with that Season XP Boost. 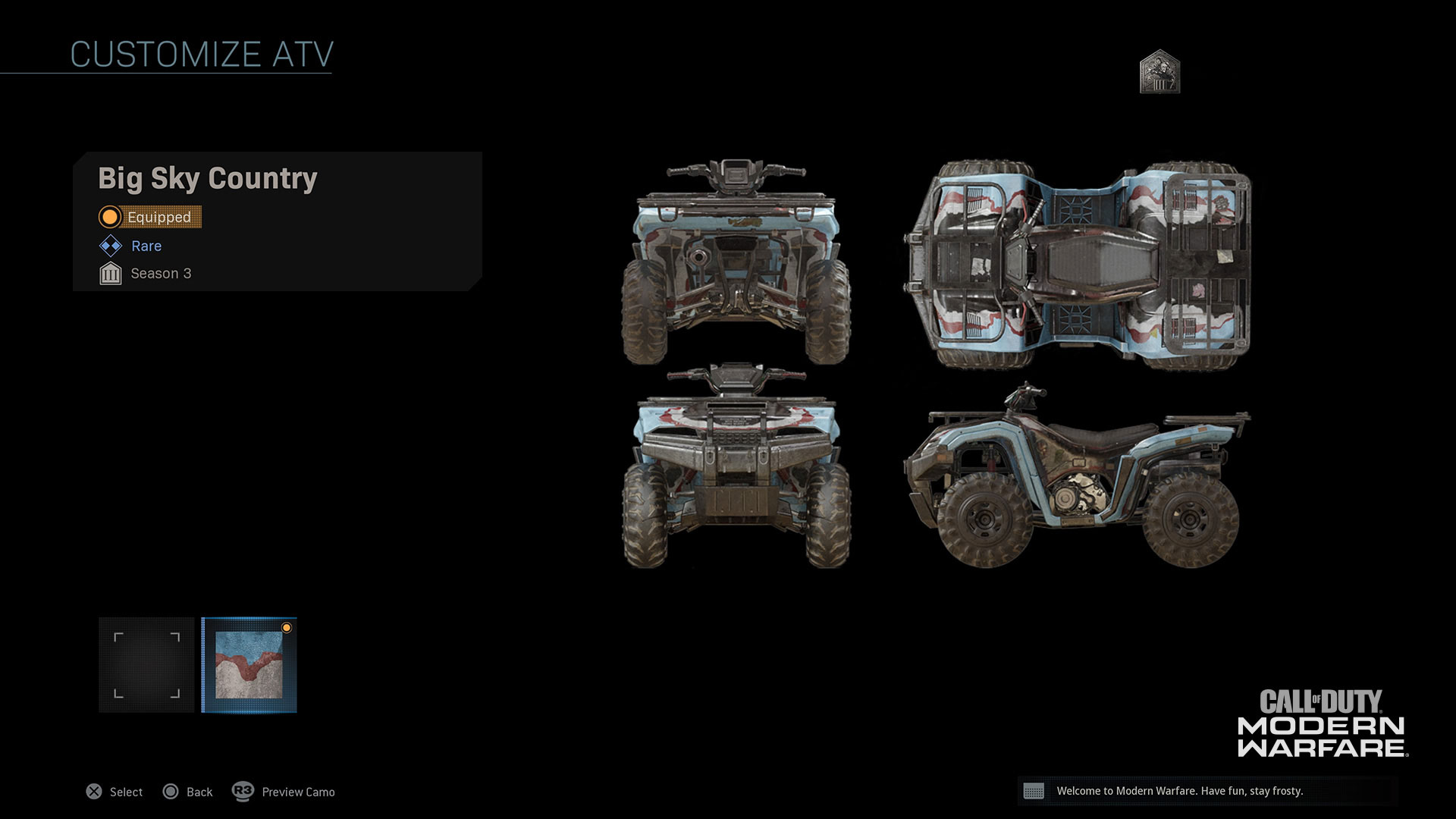 Next is the ‘Blue Sky Country’ vehicle skin for the ATV. What are vehicle skins you ask? Only the newest way to trick out your ride in the Warzone, Ground War, or Special Ops.

Available only in the Season Three Battle Pass – for now, that is – you can customize the five main drivable vehicles, which are the ATV, Tactical Rover, SUV, Cargo Truck, and Helicopter, with awesome looking skins. This submenu lives within the Weapons section of the Warzone, Multiplayer, or Co-Op menu, as you can see below. 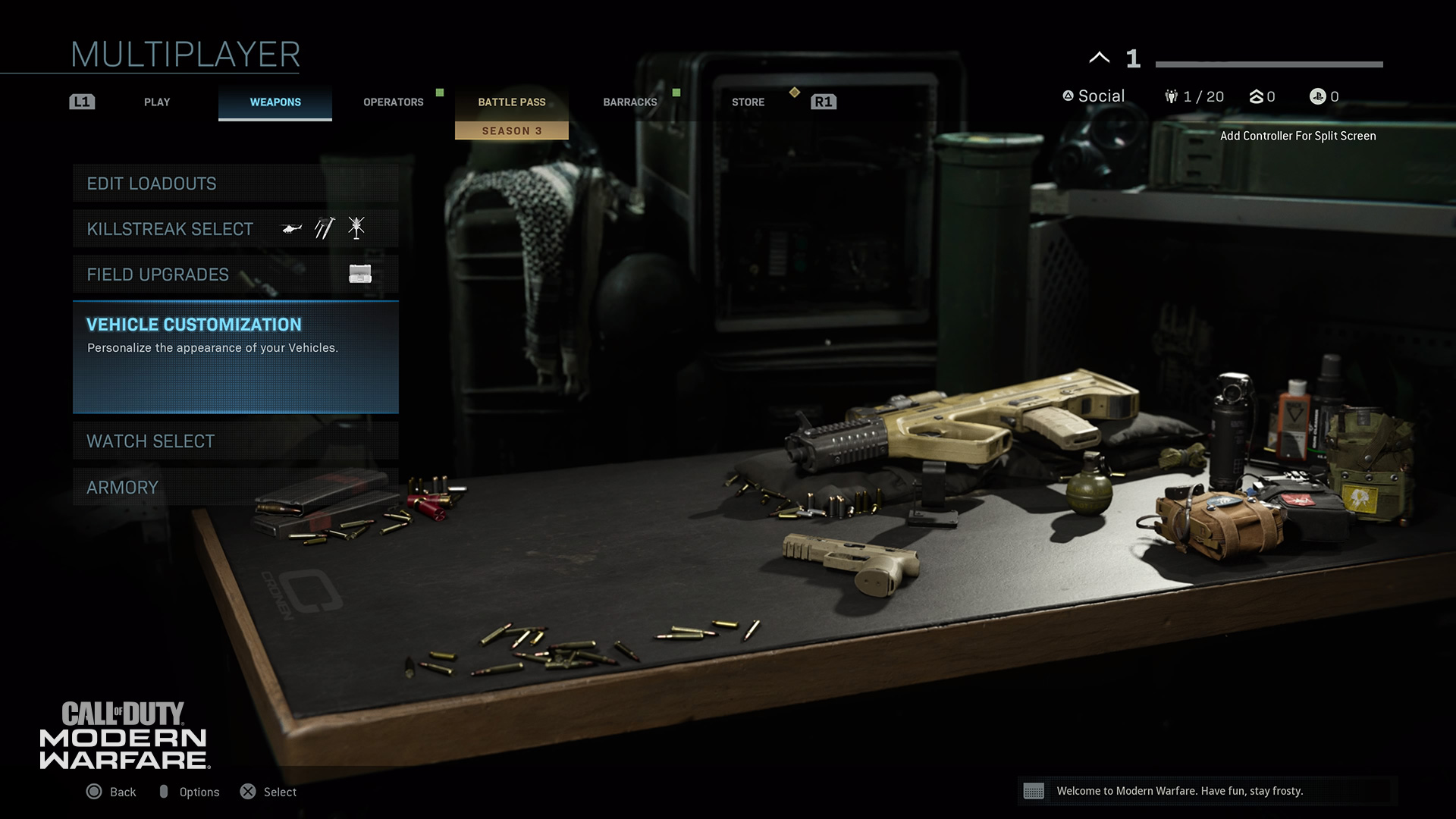 Last, but certainly not least, the real reason why I bought the Season Three Battle Pass. As readers of the Rank Up Report know, I make my fandom for Yegor, the man of nightlife and excess that is a part of the Allegiance. Well, the fourth instant unlock of the Season Three Battle Pass is a Yegor skin, and by Yegor skin, I really mean Yegor’s skin. 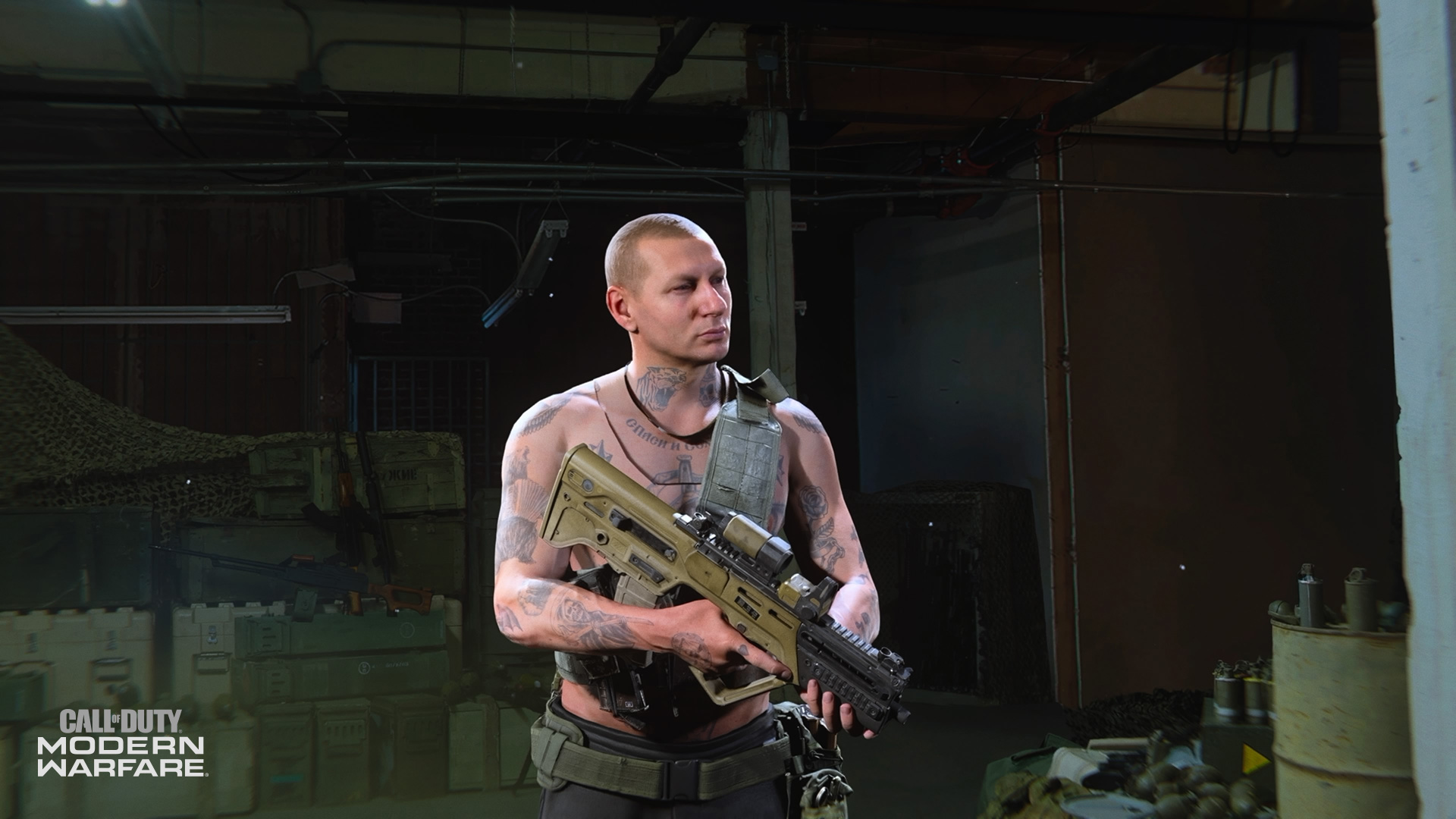 Yes, Yegor and all of his tattooed glory can be yours just by purchasing the Battle Pass, along with those other three items (Alex, Season XP Boost, and ATV vehicle skin) plus Operator Missions for Yegor and Alex.

The weapons that these two fine gentlemen are holding is the Sandstorm weapon blueprint, unlocked at Tier 8. 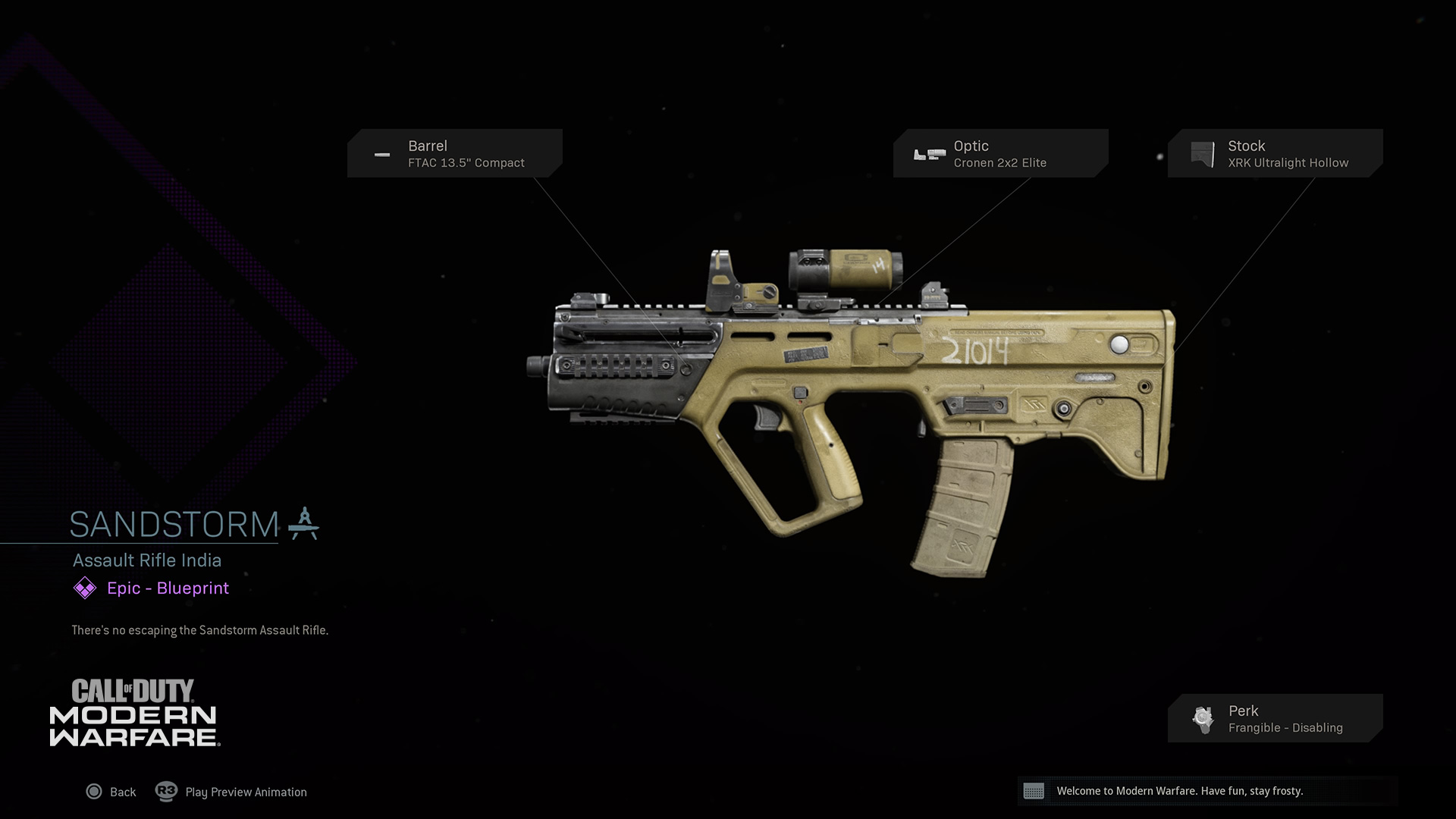 This blueprint of the RAM-7 assault rifle covers a ton of situations that this versatile weapon can fit into. The Compact Barrel makes for a faster aim down sight speed, which helps with the Cronen 2x2 Elite giving a slight debuff to ADS. What it takes away in aiming speed it delivers in a precision sight picture, as well as a zoomed scope for picking off enemies at range.

Taking those ranged shots could help you limit your opponent’s movement speed thanks to the Frangible – Disabling Perk, and the XRK Ultralight Hollow Stock makes you walk faster while aiming down sights.

In all, this weapon will be your savior in short to mid-ranges, as well as give you the chance to fire a few warning shots down range to slow down your enemy.

I’ve been using this weapon as I’m climbing up the tiers to earn the Renetti pistol and the awesome-looking SKS marksman rifle, both available free in the Battle Pass system. I’m seriously excited to get the SKS, as I’m a huge fan of the marksman rifle class and it looks to be yet another strong choice in that deep pool of weapons.

How am I climbing those Tiers and ranking up quickly? Here are a couple of tips I have: 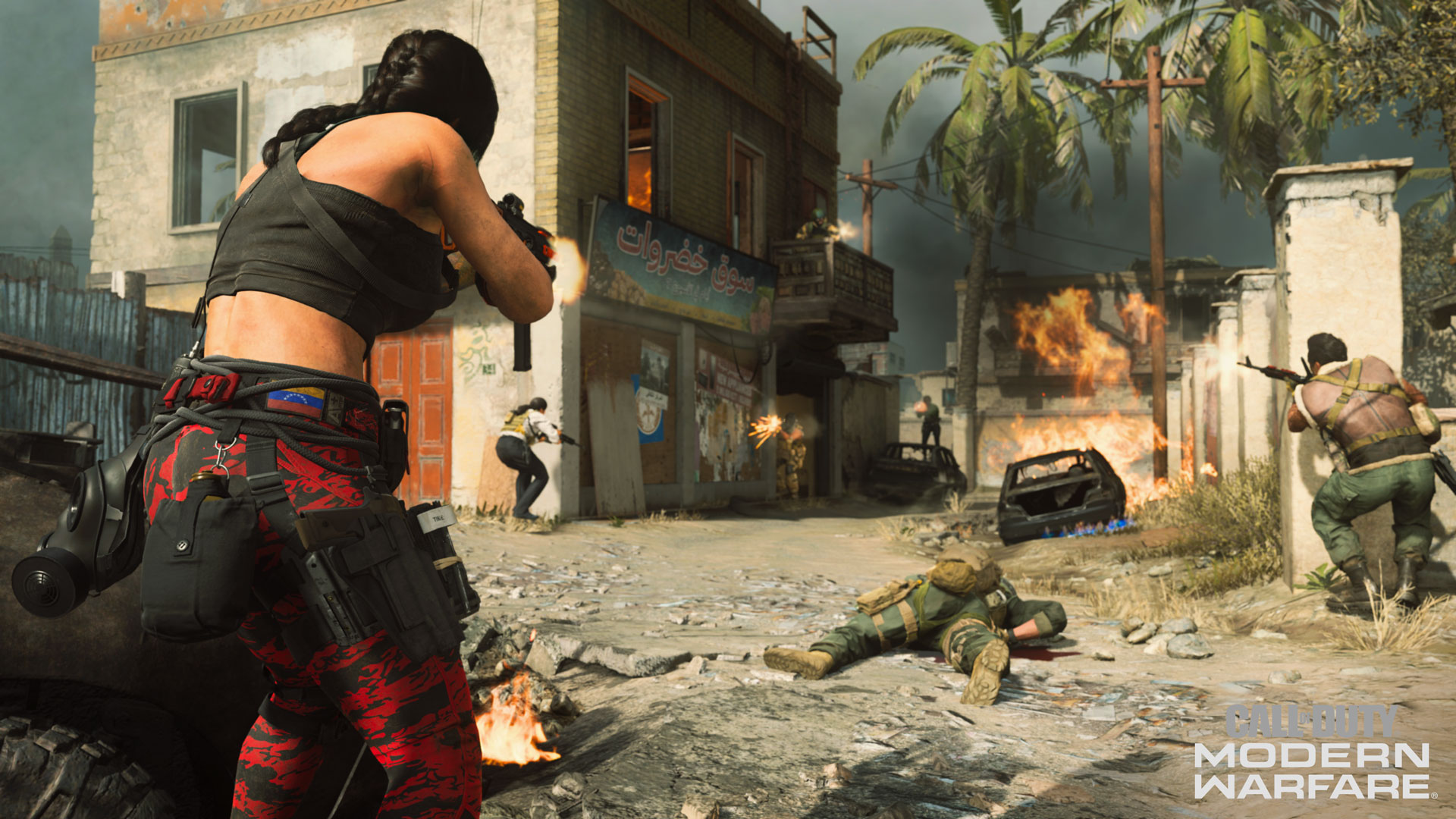 ·      Try Out New Season Three Content and Play the Game. With a few new maps such as Talsik Backlot, a remake of the Call of Duty 4: Modern Warfare classic locale, and Hovec Sawmill, as well as a new Warzone game mode in Quads, there are definitely a few new ways to get those tiers and ranks up. Just play the game, and you’ll get rewarded in no time.

·      Season Three XP Boost. As I mentioned before, ranking up is a bit easier when you have the XP Boost that comes built into the Battle Pass. Pick it up and get on another level of gaining that sweet, sweet XP.

·      Challenges, Missions, and More. Remember to visit the Barracks before hopping into a game to see the new Missions and Officer Rank Challenges. The rewards that come with them on top of a boatload of XP are too good to pass up – stay tuned for my tips on them in the coming weeks.

·      Bundles of Joy. Some of the bundles include Battle Pass Tier Skips. If you have Call of Duty Points to spare and see something you like, check to see if the bundle includes a Tier Skip, then pull the trigger on this win-win scenario. See what cool bundles came – and are coming – with Season Three here.

·      Use Those Double XP Tokens Wisely. If you have some spare ones left over from prior seasons, or unlock them in the Battle Pass, activate Double XP Tokens when you know you will have uninterrupted time to kill… Literally.

Hopefully you’ve been enjoying Season Three as much as I have, and if you are, then I’ll be seeing you online.