Check out another selection of familiar locations across the Blackout map, from Treyarch’s rich history of Black Ops. 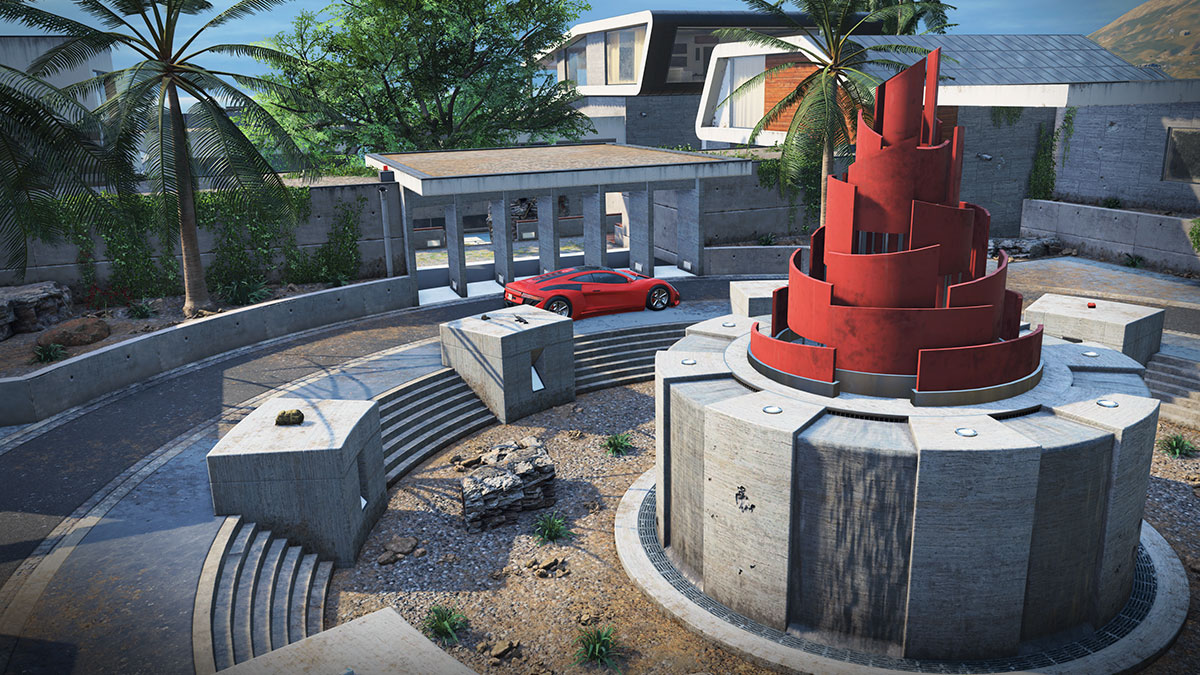 Raid is one of the two mansions that define Estates, the northernmost named location on the Blackout map.

First seen in Black Ops II, this large complex fit for a wealthy homeowner comes with several bedrooms, an iconic art sculpture, a small pool, and a basketball court. It also saw a major Roman-style renovation in Black Ops III where it became the map Empire, but it has since returned to its original design.

While also looting the entire place, you can also shoot a few hoops on the court should there be a break in the action. Just don’t get caught practicing that free throw at the wrong time, because while it is possible to get a kill with a basketball, you’d probably have to chuck more passes at your opponent than a Hall of Fame point guard. 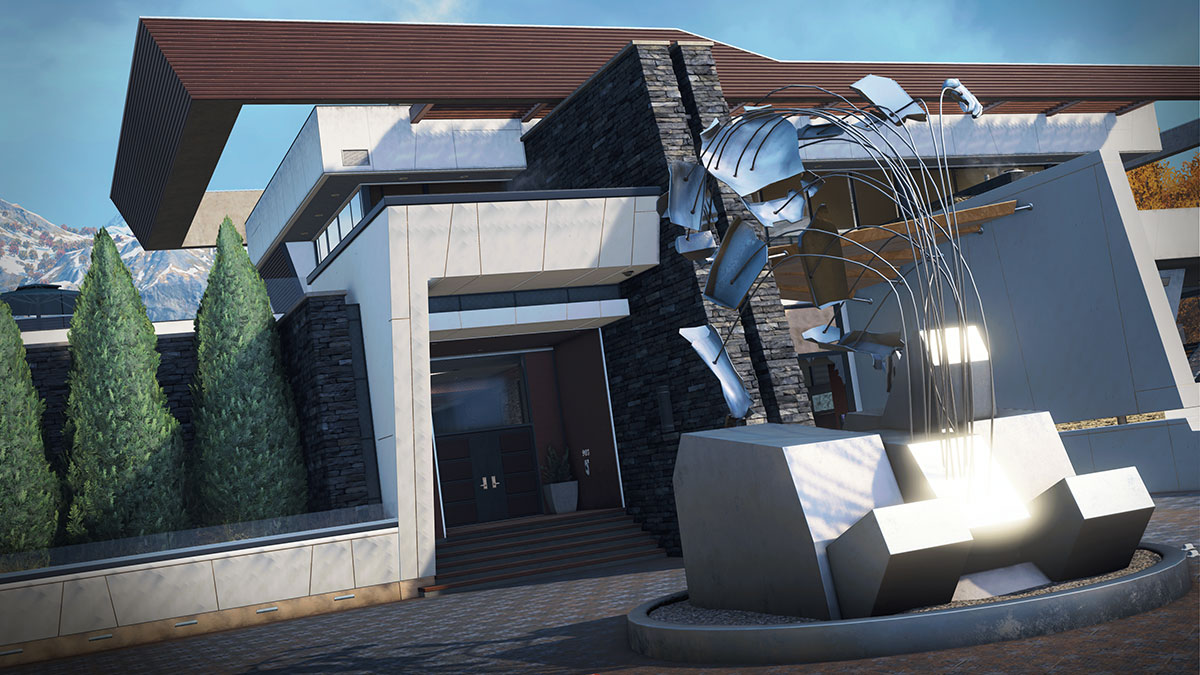 The other swanky estate in this area comes from Black Ops III, but it may not look familiar without a fresh dusting of snow on it or its surrounding structures.

Here, players can explore the mansion and loot from all of its rooms, including some that were conveniently bolted shut when it was featured as a Multiplayer map.

Furthermore, on the roof of this building is a helipad with more loot and, occasionally, a helicopter. Given how close the Estates are to the northern boundary of the map, finding this helo may be a perfect ticket out should the Collapse come right from the North. 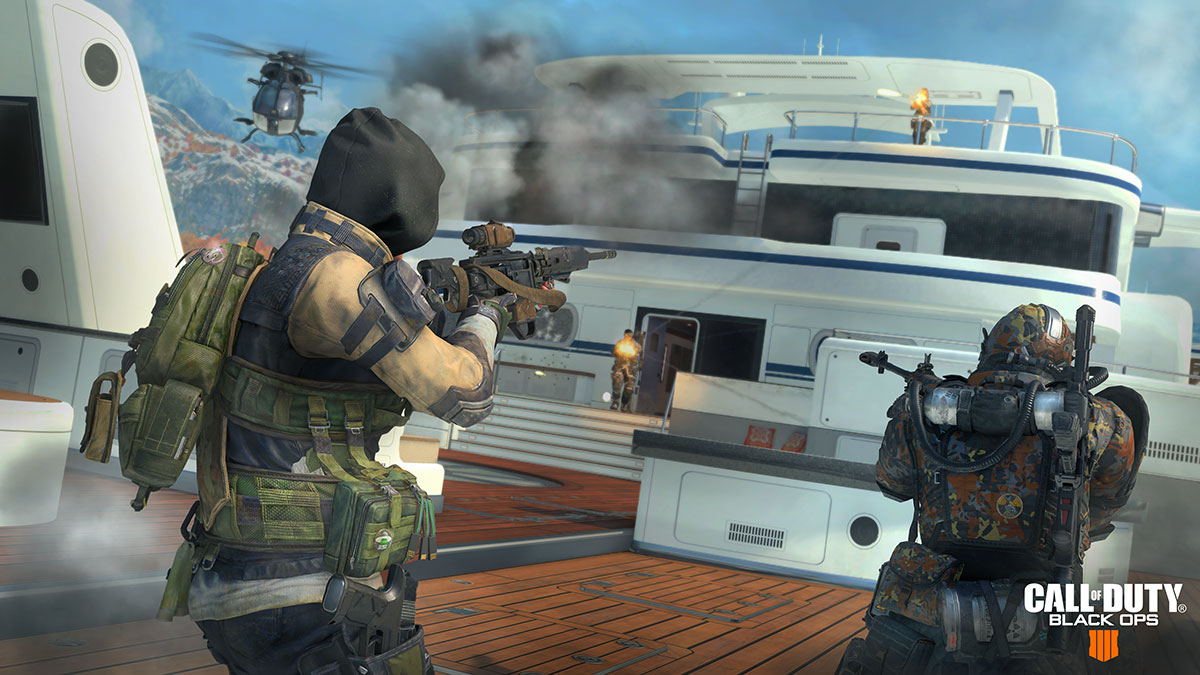 Added into Blackout in December as part of Operation Absolute Zero, Hijacked takes place on a swanky seafaring vessel that’s put down its anchor just North of Nuketown Island on the Western side of the map.

Hijacked was originally located in international waters when it was a Multiplayer map in Black Ops II, and saw a re-imagined sequel as a flying police airship in Black Ops III's Skyjacked. In Blackout, Hijacked has plenty of loot within the new areas below deck and on the roofs of the ship. But act fast; because the ship is moored near one of the edges of the map, the collapse can move quickly here, so be sure to get out fast with one of the boats, or even a helicopter, situated on or near the ship. 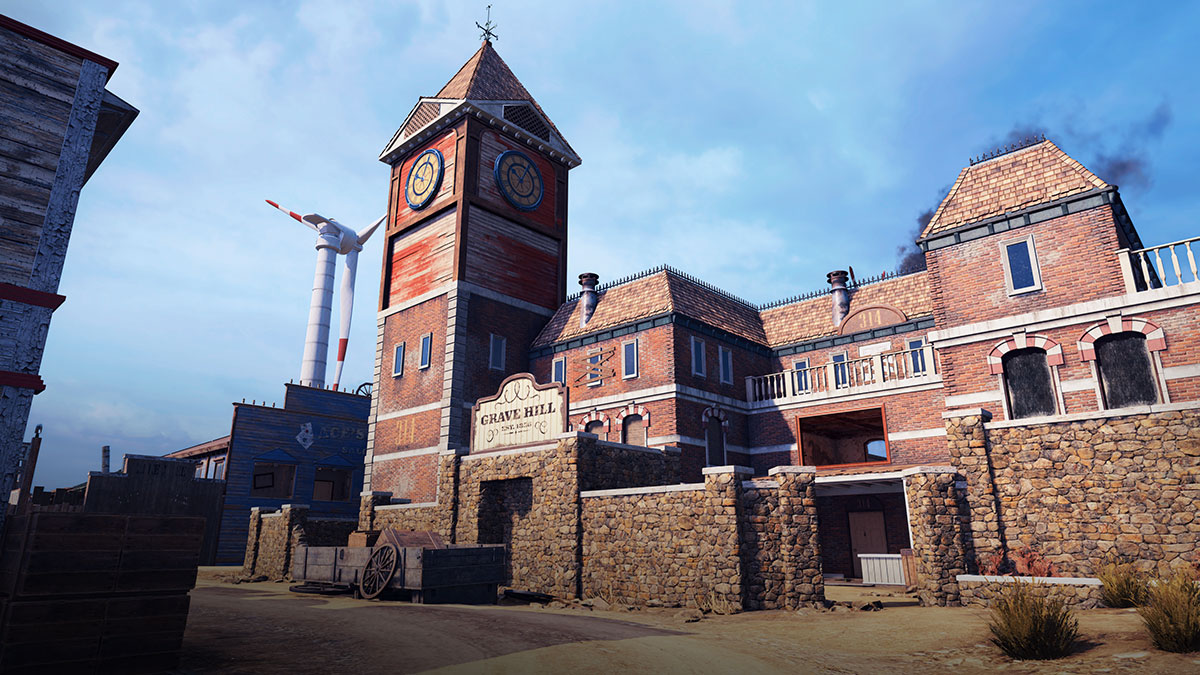 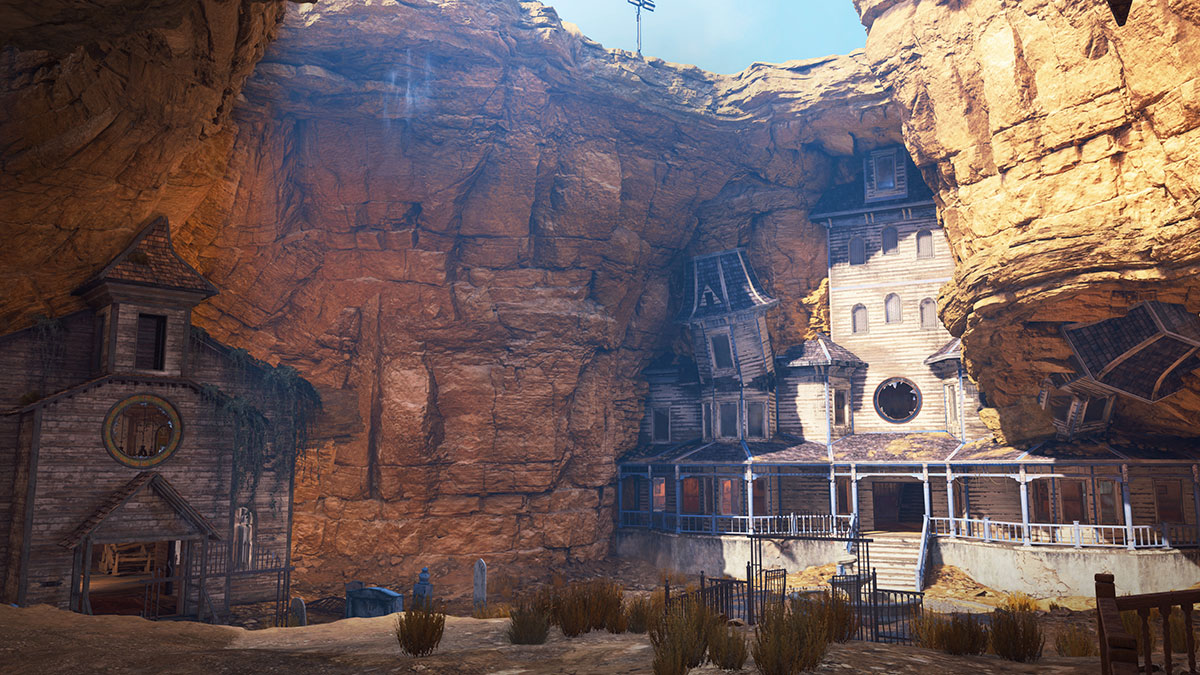 With the release of Operation Grand Heist, the southeast corner of Blackout is home to Ghost Town, a multilevel area that’s big enough for two major pieces of Black Ops history:

First is the above-ground town area. This is a re-creation of Outlaw from Black Ops III’s Multiplayer, which, in fact, was a Westernized re-imagining of the map Standoff from Black Ops II.  There are plenty of two-story buildings scattered around the area, great for snipers and other sharpshooters who want a high ground advantage for duels at high noon. It is also possible to get inside, and on top of, the town’s central clock tower, which makes for a fantastic vantage point.

Buried beneath the town is the Black Ops II Zombies experience most known for its intricate challenges. Here in Blackout, it is a gold mine for loot, as well as a potential spawn for the undead, and the sought-after Zombie Crate. But be warned; you’re buried underground here. In order to exit, you must travel up the mine shafts, which are also prime chokepoints to set up ambushes and other nasty traps. 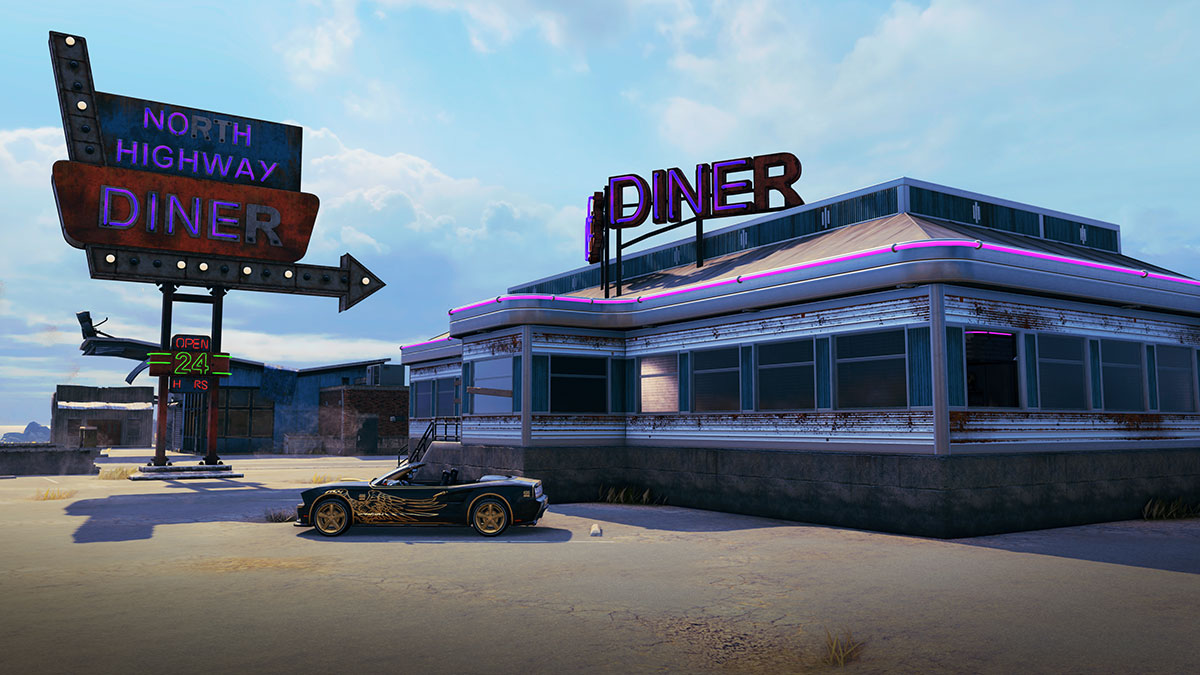 The Diner from TranZit

Taking the north bridge out of Nuketown Island puts you right at the diner featured in TranZit, the Black Ops II Zombies map where players travelled on a bus to five unique locations. 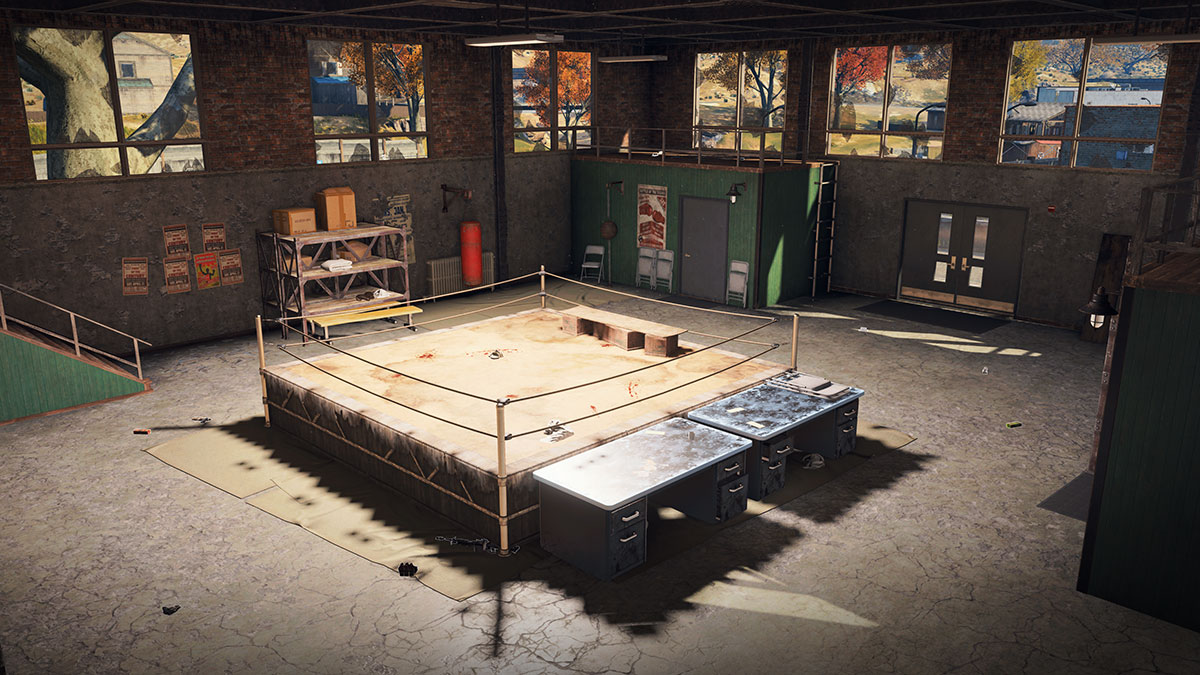 The Boxing Club from Shadows of Evil

Like the diner, this boxing club isn’t a named part of the map, but is part of Black Ops Zombies lore.

Located east of the Fracking Tower in quadrant F6, the boxing gym appears to be a normal part of this small town. But Zombies veterans know this area to be one of the ritual rooms in the Black Ops III Zombies experience Shadows of Evil, and is another location in Blackout where the undead horde can spawn. 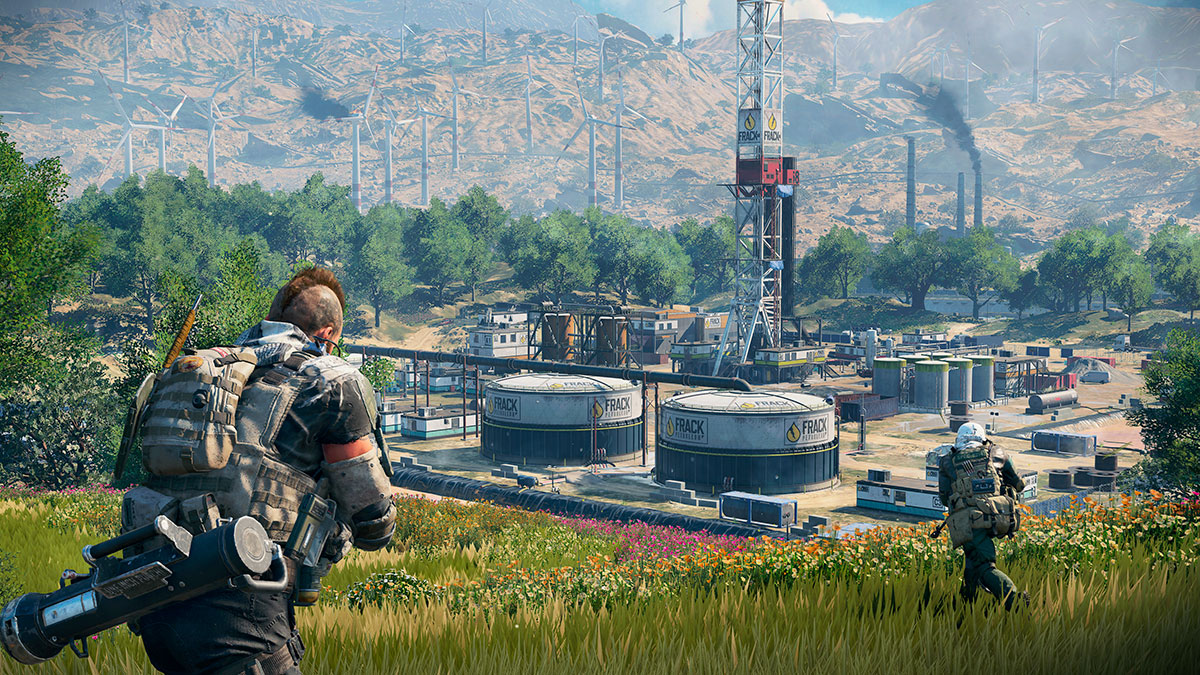 A Radiation Reference at Fracking Tower

Although the entire area is not based on the Black Ops map Radiation, part of Fracking Tower is an homage to a key feature of it.

North of the main tower are two yellow containers and a set of blast doors, which were the main feature of that classic Multiplayer map. Some say the doors are still operable to this day, and that the chambers underneath the Fracking Tower map lie plenty of loot. 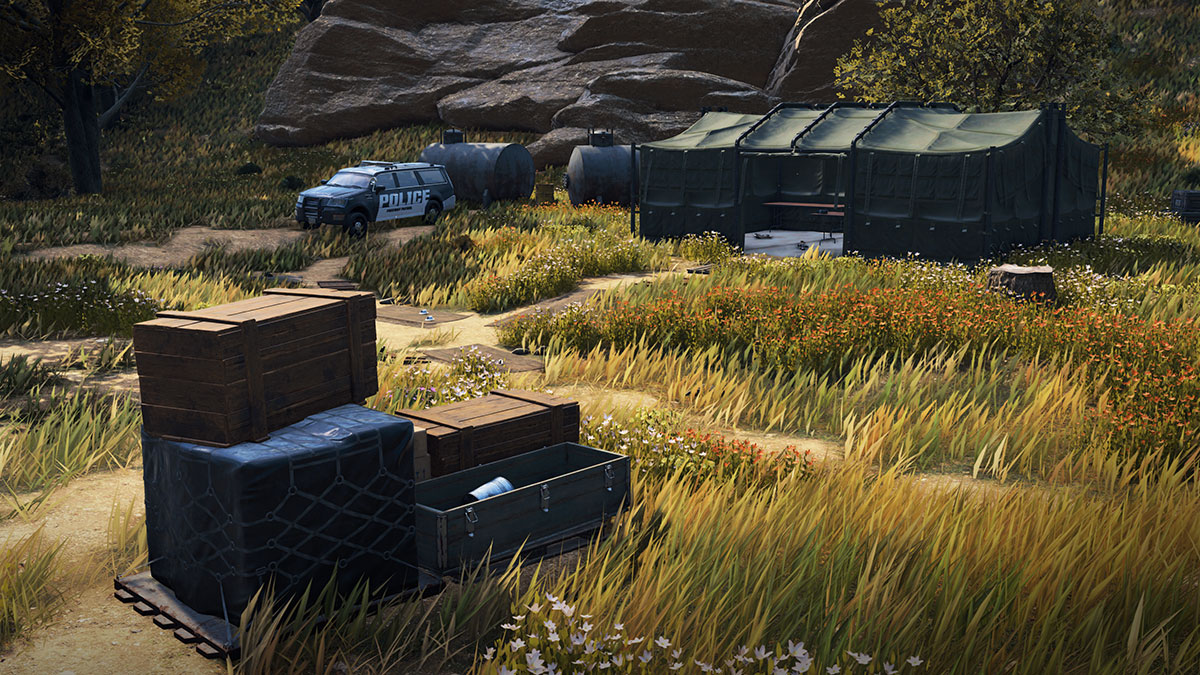 Those who played the Call of Duty: Black Ops campaign remember the iconic mission, Payback. Here, Woods and Mason have to escape from Kravchenko’s cronies in the middle of Laos, taking a chopper in the middle of the camp to do so.

This camp is hidden deep in the forests east of the Construction Site – specifically in quadrant D3 – and is where you can find a good amount of loot along with that signature helicopter.

Of course, there are still plenty of secrets and locations on the map (and likely more to come), but we’ll leave those discoveries up to you. We hope you take a moment to stop and take in the sights of the Blackout map while playing Call of Duty: Black Ops 4. Or, you can check out the game’s Theater mode and free roam the whole map without fear of an enemy squad rolling up on you.