Take a closer look at some Season Three Battle Pass system weapon blueprints including strategies, tactics, and tips on how to use them in your Warzone loadouts

Verdansk has fallen to pieces and we need the best soldiers with top equipment to start settings things right again. With Season Three in full force, it’s time to look at some of the new weapon blueprints to see how they can be integrated into your Warzone loadouts, whether you’re seeking victory in Battle Royale or Plunder. 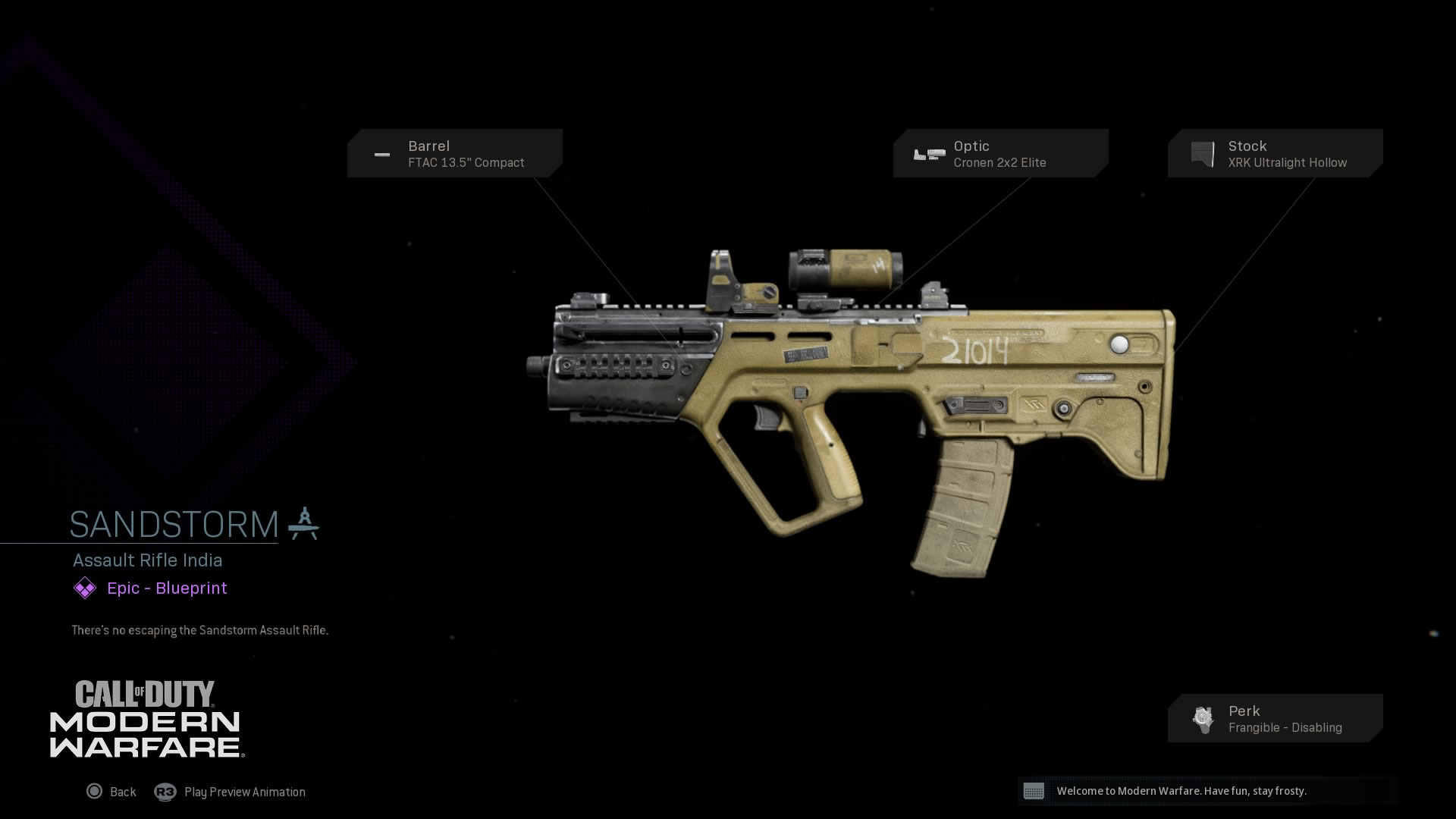 Snap on Target with the Sandstorm

Move fast and snap onto enemies without sacrificing long-range power. The Sandstorm weapon blueprint is highly mobile with attachments that favor ADS and movement speed, as well as a 4x optic for precision in long distance areas such as around the Dam or outside of Stadium. Consider Stippled Tape Grip as the fifth attachment for added snapping power or opt for the Merc Foregrip to control recoil when firing at distant enemies. 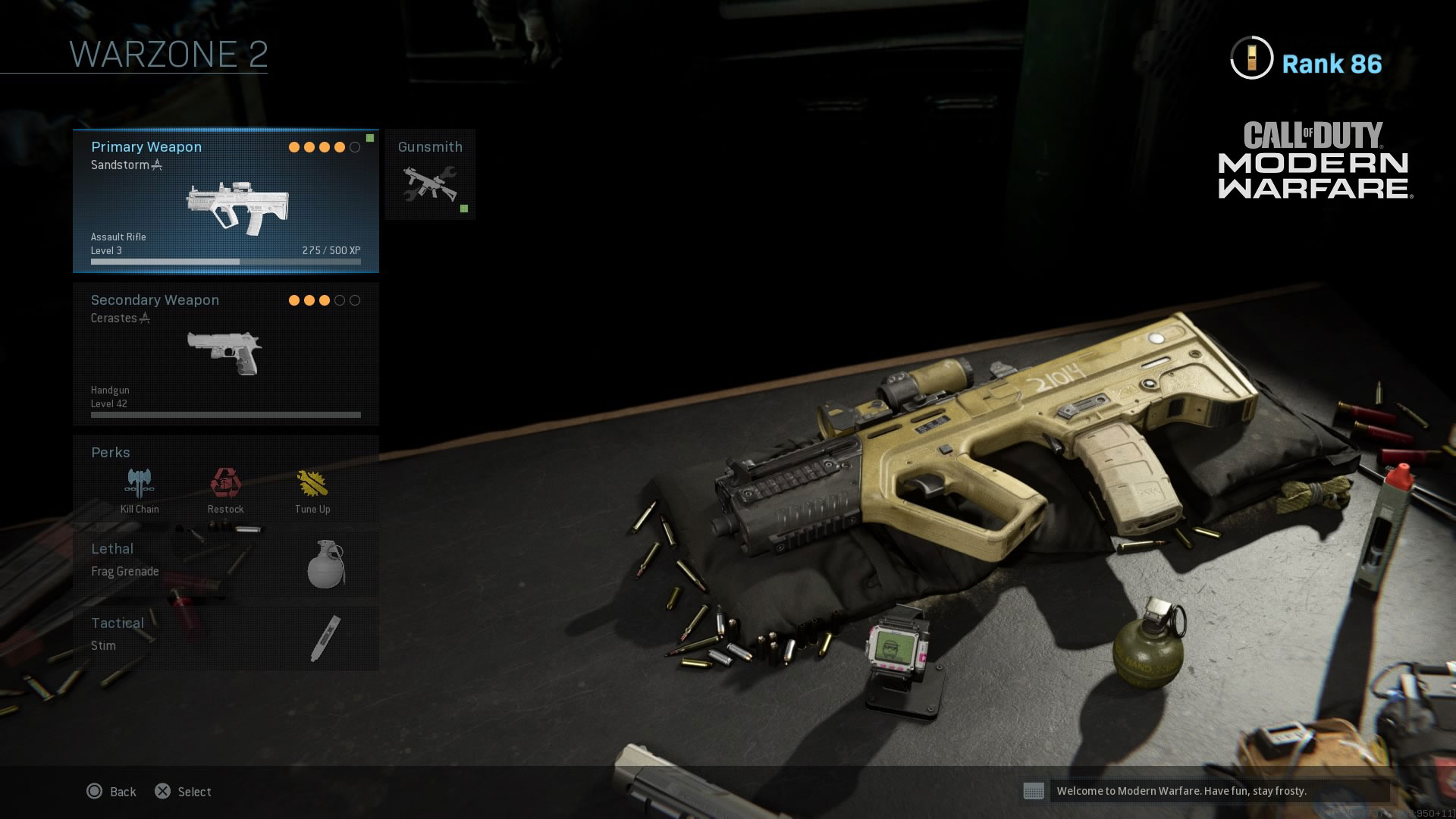 Take the lead in early game looting and completing Scavenger Contracts, as Kill Chain increases your chances of finding Killstreaks in supply boxes, a potential major boon to your team. Restock improves your survivability and lethality when paired with Stim and a Frag Grenade and Tune Up helps you pick up fallen teammates more quickly. Further support your team in Plunder with the Recon Drone, allowing you to scout the area and ping incoming threats as your allies stock up on Cash. 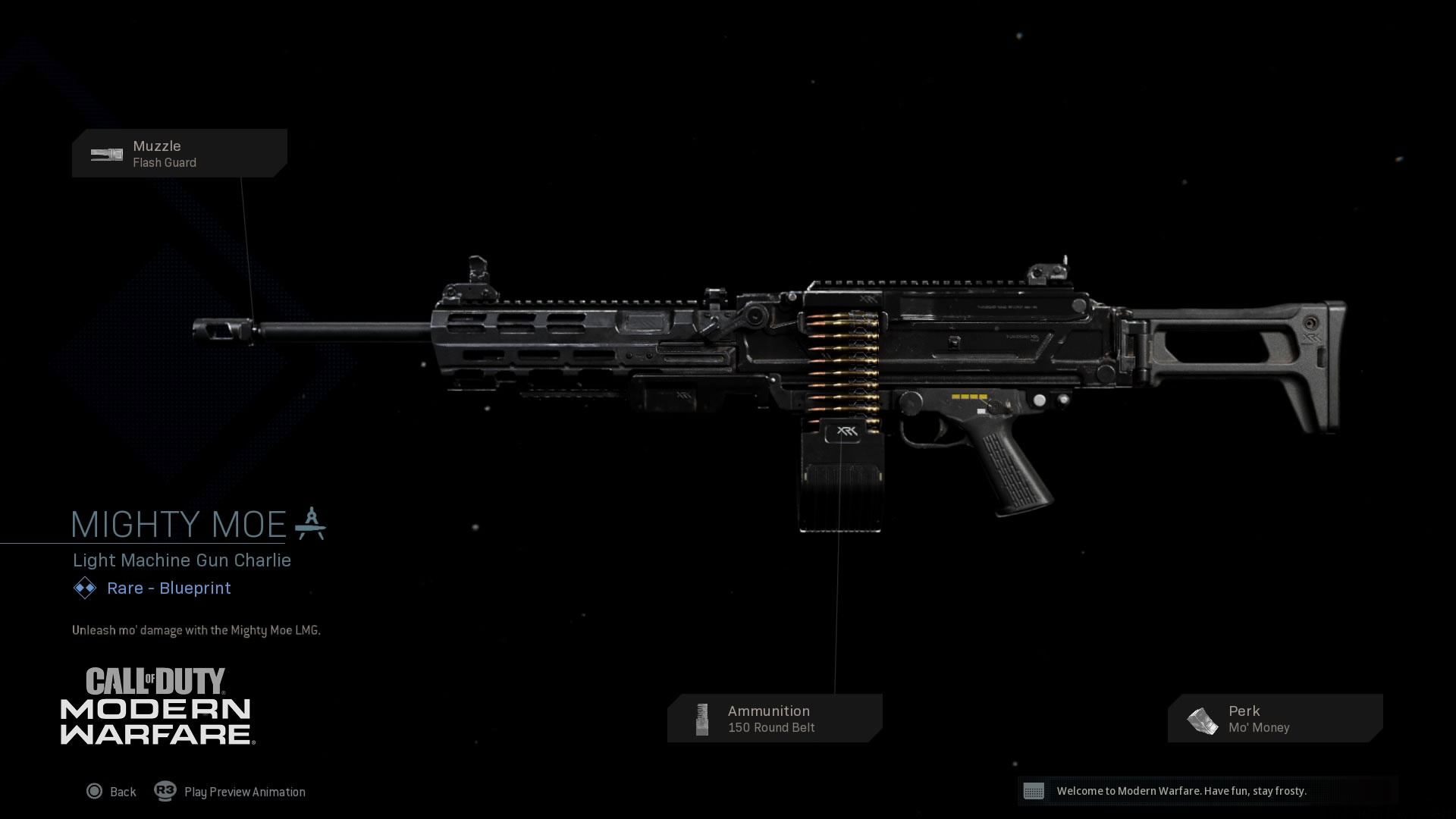 This sleek weapon blueprint is the perfect tool for suppressing and taking out enemies in a storm of bullets. Flash Guard helps conceal your position and the monster 150 Round Belt lets you keep firing without the need for a constant reload. For Warzone, consider switching out Mo’ Money with FMJ for additional bullet penetration. In the two open attachment slots, we recommend the XRK Striker to improve ADS speed, and the robust Integral Hybrid optic for precision at range and in close proximity. 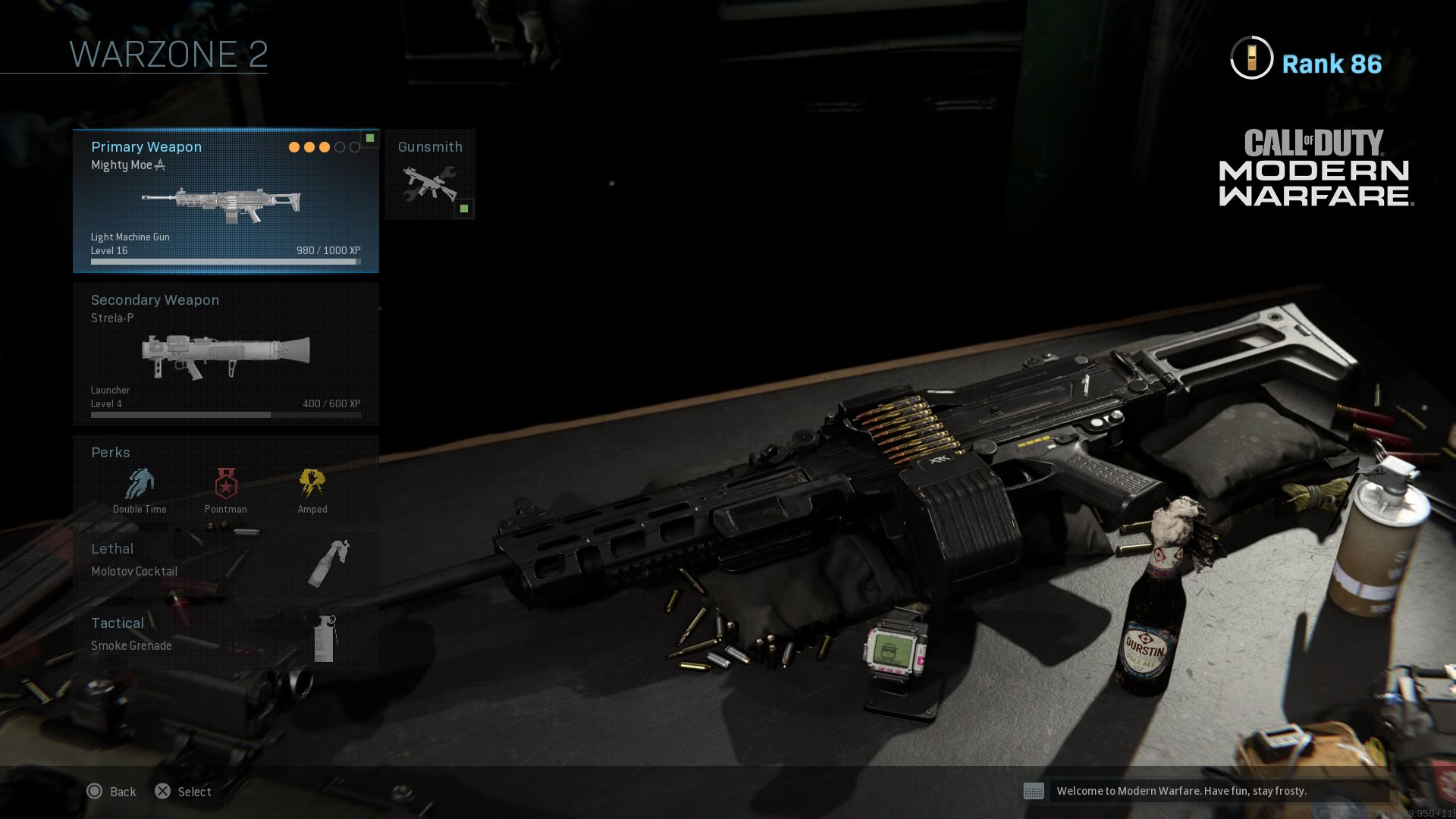 Double Time offsets your slow movement speed by giving you a longer tactical sprint when it’s time to move positions or get away from incoming gas. Pointman rewards your team’s efforts with bonus cash when completing Contracts, and Amped improves your handling speed, a much-needed perk when dealing with two heavy weapons. Disorient enemies with your Smoke Grenade and cut off pathways with the Molotov Cocktail. In Plunder, Stopping Power Rounds give the Mighty Moe a beautiful 150 shots of pure lethality. 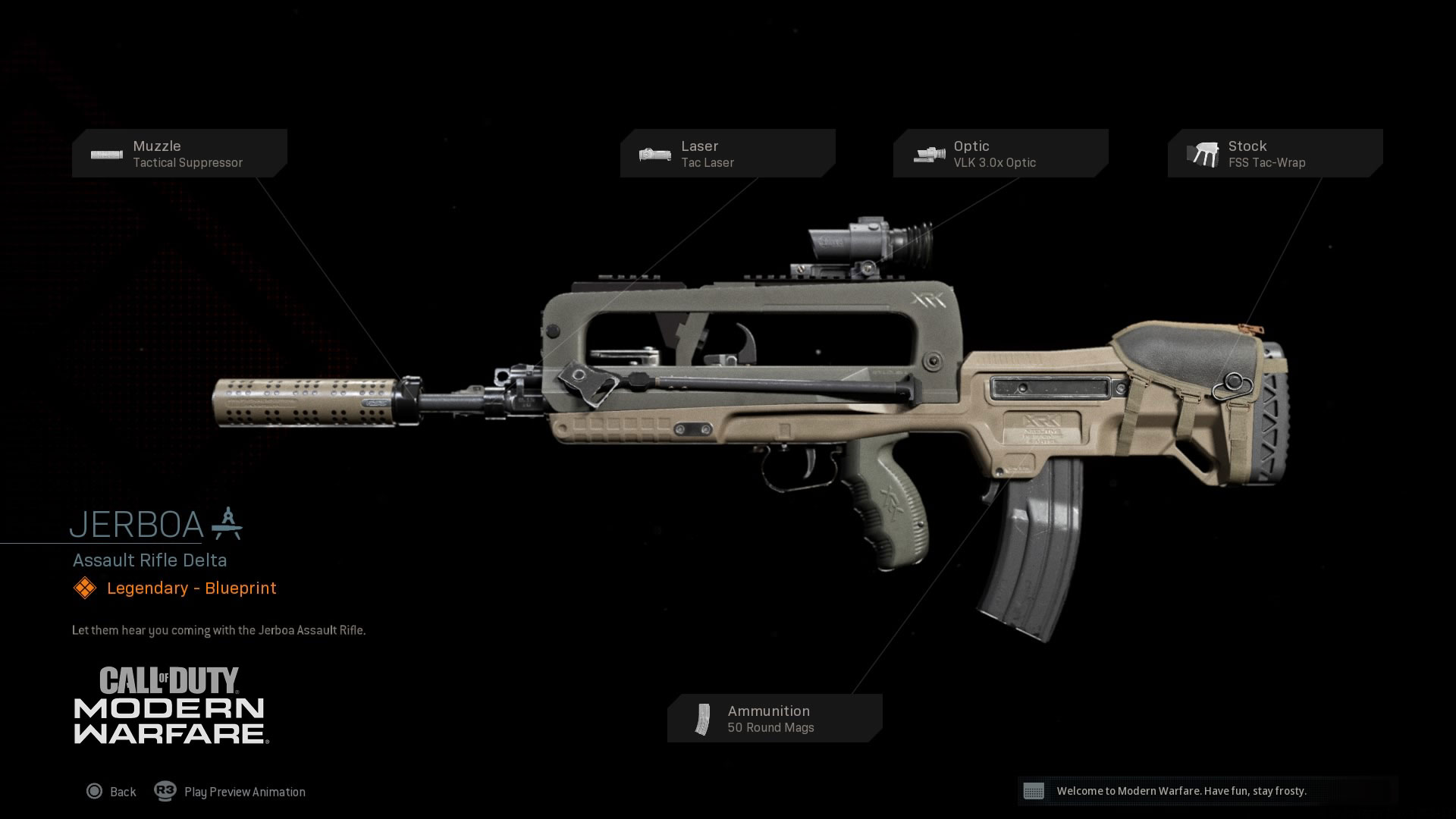 Keep a Low Profile with Jerboa

Take your enemies by surprise with this stealthy and snappy Legendary blueprint. The Jerboa comes equipped with a five-attachment spread including the Tactical Suppressor for low profile shooting, a 3x optic for mid-range precision, and hefty 50 Round Mags with the Tac Laser and FSS Tac-Wrap to offset the reduction to ADS speed. Pair the Jerboa with the versatile Renetti — a new and free handgun unlocked at Tier 15 — to take out enemy players in close range. 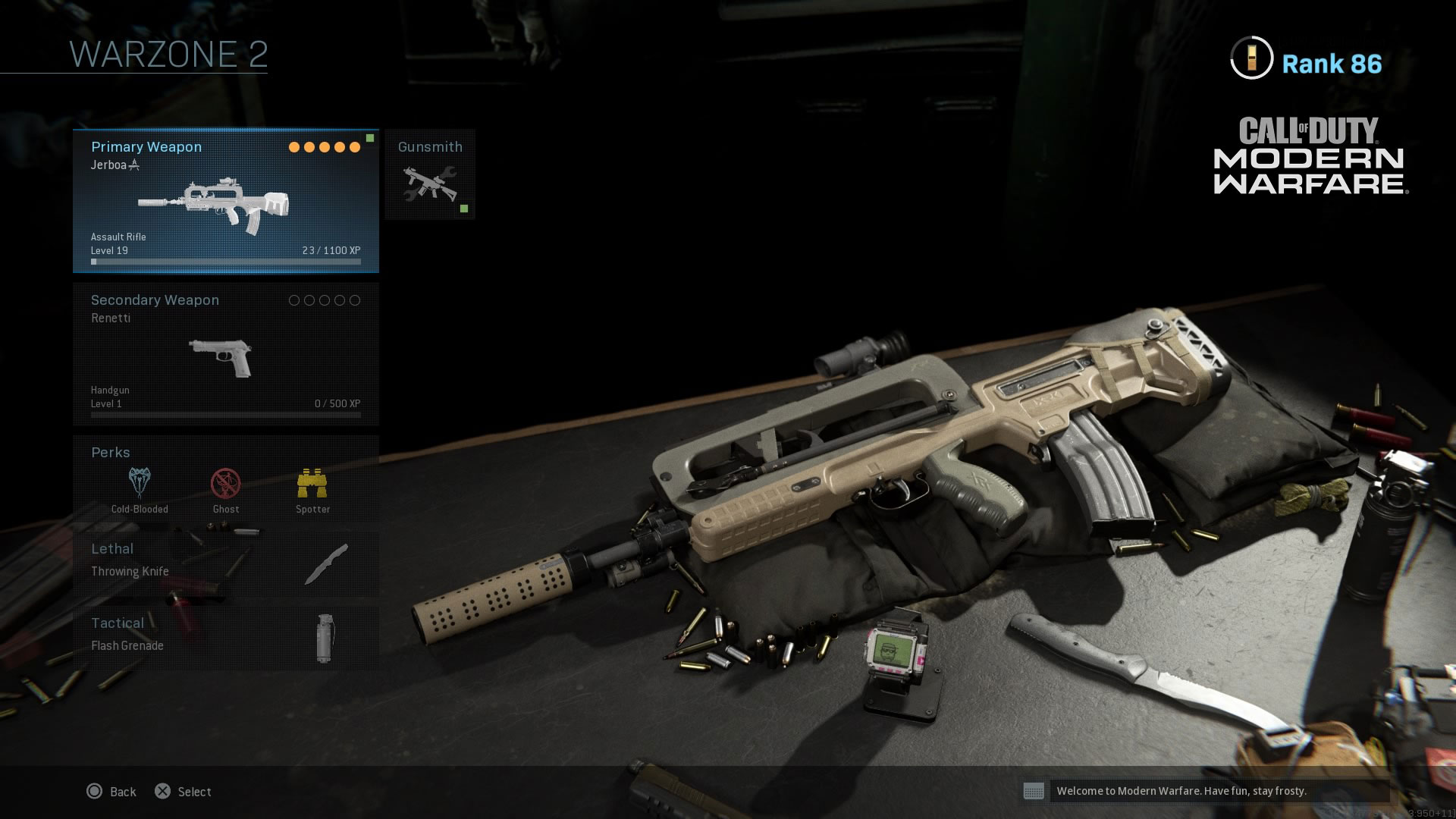 The combination of Cold-Blooded and Ghost keeps you off the enemy’s radar and better hidden against thermal optics, with Spotter providing valuable intel that can help lead your team to an enemy squad. This perk setup is particularly useful toward the later part of Warzone matches, as players gain Heartbeat Sensors and lay down traps to secure their position in the final circle. Use your Flash Grenade inside buildings and in other tight areas for added intel and extend your silent lethality with the Throwing Knife. In Plunder, use Dead Silence to approach enemy teams without stomping around and giving away your position.

1.     The Sandstorm’s 4x optic helps keep you on target against distant enemies, a powerful asset when firing across buildings or down major throughways. Retain precision through burst fire, and be ready to switch to a CQB-capable secondary weapon when the fighting closes in.

2.     Save your launcher shots until you really need them when using the Mighty Moe loadout; the heavy-hitting LMG is perfectly capable of dispatching vehicle drivers with its high magazine capacity and bullet penetration.

3.     Take up a flanking role when using the Jerboa loadout. Smart movement combined with a stealth weapon and stealth perks means you can surprise the enemy from behind while they’re engaged with your teammates. This is especially helpful while depositing cash in Plunder.

4.     In Battle Royale, move with your team to pick up Cash and complete Contracts as quickly as possible, particularly at the start of the match. The faster you pool together the Cash needed to call in a Loadout Drop, the sooner you’ll be able to access your blueprint loadouts.

5.     When you redeploy back into a match with Plunder, consider switching to the Sandstorm while you drop. The added accuracy may help you hit some shots in the air or snap to your target and quickly eliminate an enemy as soon as you hit the ground.

Progress through the Season Three Battle Pass system tiers to reach these three distinct weapon blueprints which can be used by your squad alongside other goods including Operator skins, vehicle skins, XP and Weapon XP Tokens, and instant access to the newest Operator — Alex. Preview all the goods of the Battle Pass by visiting the Battle Pass tab in-game.