Black Ops 4 Map Spotlight: We Break into Lockup with an Overview, General Guide, and More!

One of the two new maps as part of Operation Grand Heist, the key to a decisive victory in Lockup is knowing how to play with verticality.

An international crime syndicate has launched a full onslaught upon a Los Angeles police station, intent on destroying evidence and silencing witnesses.

Operation Grand Heist brings Call of Duty: Black Ops 4 players to this crime scene in progress, complete with fleeing criminals and cops giving chase at the start of the match.

Should you find yourself on clean-up duty for the Black Ops or Mercs in Downtown LA, here’s what you need to know: 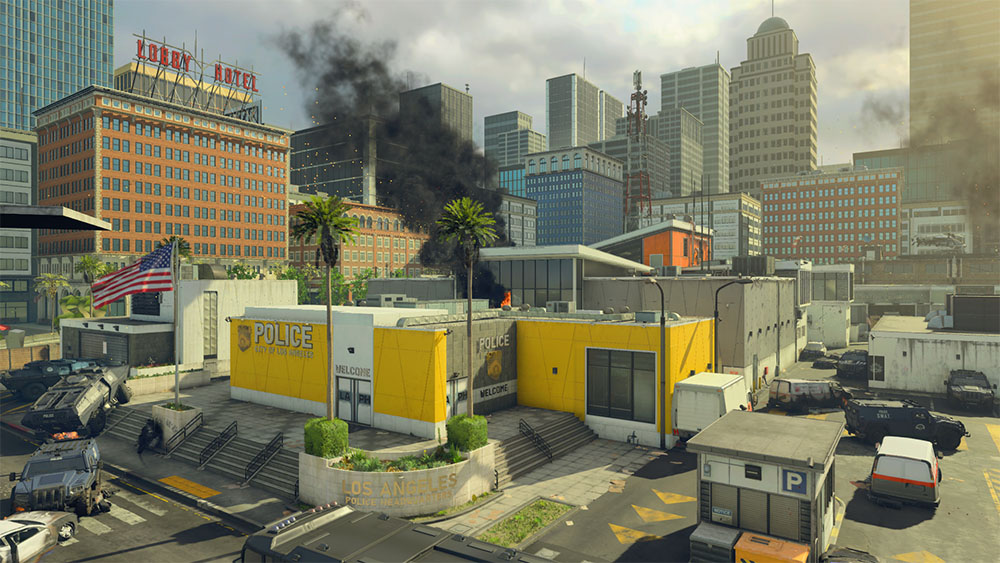 Despite the variety of asymmetry across the map, with a variety of buildings to explore, fight through, and even climb, it’s worth breaking Lockup down into three main lanes.

The biggest area of interest is the map’s central police department building, also known as the largest complex on the map. Here, the remains of what were office cubicles, desks, and other workspaces used for administrative functions at the station are scattered throughout individual rooms.

The administrative building’s focal point is the dead center area, which is home to the station’s Administration teller booths, a wall of fame, and massive windows that pump serious morning daylight into the hall. All real estate features aside, that window is also a vantage point for those lurking on the roof.

Accessible either through a few staircases, ladders, and a jump spot from a separate L-shaped building in the Northeast, this area defines the map’s verticality. On this massive walkable roof are sightlines not only into the main building, but also to northern and southern side paths that are often used as flanking routes.

These routes also have a few secondary structures. Namely, the northern path has two buildings with a lush courtyard bridging the two together, while the other route has a singular, more central office with a very narrow alleyway alongside it and the map’s southern border. 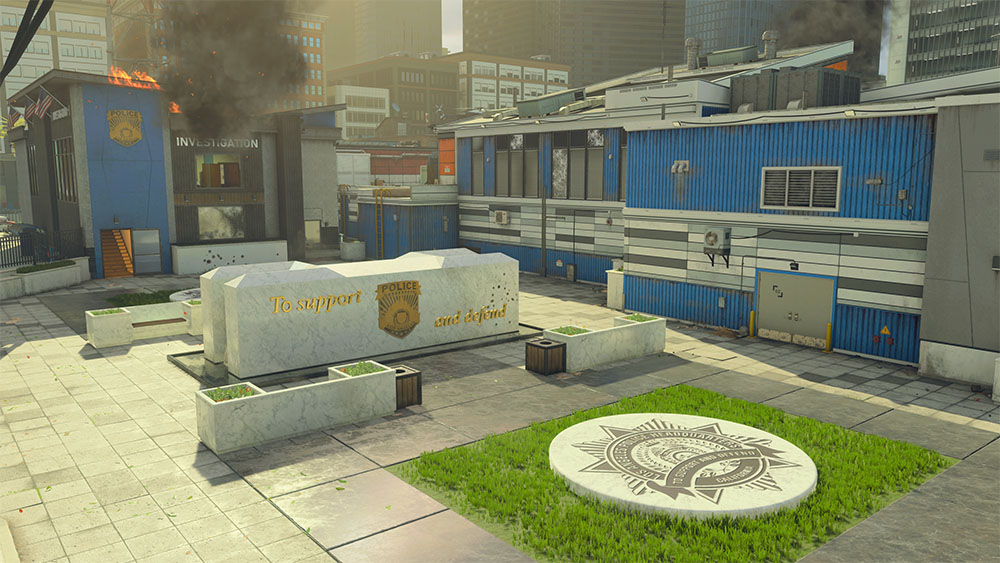 Verticality is the name of the game here, as several multistory structures define this urban battleground.

Those who want to trek inside the offices might want to suit up with an appropriate close-quarters build. A shotgun, such as the new full-auto Rampage, can be a game-changer inside the tight office spaces. In terms of perks, Flak Jacket and Tactical Mask can mitigate the damage done by explosions, radiation, fire, and more non-bullet damage that tends to happen here.

Speaking of explosions, radiation, and fire... Specialists with these kinds of abilities or weapons (such as Firebreak) can make weaving through rooms a nightmare for opponents. Just like in the Operation Grand Heist reveal trailer, popping a Reactor Core in the center of the main building can raise some hell, as it can hit enemies on multiple levels.

Rather than trying to deal with shotguns, submachine guns, and the like indoors, sharpshooters should stick outside on the flanking paths or on the rooftops. Coupled with a buddy who can fight high-firing weapons with equally fast firepower, a sniper or a tactical rifle-user can set up shop in these areas and pick off foes from afar.

This map is also a field day for Ruin players who love to do a bit of parkour. With the Grapple Gun, there are plenty of shortcuts and unexpected movement patterns to make here, such as flying from inside the central building out onto the rooftop. 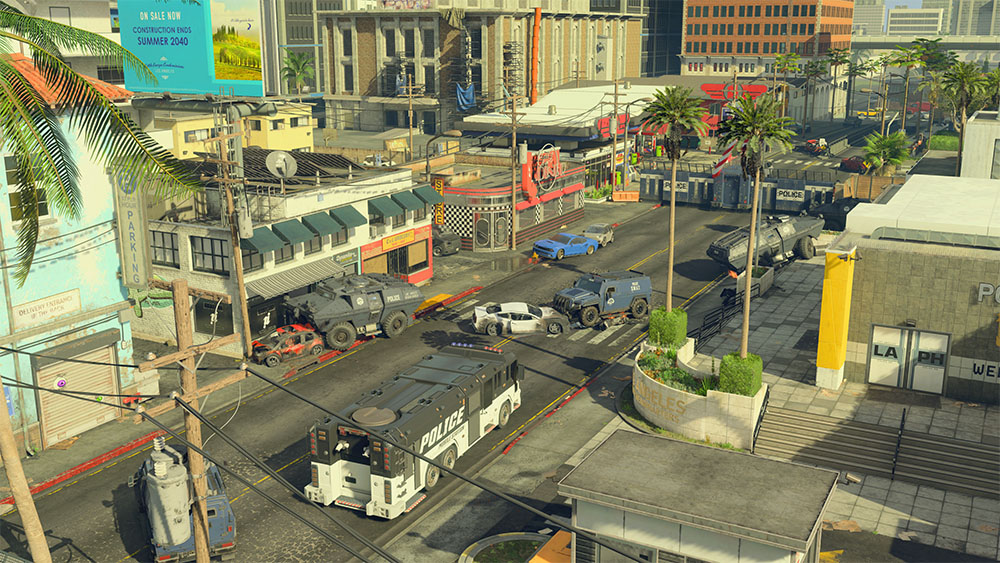 No matter what game mode you decide to drop into, the central building will have at least one objective within the immediate vicinity or inside this structure.

Having to play through this area is nearly unavoidable... and for further proof, open up that Heat Map on the Call of Duty Companion App. The dead center of the map will be lit up like a Christmas tree.

Rather than deciding between avoiding the area or entering the fracas, the real question is how to safely get in and out of the central building, as well as how to protect it. Coming in through the windows via the rooftop is one option, but there are also several different entry points on all sides of the ground floor. Should you find difficulty crashing through the top, just try to walk through the front door... or through the rear or the sides.

In some game modes, such as Hardpoint, the secondary buildings can also be objective locations. These are where traps, such as Nomad’s Mesh Mines, and close-quarters builds are even more effective, as there are fewer points of entry. Learn to lock down these chokepoints, and these objectives could be home to the pivotal moments of objective games.

Whether you are dropping in for the first time or looking for the best strategies after your hundredth game, the ultimate tip we have for this and every map in Call of Duty: Black Ops 4 is to have fun!