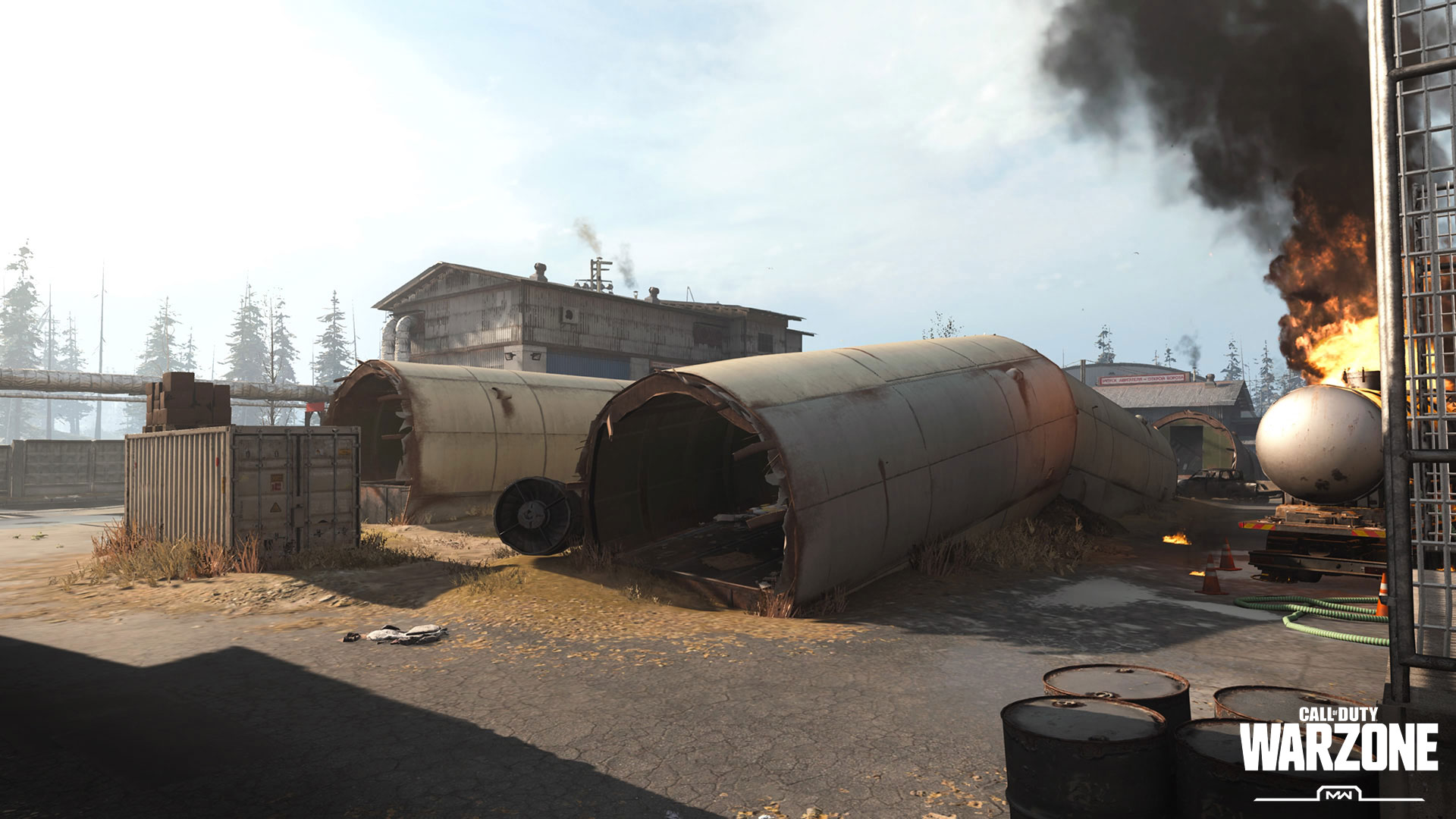 One of the most popular landing locales regardless of where the circle collapse falls, Zhokov Boneyard is the next zone in our Warzone Mastery spotlight.

One of the most popular landing locales regardless of where the circle collapse falls, Zhokov Boneyard is the next zone in our Warzone Mastery spotlight.

Towards the western limits of Verdansk and north of the main Train Station is an area that is usually off limits to residents: a cemetery for aircraft that have since retired from the fleets that flew in and out of the Verdansk International Airport.

Here lies the remnants of these machines, strewn about a dusty rolling field with a familiar Scrapyard among the wreckage.

This is Zhokov Boneyard – or Boneyard for short – the latest subject of our Warzone Mastery series based off the Official Warzone Strategy Guide. 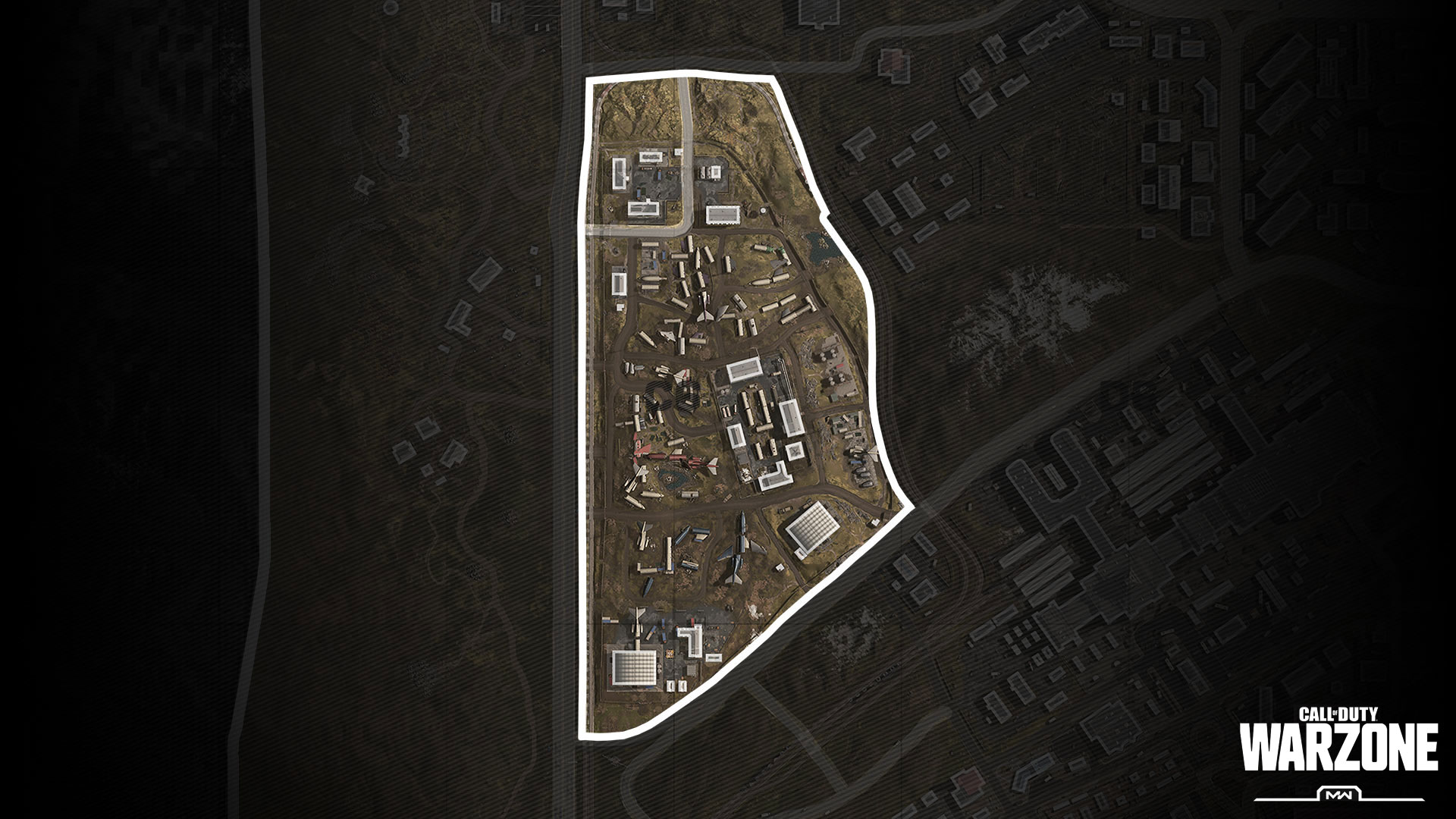 The place where planes go to die: A large cemetery of airline fuselage sections, hangars, and warehouses where Zhokov’s crew stripped and sold the parts to the highest bidder.

The Zhokov Boneyard is one of Verdansk’s larger zones, even though it comprises of six main points of interest, all of which are combinations of named areas in the Zhokov Boneyard Ground War map in Call of Duty®: Modern Warfare®.

The first two points of interest are where Coalition members set up their HQ for Ground War (Offices and Repair Shop) and the areas in and around the E flag (Turbine Shop, Stacks, Purple Plane, Rebel Cache and Midtown). 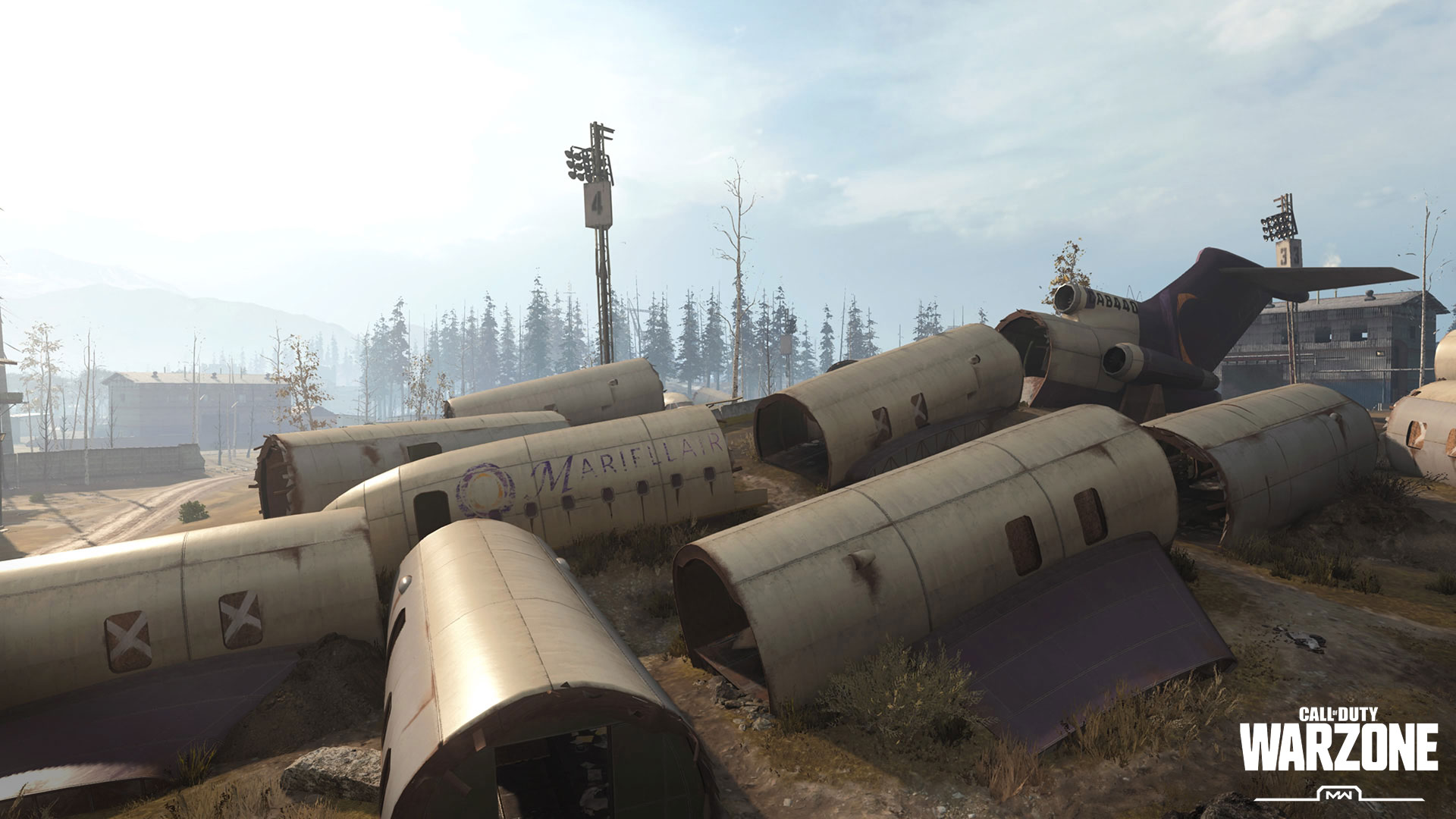 Further south, you’ll find two points of interest surrounding the Scrapyard: Red Plane and Pond due west, and Silos and Boulder Town in the east near the Verdansk Graveyard border. 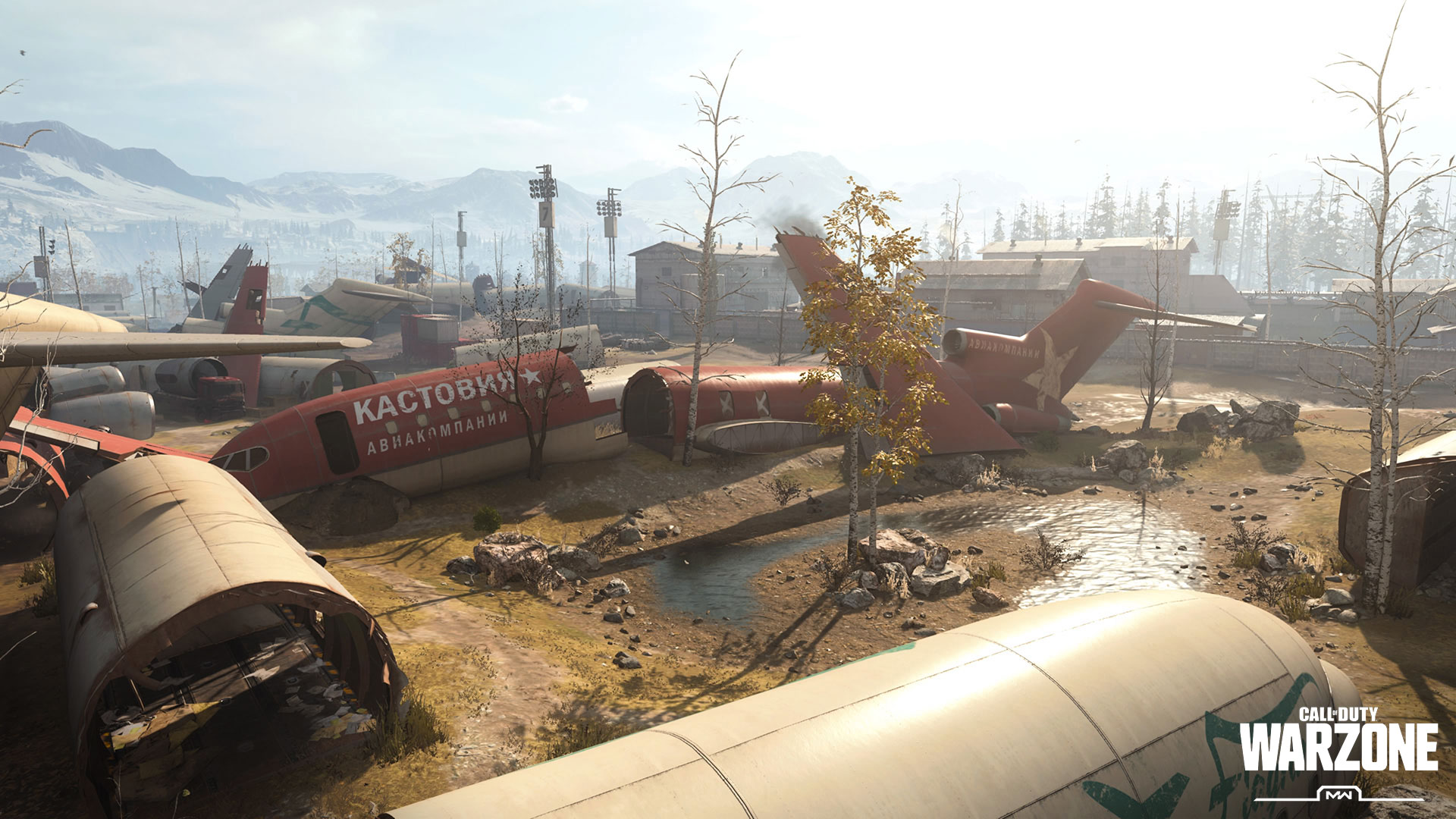 To veterans of the Call of Duty franchise: yes, the Scrapyard point of interest is, in fact, the very same area you might recognize from Call of Duty: Modern Warfare 2, complete with a few warehouses, more broken down plane parts, and a helipad just outside the main office building. 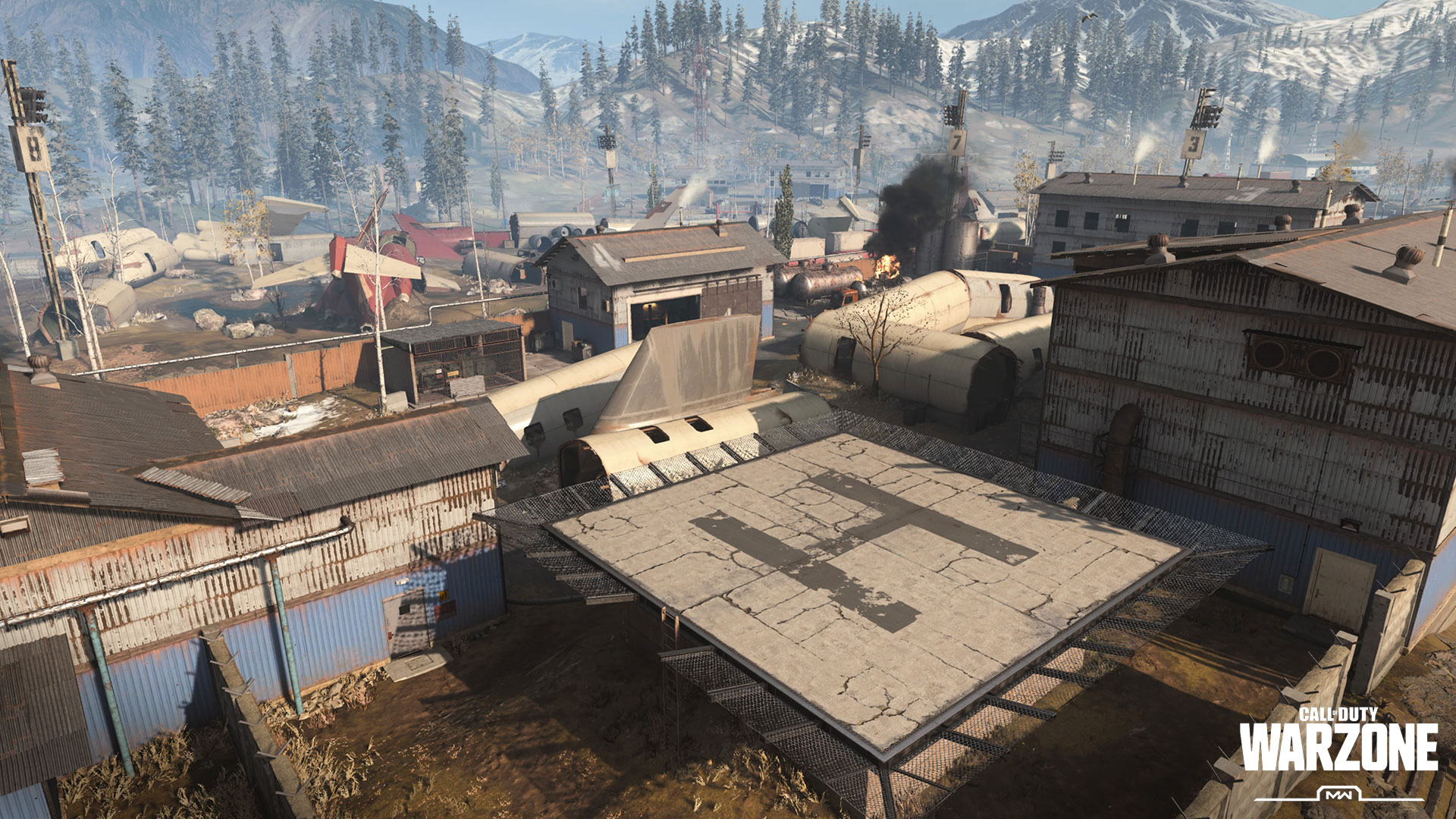 The point of interest that is furthest South is collectively known as Vista Point, Blue Plane, Hangar 9, Hangar 13, where Allegiance boots first hit the ground in Ground War matches. 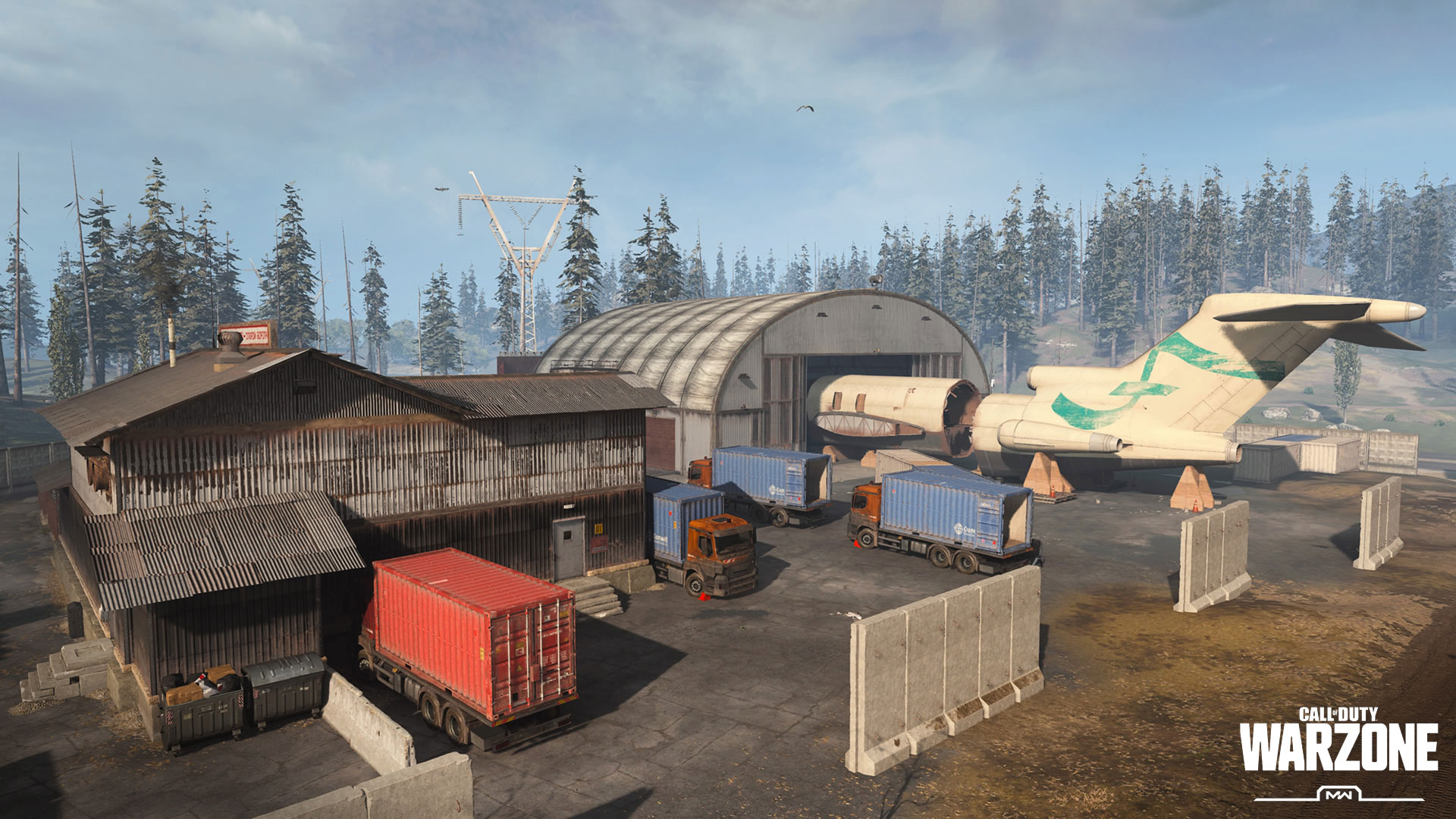 The Zhokov Boneyard provides a mix of looting and engagement opportunities, from brawls inside buildings to long duels across the wide stretch of hills broken up by aircraft parts. However, no matter where you land, you’ll most likely come across another squad roaming around here, as it has proven to be one of the more popular landing and looting spots in Warzone. 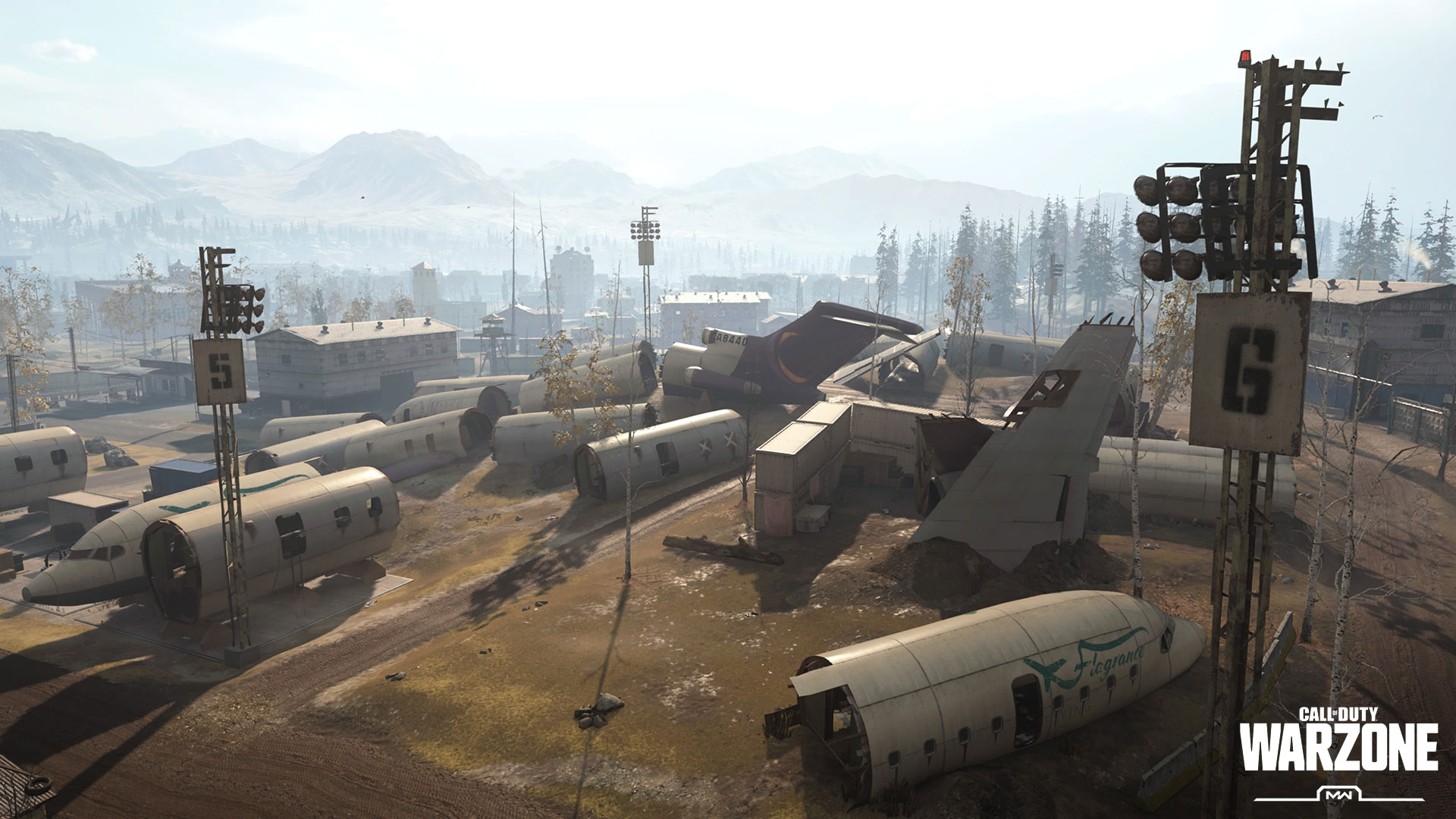 If you plan to land at the Boneyard, prepare for combat: despite being a rather large area, it is one where Operators around the world choose as a preferred landing spot. Here’s four reasons why we think that is the case:

1. Because it is named area on the initial flyover, Operators see this as an easy place to call out as a drop zone.

2. This is a landmark locale thanks to Scrapyard being smack in the middle of it.

3. Due to how much surface area it takes up, Zhokov Boneyard has plenty of looting opportunities, as well as a high chance of contracts spawning somewhere within its massive size.

4. Multiple vehicles, including a helicopter on the office helipad within Scrapyard, can spawn here, allowing squads to hop from potential loot spot to loot spot, chase down contracts further in this area, or get away from here if the circle collapses onto it.

So, in general, check with your squad first before landing here, and if you are playing Solo, try to land near an indoor area where there is a high chance of loot spawning.

Indoor areas don’t just have to be warehouses or hangers: the Silos and Boulder Town points of interest have very little cover, but loot, Contracts, and Supply Boxes can spawn either on the catwalks, on the concrete, or inside the containers and plane parts. 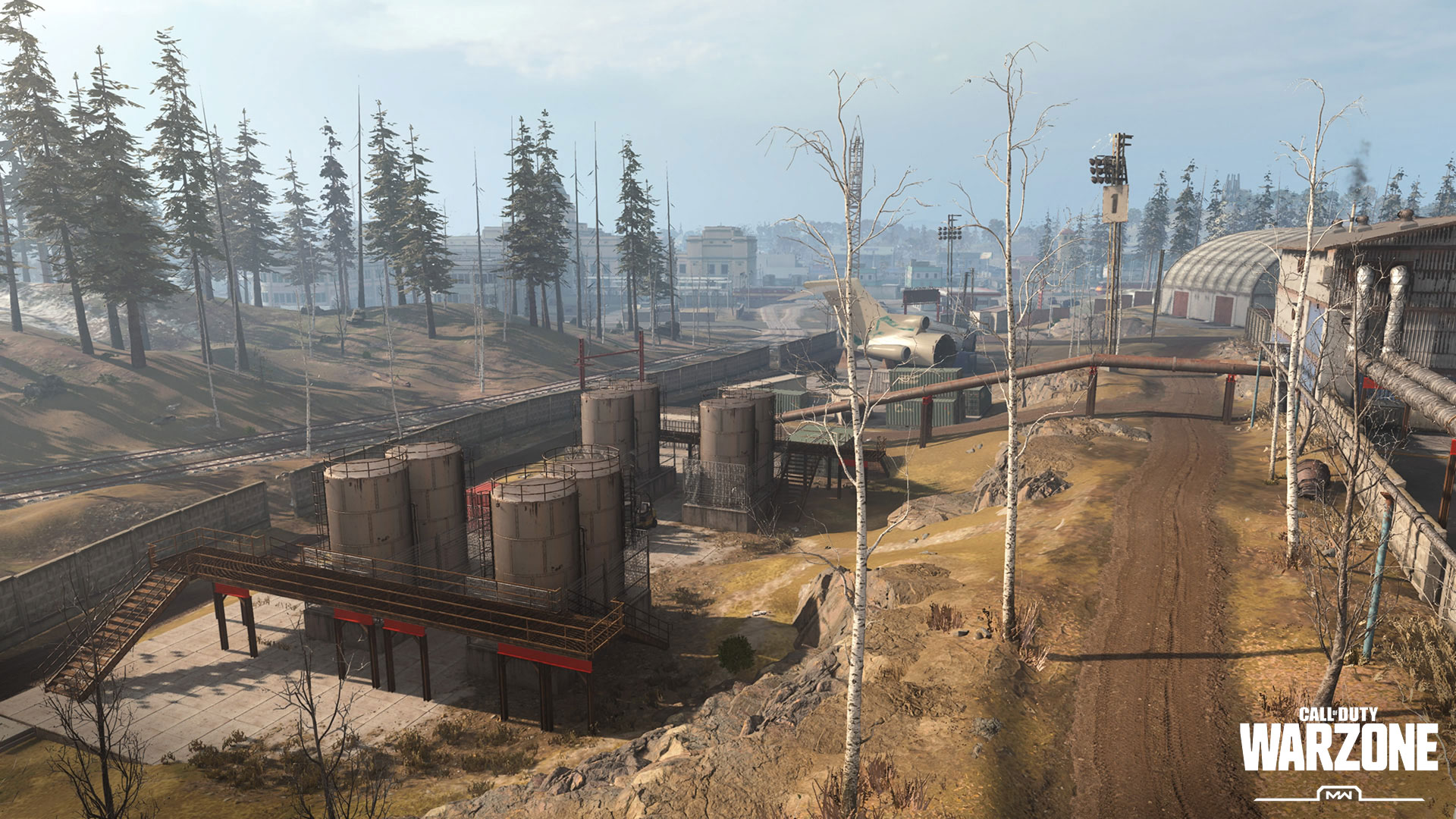 Silos and Boulder Town may be less populated than other points of interest, given that there aren’t any buildings. This area also serves as a flanking route with no objectives in the Ground War version of the Boneyard, and it’s on relatively low ground. However, in the beginning of a Warzone match, other squads may be preoccupied in looting warehouses and offices, which might leave this area untouched. 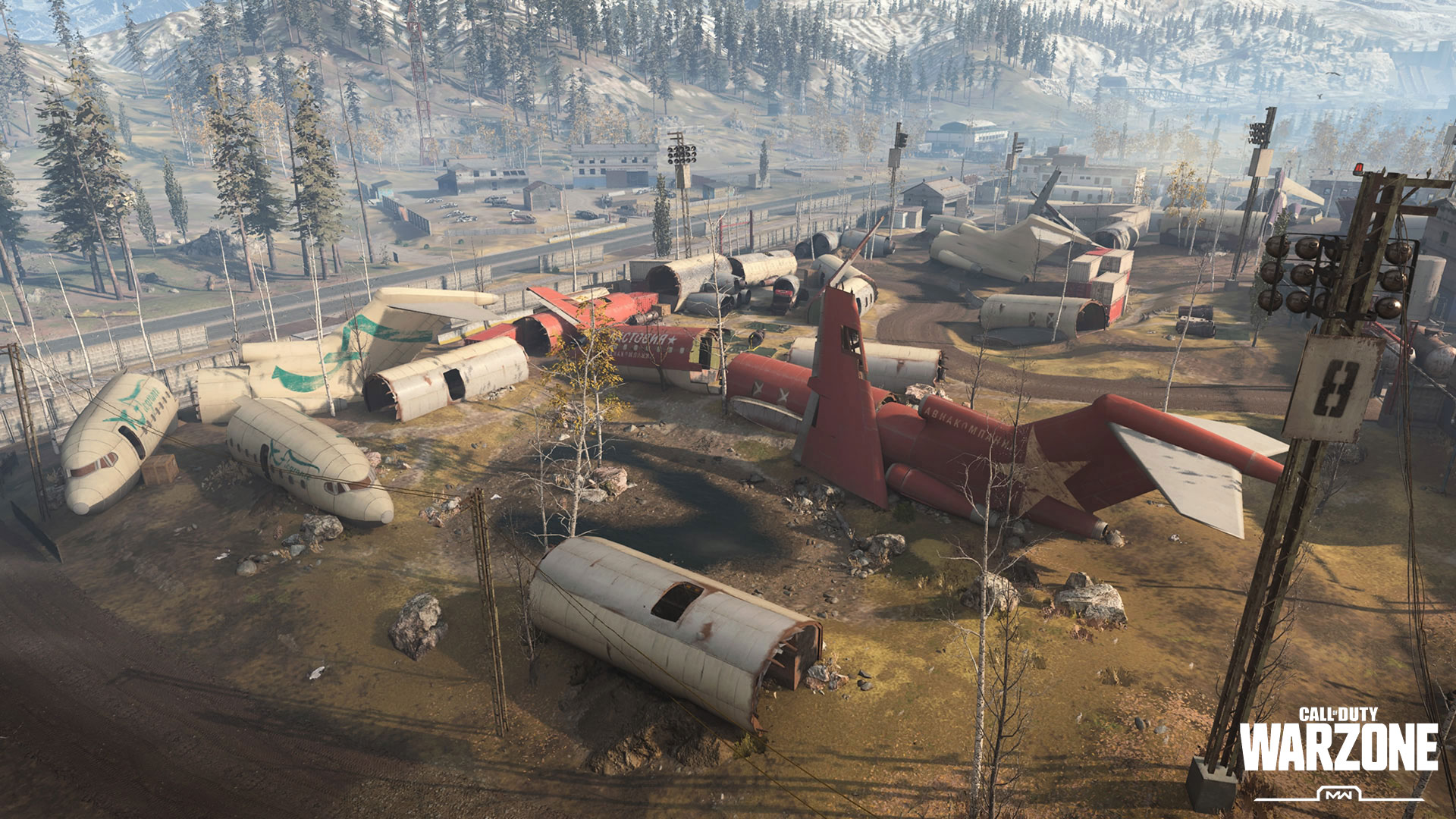 Another oft-overlooked area of Boneyard are the various broken aircraft parts that litter the entire area. Contracts, Supply Boxes, and tons of loot can spawn within these scattered fuselages.

Although it may be risky to explore them, given that they are out in the open, you should tune into the hum of those Supply Boxes and loot accordingly. Who knows? You may just find a weapon that can eviscerate an entire squad who came out of a few tussles and are without any armor plates. 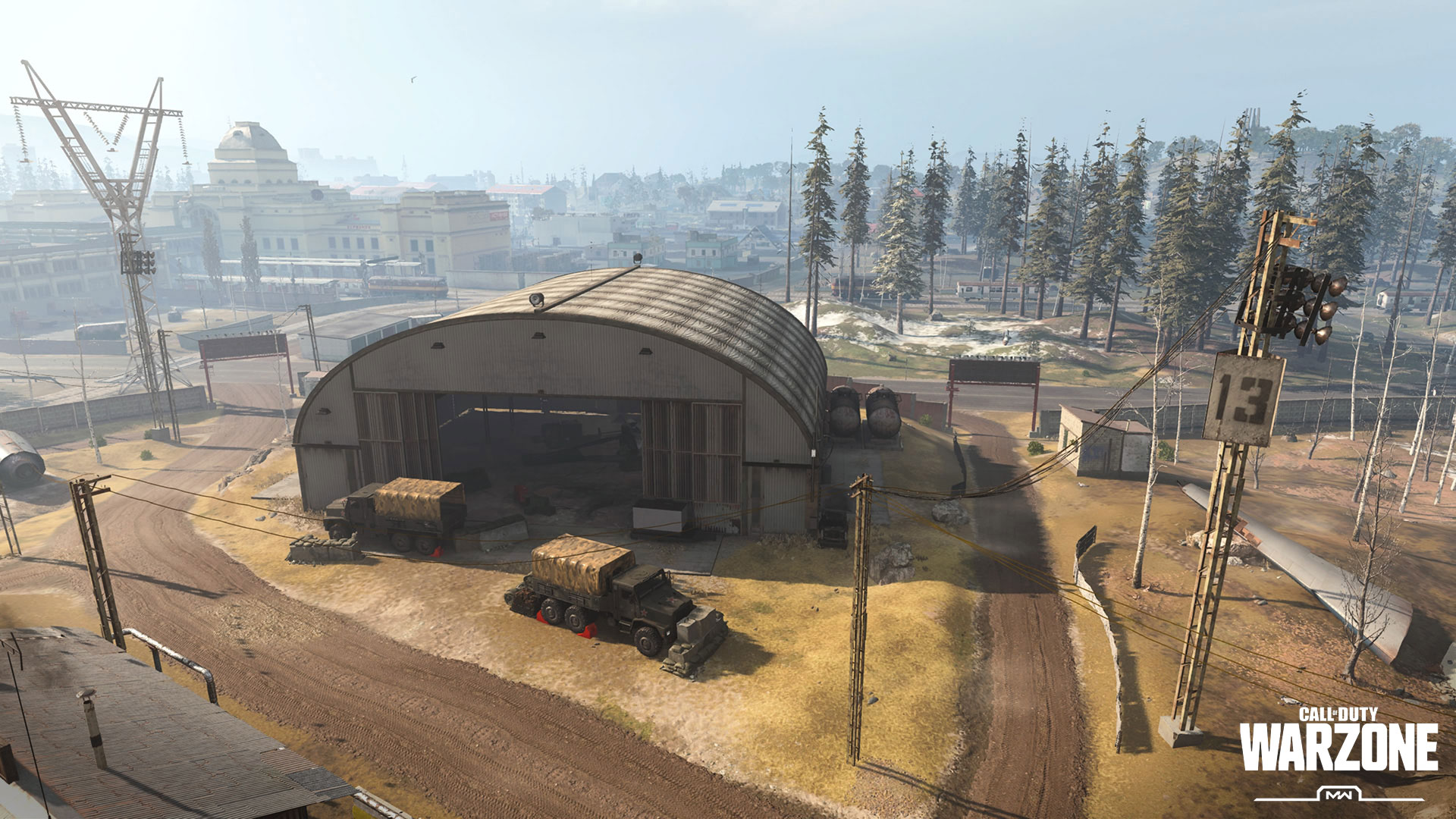 Within the Zhokov Boneyard, any weapon can be used in a preferred combat scenario; with enough practice, your squad will be able to draw enemies to an advantageous battleground inside the Boneyard and slay them.

If your squad likes close-range engagements, try to force action in the Scrapyard, which was built as a traditional Call of Duty Multiplayer map and rewards fast-paced combat. On the other end of the spectrum, long-range sniping duels tend to take place across the wide stretches of rolling fields, with snipers taking cover inside fuselages or behind rocks and scrap metal.

Those who have access to long-range weapons might also gravitate either towards the Scrapyard or northern Offices, where there are multiple places to claim as a sniping perch. Scrapyard Warehouse 3 and the north Office rooftops provide some of the best vistas in the entire area, while the Office within Scrapyard is a great counter-sniping point.

As for fighting from outside the Boneyard, or invading here from elsewhere, there are few points of resistance you will face, given how open this area is. You will need to watch out for snipers on top of those above buildings or elsewhere around the Boneyard, but in general, your squad might not face much difficulty getting in the Boneyard…

But getting out of it is a whole different story. 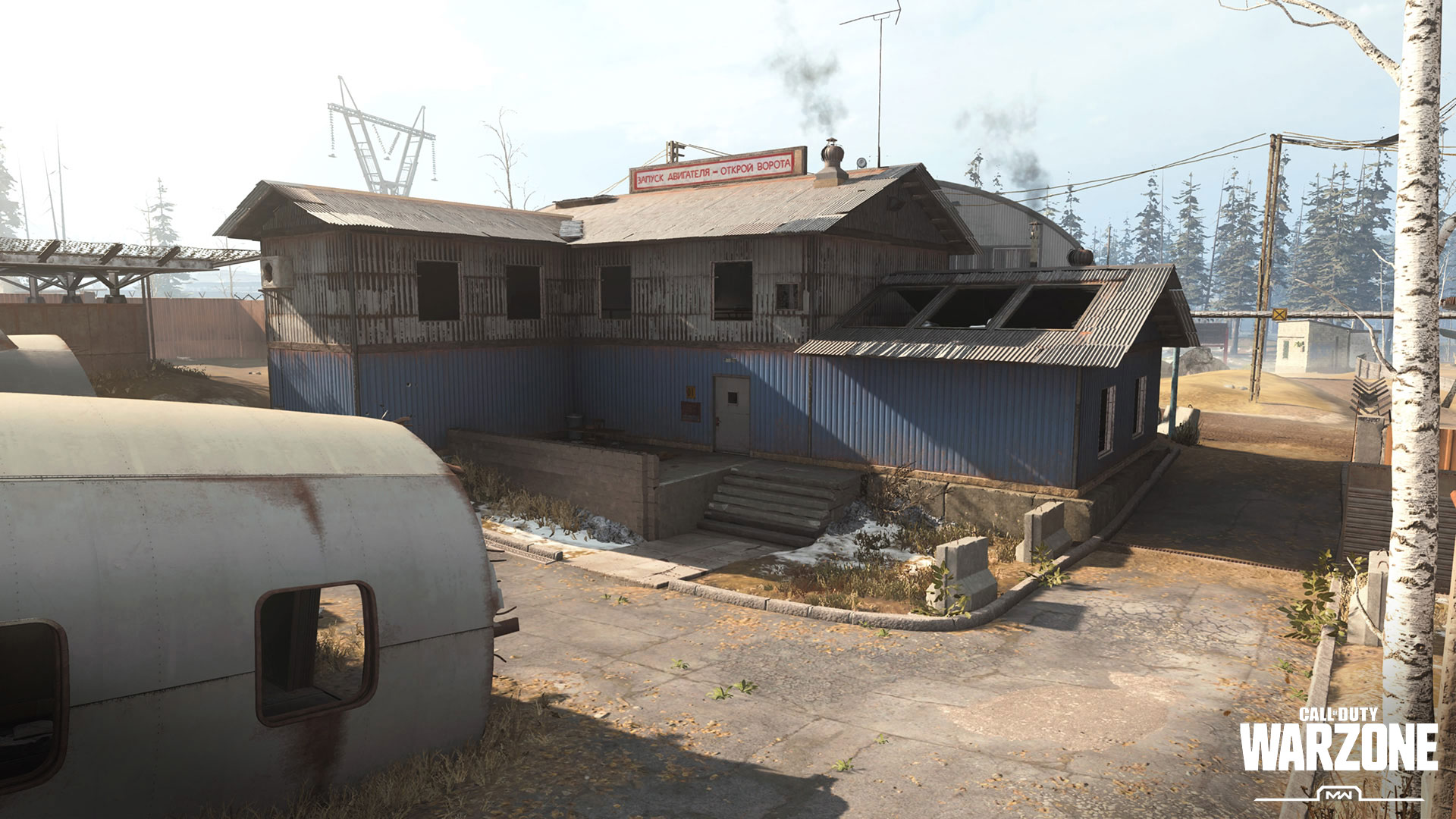 In summary, here’s what you need to know about the Zhokov Boneyard:

5. Boneyard: Far From Bone Dry. From the hangars to the numerous broken planes, the Boneyard has no shortage of loot despite being a dumping ground for scrap metal. Follow your Tac Map to see where Contracts are and be meticulous when exploring the area to find some serious loot.

4. Picking Up Scraps in the Scrapyard. Scrapyard will be familiar ground for Call of Duty veterans, which may make it a hotly contested area if it is inside the circle. Prepare for close quarters combat within the fuselages, warehouses, and office… And don’t forget to check the catwalk of Scrapyard Warehouse 3, one that’s been a notorious sniper perch for decades.

3. Shoot for the Silos. Are squads beating you to the Boneyard buildings? Call an audible on your drop point and land at the Silos and Boulder Town area. There could be some Supply Boxes, loot, and contracts that go untouched, and your squad can either make a break for the west or start cleaning up the scraps in the Scrapyard.

2. Watch those Warehouses (and Buildings). Snipers prefer to hole up on top of the north Offices or, as veterans know, on the infamous Scrapyard Warehouse 3’s catwalk or the Office. As time ticks by in the Boneyard, watch out for sniper glints that may appear from these great vista points.

1. Landing in Hot. Zhokov Boneyard is one of the more popular landing locales in Warzone. If your squad isn’t ready to fight once those boots hit the ground, either land in another area near here – the Junkyard, Train Station, or Graveyard – or prepare for a rather early 1v1 Gulag deathmatch.

For a more in-depth look at Verdansk, check out our Official Warzone Strategy Guide, which features an interactive Tac Map with over 300 points of interest – including the ones in the Zhokov Boneyard – along with tips that span from the initial infil to the Gulag.