Learn about all the Armistice Operators that you can play as in Warzone, as well as how you can customize them with their signature Finishing Moves.

Introducing the best in the business; the Operators.

These unique characters – each with their own backstory, nationality, character dialogue, character skins, and cosmetic customization options – have reported for duty as part of one of two opposing factions: Coalition and Allegiance. However, in Warzone, these Operators combine to form Armistice, a joint-ops task force whose sole goal is to survive, no matter who is on their side or against them.

At the main Operators menu screen, you have the option to choose either Coalition or Allegiance as your favorite faction. When you queue up into a Warzone match, you will be the Operator that is on your preferred faction.

The Operators menu screen is also where you can preview Operators and any Operator skins you may have unlocked.

While the Default Operator is pretty cool, you can unlock many of the others through gameplay challenges in the full Modern Warfare® experience, purchase them or their skins in the Store, or by unlocking tiers in the Battle Pass system. In fact, you can obtain an initial Operator Skin just for completing the mandatory Warzone Orientation Tutorial!

Those that already have a Modern Warfare profile will find all of their Operators and skins available in Warzone. Also, players will earn an Operator once they complete the Orientation Tutorial.

Due to the temporary truce between factions, your Warzone squad can be comprised of any Operator from either faction and any Fire Team. You can unlock additional Operator skins in the Store, via the Battle Pass system, and by completing Missions in the “Missions & Challenges” menu, as you progress through the Battle Pass system. Get those Operators some skins and they’ll enter the Warzone with some serious style!

Note! Due to the temporary truce between factions, your Warzone squad can be comprised of any Operator from either faction and any Fire Team.

If you purchase an Operator skin in the Store or unlock a skin in the Battle Pass the Operator automatically becomes available, even if you haven’t completed his or her associated Challenge yet. These Challenges require you purchase the full version of Call of Duty: Modern Warfare.

You can unlock additional Operator skins in the Store, via the Battle Pass, and by completing Missions in the “Missions & Challenges” menu, as you progress through the Battle Pass. Get those Operators some skins and they’ll enter the Warzone with some serious style! 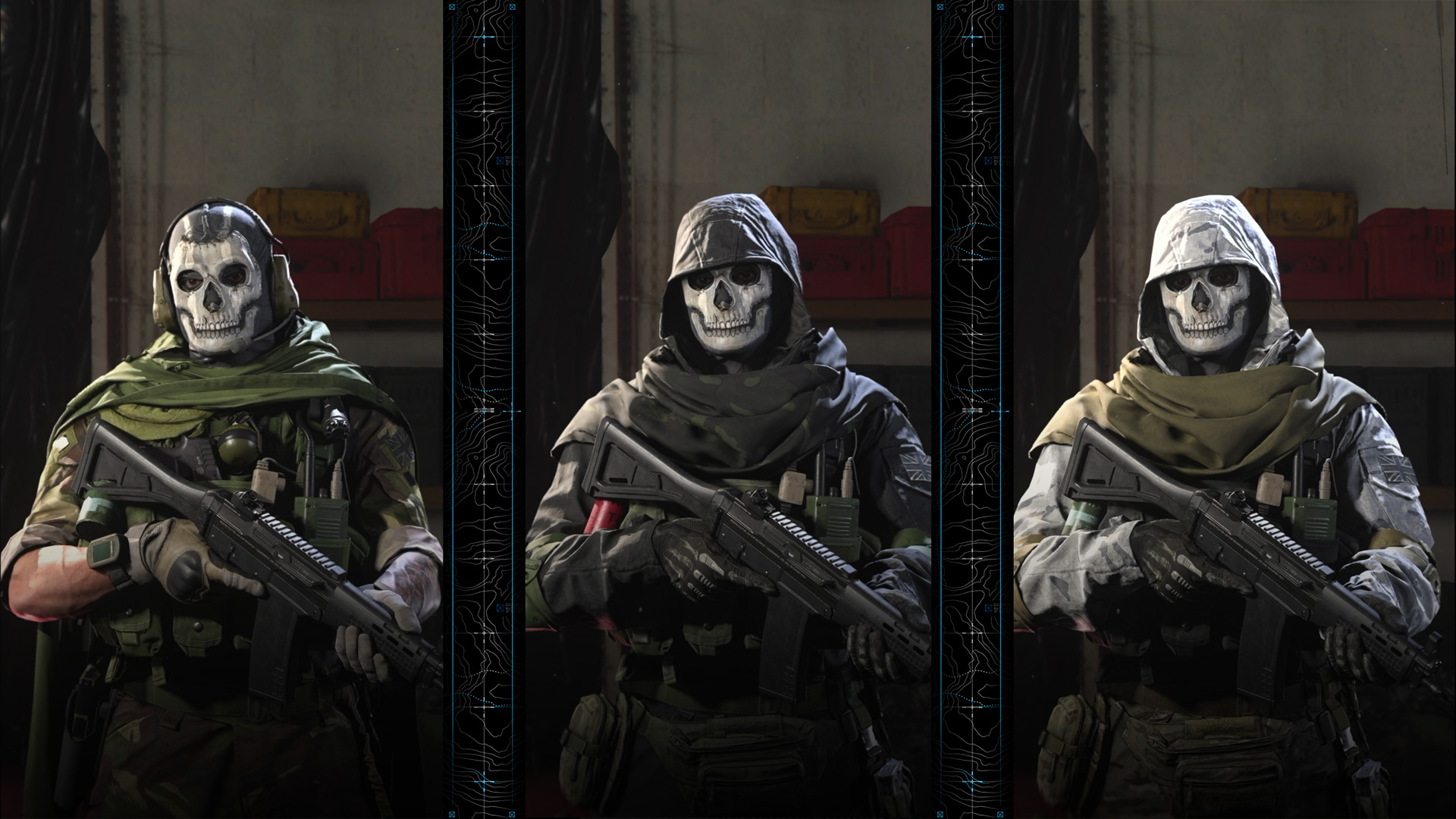 Background: An expert in clandestine tradecraft, sabotage and infiltration. He lives with a redacted past and an undercover present, marked by a concealed appearance to hide his identity and maintain anonymity in the field. 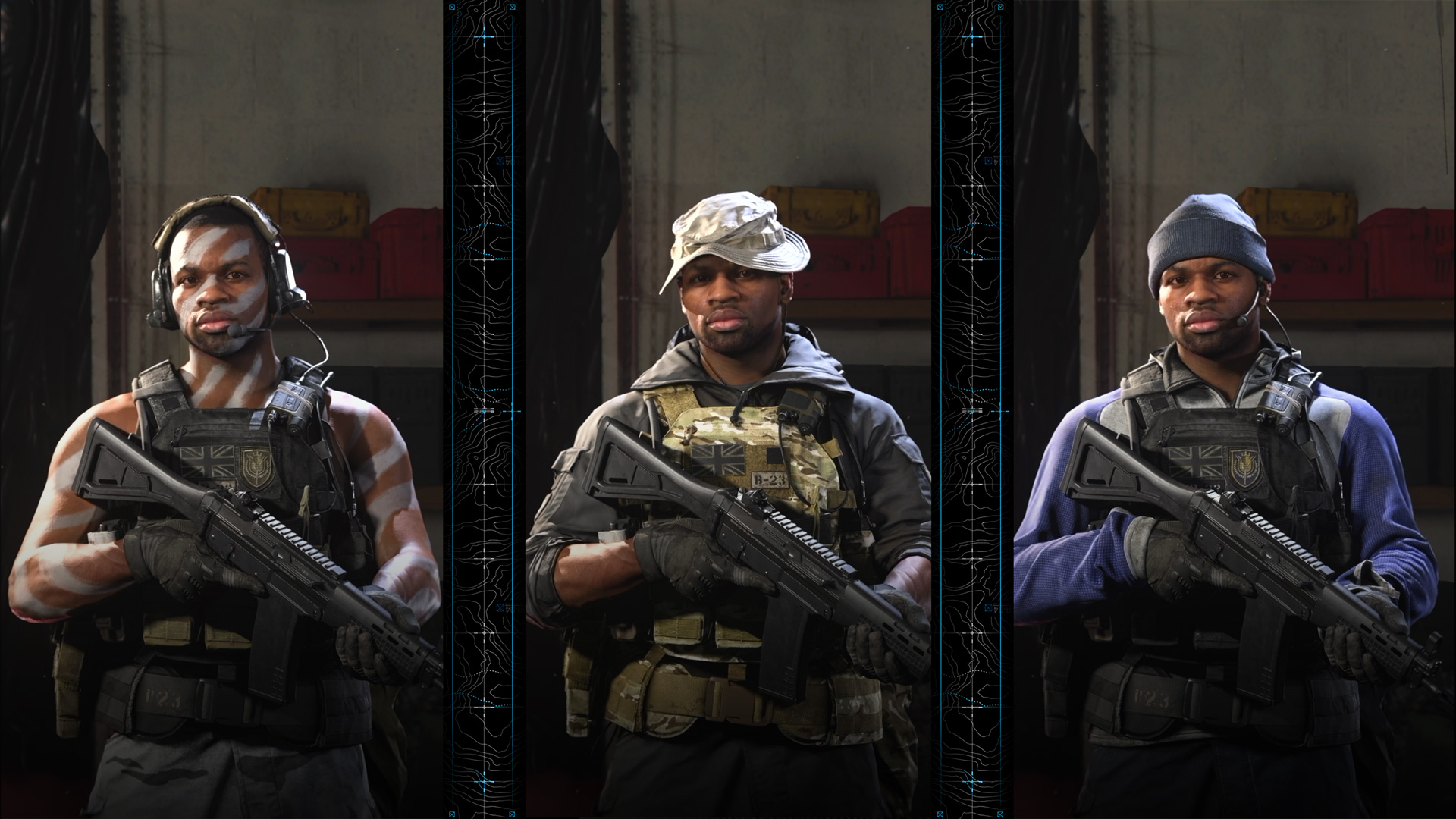 Background: Known as “Union Jack” to his peers. Served with distinction under Captain Price for three years until transfer for “ethical disagreements.” Chose officer track, achieved rank of Lieutenant. Hand-picked by SAS for the Coalition. 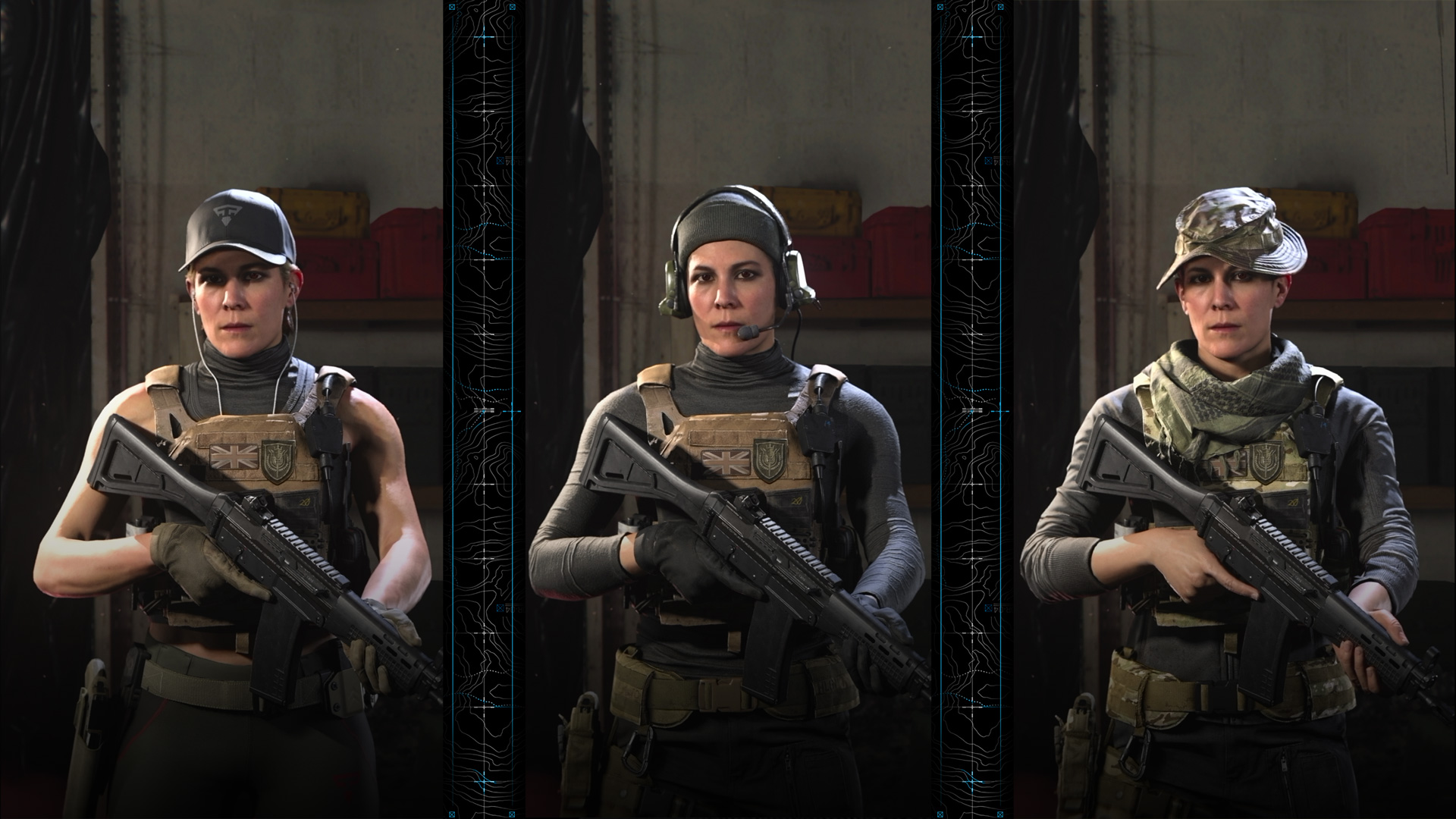 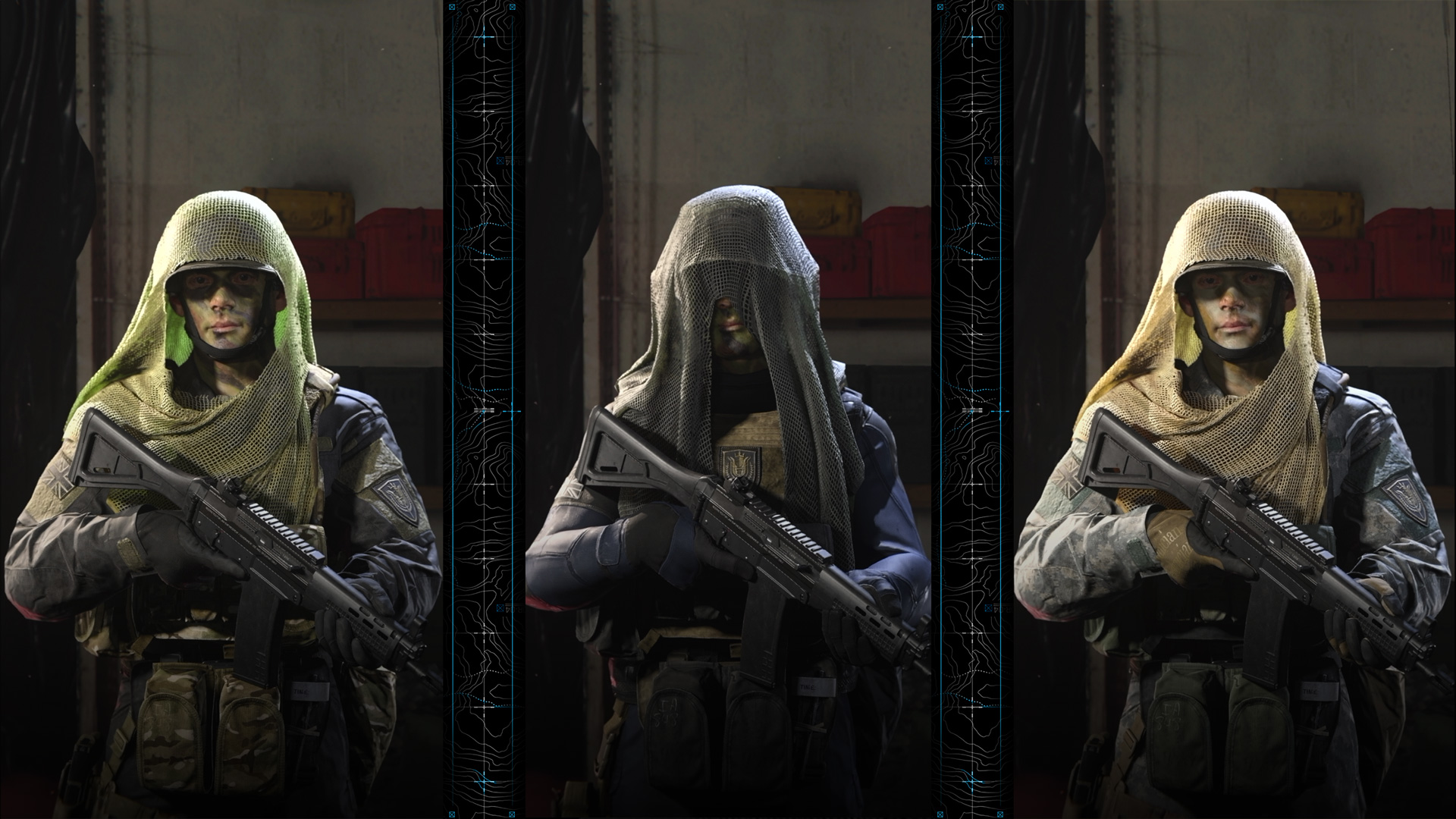 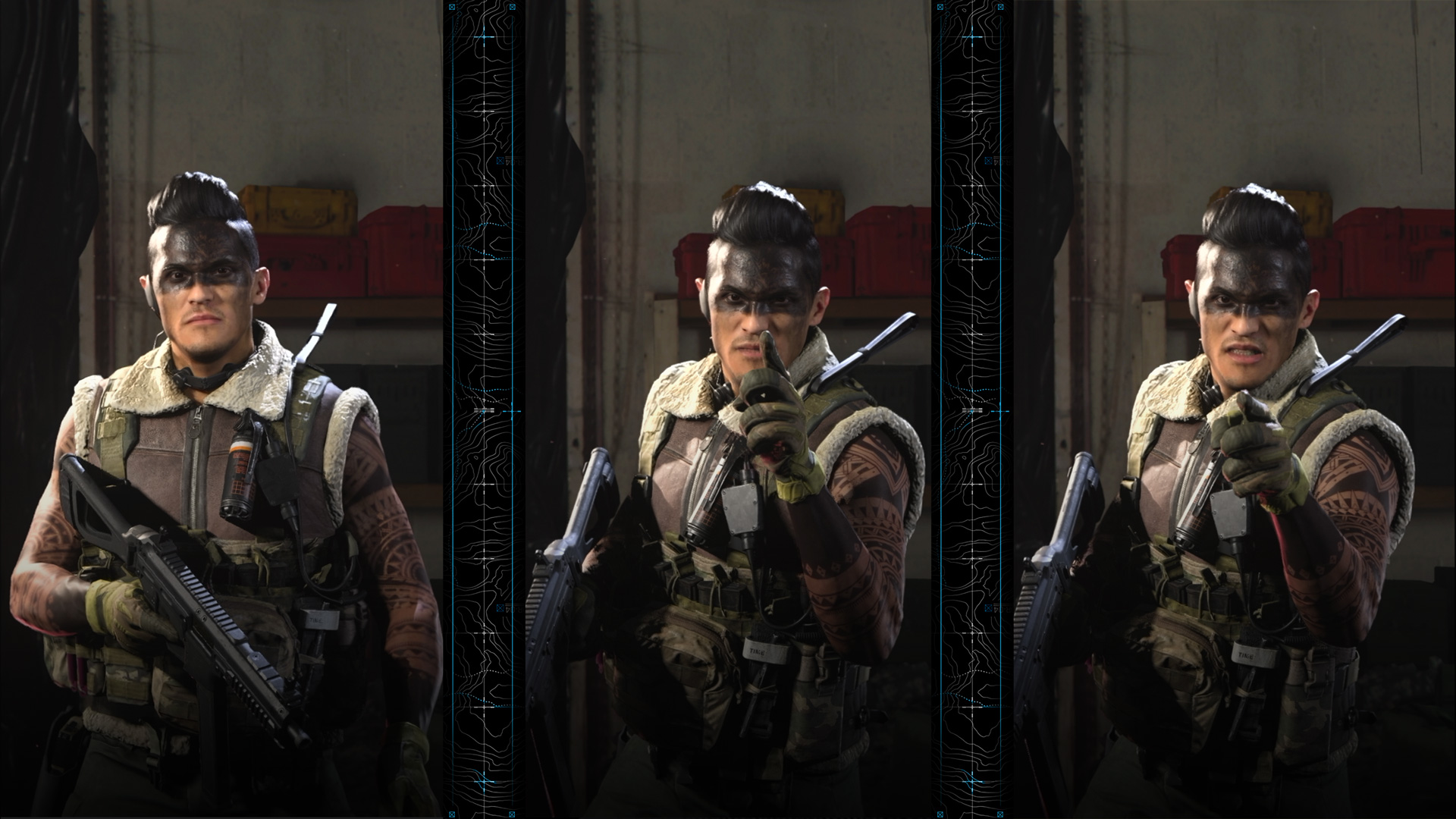 Background: Canadian Special Forces. Raised by a blended First Nation family in Ontario. Recommended to Warcom after serving with Griggs in Urzikstan. Earned commendations in daring midnight raid of an AQ encampment. 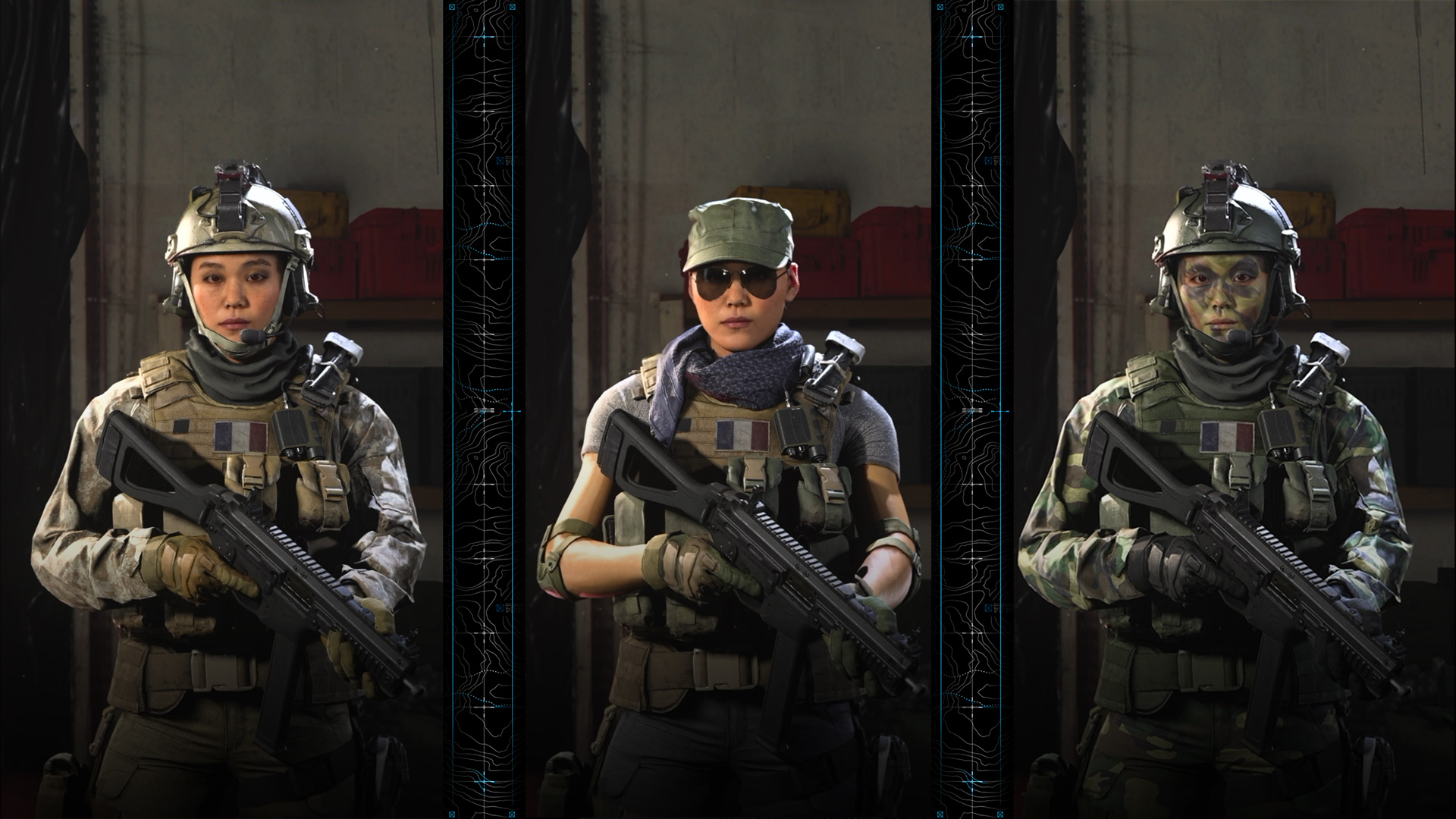 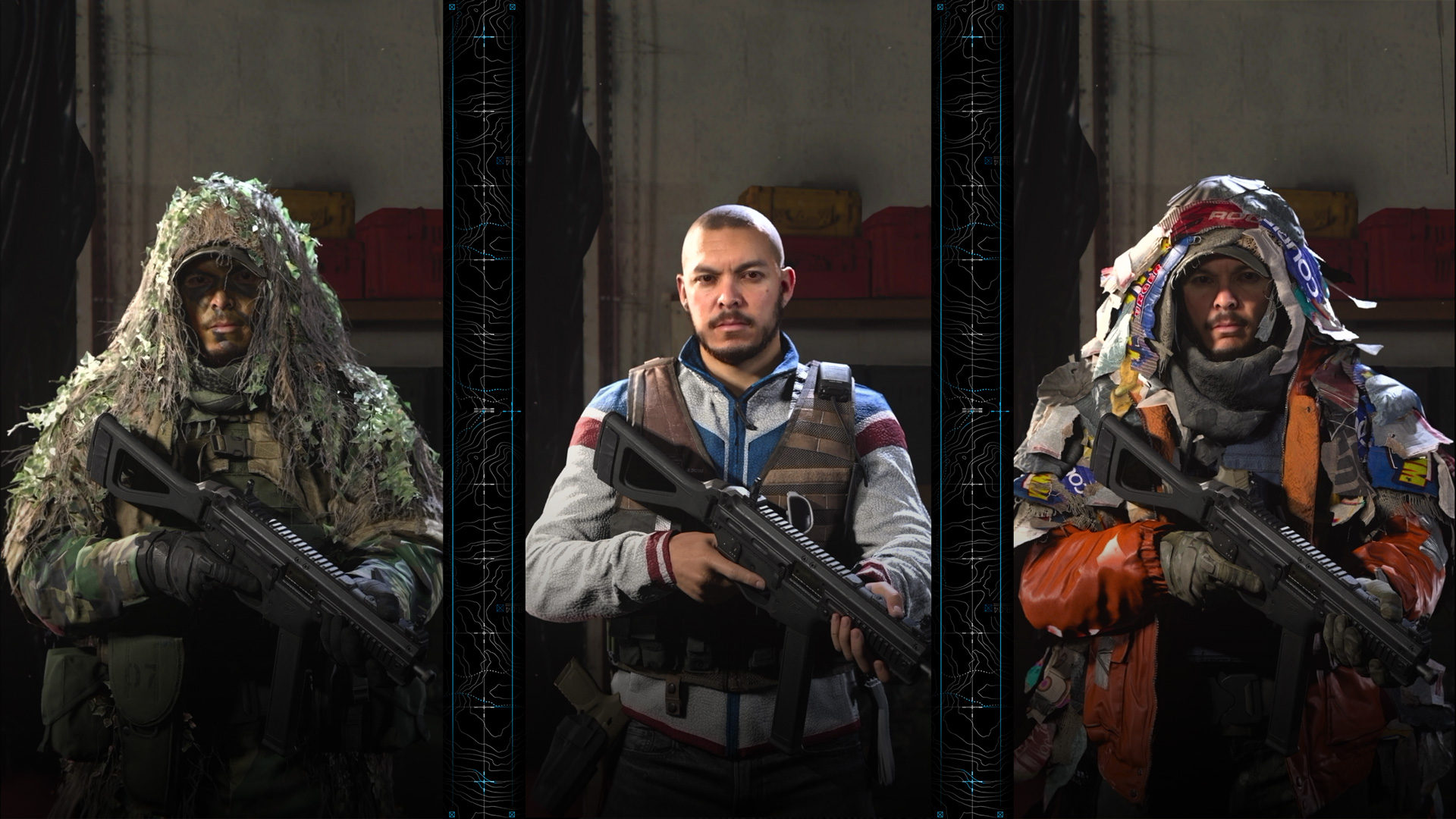 Background: Joined KSK, following family tradition of elite soldiers. Master bow hunter and wilderness tracker. Hunts the enemies of the EU in the harshest conditions on Earth. Enjoys reputation as an excellent cook and storyteller. 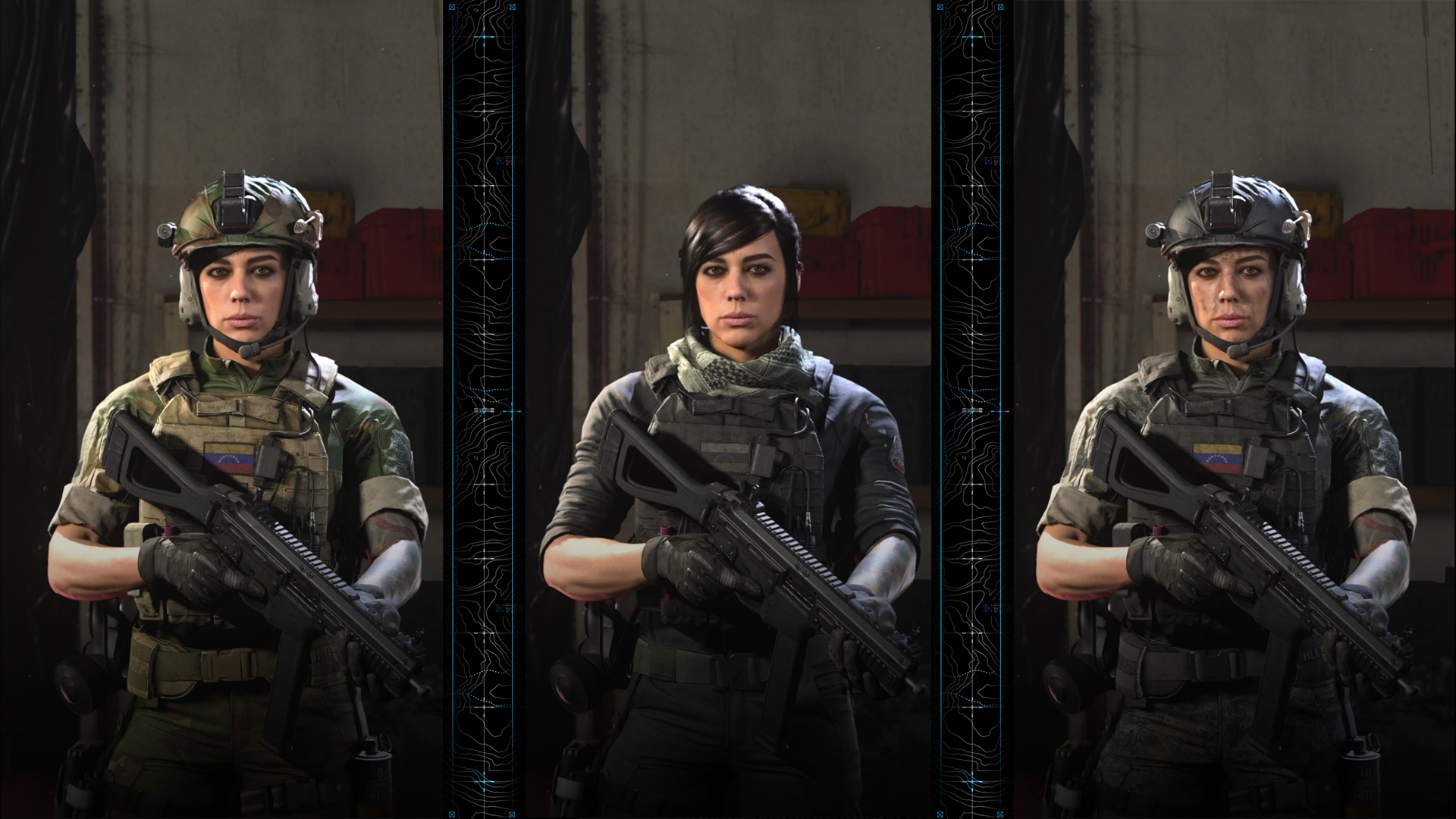 Background: Venezuelan national turned CIA asset at 15; provided intel for US to launch in-country covert ops against Al-Qatala sleeper cells. Volunteered for US SOF training. Conducted clandestine ops for CIA until invited to join WARCOM in 2017. 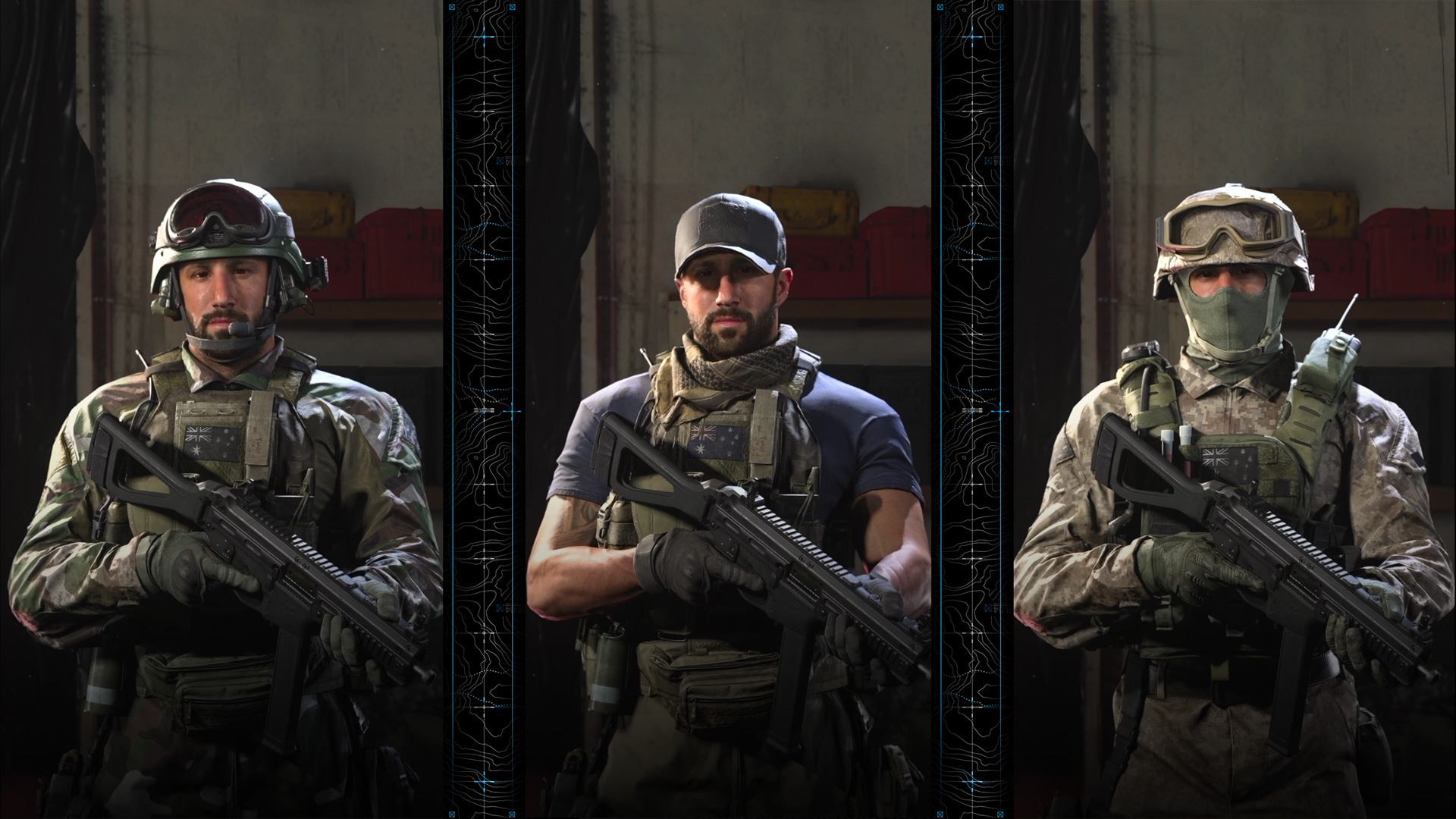 Background: Born in rural Tasmania, grew up on long-distance 4x4 expeditions into the bush. Described as “fearless” by friends and family, enlisted with Australian Army “for the challenge.” Proficient in navigating chaotic hot zones. 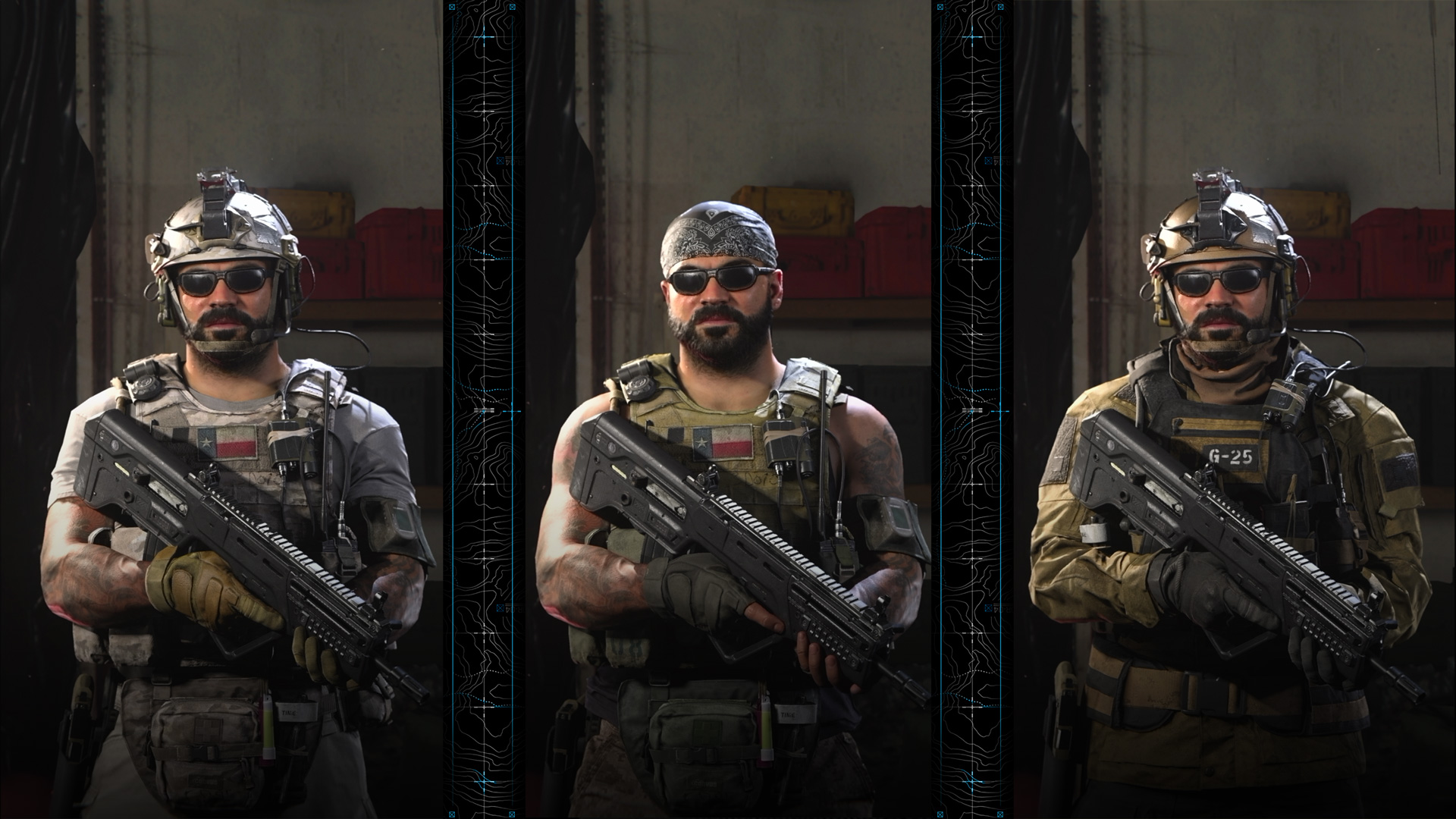 Background: West Texas native. Served with Army Rangers in Afghanistan, pre/post Iraq War. Discharged (Section 8) after failed rescue attempt of a teammate. Returned to Afghanistan as a PMC. Recruited by Alice to join the Demon Dogs. 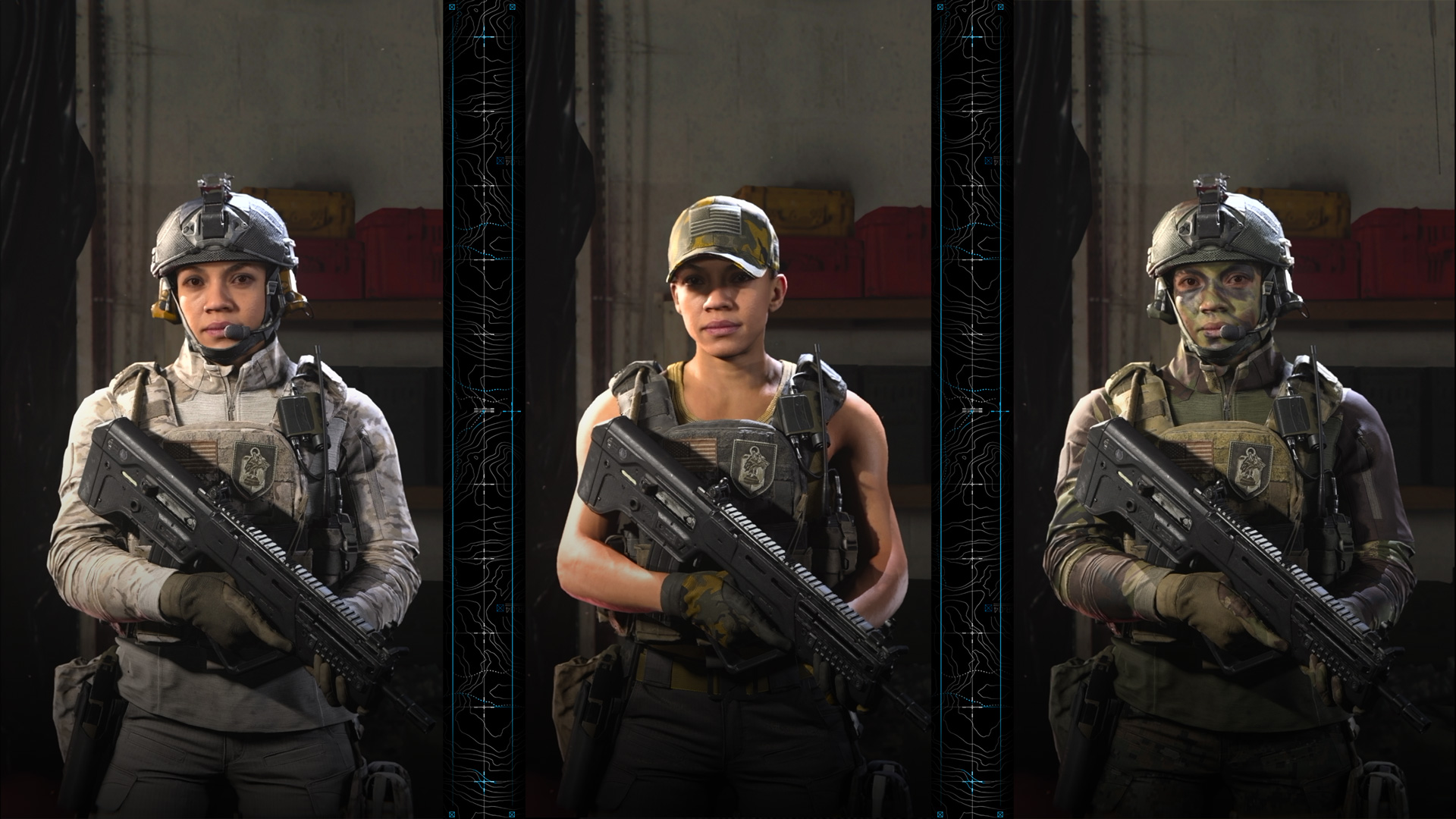 Background: Born a US citizen after mother immigrated from Sinaloa under asylum. Joined Army at 18. Despite “disciplinary issues,” passed selection for Task Force Orange. Served in Afghanistan, adept in combat and indigenous relations. 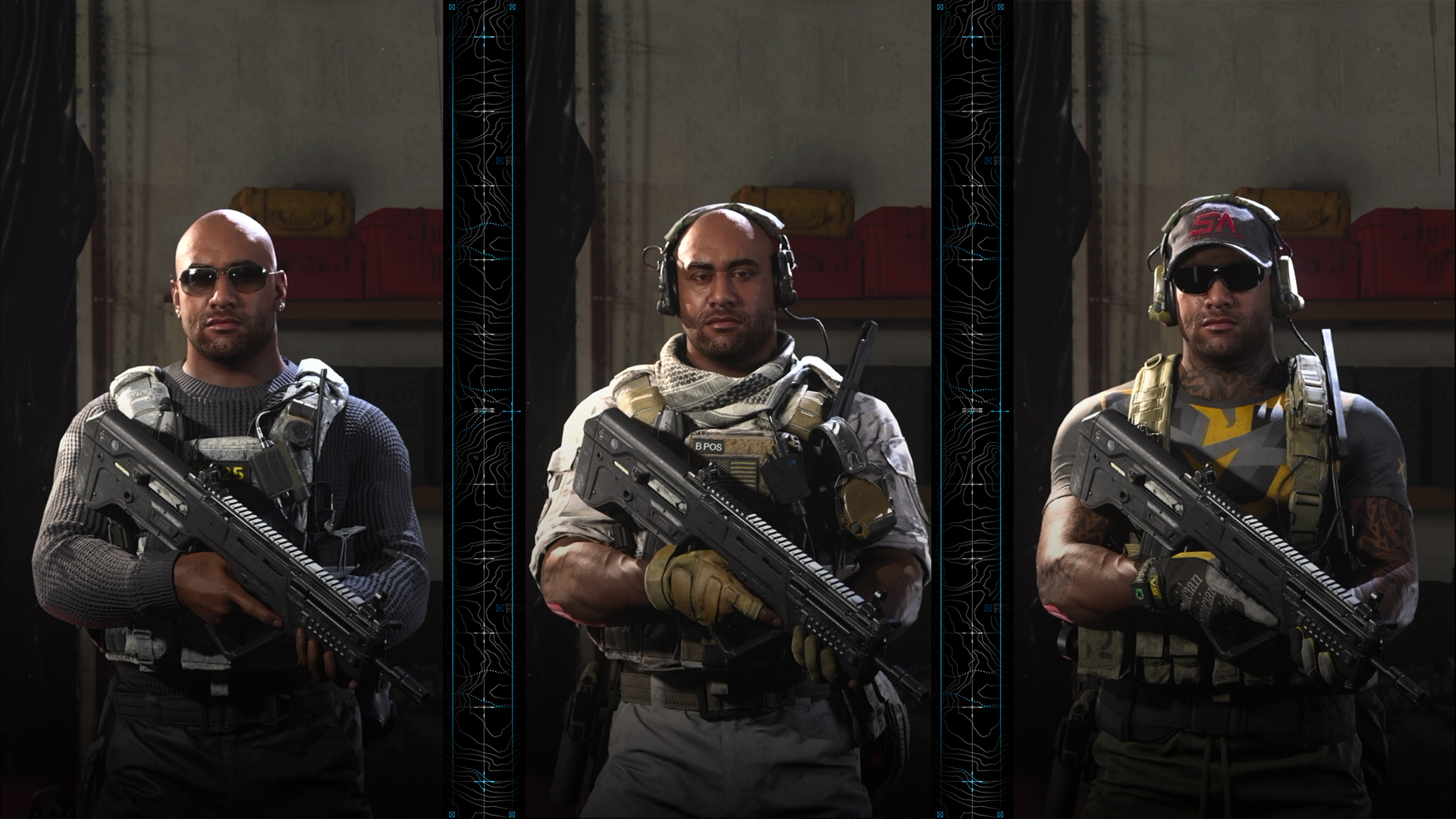 Background: Chicago born and raised. Expelled from high school after defending another student. Self-taught student of history. Joined Marine Corps to qualify for GI Bill, went career instead. Served in Iraq and Afghanistan as a Marine Raider. 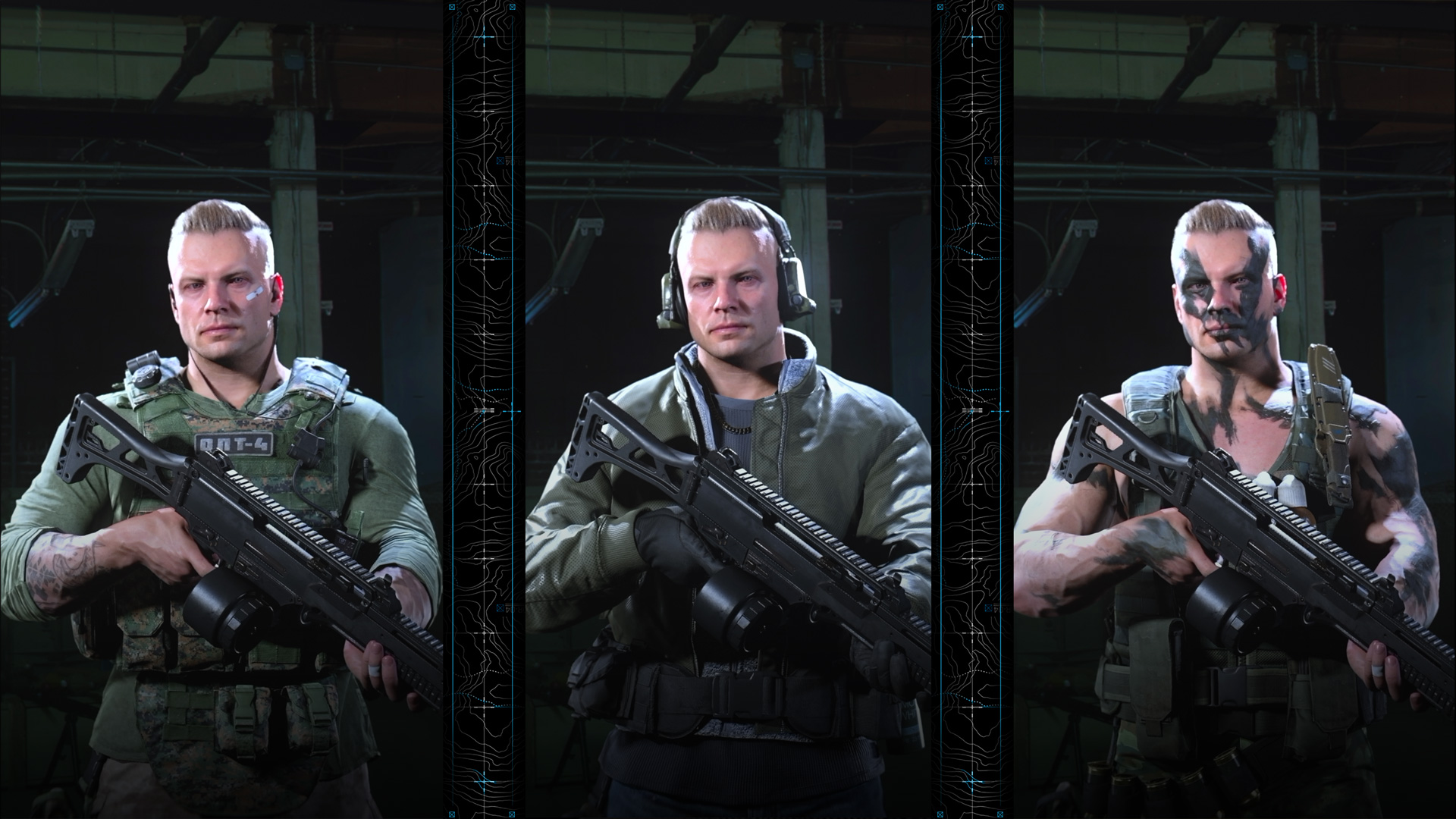 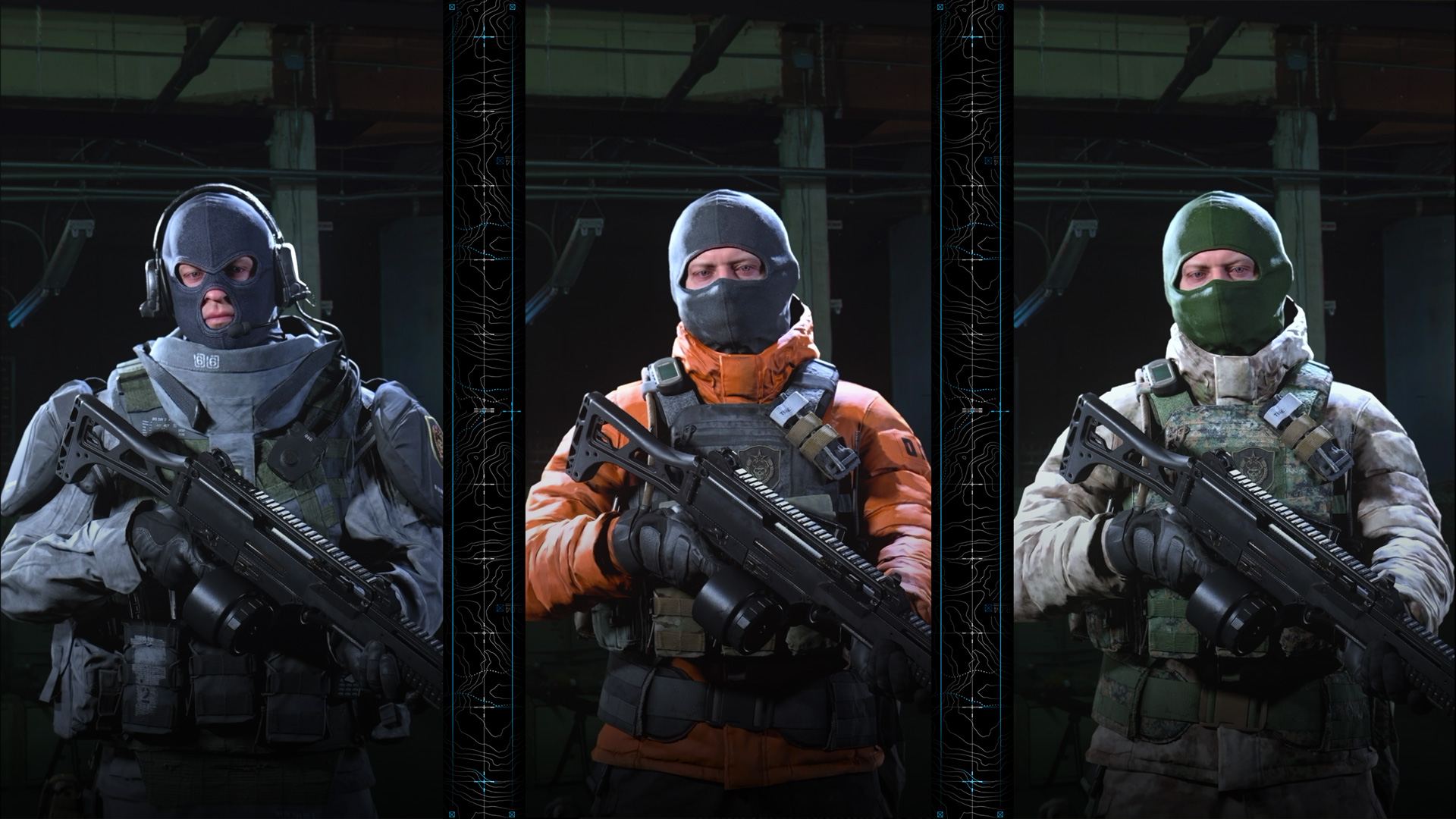 Unlock By: Complete the Into the Furnace Campaign mission (Modern Warfare full game) 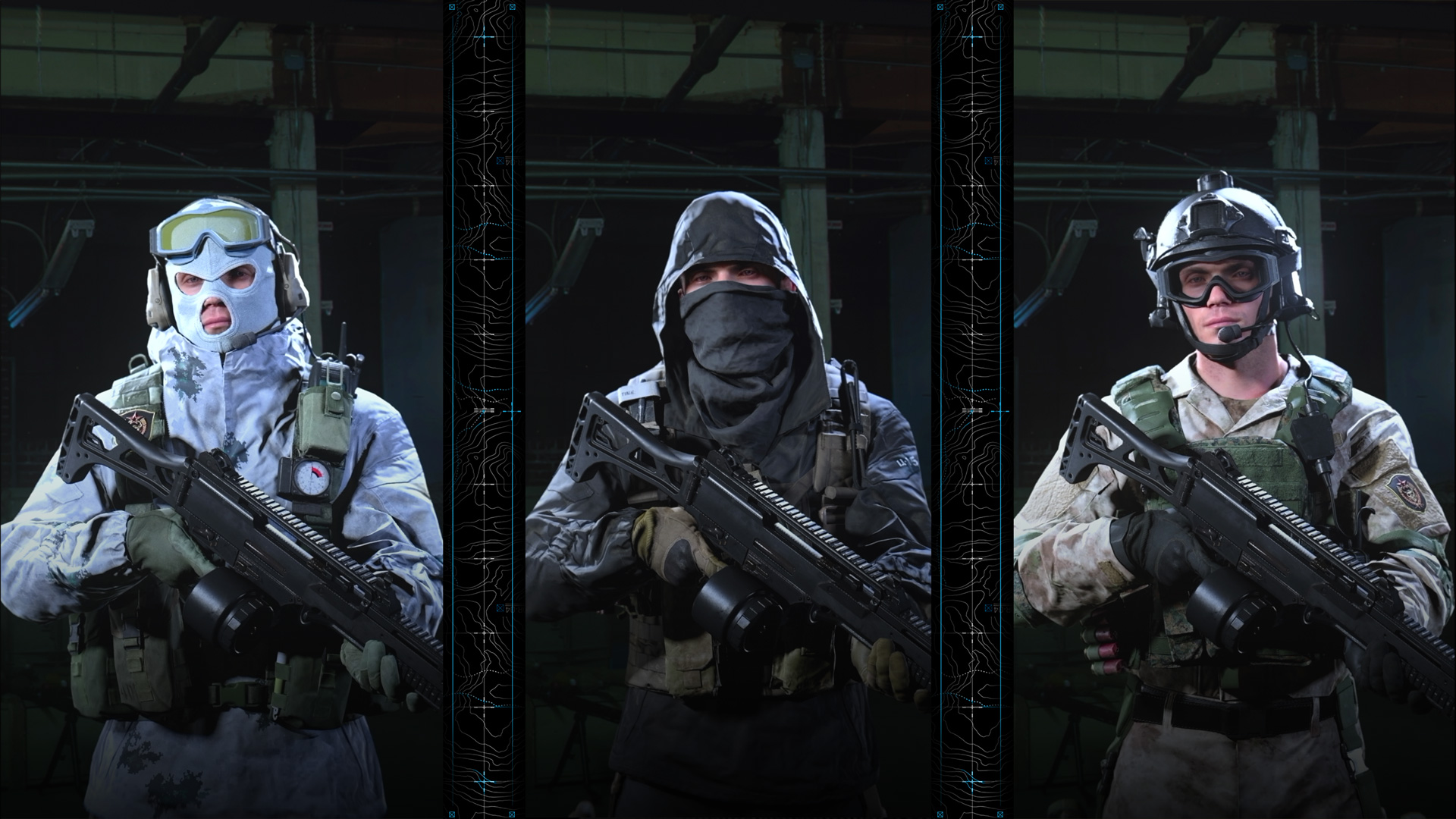 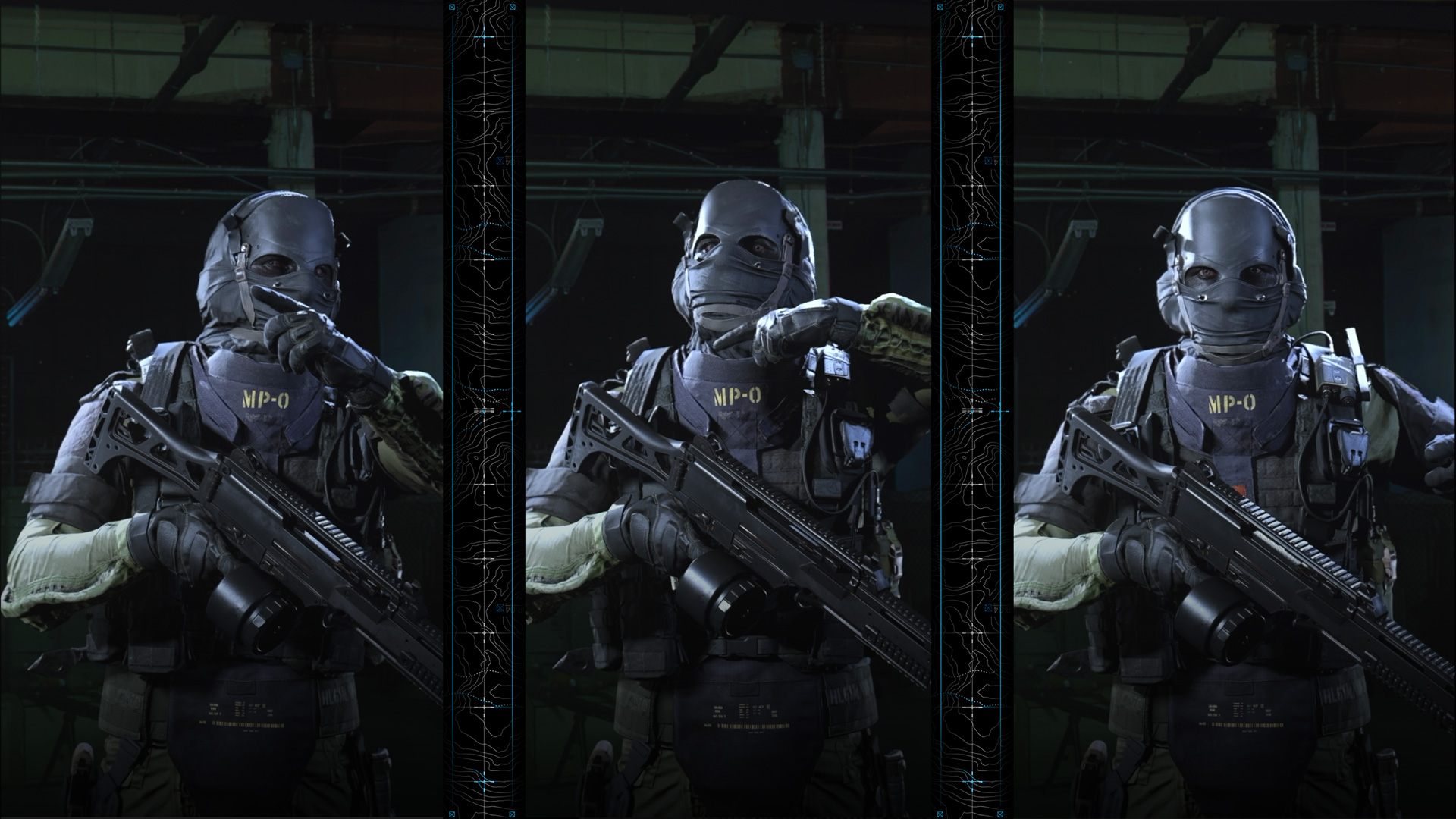 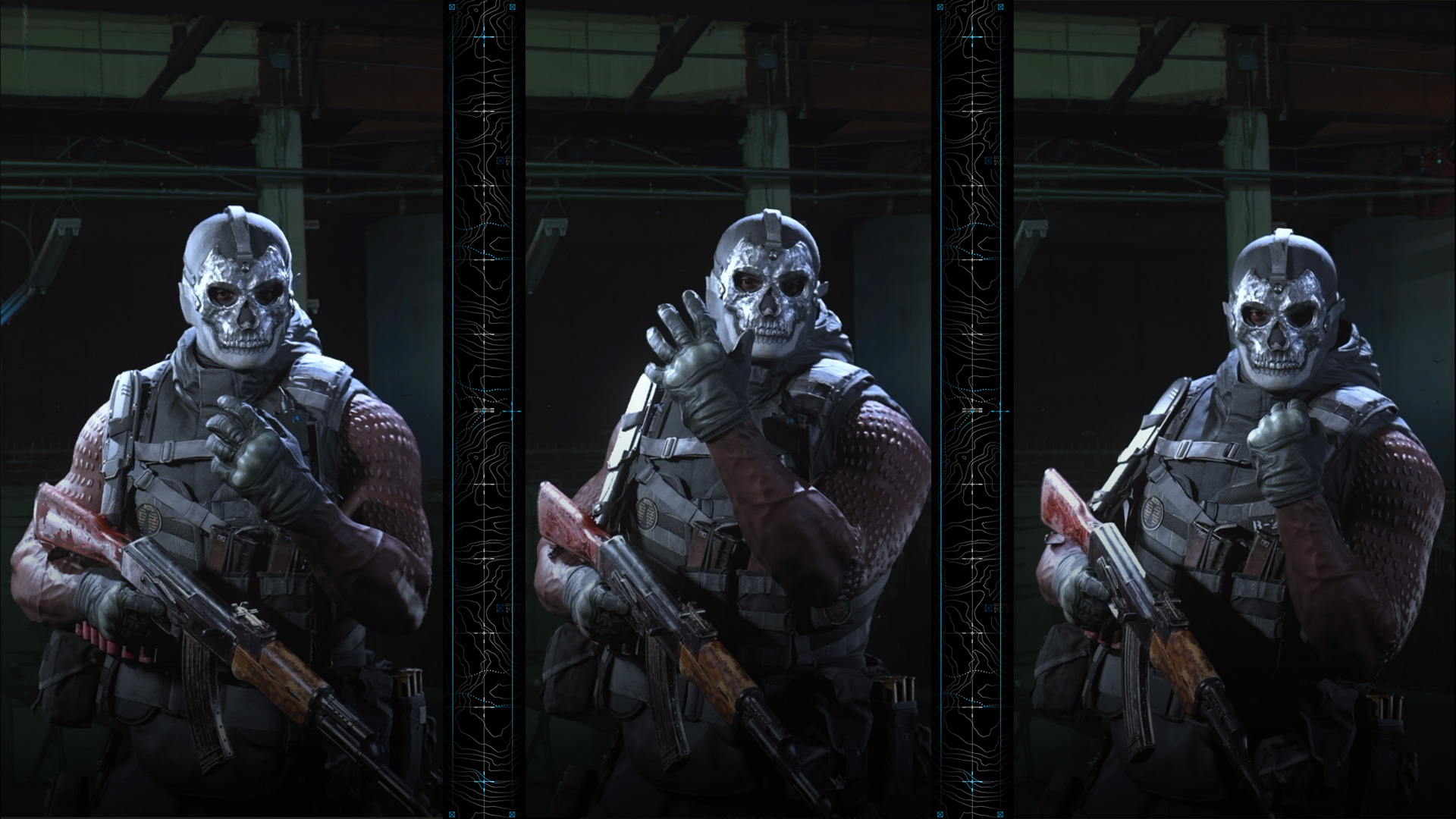 Background: Ex U.S. Ranger turned gun for hire. Joined Jackals cutting his teeth in the slums of Soweto, South Africa. Marked with traditional Zulu tattoos to honor his heritage. Has earned a reputation for being a vicious operator. 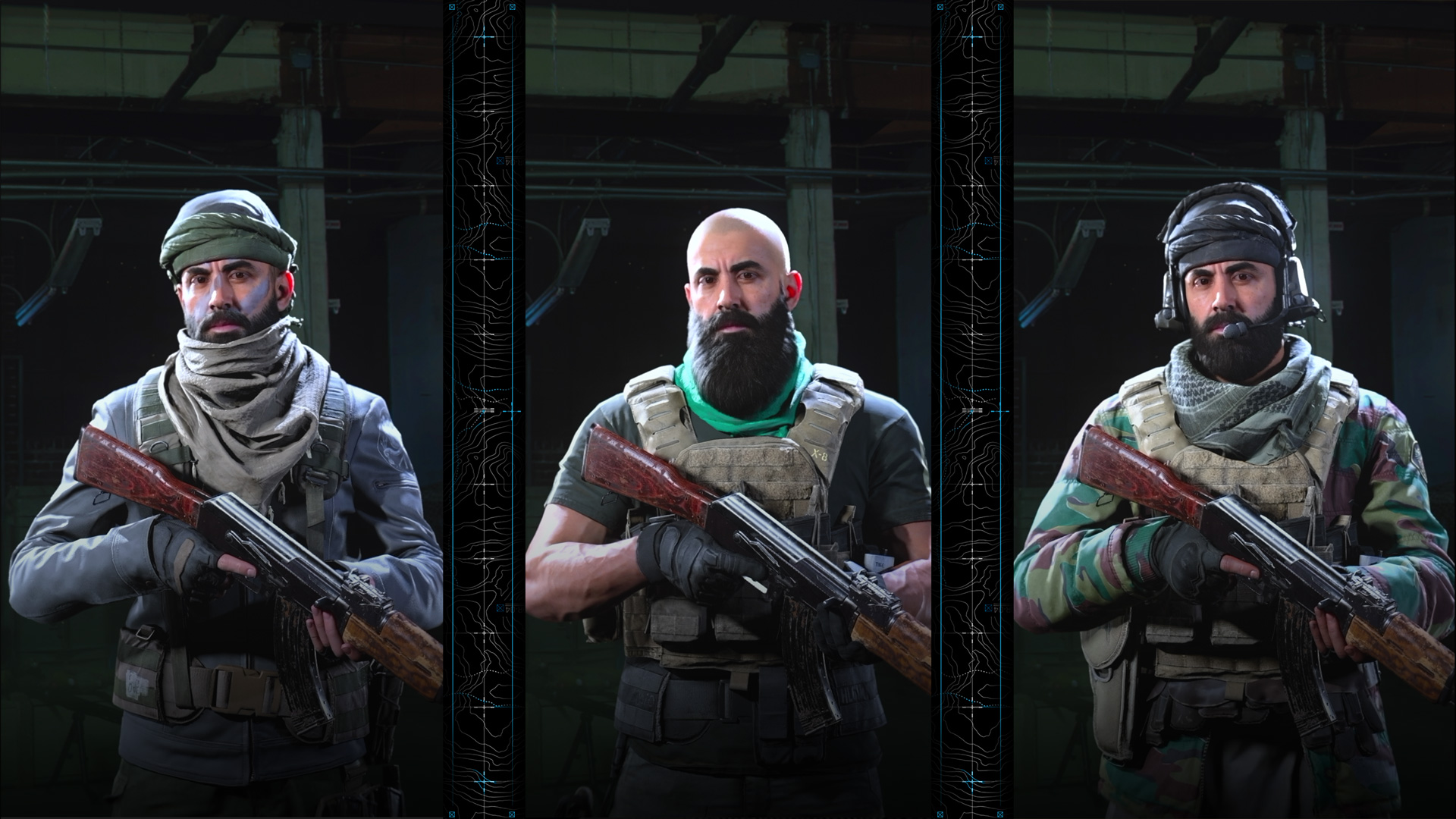 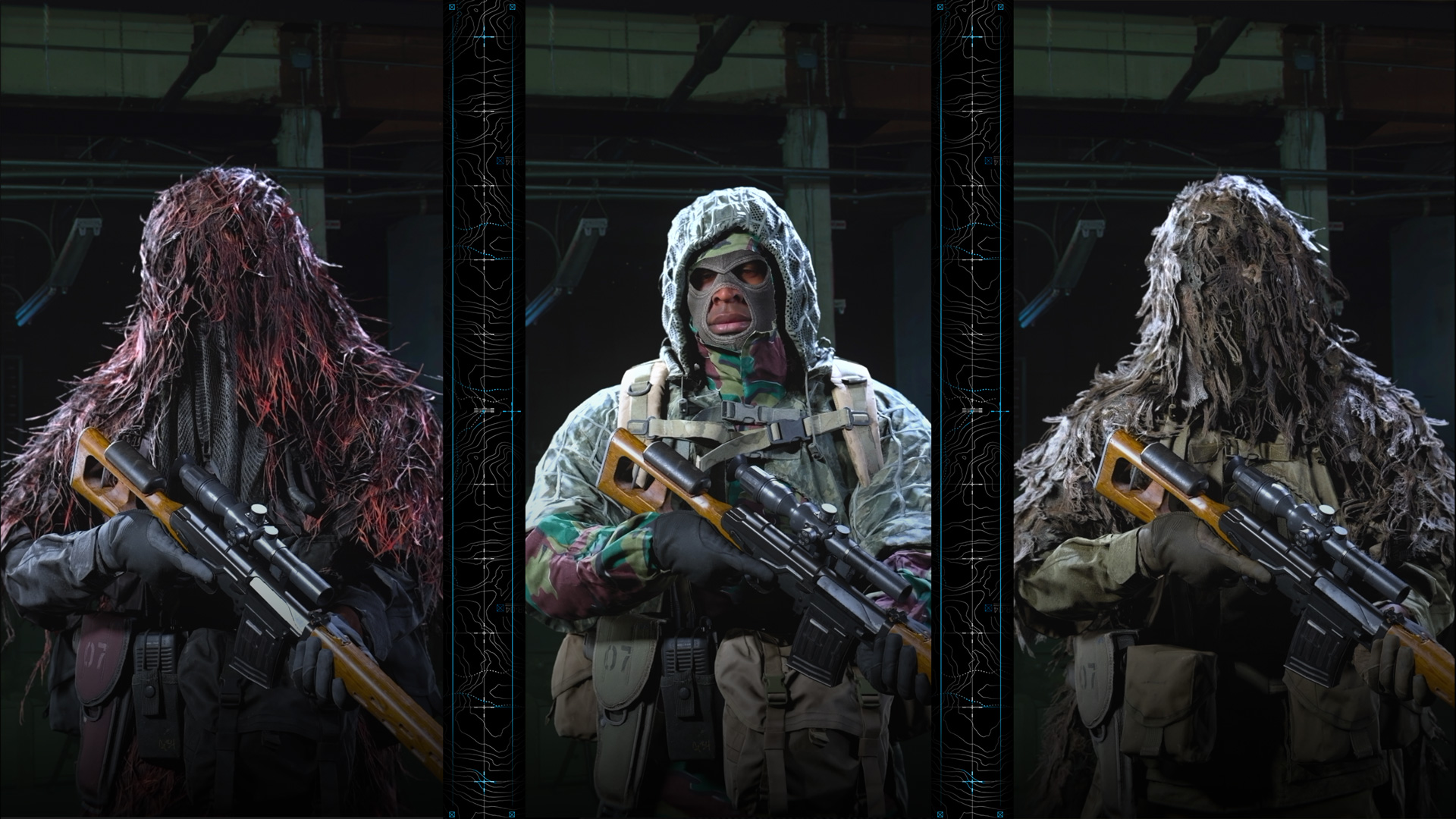 Unlock By: Get 100 Headshots in Multiplayer (Modern Warfare full game) 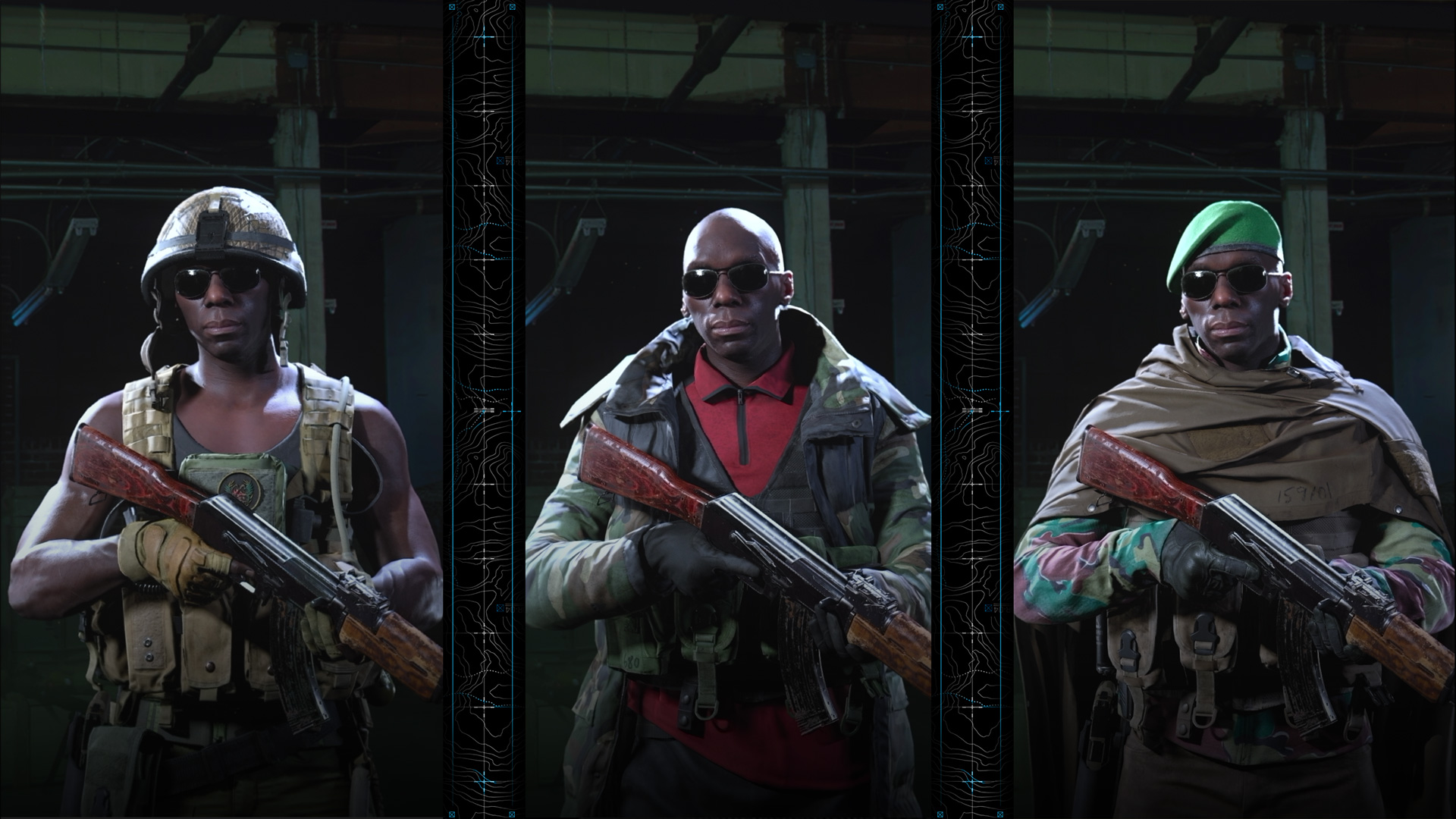 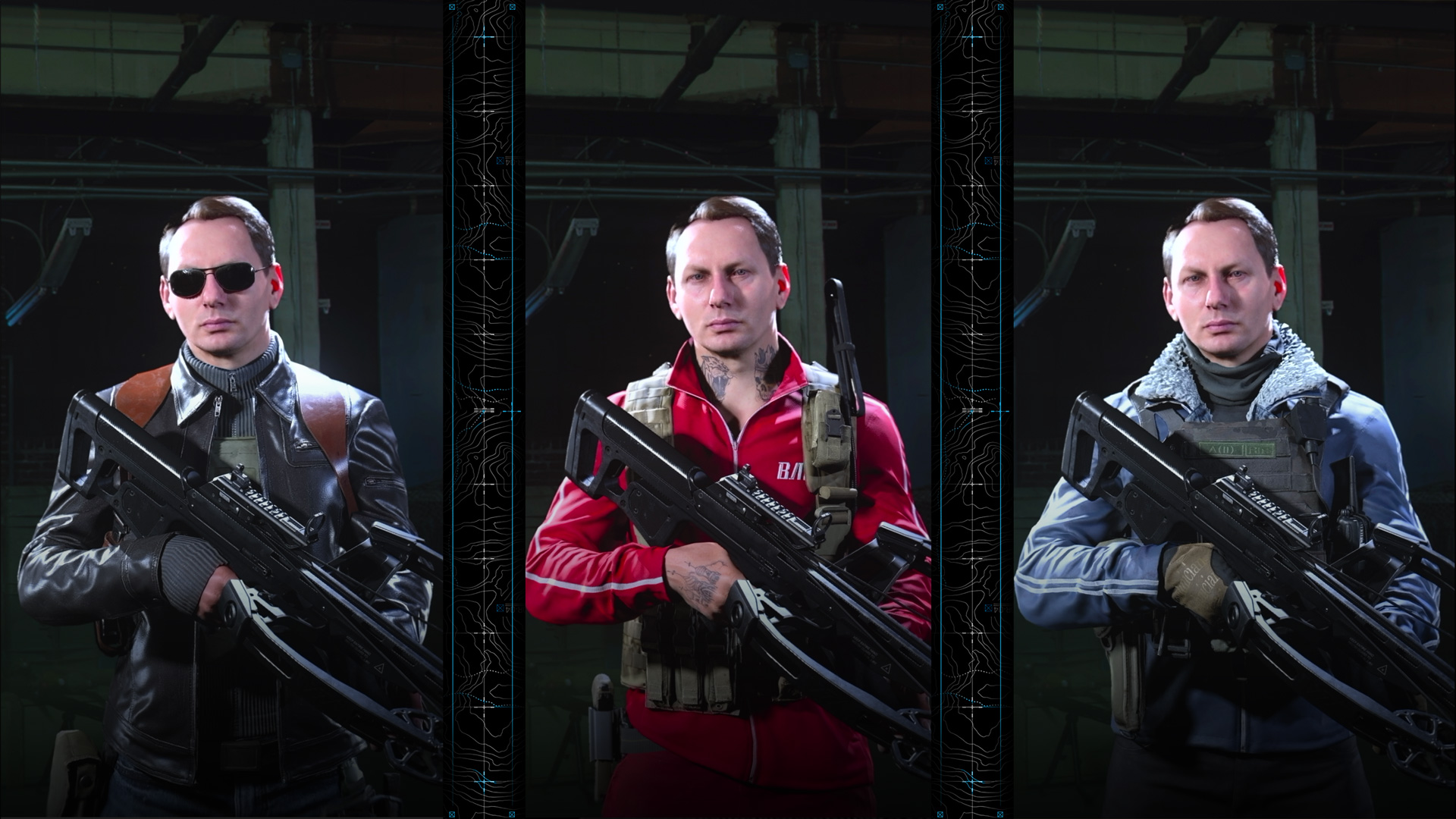 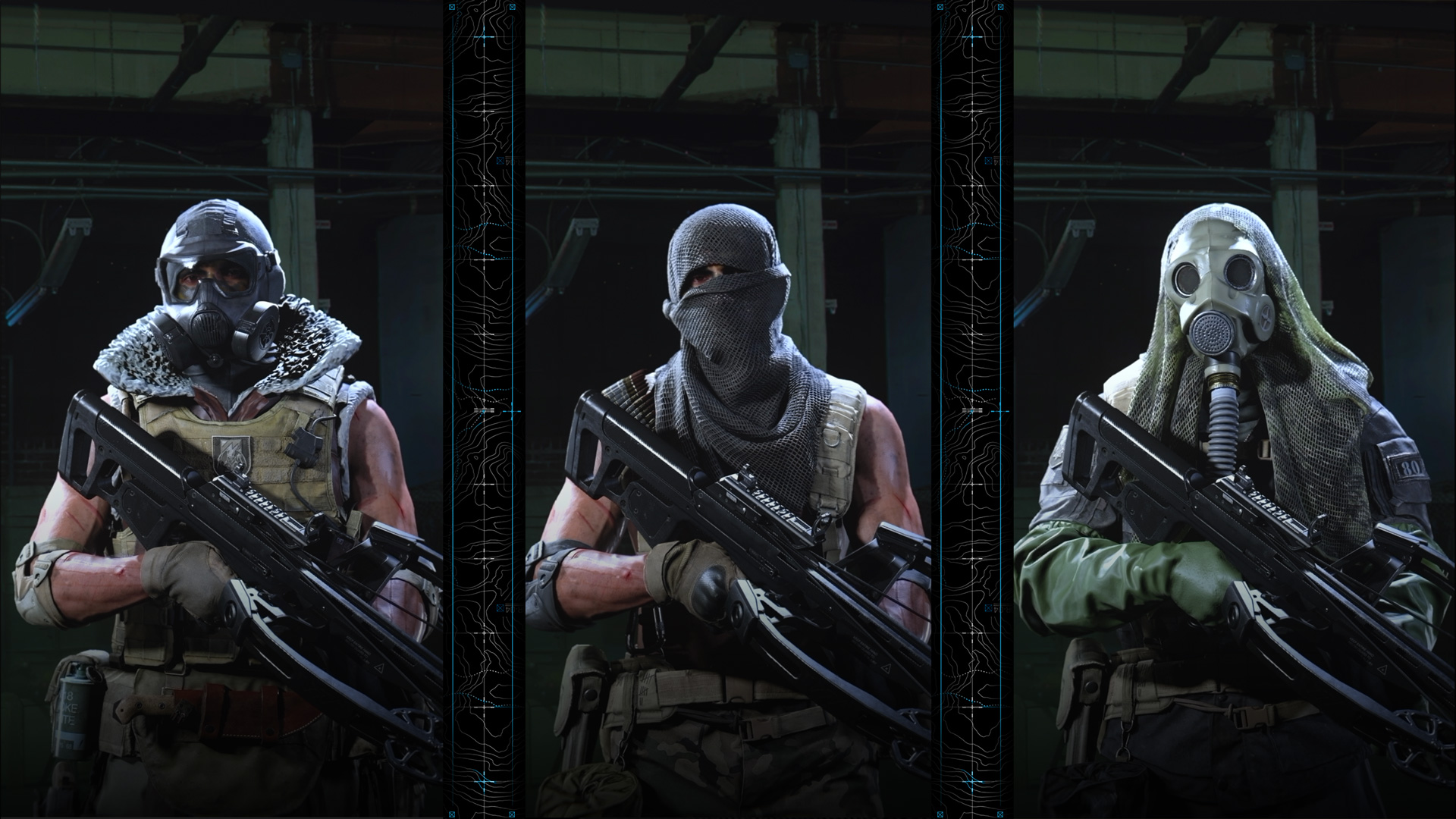 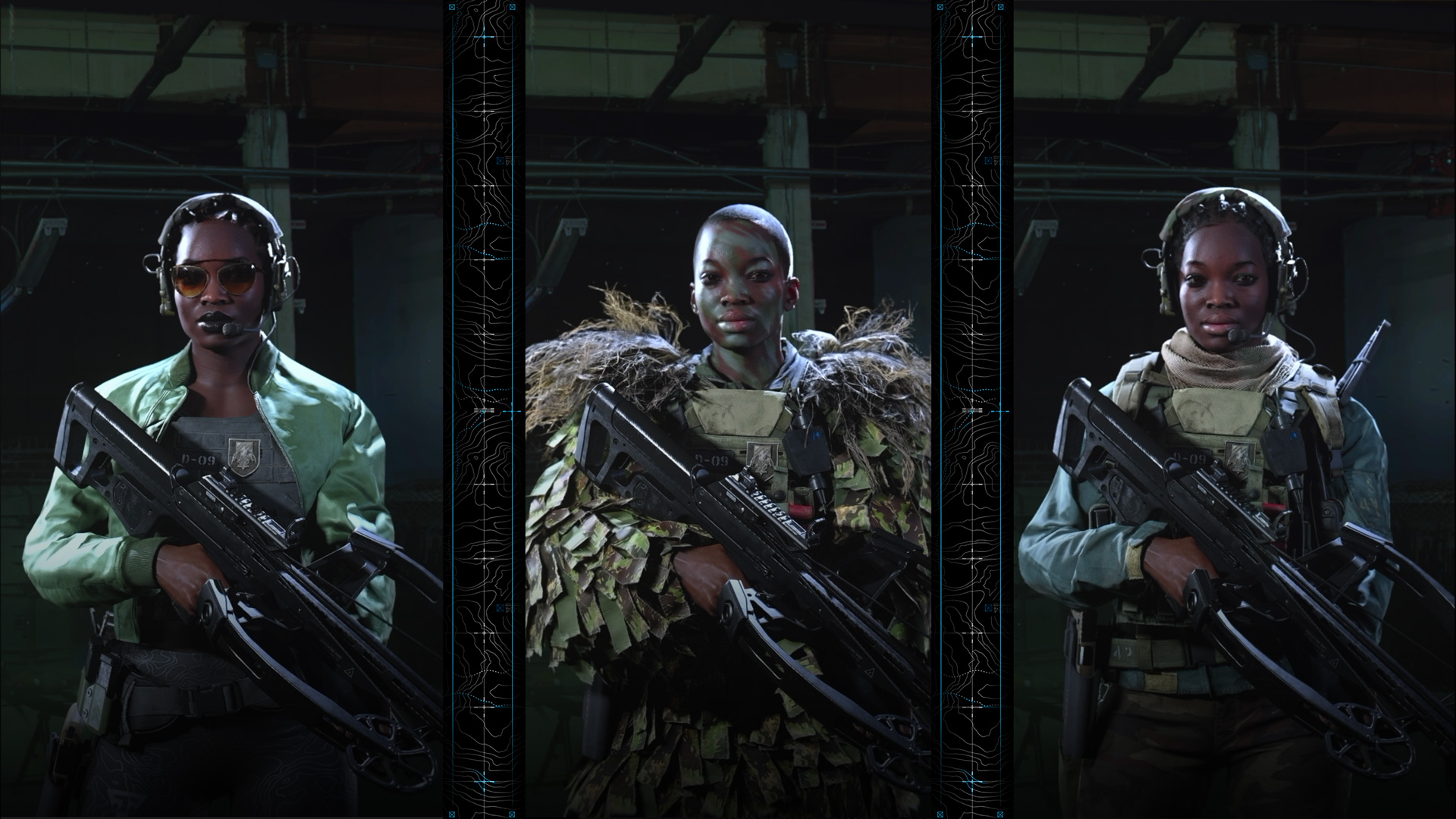 After you’ve chosen your favorite Operator, which can be swapped out between Warzone matches to any other Operator, be sure to head to the Operator Select and then the Customize Operator Menu to choose a specific skin, quip, and Finishing Move for them. Here’s how: 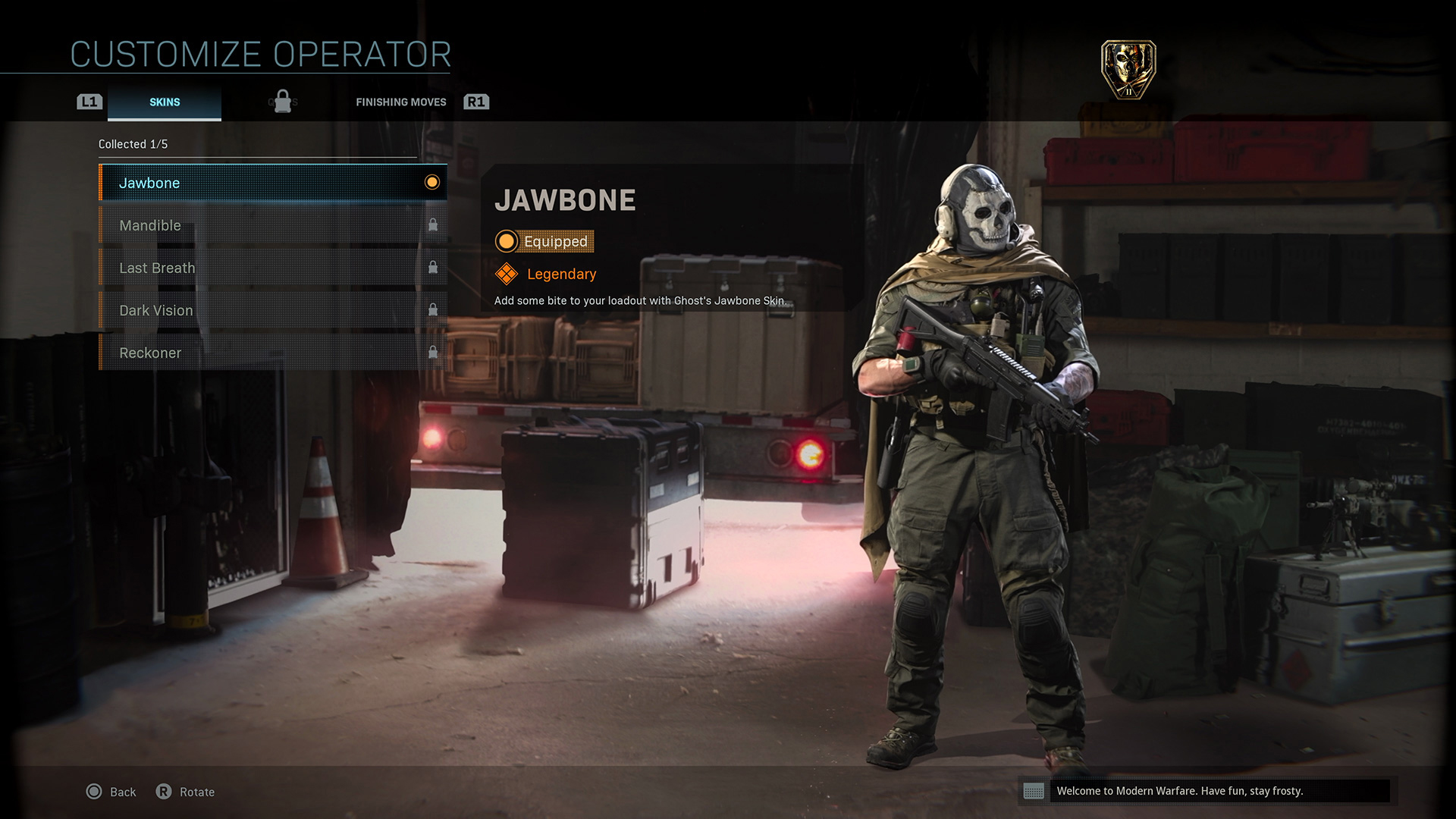 Skins: An Outfit for Every Occasion

Once purchased or unlocked, you have a variety of cosmetic skins you can collect and choose from for every Operator. This allows you to pick an outfit for any occasion; mainly taking down enemies across Verdansk, though certain skins (Otter’s “Woodland” outfit, for example) may prove useful for hiding in rural locations. Select Skins and pick the one you’d like to wear. You can pre-select a skin for every unlocked Operator at any time between matches. 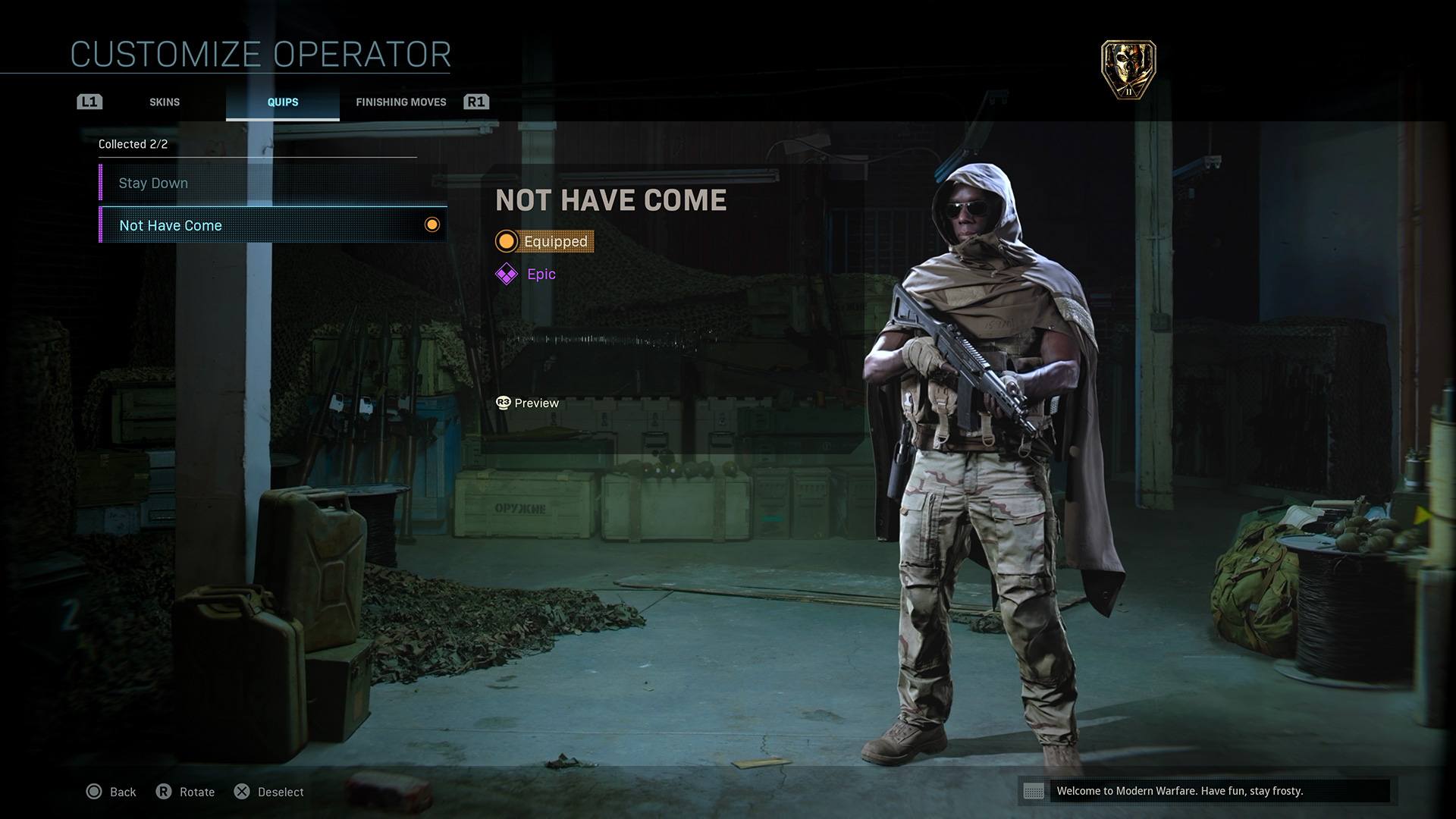 Your Operator also has a witty retort they can utter during the course of battle; usually after a kill. Make sure the last utterance your victim hears is a put-down of your choosing! 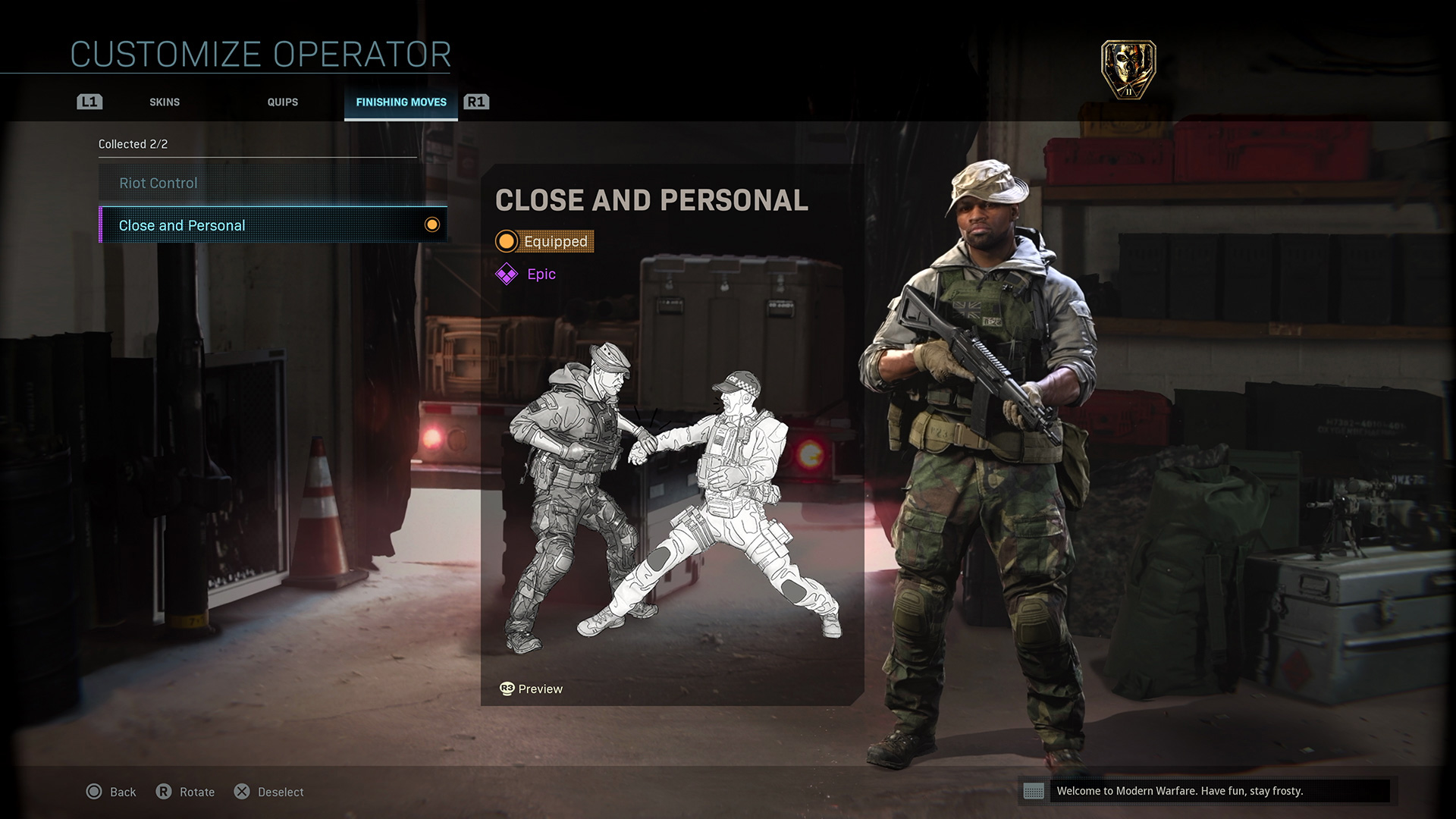 Finishing Moves: Dispatching with a Flourish

Although weapons are the stars of Warzone, few can rival the flourish of Finishing Moves when removing threats.

Each Finishing Move takes a few seconds, and is purely optional, but it is an incredibly satisfying method of disposing of troublesome rivals you may come across who aren’t being as situationally aware as perhaps they should be.

To equip a finishing move, before a Warzone match go to the Operators menu, select your preferred Operator, head into the Customize submenu, and tab over to Finishing Moves. There, you can choose any of the unlocked Finishing Move that the chosen Operator has.

Performing a Finishing Move is as simple as holding down the Melee button behind an enemy.

One of the hardest parts of performing these moves is setting yourself up to perform one. While enemies with bad situational awareness are prime targets for Finishing Moves, using certain Field Upgrades, such as Dead Silence, and tactical equipment, like the Heartbeat Sensor or Stun Grenade, can actively help you get behind opponents, know their locations, or slow their ability to know your presence and stop you.

Finishing Moves can also be interrupted; if you see a friend getting finished, take down the enemy performing it before it’s too late.