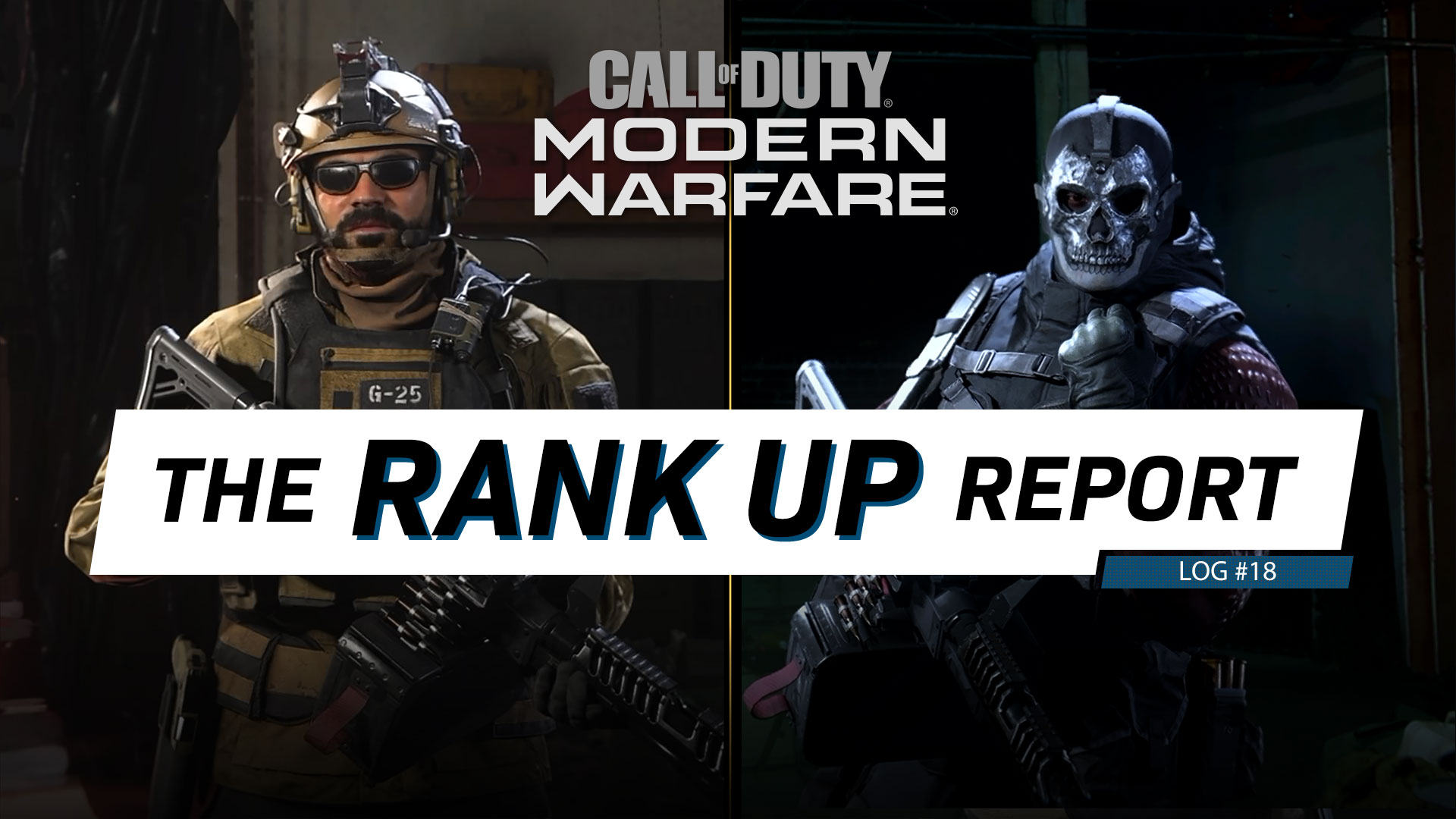 I hope you all took advantage of a Double XP weekend last week, because I’m ready to break down the Officer Challenges you may have unlocked since the start of Season Two.

But before we get into those – as well as the all-new Tomogunchi – we have to talk with our featured operators for this week. For the Allegiance, I had to go with Mace. I mean, c’mon; he’s badass and the newest Operator to Modern Warfare, so I had to show him off.

As for my Coalition Operator, I picked D-Day with his Deep Pockets skin from his Operator Mission within the Battle Pass system. While all that gold will definitely make him stick out like a shiny thumb, at least he has enough swagger for the whole squad.

Anyways, both these Operators are sporting the Tomogunchi whenever they go into battle, as it is by far the most awesome game within a game that I’ve seen in Call of Duty. 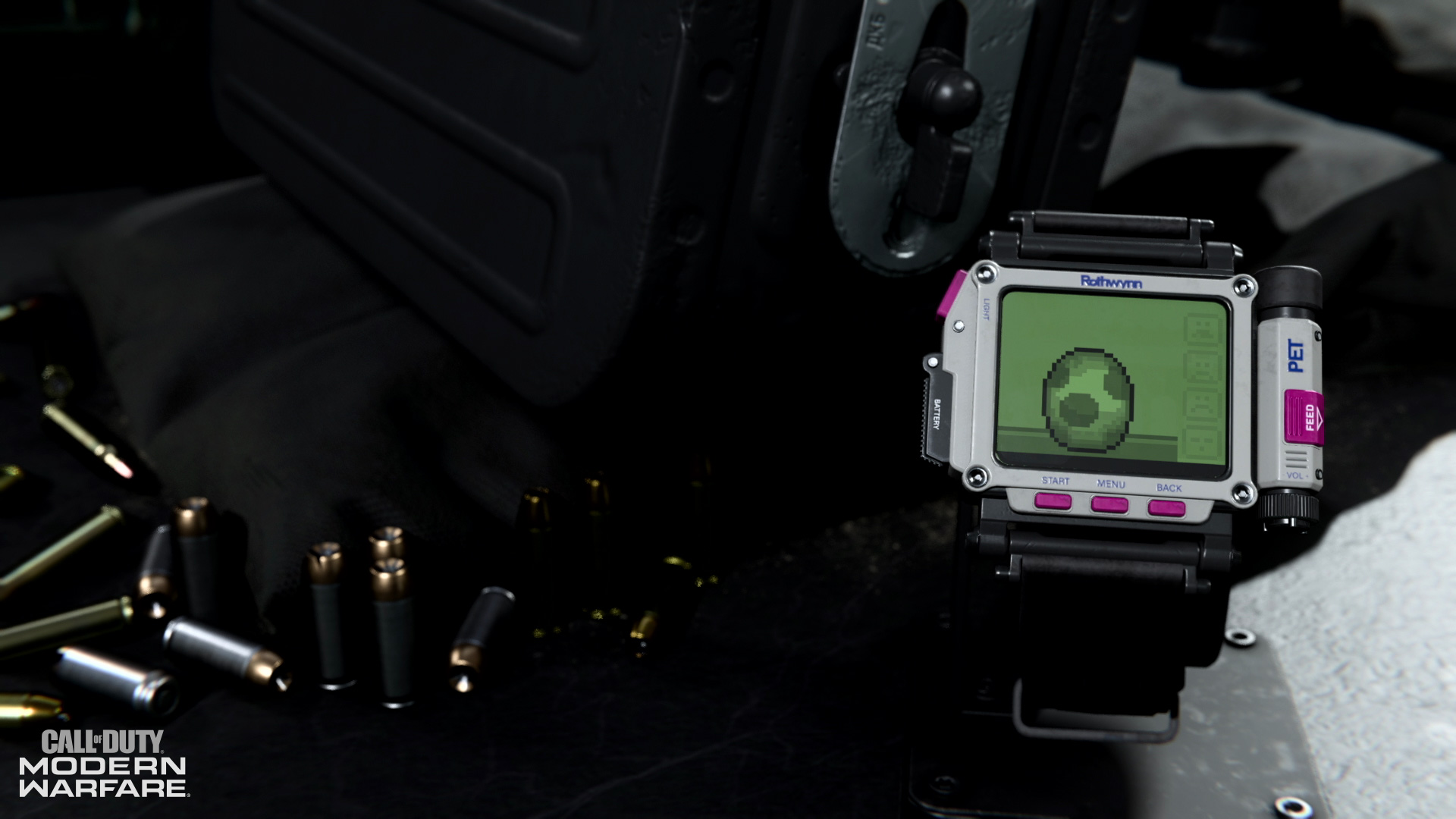 The premise of this little guy is simple: play the game, hatch a pet, then feed it by performing in game actions, such as killing enemies, completing objectives, or winning matches. You can read all about it in an article from the (fake) company who made the Tomogunchi, Rothwynn, here.

What that Rothwynn advertorial didn’t detail are a few secrets about the Tomogunchi. I’ve already seen the community work their way through their first lessons in virtual parenthood, but for those who need some help, here are four quick tips from an expert on parenting… a Tomogunchi pet:

1.      Don’t see your Tomogunchi hatching? It will take a few hours for it to hatch and come out of its shell, and a good amount of time for it to fully evolve. Patience is a virtue.

2.      Your Pet can die if its needs are unmet. You can see if your pet is feelin’ sad just by looking at the watch. The exact reasons for its sadness – which are shown on the right of your screen – can be remedied by the following:

e.      There are other bonus charges that can be earned to evolve your pet faster, and the bar that shows this is at the bottom of the watch’s screen… But I’ll leave you to figure out what those are.

3.      Tomogunchi teens are unpredictable; from a Child, any Tomogunchi pet can evolve into one of two teens, which have their own Adult forms depending on how you take care of them. Two of them are a real treat for veterans of the Call of Duty franchise…

4.      And that’s not the only surprises in store; there are also some secret evolutions of pets, and you’ll have to do some tall tasks to unlock them. You’ll know when you get it because, when you do the interact gesture, you’ll hear a special sound. That’s when you’ll know you have unlocked a hidden evolution!

Anyways, outside of taking care of my Tomogunchi, I tried to complete a bunch of Season Two Officer Challenge ribbons in between writing articles. What you’re seeing below is my progress as of when the last Rank Up Report went up last Friday (and if you didn’t see that one, click here). 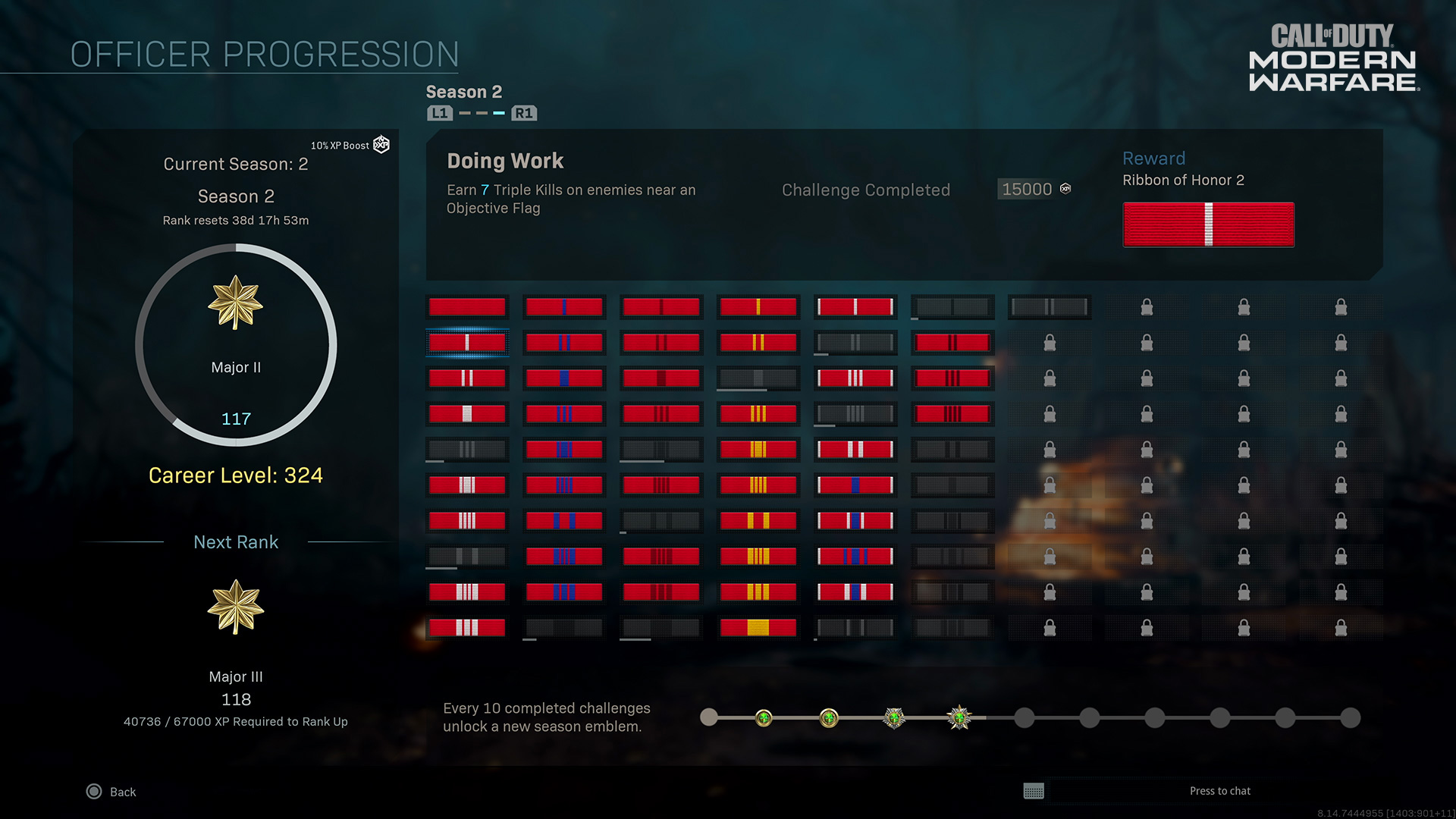 The image above showcases one of the hardest ribbons out of the first 50. While some of them will just take awhile – e.g. getting 400 kills with Submachine Guns or running over 50 enemies with vehicles – the ones I’m going to highlight are those that require, in my opinion, the most planning and skill to earn.

So, with that said, here are my tips for “Doing Work” on the hardest Officer Challenges out of the first 50 ribbons:

This challenge requires you to first pick an objective game mode with a flag. Although I love me some CTF, Domination is probably your best bet for this – the next officer challenge is to win 10 Domination matches, so you’re killing two birds with one stone – or Ground War.

If you are playing Domination, either go for a flag flip – taking the enemy team’s home base flag – or take a trip to a hotly contested B flag to begin your quest for a triple kill. In either game mode, be sure to have a weapon with extended mags, as you may need a full clip to fight a trio or more near an objective.

Also remember that you don’t have to be on the flag for this to count, meaning you could kill enemies that are near the flag from a distance… Or use a Killstreak to wipe them out without even seeing the objective.

Ground War is your friend; Infantry Assault Vehicles can be found loose on multiple maps, which means you don’t have to necessarily earn them to use them.

The other big tip I have while completing this challenge is to activate the Factory Approved Mission in the Barracks tab. Its first, fourth, and sixth objectives can all be done while using the IAV, whether it’s using the turrets, running enemies over with it, or destroying vehicles. 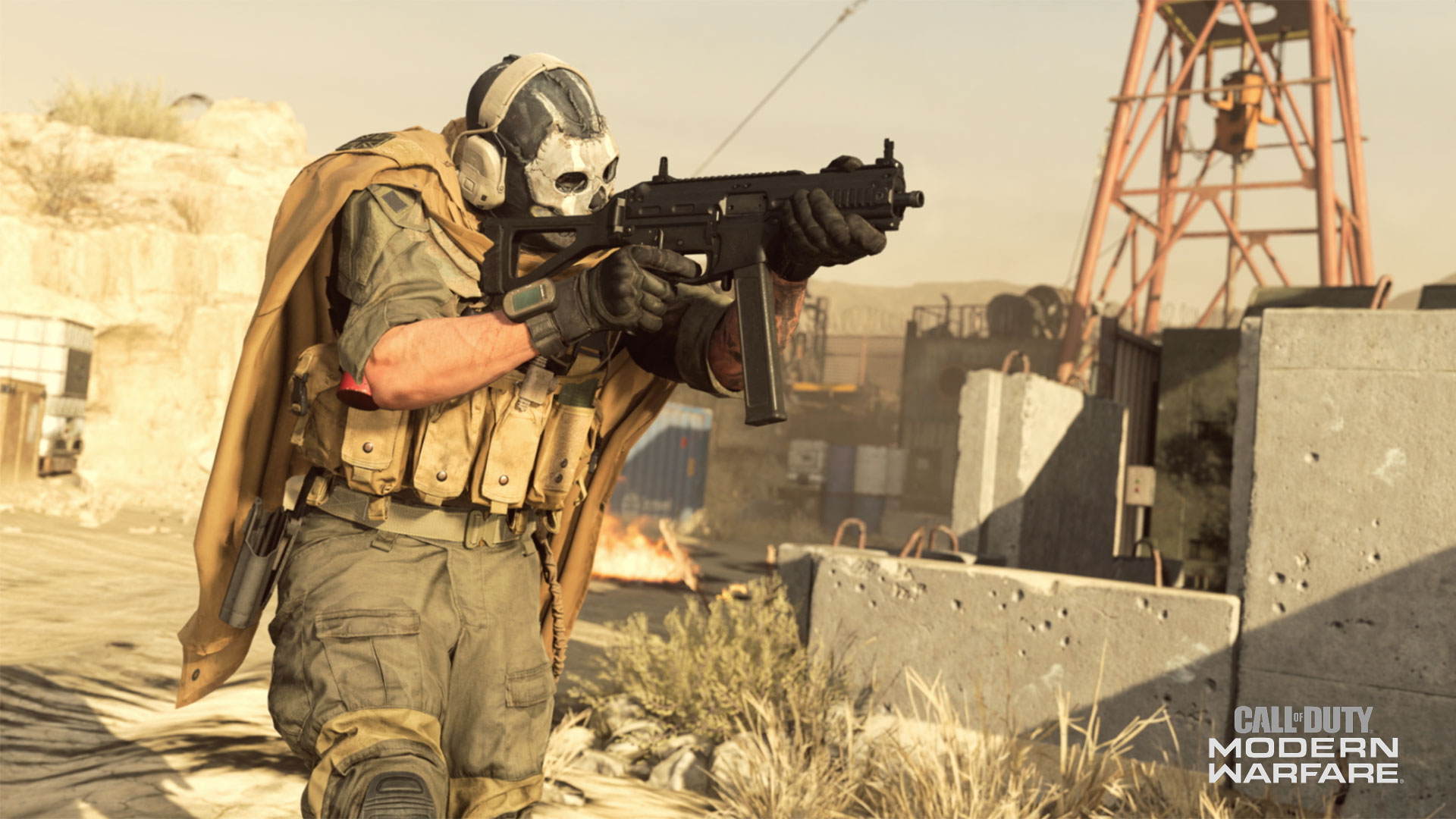 Just be aggressive; close-quarters fights tend to get you banged up more than long distance encounters.

Consider using the Striker-45 and knocking this challenge out in tandem with the SMG Kills one (get 400 kills with SMGs).

Note that you don’t have to kill the same enemy with their own weapon to complete this challenge.

Take down an enemy, and if you like their weapon, pick it up and use it against the entire enemy team. It may take some time to get used to picking up someone’s dropped weapon, but once you do, this challenge is fairly simple.

You may run into this challenge while also completing the Doing Work one, and the tips I have for this are similar.

Play Domination (or Ground War), aggressively play the objective, and use a weapon with a high ammo count. 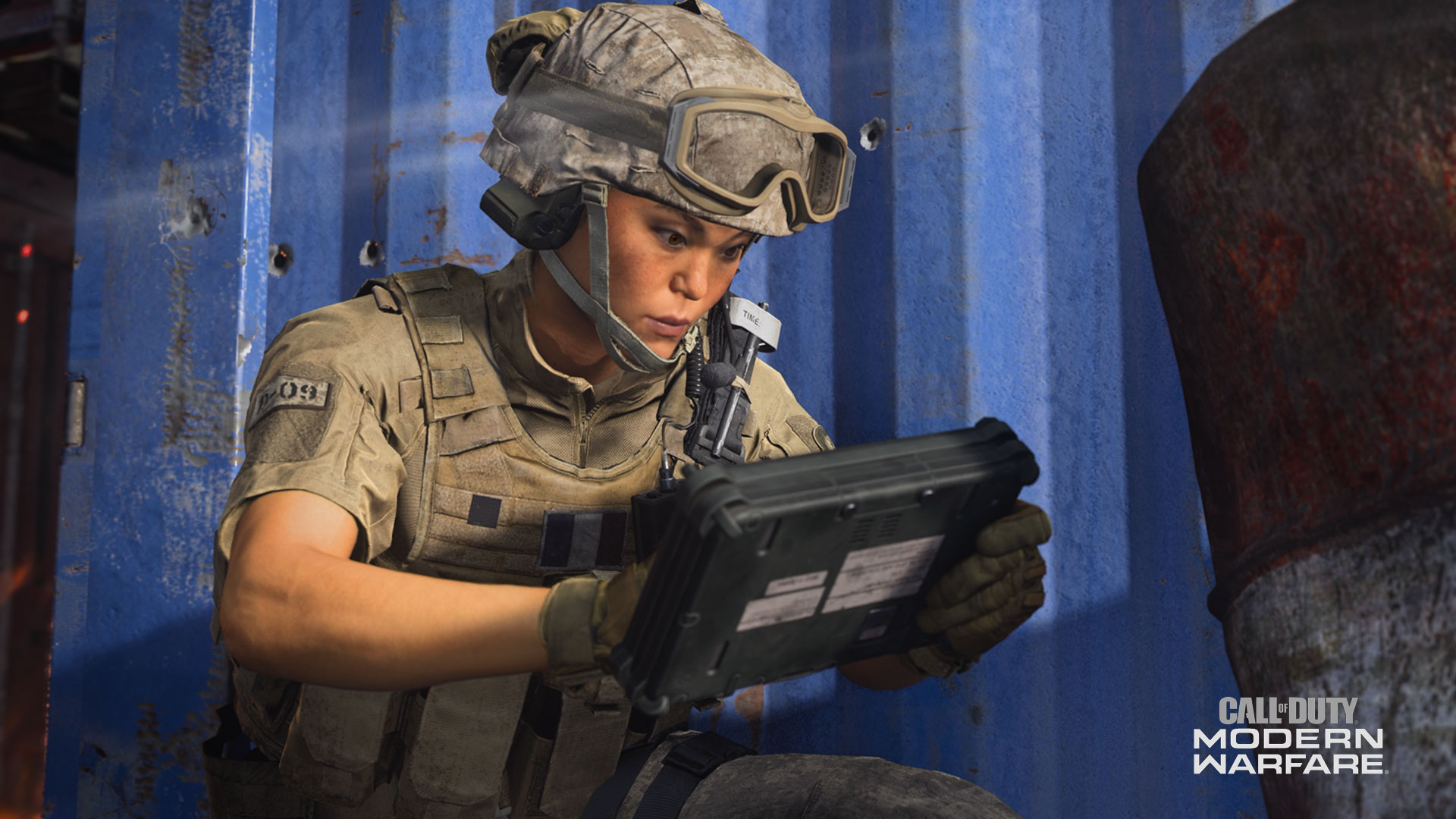 With Kill Chain moving to the Perk 1 Slot, try using a loadout with it and Hardline. Then, stack your Killstreaks by taking a low-cost aerial streak like a Cruise Missile, Precision Airstrike, or Cluster Strike and a higher-costing ground based scorestreak like, an IAV, Sentry Gun, or Wheelson.

Do that seven times, and you’re golden. However, if you’re having trouble, consider playing with friends who are willing to make callouts and run UAVs to give you some assistance via reconnaissance.

By going after the above challenge, you’re essentially completing this as well.

If you are having trouble earning five kills in one life, try using the Personal Radar or UAV to reveal enemy locations, which may help in tracking down that five Killstreak.

I’ll admit: there is some luck involved on top of plenty of skill to get this challenge done.

Quad Kills are when you earn four kills in a row and they are uninterrupted within the kill feed on the bottom left corner of the screen. That means no other player can get a kill as you absolutely wreck the competition.

Although this challenge isn’t too difficult, I have a neat trick for finishing this quickly:

Play regular Gunfight or in a Gunfight Tournament.

Why? You have a 50/50 shot of killing the first-place player on the enemy team each round, since a Gunfight team only has two people on it!

Finally, don’t worry about completing these challenges right when you get them; there are plenty of days before Season Two ends. With that time comes tons of opportunities to complete these challenges, rank up, and, most importantly, have fun.