One of the biggest challenges in Zombies puts you against 30 different objectives - and the clock - all for pride and bragging rights. Find out more below:

Gauntlets is a 30-round challenge mode that puts survival skills and map knowledge to the ultimate test either offline or online as a solo, split-screen, or co-op game mode.

Unlike a Classic game, each round of a Gauntlet has a specific challenge to complete, such as to only use a specific weapon or defend an area of the map. Missing an objective or getting fully downed by the zombie horde counts as a strike, and like baseball, three strikes and you’re out.

Though it isn’t necessary, it can benefit your game if you reasonable knowledge of the maps on Classic mode (or can team up with a buddy) before diving into a Gauntlet. Trial and error can get you far, and some objectives even have waypoints and other indicators to help you get through specific rounds.

To get a better idea of what Gauntlets are all about, here’s a quick overview of the first five challenge rounds from the first three Gauntlets: 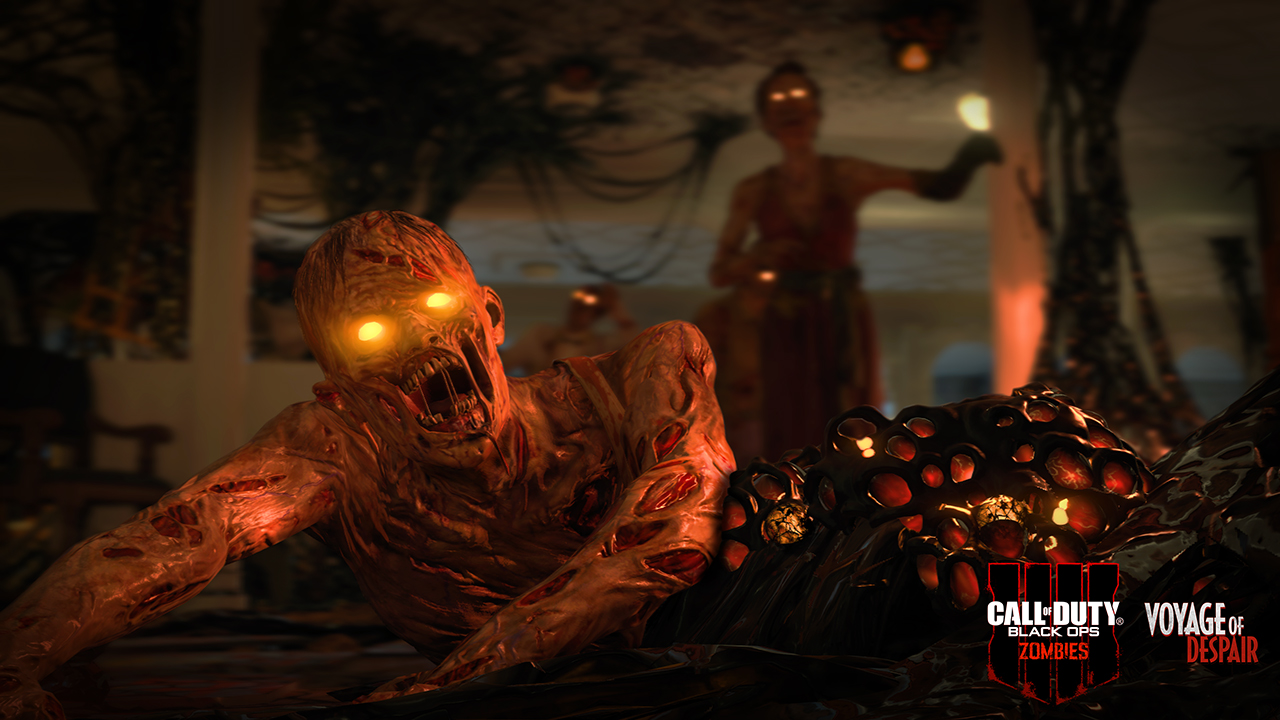 Named after the claim given to the ill-fated R.M.S. Titanic, Unsinkable is set on the “Voyage of Despair” and is the original Gauntlet for Black Ops 4.

The first five rounds of this Gauntlet are a prelude to the sheer insanity to come:

Round 1: Unsinkable – Survive the round without taking damage. Tip: Be aware of your surroundings and use your starting weapon to keep the zombies back.

Round 2: Well Equipped – Kill Zombies with equipment only. Tip: The Equip Mint elixir (a Classic elixir equippable in Create a Class), is excellent for this round, as it refreshes the cooldown on all equipment.

Round 3: Shall We Dance? – Use melee only. Tip: Bob and weave! Try not to get stuck in the middle of a horde and take zombies out one by one.

Round 4: Perk Up – Survive the round with at least one perk active. Tip: There is a perk machine right on the Forecastle, and by this round, you should have plenty of points to spare on it.

Round 5: Never Say Lever – Use the Essex Model 07 Lever Action Rifle Only. Tip: This can either be equipped as a starting weapon through Create A Class or can be found on the Forecastle. Aim for the head and keep this weapon on you for future rounds.

Past round five, you’ll need to know how to activate the Sentinel Artifact and know how to defeat special zombies, such as the Stoker and Catalysts; two of the many possible challenges that takes place over the subsequent 25 rounds. 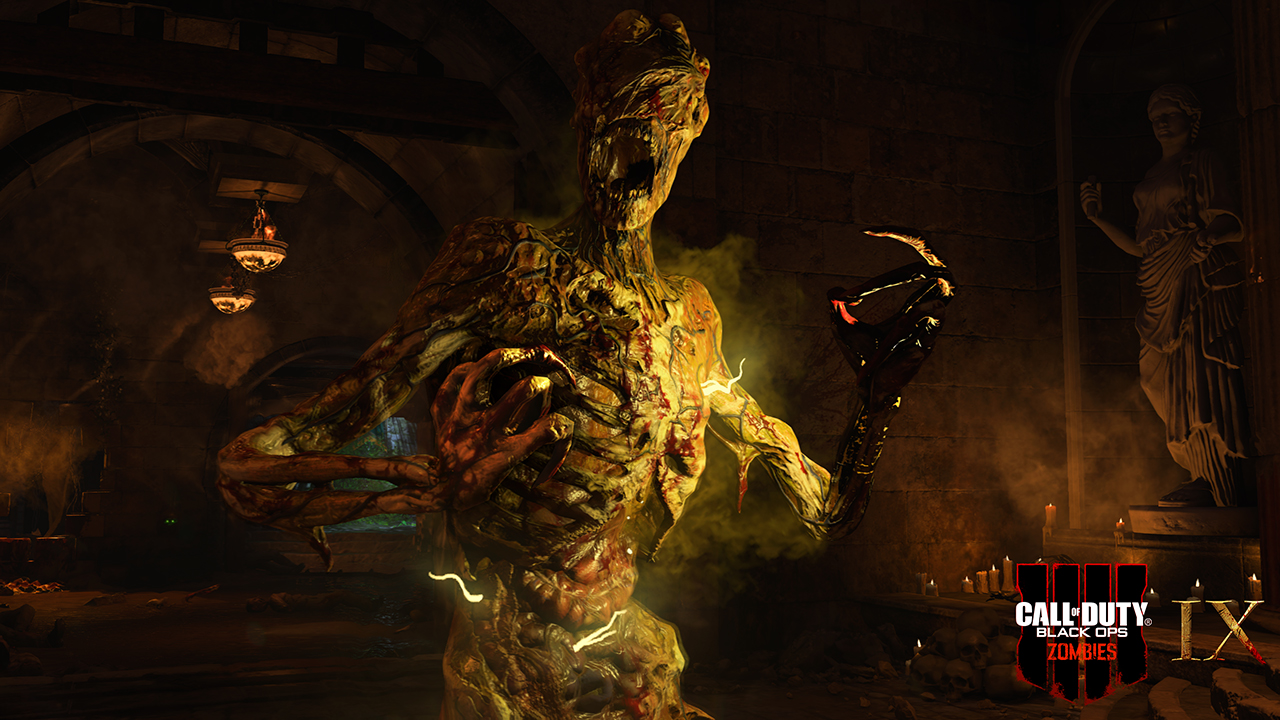 Veni, Vidi, Zombie is essentially “The Trials of Hercules, Black Ops Zombies Edition”! You’ll be on IX for this Gauntlet, which features some pretty interesting challenges right out of the gate:

Round 1: What’s The Point –  Taking any damage drains all of your points. Tip: Keep a safe distance and use equipment to avoid getting anywhere near a zombie attack.

Round 2: Speed Demons – Survive an onslaught of sprinters. Tip: These zombies move at startling speeds: Fire at will with whatever you’ve got!

Round 3: Straight Shooter – Missed shots hurt. Tip: Consider doing the opposite of the last round, and conserve ammo while aiming for the head or chest for quick and easy kills.

Round 4: Ride Shotgun – Use the MOG 12 shotgun only. Tip: The MOG 12 can be equipped as a starting weapon in Create a Class, and can also be found in the Mystery Box, or the Danu Altar Room.

Round 5: Shielded – Possess the shield at the end of the round. Tip: There are no spoilers here; try playing an online game or two and ask the community for help on assembling the shield!

With one-sixth of the Gauntlet down, the challenges only get harder. Get used to that MOG 12 and Shield, learn the locations of the deadliest weapons on IX, and, most importantly, be ready to board up plenty of windows if you want to proudly exclaim that you came, saw, and conquered Veni, Vidi, Zombie.

The third Gauntlet is on Classified, a re-imagining of the classic Black Ops Zombies experience “Five” that’s available for standalone purchase or included in the Black Ops Pass. This gauntlet has plenty of unique and intriguing challenges to complete, as seen even in the first five rounds:

Round 1: Share the Health – Kill enemies to regenerate depleting health. Tip: Be quick on this round and take out zombies as soon as possible. Don’t worry; your health will come back after the round is over.

Round 2: Slippery – Players can only attack or use elixirs while sliding. Tip: If you can get the perk PhD Slider by this round (either by Talisman, Elixir, or using smart strategies in Round 1), this challenge becomes a breeze. Otherwise, consider coming into this challenge with a weapon that has a good hip-fire spread.

Round 3: Flag Protocol – Players can only attack or use elixirs when standing next to a flagpole. Tip: Most of the flagpoles are in the map’s starting area. It’s okay to move from flagpole to flagpole to avoid enemies, but just know you can’t fire your weapon unless you’re touching the flagpole.

Round 4: Busting With Excitement – Players can only use the RK 7 Garrison Pistol. Tip: This pistol can be a starting weapon (and is good enough to help you pass through the Slippery challenge), or can be purchased for 700 points in Central Filing.

Round 5: Tower Defense– Moving Causes Damage. Tip: Stone Cold Stronghold, a perk that creates a defensive circle around you while standing still, can make this round considerably less difficult. Otherwise, use equipment and your Special Weapon to help fend off the charging hordes.

From here, keep that RK 7 Garrison handy (and Pack-a-Punch it!), learn how to stay cool when you have to beat the clock, and be prepared to take on some other wacky challenges to avoid going to DEFCON 1 on Death-Con FIVE.

Completing a Gauntlet is no easy task, but there are plenty of rewards for clearing 10, 20 and 30 rounds, as well as completing a full Gauntlet with no strikes. These personalization rewards are like badges of honor that can be shown off on your in-game profile for beating these difficult trials.

Think you’re a true Zombies master? Then run the Gauntlets and prove it!