When Ghost makes an astonishing discovery in Verdansk, he’ll need all the backup he can get. Will you answer the call?

Prepare for a dangerous new threat, as Season Three comes to Call of Duty: Modern Warfare including Call of Duty: Warzone. With the very latest maps, modes, Operators, weapons, and gear, there’s no shortage of new content to explore, unlock, and play.

On day one, Modern Warfare and Warzone players can access the very latest content for Season Three. But to get the most out of this high-octane Season, all players should pick up the reloaded Battle Pass.

If you’re brand new to Modern Warfare including Warzone, don’t hesitate: the seasonal Battle Pass is an incredibly rewarding, gameplay-based system. With 100+ items available to unlock just by playing the game, the Battle Pass is packed from end to end with the very latest and greatest Operators, weapons, and gear.

But, Battle Pass rewards refresh every Season. So, there’s a limited amount of time to pick up these items, which are rarely found anywhere else!

How Does It Work?

The Battle Pass offers 100 tier-based, in-game rewards that unlock with gameplay. Simply play Multiplayer, Special Ops, and Warzone, and earn progression in the Battle Pass. Plus, you can collect XP – through kills and assists, completing objectives, deploying Killstreaks, and other in-match actions. Any earned XP will count towards your Battle Pass progression. 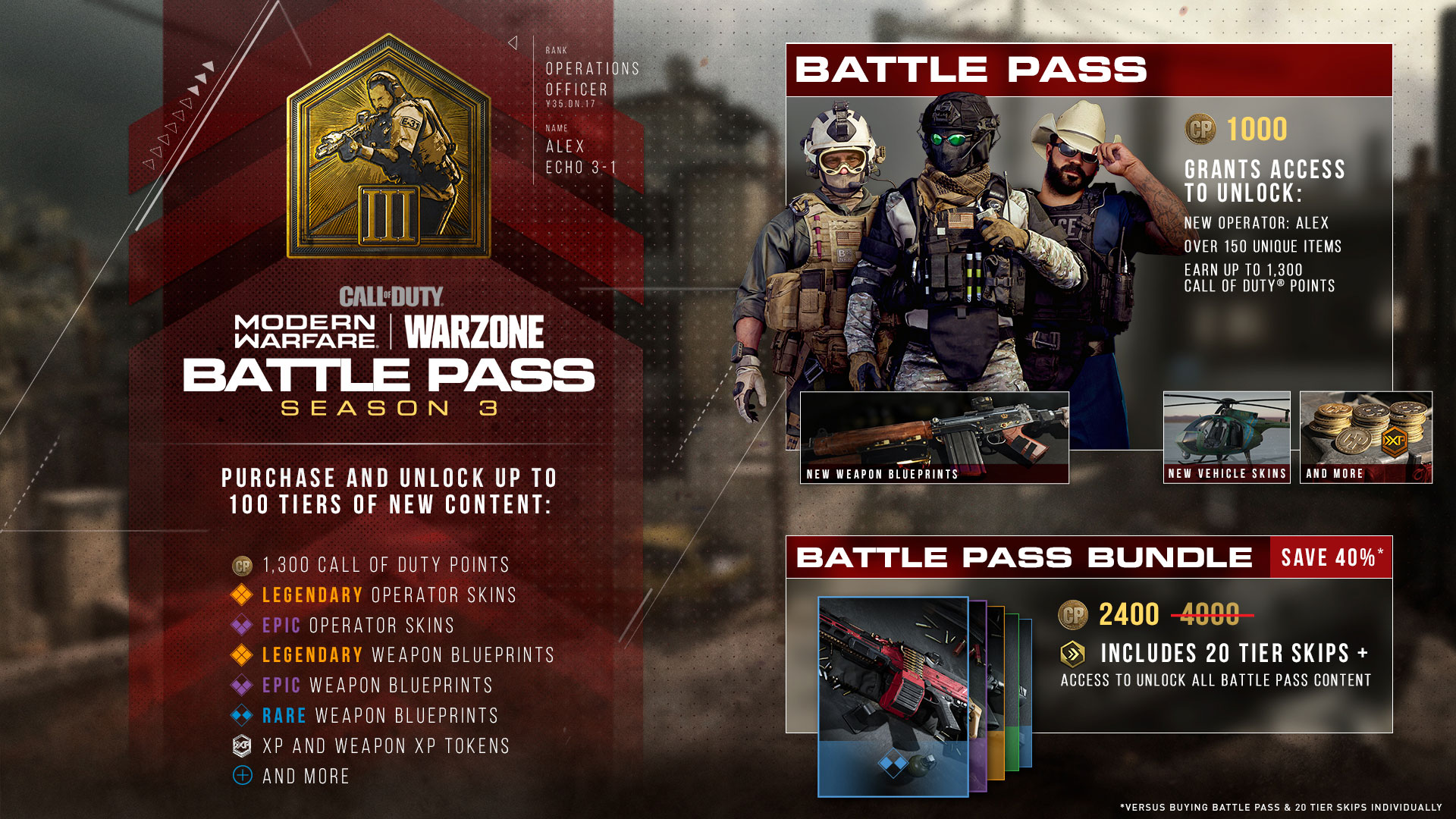 The Battle Pass system is available to all players. It features FREE tiers, like the ‘SKS’ marksman rifle and the ‘Renetti’ handgun, which all players can earn. But, only those who purchase the Battle Pass or Battle Pass Bundle (includes 20 tier skips) can access all 100 unlockable tiers.

Those who do not own the Battle Pass will still unlock some content at FREE tiers, just by playing. And, there’s plenty of free rewards to go around. All players can unlock epic items like Call of Duty Points, XP Tokens, and two new, FREE weapons, just by joining a few matches.

Read on to see what’s available in the Season Three Battle Pass. And, find out how to unlock each reward for yourself.

As soon as you purchase the Battle Pass, you’ll automatically unlock an incredible set of rewards. See below: 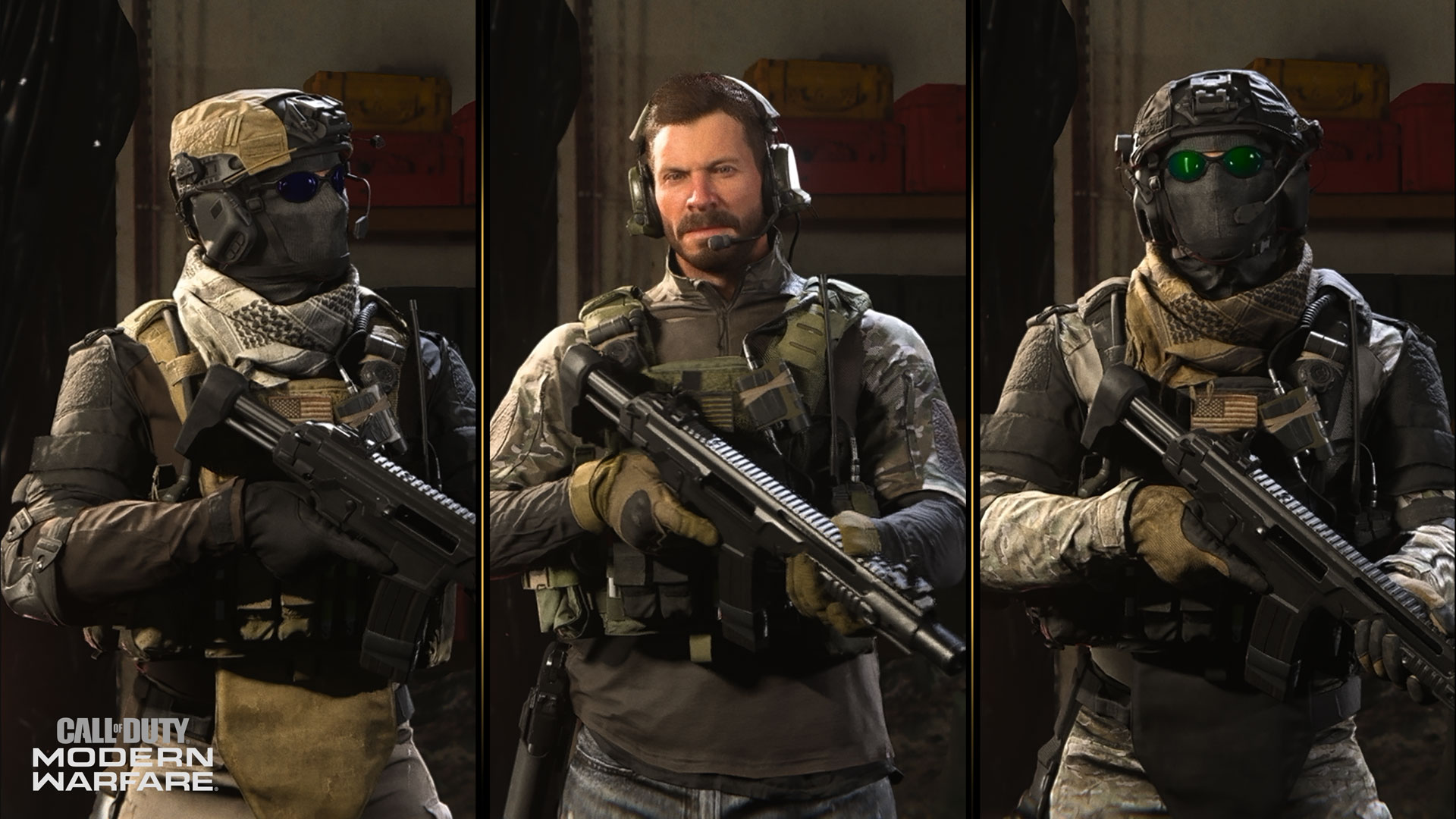 A central protagonist from the Modern Warfare Campaign, Alex now returns after the blast at Barkov’s facility. Bearing battle wounds, but ready to hit the field, Alex is decked head-to-toe in a tactical getup, complete with gloves and goggles.

Unlock ‘Hard Wired’ Alex to play as him in Multiplayer, Special Ops, and Warzone.

And, to see the dramatic and gripping events leading Alex to this point, you’ll need to play the Campaign. Discover the story behind this war-torn Warcom fighter – if you dare.

Celebrate the right to bare arms with this inked-up Allegiance fighter. Instantly unlock ‘Hard Labor’ Yegor with your Battle Pass purchase and treat your foes to a gun show in Multiplayer, Special Ops, and Warzone.

And More, When You Buy

‘Hard Wired’ Alex and ‘Hard Labor’ Yegor also come with exclusive Operator missions, available only for those who unlock these Operators through the Battle Pass. Complete objectives with either of these Operators equipped to earn rewards for those Operators and XP to help you advance through this Season’s ranks. (And, a little extra – like player cards and XP Tokens.)

Read on to see even more rewards available in the Battle Pass. Below, we’ve highlighted just a few of our favorite tiers. 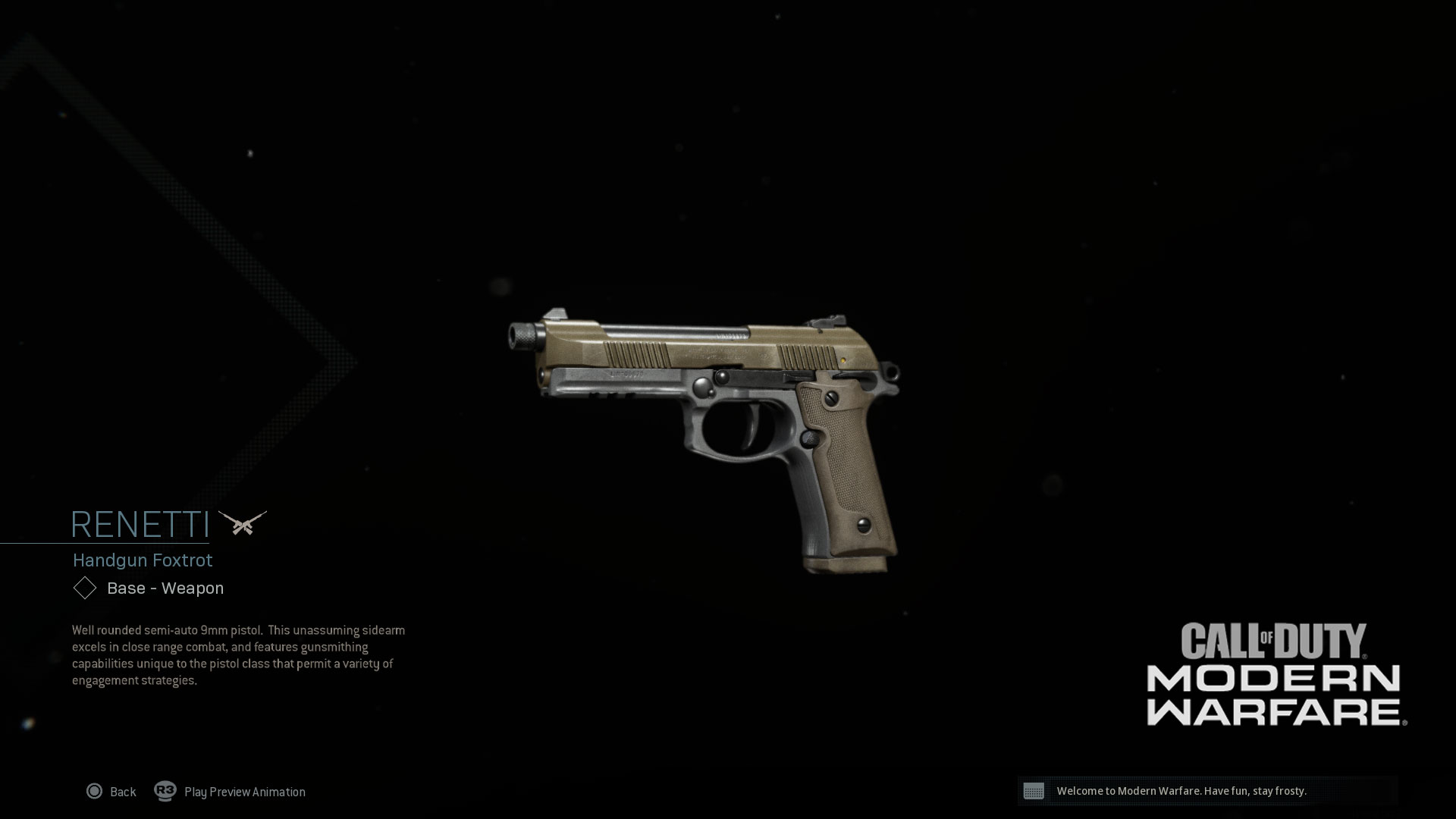 Anyone who unlocks Tier 15 with gameplay will get the Renetti handgun for free. This semi-auto handgun offers loads of attachment options, including three-round burst. Brandish the Renetti in close range combat, and you’ll send enemies scattering. 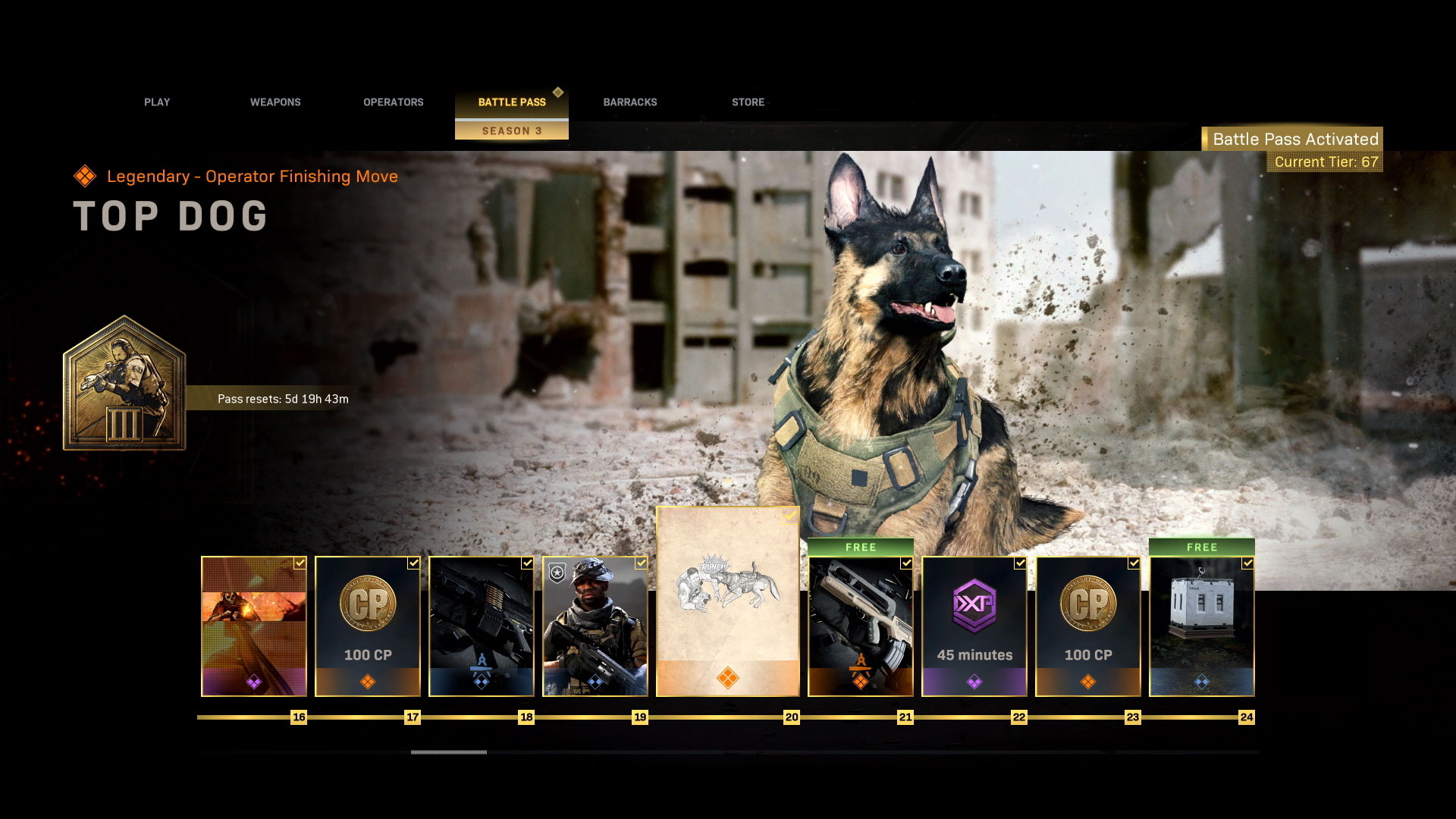 Tier 20: Riley the Dog’s Finishing Move ‘Top Dog’
Riley is back and all bite, in a Finishing Move available for ALL Operators! This very good boy – and playable fan-favorite – from Call of Duty: Ghosts is part vicious assassin, and pure German Shepherd. Unlock the ‘Top Dog’ Finishing Move and take down your foes with help from man’s best friend. 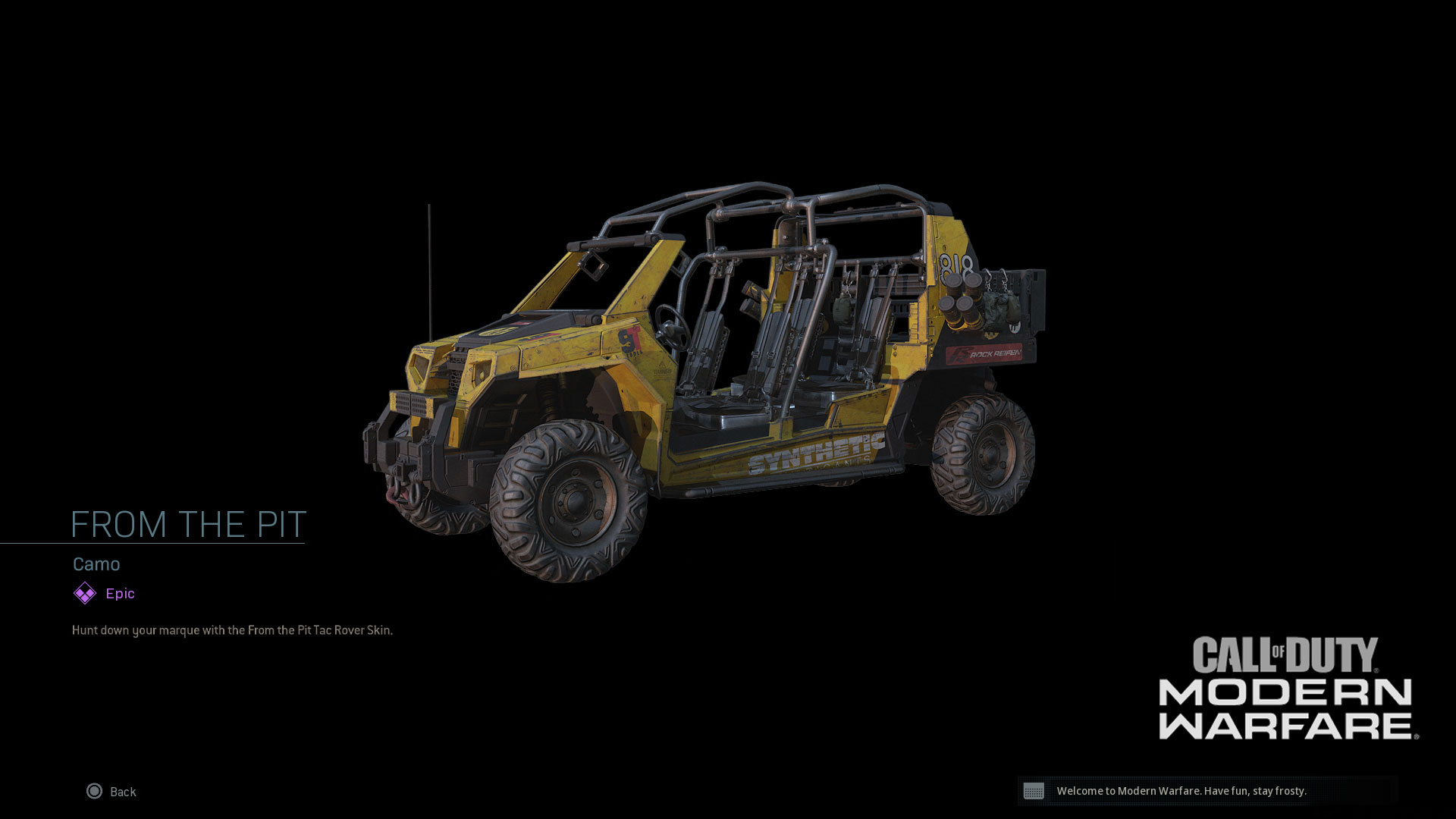 Unlockable at Tier 26, the Rover vehicle skin infuses any and all Warzone, Ground War, and Special Ops vehicles with Big GoKart Energy. With a dusty, dirty yellow exterior, ride out ‘From the Pit’ in style.

What Are Vehicle Skins?

The newest rewards available in the Battle Pass. Deck out any chopper, ATV, SUV, or flatbed truck with one of these skins, and it’s a rap for the competition – at least where style is concerned.

Select your favorite vehicle skin before the match. Then, hop into any vehicle, and the skin automatically appears. When you exit the vehicle, your skin stays affixed to the body until a new team takes it for a spin. Because of this, vehicle skins let your team know if a vehicle has been used, which can help you track down enemies nearby.

Look out for more vehicle skins in the Battle Pass, AND in bundles available at the Store. 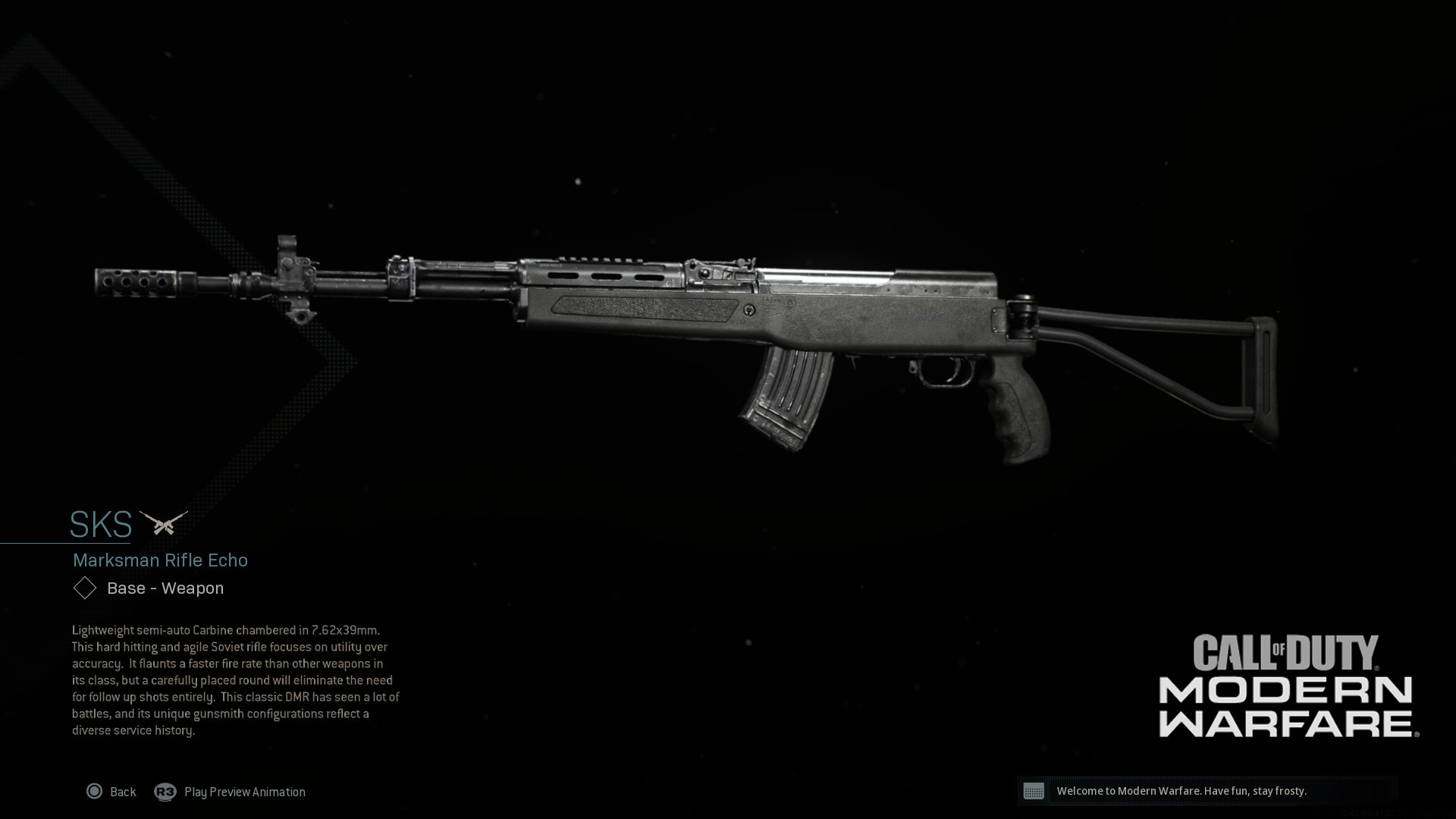 The latest in long-range advancements, the SKS marksman rifle is available for FREE at Tier 31. All players can access this versatile marksman with gameplay.

Hard-hitting, agile, and with a faster fire rate than others in its class , this weapon excels many engagements. The SKS packs in tons of gunsmithing options, too. Adjust attachments like the Barrel, Stock, Under Barrel and Rear Grip to make the SKS perform like a long-range assault rifle. Or, lean into the patient and hard-hitting nature of the marksman rifle class, with attachments like the Focus perk. 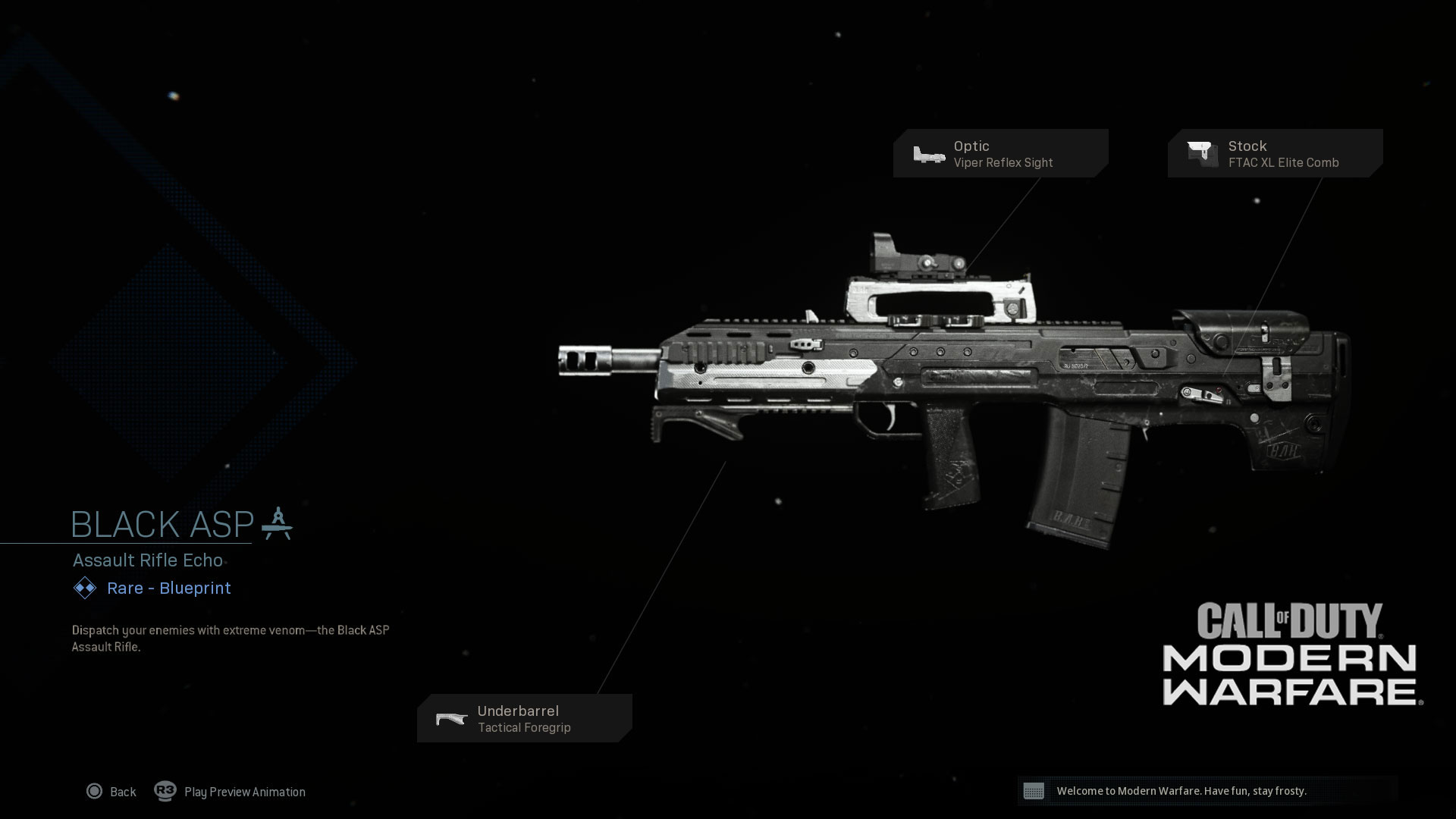 When it comes to blueprints, the Season Three Battle Pass pulls no punches. Unlock up to 19 new and exciting weapon blueprints, each pre-set with a range of attachments that lean into distinct playstyles and capabilities of the weapon.

The weapons listed below are just a small proportion of the heavy-hitting tools available between Tiers 1 and 100. Keep playing all through Season Three to unlock them all. 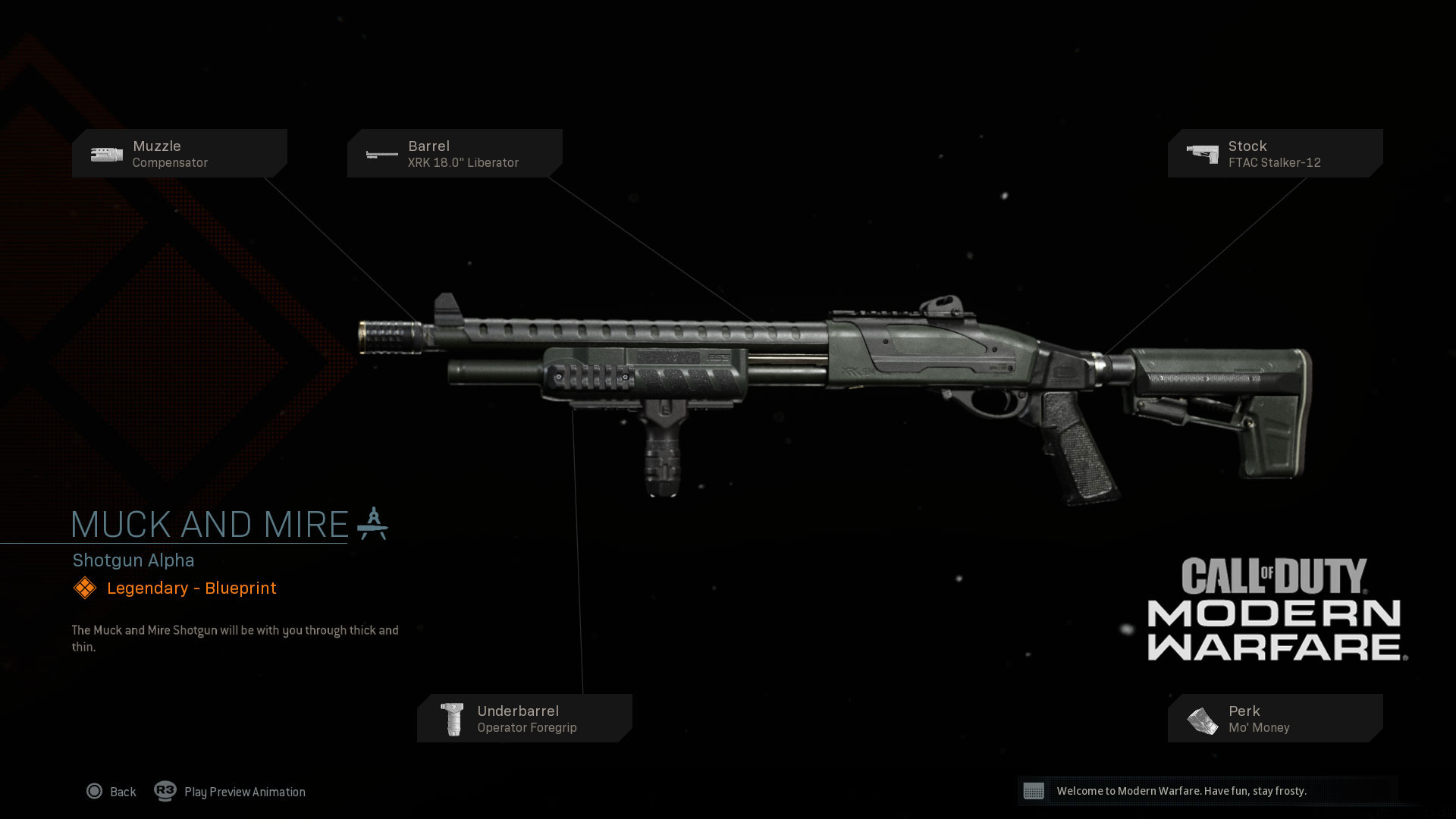 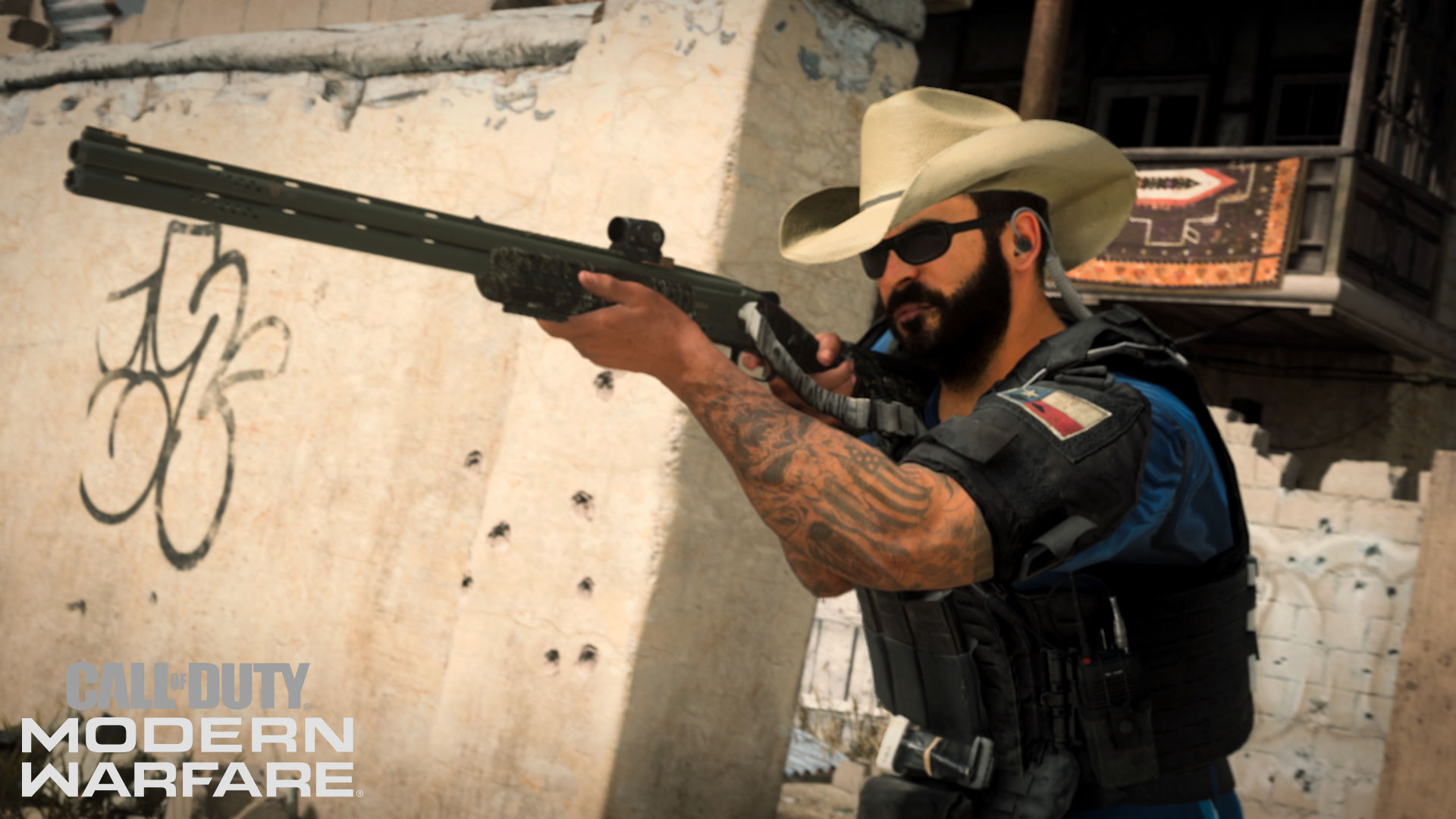 Acquire an Operator skin and that Operator will automatically unlock for play (if unowned), decked in whatever skin you picked up. There are over 36 Operator skins available in the Battle Pass, which means you can unlock a massive strike team – just by playing. 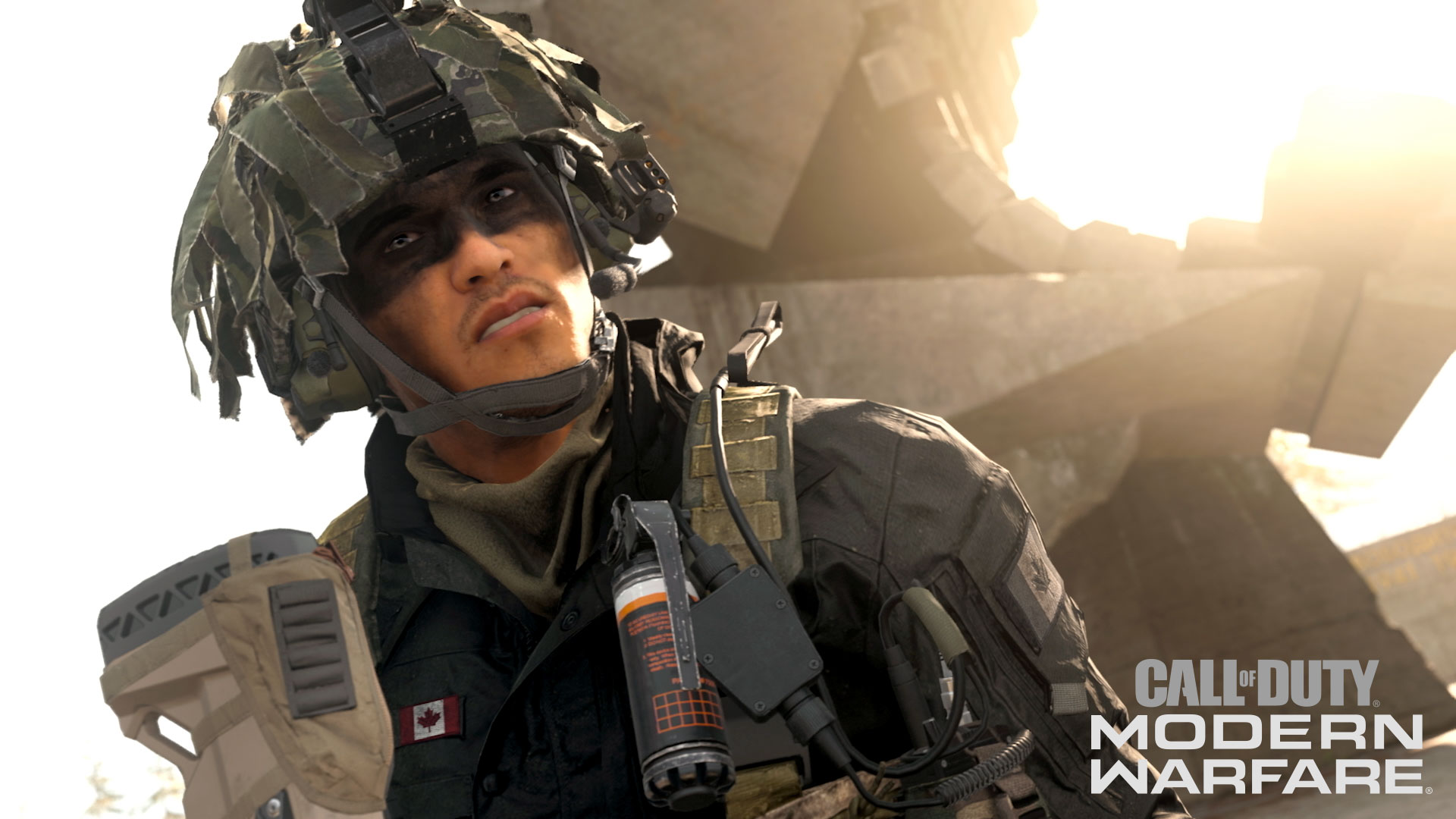 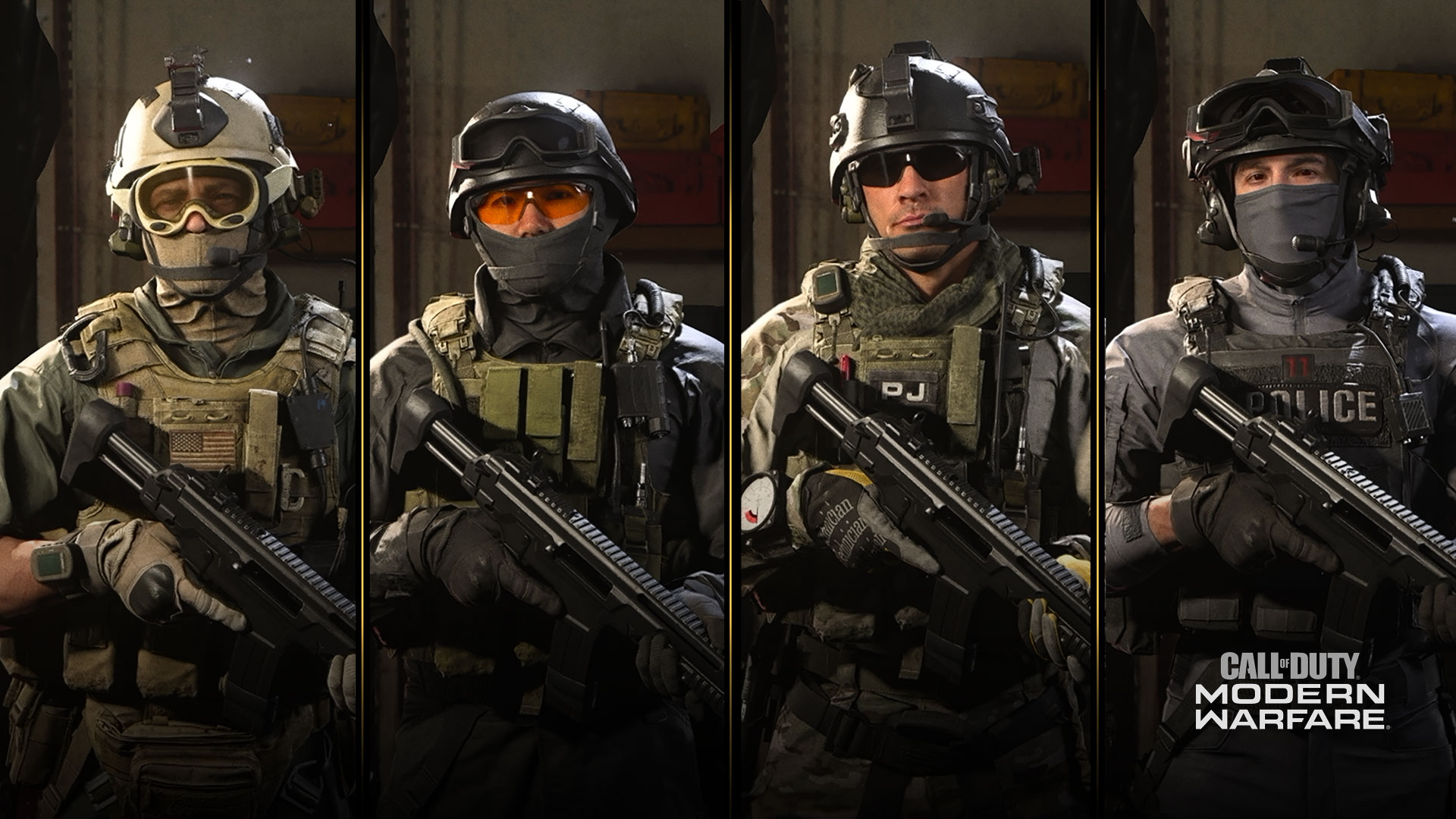 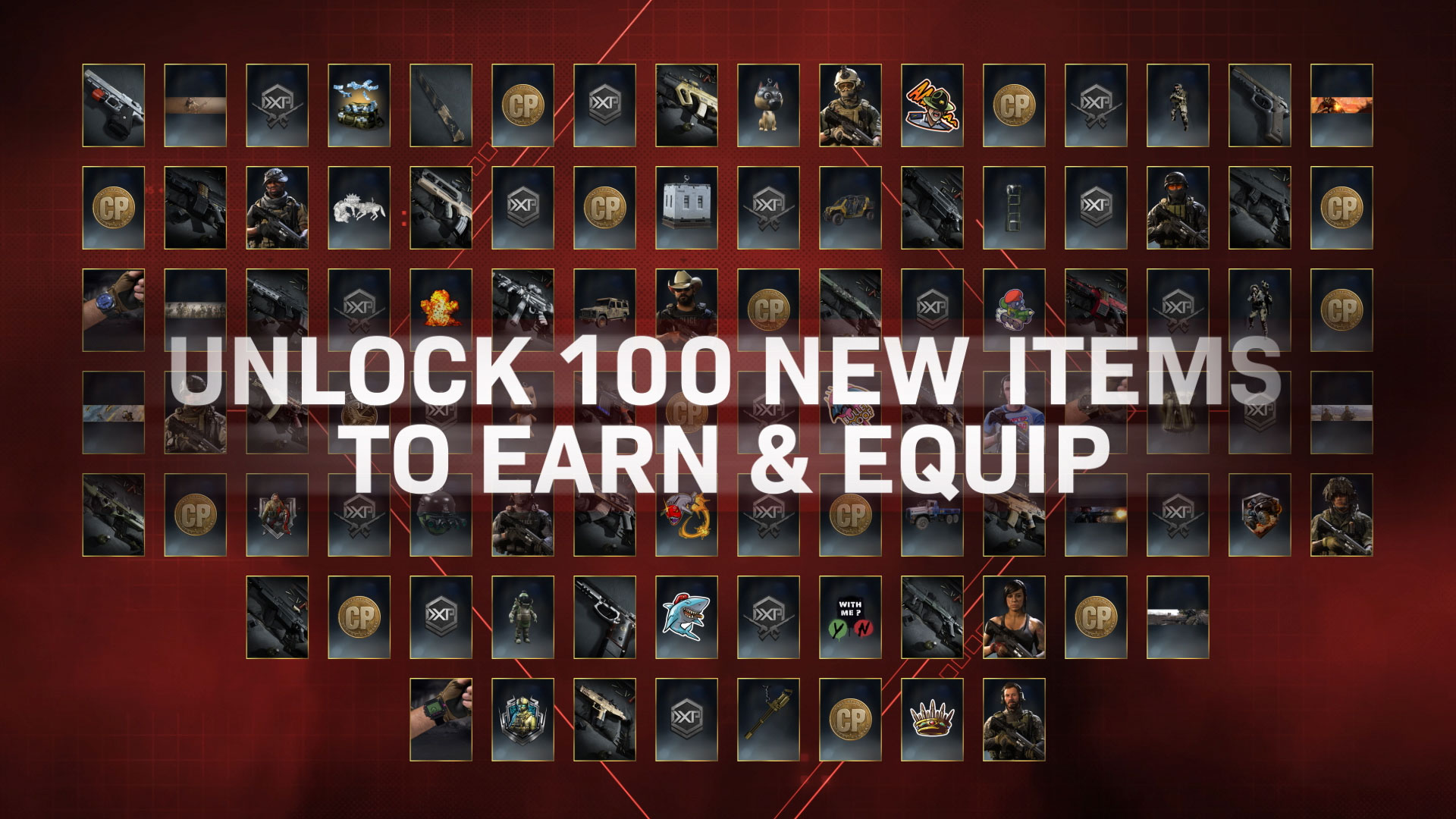 Tier One Operator, ‘Alex’ is the standout fighter for Season Three. Reach Tier 100, and you’ll get a brand-new pack of gear for this Warcom agent, plus an Operator mission to unlock even more rewards.

Miss the old Alex? In Tier 100, you’ll be able to unlock Alex in his original form, with his Operator skin from the Campaign. PLUS, you’ll get a tailor-made blueprint for the SKS marksman rifle, a vehicle skin, and even a Season Three Battle Pass emblem that says, “Yeah, I go all the way.”

Or, you can choose to pick up the Battle Pass Bundle which includes 20 tier skips for instant access to the Renetti handgun, ‘Riley’ Finishing Move, and the ‘Sandstorm’ shotgun blueprint.

Now, Go Get Some.

The Battle Pass is chock-full of sweet new items for Multiplayer, Special Ops, and Warzone. And with all players able to access the Battle Pass on day one, you can expect a high-octane race to gather the most gear across all modes.

But, the Battle Pass is only live while Season Three lasts – and, it won’t last forever. So, stick with the pack and unlock this gear you can earn for a limited time as you play and slay. Pick up the Battle Pass right now!

See you online? We promise to stay frosty, if you do.