Grind is here in Call of Duty: Black Ops 4, and it’s just as hella sick as you remember it. But before you drop in, get to know your surroundings.

Grind is back. Get stoked.

Originally a part of the Call of Duty®: Black Ops II downloadable content pack “Revolution”, Grind returns as a free Multiplayer map for all players in Call of Duty: Black Ops 4.

Longtime Call of Duty community members know how righteous this map is, but for those who don’t know or just need a reminder, let’s drop in and see how it’s been updated for Black Ops 4: 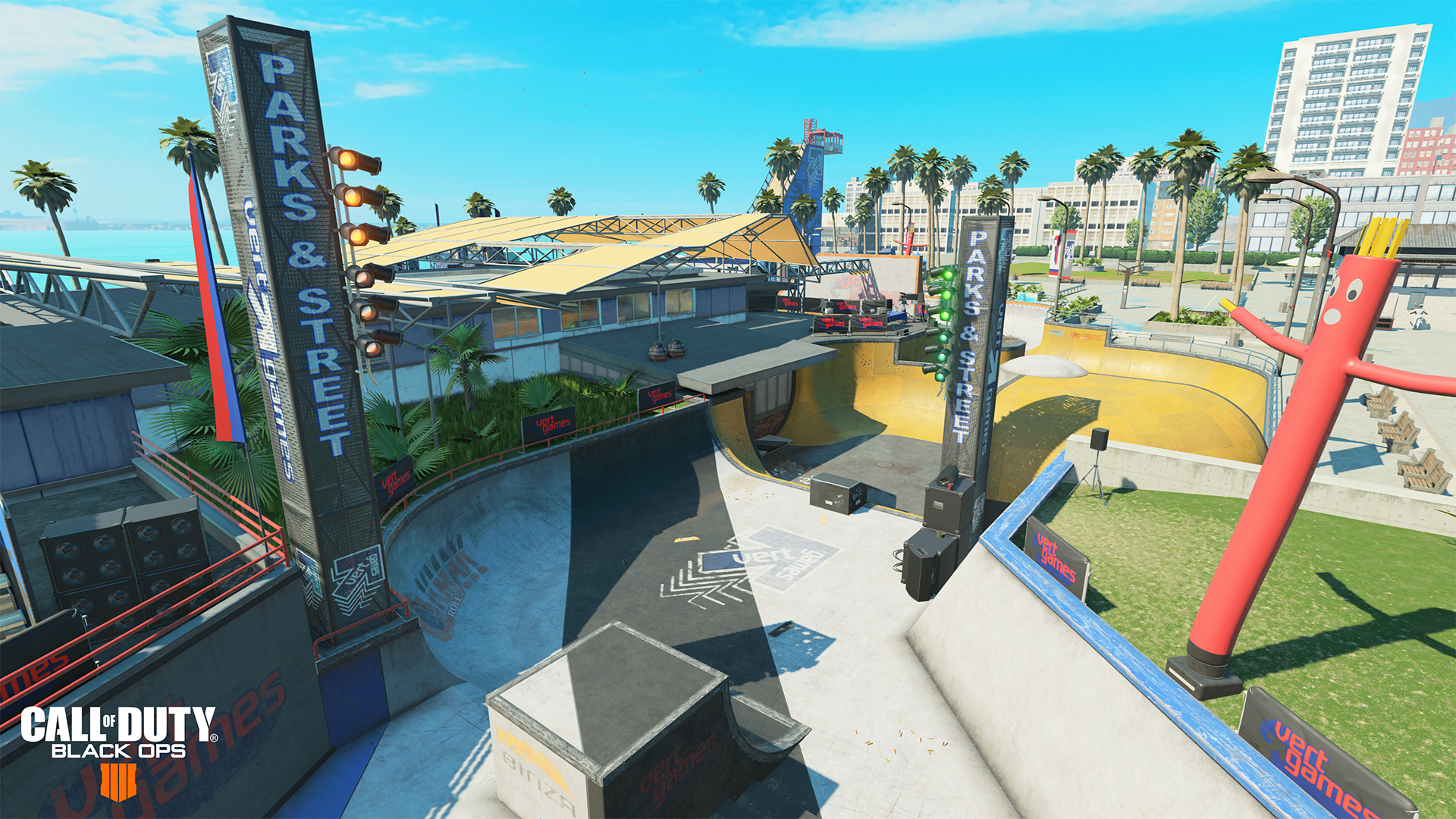 As you can guess by the name of the map, Grind is set in a skatepark out in Venice Beach, California. There are enough ramps on this map to get you in the mood to crank up some ska and break your elbow trying to ollie over a trashcan, but don’t grab your board just yet… there’s a war to win, and you’re gonna need those elbows.

In team game modes, one team will spawn in the parking lot in the north, and the other will be in a more concrete section of the skatepark near a gnarly loop.

Wherever you spawn in or run, the map is riddled with vertical ramps that offer some unique cover. Like an actual skatepark ramp, it’s pretty difficult to run up these ramps, but they can be effective to hide behind while advancing toward an objective or the opposition. 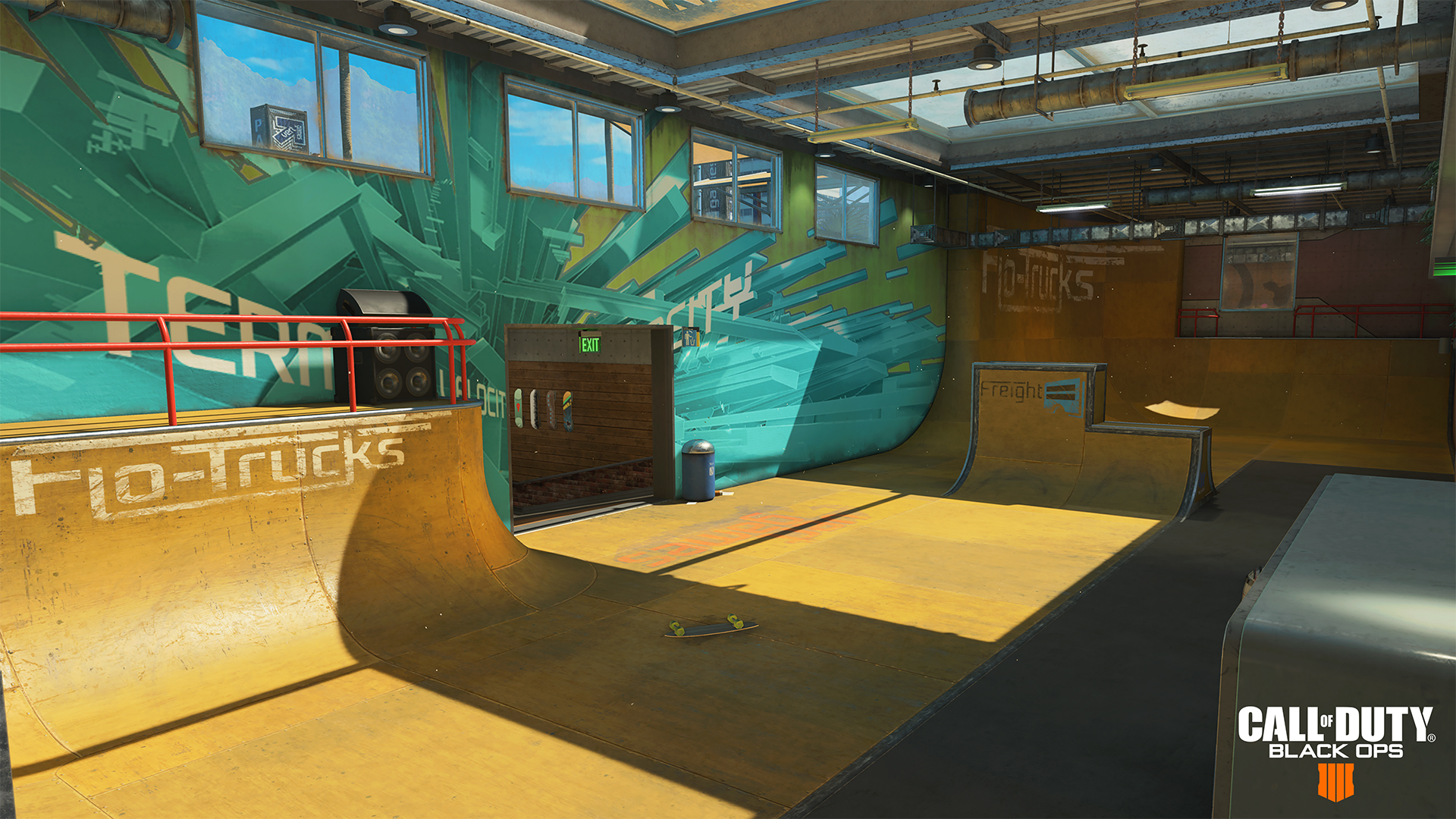 Ask any Grind veteran out there about this map, and they’ll tell you how deadly the inside portion of the map can be.

Due to exposure limited to the outdoors, aerial Scorestreaks can have a tough time dropping in here, which, in turn, leads to a back-and-forth between teams trying to lock down this indoor stadium.

Not only that, but hardened Call of Duty players know that the middle path has incredible sightlines into bottlenecks caused by the north and south entrances. Many a top play has been hit by a nasty sharpshooter here, so be advised that this middle path could be packed with enemies that could have anything from a close-quarters-build to a tricked-out Paladin HB50.

The other two paths can also have a wide variety of engagement opportunities. No matter what weapon you use – all weapon classes are on the table for this map – use your good judgment. As good of an idea it is to jump from pipe to pipe while using close range weaponry, so too is taking a sniper rifle into those long sightlines in all three lanes.

Both the initial spawn areas even have some wiggle room to work with for skirmishes. The parking lot spawn has a locker room and another path opposite of it, while the other area has a good amount of skatepark to work with.

For those returning to this map, the above may be a bit familiar, but in Black Ops 4, this map gets supercharged by Specialists. Here are a few Specialist synergies to get you started on your own radical play ideas:

•   Firebreak’s Reactor Core could be the answer to a crowded indoor stadium. Popping it in one of the flank routes could catch someone running straight through the central path.

•   Outrider’s Hawk can sit over the indoor stadium, acting as an aerial camera for the next skating championship… or a recon vehicle that can hover over all three paths easily.

•   With the number of ramps and cover pieces on this map, Recon’s Vision Pulse and Sensor Dart are great for marking enemies hiding around.

•   Ruin can carve up this map with his Grapple Gun, as he can shoot it at far away ramps and fly over lips and rails. 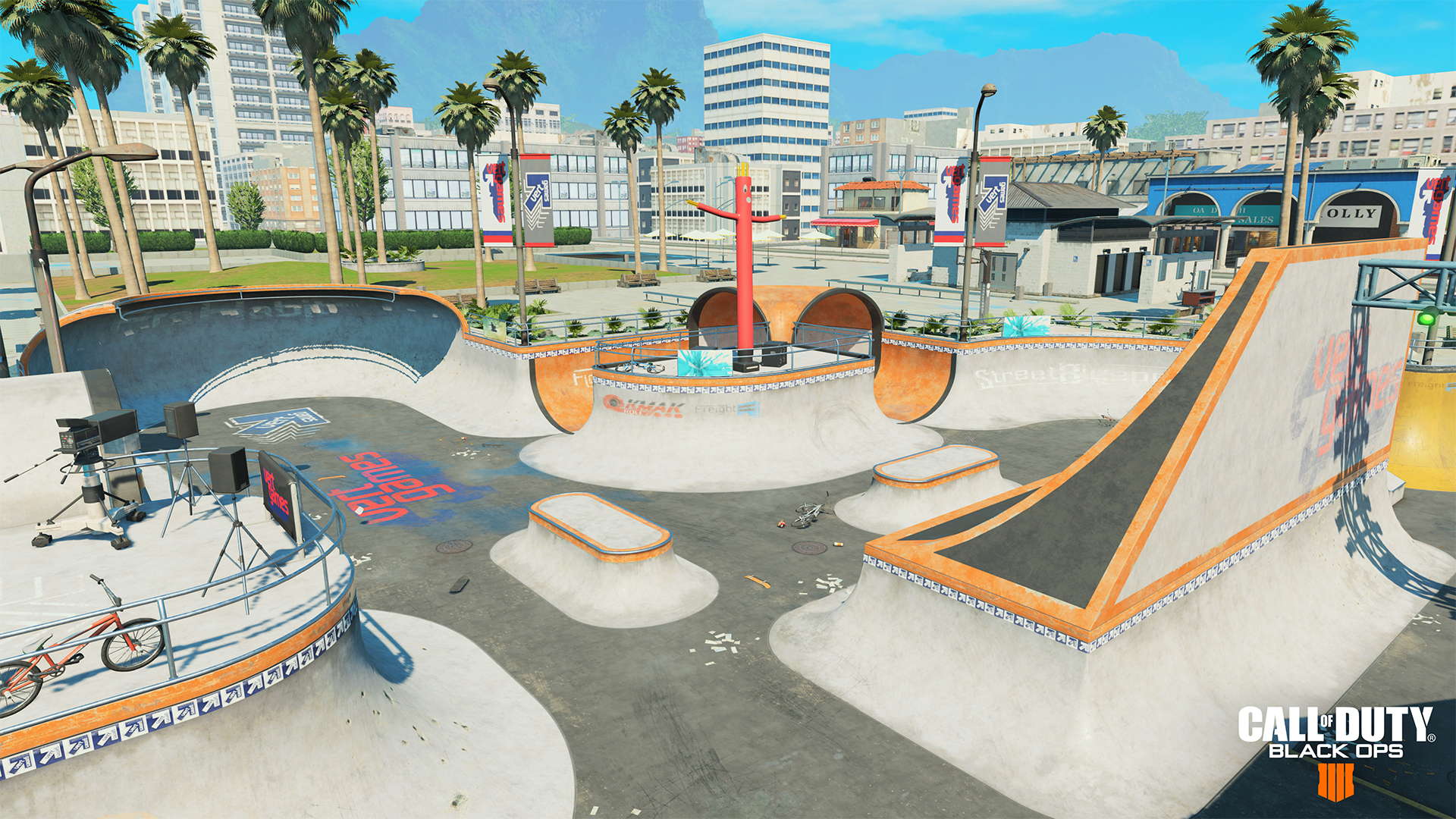 Remember that middle path? Well, in objective game modes, there’s usually an objective right in the middle of the indoor stadium.

That gives this path even more potential for deadly encounters. Should you have to trek through here, use the ramps and walls as cover from potential snipers, and don’t always take the shortest path in.

A team on the defense might want to set up a Barricade and a sniper right at the entrance nearest to the opposing spawn, so it may be worth considering a flank to the other entrance, or a breach through one of the other paths.

To prevent these flanks, it may be wise to use Torque’s Razor Wire and Barricade or stick someone with a weapon that excels at close range to watch these points of entry. Roaming around the map’s exterior could also be a viable strategy, as an impatient player might just rush straight into the center of the map on every life. 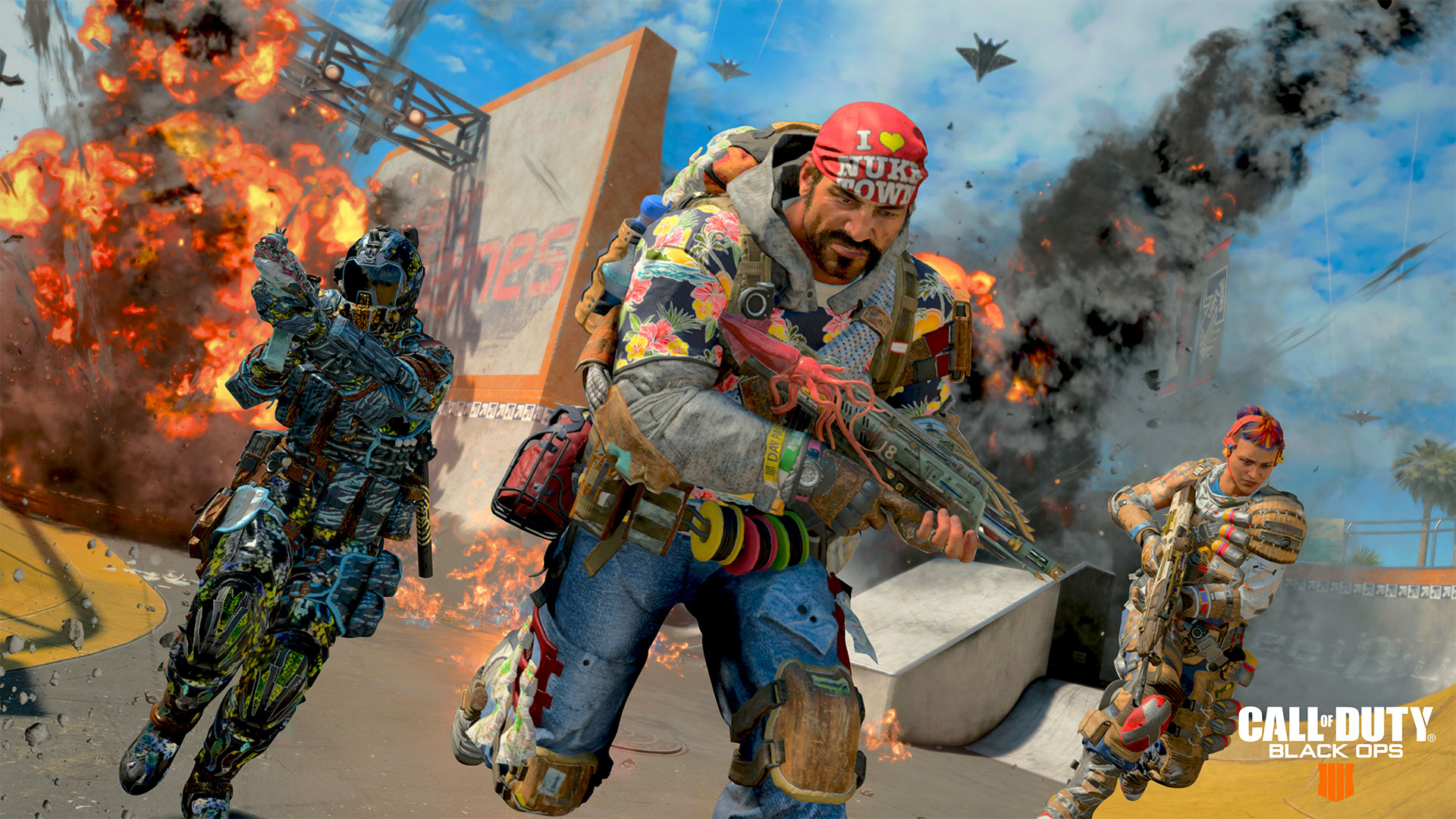 Other than the above tips, one of the best pieces of advice we can give for some dropping into Grind for the first time is to play with someone who’s experienced it before. Black Ops 2 lovers will feel right at home here on Grind, and those who do might just know the entire map’s layout like the back of their board.

We hope you have a wicked time on Grind and wish you the best of luck in shredding the competition.