Guns up and keep your head on a swivel. This Map Snapshot breaks down Shipment 1944, a franchise favorite coming soon to mobile.

Triple check your gear, soldiers, and make sure everything’s in working order. It’s time to put your weapons to the test in Shipment 1944, the fan-favorite Multiplayer map now available in Call of Duty: Mobile. Don’t expect some pleasant beach getaway — this is war at its fiercest.

Read on for an in-depth map overview of Shipment 1944 plus strategies and tips for staying alive and racking up kills through the chaos.

Shipment 1944 is as small as it gets, a tight and nearly symmetrical square forcing players into constant conflict in and around supply crates sitting on the beach. It’s a matter of seconds before the first engagement begins, and it’s nonstop after that.

The layout breaks down into two major areas: in the center where two intersecting lanes cross between the stacked middle crates, and the perimeter, a square border around the center.

Players can enter five of the crates, with four to each side of the perimeter and one in the middle. Two of the crates are clear and open on both sides, while the other three are closed on one end and hold barrels for slight protection inside. These are often occupied, especially the middle one.

Barrels extend from the outside corners of the central crates for cover when defending or peaking around corners. The perimeter corners provide some cover as well, with a vehicle in each corner on the right side of the map, and supply boxes and barrels on the left.

Finally, be aware that the open crates on the left and right sides of the map are slightly askew to their adjacent supply boxes, leaving small open wedges on either end. Enemies often occupy these areas, hoping for an easy kill against players dashing through the area.

Success on Shipment 1944 requires finding that right balance between defending against attacks and pursuing your own. Keep moving and strafing when you fight in the open, a tactic that is especially important here where you’ll often face off against several enemies at once — stand still and they’ll make short work of you.

Shotguns and SMGs work wonders particular in the middle but try not to stand directly in the center where you can be shot at from all four entry points, unless of course you’re capping the B flag in Domination. And if neither you nor a teammate are occupying the open center crate, check it and clear it of any enemies inside. Consider heading in there yourself to surprise passing hostiles but know that it won’t be long until the opposition comes hunting for you.

Assault rifles, LMGs, and even sniper rifles can all do well on the perimeter down the lanes. Shipment 1944 has a reputation for LMG users taking up position behind the two vehicles and firing round after round behind cover. If this is used against you, take another route and flank them or toss a grenade and blast them from behind. 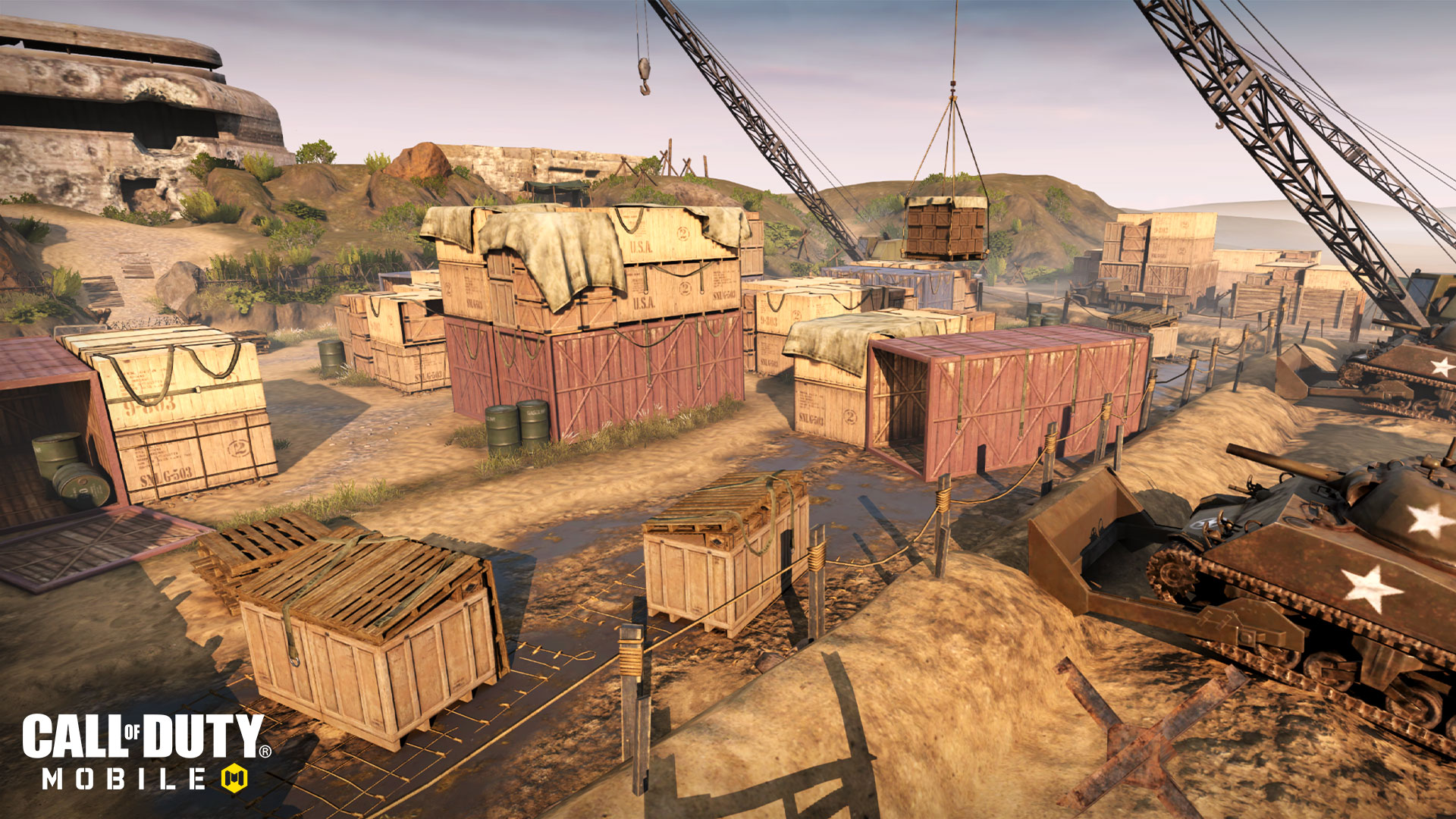 In such a small environment, it might seem that enemies are pouring out from all directions. The first step in mastering Shipment 1944, however, is getting a feel for where the enemy team is coming from so that you can face the threat head on instead of getting constantly flanked.

First and foremost, check where your teammates are. If they’re making inroads along a particular path, you can assume it’s safer there and follow along toward the fight or provide cover fire by turning another way. Check the mini-map in case those allies start disappearing, meaning you’ve got hostiles in your area.

Aim down sights when turning a corner so you’re ready to engage at a moment’s notice and learn when to back off and heal up when fighting against greater numbers. Get used to the attack and retreat motion when it’s needed and to find cover and protect yourself when the enemy comes calling.

As your map awareness improves, so will your ability to keep up the pressure and stay on the move. You’ll weave in and out of the center, terrorizing enemies in the middle lanes and clearing the perimeter. And when your Operator Skill is ready to use? Take advantage of the Skill and go on the offensive.

In the tight confines of Shipment 1944, Scorestreaks offer the chance to land some big kills. Air-to-ground attacks are the winners here, as most players will be laser focused on handling what’s directly in front of them. The MQ-27 Dragonfire, the Stealth Chopper, and the VTOL can cause absolute havoc.

Consider picking the UAV and/or Counter-UAV to help build score toward more expensive attacks. A UAV followed up by a multi-kill missile will shoot your score up considerably. Skip the Care Package and XS1 Goliath unless you’re sure you can stay alive until delivery. The Sentry Gun can be useful in the outer lanes, but it’s also easily disabled by enemy grenades.

Equip Hardline if you find yourself getting just short of obtaining the higher Scorestreaks, or even just to help earn them more quickly and more often.

It’s also wise to bring along a loadout with Cold-Blooded and a launcher in case an enemy player gets on a roll and starts calling in the big Scorestreaks. Countering the enemy’s air support can give your team the boost it needs to regroup and start calling in their own. 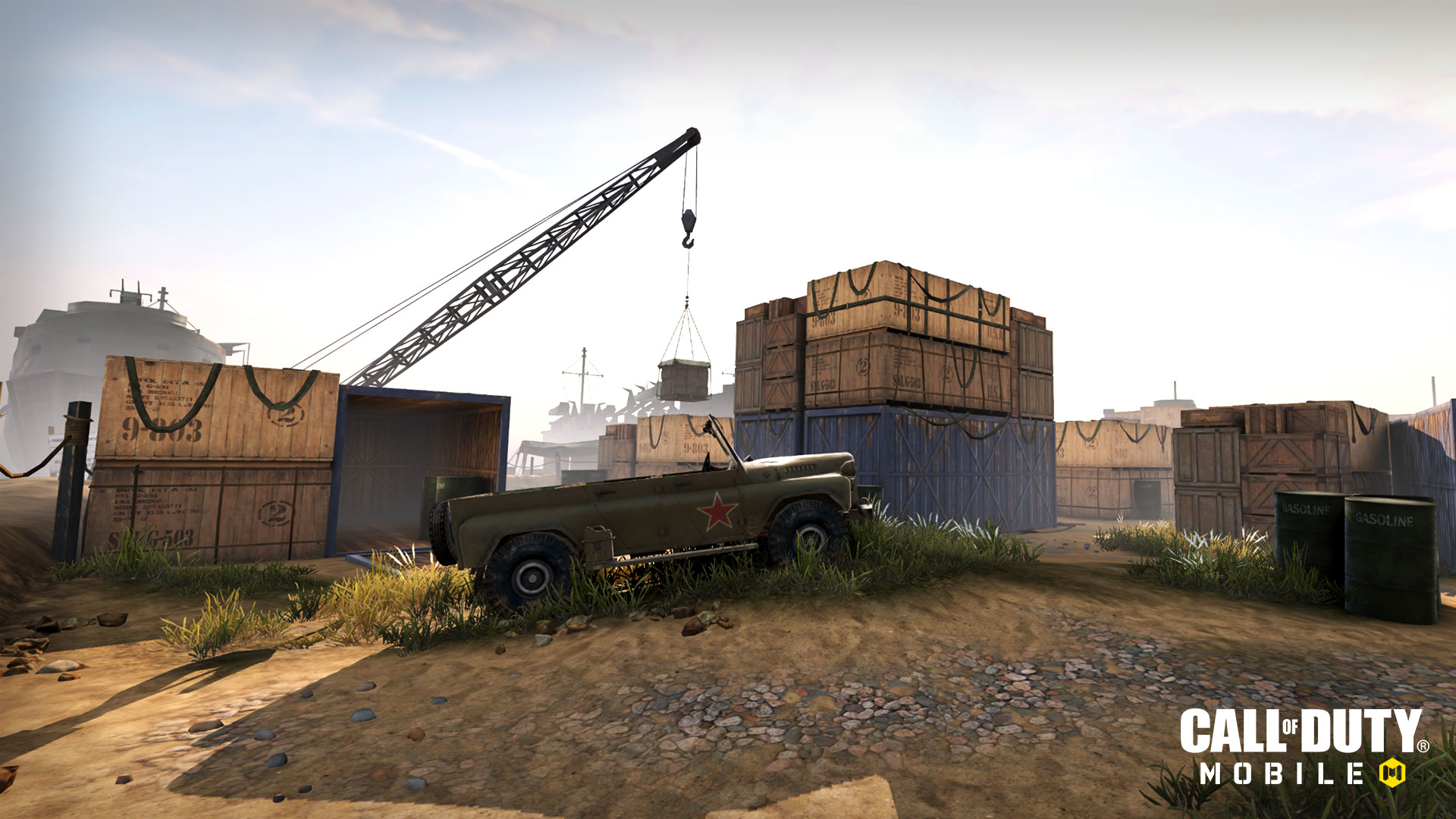 Objective modes add a whole new layer of chaos to Shipment 1944, and they’re a whole lot of fun, too. Think the map is small now? Wait until you’re rushing the B flag in Domination or defending the Hardpoint with enemies bearing down on you from all sides.

In both of these modes, the Trophy System can give you the extra resilience needed to survive just a little bit longer while capping a flag or holding the Hardpoint. The Smoke Grenade can be used to great effect, too, whether you use it to cut out a line of sight or even on your own position to confuse the enemy and force them up close.

In Kill Confirmed, consider an SMG or shotgun to keep your movement speed high. Stay on the move and collect those tags. This isn’t the mode for hunkering down unless you’ve got teammates ahead of you who can pick up the tags off the enemies you kill.

Whatever mode you play, stay aggressive and remain focused on the objective. It can be easy to lose sight of the main goal when you’re caught up in the slaughter. Don’t let that be your downfall.

10. Grab a shotgun and lock down the center! There’s no reason to be shy here, and what better way to learn a map than by heading right into the middle of the action. Plus, you’ll take out enemies in a shot or two before moving onto the next.

9. Don’t despair snipers! Stick to the outer corners and cover the perimeter and take down enemies rushing out from the middle crates. You can be even more useful in objective modes, providing cover fire for teammates.

8. If you haven’t already, complete the Perk Prodigy seasonal event challenge to unlock the new Quick Fix perk. Equip Quick Fix to regenerate health when you get gun, melee, and combat axe kills, keeping you in tip top shape from fight to fight. Pair it with Fast Recover to patch up those wounds fast.

7. Bring along a Trip Mine and plant it in one of the three partially enclosed shipping crates before moving on. It’s always satisfying to blow up enemies rushing into what they think is a safe spot.

6. Lost track of the enemy? From the outside corners, get some cover and adjust your view to take in the middle and the two nearest side paths, giving you wide map coverage. It won’t take long to find out where they’re coming from.

5. Like the chaos of the middle? Equip the Katana Operator Skill earned during The Forge season, drop a Smoke Grenade right in the center, and make quick work of any hostiles foolish enough to try and take you on.

4. Once the new update is live head to Gunsmith and consider customizing your weapon with attachments that improve handling speed. The faster you can aim down sights and the more quickly you can move while firing, the better. It can’t hurt to increase your reload speed, either.

3. Use your grenades. At the very least, toss a lethal into the middle for the chance to inflict damage or earn a kill on enemies passing through. Grenades are also helpful in rooting out enemies stubbornly sticking behind cover.

2. Having trouble staying alive long enough to call in your Scorestreaks? Consider the Hardline perk to help you earn those streaks faster, then use them to devastate the enemy

1. Enjoy! Shipment 1944 is an absolute classic Multiplayer map that has been featured across multiple titles, and for the first time you'll be able take it with you wherever you go. Chaos on a whim. Now that’s a good time.